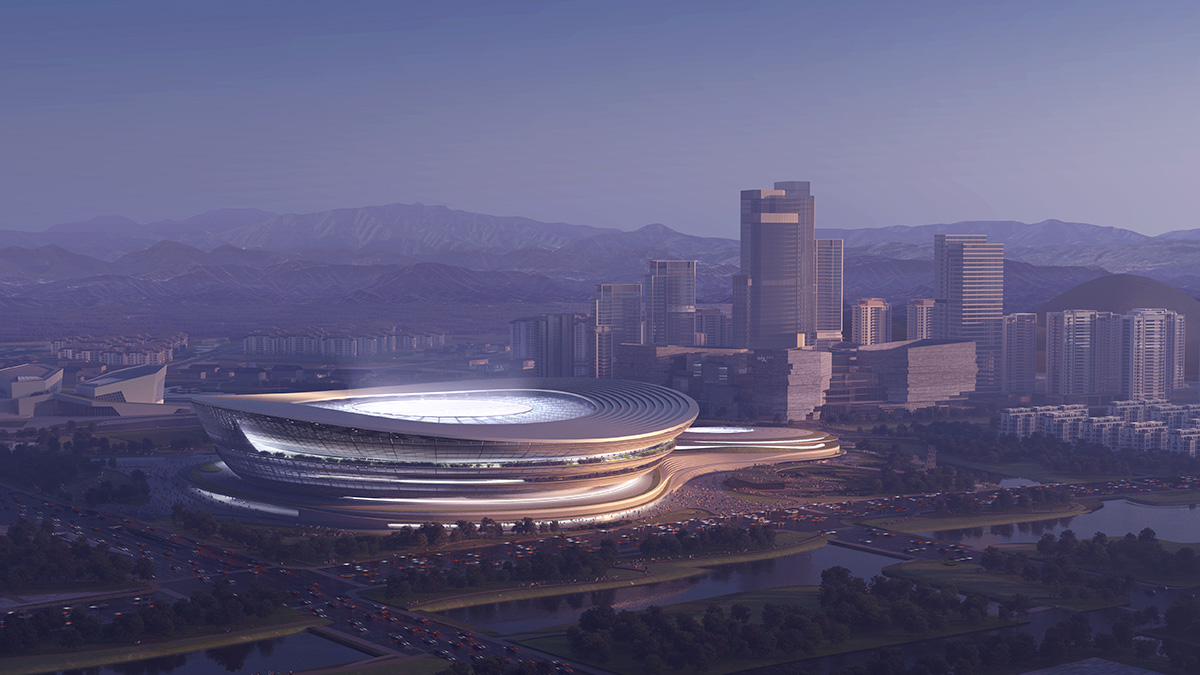 Zaha Hadid Architects has revealed design for a new sports complex for Hangzhou in China.

ZHA has recently won a competition to design the new Hangzhou International Sports Centre in China, featuring rounded surfaces with "stratified and geological appearance" in solidity.

Video by Atchain, courtesy of ZHA

The three main volumes are placed on a layered podium integrated with landscape areas and grand stairs that become part of the city.

Located within Hangzhou’s Future Science and Technology Cultural District, the sports centre brings a new riverfront park and public plazas with direct access to Lines 3 and 5 of the city’s expanding metro network.

Hangzhou is one of the world’s leading centres of e-commerce, and is home to many of China’s largest technology companies which attract IT professionals and entrepreneurs from across the country to live and work in the city. 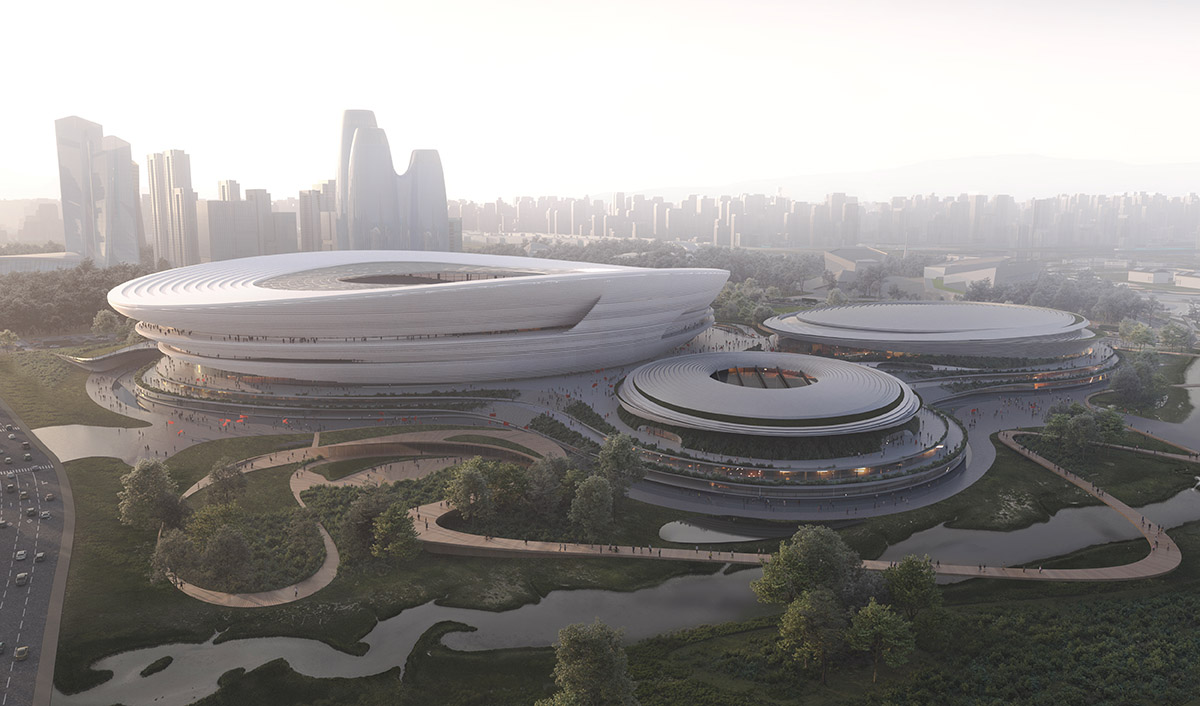 Envisioned as a compact design for each venue, the venue's orientation and composition together allow almost to be used half of the site, while the rest of spaces are transformed into new public spaces for the city.

The design is an integral part of the district’s urban plan and the natural landscapes along the riverbank, the centre also incorporates new parks and gathering places for events, recreation and relaxation. 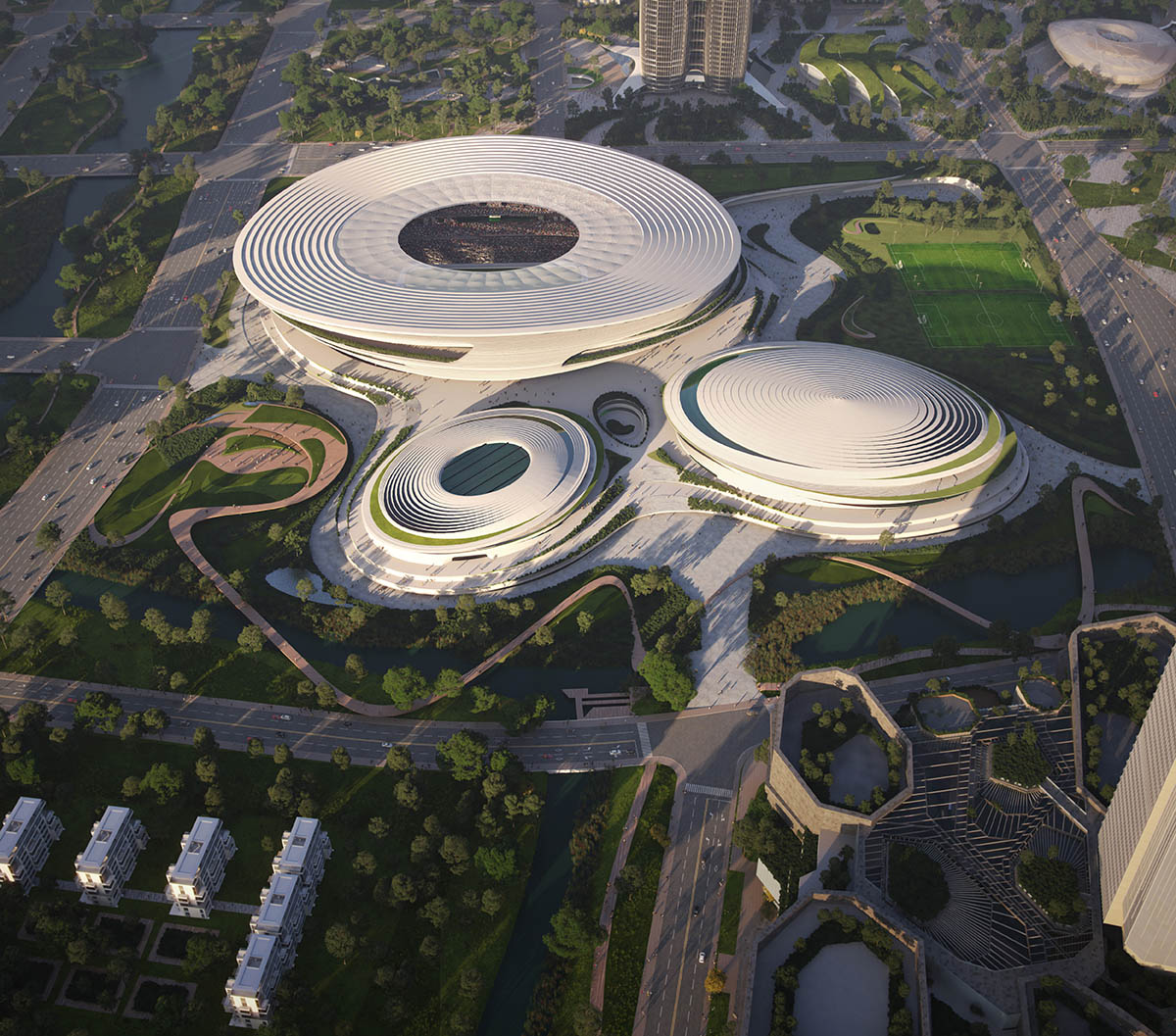 The "largest" football stadium within the venue

The sport venue houses a 135,000-square-metre football stadium, which is the largest venue within the centre.

While the football stadium is situated on the eastern side of the new park to face the city, the indoor arena and aquatics centre, connected by the centre's layered podium, are located to the west and south of the stadium.

To create this layered form, ZHA is inspired by the terracing of the tea farms on Hangzhou’s surrounding hillsides. 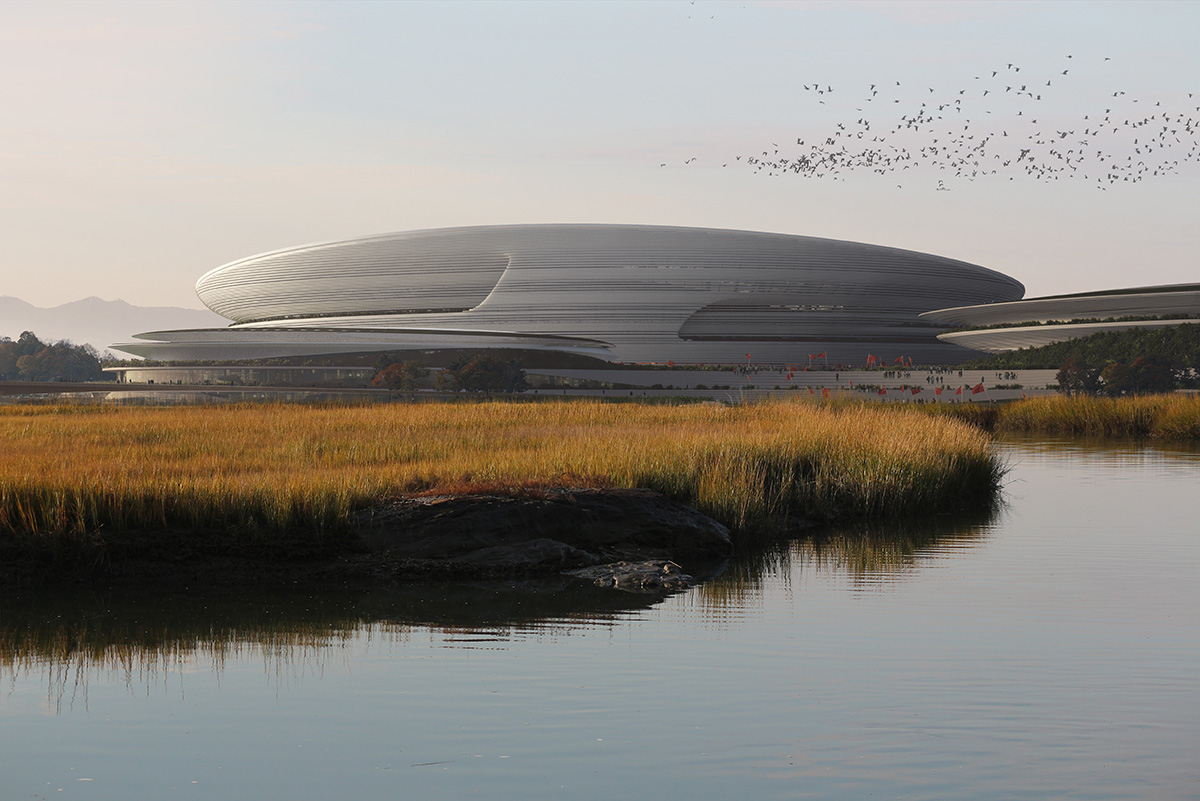 The striated 45,000-square-metre podium houses the sports centre’s ancillary facilities that are shared between the venues including training and fitness halls, locker rooms, offices as well as shops, restaurants and cafes overlooking the podium’s courtyard and terraces.

"Unlike the solid façades of most stadiums, the façade of the Hangzhou International Sports Centre’ stadium is open to the exterior with louvres sheltering terraces that host a variety of food and beverage outlets offering panoramic views across the city," said Zaha Hadid Architects.

ZHA implements all design principles and elements according to FIFA standards. For instance, the stadium’s seating bowl is configured to bring spectators as close as possible to the field of play and ensure excellent, unrestricted views from every seat.

Thanks to this configuration, it is expected to create "an intense matchday atmosphere for players on the pitch and fans seated throughout the stadium."

"These programmatic requirements define geometries that are expressed as undulations within the louvred façade," ZHA added.

Due to the louvred façade of the venue, it removes the boundary between interior and exterior, as the team noted.

"The louvres’ materiality and detailing give the stadium a stratified, geological appearance of solidity when viewed from nearby," the firm continued.

"When viewed from a distance, the louvred façade becomes transparent, connecting the public spaces beneath the stadium’s seating bowl with the city." 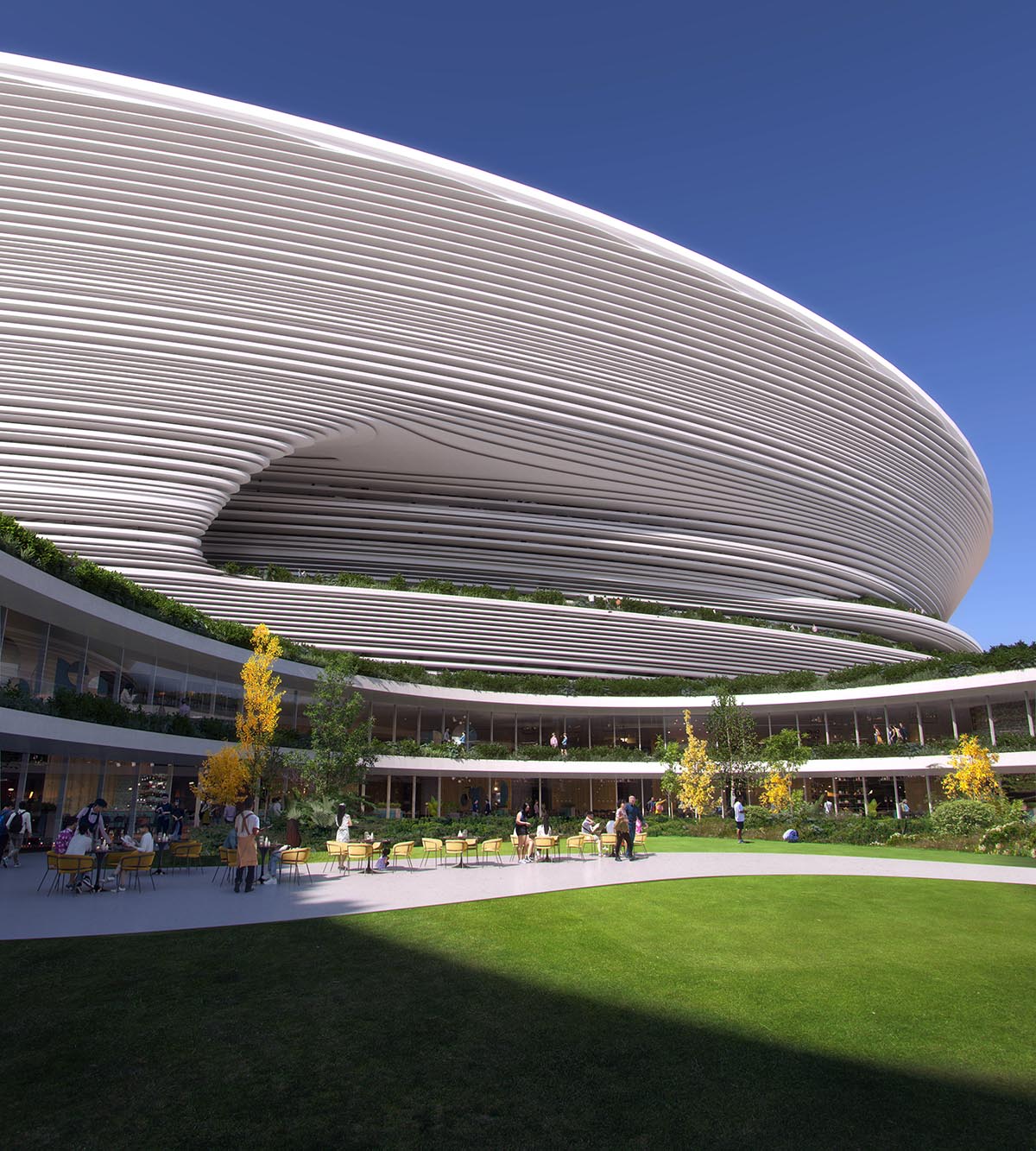 The 74,000-square-metre indoor arena, with a 19,000-seat capacity, can operate independently to the stadium and is designed with maximum operational flexibility to host many of China’s most popular spectator sports such as basketball in addition to large music and cultural events.

The 15,000-square-metre aquatics centre, situated on the western edge of the park, incorporates two 50-metre pools suitable for competitions, training and teaching at all levels from beginner to elite swimmers and divers. 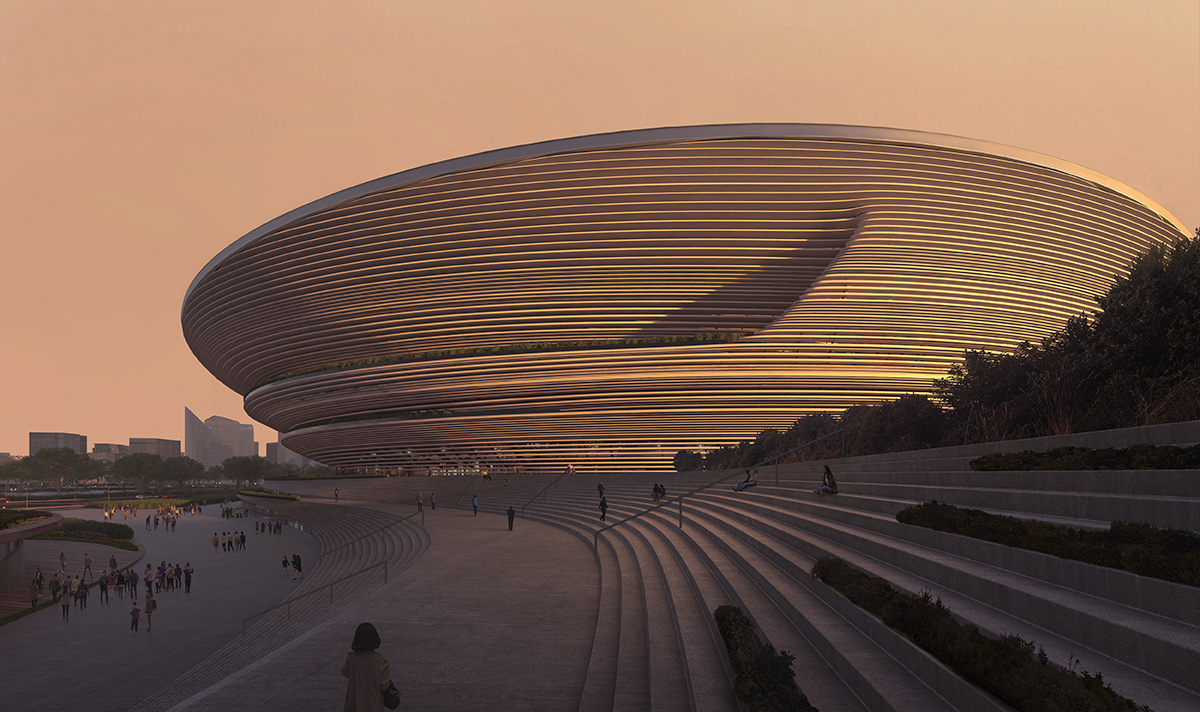 "Accommodating district-level competitive events with up to 800 spectators, the pools can also host local schools for lessons, ensuring many thousands of children each week will learn the essential life skill of swimming," the firm added.

Since the sports venue is located within the warm temperate climate of Hangzhou, the complex has been designed according to the highest 3-Star rating of China’s Green Building Program.

Each venue will provide optimal conditions using natural hybrid ventilation most of the year, as the team stated. 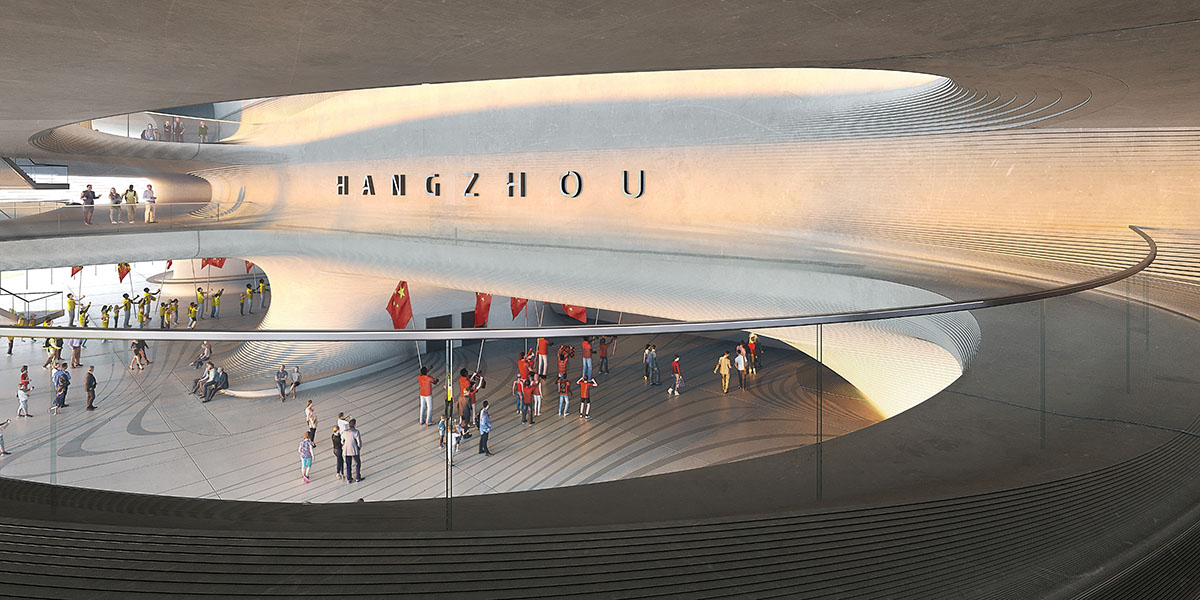 "Annual solar irradiation analysis has determined the composition of the façade’s external louvres while photovoltaics will harvest solar power for all venues. Ground heat exchange and recovery systems will ensure the most efficient operations of all facilities," added ZHA.

The landscape design establishes wetlands along the riverbank that are integral to the district’s drainage network. Collecting and channelling rain and grey-water for filtration and re-use, this network uses aquatic flora and fauna native to the region to naturally remove contaminants. 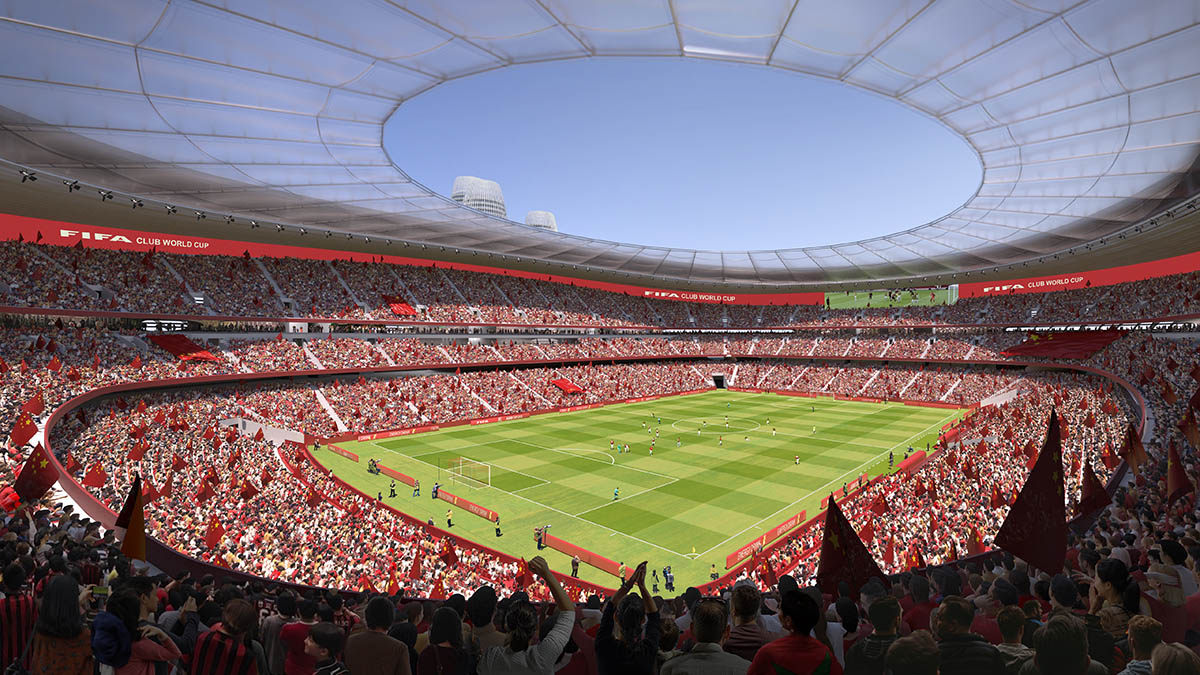 In order to avoid using too much embodied carbon throughout the project, ZHA uses optimization processes to reduce the amount of materials required for the structure and these processes are integrated with local supply chains and procurement systems that have been developed to increase the recycled and recyclable content.

ZHA explained that "in contrast to the single-use programming of most large stadiums that only welcome visitors on match days and act as an obstruction to the city’s urban fabric when not in use, the many varied sporting, recreational and leisure facilities of Hangzhou International Sports Centre, in addition to its public plazas and riverfront park, ensure the centre will be a popular gathering place for its community throughout each day and evening." 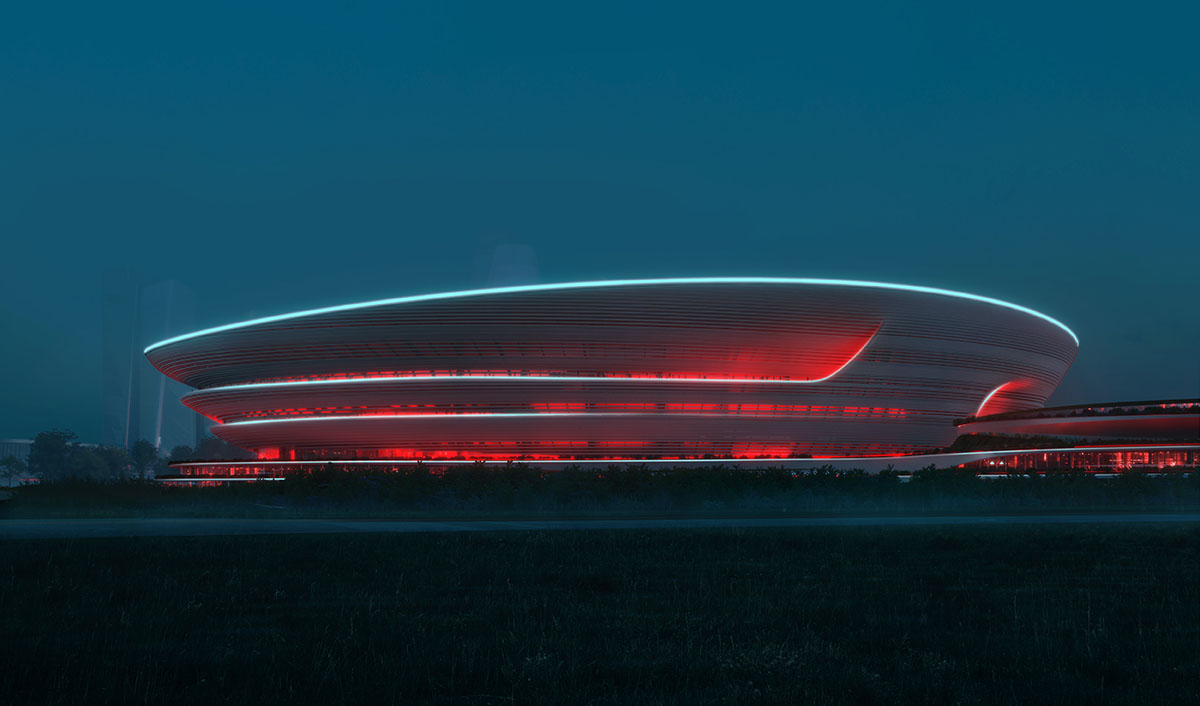