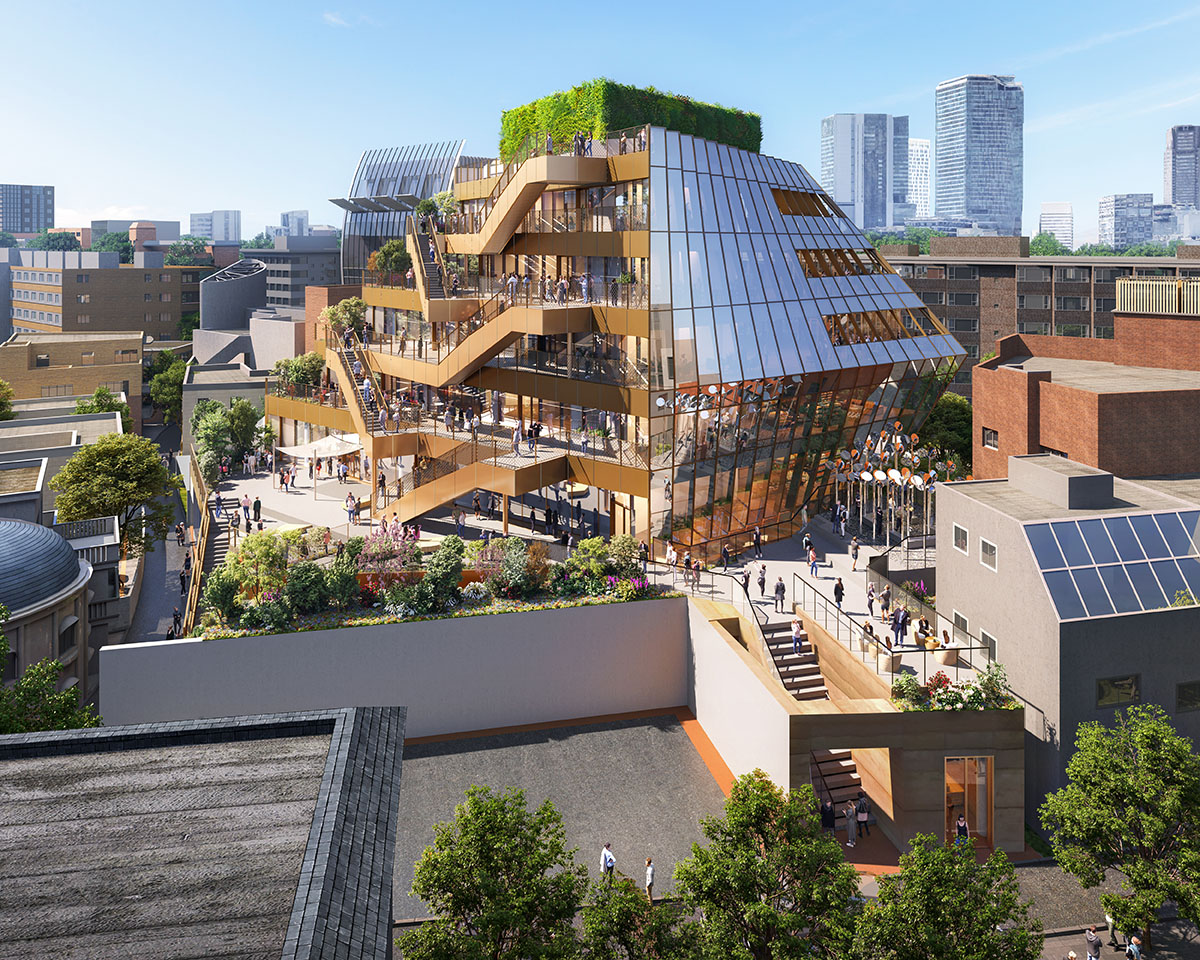 OMA has revealed design for its new mixed-use scheme that features a twisted and sculptural expression in Tokyo, Japan.

Called Harajuku Quest, the 84,000-square-feet (8,082-square-metre) complex is being designed according to the contextual parameters driven by "pinching and pulling" approach to create a sculptural expression.

Designed by Shohei Shigematsu and OMA New York for NTT Urban Development, the building consists of retails spaces on the first three floors, while dining spaces are placed on the upper three floors. The rooftop is dedicated to a terrace wrapped by a large green wall at the center.

OMA has begun construction in October and the firm plans to complete the project in February 2025. 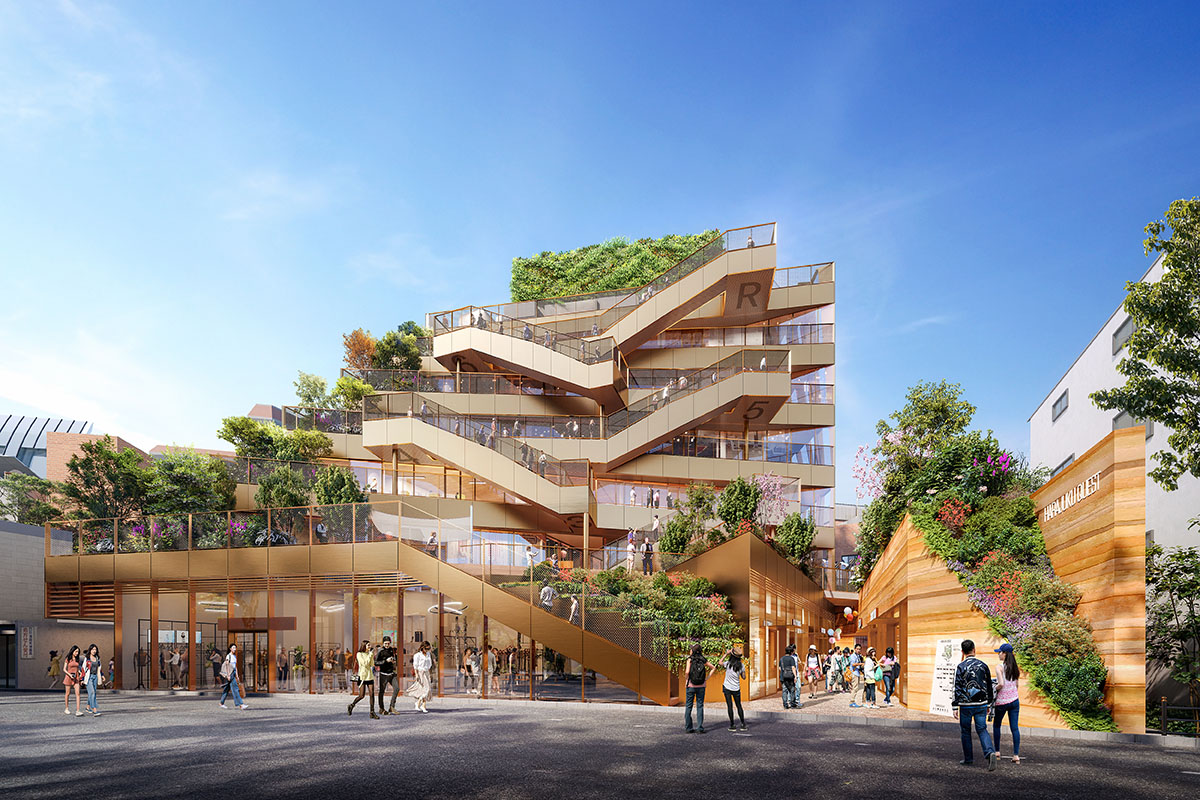 Acting as a binder of the two areas of the site: Omotesando and Oku-Harajuku–a short distance away from major public destinations including Yoyogi Park, Meiji Jingu, and Harajuku Station–Harajuku Quest is a new phase of NTT’s effort to transform an area of Harajuku with energetic, urban life.

Once complete, Harajuku Quest will be the firm’s first ground-up mixed-use building in Omotesando. 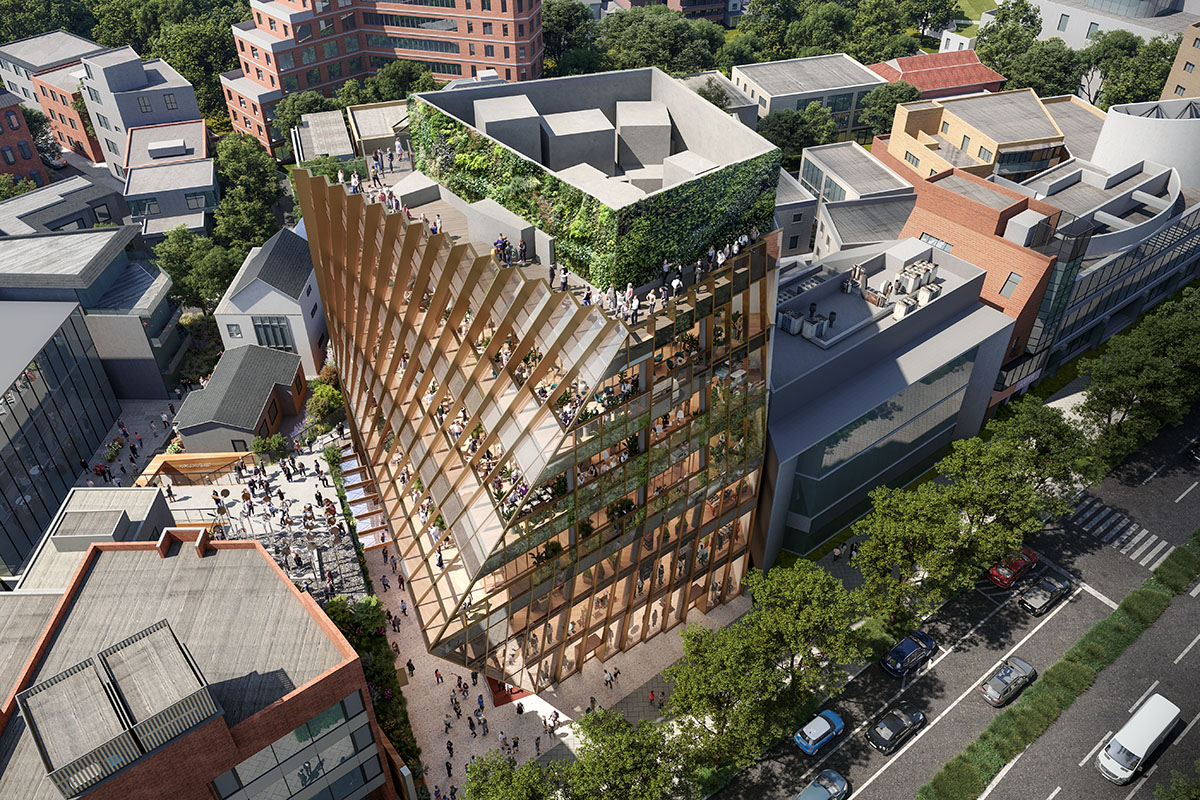 "The project builds upon NTT’s “With Harajuku”, opened in 2020, and a larger urban development to facilitate a new flow of people through a series of alleys, squares, and commercial zones for informal encounters and exchange," said OMA in its project description.

The new scheme is aimed to invite people and to be opened to activities from both Omotesando and Oku-Harajuku, while connecting the two areas of the site for the first time. 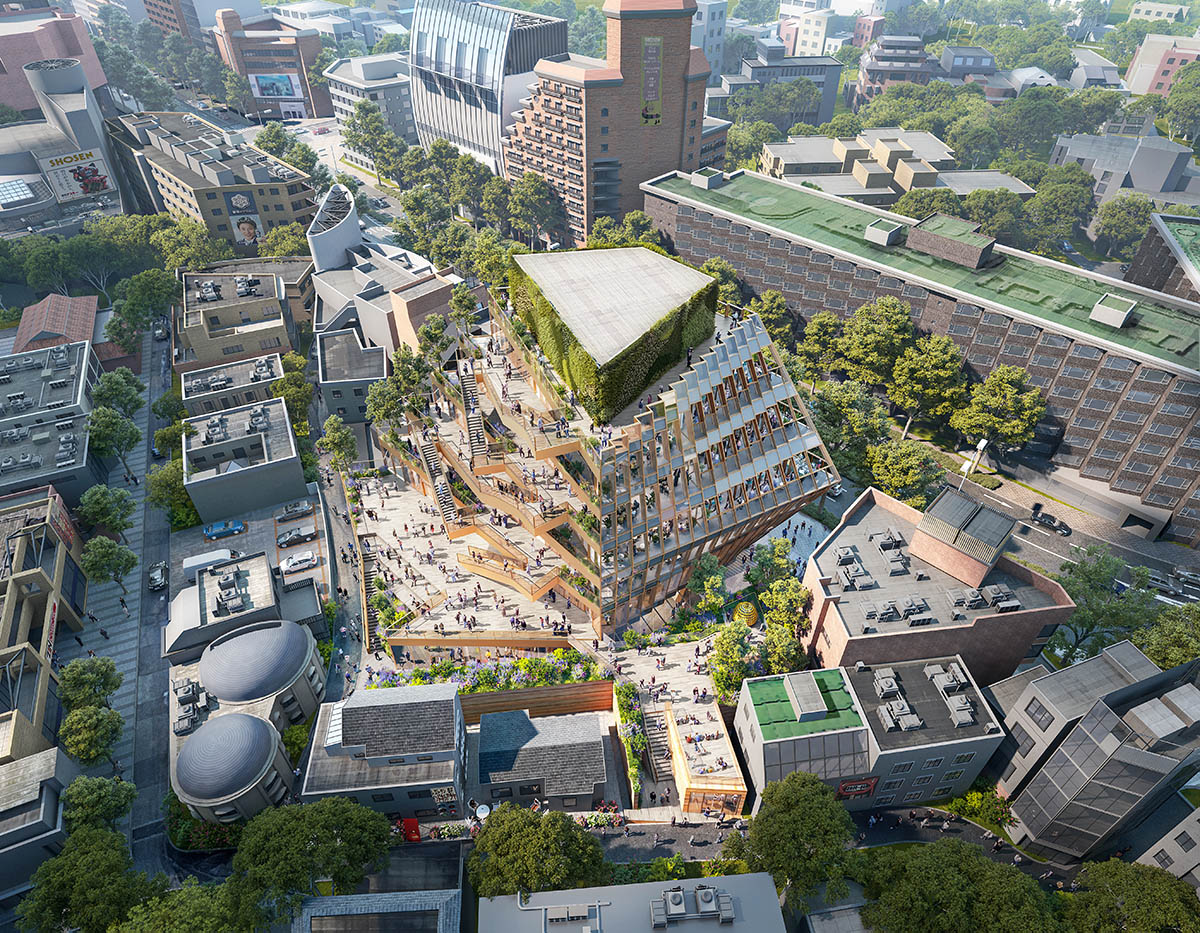 "The conjunction of Omotesando and Oku-Harajuku embodies a duality of urban context as well as Tokyo’s fashion and retail culture," said Shohei Shigematsu, OMA Partner.

"It was essential for the new building to bridge the two areas and express two stories."

"Like two sides of the same coin, a single building conveys alternate personalities, connected by a new public corridor."

"Harajuku Quest acts as both a visual and programmatic convergence point of Omotesando and Oku-Harajuku—a gathering place where visitors can experience the activities and aura of global fashion and local cultural scene simultaneously," Shigematsu added. 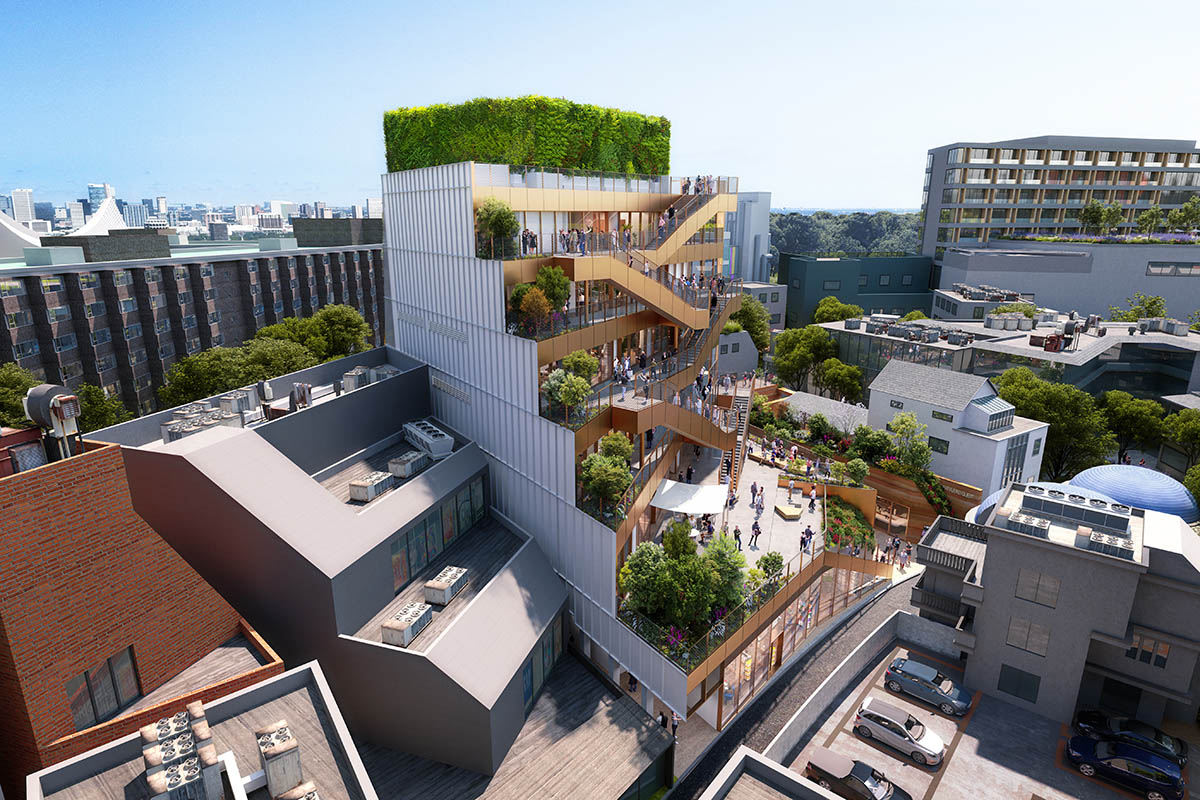 "Omotesando presents a rare axial thoroughfare in an area predominantly defined by winding, non-linear streets, with a strong urban identity defined by zelkova trees, wide sidewalks, and string of flagships of well-recognized global brands," the firm added as related to the context.

"The growing need for expressive branding in retail architecture has contributed to the growth of building scales on the street over time, with stores emphasizing distinct identities only toward the main axis."

"Since the 1970’s, the neighborhood has cultivated a distinct youth culture and creative movement with a global recognition and influence on streetstyle fashion," the firm continued. 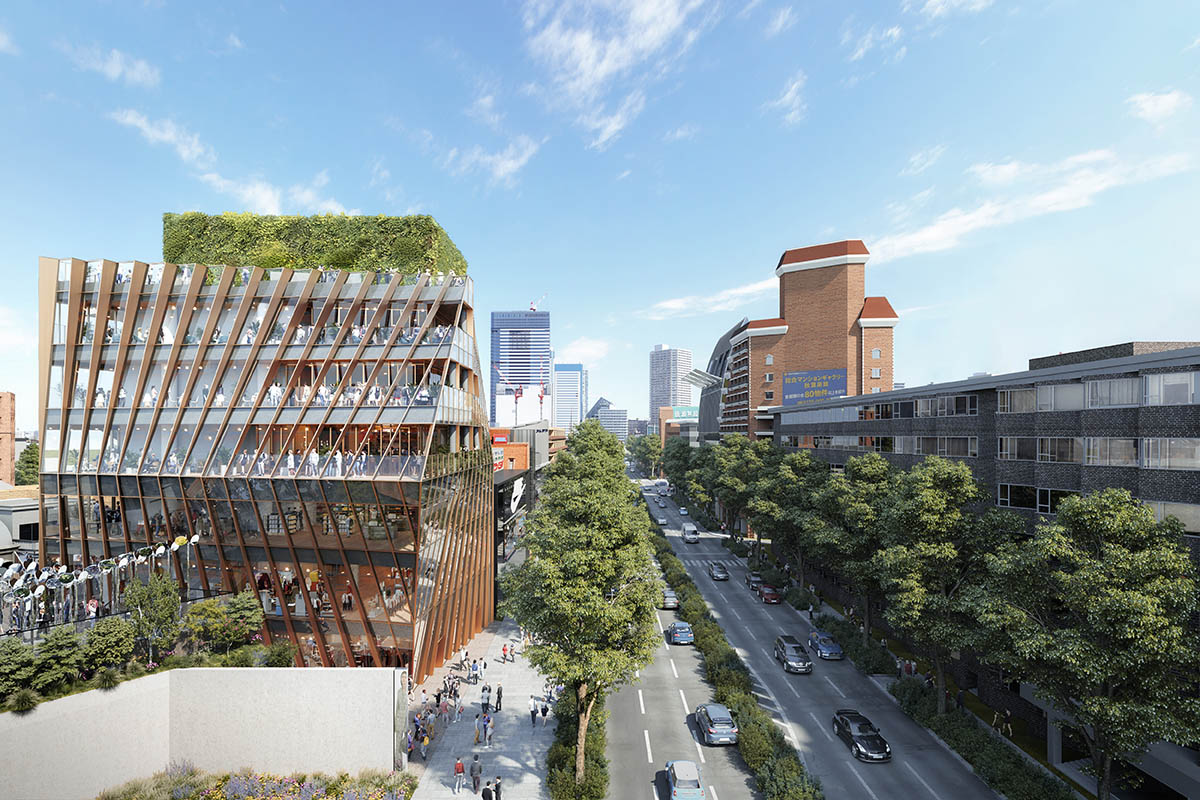 Considering the two different characters of contexts, the studio created a single expression that is shaped by two different manipulations within the site’s zoning envelope.

"Pinching and pulling" are the key design components that define the sculptural expression of the building toward Omotesando and stepping and fanning for an inhabitable façade toward Oku-Harajuku. 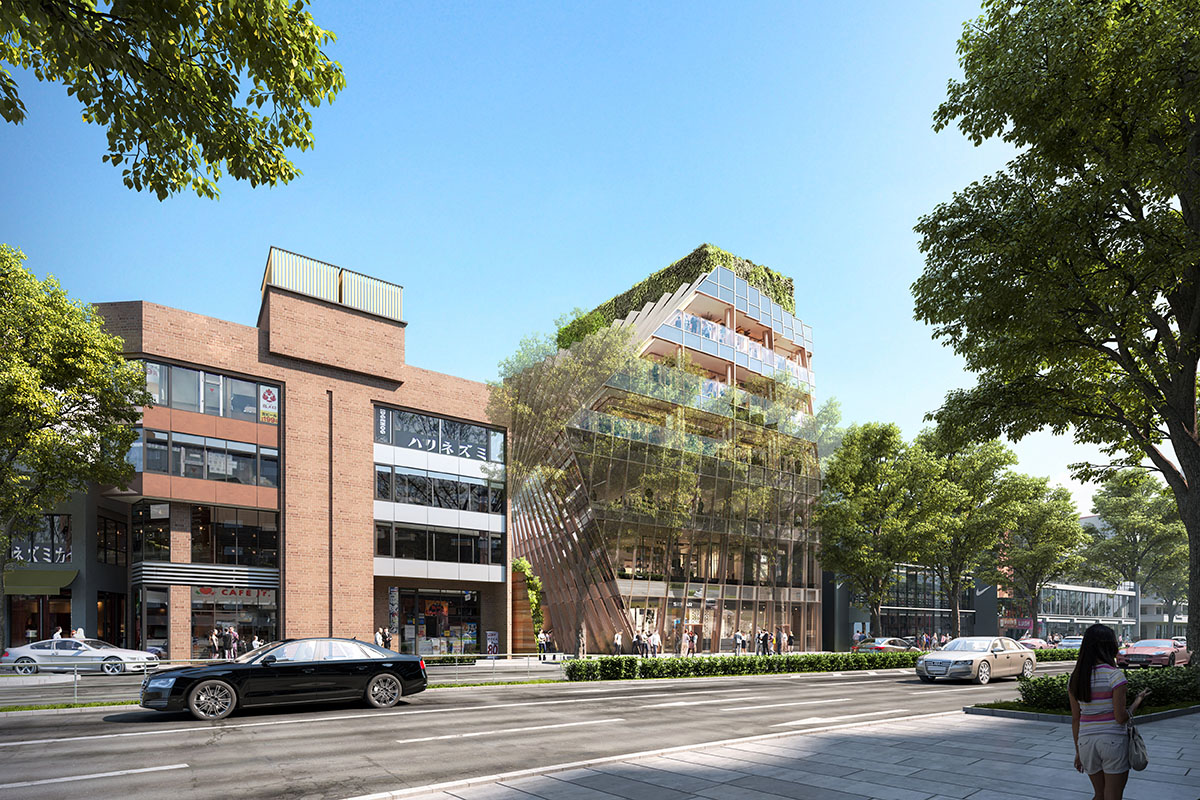 The building offers different perspectives from each side, while "a monolithic, transparent" façade rises towards Omotesando. It has a setback at the top to bring light in and set back at the ground to make a funneling pedestrian passage to Oku-Harajuku.

The scheme, defending "an expansive verticality", also creates a series of human-scale terraces rising in steps and incorporates variegated, open spaces for programs to spill out toward Harajuku. 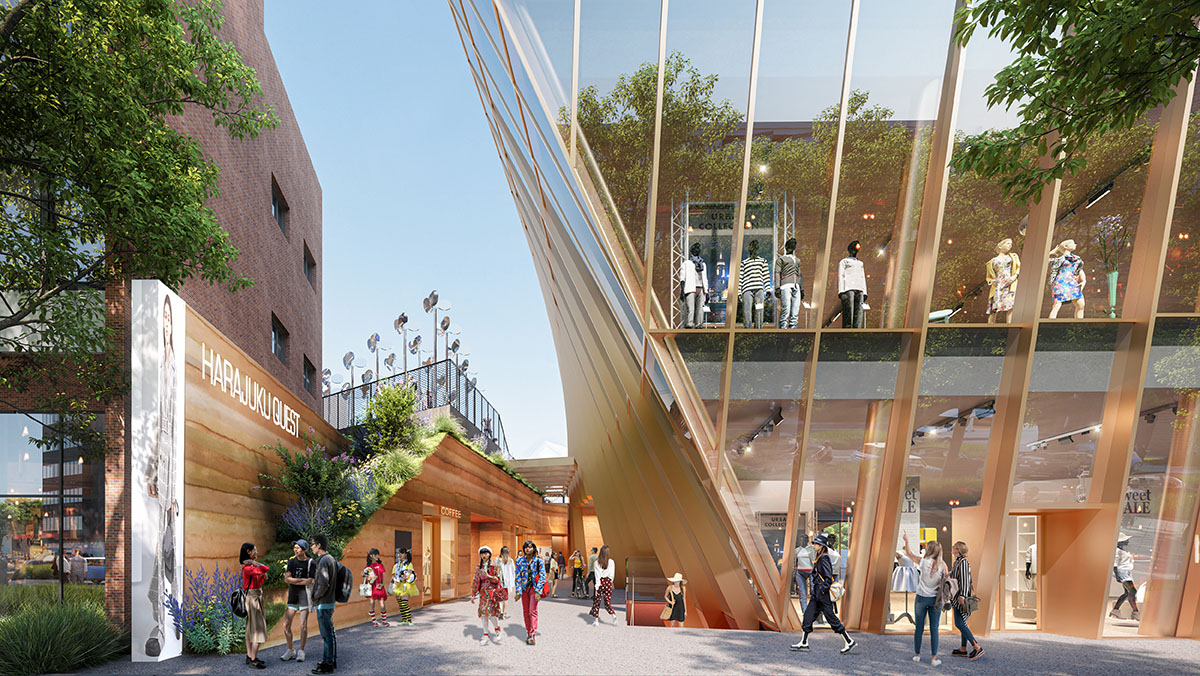 On the second level terrace there is a public datum that is expanded to form a large plaza for cultural programs and gatherings, extending neighborhood life into the site and the building activity beyond the traditional retail experience. 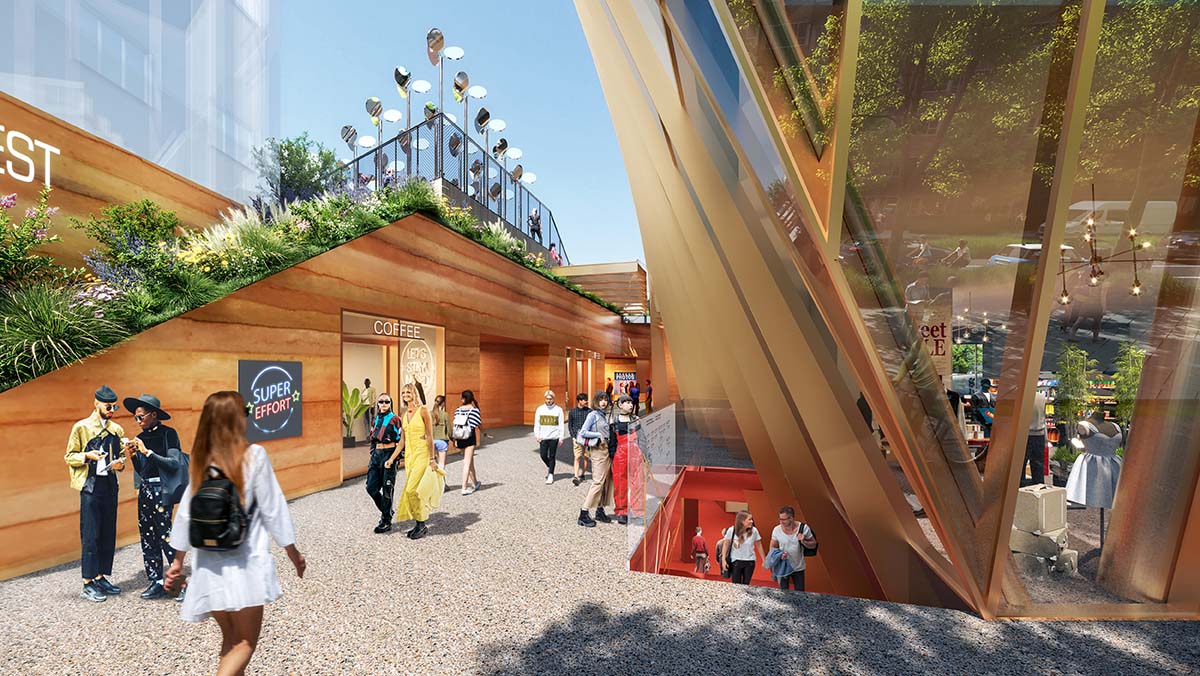 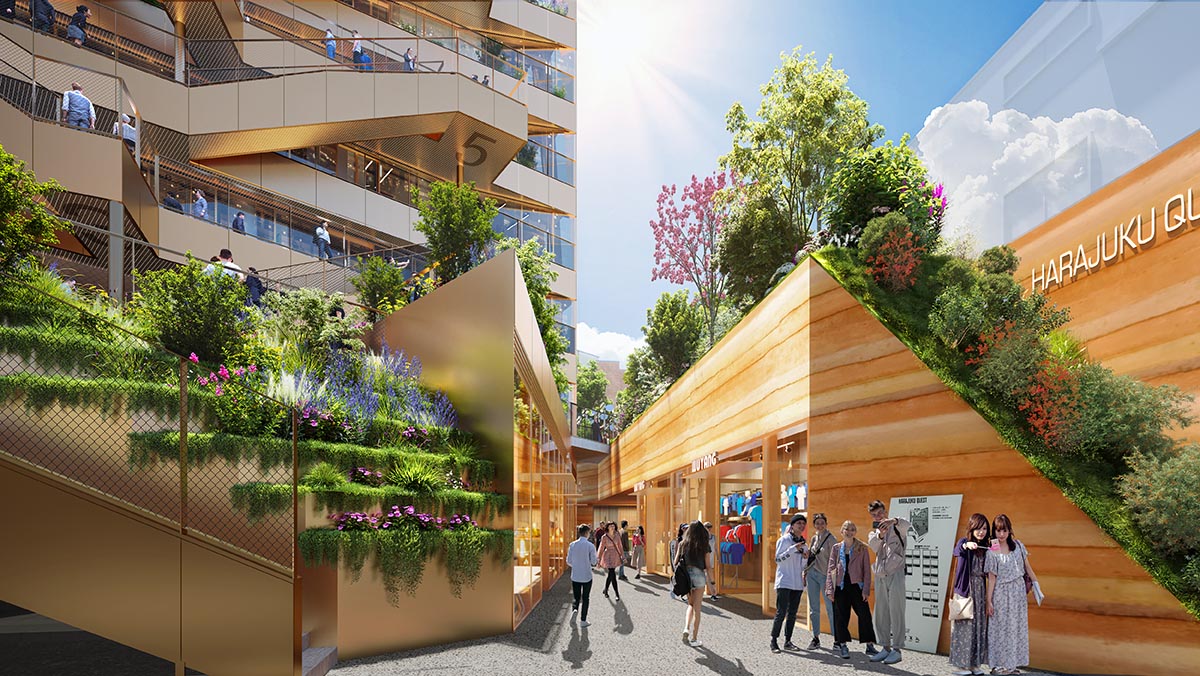 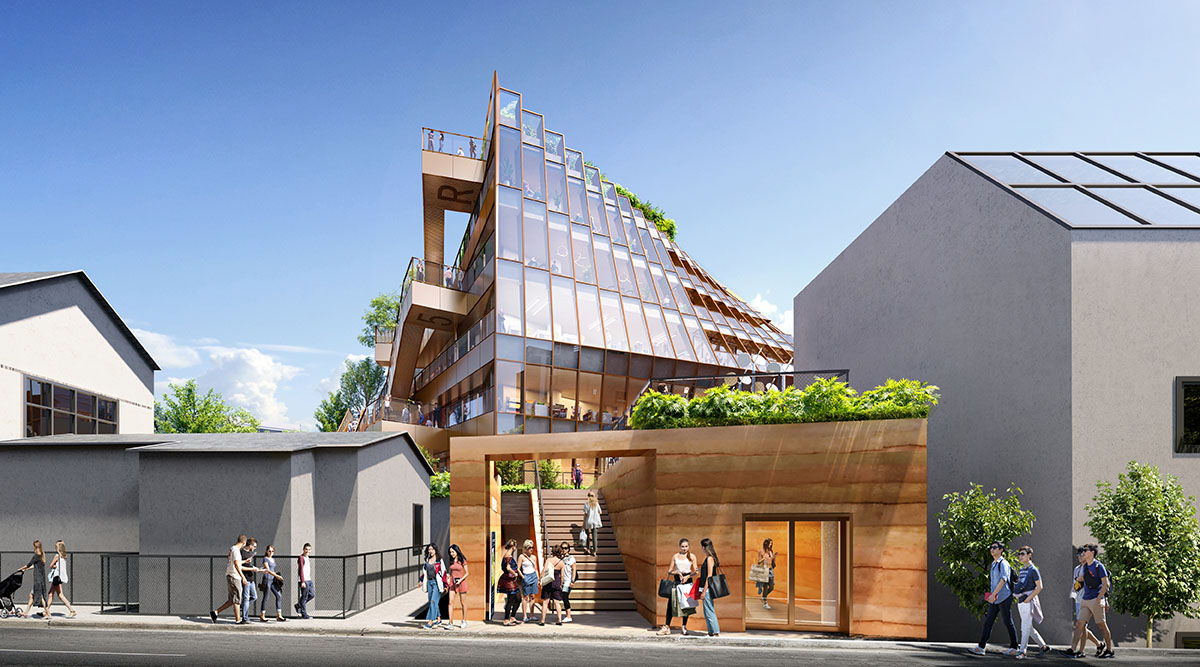 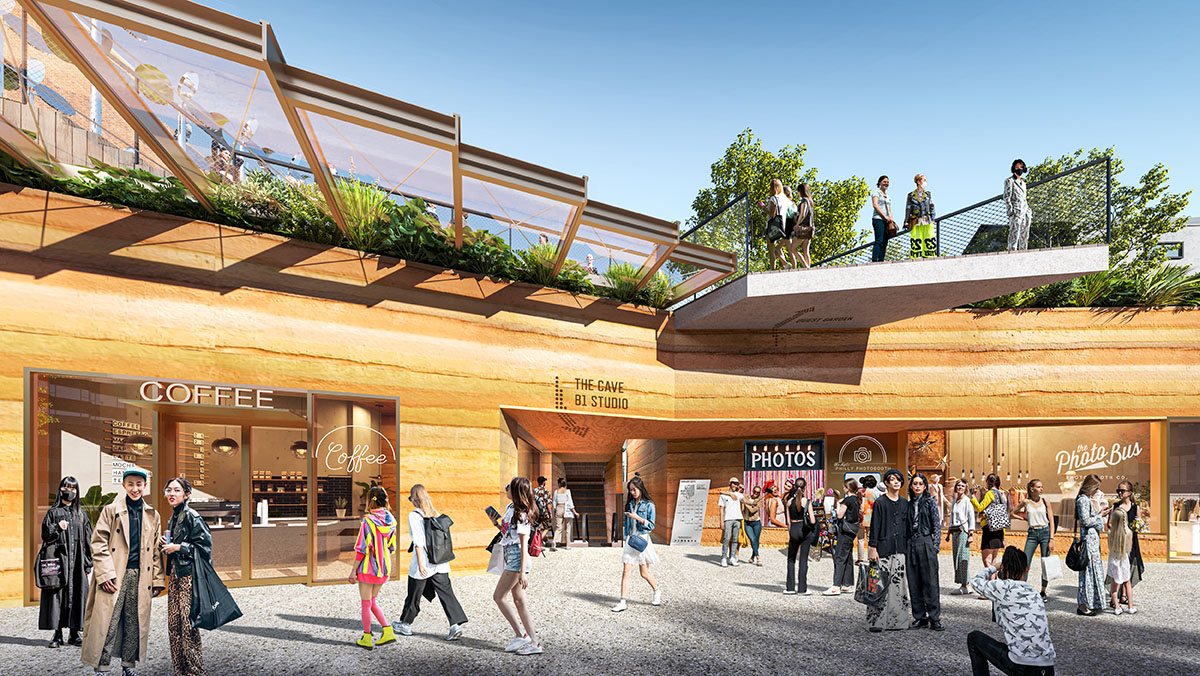 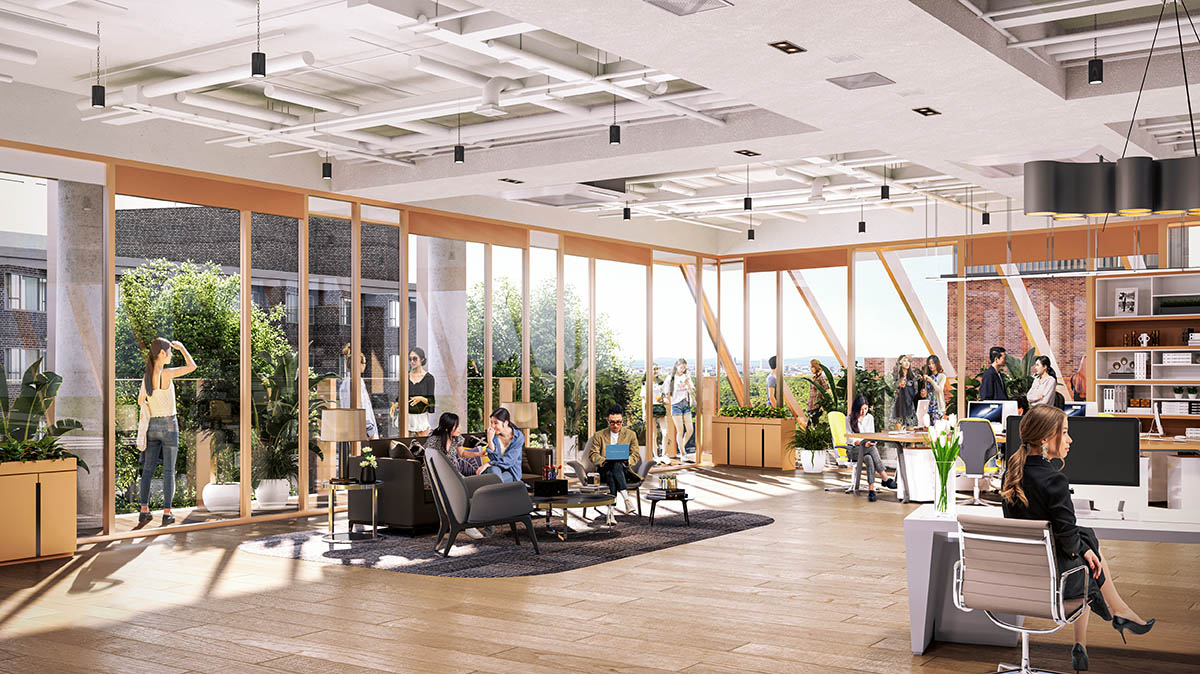 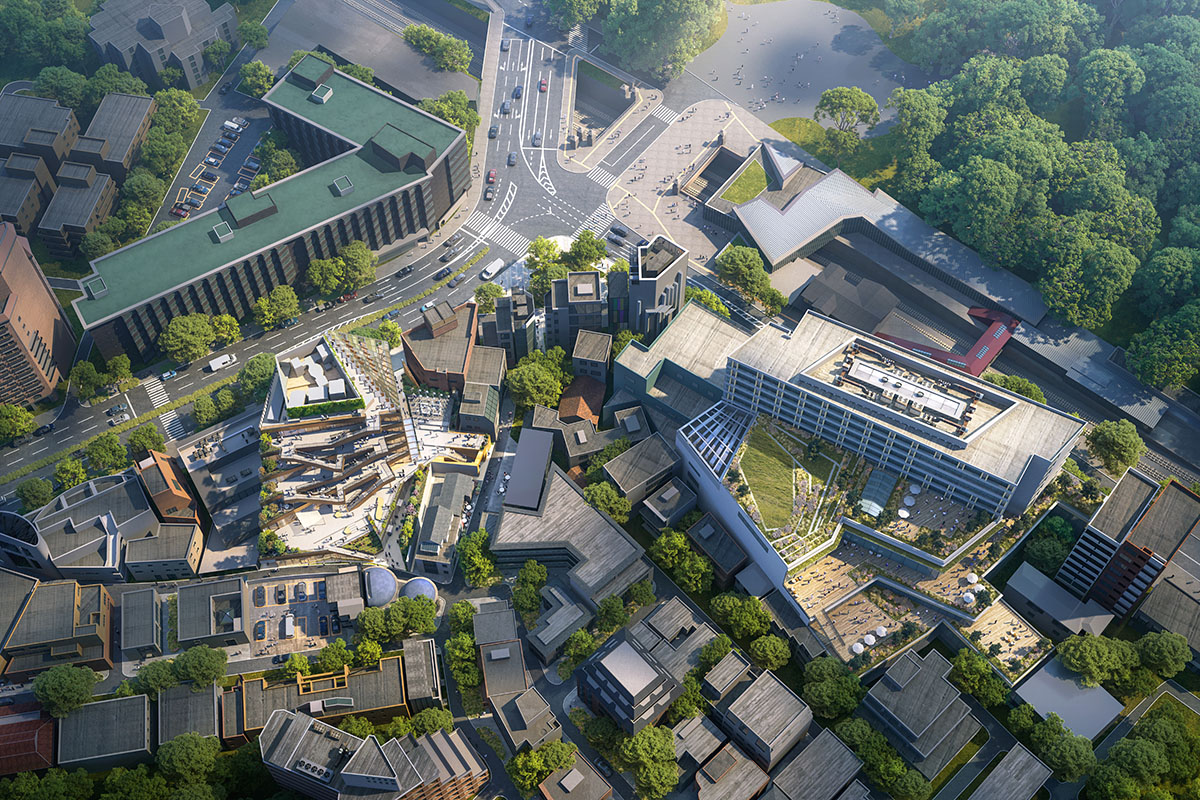 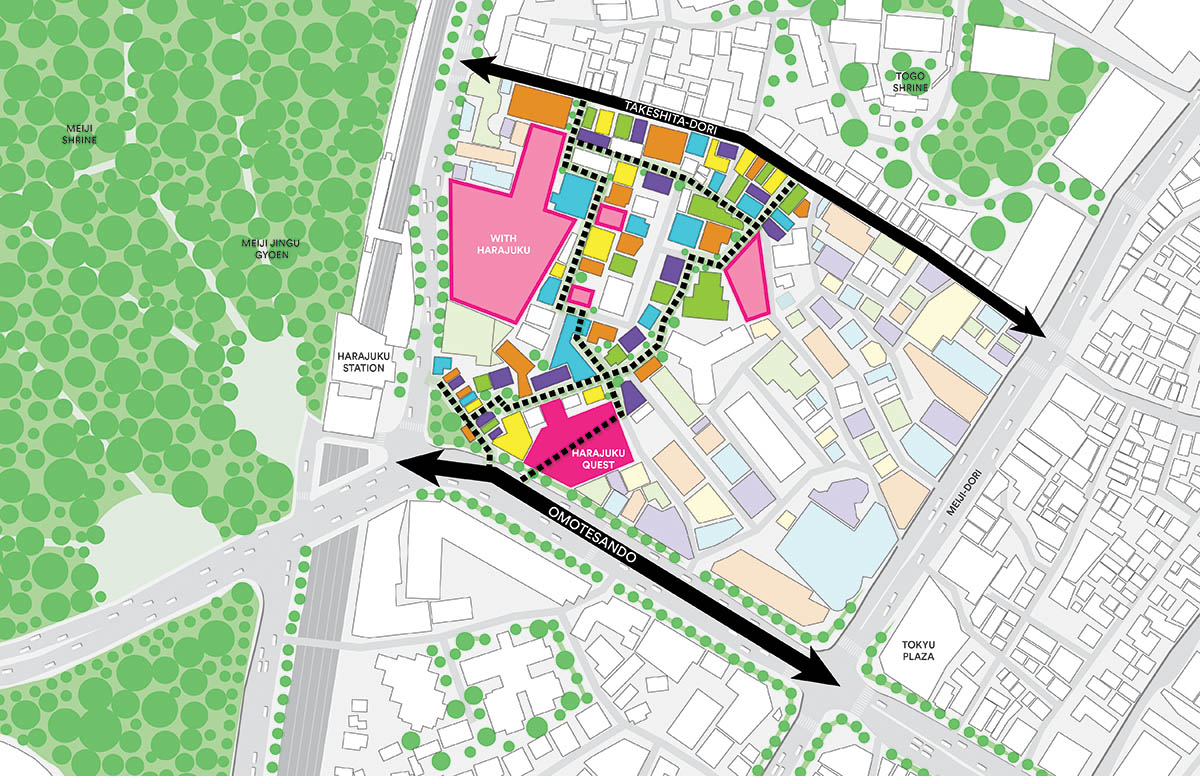 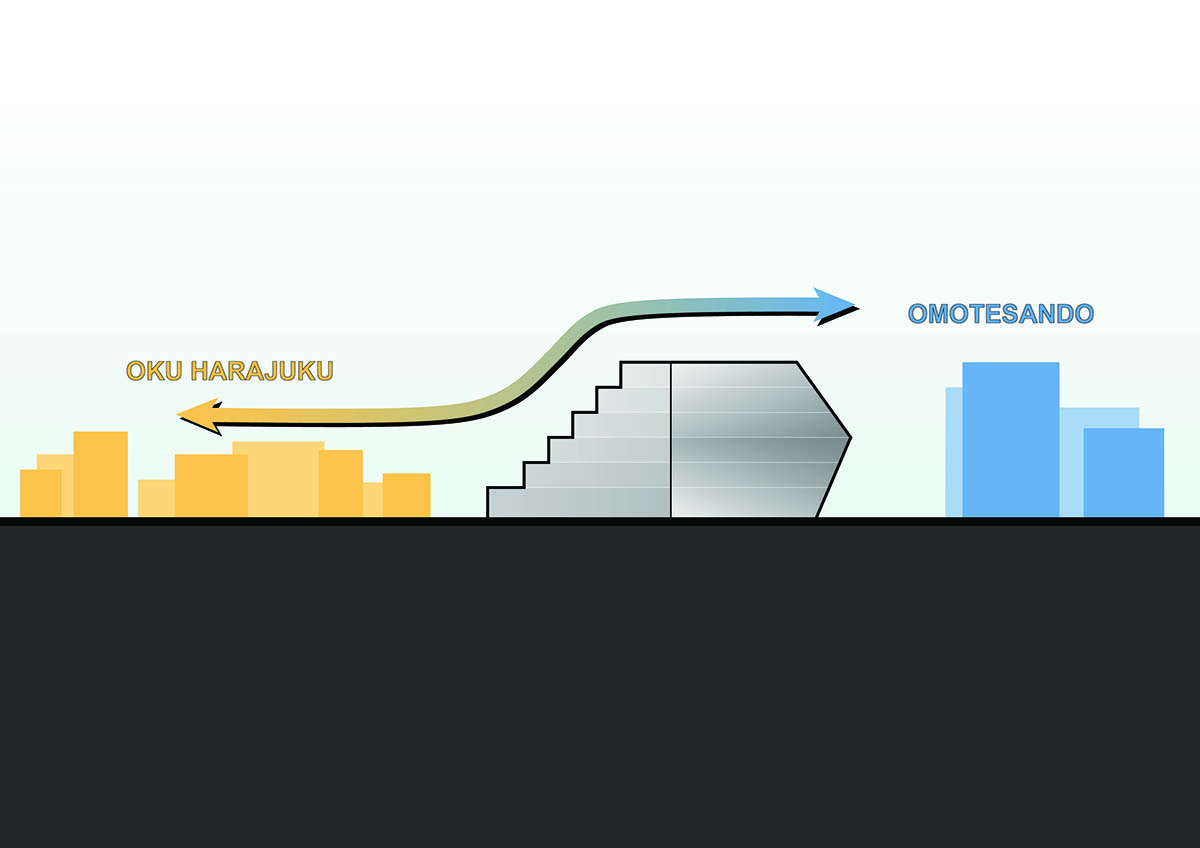 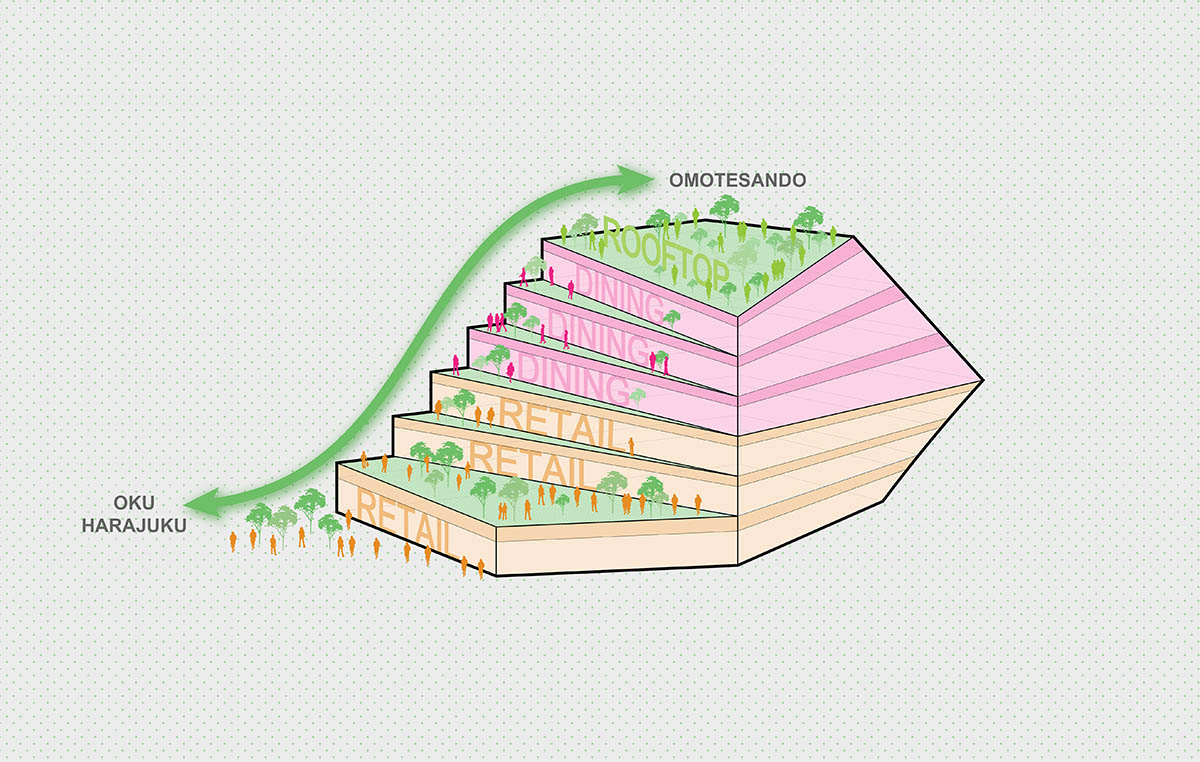 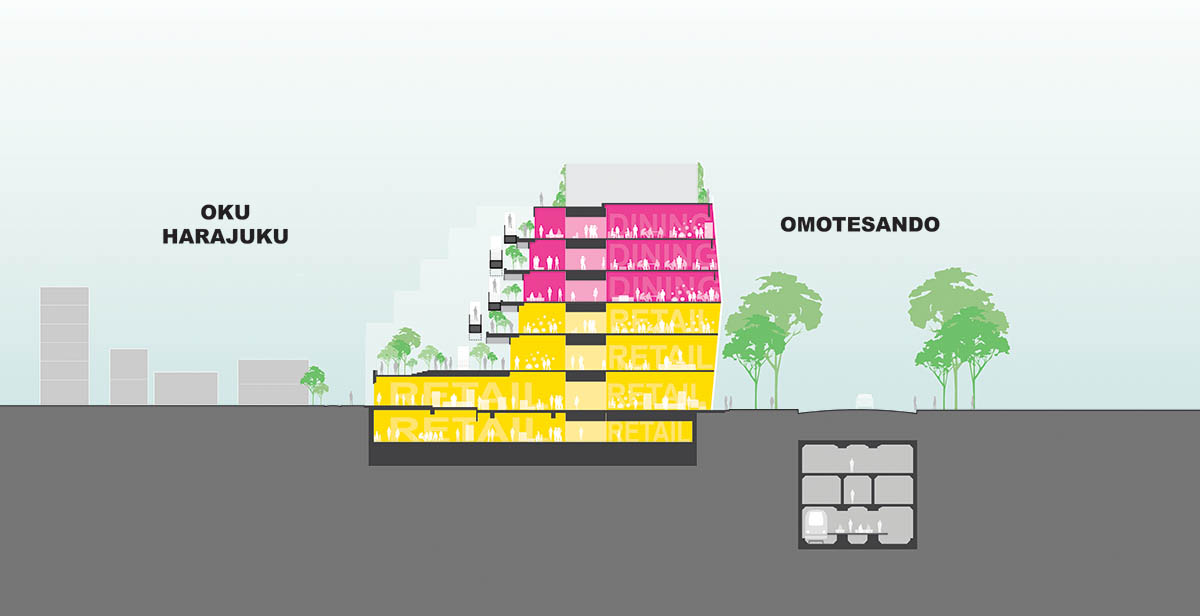 All images courtesy of OMA and Inplace.