Named Ascension Paysagère, the 8,200-square-metre complex, designed by MVRDV and co-architects ALL, contributes to Rennes’ outward growth with much-needed density in an undulating form that comprises three peaks.

Developed for Paris-based real estate developer Groupe Giboire, Ascension Paysagère, reaching at maximum 12-storey height in the centre, consists of 138 homes in a variety of sizes and price ranges, including 37 units of social housing.

Besides its residential programme, the complex incorporates commercial spaces and pleasant new public spaces in a green waterside environment.

Occupying a crucial transitional space between the Rennes’ centre and its outer reaches, the residential complex is situated at the confluence of two rivers in the west of Rennes, France.

"In 2018, French magazine l’Express called Rennes the most liveable city in France and, combined with the arrival of a new TGV connection in 2017, this attractiveness has led to a continued population growth," said MVRDV.

"The many heritage buildings in the city’s centre have shifted this expansion pressure outwards, requiring the periphery to grow either outwards into the countryside or – preferably – upwards with a pleasant approach to densification."

"Positioned precisely where the Ille River joins the Vilaine, across from the green floating park of the Jardin de la Confluence, at the end of the now-pedestrianised thoroughfare of Mail François Mitterrand, Ascension Paysagère’s highly visible location required an exemplary approach to this perimeter densification," the office added.

MVRDV takes cues from "geological formations" for this project. Two curving buildings; one large and one small, with gradually receding slopes, makes up the whole complex.

By the river, and at points where the project approaches its neighbours, the buildings are designed low-rise, acknowledging the expansive layout in order to adapt its contextual parameters.

Elsewhere in the project site, the design gradually steps up into three peaks, reaching the maximum 12-storey height in the centre of the site.

The terraces created by these gradual step-backs are dominated with plant-filled plots, to move the lush atmosphere of the riverbank upwards to the apartments even at the very top of the building.

The larger block is placed on the western corner of the site, and a garden with fruit trees are situated in between the building’s two ‘peaks’, emphasizing this green approach.

The studio reinterprets the impact of geological formations with material preference so that the façade could reinforce the connection to geology.

The façade is clad in matte and glossy ceramic panels in five different tones of grey, which are arranged into stratified layers: dark and mostly matte near to ground level, and lighter and glossier at the top levels.

"At night, lighting reinforces this effect, with more lights integrated into the ceramic panels at the top of the building," said MVRDV.

"As a result, the design seems as if it truly belongs – an outgrowth of the environment itself, which feels natural even as it significantly densifies this part of the city," the firm added.

"In Ascension Paysagère, we have delivered a project just as we hoped it would be, and exactly what is needed in this location," said MVRDV founding partner Nathalie de Vries.

"With the river and the park opposite, the site offers a wonderful location for people to live. The challenge was to allow as many people as possible to live here without destroying those qualities."

"We do this by creating an ensemble of two buildings with silhouettes like small hills, covered with terraces and balconies to allow the inhabitants nice outdoor spaces that are already provided with large pots for plants and trees," Nathalie de Vries added.

Every apartment has an outdoor space – either designed as a terrace, a balcony, or a loggia. Each of these has custom plant pots equipped with automatic irrigation as well as a dedicated water tap to help residents care for their piece of the landscape.

According to MVRDV, "the terraces create a village-like atmosphere that allows residents to greet their neighbours above and below."

A series of public spaces, defining the curves of the buildings, are arranged at ground level, with a green pedestrian street between the two blocks and a plaza at the water’s edge that leads to Le Bacchus.

On the other hand, a restaurant and theatre are placed on the curve of the larger building.

The entrances to the larger building are found in three inviting, wood-clad passages that punch through the building, creating generous meeting spaces and providing views and access to a secluded garden at the rear of the theatre-restaurant.

At the entrance to the site, a renovated former tax office is included in the urban plan, making the public square a mix of three architectural periods.

The team employs a variety of approaches to ensure sustainability and social responsibility.

For instance, densifying an urban area reduces the city’s need to expand into the surrounding landscape, and the parking garages include a total of 210 square metres for bicycle parking, including dedicated spaces for cargo bicycles and electric charging stations to encourage more sustainable transport options.

A total of 34 apartments of the smaller building are designed with passivhaus standards, enabling them to use dramatically less energy than typical apartments, according to MVRDV.

Many of the apartments are double or even triple aspect, with windows on multiple sides of the building to allow cross ventilation and excellent natural light conditions inside.

A diverse range of apartment types is spread throughout the building, including 37 homes for social rent and 42 for sale as affordable housing, ensuring that the project offers something for people of all income levels and family sizes.

The communal spaces in the buildings feature high-standard finishes and are open to all residents, treating every occupant equally regardless of the price or type of their apartment.

With the green surroundings, the location on the water, and the beautiful outdoor spaces, Ascension Paysagère is poised to further add to the liveability of Rennes, and can serve as a demonstration of how the city can meet its current housing demand. 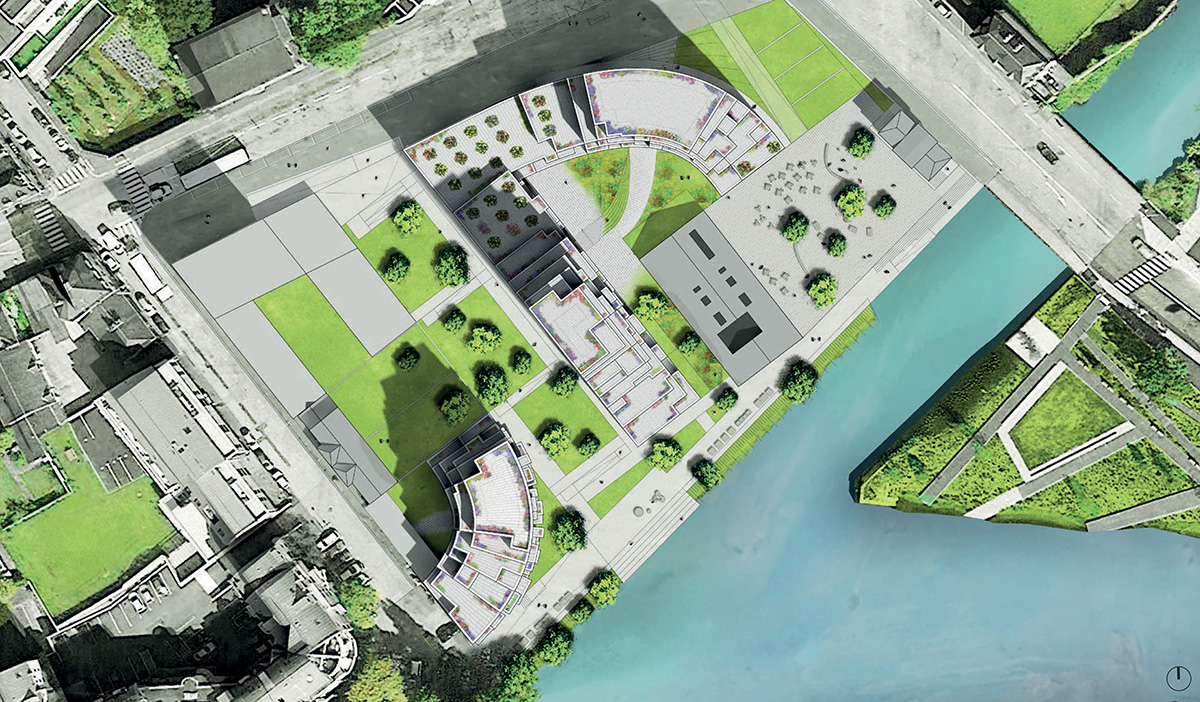 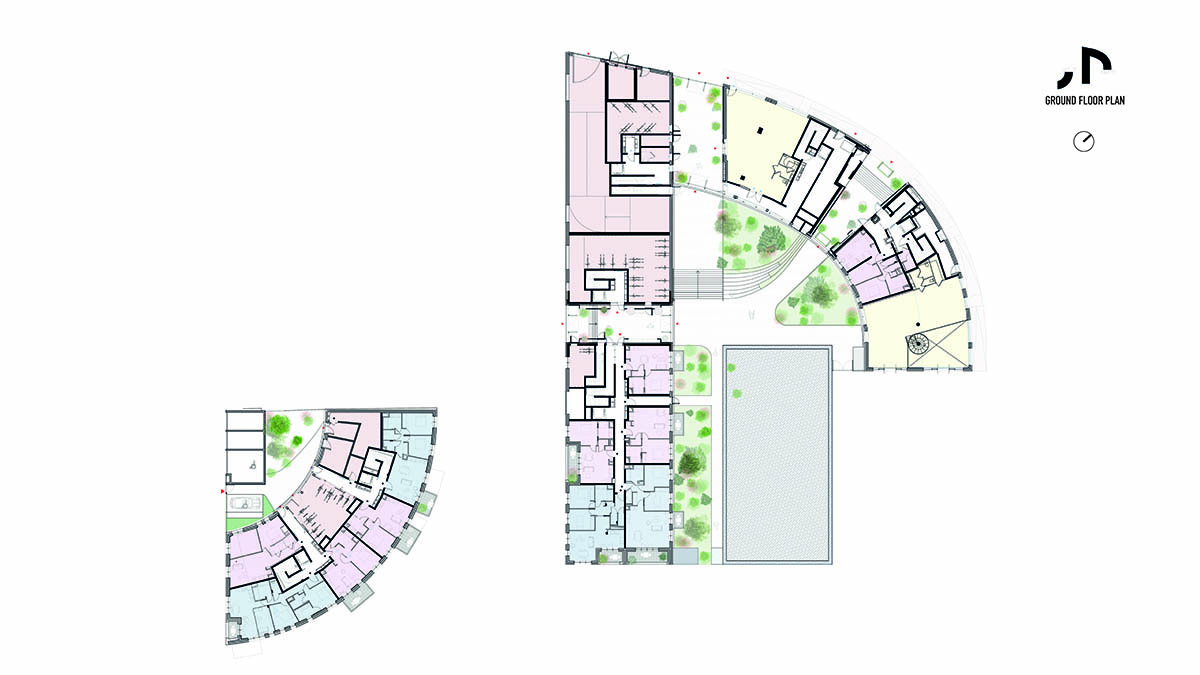 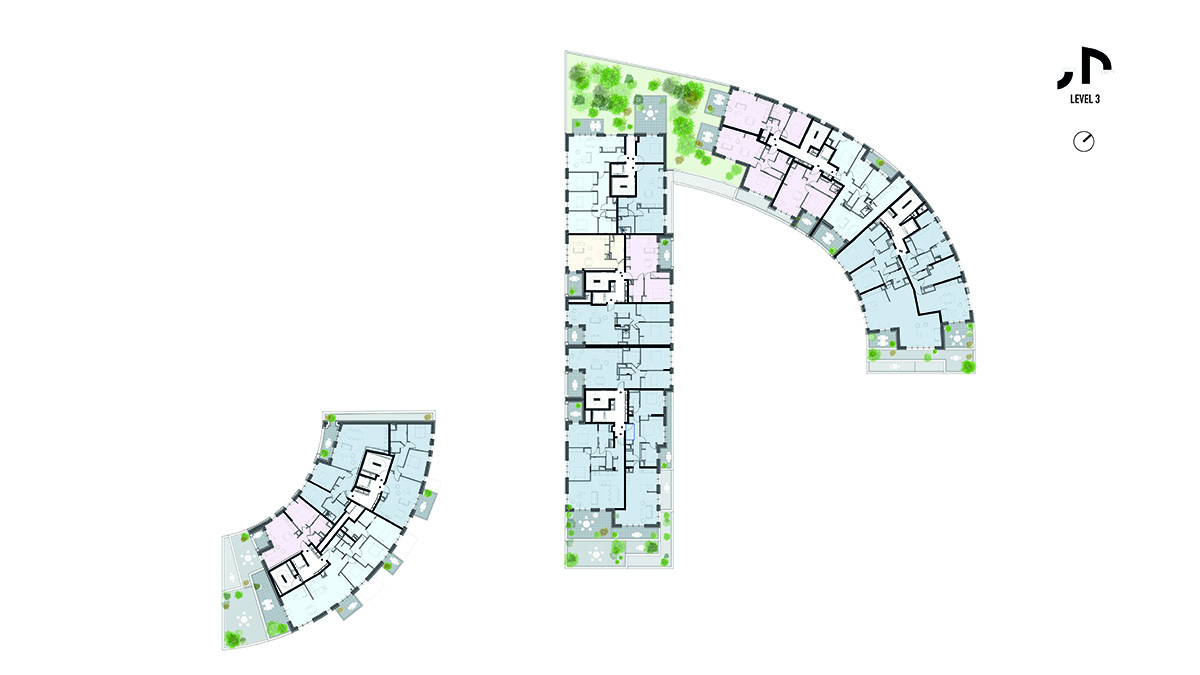 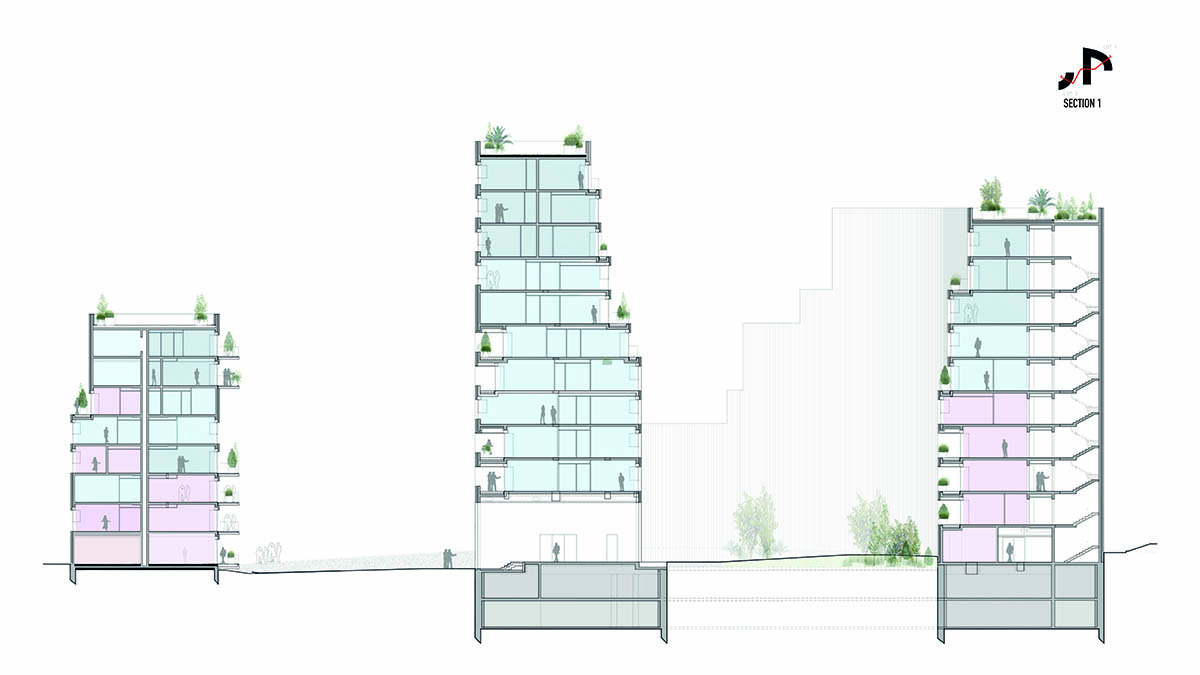 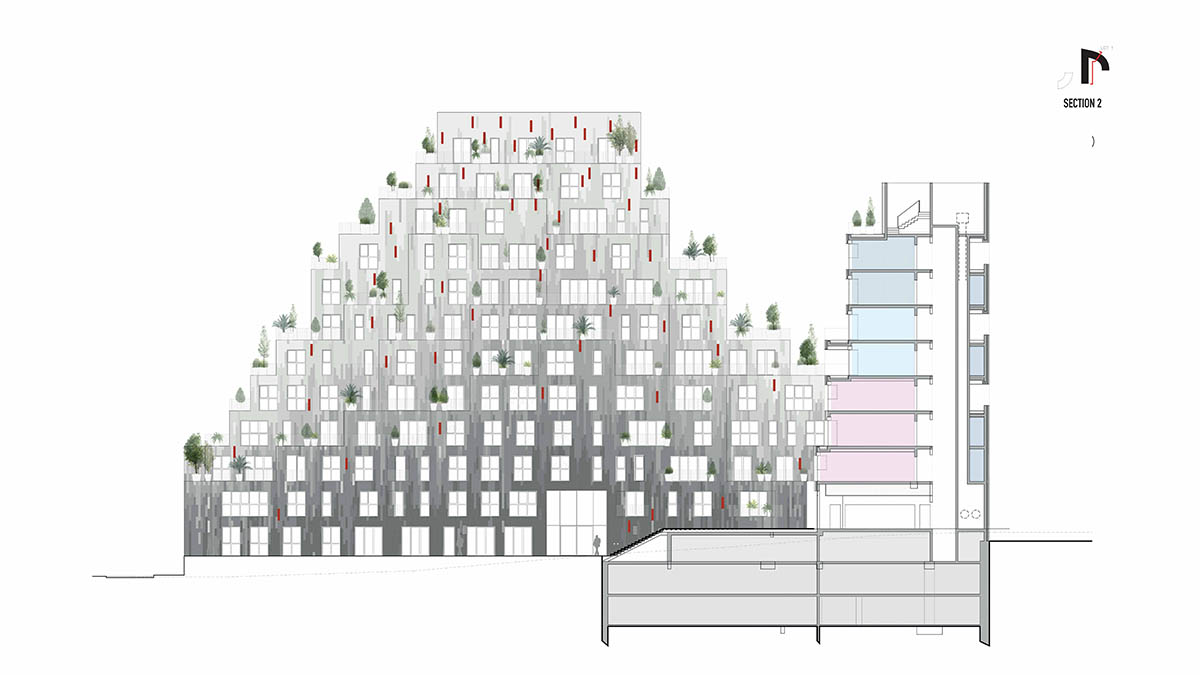 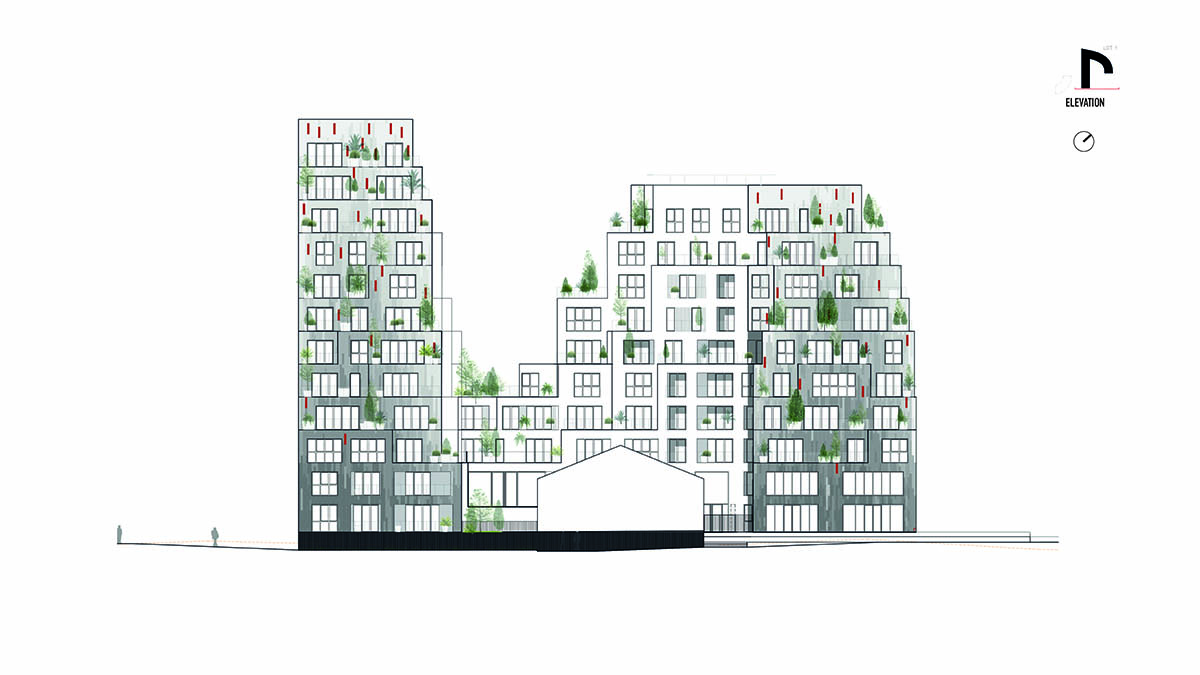 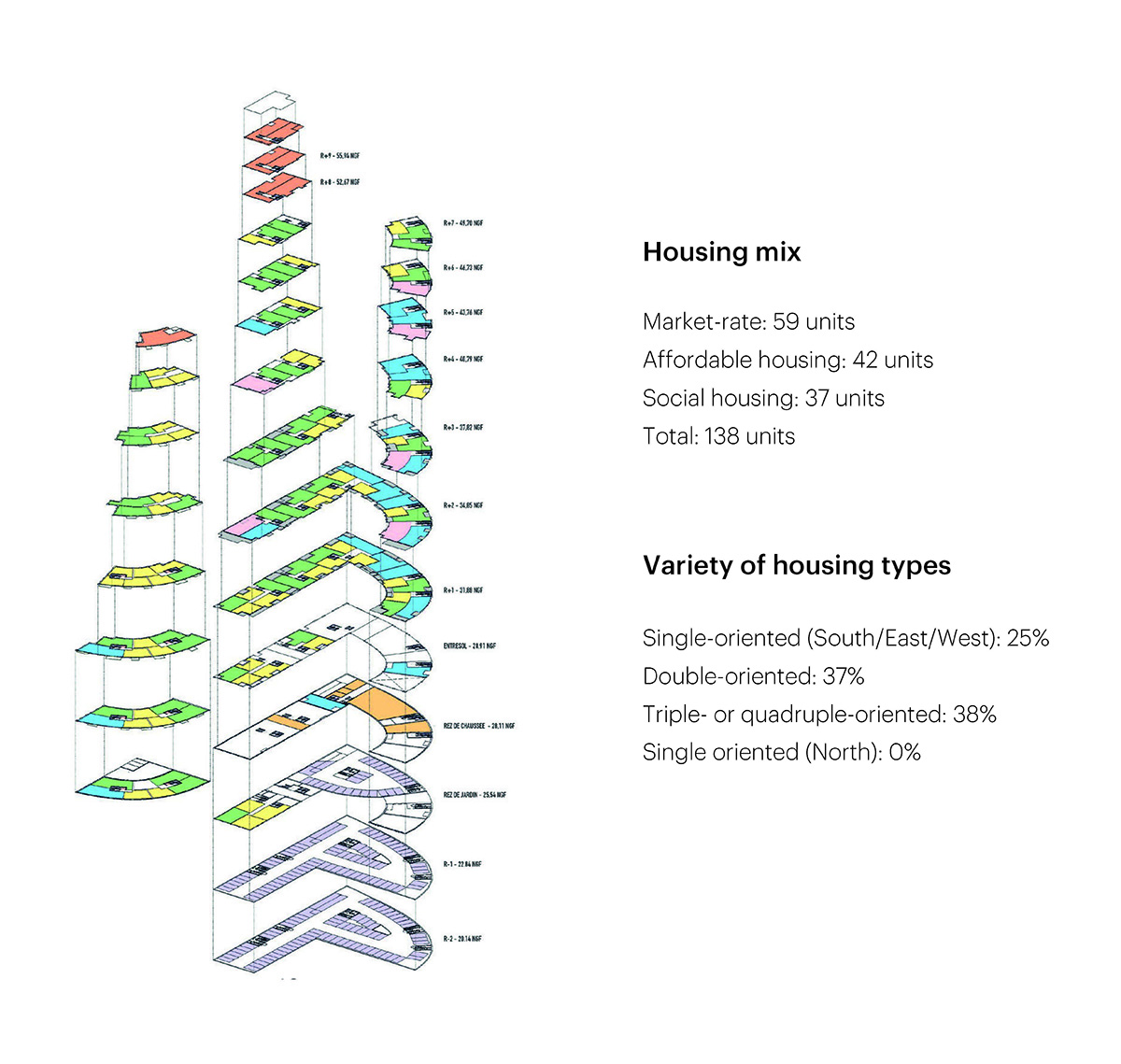 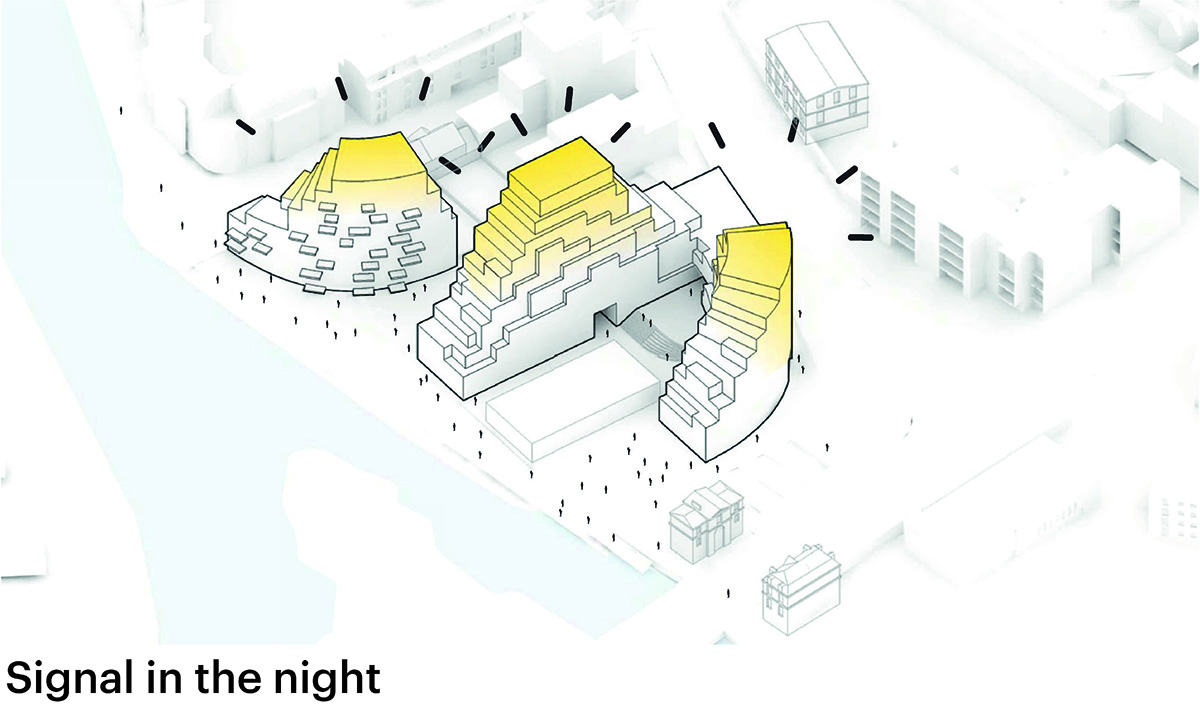 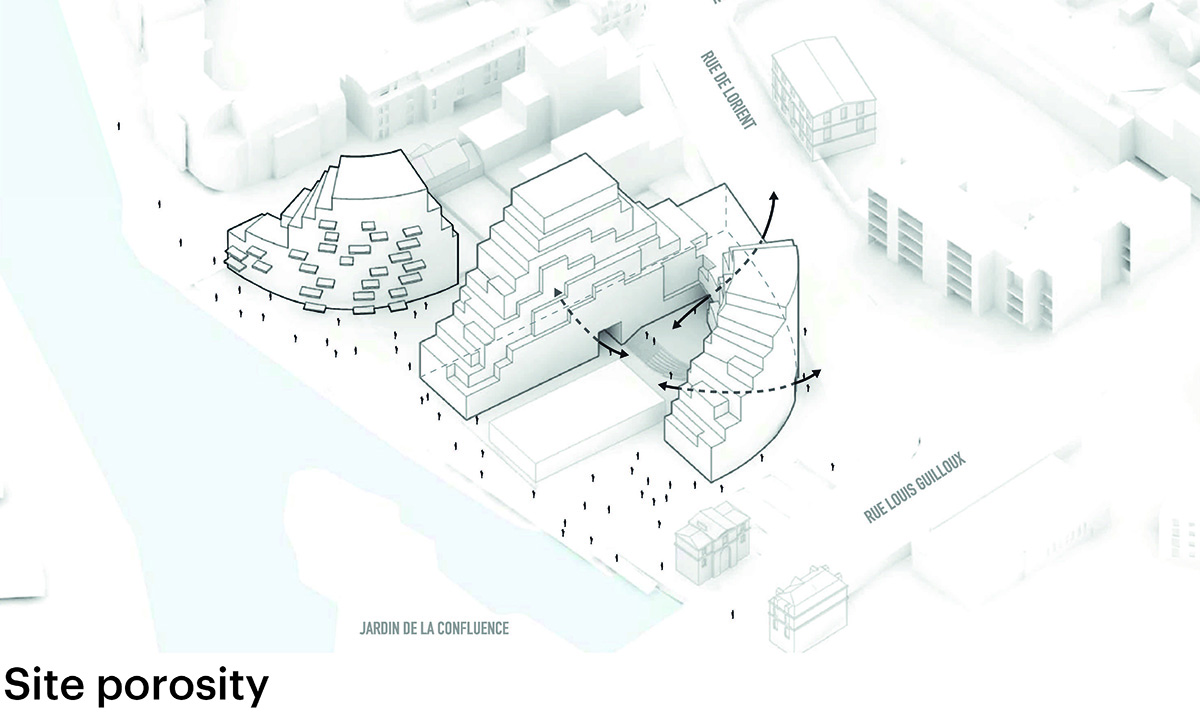 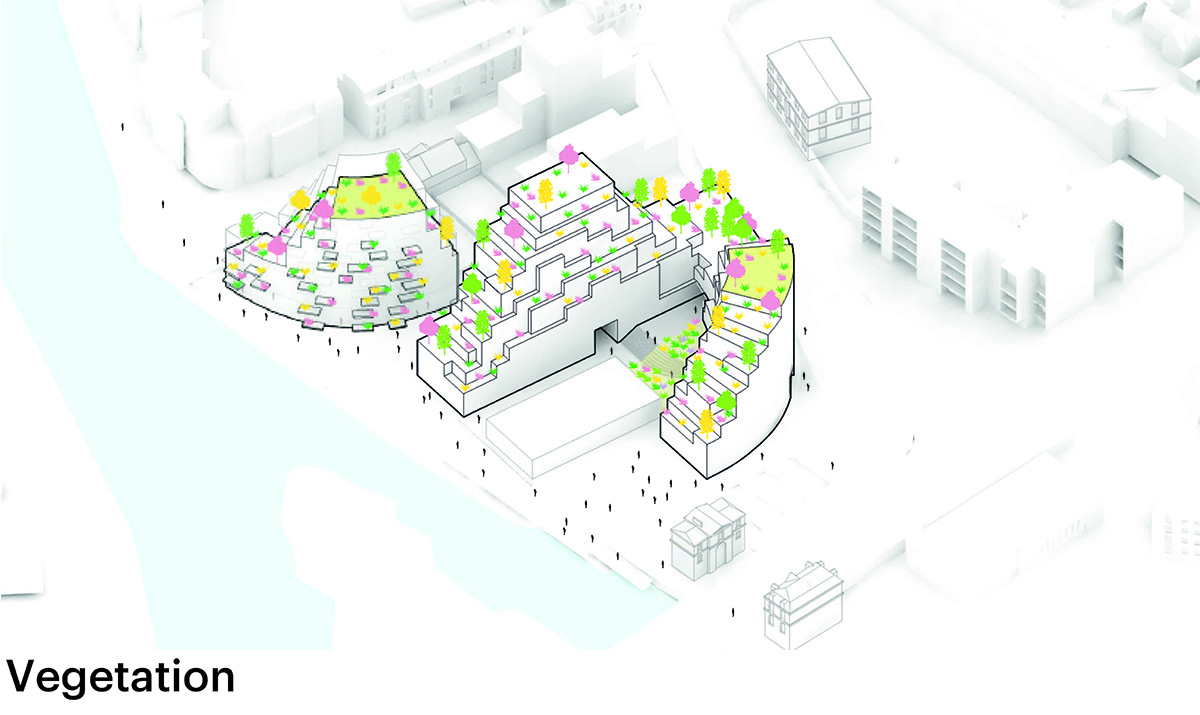 MVRDV completed its first US project in upper Manhattan, comprised of a stack of colorful volumes on top of each other. The firm also complete its another "geology-inspired" skyscraper, named Valley, in Amsterdam.