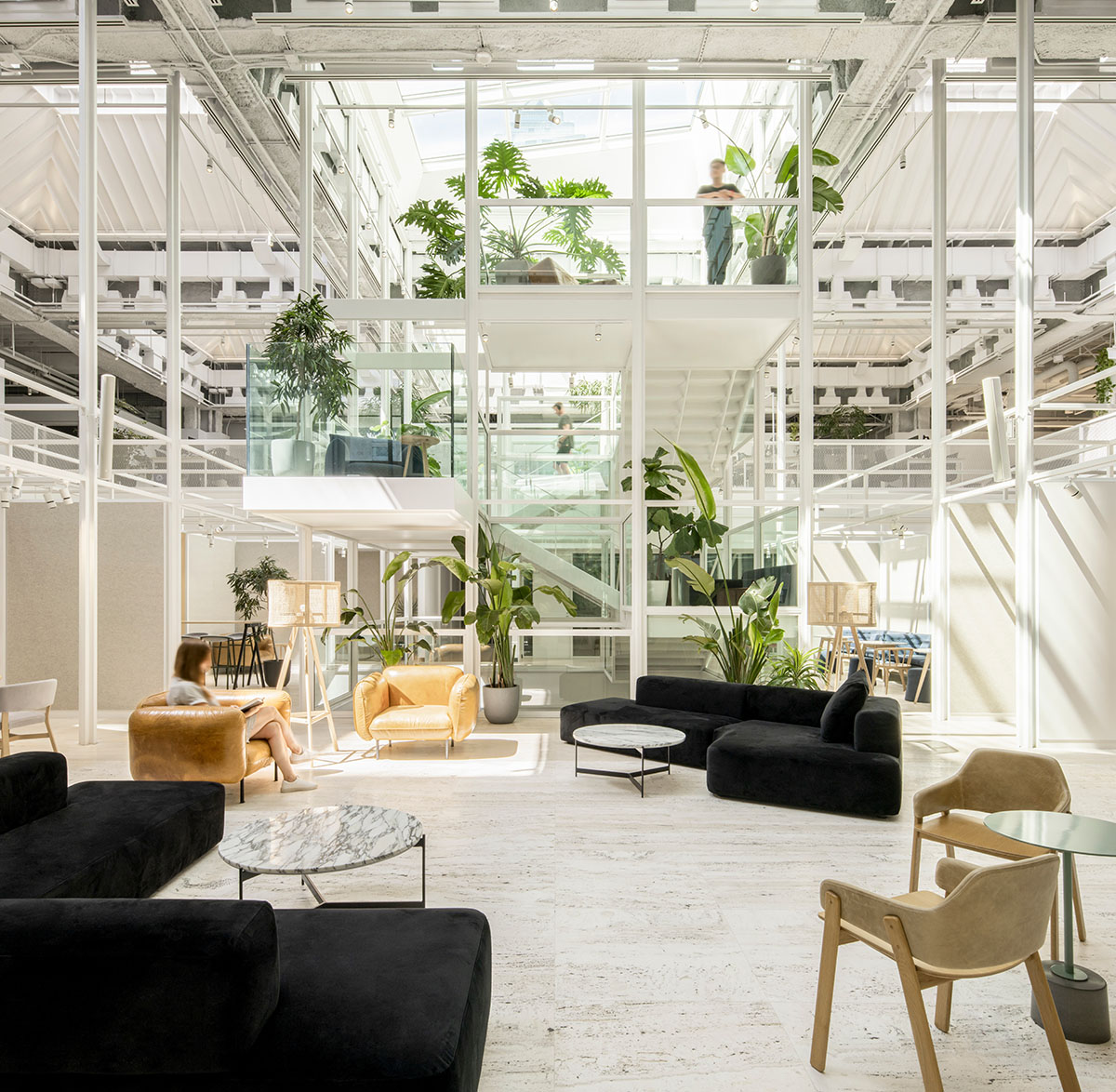 Designed as the new headquarters of creative agency Sid Lee, the practice describes the project as "Sid Lee Biosquare", a campus that makes creativity float over the heart of downtown Montreal.

The 187-meter-tall Place Ville Marie was designed by IM Pei and Henry N Cobb in 1962 in downtown Montreal. The office project was realized as part of a larger project to revitalize the iconic Place Ville Marie and its esplanade. Sid Lee Architecture designed the new offices for leading creative firm Sid Lee, which is now headquartered in three of the quadrants formerly occupied by the Royal Bank of Canada.

The offices are located at the base of the tower, in which an urban grid is extended through the interior of the base. While the ground floor is called as "Square", the upper floors are called as "Biosphere". Derived from the combination of the two words: Biosphere and Square: Biosquare, the name is given because of its shape and biophilic elements in which they impose and Biosquare acts as an extension of the urban environment in which it is located.

According to the studio, this also references to the intersection of disciplines and social spheres. 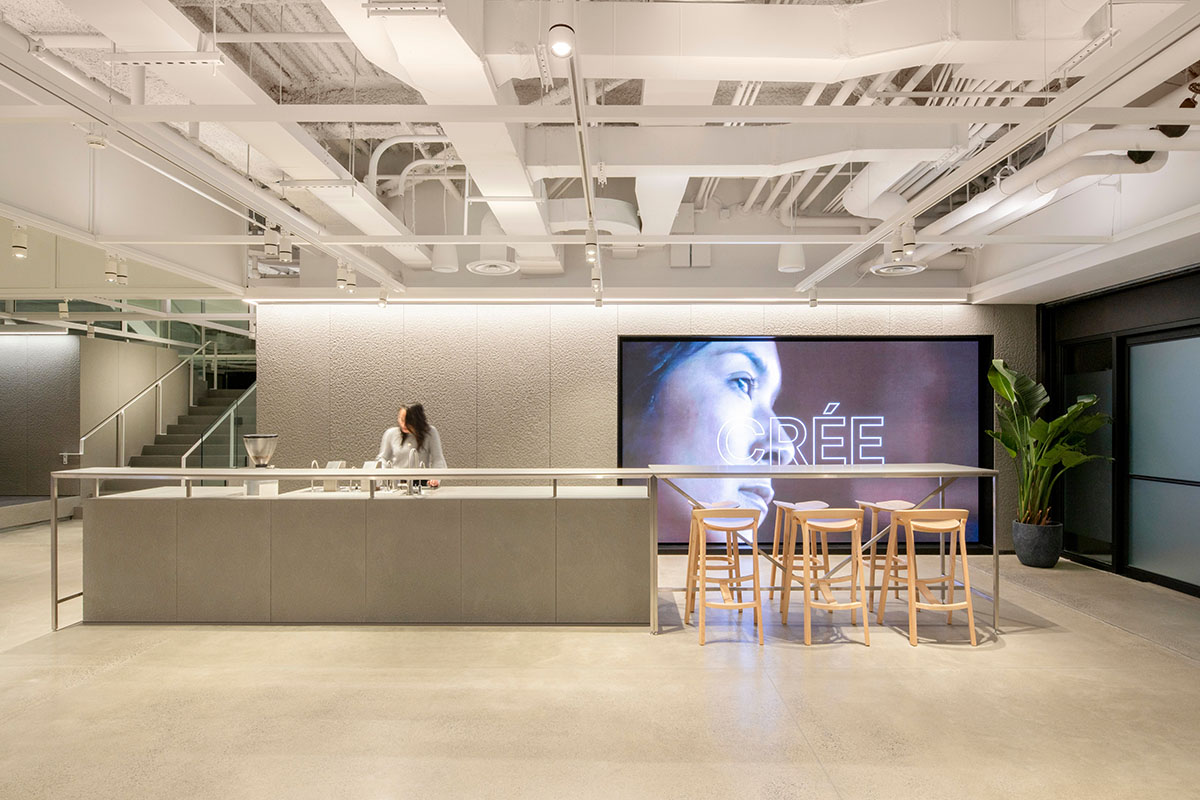 The project also features a luminous and open renewal of one of the city’s most iconic spaces. With workers returning to offices, the Biosquare stands out as a place for inventiveness, floating in the heart of downtown, a liminal space bridging the street and the interior through the free flow of ideas.

"We envisioned the space as an extension of the city and its energy," said Jean Pelland, architect and principal partner at Sid Lee Architecture.

"By anchoring the architectural elements in human interaction, the campus becomes a platform that is active at all times of day, a place where artisans can gather, collaborate and create," Pelland added. 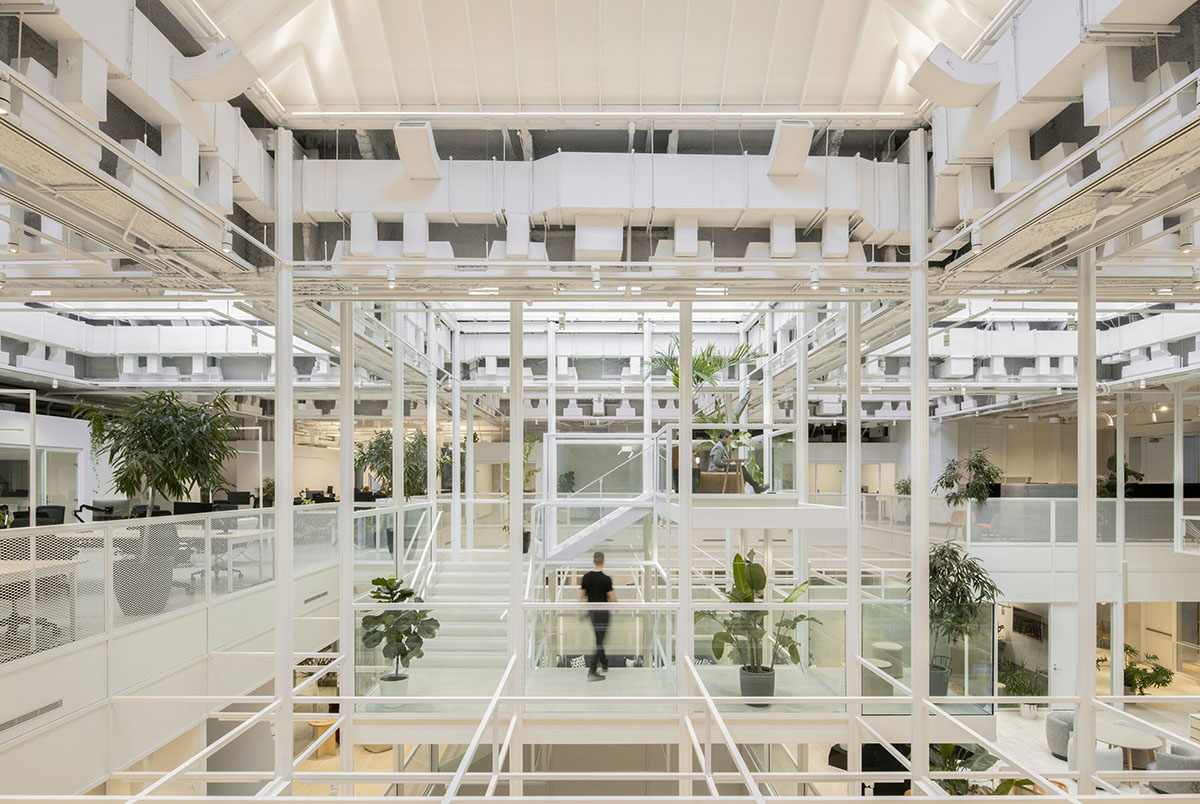 A microcosm open to the city

First principle was to provide the free flow of the urban platform, with the aim of achieving continuity between the city outside and the offices within. 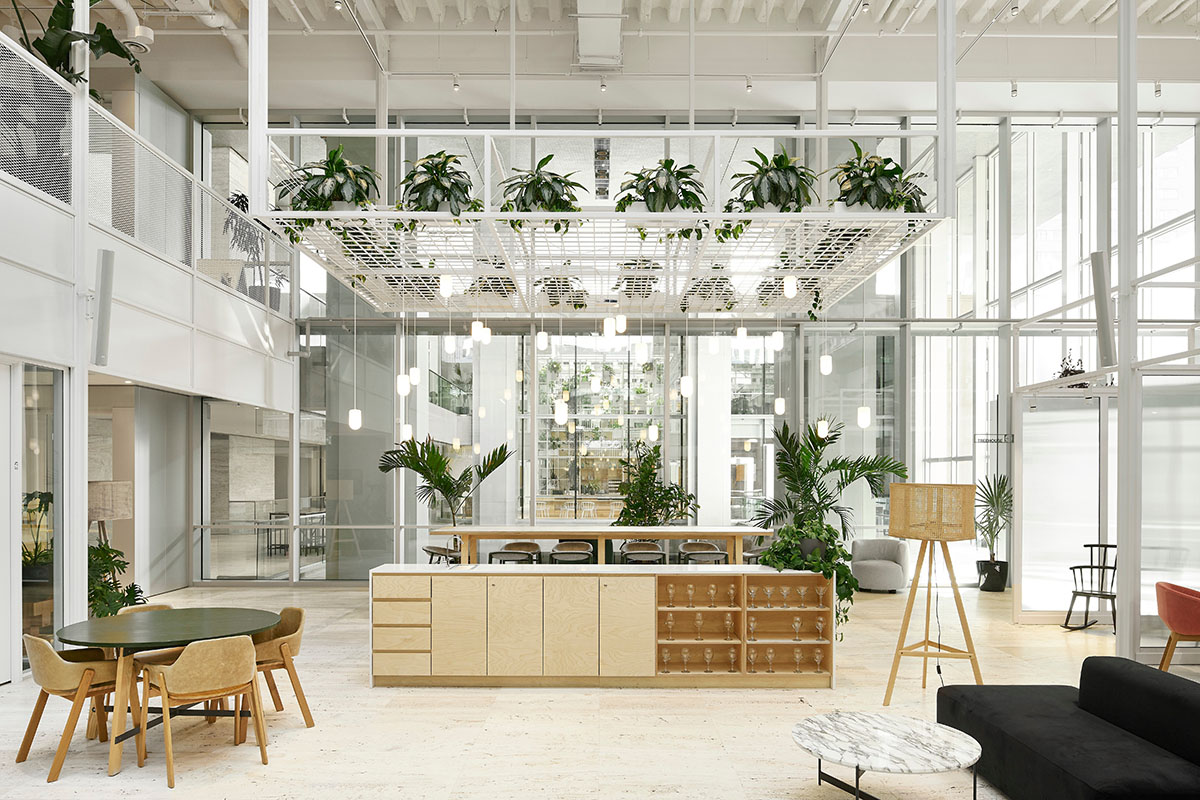 "That continuity principle is also found in the infinite grid structuring the organization of the space. Covering the entire office area, the grid made it possible to conceptualize an open zone where different functions coexist easily and freely," said the office.

In contrast to siloed, fragmented offices, Sid Lee Architecture used the gridded template as a platform to link all of the spaces and the people moving within them.

According to the firm, The Biosquare functions as "a shared microcosm with endless possibilities" - a collective world where professions mingle and the boundaries between functions are blurred. 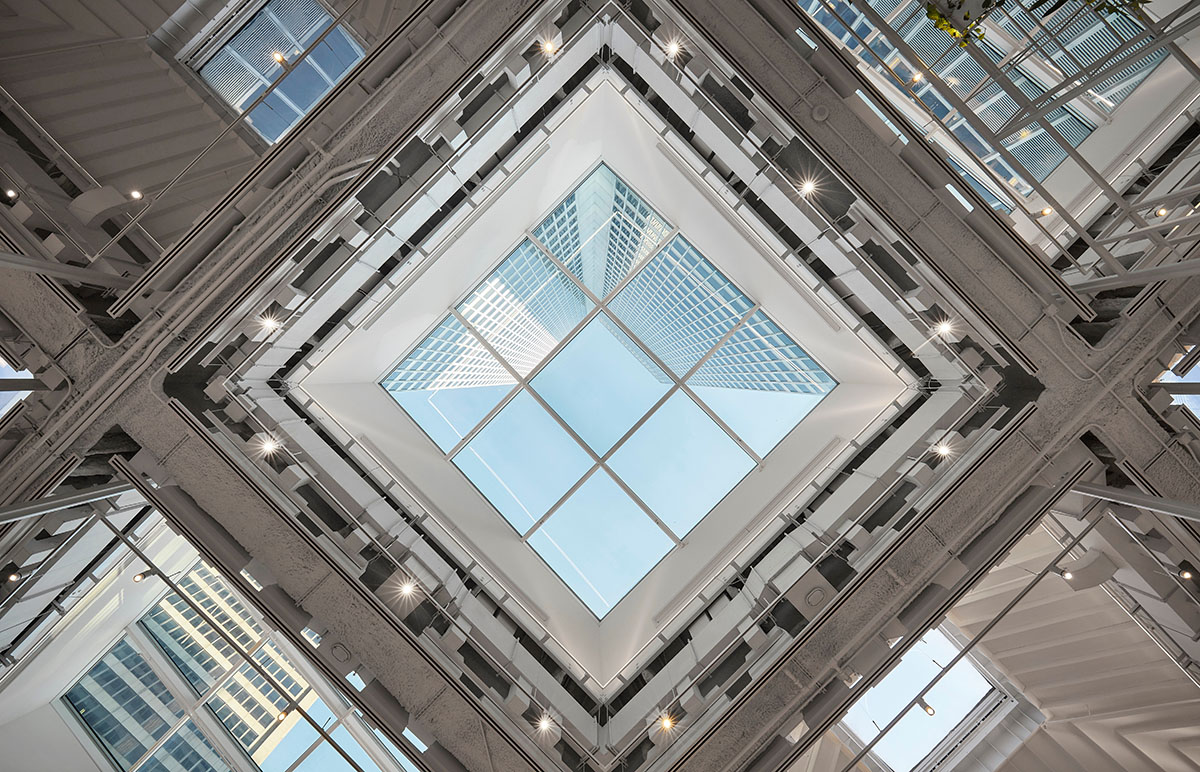 On the ground floor, the main entrance to the Sid Lee offices provides an uninterrupted view of the public plaza. The dominant material type on this floor is mineral, with monoliths made of bush-hammered stone rising to form the café, kitchen and washroom spaces.

This level’s different uses create the impression that each function is emerging from the ground independently. Here, we can infer a reference to the underground city, which provides a setting for the vitality of urban activity in nearby areas. 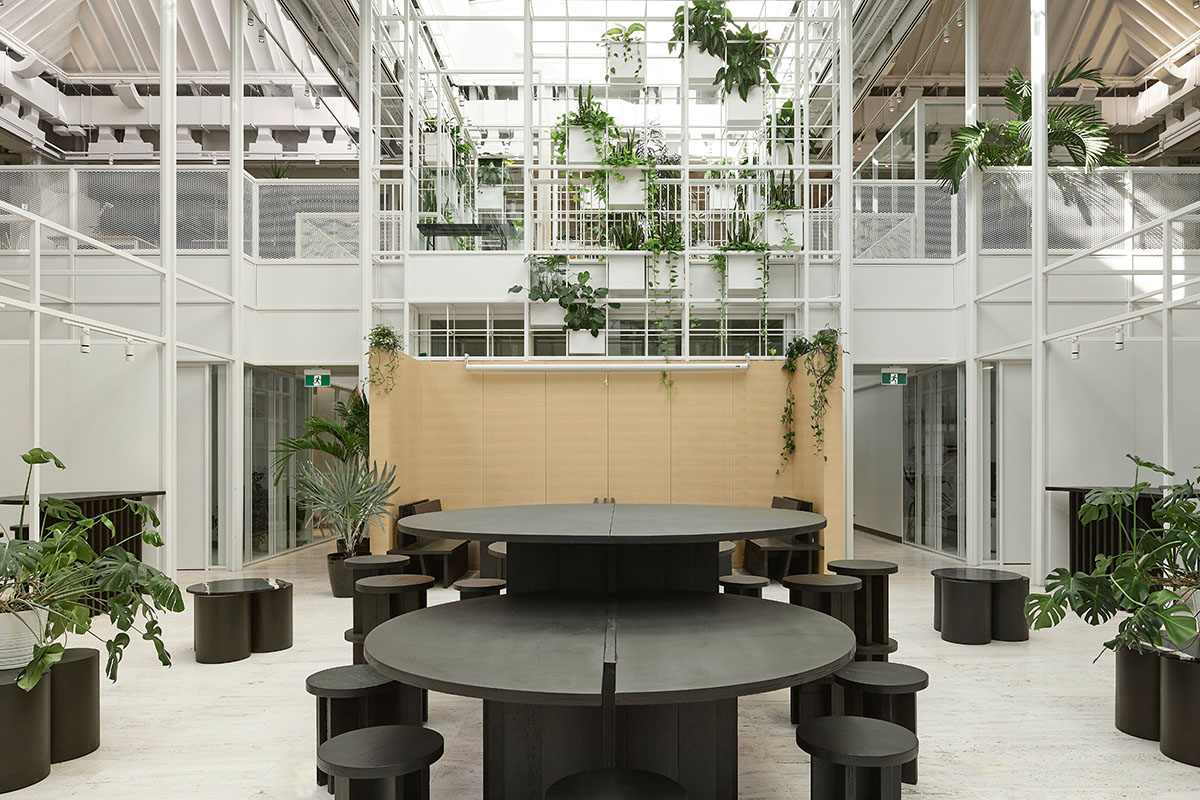 In the large clusters of stones, a delicate touch in the details preserves a sense of lightness. Shapes and materials brush against each other, as if floating.

Each element is freely added to the others, strengthening the impression of completeness and fluidity while letting nature make its own path. 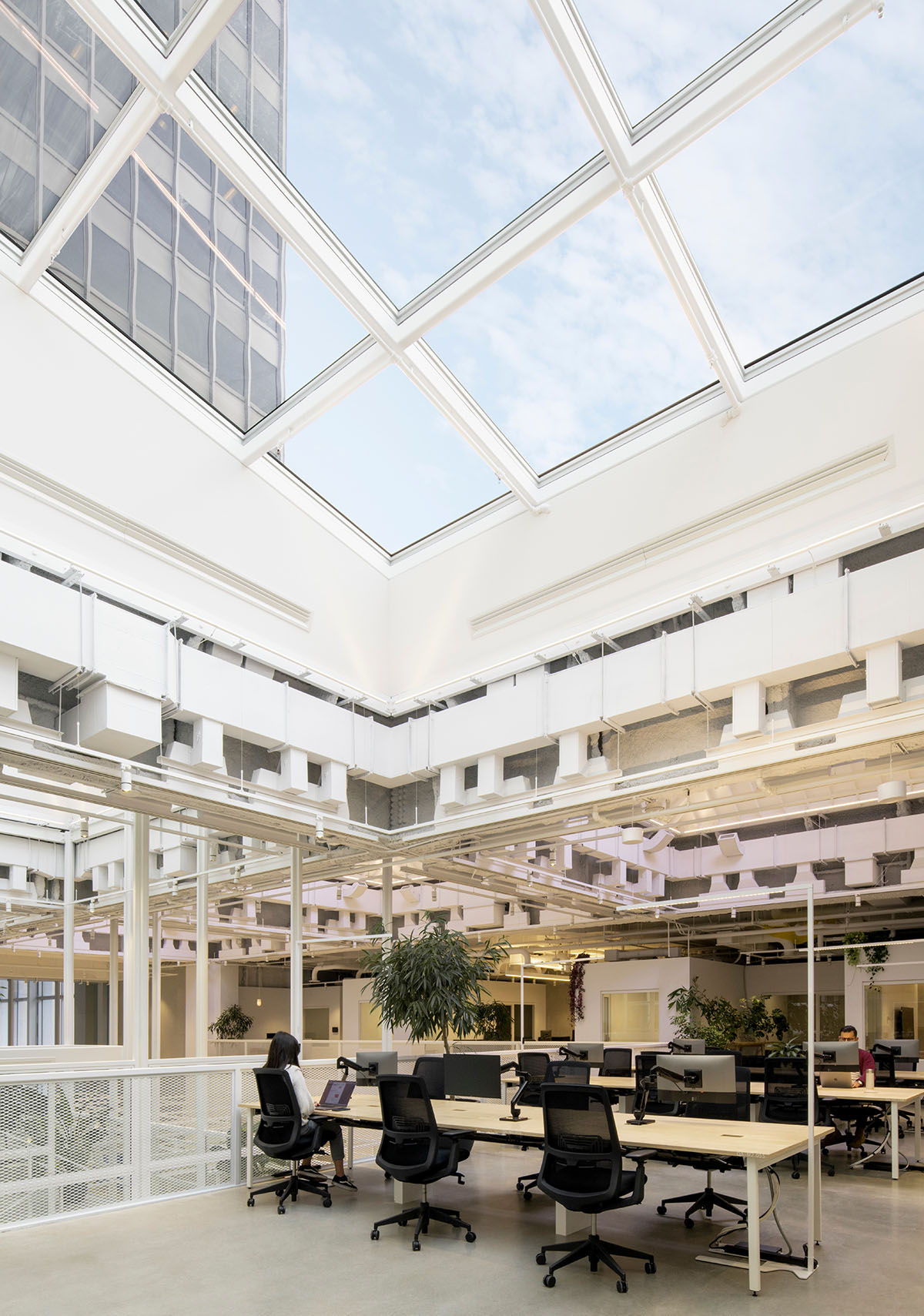 As employees ascend to the first mezzanine and gain access to the two large stone quadrants where Sid Lee’s main creative and working spaces are located, the natural elements already start to emerge from the ground now take centre stage.

"We have arrived in a dynamic place where magic happens. A third bridge has been added to the two existing ones to connect these two cubes in an agile and flowing manner," said the office. 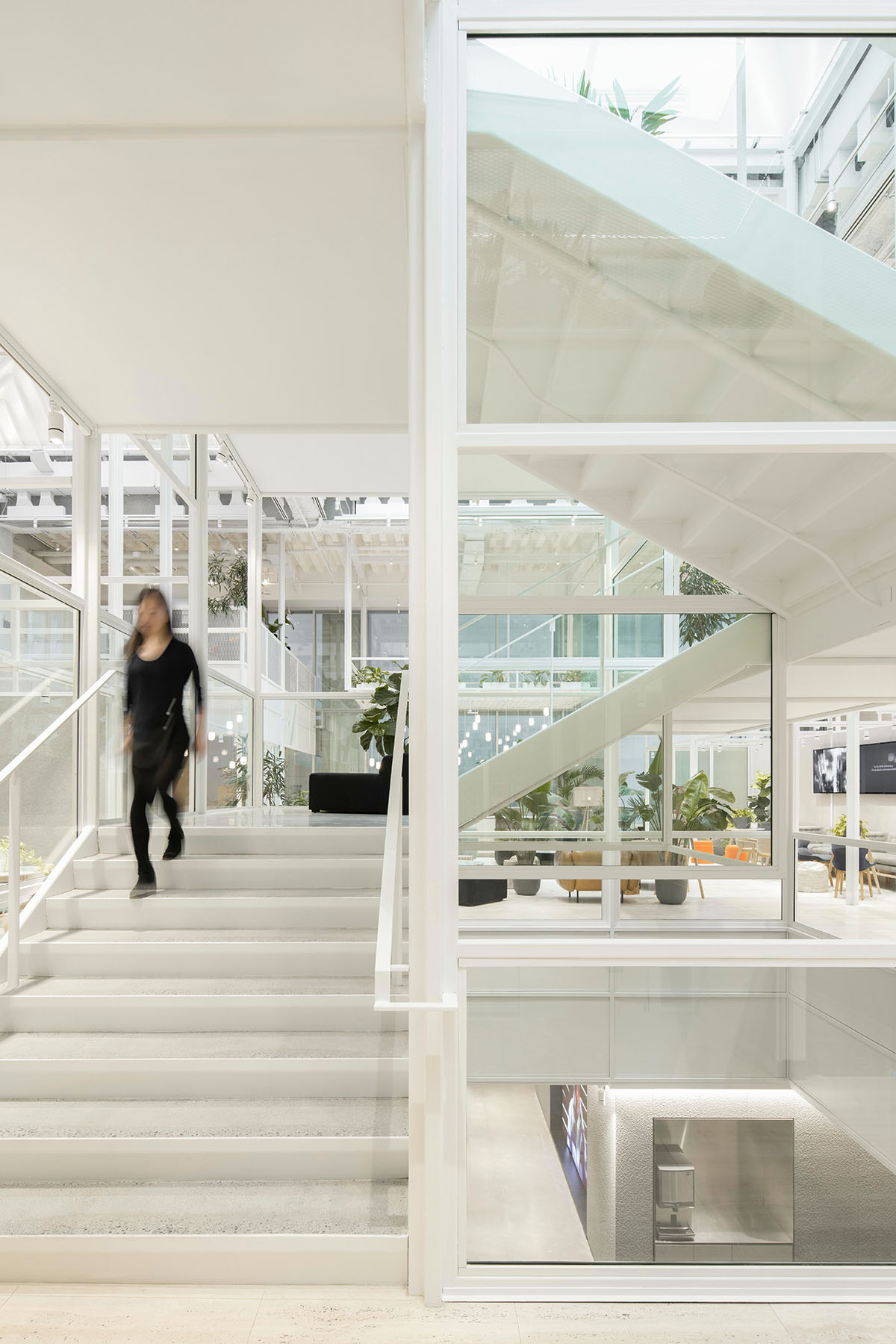 "On this floor, the grid as an organizational concept is apparent in each element, whether architectural or aesthetic. The centre of each quadrant serves as an agora, offering a more welcoming atmosphere that encourages people to gather."

"A balcony effect is created naturally when we turn our gaze upward and outward. Around the symbolic core of the common space, the rooms become smaller and more private," the office added.

Here, the grid structure serves as a framework for bringing together different worlds in a single ecosystem.

It is a large canvas that allows employees to deploy creative territories and gives the visual impression that anything can be built, that we can integrate blocks, walls, new functions and new ideas as they appear. "This architectural metaphor also reminds us that everything is connected while free-floating in the air," the studio added. 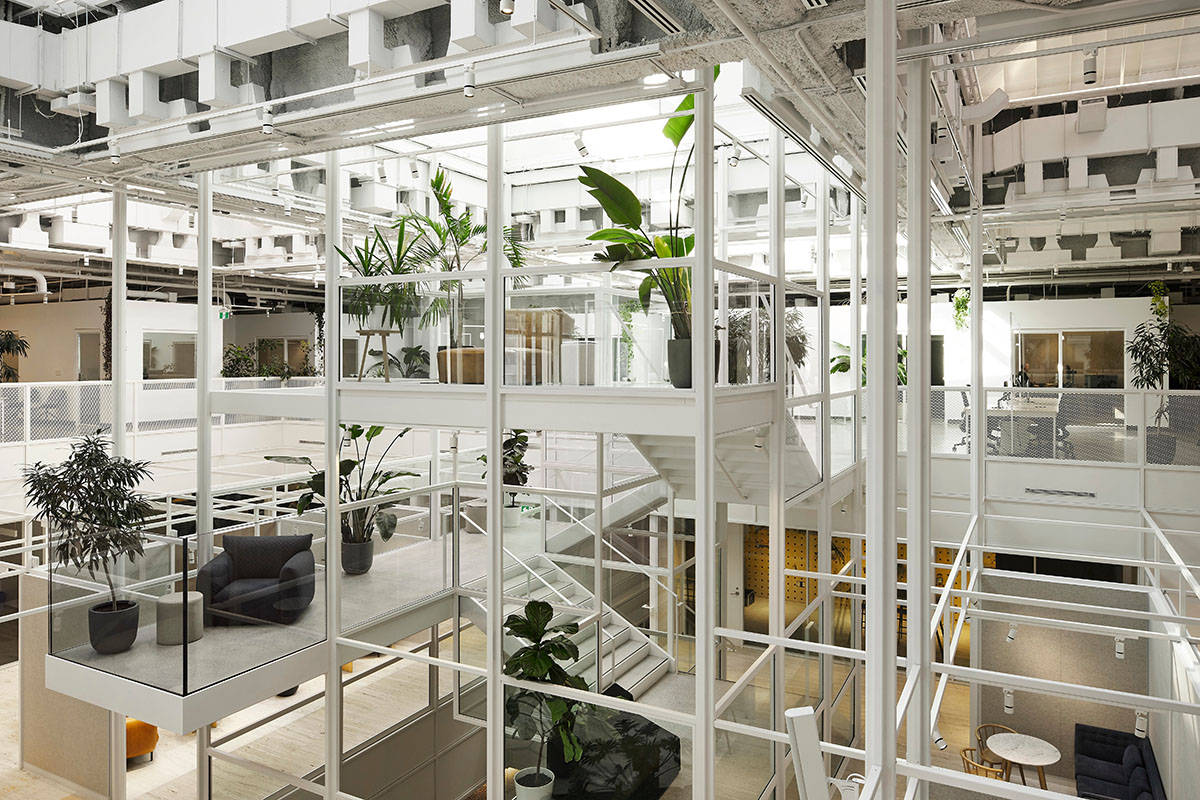 The original travertine floors were uncovered and enhanced in the renovation process, and the skylights were stripped to reveal their structure, several of which were also strategically enlarged.

Thanks to the linearity of the aerial grid, our gaze is led upward to the vast swaths of sky that were deliberately highlighted and made visible from most workstations. 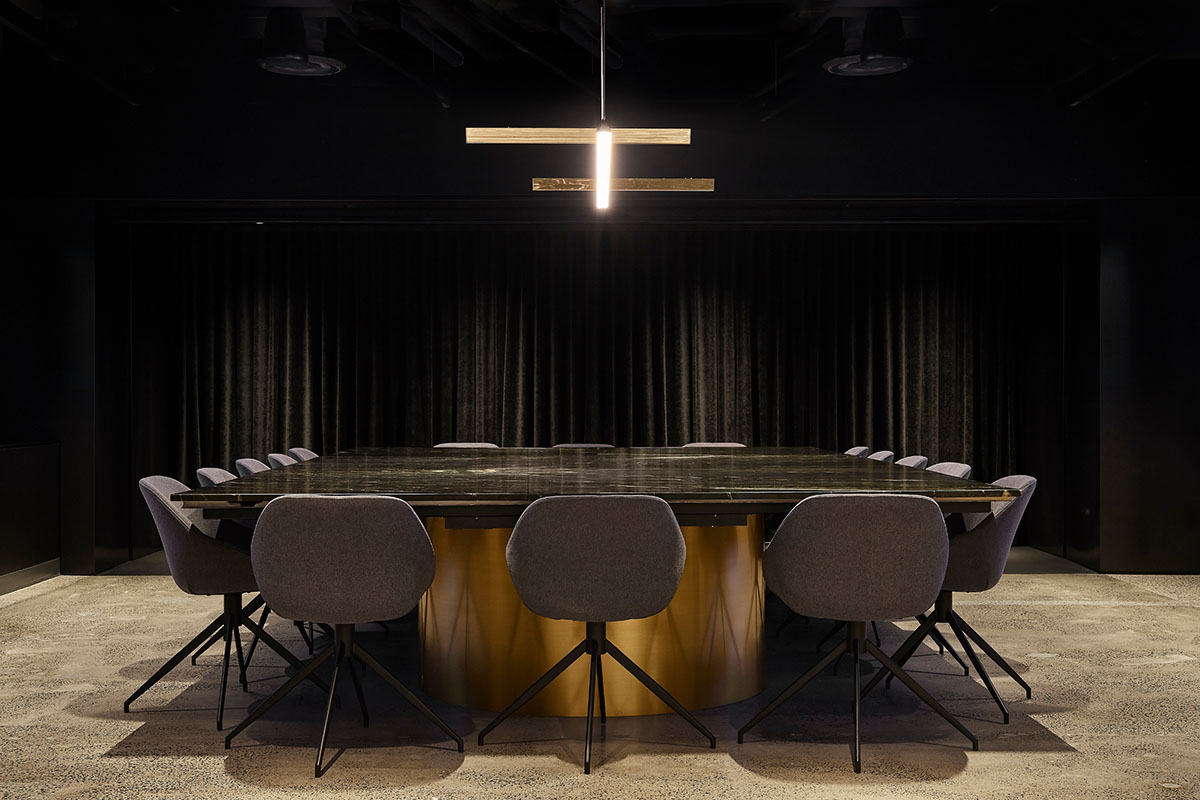 The space is punctuated with multiple light fixtures by local lighting and design studio Lambert & Fils while a series of rooms displaying strong and distinctive conceptual identities stand on the periphery of the main grid and agoras. 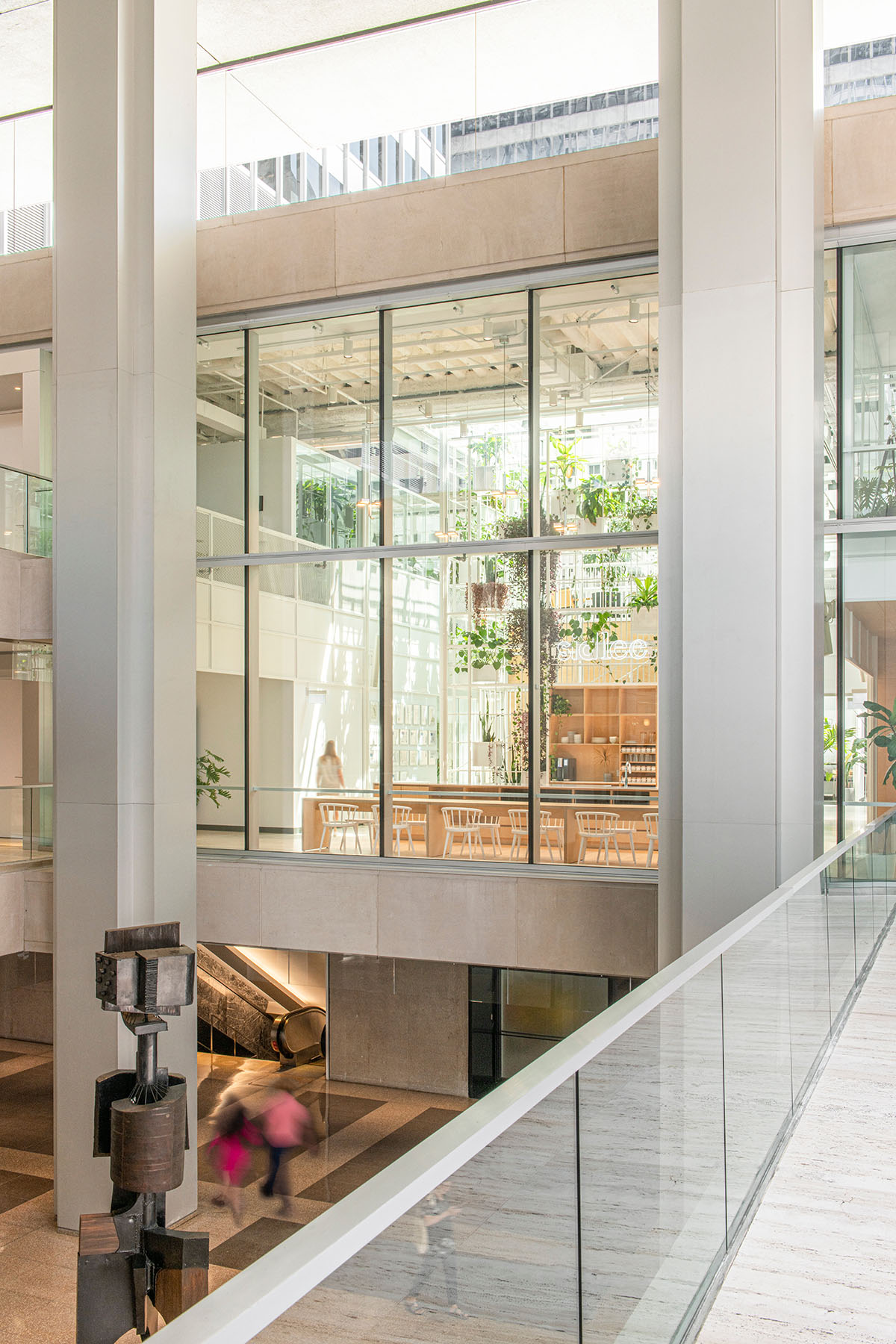 Created with the intent of providing inspiring environments for the firm’s teams, these spaces are ultimately immersion rooms for imaginative work. Inspired by natural references and familiar textures, they embody, in a sense, the multiplicity of imaginations that come together at Sid Lee. 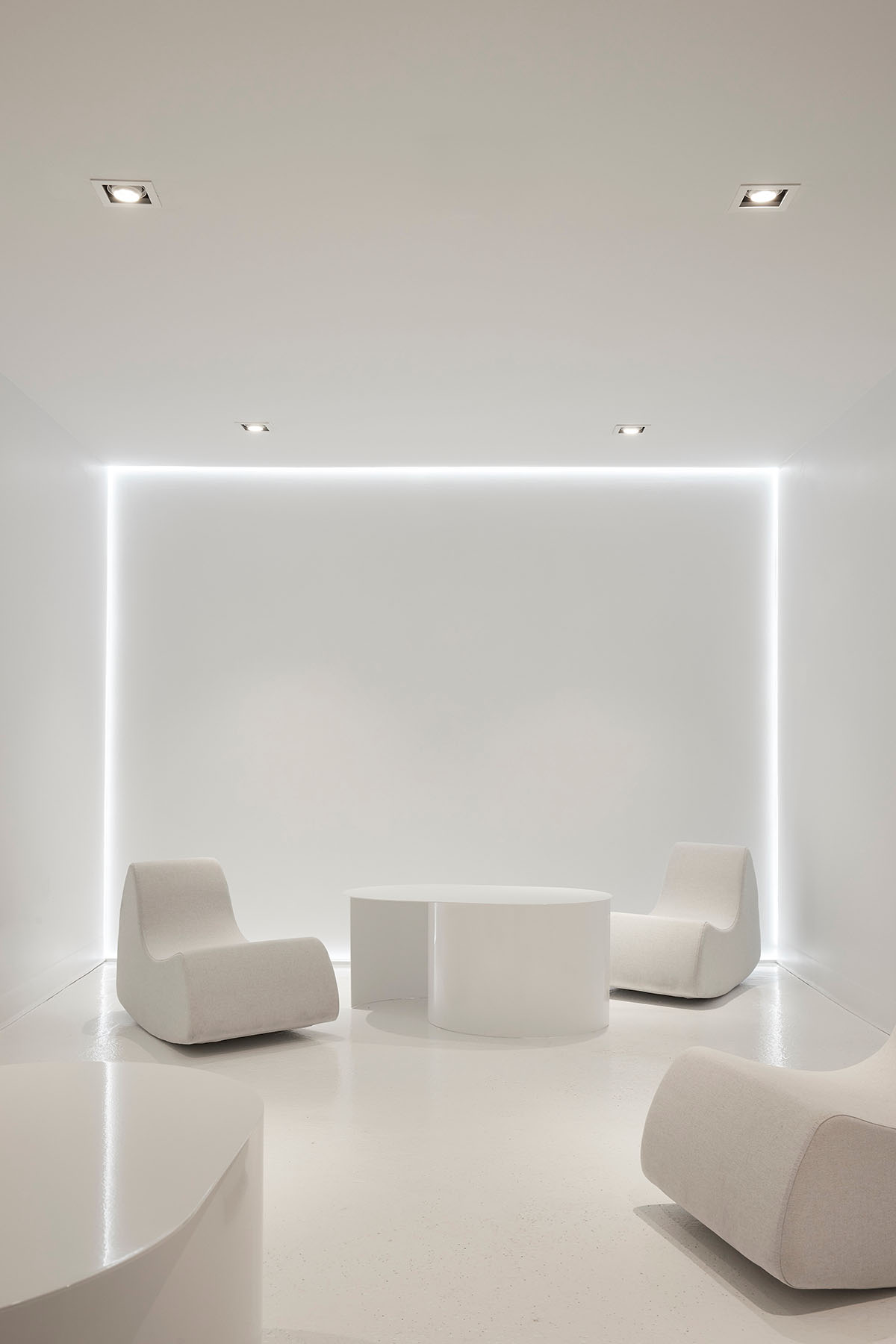 "With the Biosquare, Sid Lee is bringing its entrepreneurial spirit to downtown Montreal and creating an accessible collaborative hub for the city’s creative and business communities, with the aim of helping novel ideas emerge," said Sid Lee co-founder Philippe Meunier. 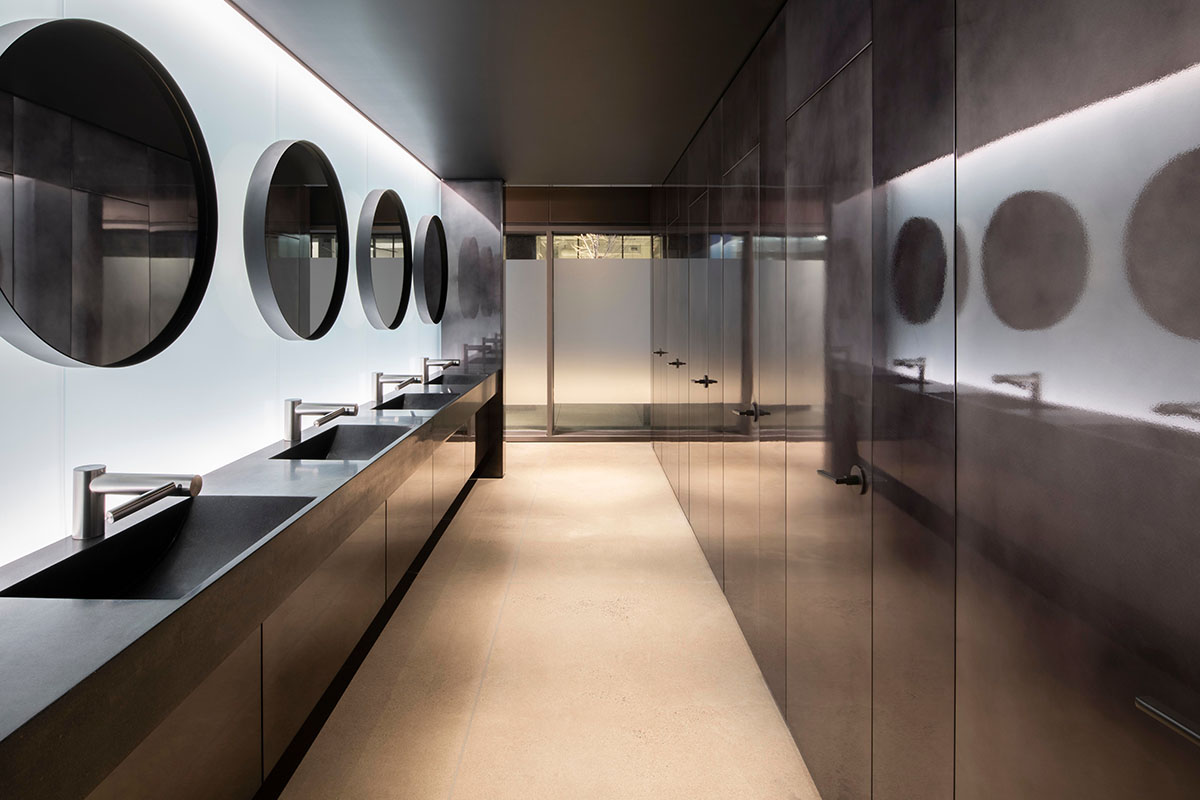 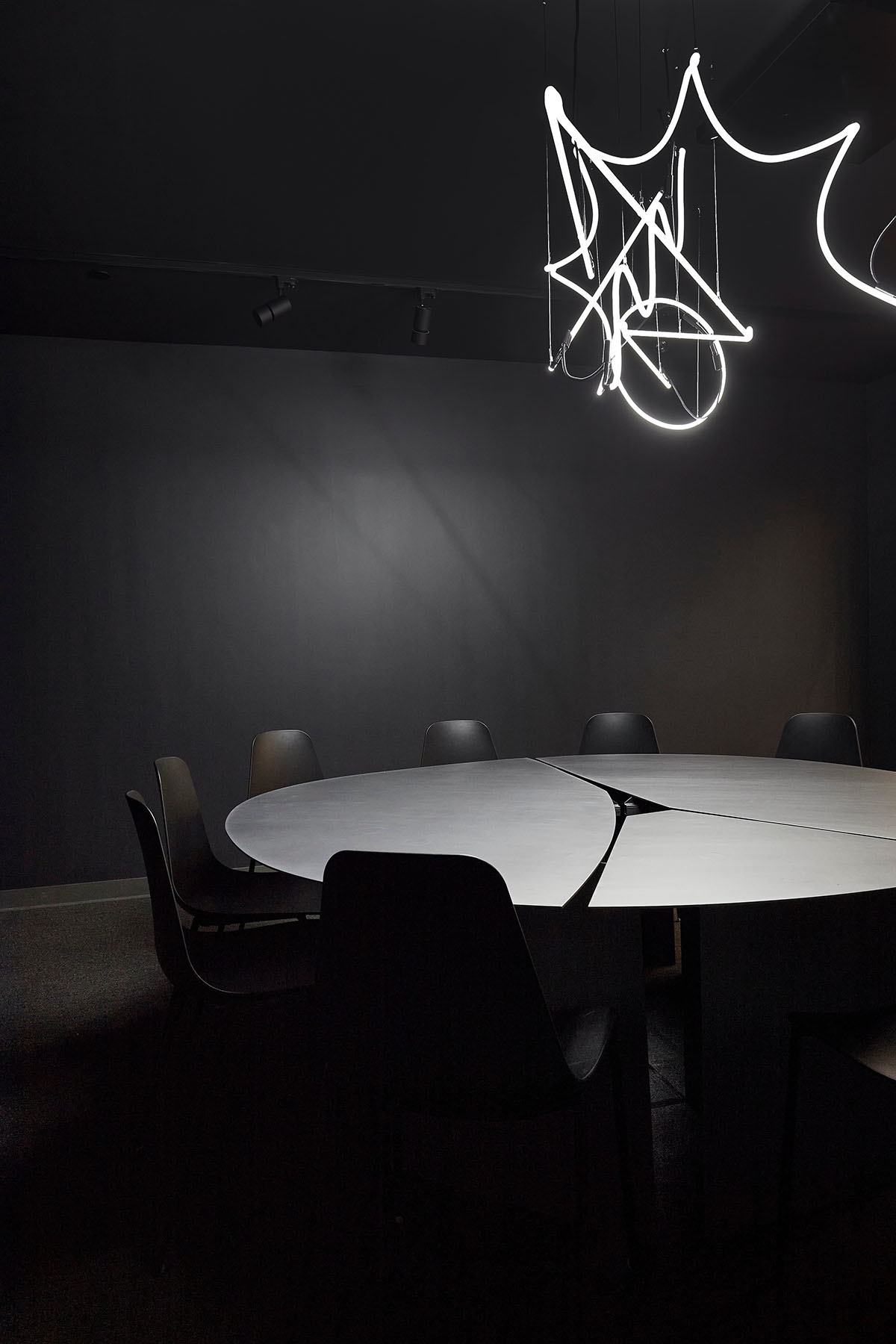 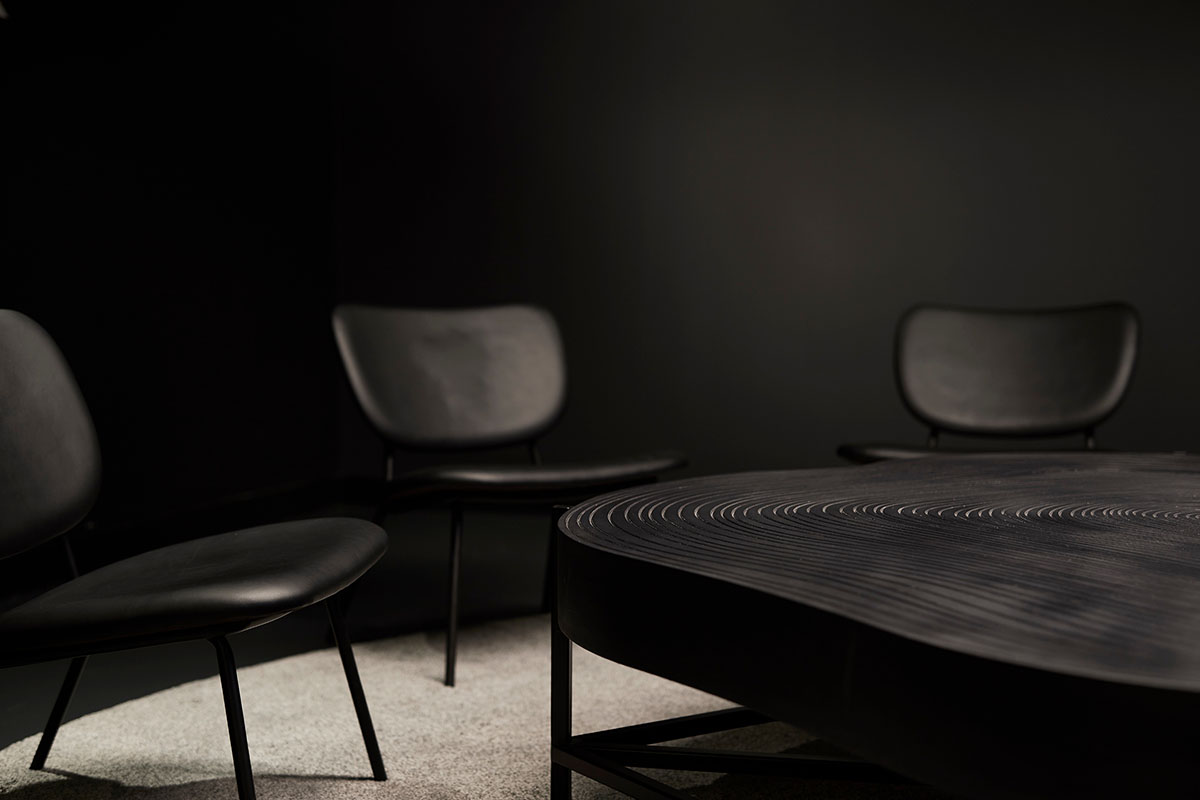 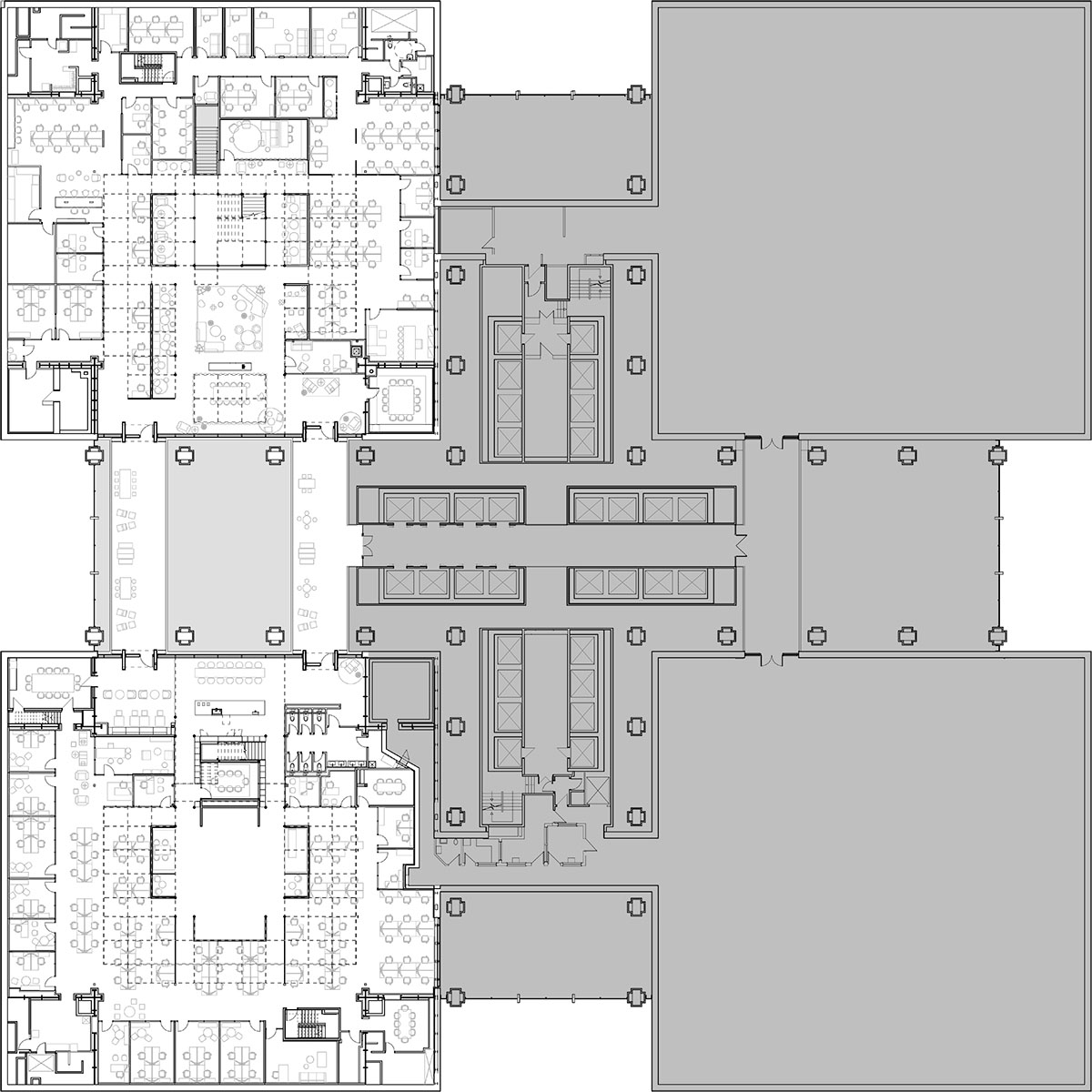 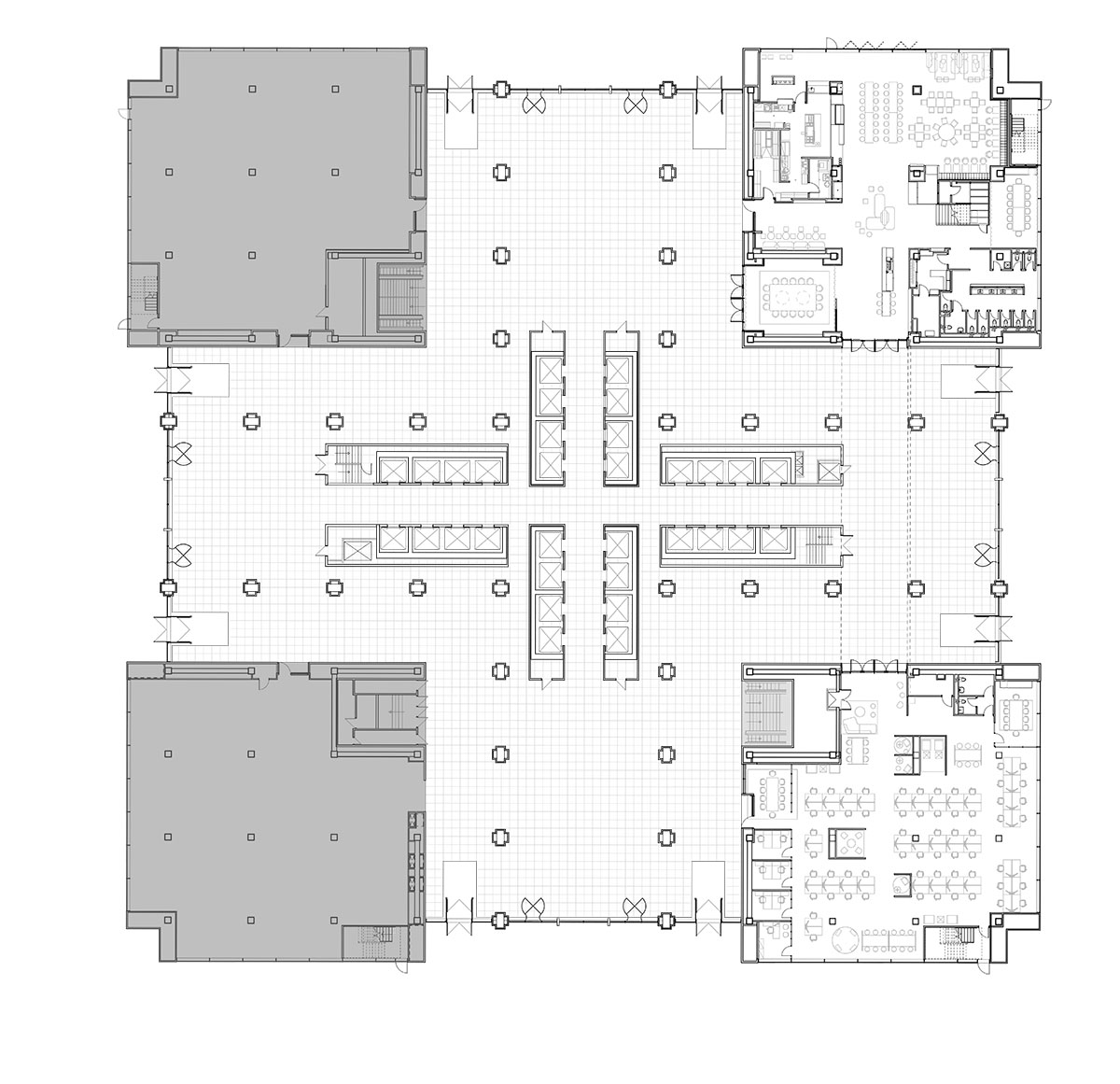 Since 2015, Sid Lee Architecture has been part of Kyu, a new collective of creative businesses established by Hakuhodo DY Holdings, the second-largest network of agencies in Asia.