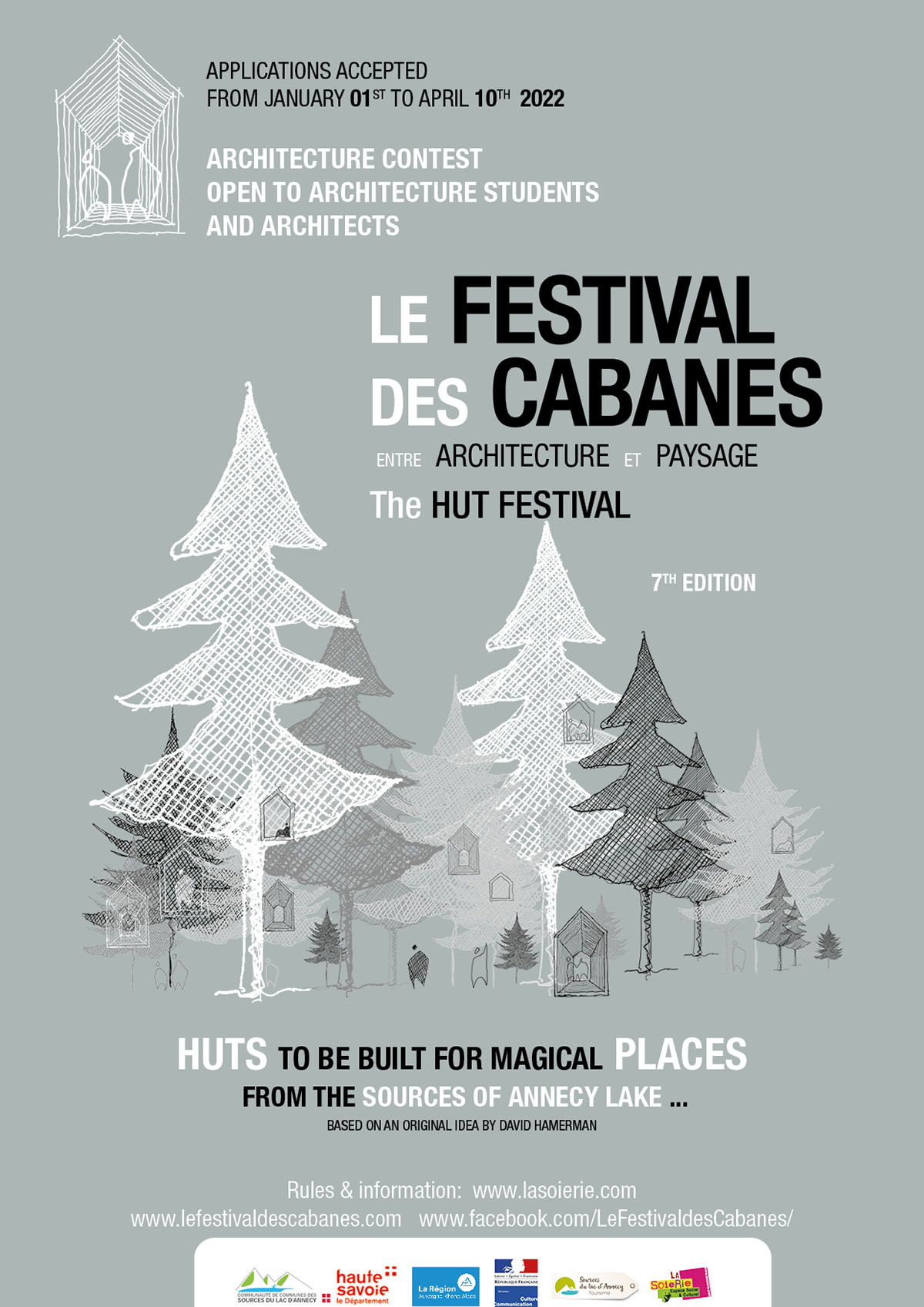 "A hut is a magical place that sends us back to our childhoods, through imagination and tales. This is the inspiration for an architectural contest launched in the area of the Annecy Lake Springs federation of municipalities."

"The contest idea was developed by architect David Hamerman and is open to architecture MA students and graduated architects. The aim is to create twelve huts that will be set up in twelve symbolic places throughout the Annecy Lake Springsfederation of municipalities, situated between Annecy and Albertville."

A FESTIVAL OF CABANES WHY...?

The community of the communes of the Sources of Annecy Lake develops on a territory of 167 Km²with 7 municipalities including: Chevaline, Val de Chaise, Doussard, Giez, Lathuile, Saint-Ferréol and Faverges-Seythenex. Going through this territory we can affirm that its geographical specificities and the quality of its landscapes, make it a remarkable place, on which any intervention requires some prudence...

The idea of this event around the theme of the hut, is intended to educate all the stakeholders in the country on the issue of a great territory and how to settle there. The hut as a built building, represents only a point of view, a milestone, a punctuation mark, a landmark that gives the stroller the opportunity to be located within a larger landscape. It is the camera focused on a chosen point of view.

A FESTIVAL OF CABANES WHY … ?

Why ? How does it fit into the local economy? The cabin is the first intervention built by the man in Mountain territory. It is the first version of the chalet, the wooden house. It represents this balance between nature and culture. It is a building that uses the materials of the site to allow the man to live.

THE CABIN, A POETIC AND REASONED DEVICE THAT LINKS NATURE AND CULTURE.

The hut in the archetype it represents, brings us back to childhood, a form of simplicity forgotten by the contingencies of a world drowned and sanitized by standards and regulations. The universe of the cabin rebalances the relationship between nature and culture. For the child it is both a refuge and a bridge. A refuge because it emancipates it’s young inhabitant from the adult world. It is the place of hidden treasures, first secrets and first steps towards independence. A bridge because in its development, it brings us back to the origins of humanity: build a shelter to protect oneself, in a place in direct relationship with nature and landscape.

The huts will be just a pretext to propose and share another look at our 7 towns and their geography. 12 huts in resonance with 12 places and probably 10 communes. These places represent the essence of the device. They must allow a simple and radical relationship with the different elements of the landscape that make up Haute Savoie: lakes, mountains, rivers, forests, plains and cultivated hills. It is by this way, that the festival of the huts, will try to give again meaning to the relation which we maintain with our environment. In a society where the landscape has become a consumer product, the idea is to offer another look at the territory.

Cabins can be floating, perched, on stilts, highlighted or camouflaged. As regards their materiality, it is important, first of all, to limit it to wood. The types of wood used will have to be part of the species found in the Savoyard forests. Partnership with local sawmills and the NFB is essential. An inventory of the elements available for the construction of the huts will have to be proposed to the designers.

If the expression wants to be free it is imperative to keep a form of measurement in the dimension of the buildings built. Cabins should not exceed 6 m2 maximum. The partnership with the NFB and the local sawmills is fundamental.

Thus, the huts can be built of sawmill wood or branches from local forests.