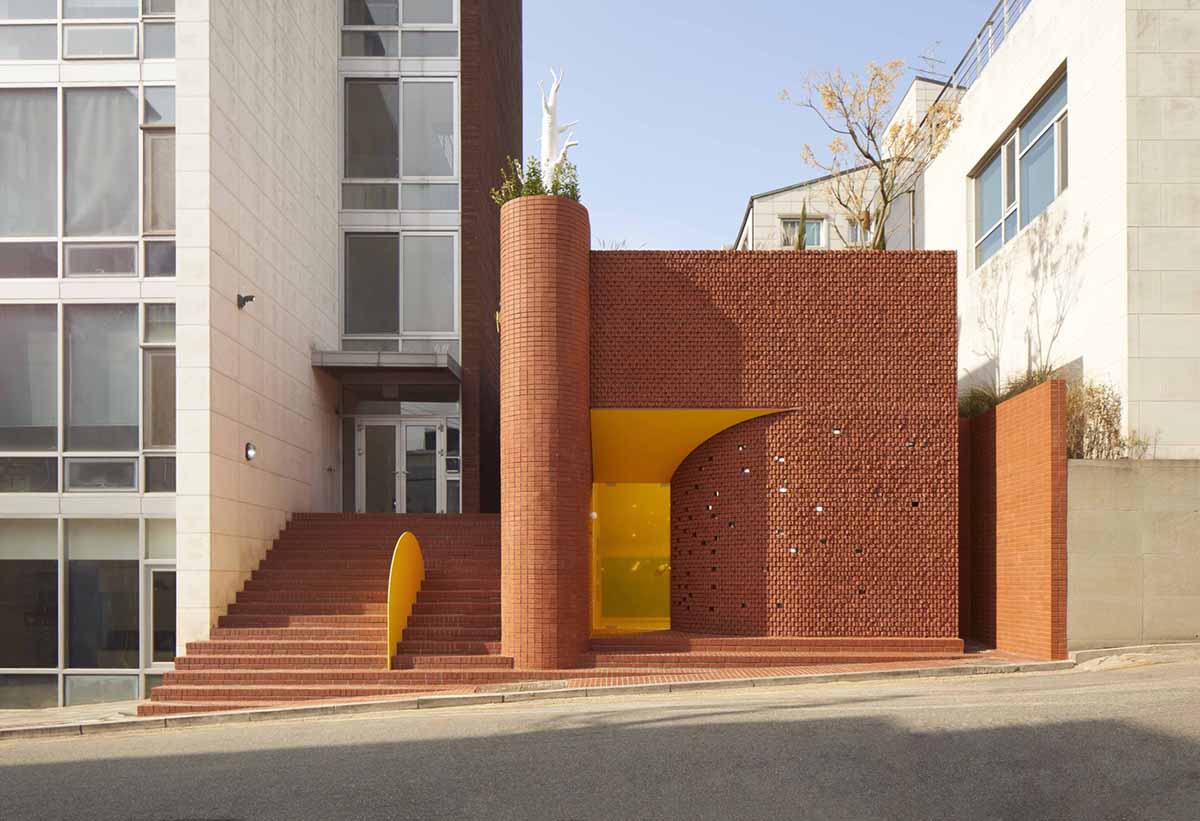 Named Roly-Poly Cotto, the 1,015-square-metre building acts as an infill restaurant with its playful façade designed by studioVASE, a South Korean architecture studio.

While the building doesn't reflect its function from outside, the building is quite surprising, intuitive and interesting to discover once customers enter in the building. 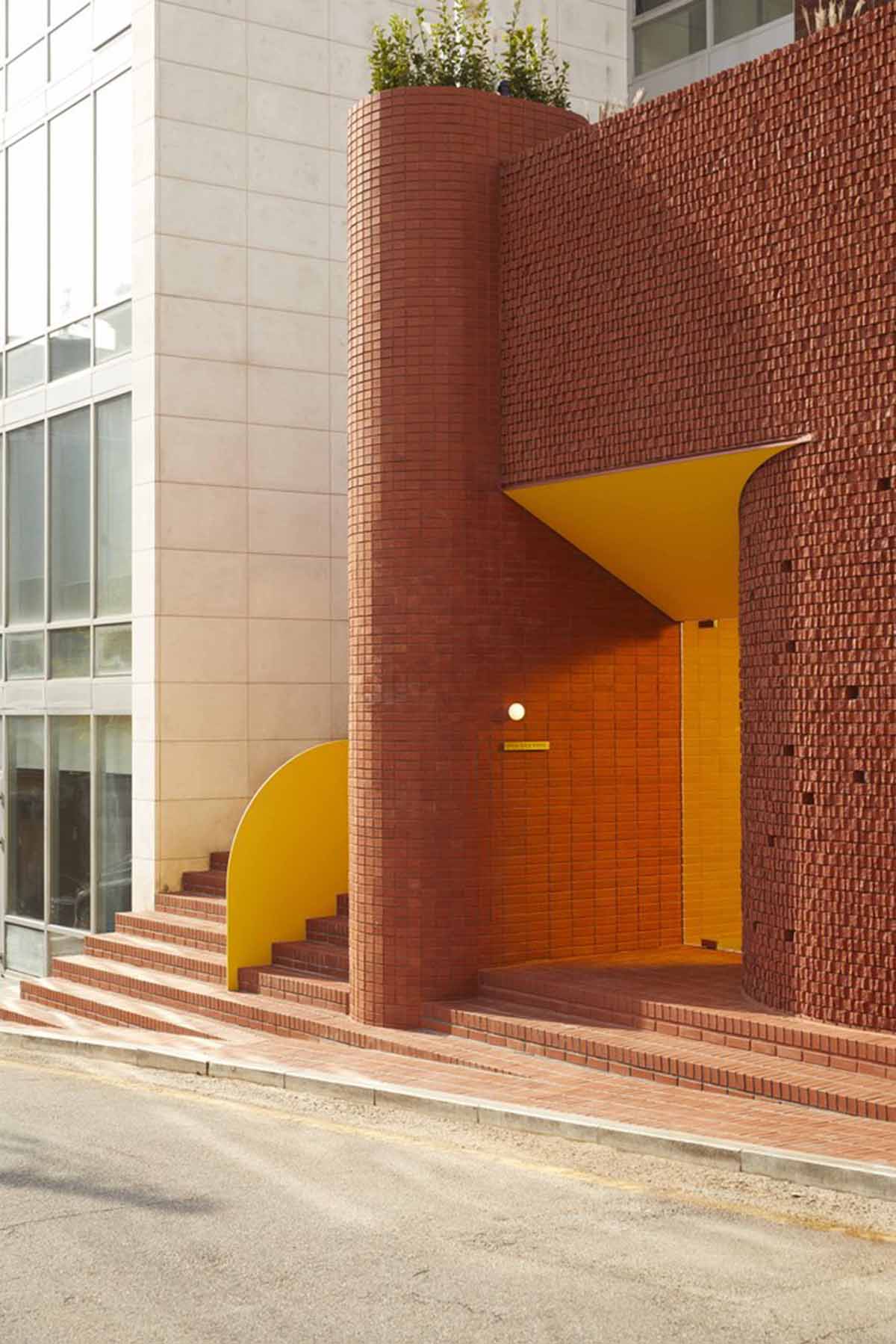 Designed for South Korean food manufacturing brand Ottogi, the architects wanted to create a special story that connects body and mind in a new spatial arrangement that plays with colors, patterns, organization and materials.

"No matter how the visual completeness of the space is excellent, if the story is too simple or poor, if it is very similar to something, the users are not interested in it or feel empty," said studioVASE.

"Even if all the restaurants in the district are disguised as original, eventually, the scene, people just line up only one famous one, means its identity makes others imitators."

"The true origin story makes emotions and various interpretations. The space has the possibility of being complete only with the soul of the story," the firm added. 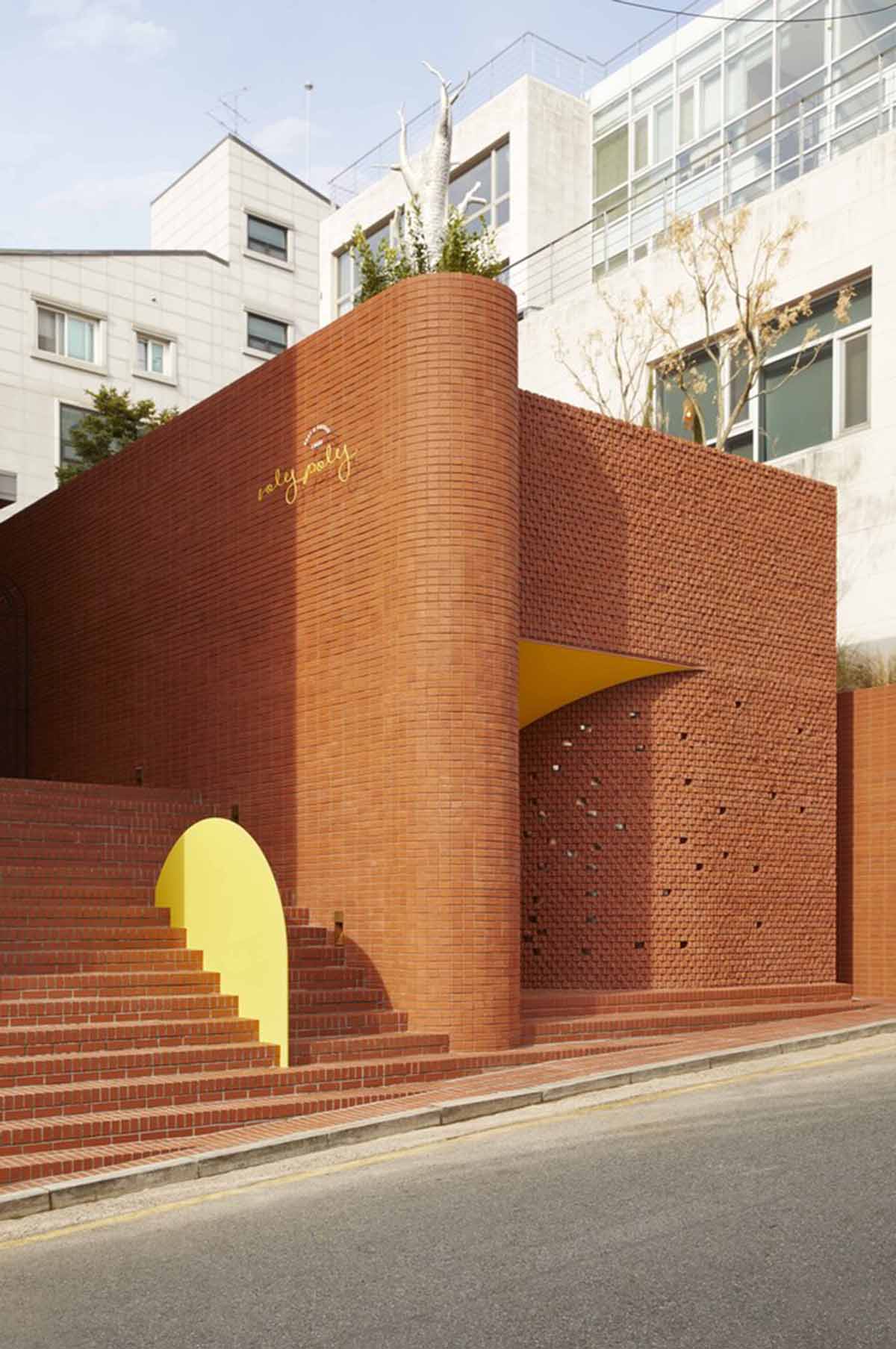 According to the studio, although numerous brands have their own stories, these stories are passed on to the public as the brand image and become the mixed symbol of positivity and negativity.

"Ottogi has good and healthy images, but conservative and loutish images at the same time. Thus, the brand is not relatively progressive or elegant. It would be an obvious thing for the future to the company that shows and experience the new image of Ottogi, which has overcome this dilemma, to 20 ~ 30’s generation. So, the company actively accepted our proposals, and it was quickly promoted," the studio continued.

Roly-poly Cotto is conceived as a project that involves and intervenes in all stages of design - starting from naming, spatial planning and design, styling, product design, and even graphic design. 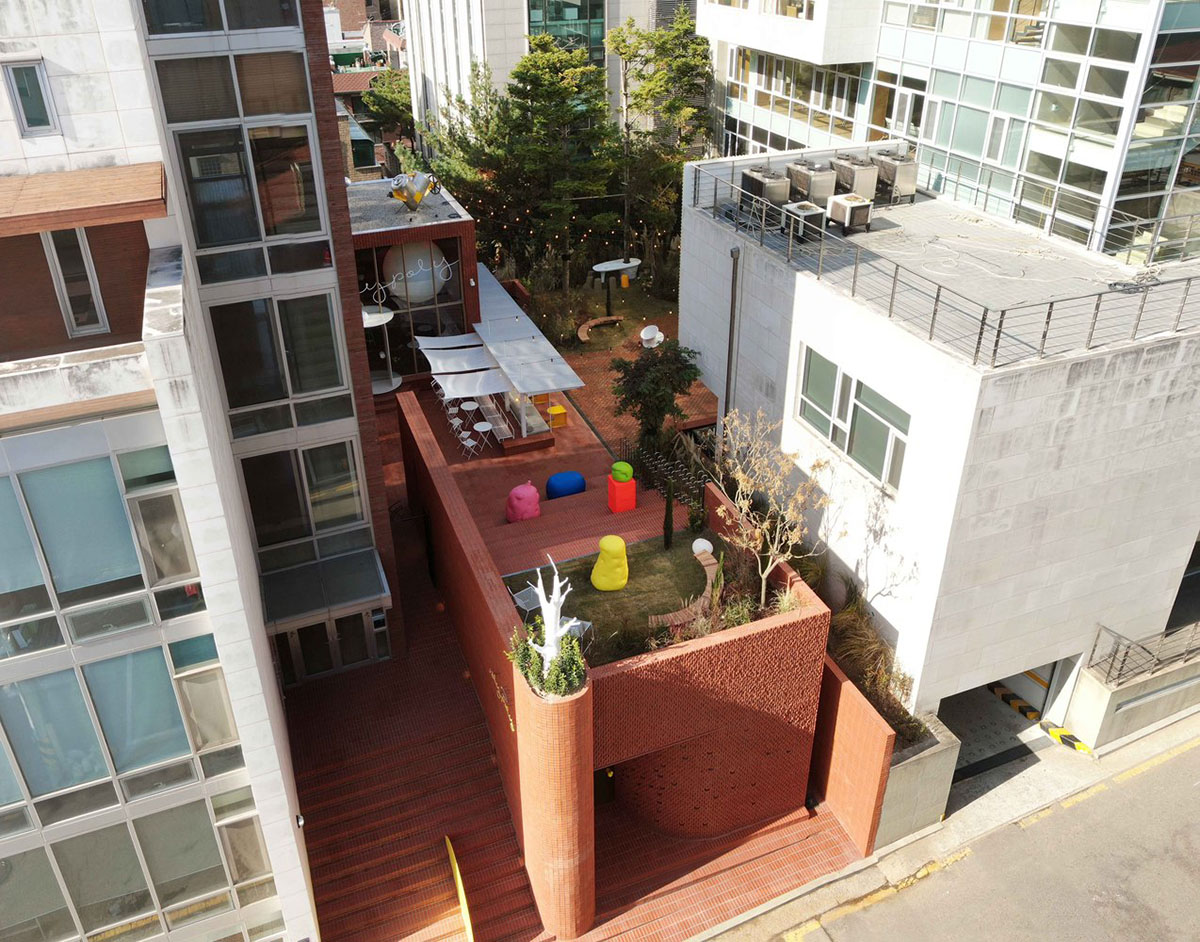 Initially, in the project brief, the space was planned to sell curry and ramen on an area of about 265 square meters, and 80 pyeong, but was expanded to about 310 pyeong by suggesting the possibility of expansion through using remaining space.

The simple composition just selling ramen and curry made the architects expect to serve as a symbolic space that would give a complex function on the expanded space and make consumers impress the brand’s new image.

"However, it needed a metaphorical interpretation that could appeal to the young generation while avoiding the brand’s direct expression," the architects emphasized. 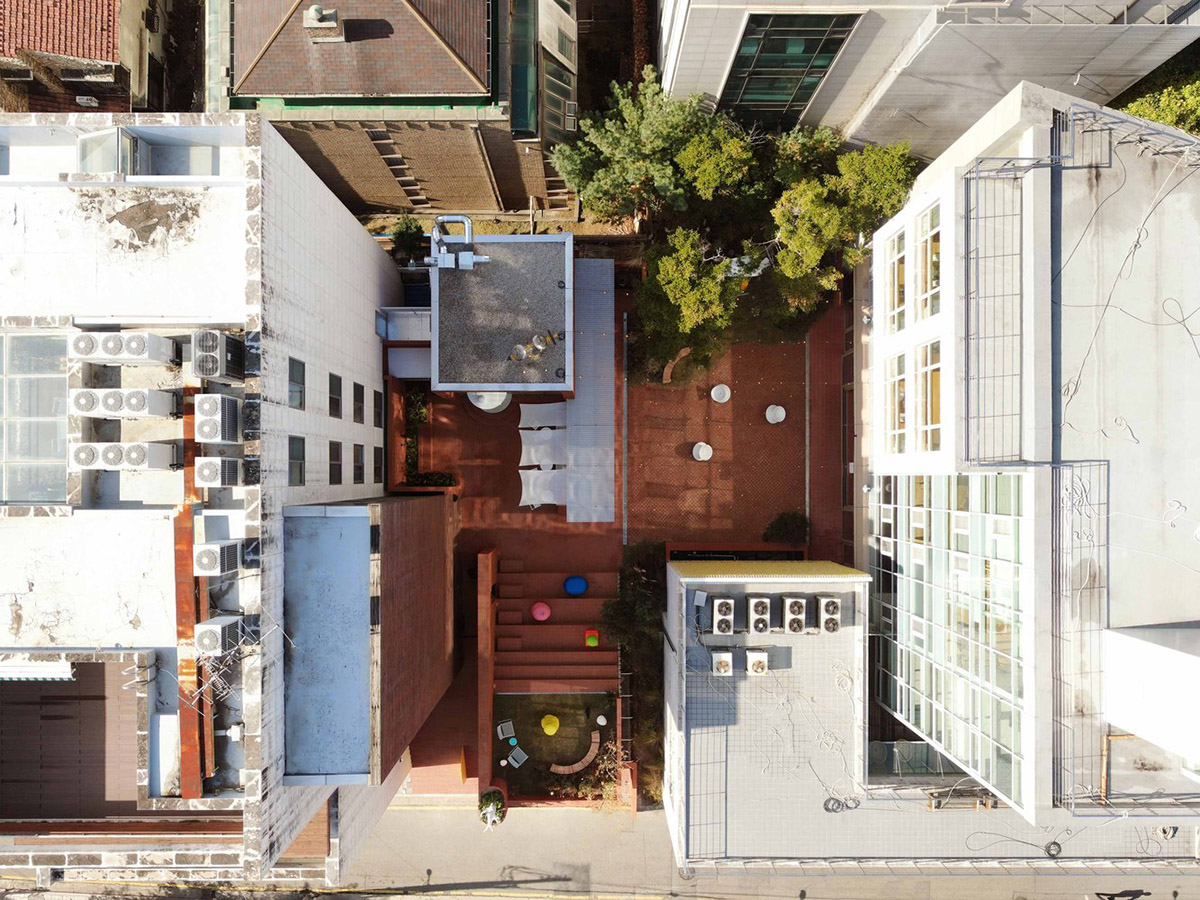 While creating the project, composition of Space was the key element of design, for this reason, the team combined the gardens hidden in two existing buildings into one, to secure the widest area in the whole space, and to provide a medium.

The interior space is divided into six zones formed a relationship through this garden to perform each function. 7 spaces divided in the order of cave, cube, slope, shade, garden, hall, and sala, have different roles and heights and provide various sequences.

For material choice, the architects select red brick as the main material. According to the team, the red brick is a material that contains universality and persistence and builds the structures by gathering small cells.

They used bricks, made of 100,000 blocks, which are like the conservative nature of materials that has been kept over the years, and the meaning of the corporate spirit which has developed steadily. 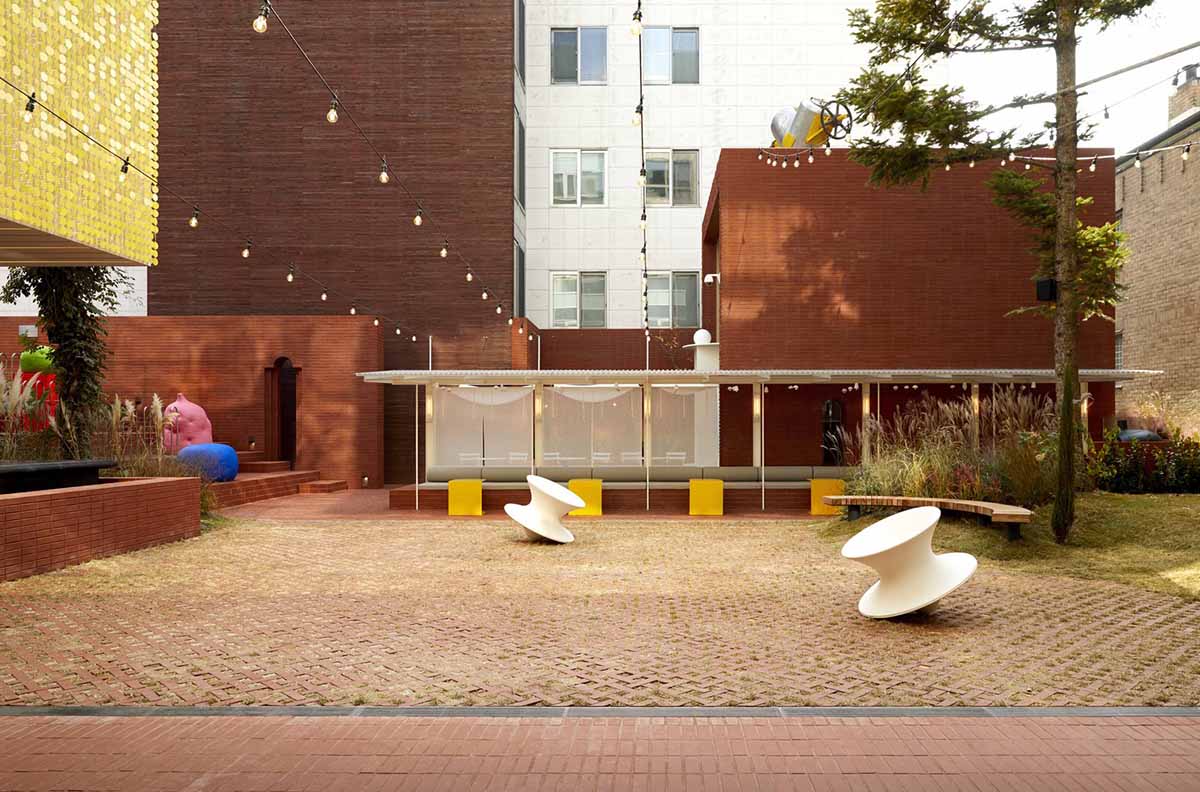 "The various construction methods and patterns of the bricks are performance that overcomes conservatism. Moreover, yellow is the symbolic color of the Ottogi," the studio continued.

"The yellow gives a completely different feeling depending on the color, brightness, chroma, area of use, so we decided not to insist on the brand’s symbolic color but to focus on delivering the image of the color."

Inside, the design team applied basic materials such as wood, fabric, and ceramics that are suitable with the bricks, the main material. However, the studio used stainless steel for the rhythm of the material, thus, they cut every single segment so that it could feel the temporality. 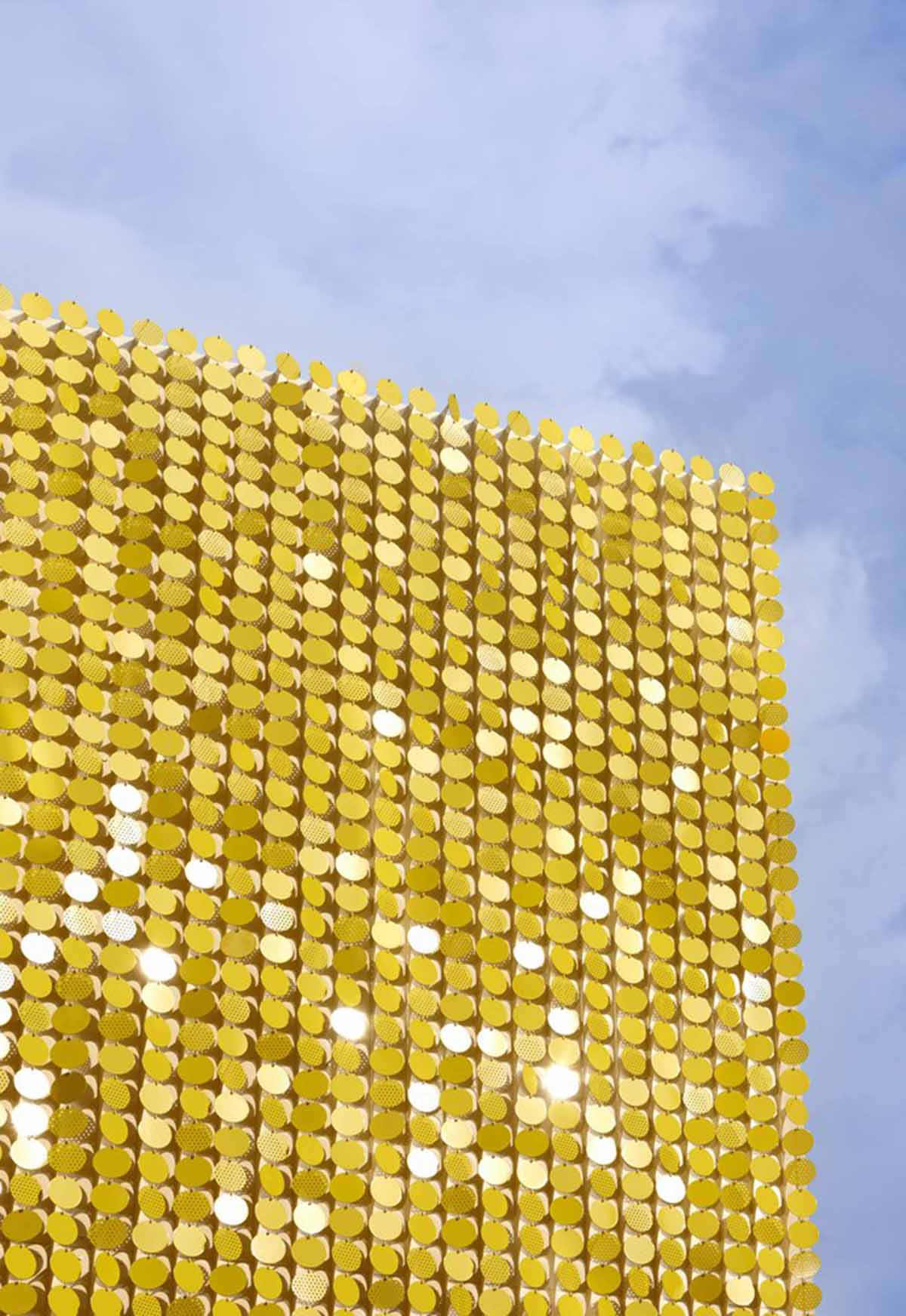 The cave-like façade facing the road is designed as a windowless semi-basement and a space for selling food and beverages.

The architects hang about 400 fluorescent objects from the ceiling to make visitors feel the landscape of the garden. By using various pattern of bricks, an 8-metre bar and booth sofa, these design elements make the space the main axis of the narrow and long space.

When going up the ground through a narrow vertical staircase, it will meet a cube and a slope facing each other. The cube is a space to sell goods developed for the project. 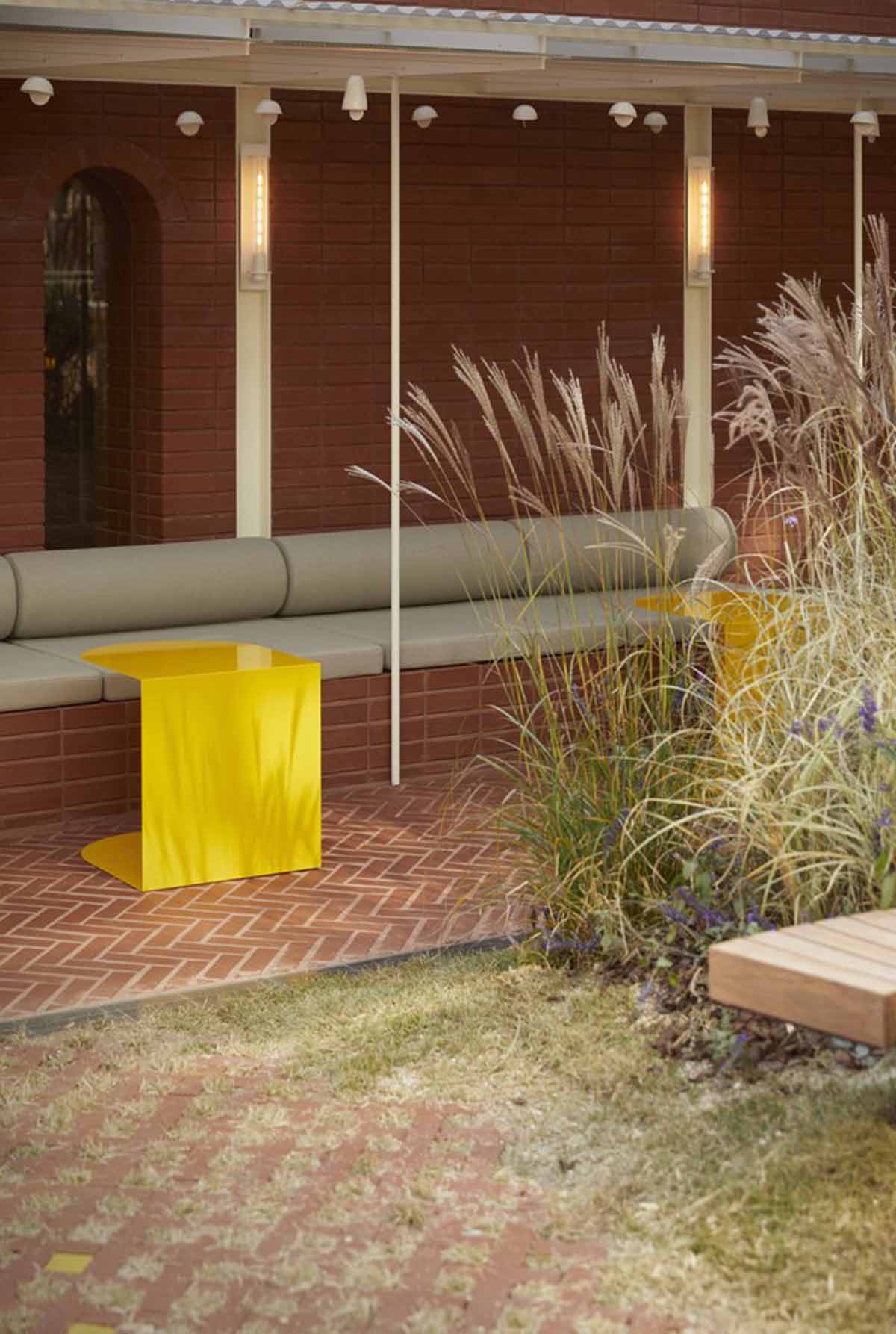 The front wall inside the cube, which is finished with bricks inside and outside is shinny by the light through a thick crack in the brick and looks like the single large metal shelf floats in a curved shape.

The ceiling was hung with large balloons and lights together gives a cheerful atmosphere and making it easy to recognize from the outside. The stair-shaped slopes stacked by bricks are designed to sit more actively, and the small grass space created at the top provides an opportunity to watch the whole garden. 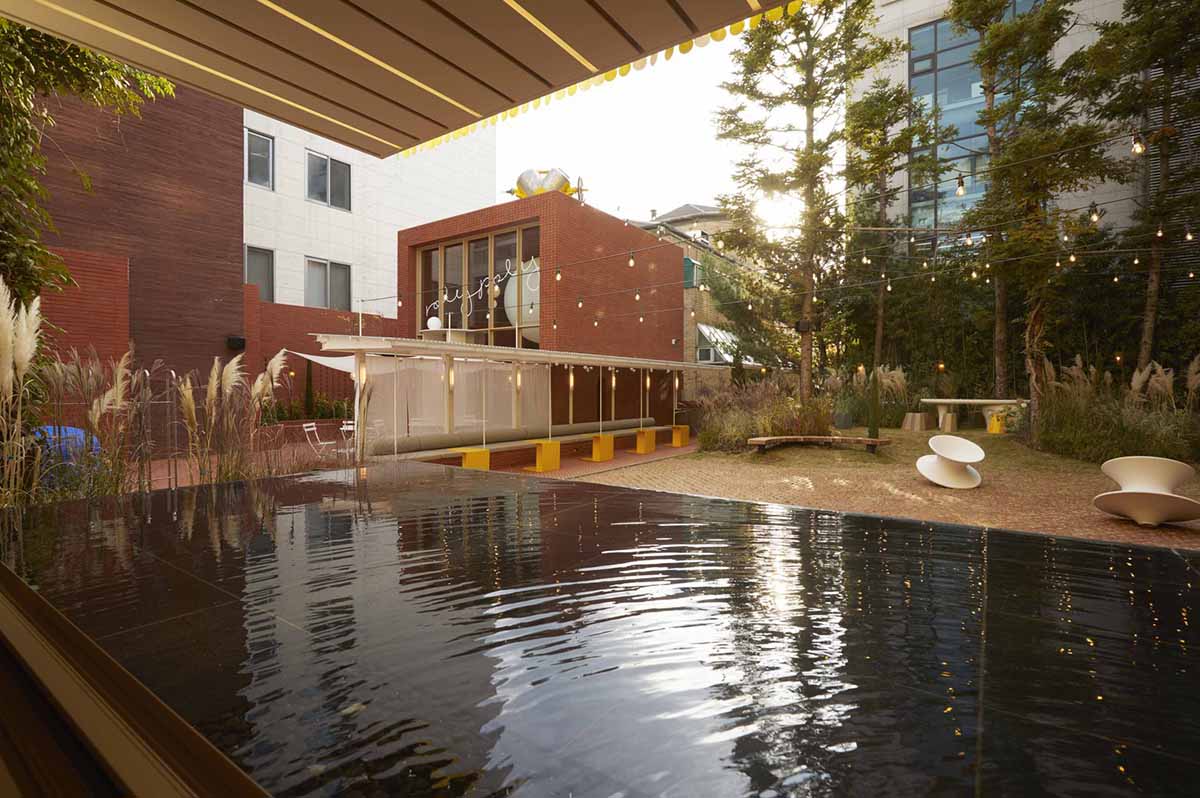 The quality and poetic sensation of the spaces distinguish themselves with the changing materials. "On the stairs, various fluorescent ceramic objects of the artist, Lee Hyun-Jung places, so it would be the source of entertainment for users," added the firm.

"The shades bonded to the cube are finished with the roofing material of punching metal to transmit sunlight and relieve the texture of the hard cube."

"The long form of the shade crosses the garden to the center, but it adds depth making the layers of space at eye level. About 40 landscapes made with ceramic under the roof put there, so even when the breeze blows, the whole senses of the body could feel at the garden," the architects explained in the project description. 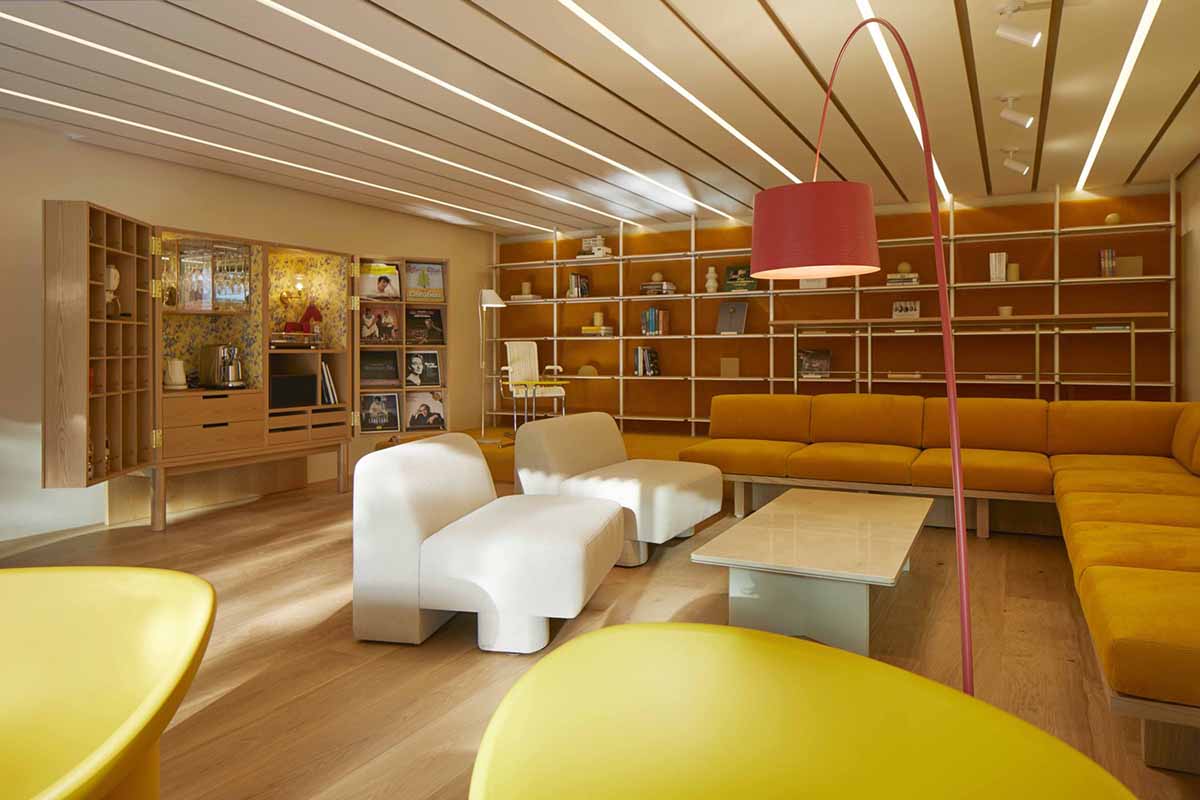 The panels of the metal nets are installed to the ceiling, so that lighting, heating and cooling equipment, and sound equipment are not exposed. A large sliding door installed at the front of the hall opens about 6m, so it connects the hall and the garden like a bridge.

The sala, the last space, is not an open space for the public. But the sala’s front is exposed to the garden. On the front of the square, more than 4,800 yellow spangles respond to wind and light, reflecting the garden. 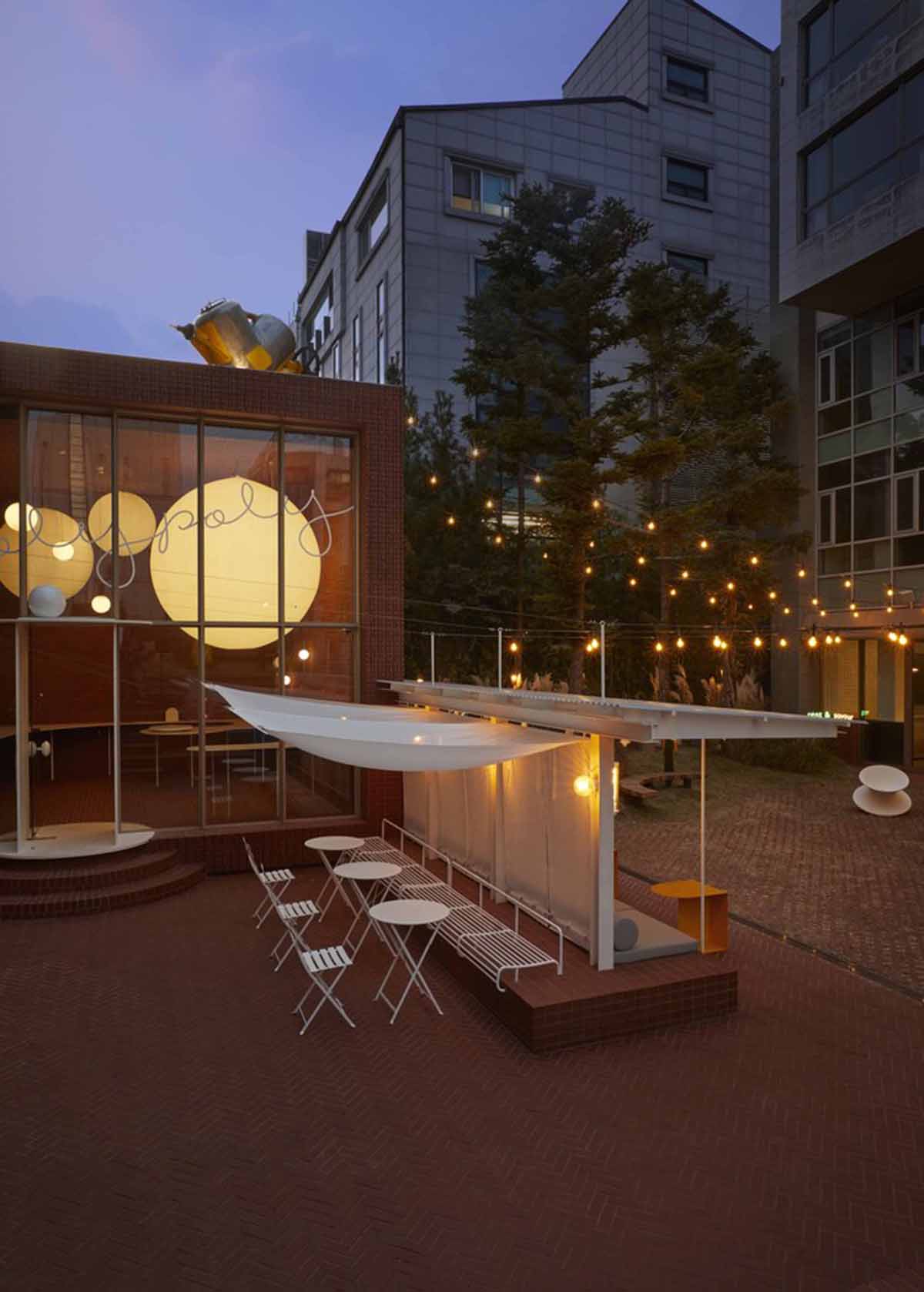 The interior of the Sala is designed to feel cozy and comfortable like a domestic drawing-room. Yellow, the symbolic color of the company, was used but was expressed by various finishing materials to give depth to the colors. Inside the space, there is furniture like a treasure box.

When opening the door of the heavy furniture, tools for enjoying music, coffee, and wine, present users’ entertainment. All sala’s windows are also designed to open so that the entire garden can be viewed through the space. The roly-poly Cotto was the project of understanding and transforming the two different buildings into one concept to create synergy. 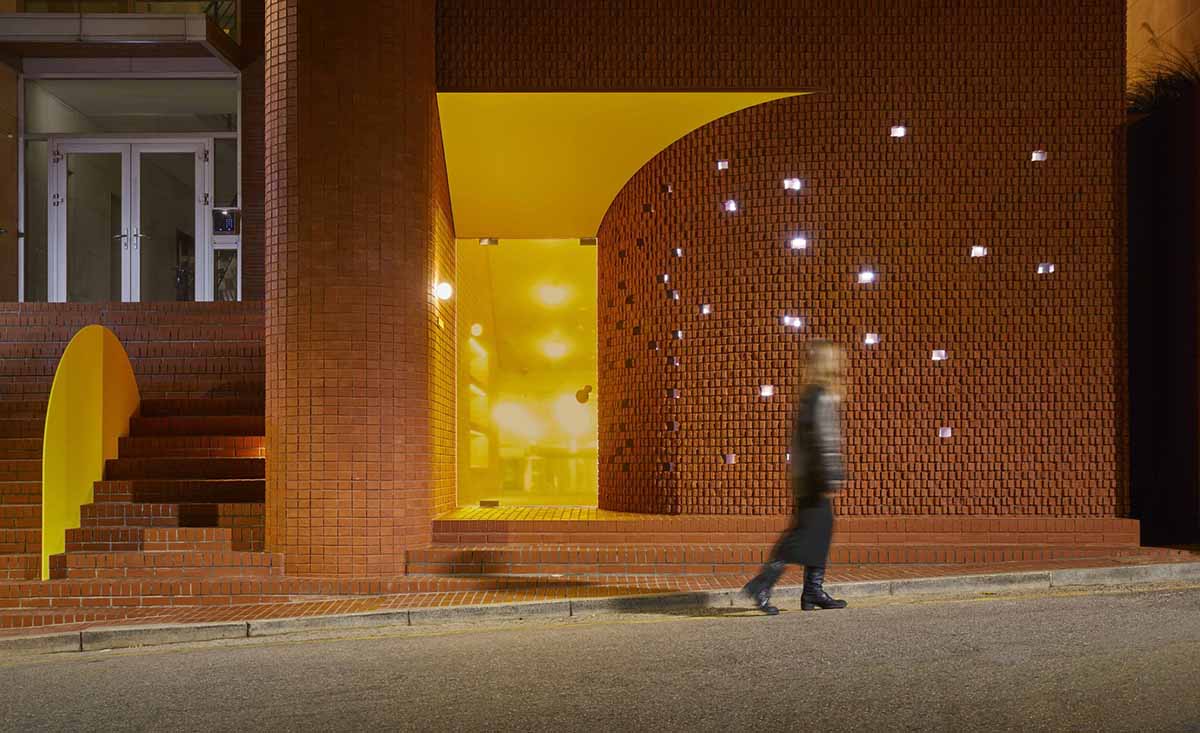 To do that, the studio gave the meanings to each 7 space that was used for unrelated purposes each other, so that they could relate to each other in context over the new story. The newly expanded grass garden was hidden from the outside, so it made users surprisingly.

The various elements inside the garden that stimulate vision, hearing, and touch become a medium to create separate space into one. The image of the firm brick covering the whole is neutralized from the round shape of roly-poly inferred curves and designed to balance the space. 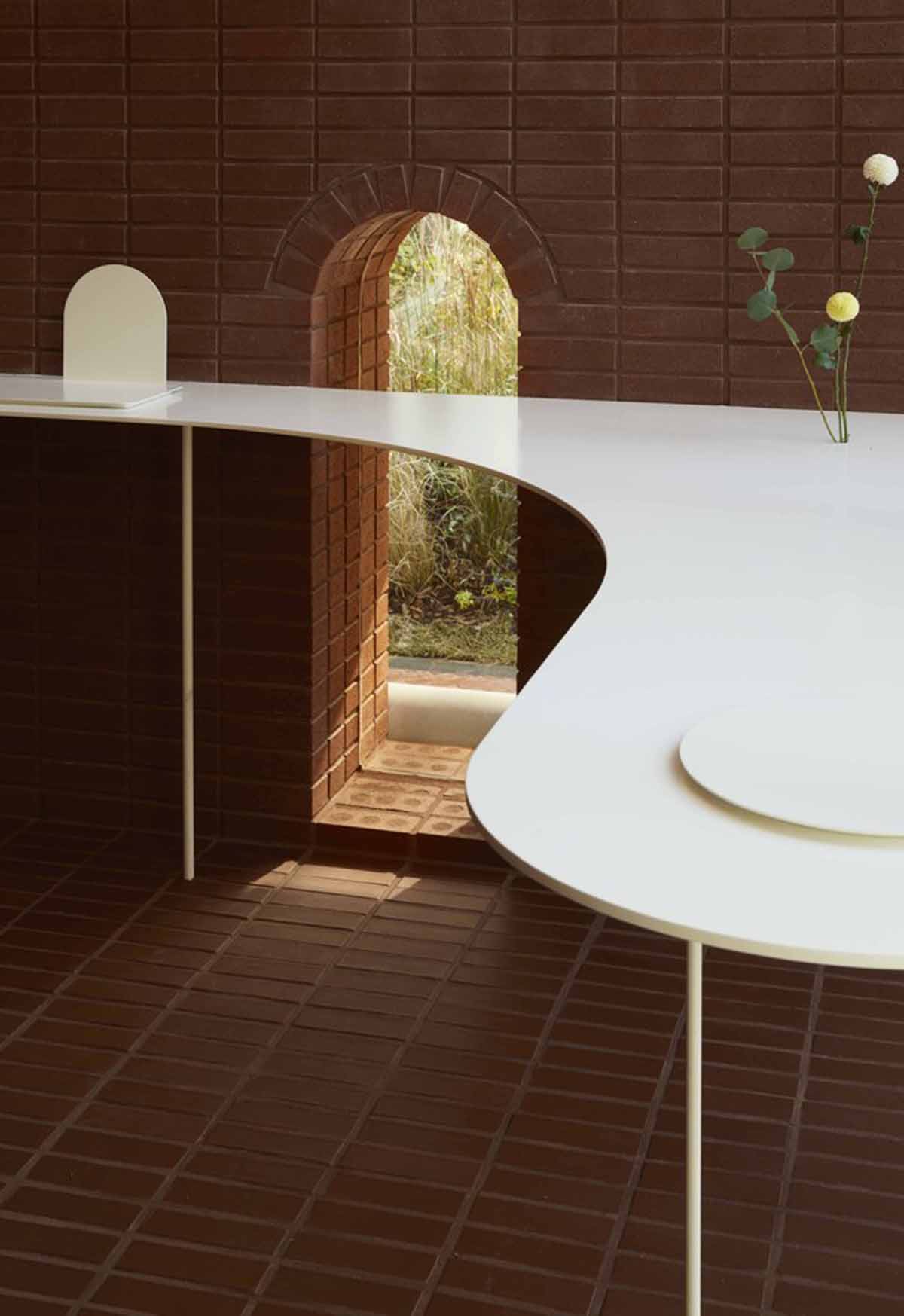 The various different levels of the floor inside the space help users produce various scenes and understand space more in three-dimensional ways. Eventually, the architects expect that all of these relationships will play a role in creating visual entertainment and experience and making the brand’s new image. 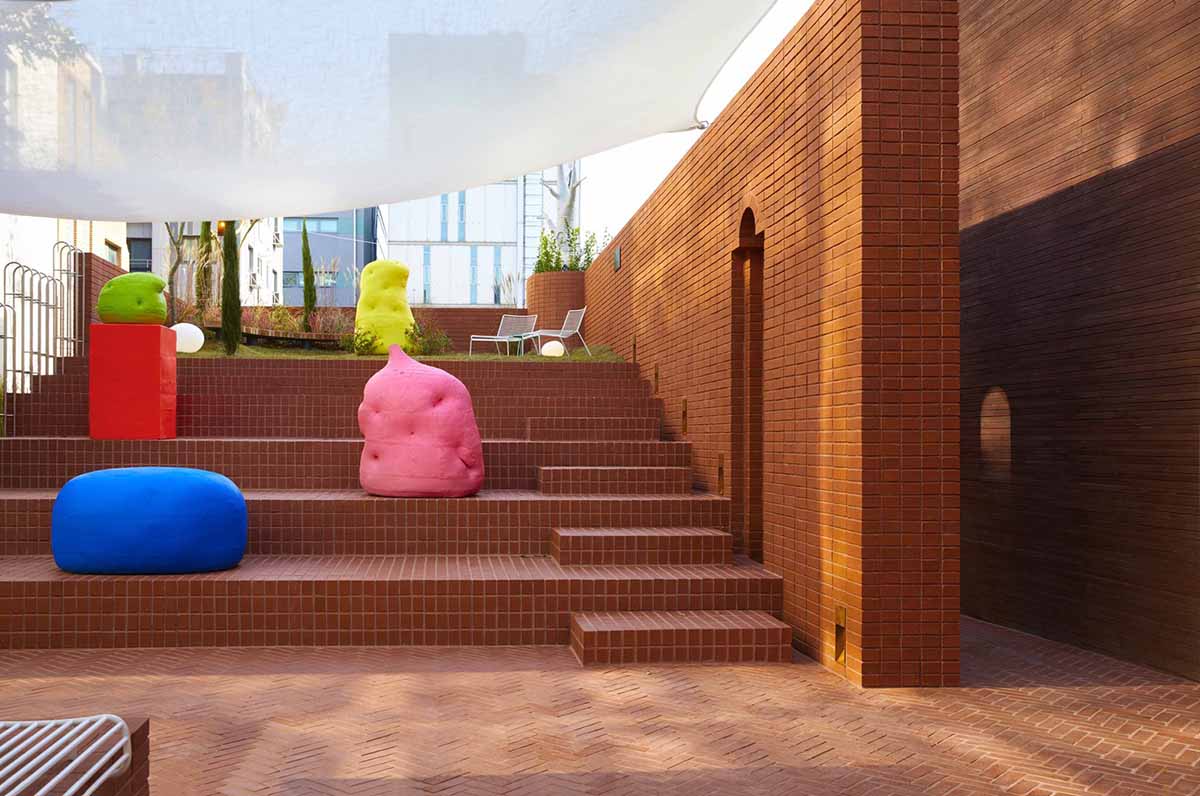 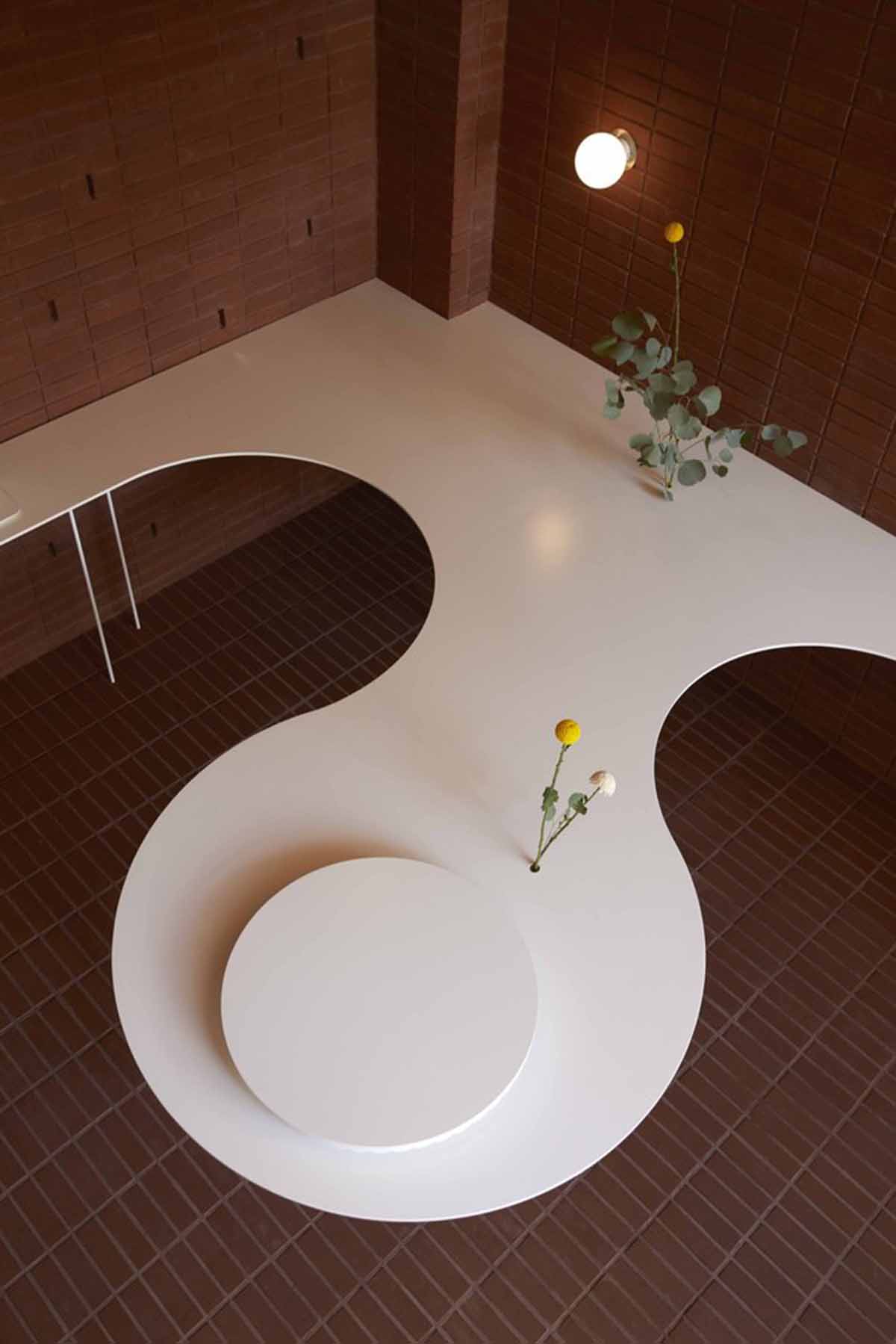 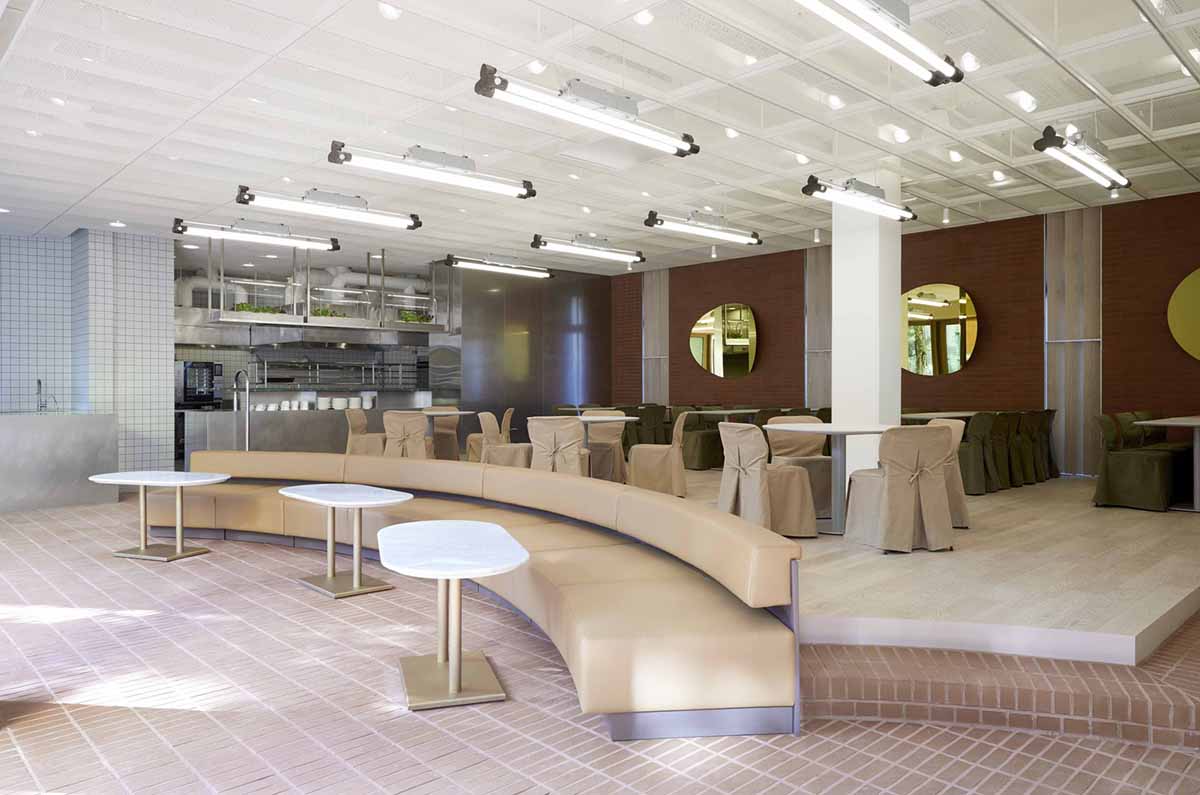 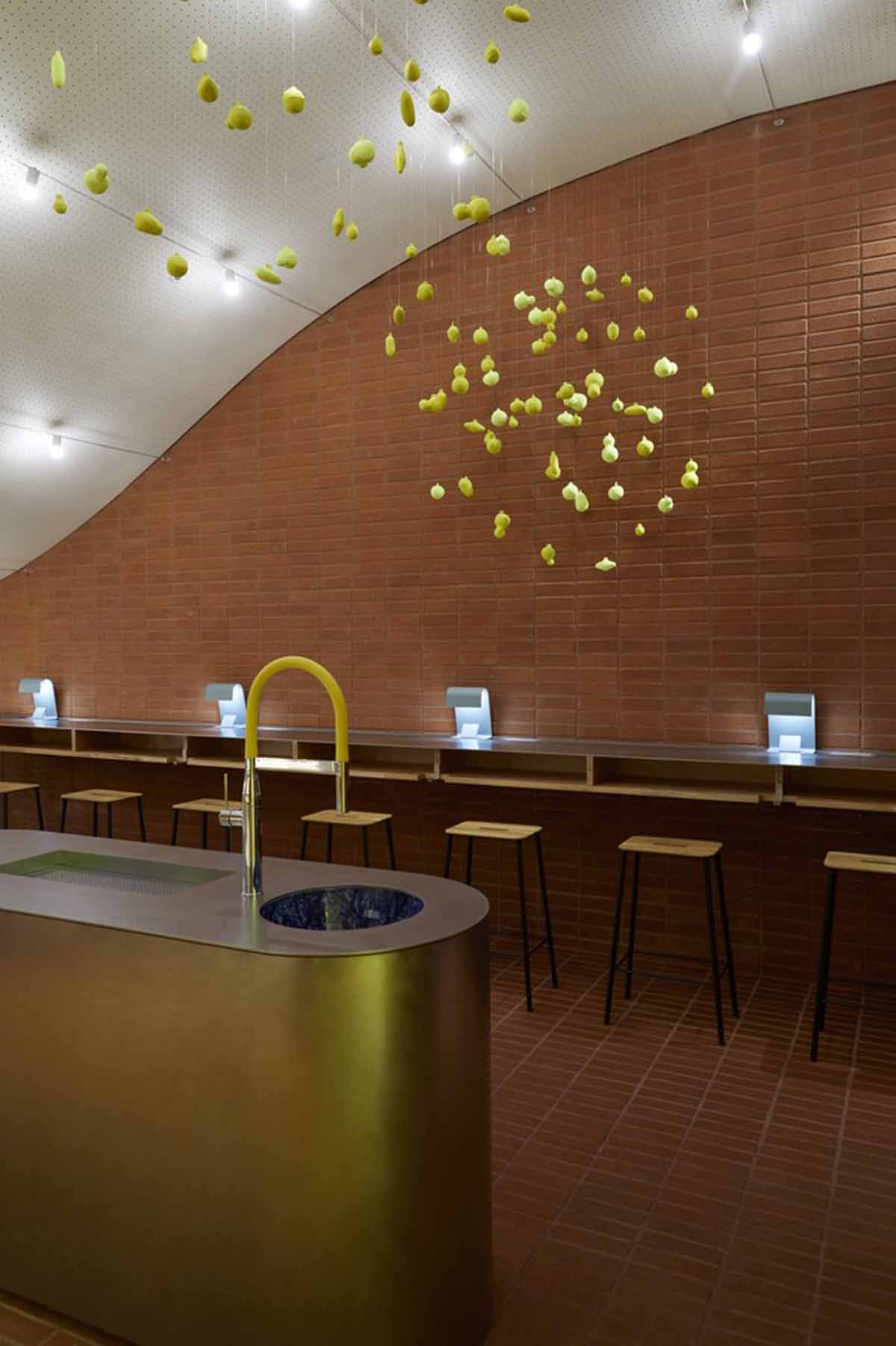 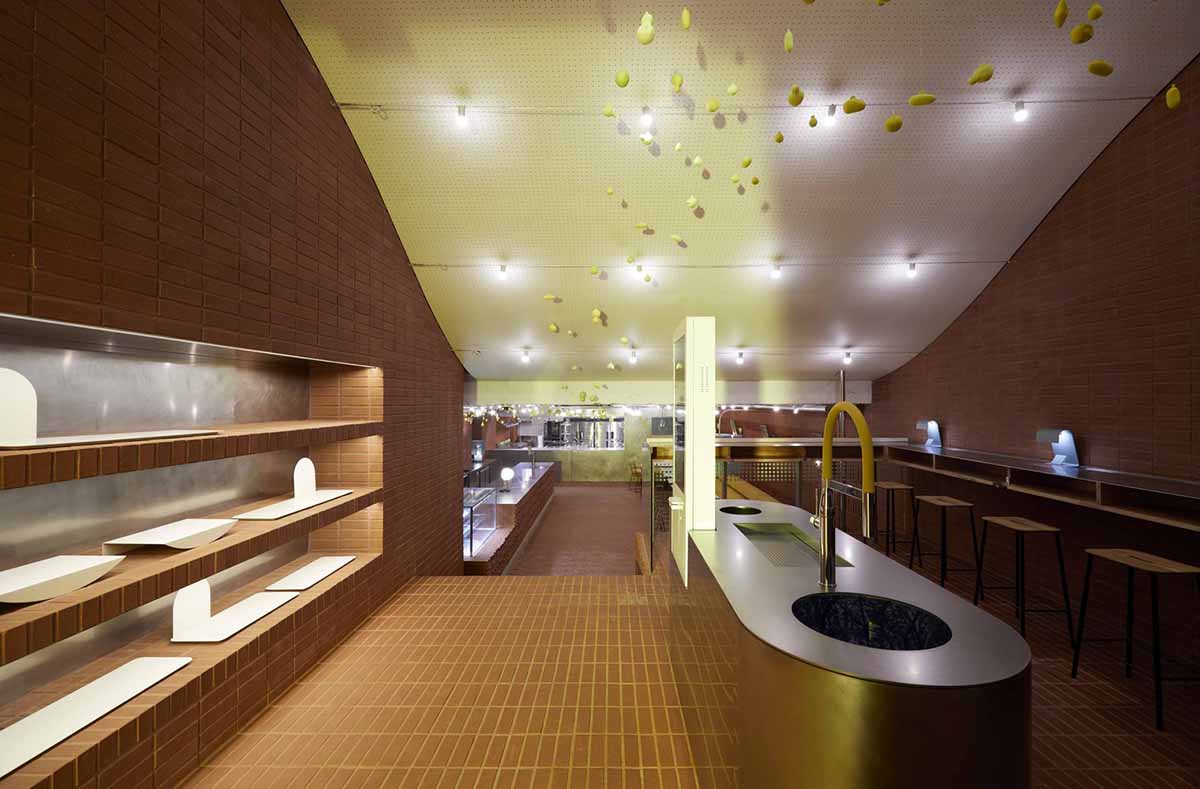 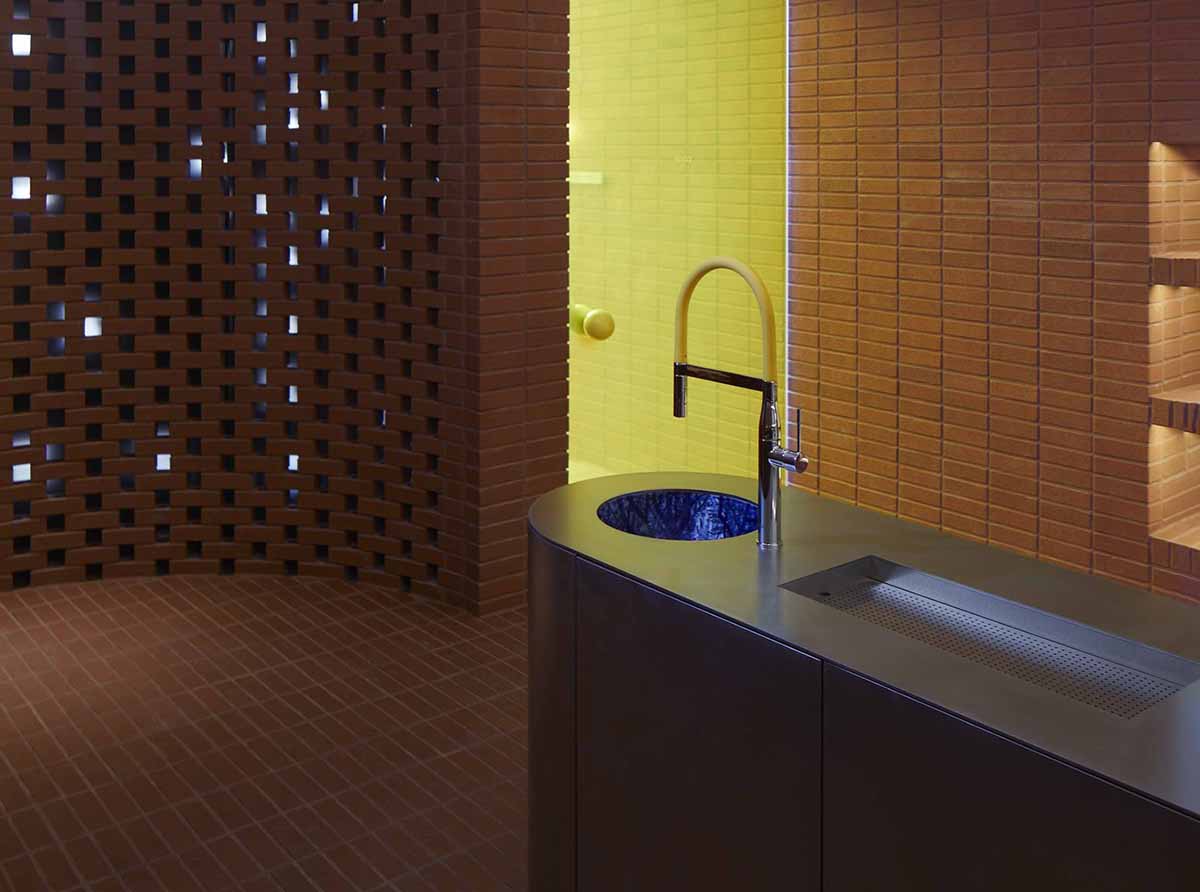 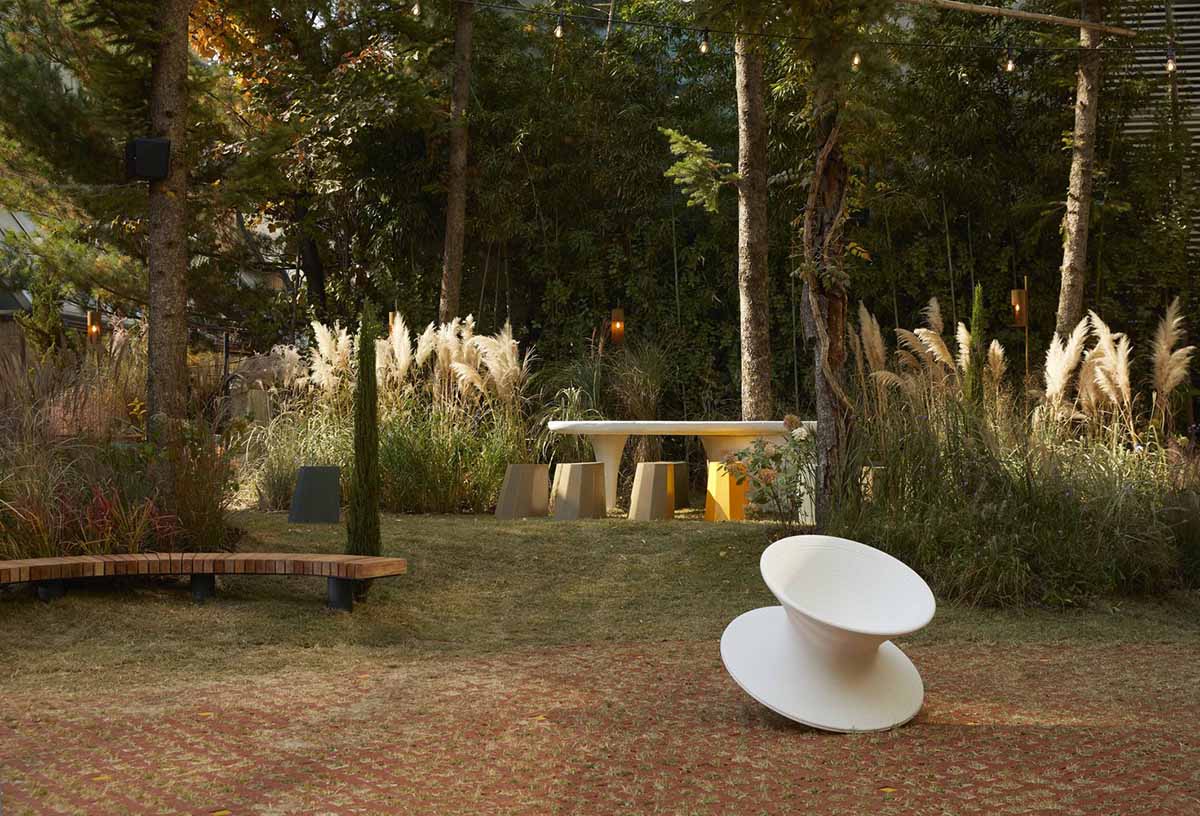 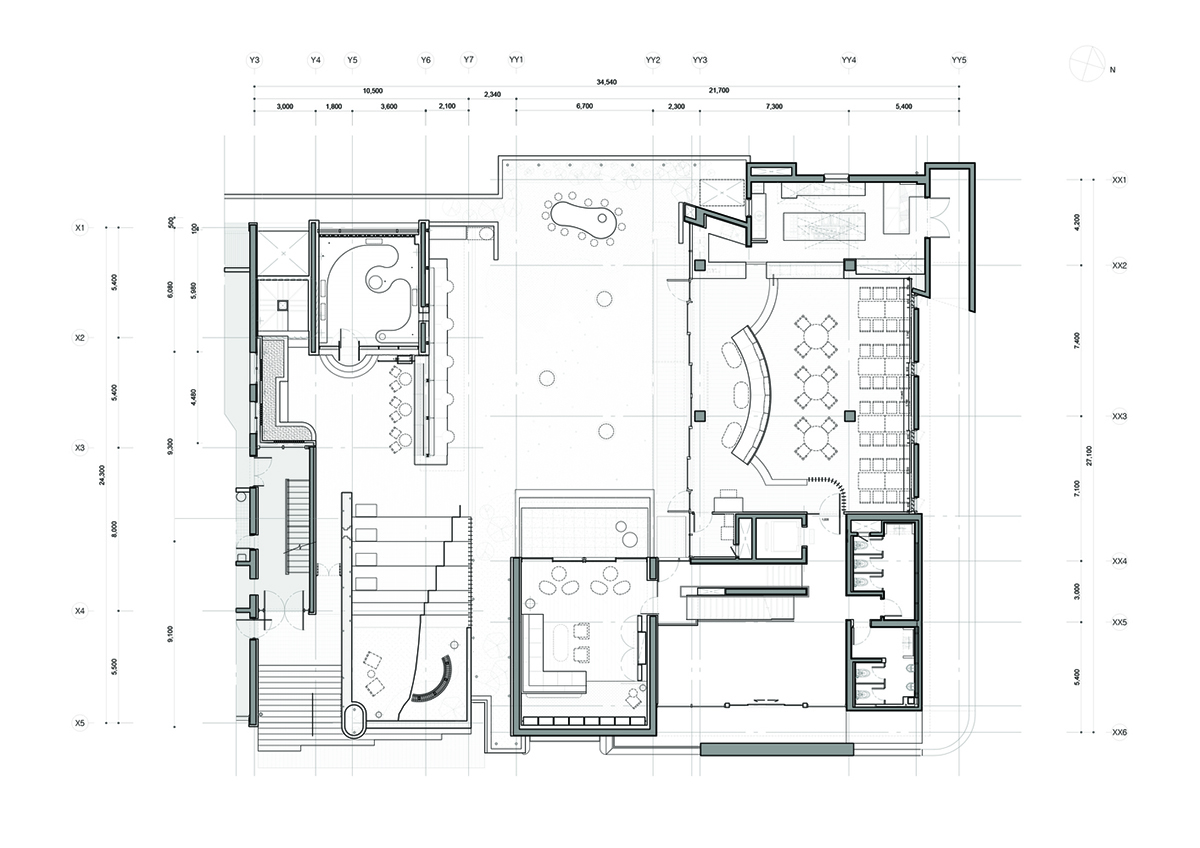