noa* network of architecture has proposed a flexible prototype for Culture and Community Center that can be adapted to anywhere and any condition.

Called CeCuCo, the project, emerging as a research project, comprises a group of repeated triangular modules, creating a kind of façade metamorphosis.

The architects' aim was to create a cultural centre rather than focusing on a fixed context, the CeCuCo prototype is capable of transforming itself to adapt to anyone and anywhere.

noa*'s vision is based on a multifunctional space, while doing that, it needs to translate this knowledge into a sustainable model which is versatile for all situations.

"Among the infinite design possibilities, it was clear from the very beginning which direction to take: to design an architecture that is not indifferent to what happens inside it, a flexible space in which the community can decide, act and makes her moves," said noa*.

The geometry of the project is based on a simple, elementary form: the triangle, a group of triangular modules are repeated in both plan and elevation. In the first case, the triangular module is inscribed in a 3x3 meter square, in the second in 3x1.5 meter.

According to the architects, working with geometries is easy allows to assemble the modules in various forms or expand the cultural centre or contract according to the needs of the context.

"In addition, on an urban planning level, the triangles can combine in many types of shapes, resulting in different space typologies like the slab, the courtyard or the punctiform village," the studio added.

noa* imagines the elevations as a chessboard: some elements can be moved, with certain rules and in certain directions, which it is then up to the people who experience the architecture to control.

Doors can be moved, fanned out, turned on their hinges, lowered, raised, ajar... and the same goes for windows. A wide range of possibilities for an intuitive and playful architecture, made up of moves and countermoves, where the game of action and reaction between community and building gives life to the most diverse scenarios. 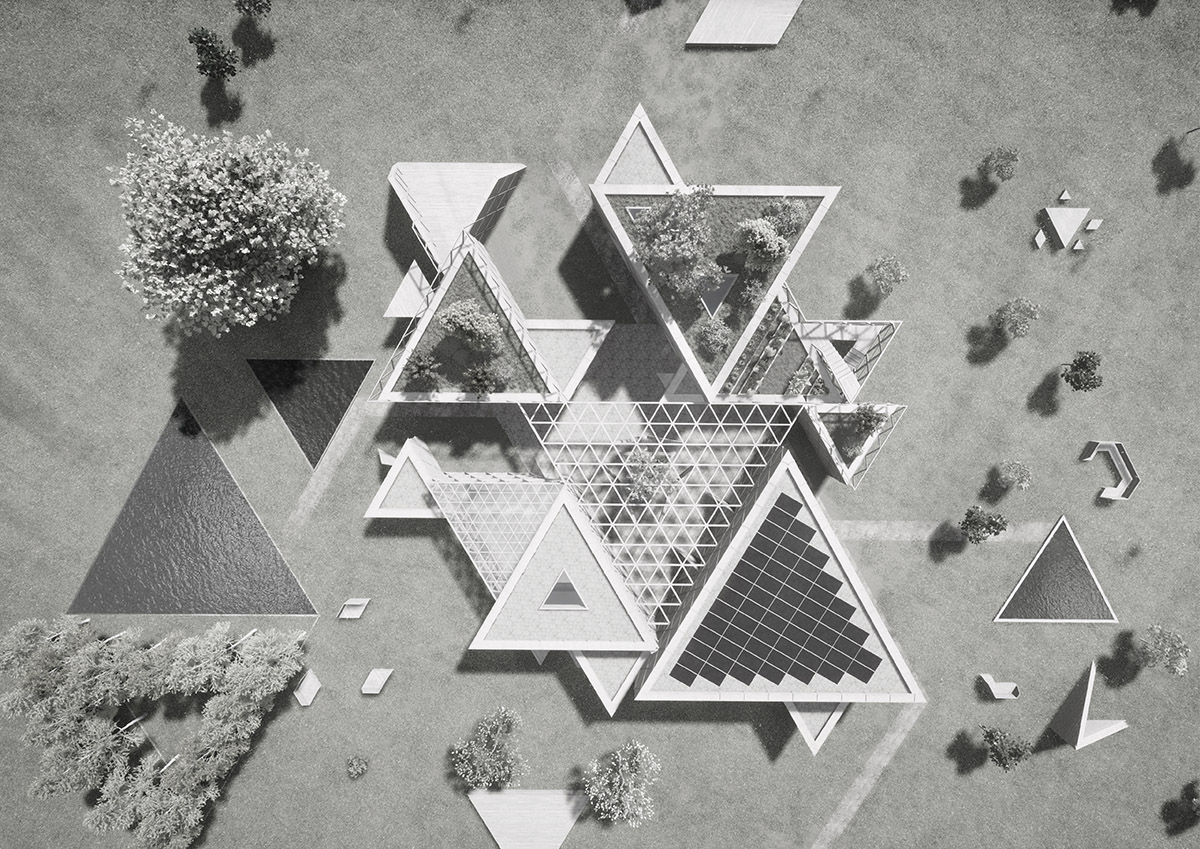 When defining the functional programme, noa* first investigated the needs of a cultural and community centre as well as the ways to create an architecture as inclusive as possible.

"How do you design a space that works in the same way for children who meet to play, adults to watch an exhibition, teenagers to listen to a concert?," the studio asks.

"What are the characteristics of a meeting space that is open all year round, that is not for consumption and that represents the public counterbalance to the private domestic dimension?."

"The natural answer to these questions was the decision to define different spaces capable of satisfying multiple needs, rather than specifying a fixed list of functions," the studio added. 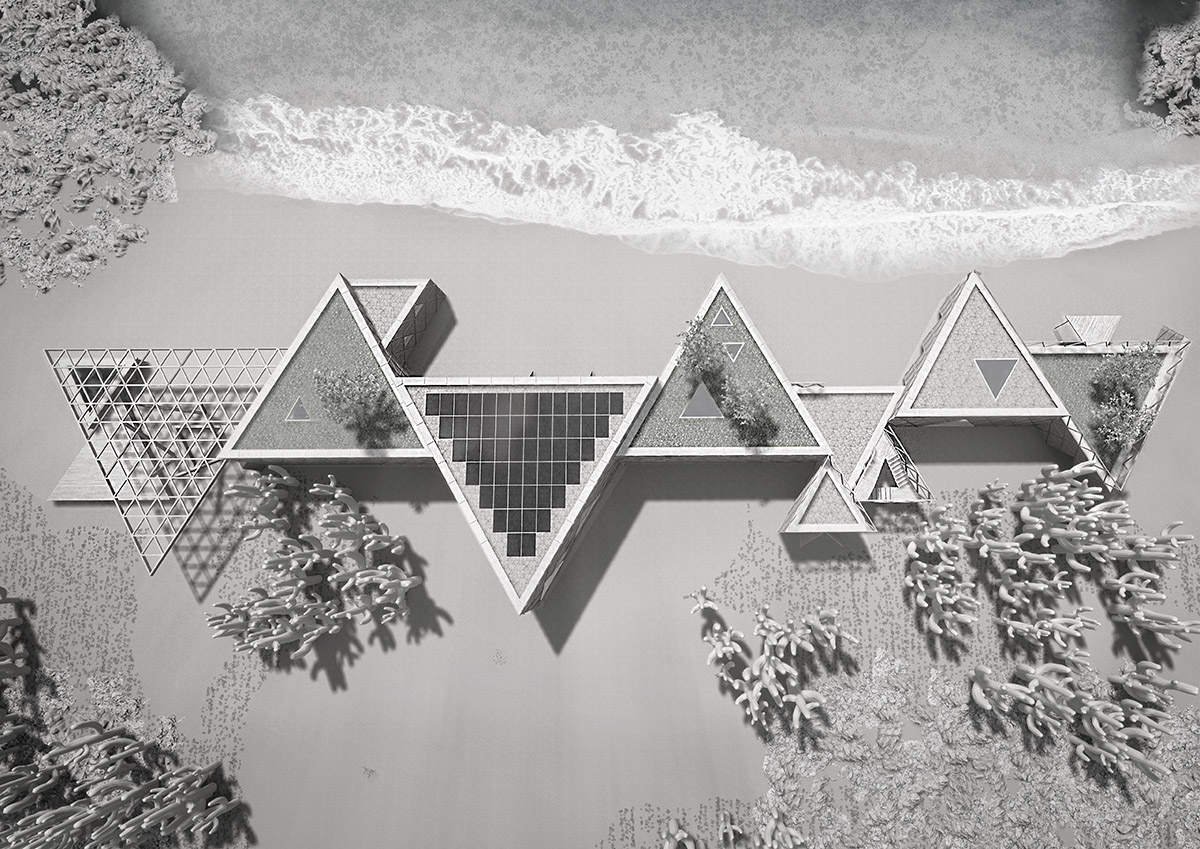 The architects create six types of floor plans, ranging from 8 to 115 square meters, all the possible activities of the centre are accommodated.

The architects place functions according to the sizes of the modules. For instance, the small module houses the artist's atelier, the newspaper stall, the storeroom, the management office, the staircase, and the changing rooms. In the extra small module, a ticket office is proposed. 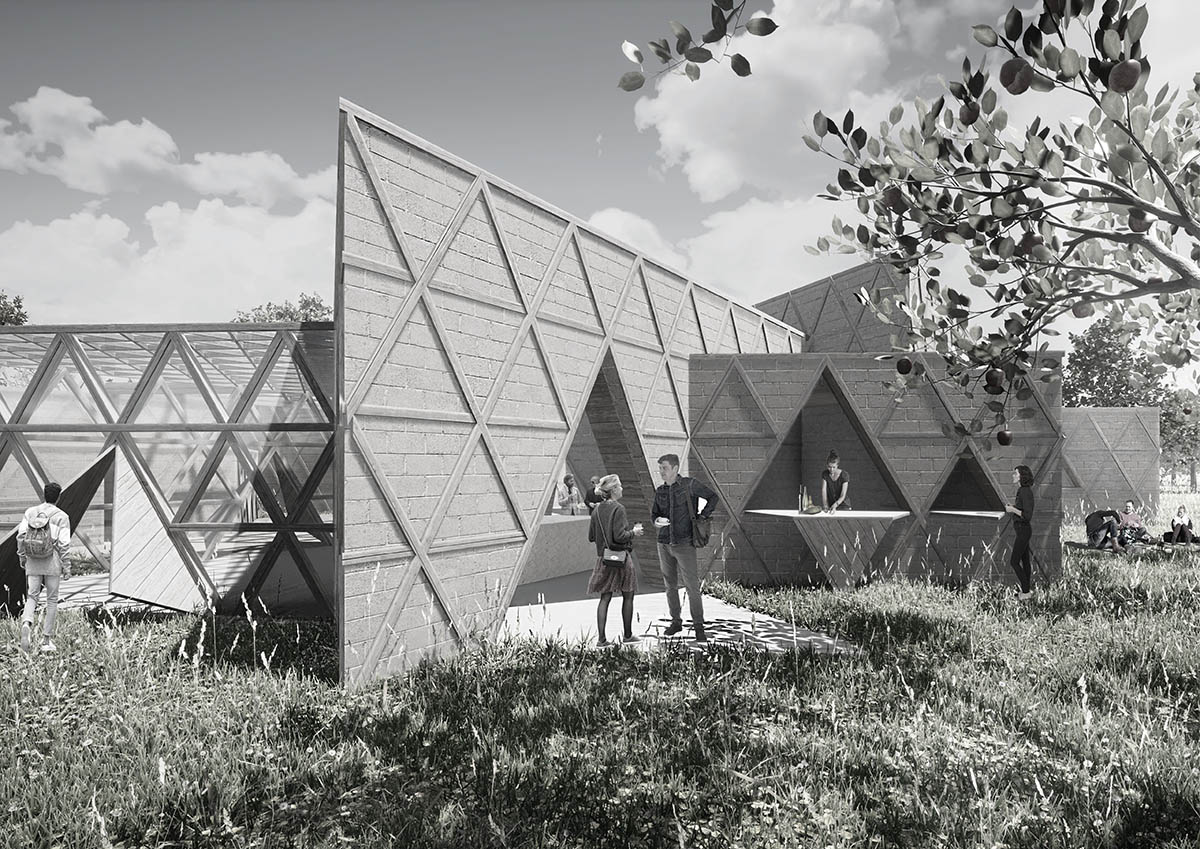 In the medium module, there are the toilets, a library room, and the open-air bleachers, since not all modules stand for covered spaces. "As the floor plans change to the larger size, the possibilities vary, culminating in the large space, with 115 m2 available, designed for theatre and cinema," the firm adds. 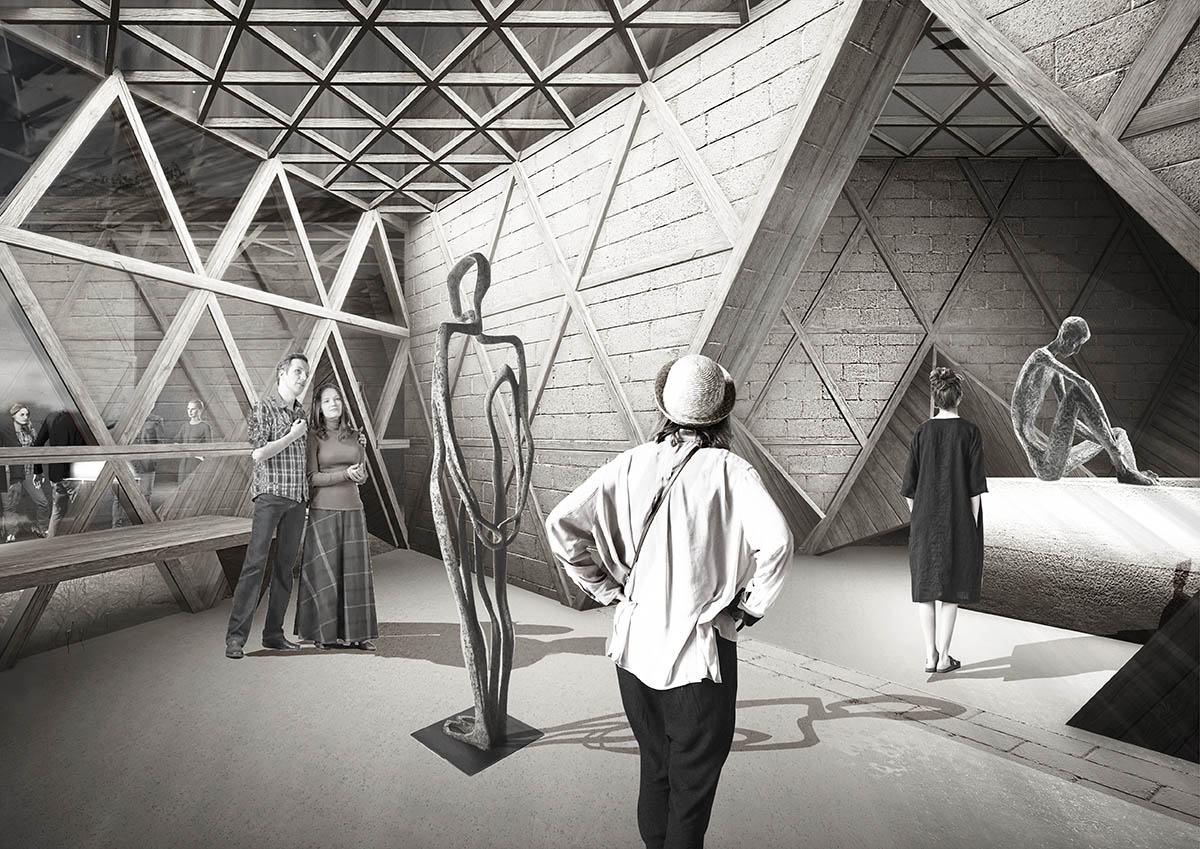 With this project, noa* aims to propose an architecture "that is social in its final purpose, and sustainable in all the aspects of the design, including the choice of materials and construction techniques."

For this prototype all natural materials and an exposed construction system are chosen to be able to easy to assemble and dismantle.

"In the “standard package”, the façade is made up of an exposed wooden structural system and a wall of clay bricks, alternating with transparent parts, which have also been modulated on the geometry of the triangle," the studio continues. 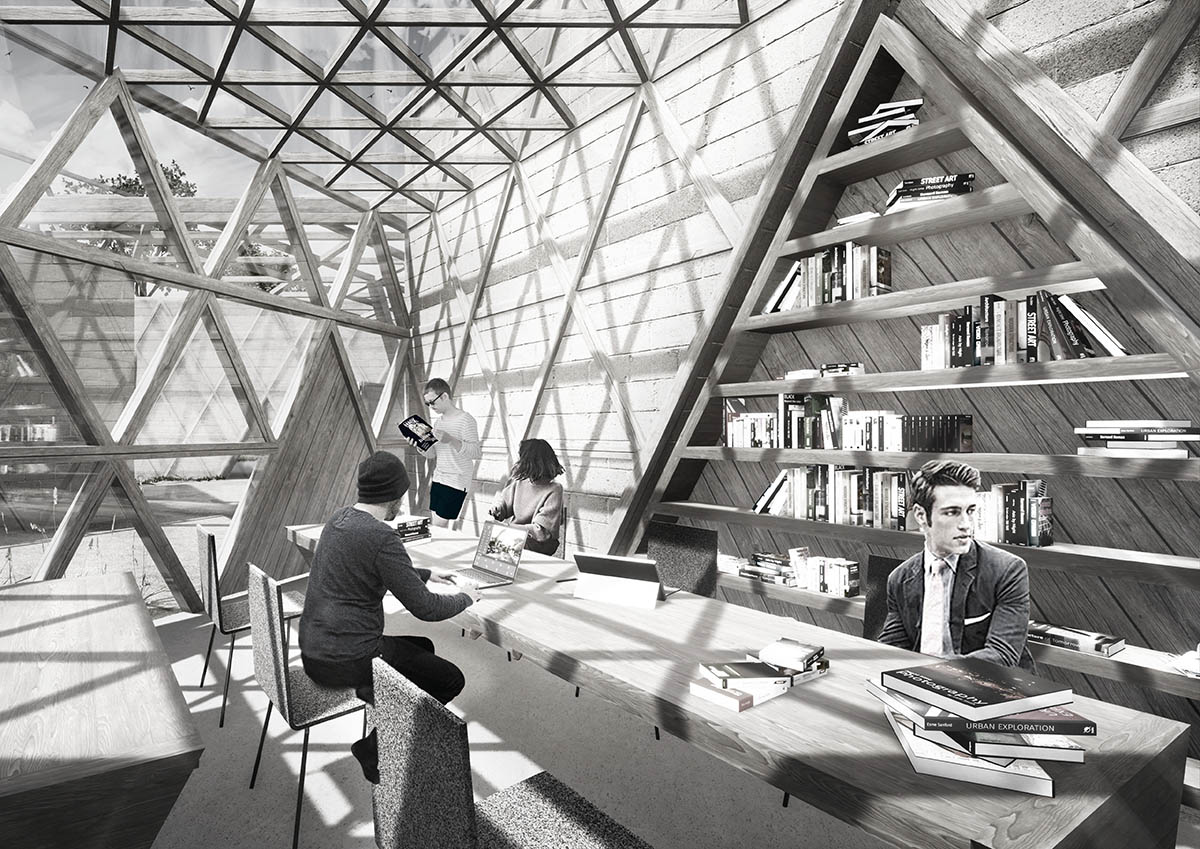 "The sustainable approach must be central in the design: therefore, the final choice of materials must be verified with the project environment, to check their actual availability on-site, their thermal conductivity in relation to the climatic conditions, the energy consumption in their processing and the presence of the necessary know-how skills."

As the studio emphasizes, similarly, a careful design of the installations can contribute to a positive environmental impact on the ecological footprint of the building. 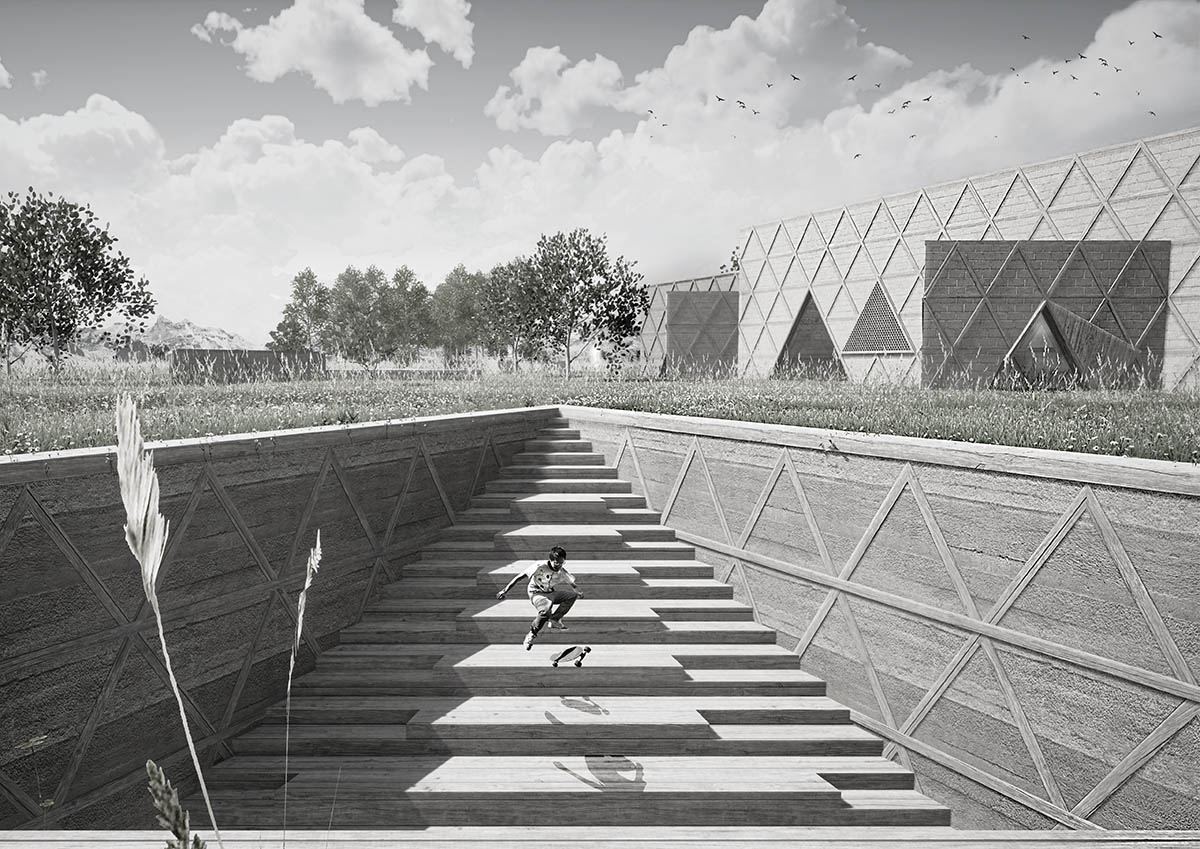 The cultural centre includes the use of green roofs and pergolas, photovoltaic systems, rainwater collecting systems, cross-ventilation systems as well as ponds and wooded areas for a temperate microclimate.

With this project, noa* envisages a flexible architecture, capable of reacting to changes in context and at the same time of working on different scales, from the macro-project to the street furniture. 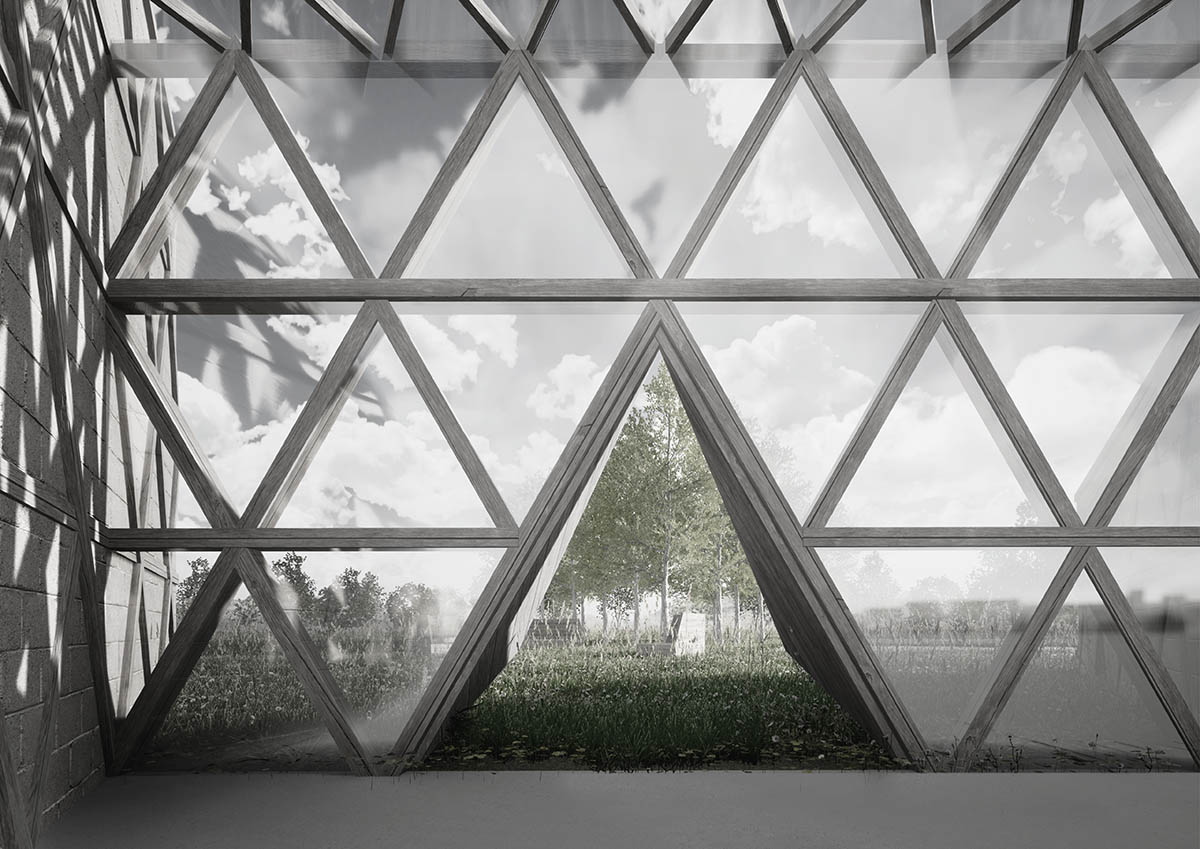 The architects state that "this cultural centre could be located on a beach on a volcanic island, in the Scandinavian forests, on an abandoned lot in Detroit or on the roofs of socialist housing in Berlin."

It is an architecture able to mould itself to the morphological and climatic requirements of the context while maintaining intact the concept of sociality and interaction between the building and those who live in it. 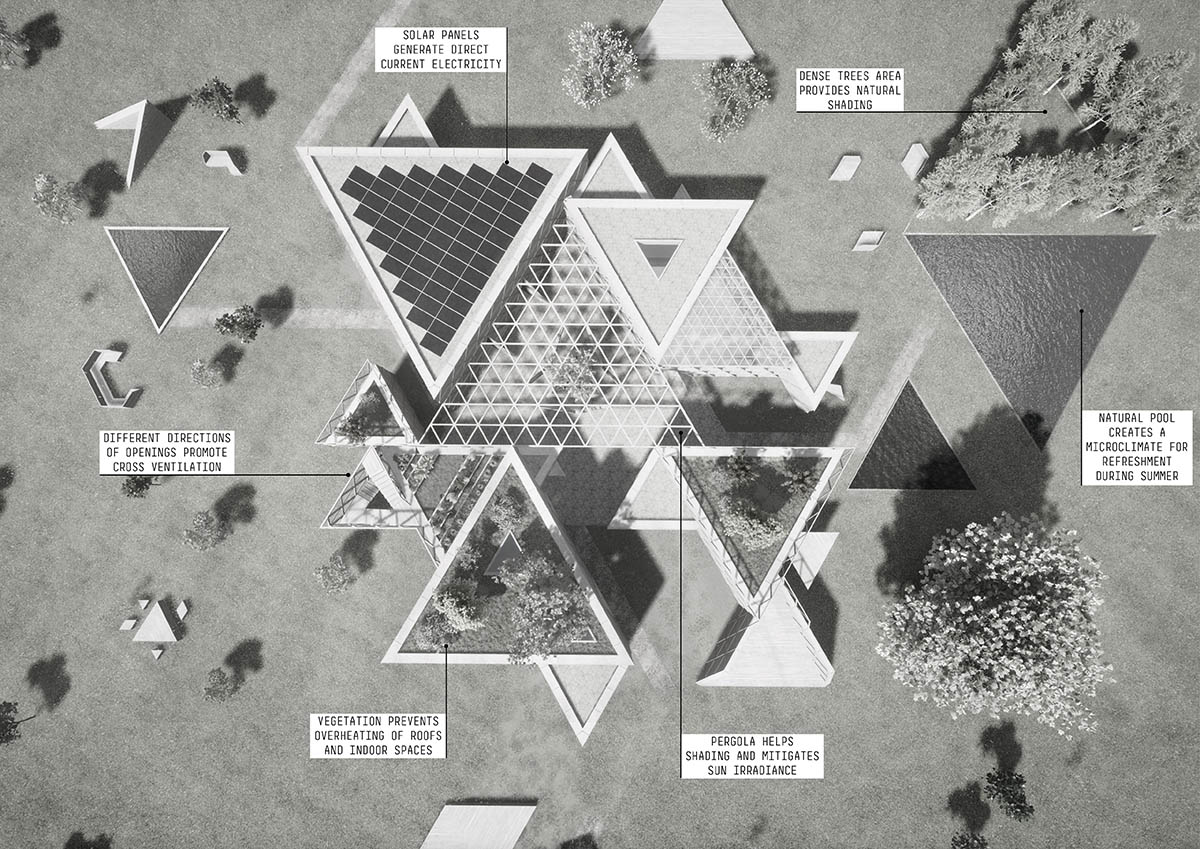 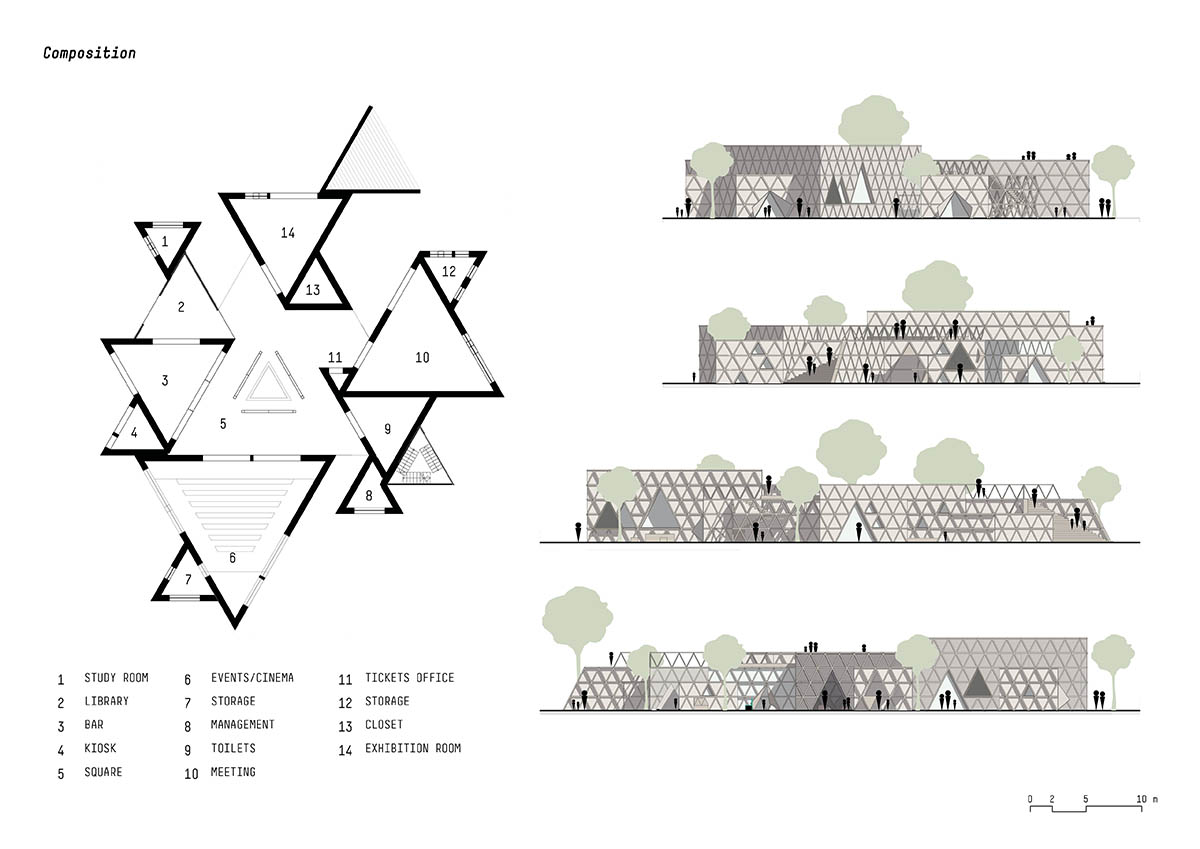 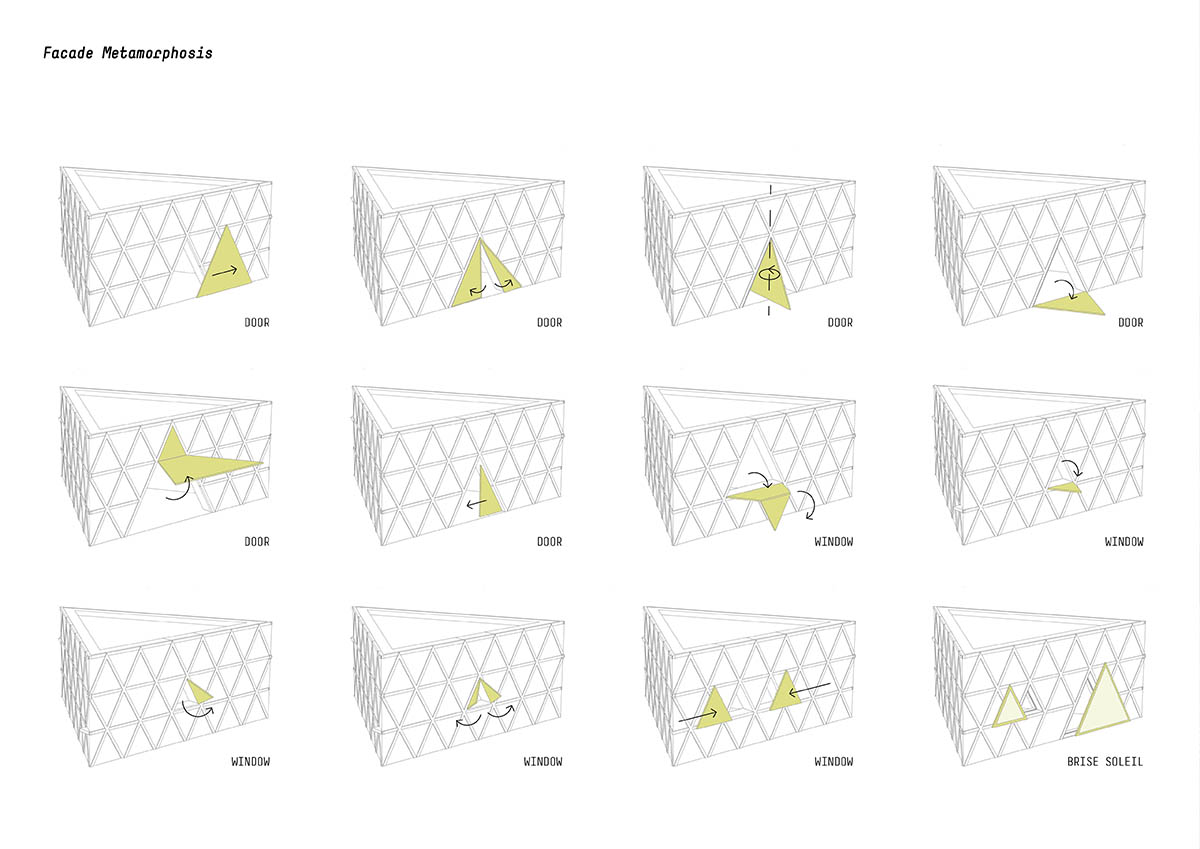 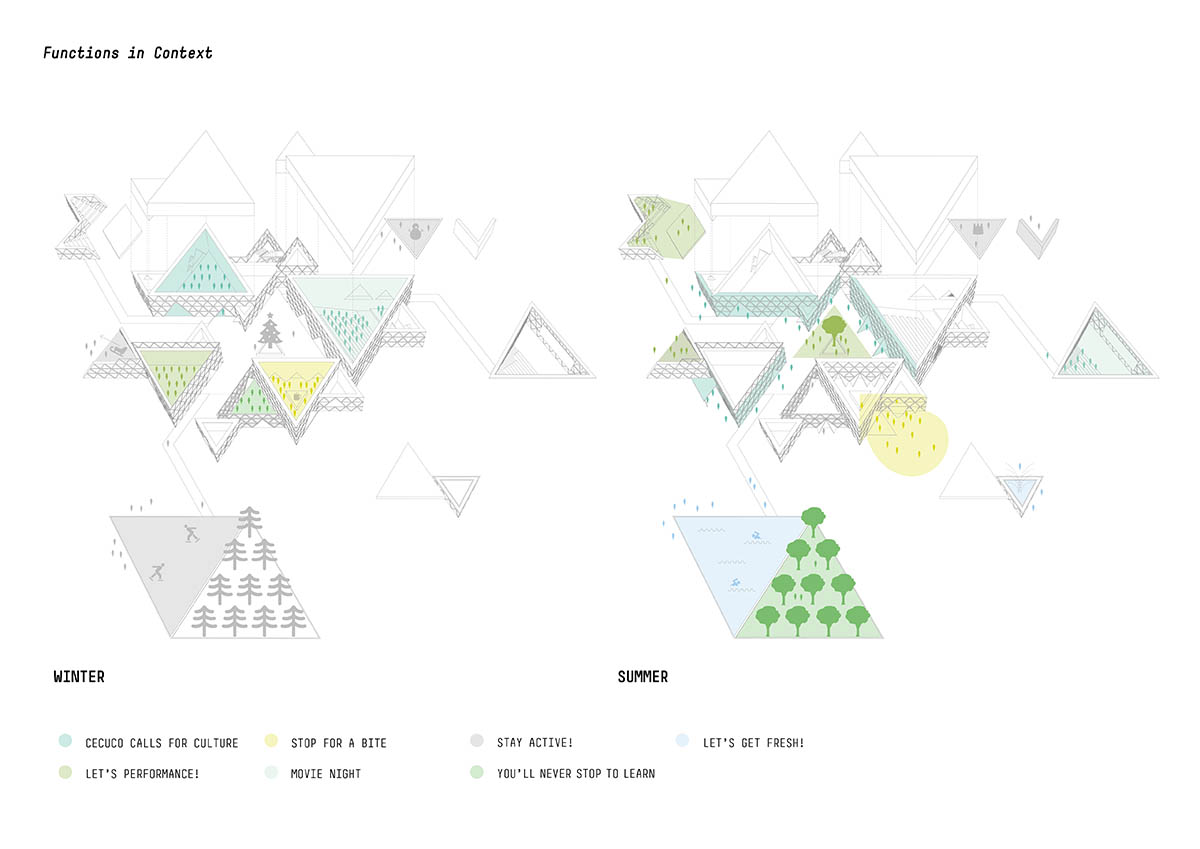 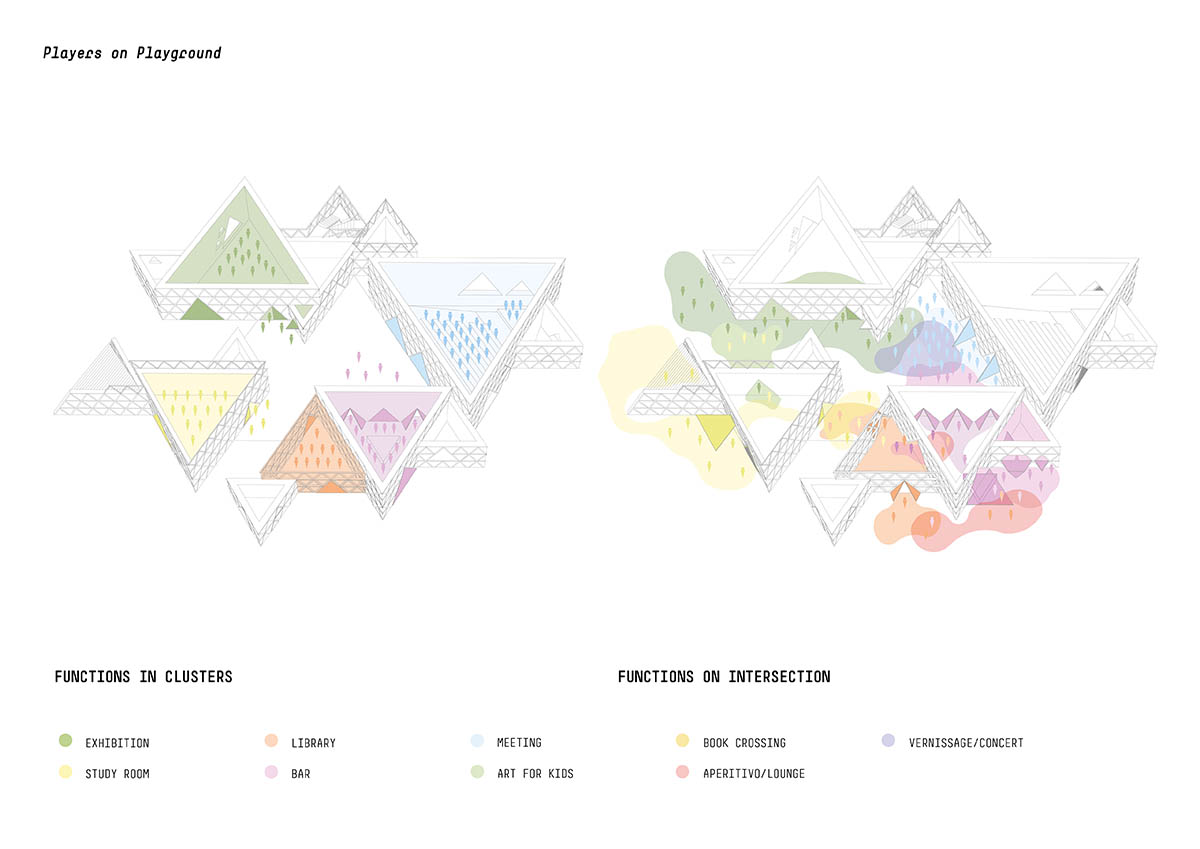 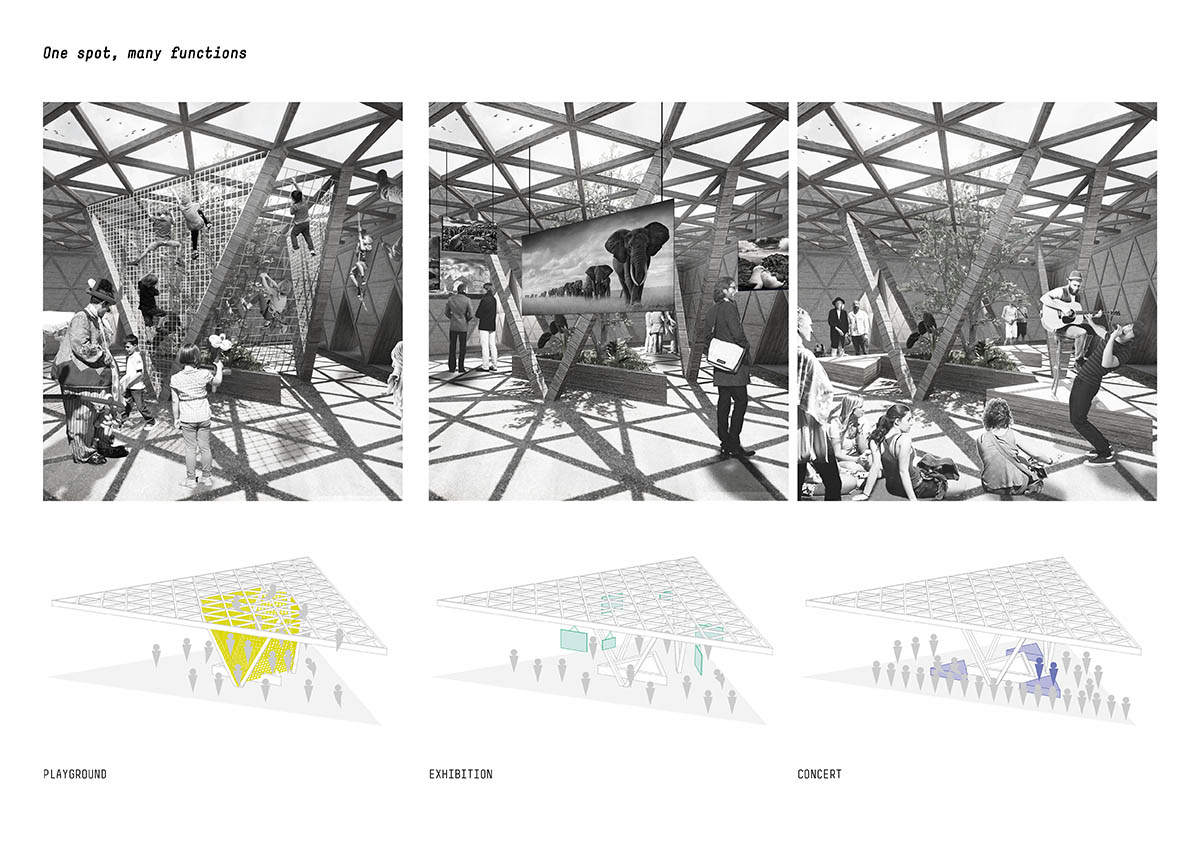 One spot many functions 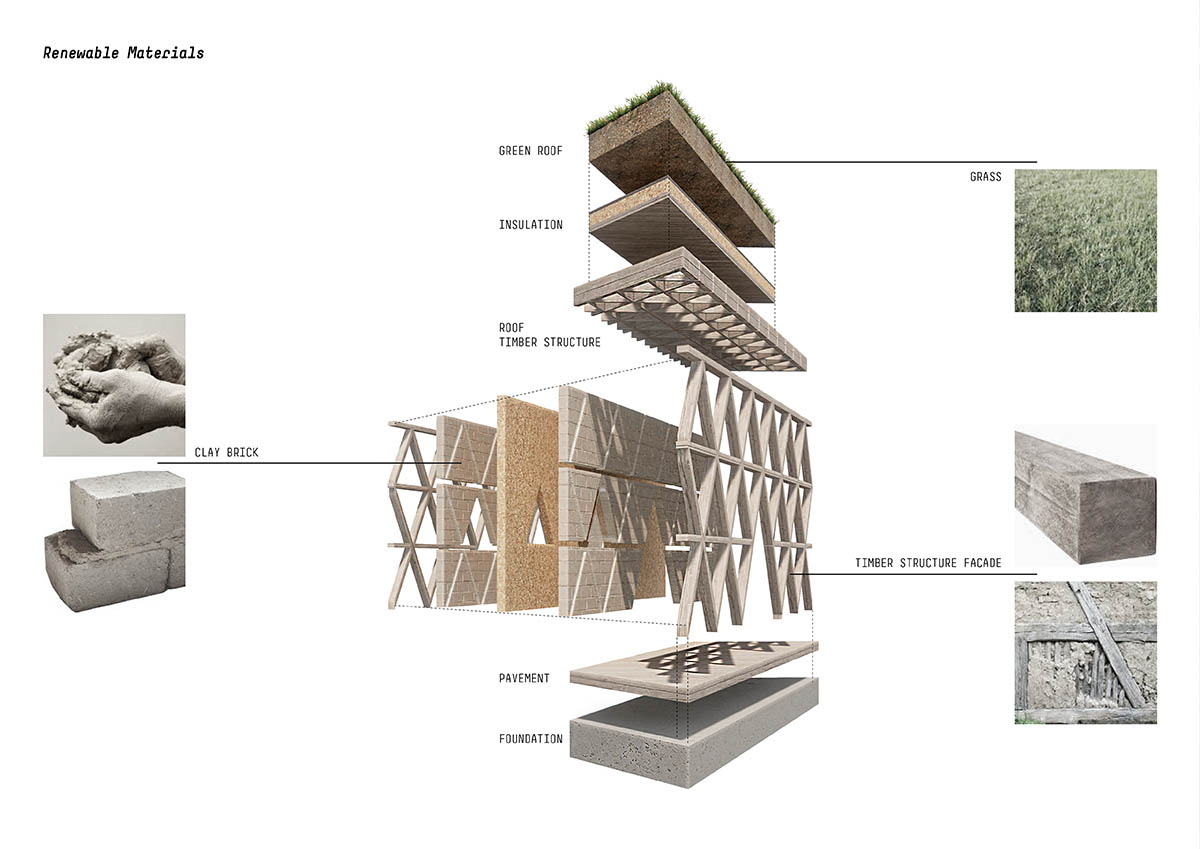 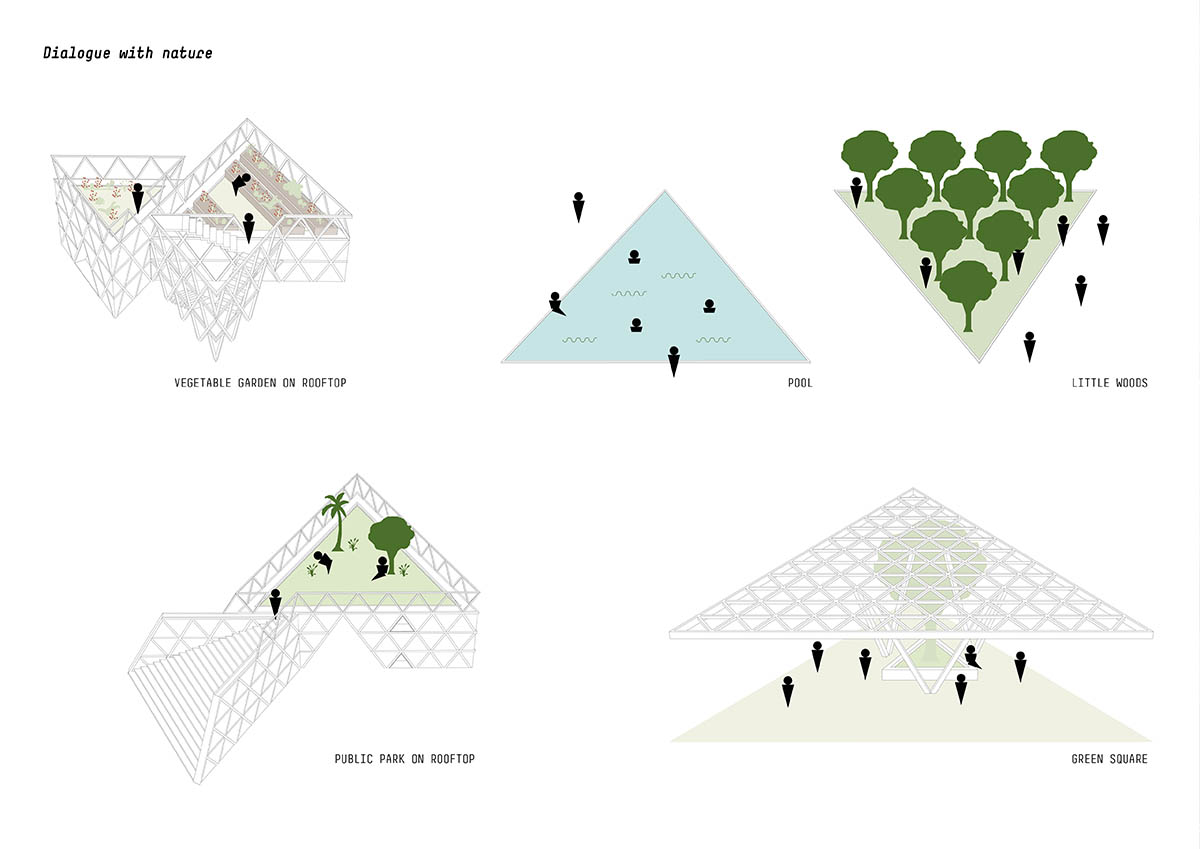 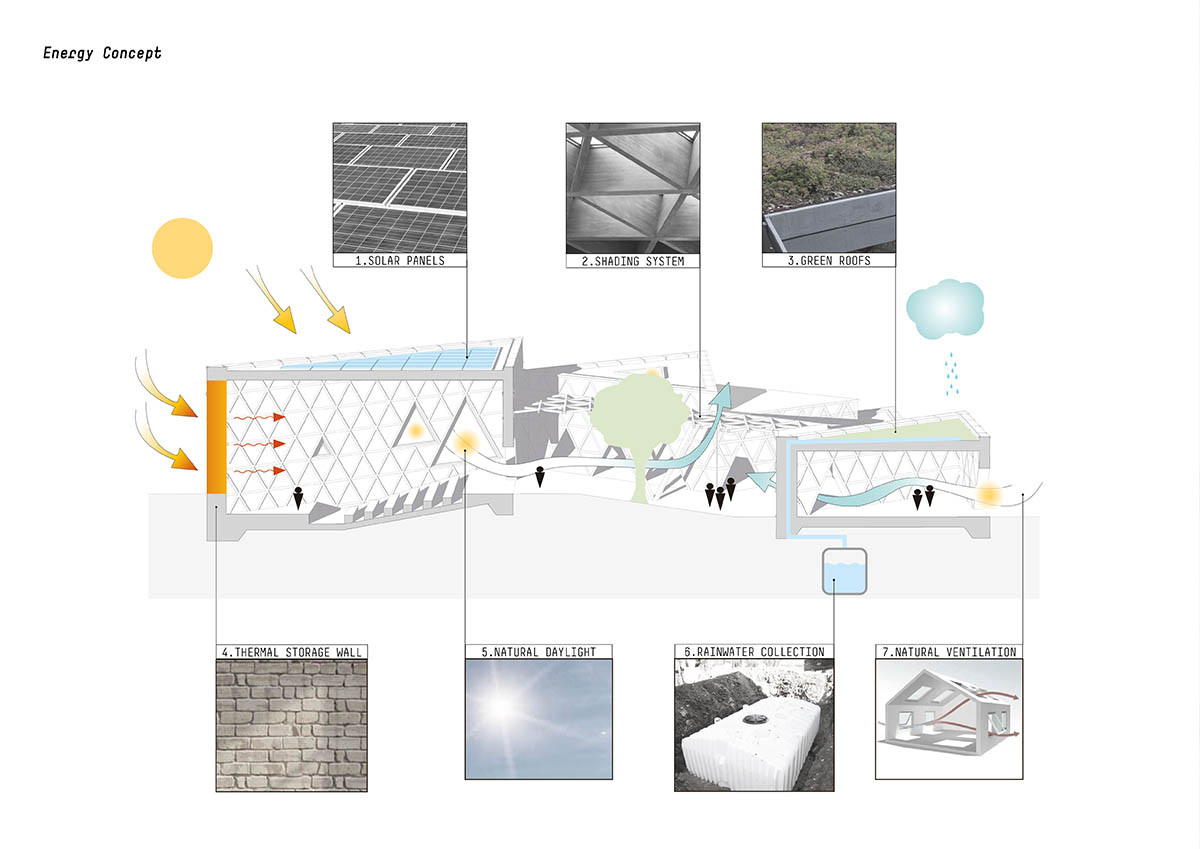 noa* previously completed a boutique hotel and wellness in a 550-year-old farm in Soprabolzano, South Tyrol. The studio transformed old monastery into a hotel inspired by region's rural constructions in Arco.

All images courtesy of noa* network of architecture.