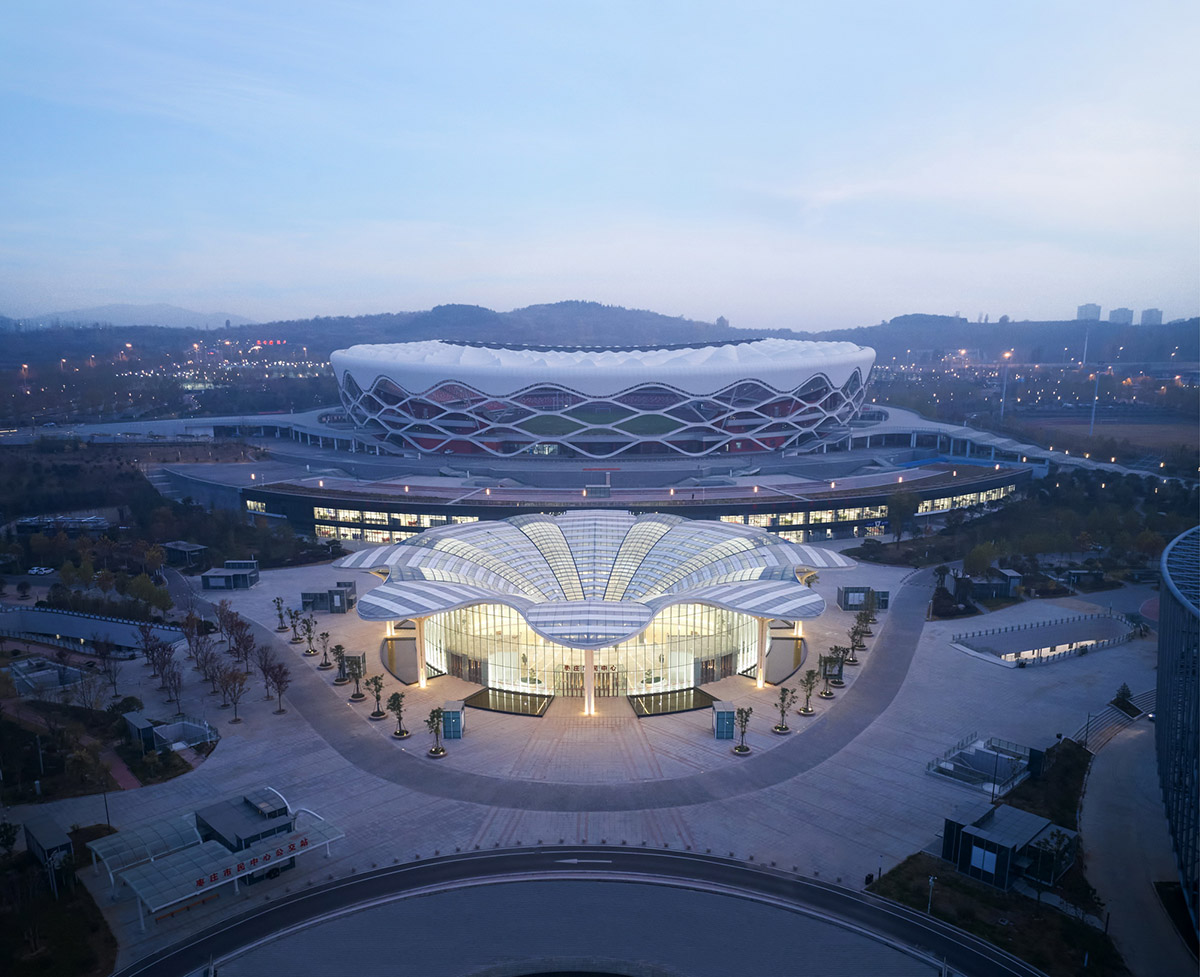 Shanghai United Design Group (UDG) has completed a service center that takes references from a pomegranate flower, the city flower of Zaozhuang in Shandong, China.

The project, called Zaozhuang Citizen Service Center, was developed as part of the Civic Center complex in Zaozhuang City.

Situated at the middle of the plot, the new service center is surrounded by several built buildings, including a stadium on the south, a gymnasium and a natatorium on the northeast, and a cultural center on the northwest side. 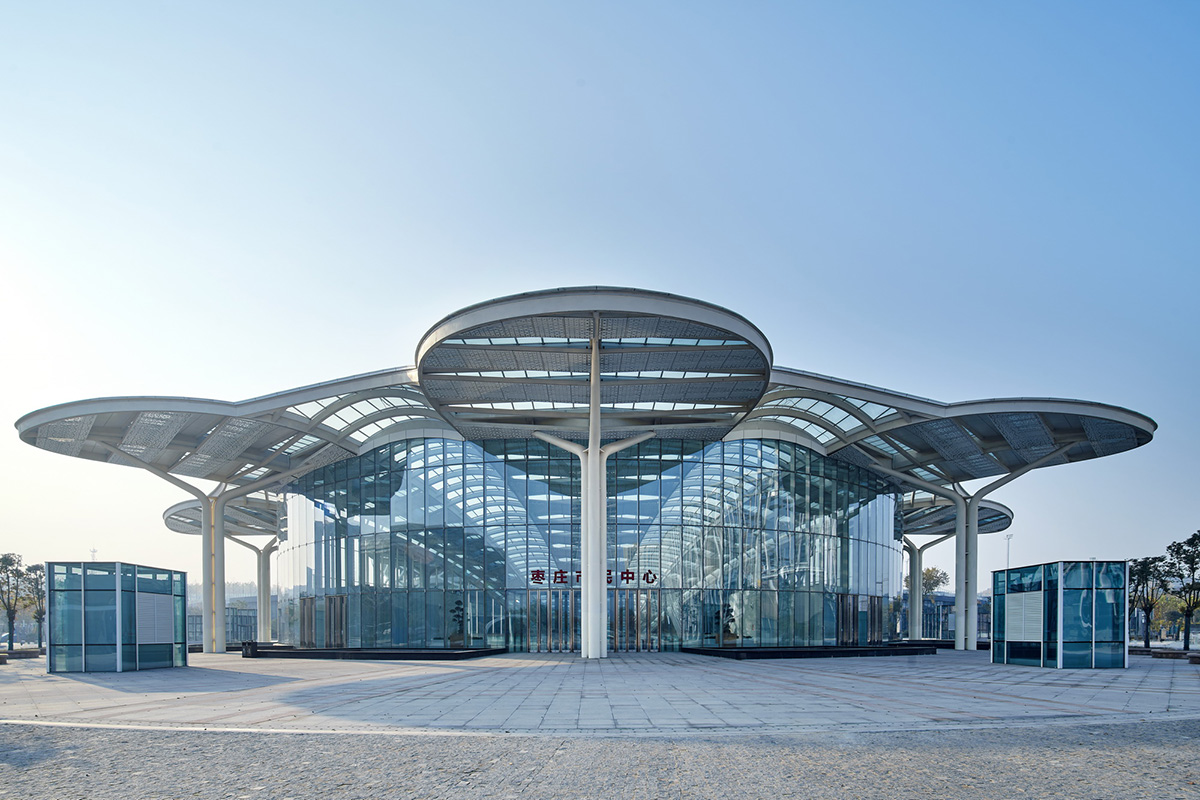 The circular building acts like a blooming pomegranate flower since its roof is formed by eight pomegranate petal-like units, which are connected by curved glass.

The project breaks away from the rigid image of conventional civic buildings. By blending the building into nature, and art into life, the architects created a public cultural landmark that is graceful, romantic, unique, and exclusive to local citizens. 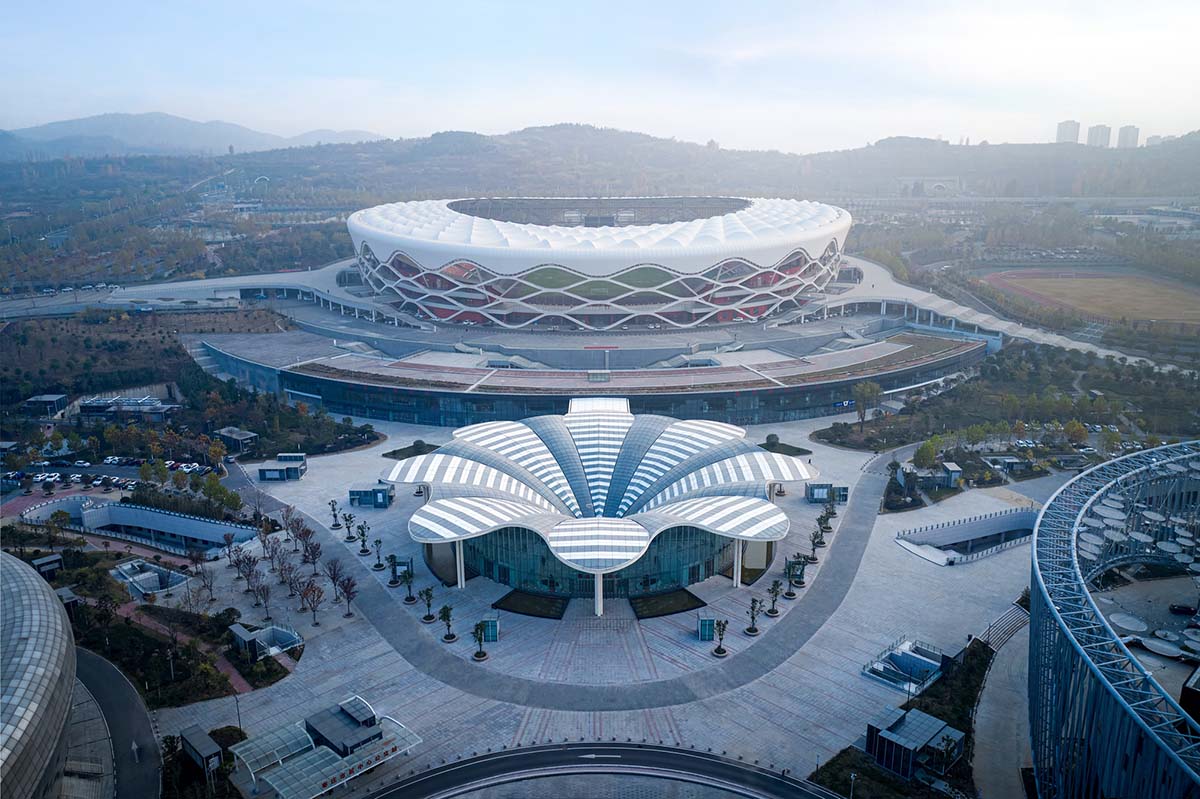 The design team responded to the spiritual requirements on the site and architecture by combining the abstract and the concrete. Based on the reflection on various aspects including city, nature and humanity, they took the integration of nature and culture as the starting point for the design.

Under lightweight and elegant petal-like roof structures, the architectural space is enclosed by transparent and soothing curves, offering an open view to the sky and the surrounding landscapes. The strip-like ribs and the veined rooftop are appealing and expressive.

The sunlight falling down produces mottled shadows. With the play of light and shadows, the illusionary "flower" and "leaves" are intriguing. In this place, people can experience the change of time and space, the rhythm of nature, and express themselves in a poetic way. 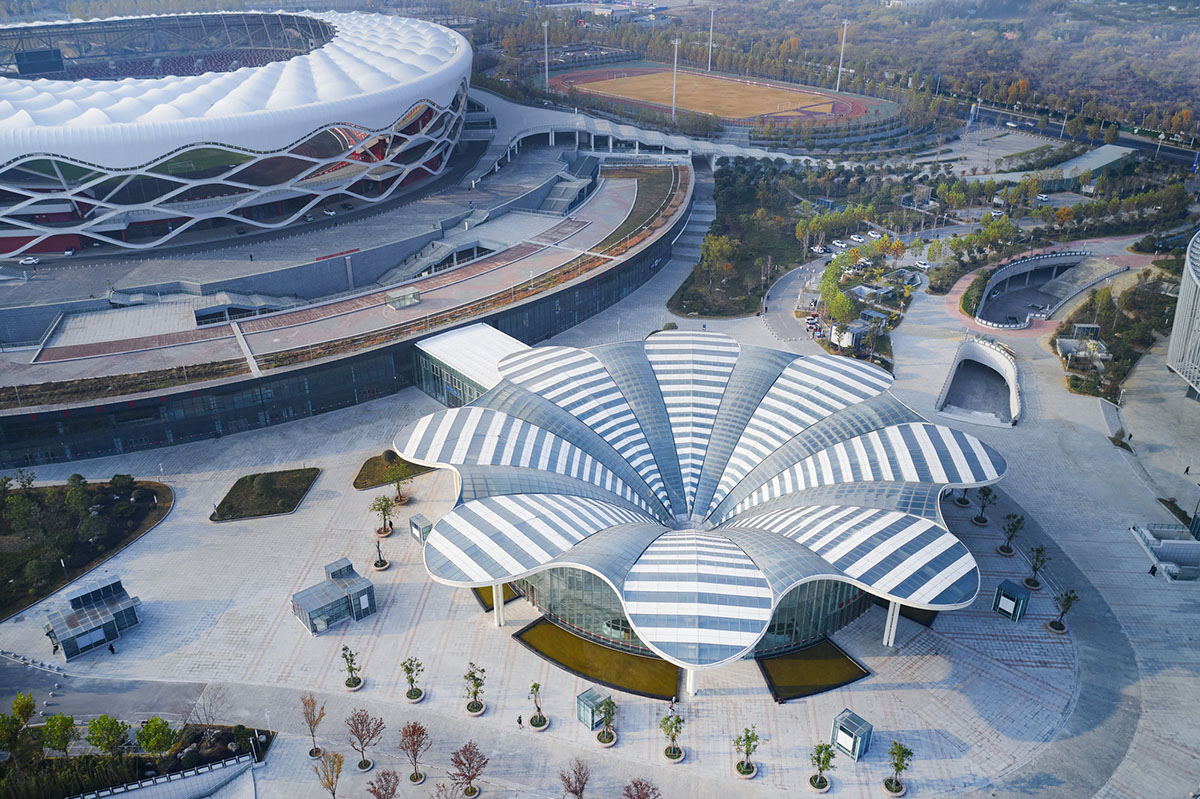 This Civic Service Center is a newly built project of the Civic Center complex. It functions as a window for public affairs, and mainly serves as a platform of administrative examination and approval, for the convenience and benefits of the citizens. This citizen service building was repurposed from parts of the original commercial space of the Civic Center, through a process of reconstruction and extension.

The entrance hall is a new addition, which acts as the gateway of the Citizen Service Center and connects the above-ground and underground parts of the building. 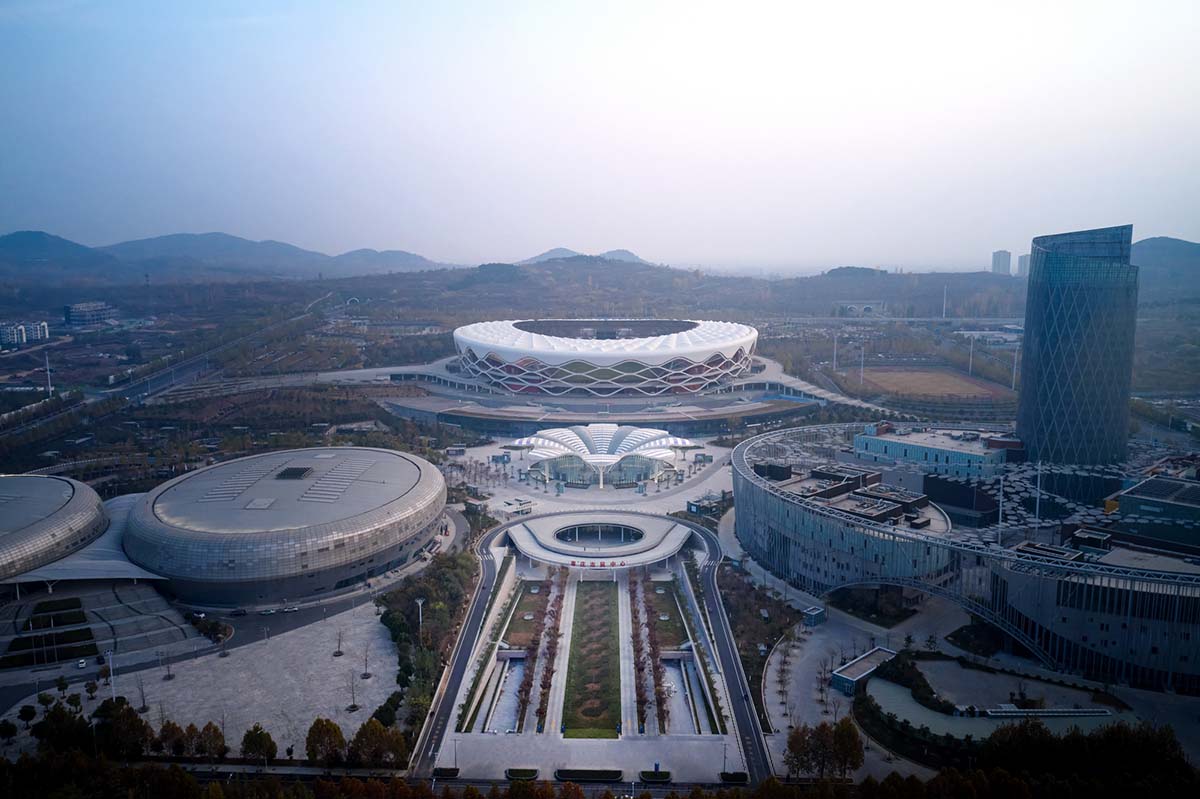 This ground-level hall is a space frequently used by citizens, and also the dominant center of the whole Civic Center complex.

According to the architects, the unique pomegranate flower-like form generates an iconic image for the building. The open hall can also be used for cultural events such as public exhibitions and gatherings. The whole space is bright and clean with abundant light and shadow effects, shaping a highly appealing and charming urban public space. 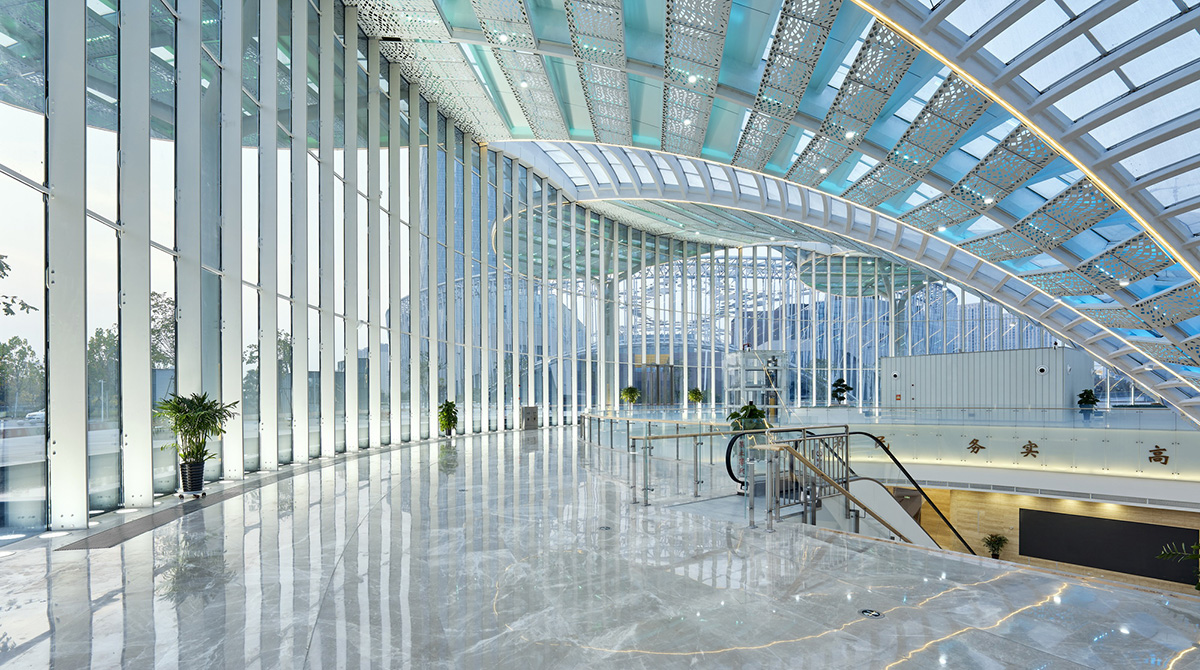 Based on the master planning of the overall Civic Center complex, people can access the Citizen Service Center from various directions, so its entrance hall needs to be open and friendly to citizens from all around. In light of this, its architectural design adopted a symmetric layout to harmonize with the master plan of the Civic Center and echo the coherent central axis.

Within the Civic Center complex, landscaped squares are set between the buildings on the north and south side, and many sunken squares are connected with the B1 floor. The B1 floor of the landscaped platform are divided into Zone A, B, and C, among which Zone B and C are mainly repurposed for government affairs office and supporting commercial operations, while Zone C is transformed into the Citizen Service Center. On the south side of the landscaped platform, there is an existing two-story building, which neighbors the stadium on the north. This building was formerly used for commercial activities, and now is turned into the Citizen Service Center. 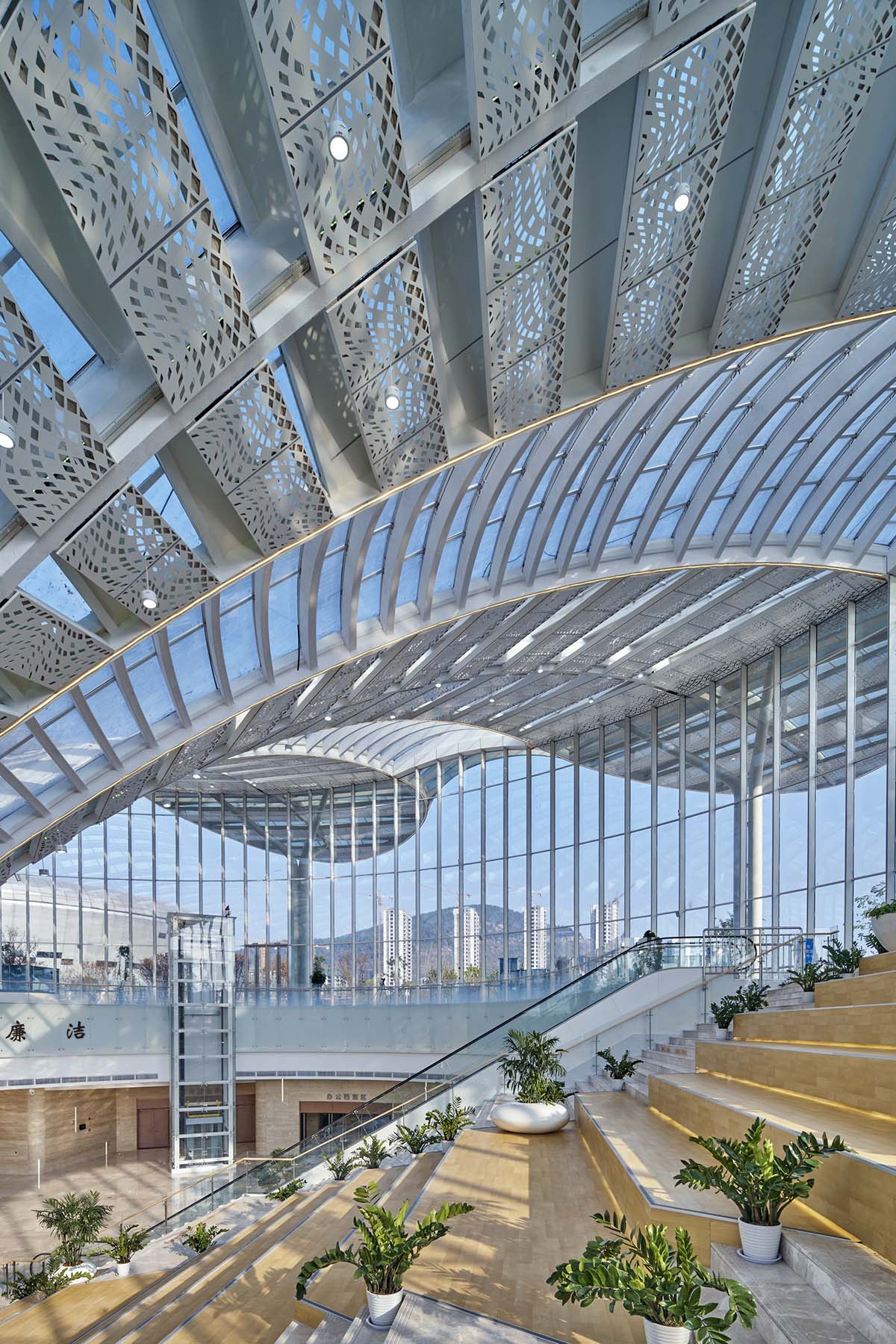 The location of the newly-added main building body is of paramount importance. The design team made use of the sunken square of Zone C on the central axis and created a new architectural space above it, to shape the iconic entrance hall of the Citizen Service Center and to let Zone C connect the ground level through the sunken square.

The entrance hall and the two-story aboveground building are connected by a corridor, which integrates the underground area and the ground-floor space into a whole. 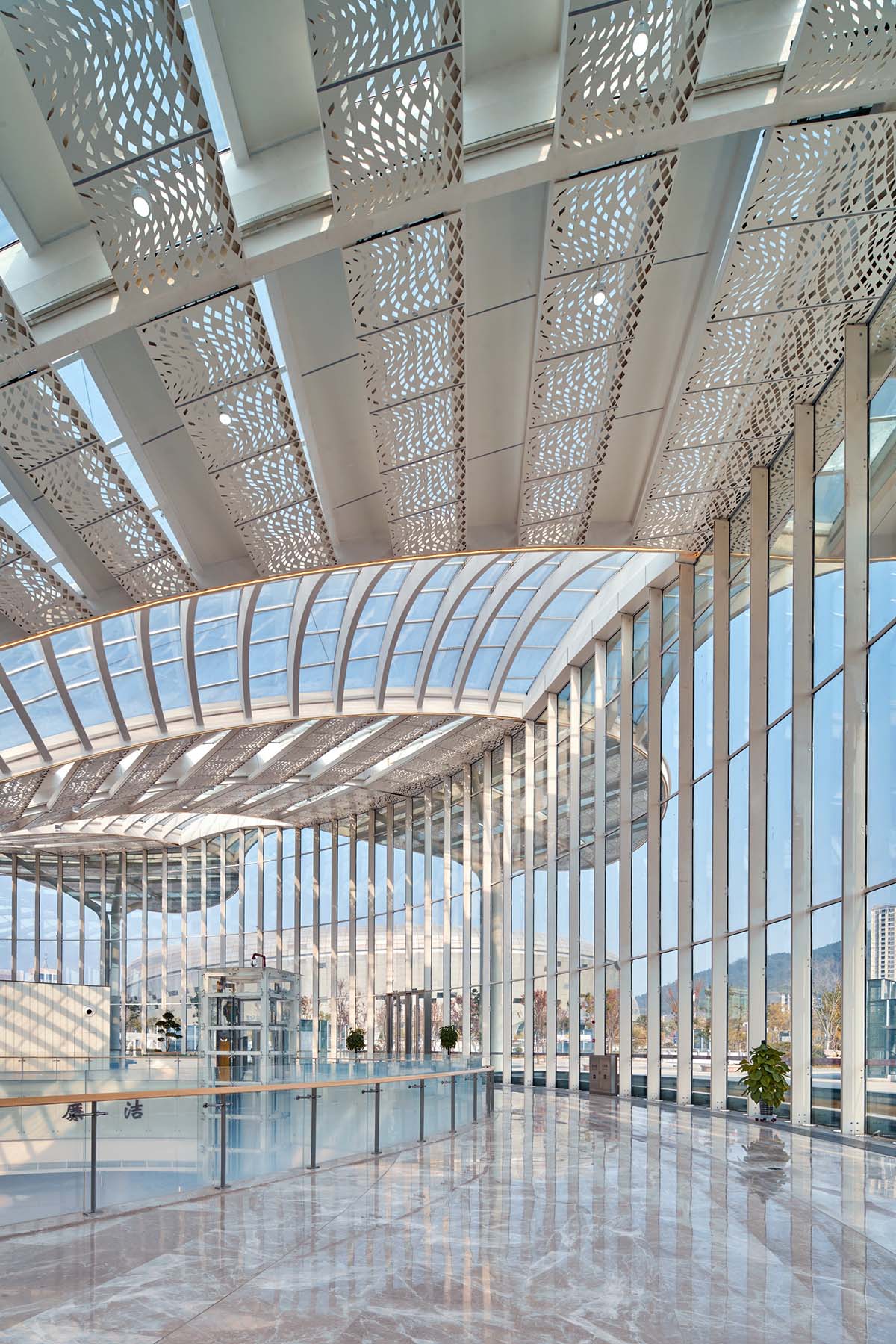 The Civic Center complex is the largest government-funded public construction project in Zaozhuang, as well as one of the landmarks of the city.

Since the Citizen Service Center is a window of showing the city's identity, and its functional attribute determines that its image need to reveal a strong spiritual and cultural appeal. Considering this, the architects intended to draw inspiration from local characteristics to conceive the architectural form. 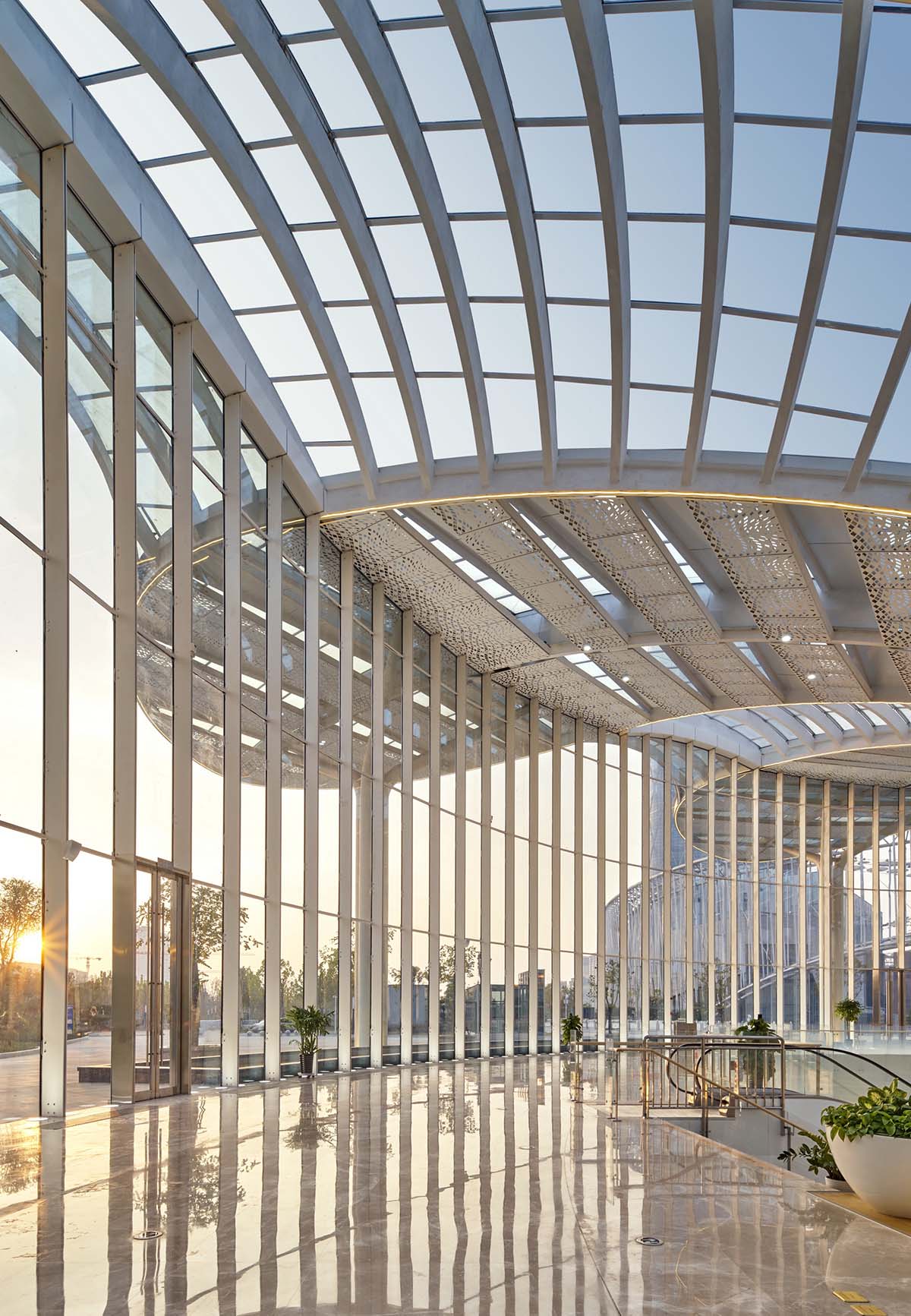 With the Grand Canal running through the city, Zaozhuang is noted for its water-town features. As the main producing area of pomegranates in China, it is home to a 100,000 mu pomegranate orchard that gains Guinness World Records. In addition, the city takes pomegranate blossom as its symbol flower.

The master planning of the Civic Center complex is inspired by the stones in the Grand Canal. The architectural form design of the stadium refers to the flowing water of the Grand Canal and the elements of traditional Chinese red lanterns. The Cultural Center draws on elements of pomegranate flower, and takes clustered pomegranate seeds and radial stones as the source of inspiration for layout design. 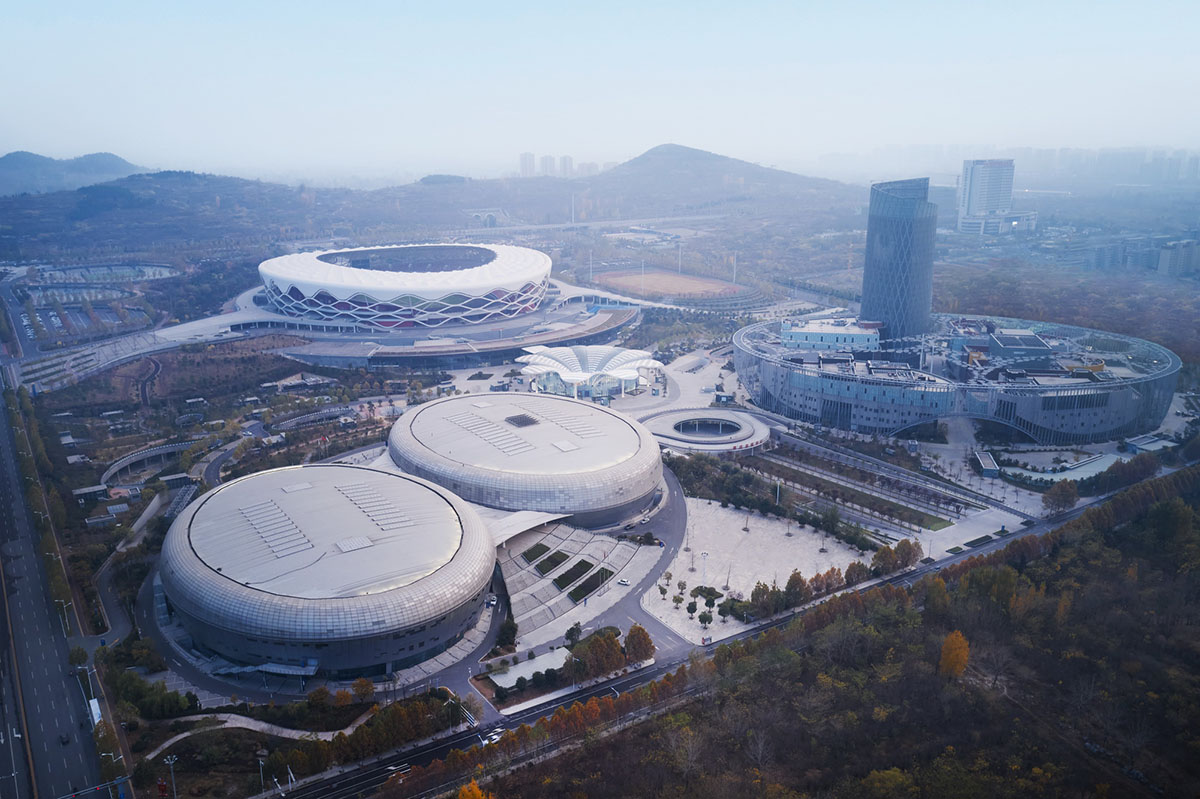 The design of the entrance hall of the Citizen Service Center continues the concept of pomegranate flowers and the abstract connotation of flowing water of the Grand Canal.

The facade of the entrance hall is formed by glass curtain walls with concealed frames. With reference to the curtain wall design of the Grand Theatre of Zaozhuang Cultural Center, it uses vertical steel ribs as the main supporting structures for the curtain wall. Those vertical ribs are combined with cables to form a point-fixing glazing curtain wall. The transparency of the glass wall enables people who are standing outside the building to perceive the pomegranate-flower image from all directions. 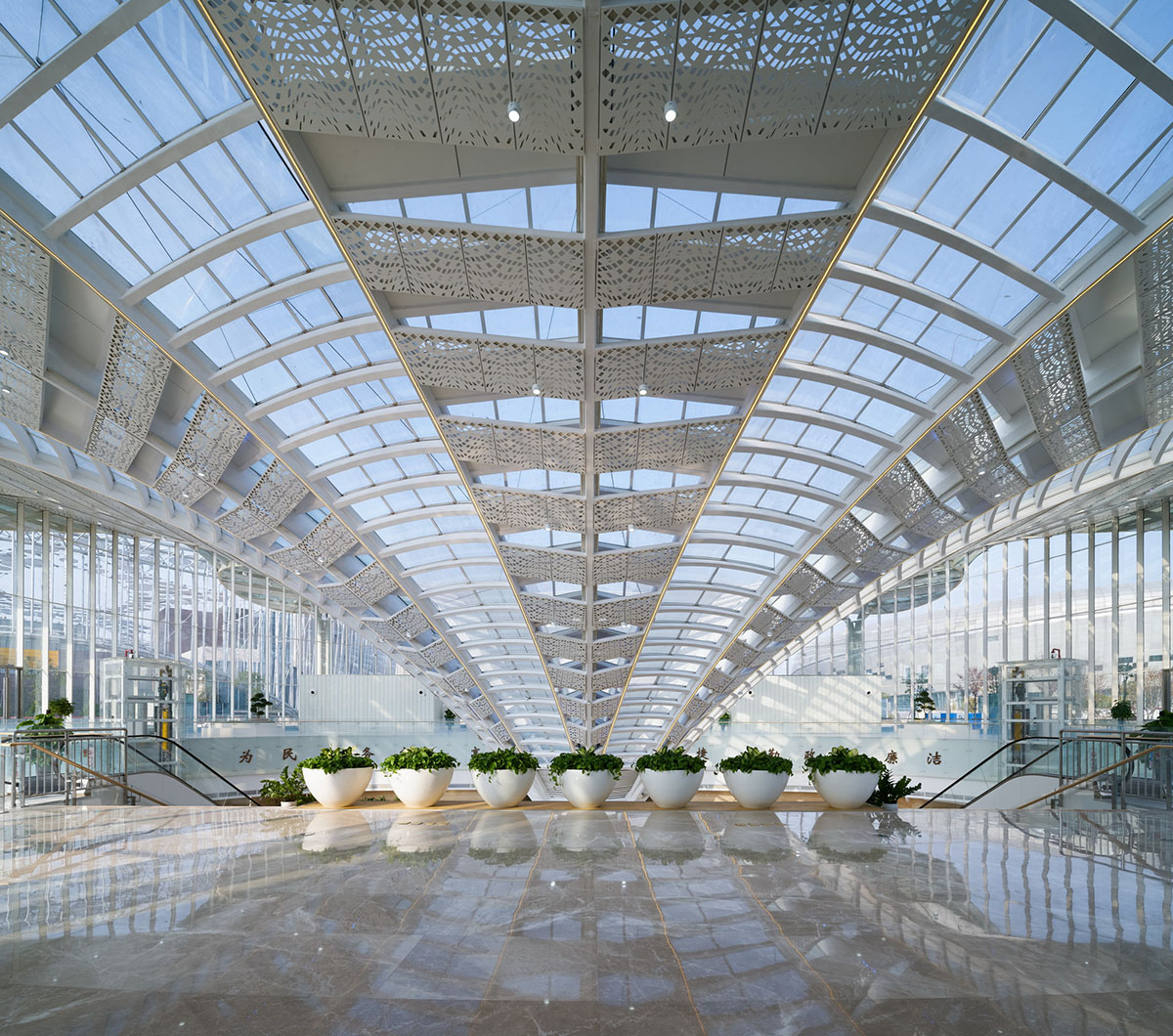 The architects conceived spindle-shaped units to express flower petals. The basic structure of each unit is mainly composed of the primary central girder and secondary beams, which form a circle around all units. The girder and secondary beams are connected by purlins. The roof is mainly composed of eight spindle-shaped units, which are distributed in a flower-like shape, connected by rods and covered with glass.

Due to the different scales of the girder and the secondary beams, a rhombus-shaped structure is naturally formed by purlins. The upper part of the structure is covered alternately with glass and aluminum plate to form the rooftop, while the lower part is composed of aluminum shutters and gaps to form the indoor ceiling. Shutters and gap spaces of the interior ceiling respectively correspond to the glass and aluminum plates of the rooftop, thereby ensuring sufficient daylighting and effective shading adaptive to the change of sunlight direction. 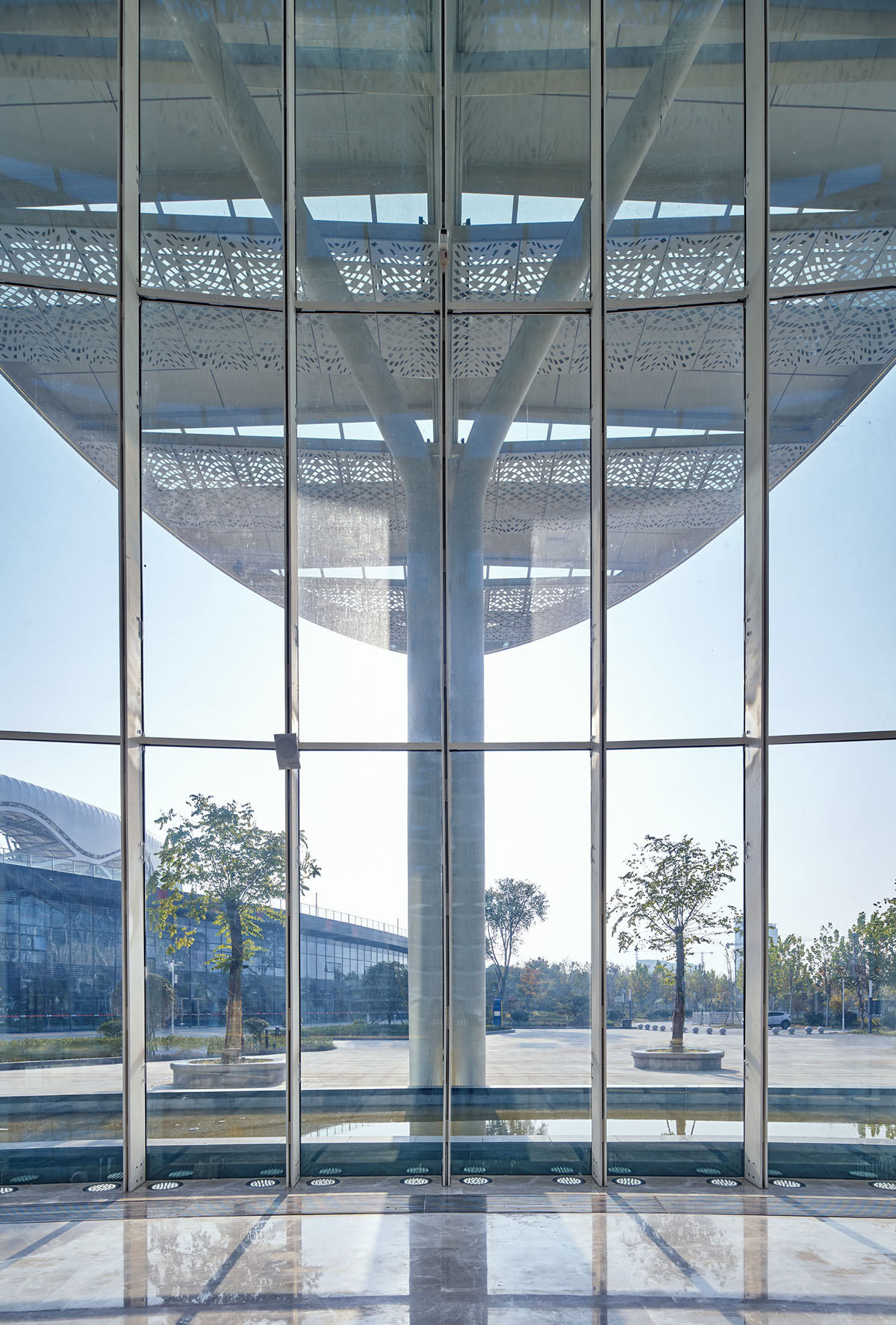 The architectural form of the Citizen Service Center guides the rainwater and snow to converge at the center of the base. Through a reasonable unit-based drainage strategy, the rainwater is collected in the drainage well in the building center and finally runs into the underground fire protection pool. Such a drainage solution eliminates the need for additional design of drainage pipes for the building facade. 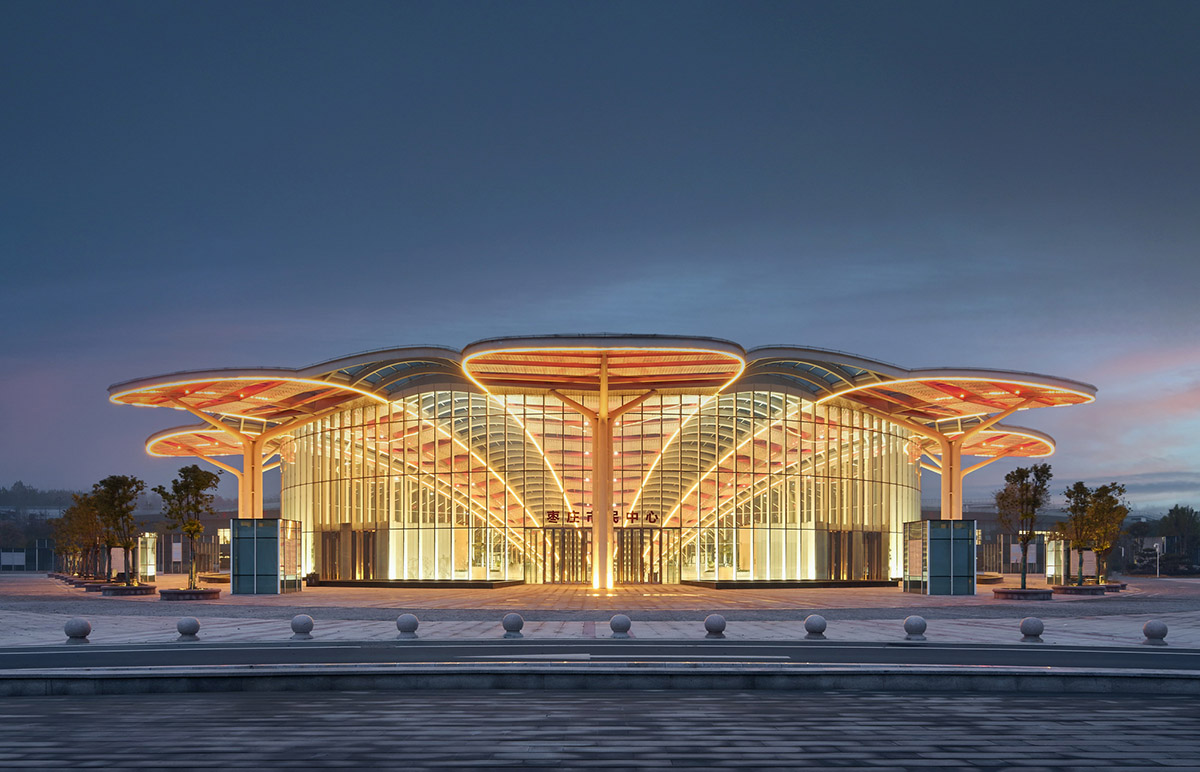 The rooftop glass and aluminum plates are installed alternately with subtle height differences, which can effectively reduce the impact when a flood of rainwater converges.

The central base of the building is deployed with an electrical heat tracing, moisturizing and anti-freezing system to effectively tackle snow accumulation in winter. 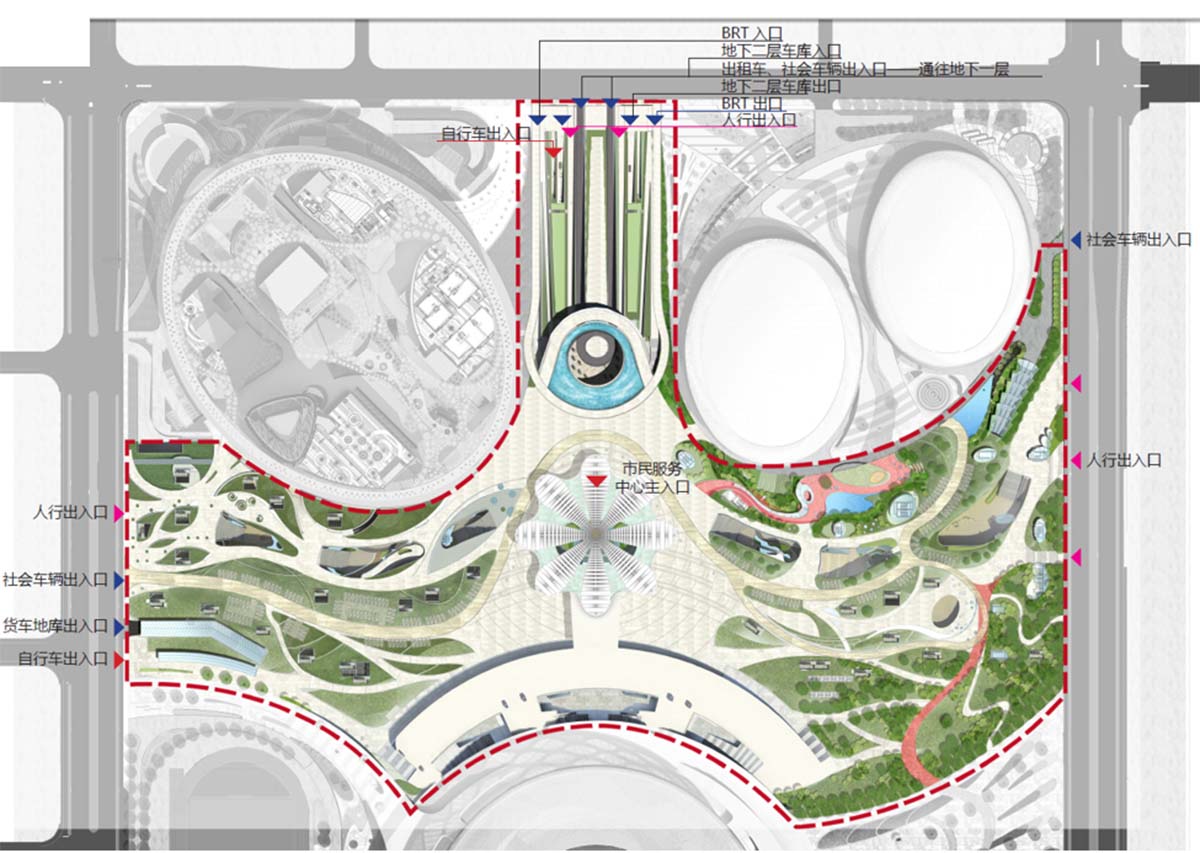 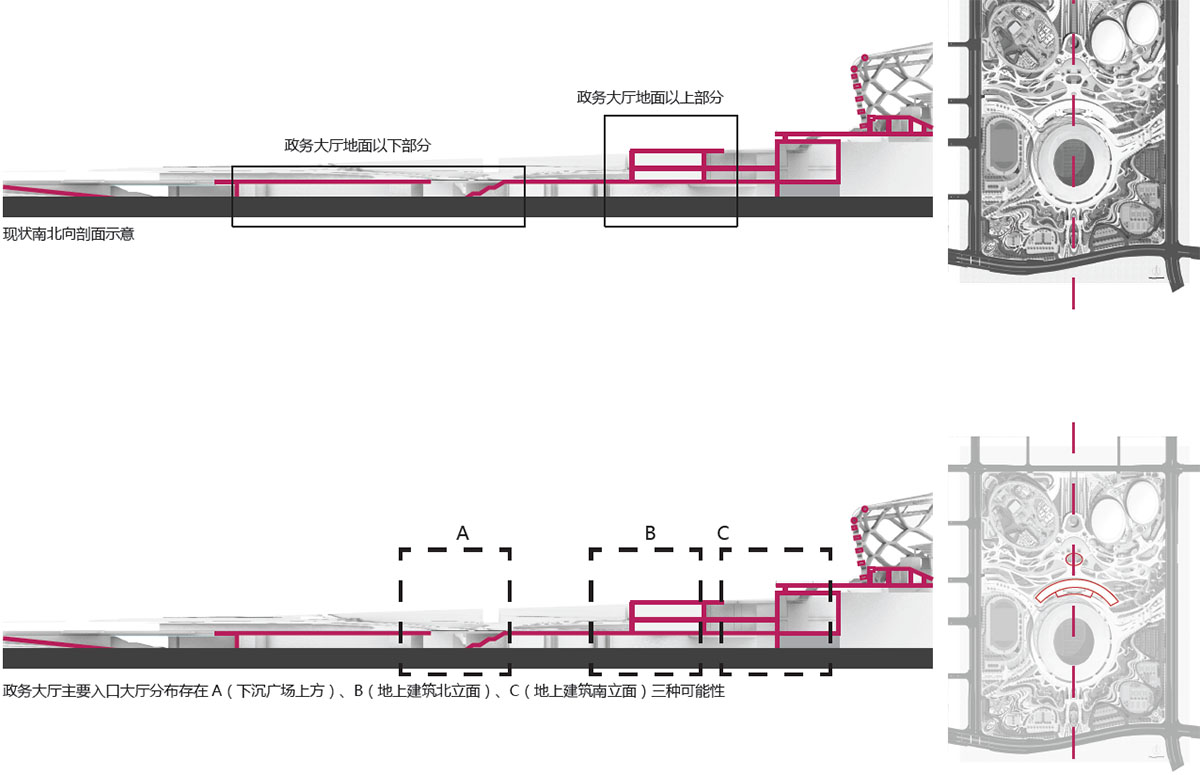 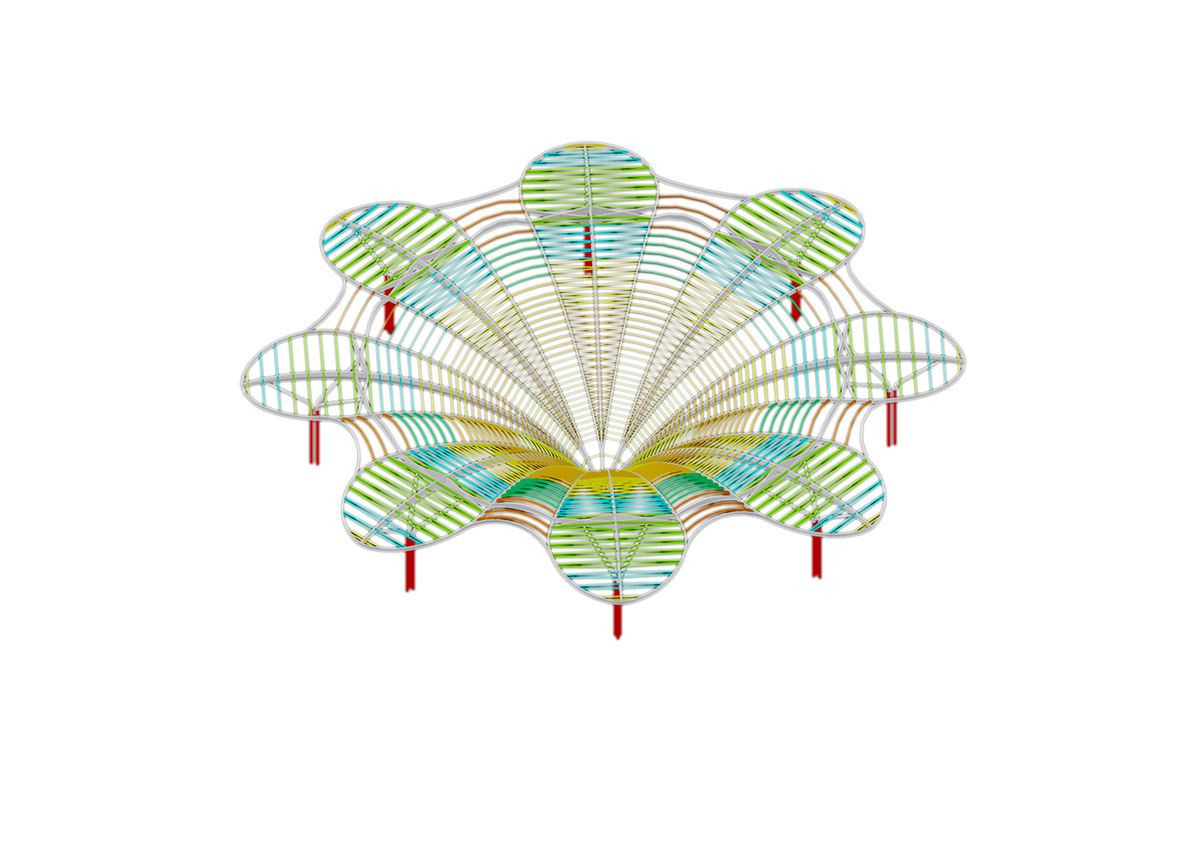 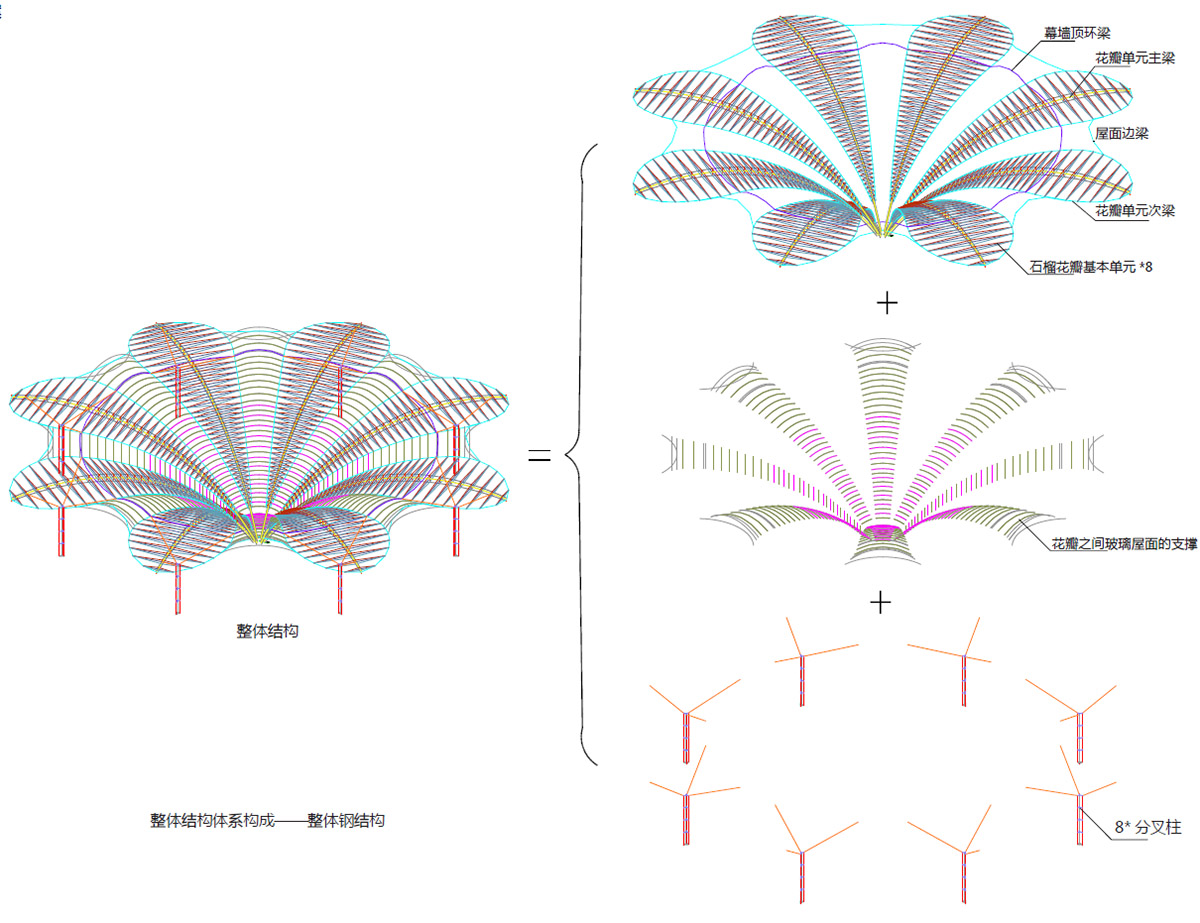 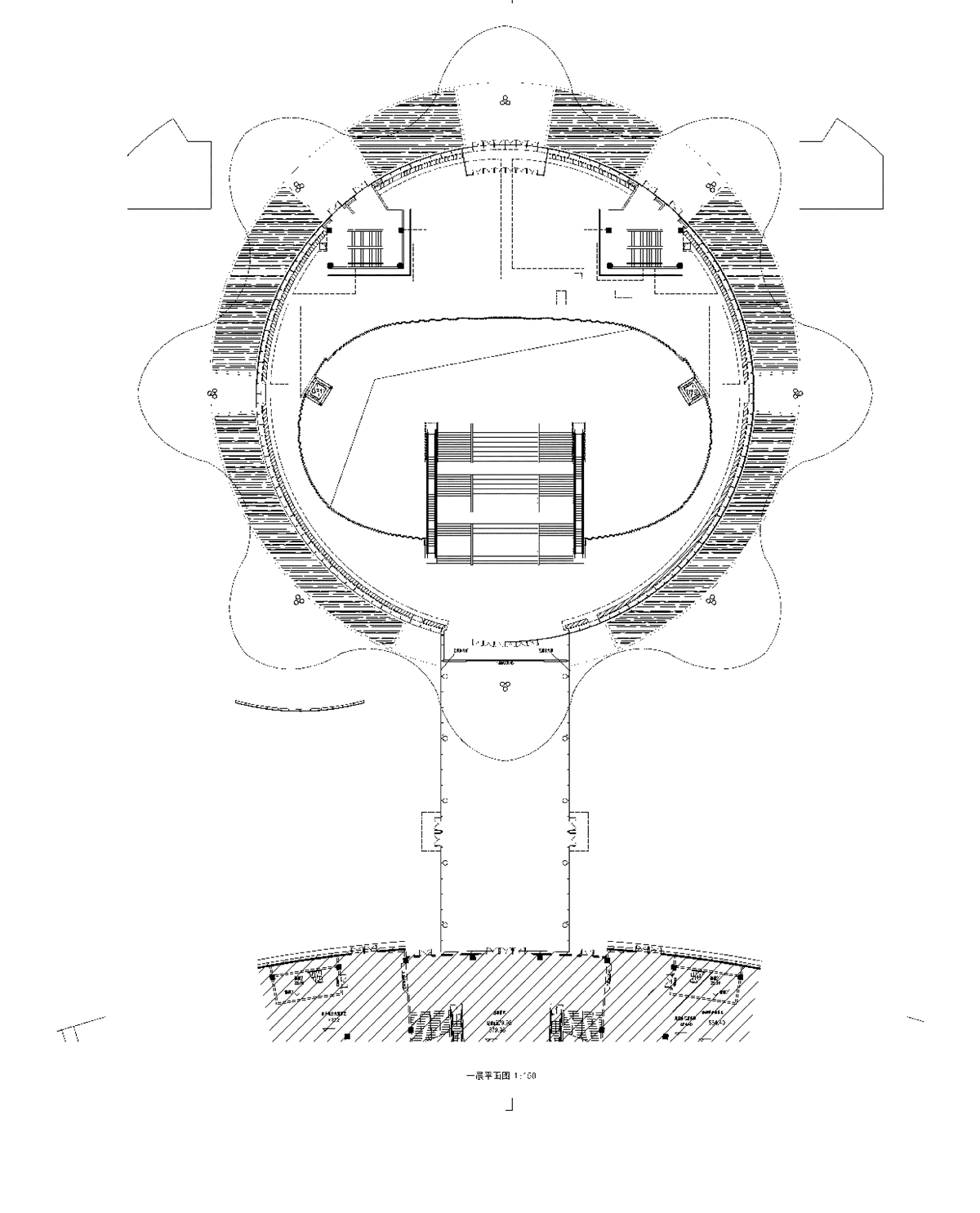 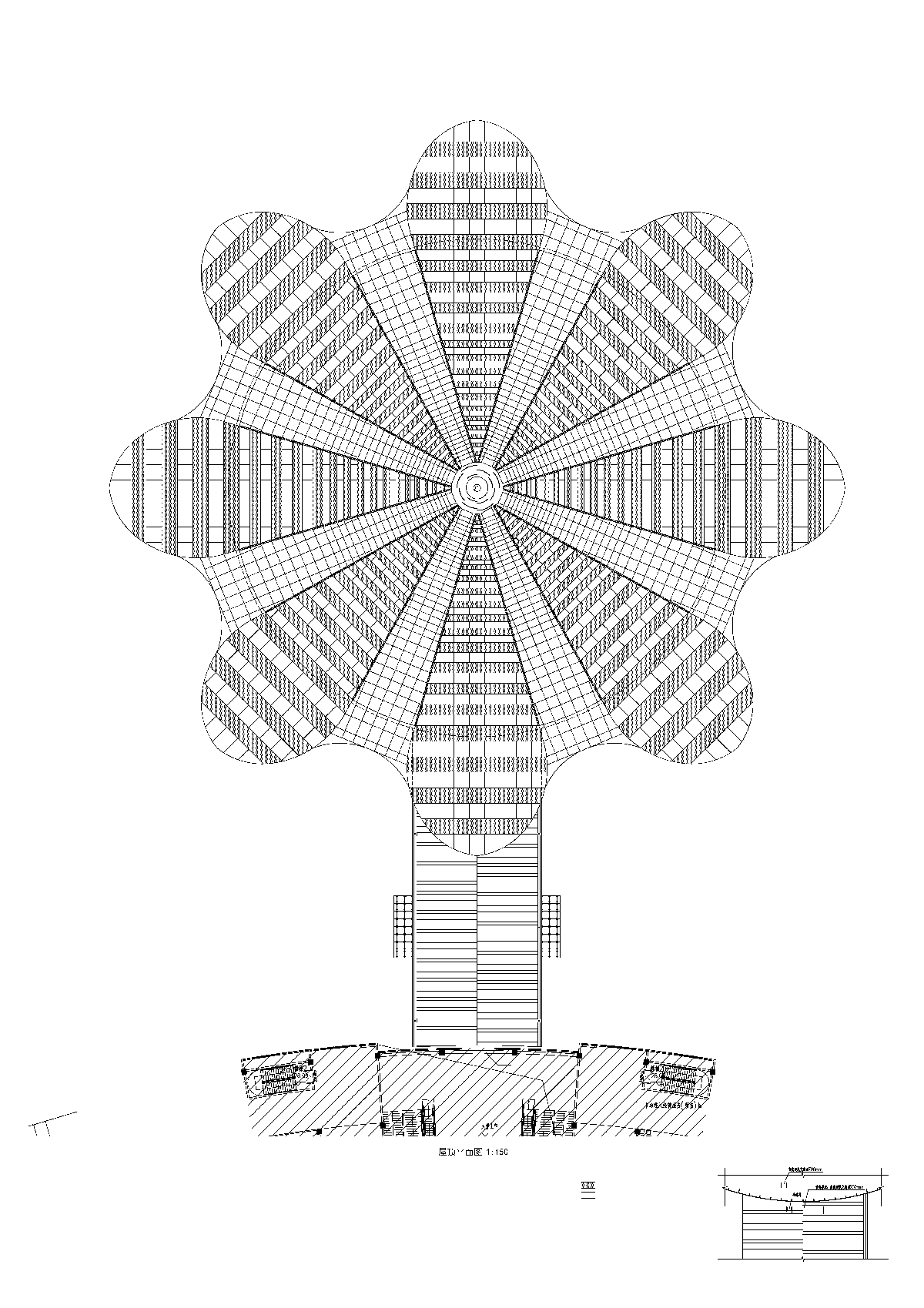 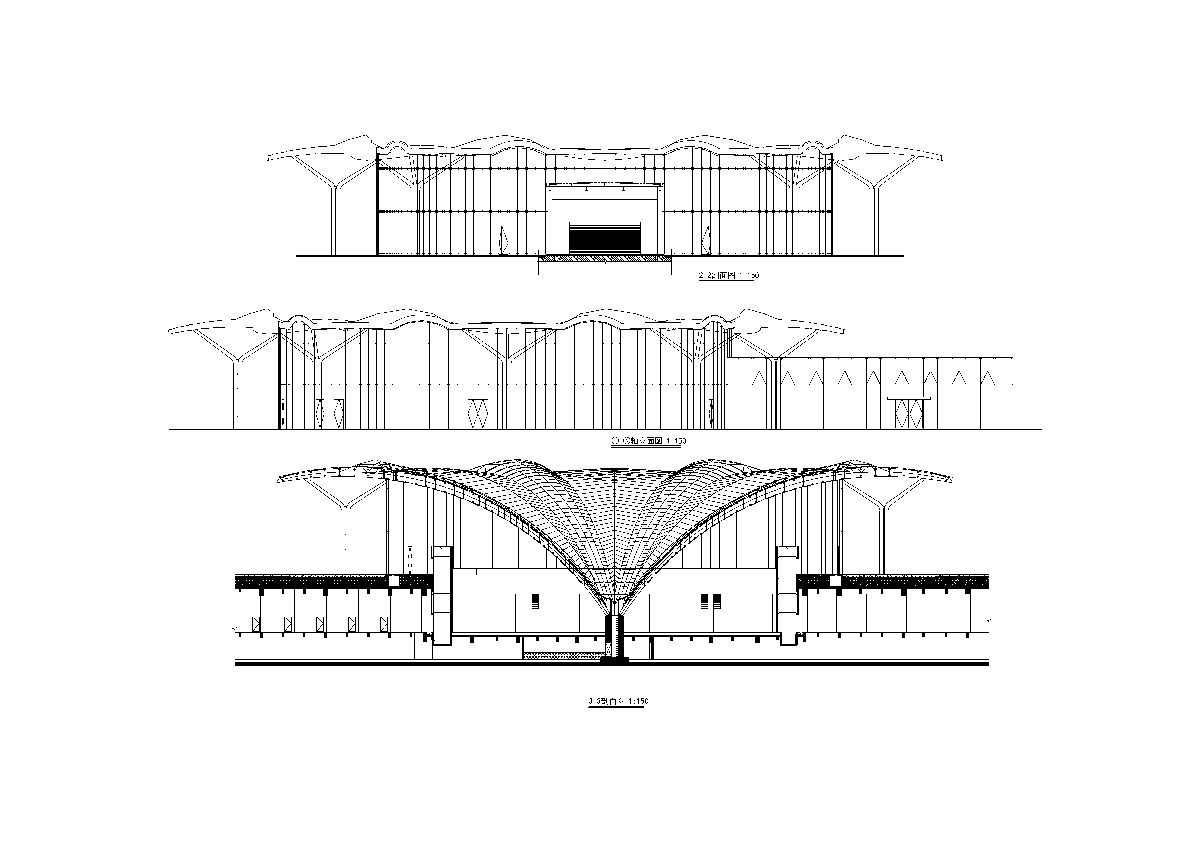 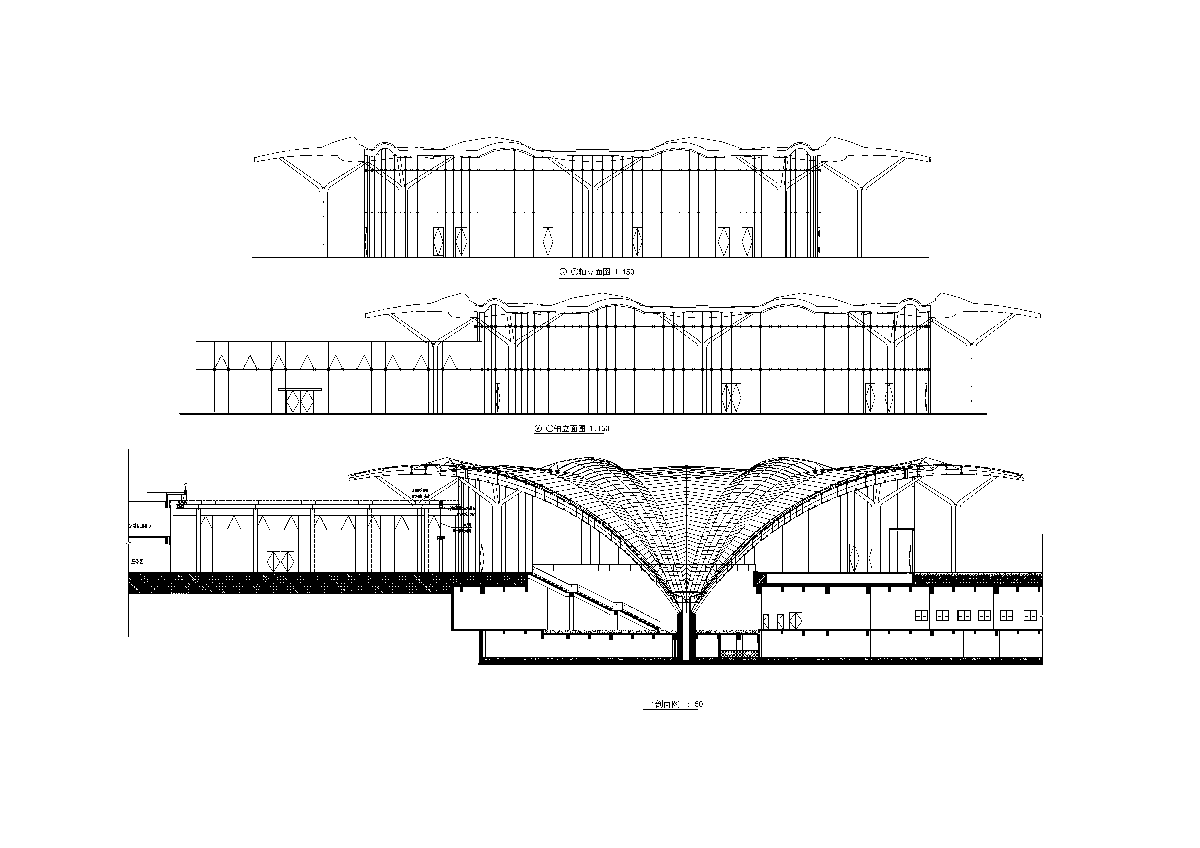