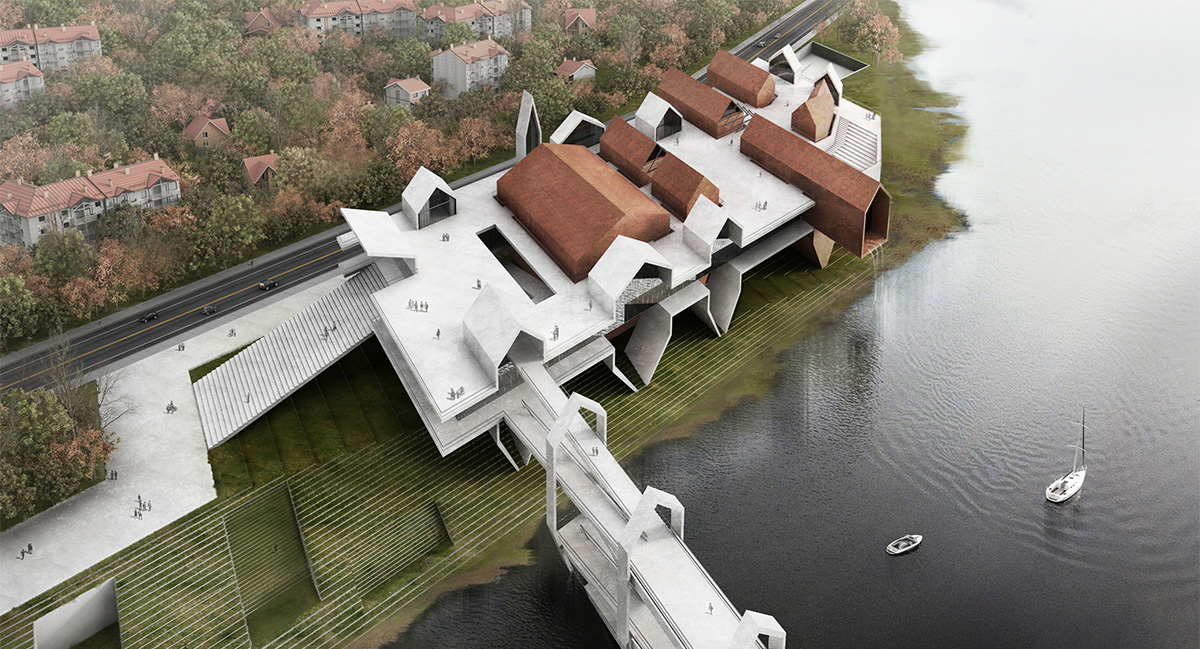 The project site in the southern side of the “Nemunas” river and its proximity to the cultural-historical zone of the “Kaunas” city made the design team follow a strategy in which the final outcome of the design process wouldn’t look like a stranger in the city, in which will lead Kaunas m.k. Ciurlionis concert hall to be a part of the Kaunas city. 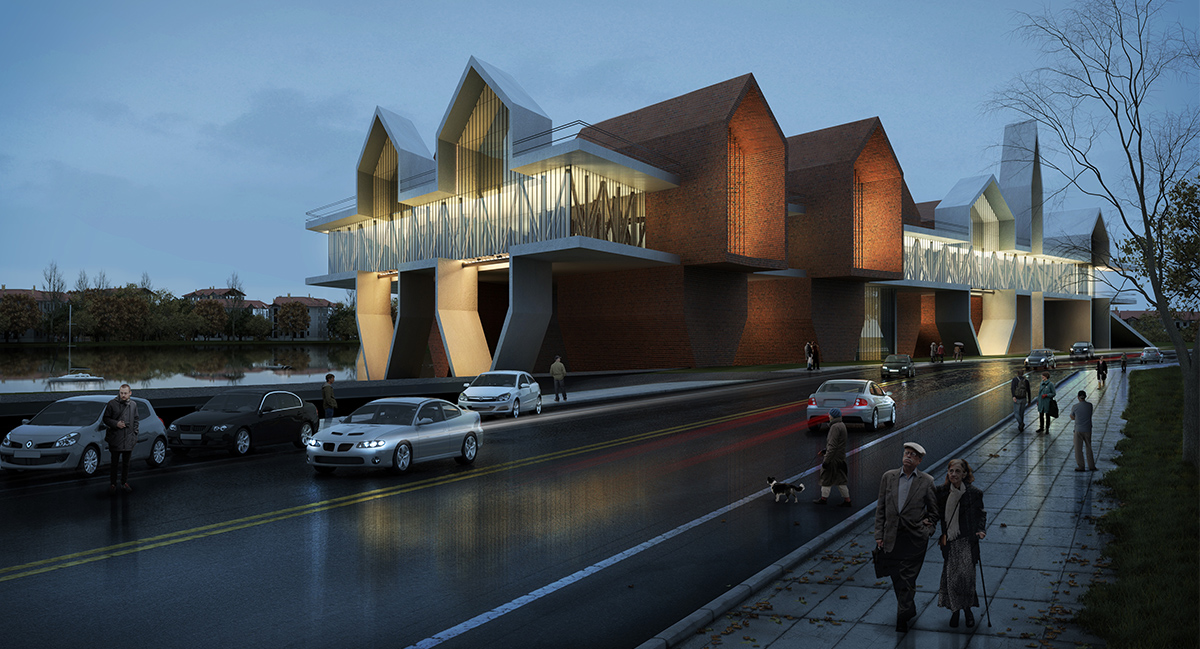 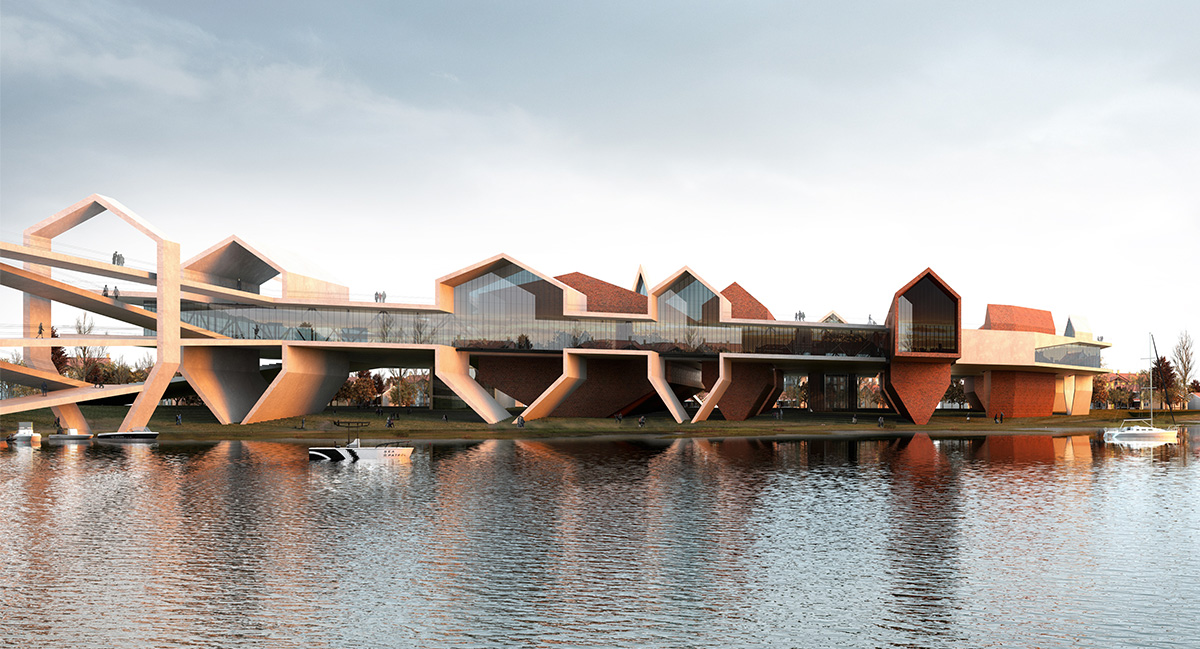 Using the urban geometry of old and historical part of the city was the first step of the concept design process. They injected a contemporary building to the existing typology by distorting the old geometry to fit into the project site boundary. Also, the city skyline of the Kaunas, and the order of the city building beside each other, were both inspiring for them in the design process. Designing public plazas will make an intimate relationship between the people and the project, therefore, by designing a foyer in the middle of the project skyline; there will be an interesting spatial experience in addition to the creation of a public plaza which acts as a deck beneath the project's roof. Designing the foyer by mirroring the project’s longitudinal section both solves the project’s structural issues and makes it a monolithic single unit of forms, spaces, and landscapes. 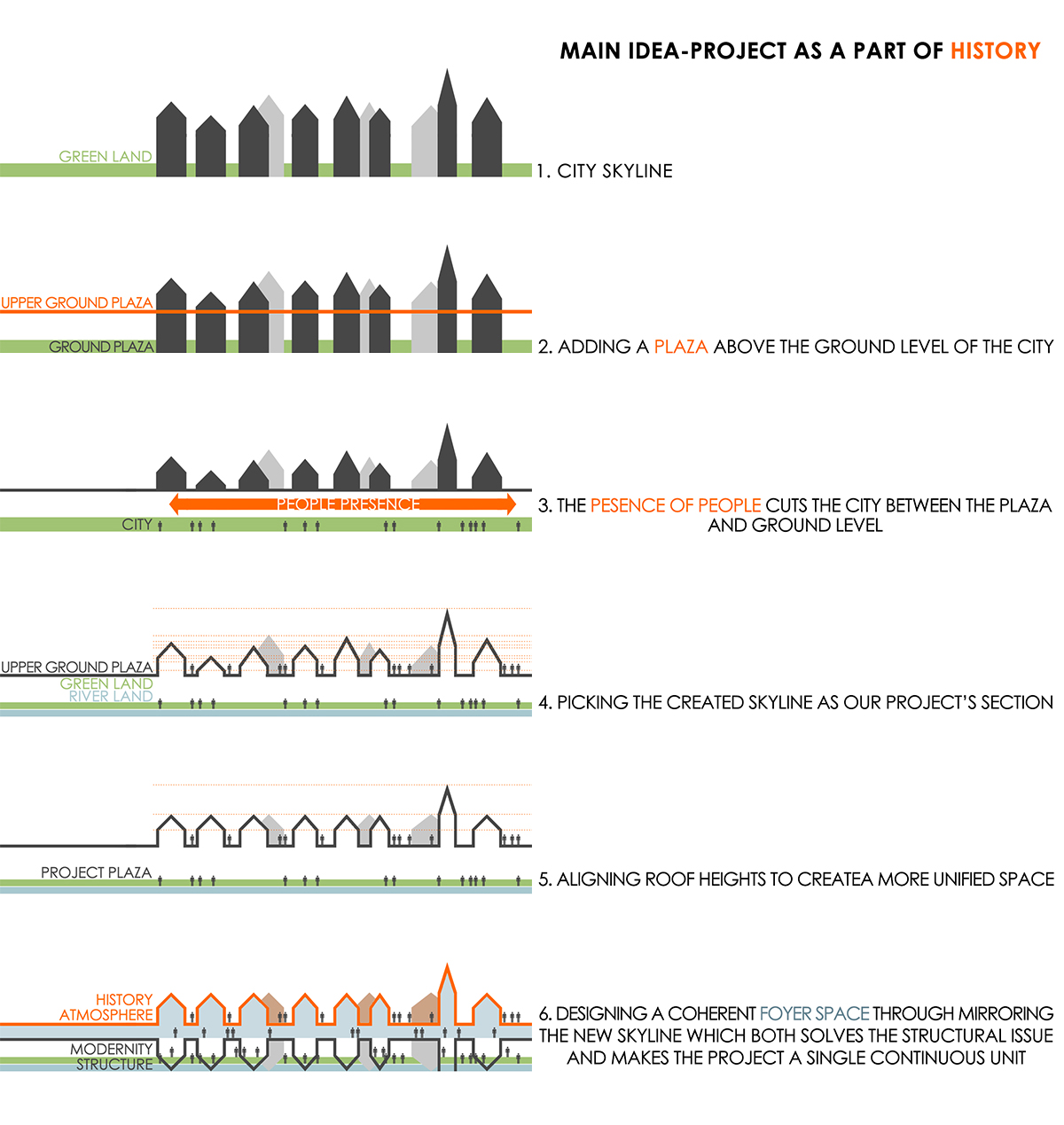 In order to express the landscape concept design process; after picking the site boundary and changing its geometry according to the city’s context-related qualities, they meshed the new-created site surface and due to the level differentials in the site topography,  the landscape stairs are designed all over the site. Some open-space amphitheaters were designed through intersecting voids with the landscape stairs too. For designing the masses and placing them on the project site, first of all, they picked a footprint of the city’s history, and after fitting the programed functions into the designed forms; they turned the two-dimensional into three-dimensional architectural volumes and modified them according to the functional requirements. After all, they potentially unified the forms and designed landscape in order to reach to a single architectural unit. Instead of considering the bridge as an outsider element, they considered it as a part of the landscape in order to create a gateway for walking/cycling from the existing island near the project site. 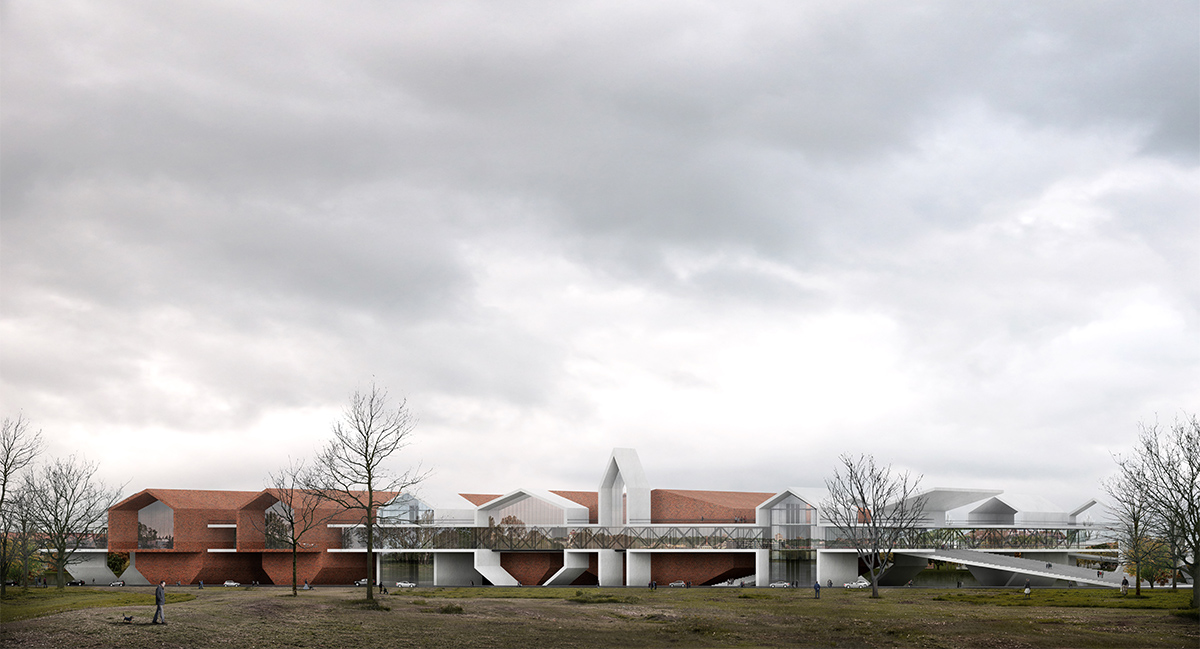 Public spaces as the main part of the project are divided into three parts including public spaces in the project site, foyer, and the project's roof. The first and the most important public space is the one that connects the pedestrian from the project entrances to the stair-shaped landscape of the project. Also, the pedestrians are connected to the foyer space through the vertical shafts and staircases. Some open spaces are designed in the project landscape to be a platform for performers to play and also create a public plaza for the people to communicate with each other. Also through the connection made between the landscape and Nemunas River, the users are more unified with riverside. After entering the foyer space, there is a connecting route to the concert halls and other parts of the project. Considering the urban furniture designed in the foyer space, the people will experience a panorama sightseeing to the river and the historical parts of the city. 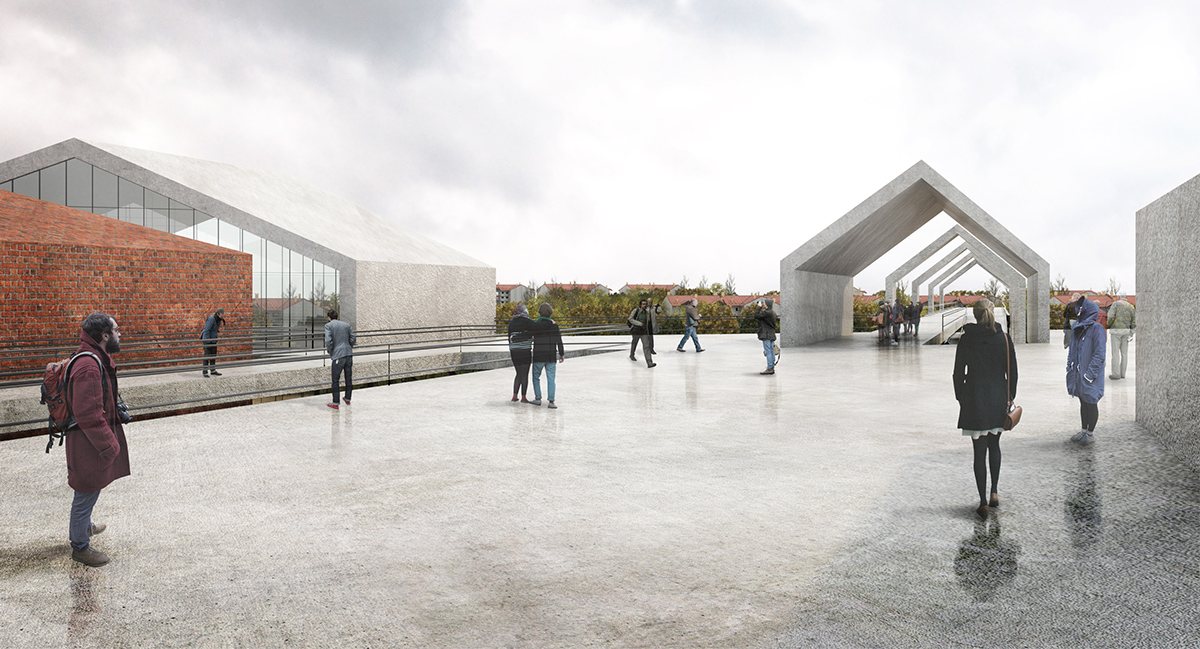 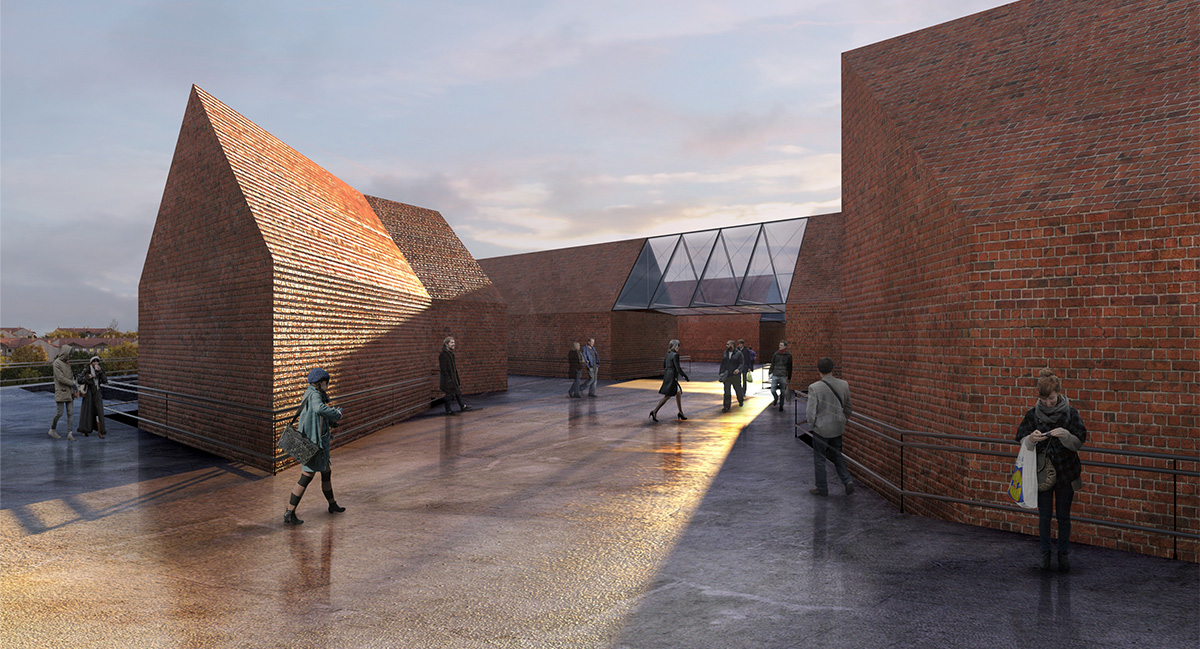 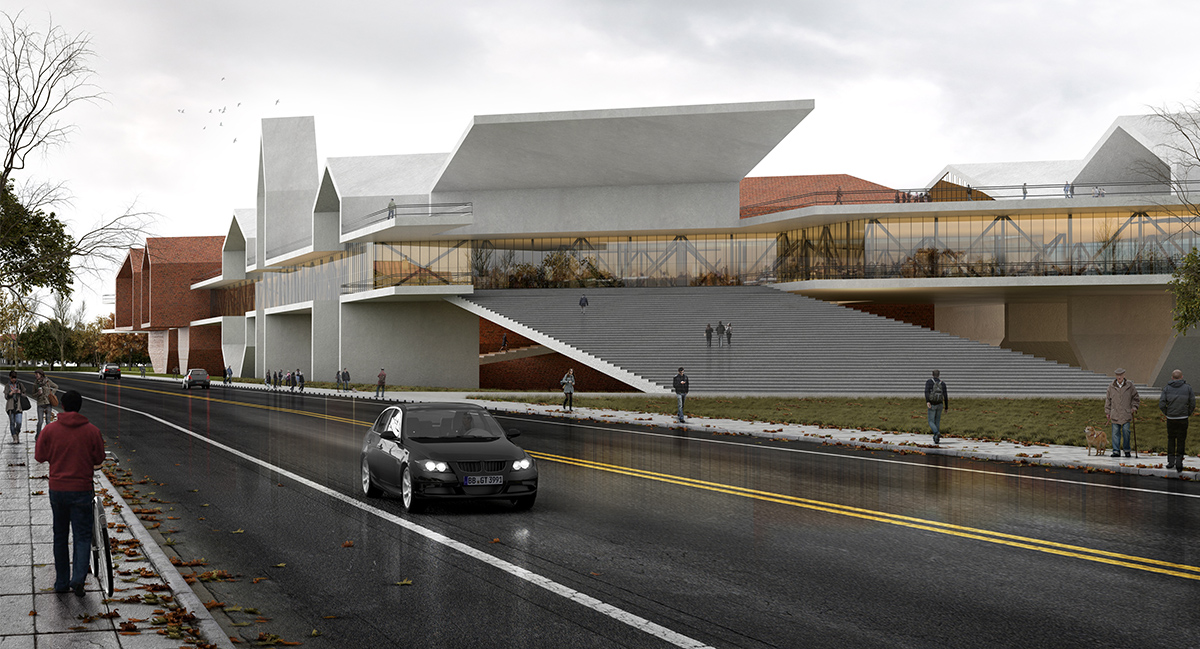 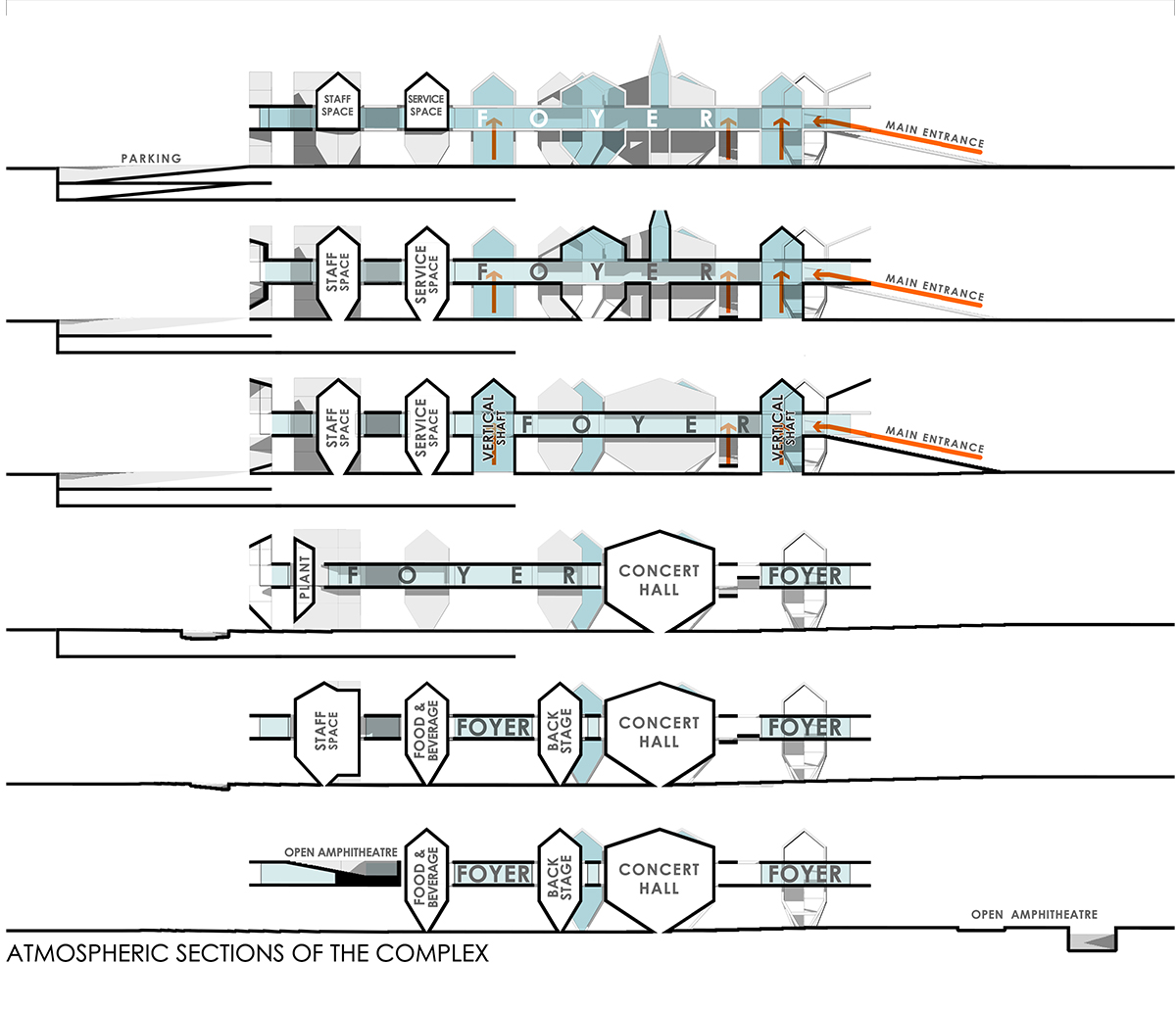 The space planning concept of the project is to turn every functional unit into a building of the city, as a conceptual expression of shaping the project from the city elements. Therefore, as the concert hall is defined as a kind of public spaces and a place for gathering people, and due to the main concept of the project, the concert hall's architectural design is derived from one of the most important buildings in the Kaunas city, "Kauno Evangeliku Liuteronu Baznycia" church. Therefore the presence of people in the concert hall acts as a metaphor for the people gathering and praying in the historical, valuable church. So, given the fact that the project has a modern atmosphere, it reminds us of the commune of the past of the city of Kaunas. According to this symbolic conception, project users are conceived in the churches of the old city of Canadians, while presenting themselves in the concert space and this is a symbolic expression of the sense of space. 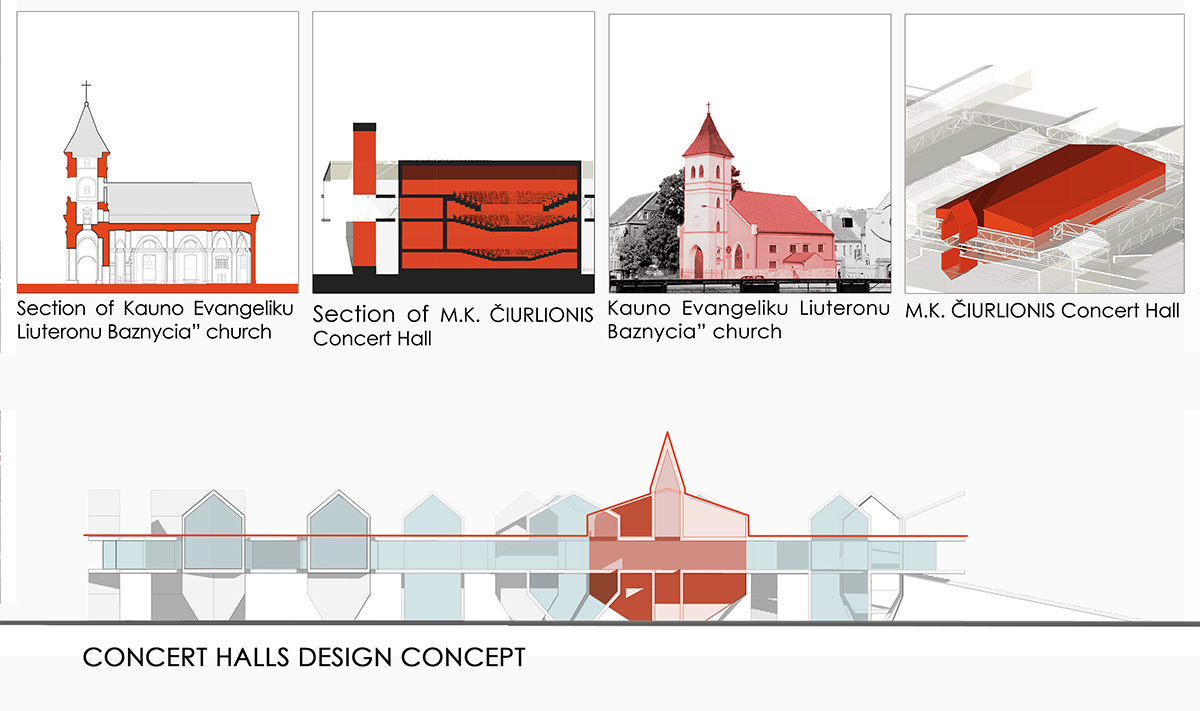 Considering the project’s main idea “project as a part of the city” functions are developed through a metaphorical aspect. Therefore the functions are divided into three main parts such as public spaces, concert halls, official and service space, by considering their connection with other spaces, users, and working time. On the next step, each one turned into a local-house-shaped building, depending on the building’s specific function. The public spaces and the foyer space were made such as the allies and urban spaces among the main functional masses and also made the connections between these functions to be possible. Also, the public areas and official areas, if the project were shaped in two divided parts. Therefore, the official areas have a close connection with the public spaces, even with the consideration of official spaces as separated units in the project. Due to the expressed program, every individual function such as service space, staff space, and mechanical is designed in a single, separated unit locating in the official area. Restaurants, concert halls, conference rooms, backstage, and the related mechanical room are divided into four independent functional units. The pedestrian connection between noted spaces and function is made through the continuous foyer space. 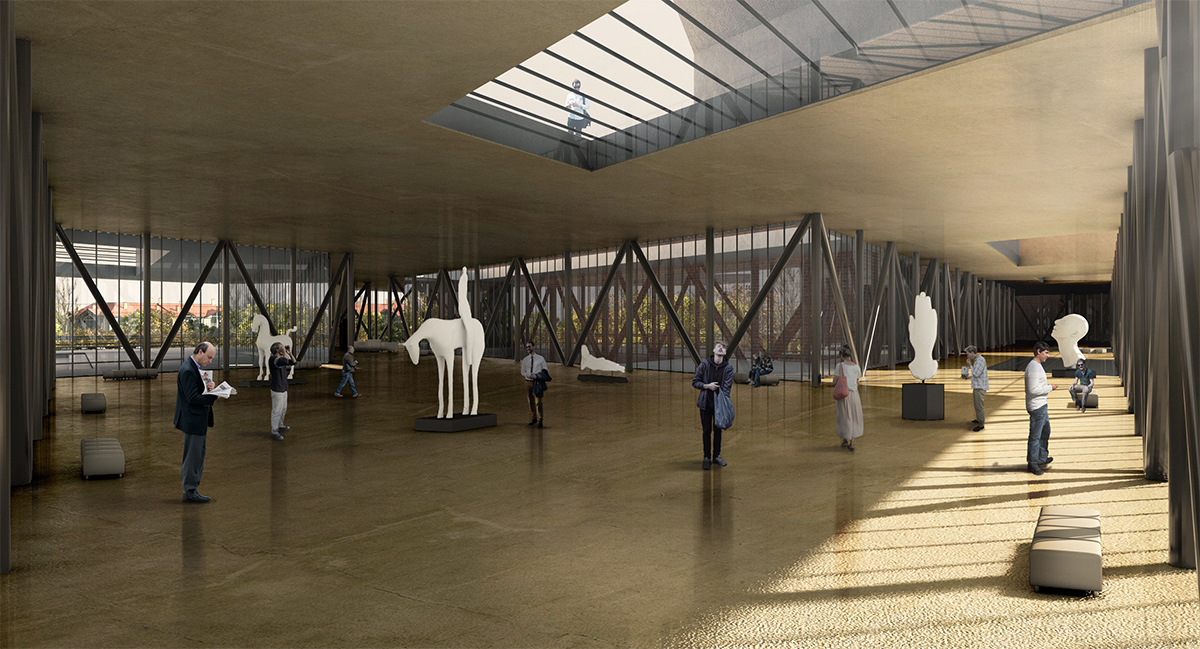 Sustainability is one of the most important factors in designing this project, and the project progresses with respect to various parameters of the firm's stability. First of all, they tried to study the factors affecting different aspects of sustainability such as climate stability, social sustainability, economic sustainability, and so the design is based on these factors. Regarding the climatic factors, they tried to design the project as compact as possible, so that each section would be separated in a building package, and thus there would be better manageability over-controlled and uncontrolled spaces. In order to further enhance the use of renewable energy, OM's solar system was proposed for each of the buildings to warm and condition the interiors by solar heating. The OM system is one of the most advanced solar systems in domestic heating. Storage and use of rain and snow were also considered in this project. As a result, water from snow and rain is collected in storage tanks in the lower part of the buildings and for other purposes such as washes, sanitation, irrigation of green spaces, etc. 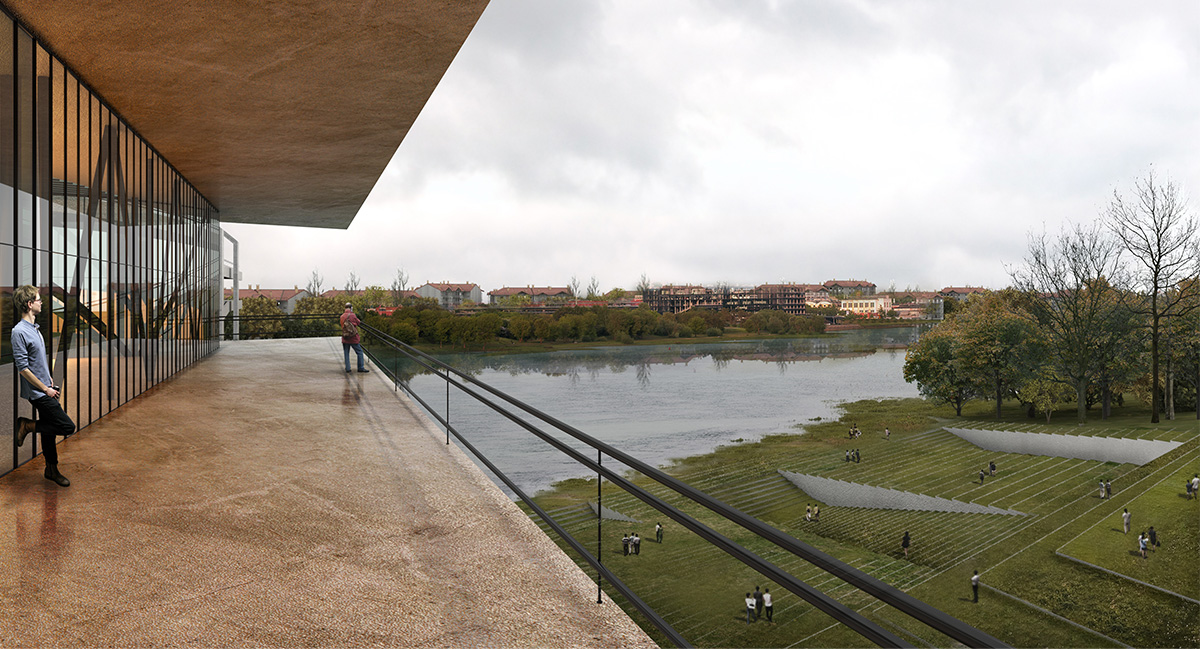 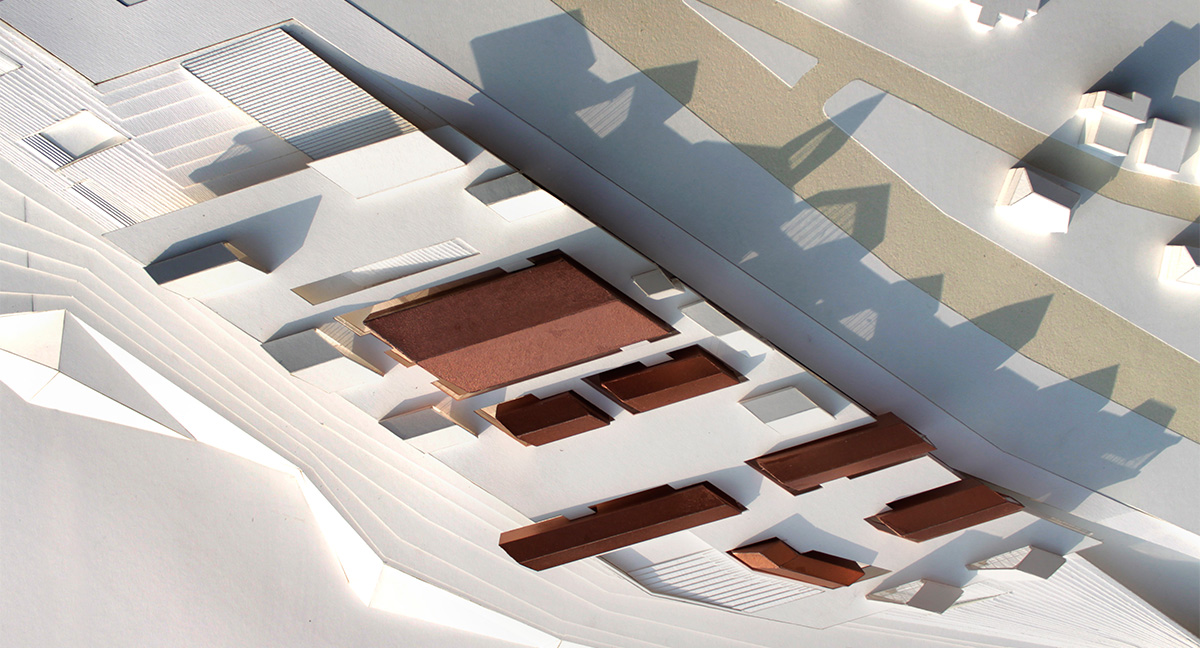 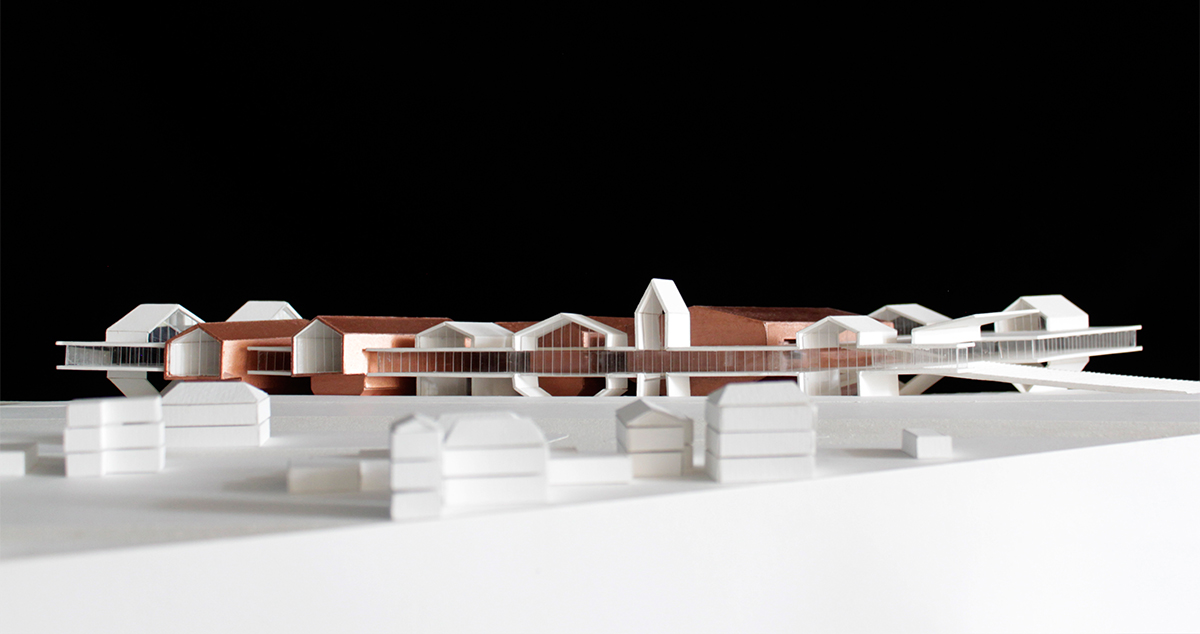