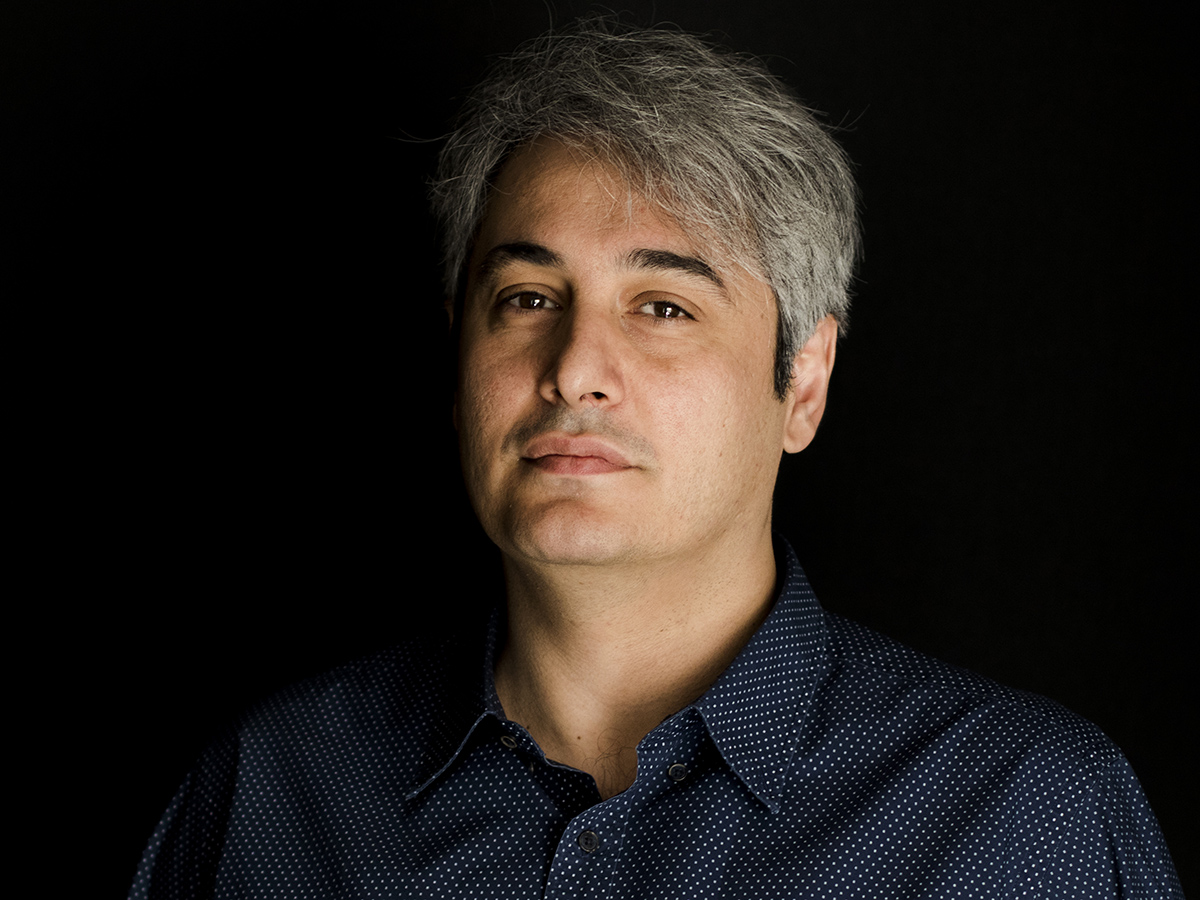 Alireza Taghaboni, a practicing architect since 2004, founded Next Office in 2009. He is also a painter and holds a Ph.D. in Architecture. A frequent contributor to Iranian architecture and urbanism magazines and periodicals, he is a tutor and partner at the Contemporary Architects Association of Iran (CAAI), a private institute in Tehran that offers an alternative education program to formalized pedagogical frameworks of the country.

In this particular interview, we talk about Taghaboni's point of view toward architecture and also about the project named "Sadra Civic Center" which is designed by Next Office.

Read the full transcript of our interview Alireza Taghaboni below:

Hanieh Lotfipour: Dear Dr. Taghaboni. I deeply appreciate your time and cooperation. Would you mind telling us a little bit about the key points in your background?

Alireza Taghaboni: I have been a practicing architect since 2004, and have founded Next Office in 2009. I got into architecture through art. In other words, my interest in literature and later in the visual arts made me eager to enter the field. Accordingly, for me, architecture is always something between an image, a sculpture, and a narrative. In fact, it is something between and beyond these key elements. This has made me act like a writer, and a seeker, who wants to discover a series of contradictions in society and in the subject of the project and even in the site; and care to respond to them. I also try to find answers through the lens of the visual arts. In other words, I see the project as a work of art, that should try to create questions for the viewers, and also have an impact on them.

Alireza Taghaboni: Architecture, is any sort of organizing and interfering with space. But from my point of view, it is kind of interference with space, in which you can first observe the subject with a searching look like a detective, and make the imperceptible issues visible, and then narrate it like a reporter or a writer, and finally, like an alchemist, turn it into a work of art that integrates all of these. In essence, it is active interference with space, in order to increase the degrees of a man’s enlightenment and awareness of his surroundings; or to change and increase the quality of his life.

Hanieh Lotfipour: What factors do you pay the most attention to in creating architectural spaces?

Alireza Taghaboni: We are currently publishing a book on the projects of our office, called "The Duals". In this book, we discuss in detail how each of our projects tries to discover a contradiction or a conflict, and then extract it from the outside world, and narrate it. Our projects, then attempt to turn the resulting narrative into spatial, formal, and structural scenarios, so in this way, they generally try to communicate with the outside world. Furthermore, that's why we've been able to observe a variety of duals in our projects, such as hybrids, complements, collages, and binaries. 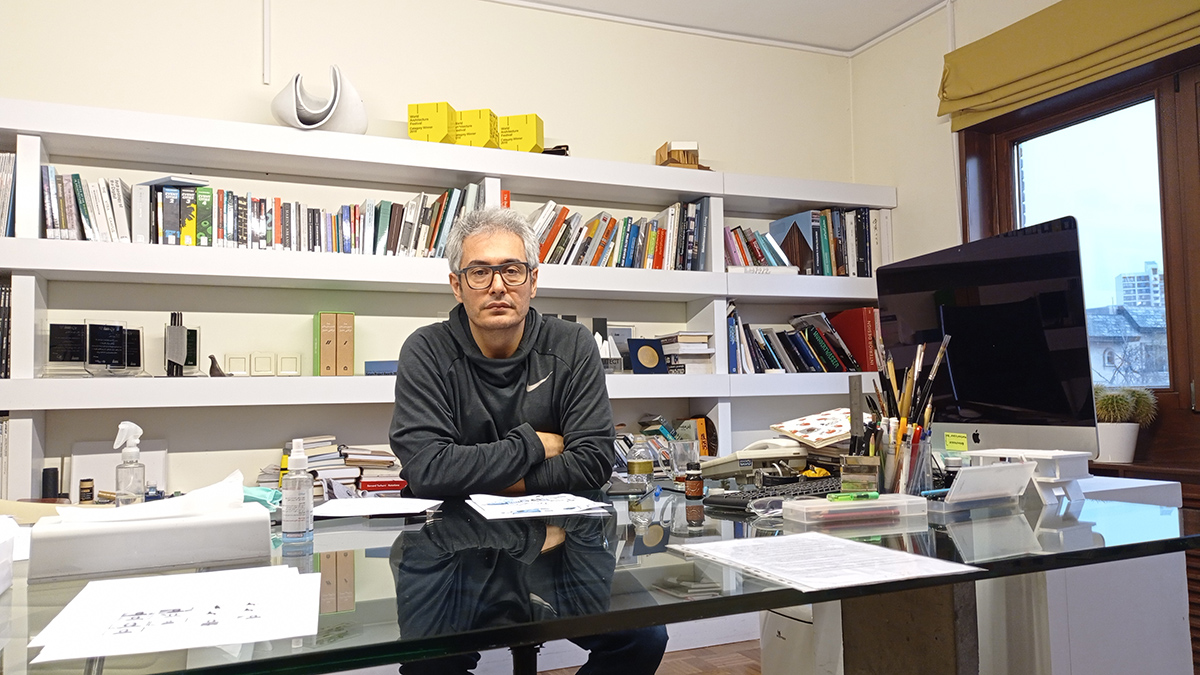 Hanieh Lotfipour: What is the distinction between your designs and other architects in Iran and the world?

Hanieh Lotfipour: What is the importance and place of form in your designs?

Alireza Taghaboni: Not only in terms of form but also in terms of space and structure, we are of the opinion that they should all be active. In other words, we do not believe in neutral architecture in silence, and our main belief is that architecture should speak more boldly and expressively. Therefore, both form and space have an agency for us. That means they have the power to change, and the power to influence. So, we use the form actively, just as we actively use the space, and this requires that we have complete control over the form and the formal topics.

Hanieh Lotfipour: The criticism that is sometimes leveled at you is that, in some of your designs, you have only paid attention to the form and not to the context. What do you think about it?

Alireza Taghaboni: In our projects, the forms basically follow our strategies, and our strategies are generally based on observing and analyzing the things that are either in the program and are the subject of the project or are in and around the project. So, our forms are a kind of visualization of these issues and a kind of support for the project strategies. And finally, yes, forms are very active in our work and projects, but designing the form is not our starting point.

Hanieh Lotfipour: In the previous article, we briefly introduced the Sadra Civic Center. We look forward to hearing more about this wonderful project from you. In this regard, I begin my questions with the design process of this memorable project. Is it possible to explain this?

Alireza Taghaboni: The site of this competition was next to the Mehr Housing project (Mehr Housing is a national program of social housing that aims to accommodate low-income groups of people in Iran). In fact, the question in the new city of Sadra was how this project could be the antithesis of the Mehr housing project in different ways; given the Mehr social housing’s many problems due to its low quality. In other words, if the negative spaces in that project are all just the remnants of the residuals; here in this project, unlike the Mehr housing, the negative spaces form the main spaces of the project, and like the old urban projects of Iran, it consists of a large number of central yards, which are all related to each other. Or if that project does not include a social focus and social activities, in this project, a large number of communities can be formed for social activities. If the Mehr housing project is completely abstract in terms of form and construction methods and can be implemented everywhere; this project is specific to this site. It owns a distinctive relationship with the ground and the sky; as it slides on the ground step by step, and has a very active skyline that creates a conversation with the skyline. And also, the construction technique is something that is completely based on the reality of the site; for example, there is plenty of soil there, so we have used the Rammed Earth methods. We can even say, that there are no predicted welfare infrastructures in the Mehr project’s programs, and it has no servicing, recreational, or sports spaces. Therefore, in this project, these service spaces should be abundant so that they can even serve the Mehr social housing too. So, this project has tried to be an antithesis of, and a complement to the Mehr social housing on different layers; both in terms of the relationship with the earth, mass and void, the circulation that takes place among the interconnected yards; and in terms of technology, form, materials, and program.

Hanieh Lotfipour: What were the problems in the design process?

Alireza Taghaboni: Since the project is in the concept stage, we have not encountered any particular problem. Of course, in the design phase, with a field condition of a regenerating genome, our challenge was the possibility of losing the legibility of the project when the audience were present in it. So, we tried to meet this challenge by making the scale of the elements of the project larger and smaller. To put it another way, the larger the yards and elements, the more public the spaces are, and the smaller the yards and the heights of the elements, the more private and residential the parts become. Another important point is that unlike the Mehr social housing, which is practically two-dimensional; in this project, the levels of height are always changing. There is basically an internal circulation among the courtyards and a general circulation that can go up and down the roofs, as shown in the project’s animation.

Hanieh Lotfipour: What is the distinction between this project and your previous projects?

Alireza Taghaboni: It cannot be called a distinction, but it can be stated that this project has the maturity of several of our previous projects, in which we tried to make the best and the most accurate use of what we have had in the past. Because I believe that the past is like a banquet, and you can refer to it and take whatever is good for you. And we believe that in this project we have taken the right things from the past. The project both formally and spatially connects with the contexts of old cities like Kashan and Yazd; and also with our contemporary heritage such as Tehran Museum of Contemporary Art, etc.; however, this project is none of these and does not stop in any of them either. Although it uses very traditional materials and benefits from the forms that are rooted in the ancient architecture of Iran, it is quite contemporary. And finally, the point that is very important to me, is to stand on the border of the old and the new. In other words, to stand in a place that is both familiar and unfamiliar. This fragile border is always attractive to me.

Hanieh Lotfipour: Eventually, is any noteworthy fact and point you are interested to add?

Alireza Taghaboni: Referring to the past of the Oriental works, is generally exotic and nostalgic. We clearly try to avoid it, that is, we believe that we should be able to create a space that has only used the capacities and solutions of the past, without making it exotic or nostalgic.

Hanieh Lotfipour: I appreciate your time and we are all looking forward to your new fantastic projects in near future.

Alireza Taghaboni: Thank you so much for the opportunity and for taking the time for this interview.

All images © Next Office