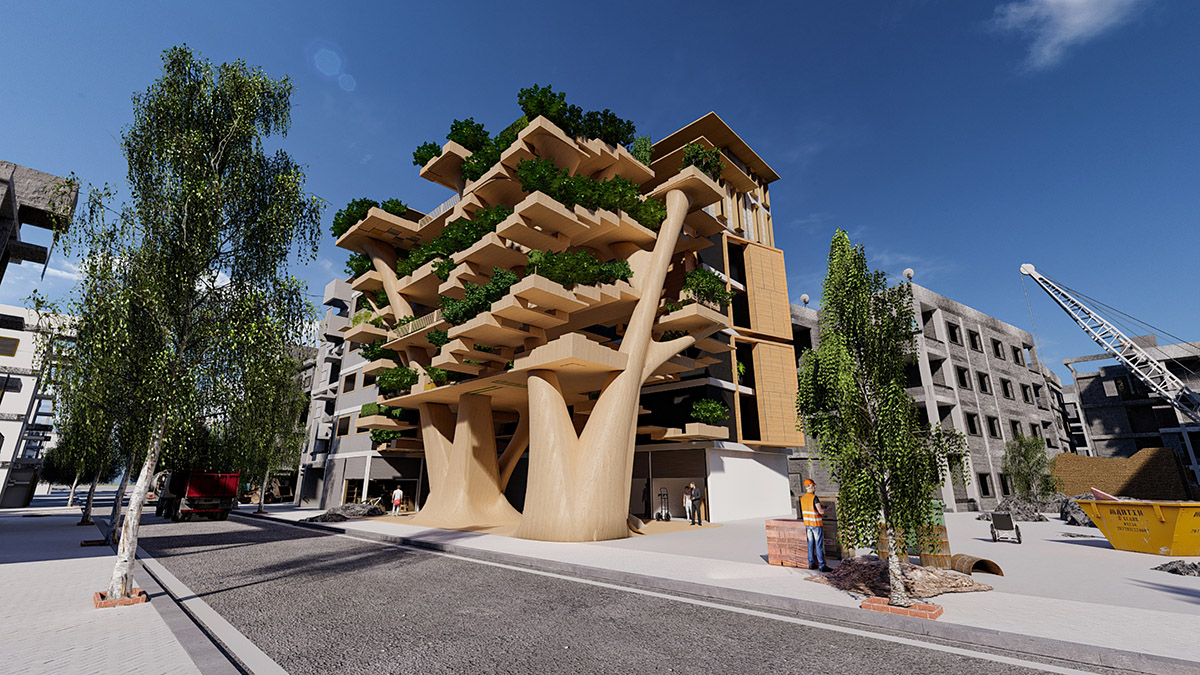 Damascus-based design, research and consultancy firm Reparametrize Studio has released its proposal to transform a damaged post-war Syria building into a co-living building with public green areas and amenities.

Named "Re-Coding Smart Building", the project is part of an ongoing research undertaken by the studio to analyze damaged buildings of post-war cities in Syria by using 3D scanning technologies.

The proposal was submitted to "Hybrid City Challenge" architectural competition, and the studio's design was shortlisted among the top 10 alongside from 22 countries in the world.

The Hybrid City Challenge competition's aim was to build at breakneck speed to support the ever-growing need of housing – while keeping expenses low. The key design intervention for this existing four-stores building was the insertion of a vibrant central garden courtyard with Kerto LVL (Laminated veneer lumber) developed by Metsa Wood Company.

"The value of this material is lowering the carbon emissions and long structural spans," said the firm. 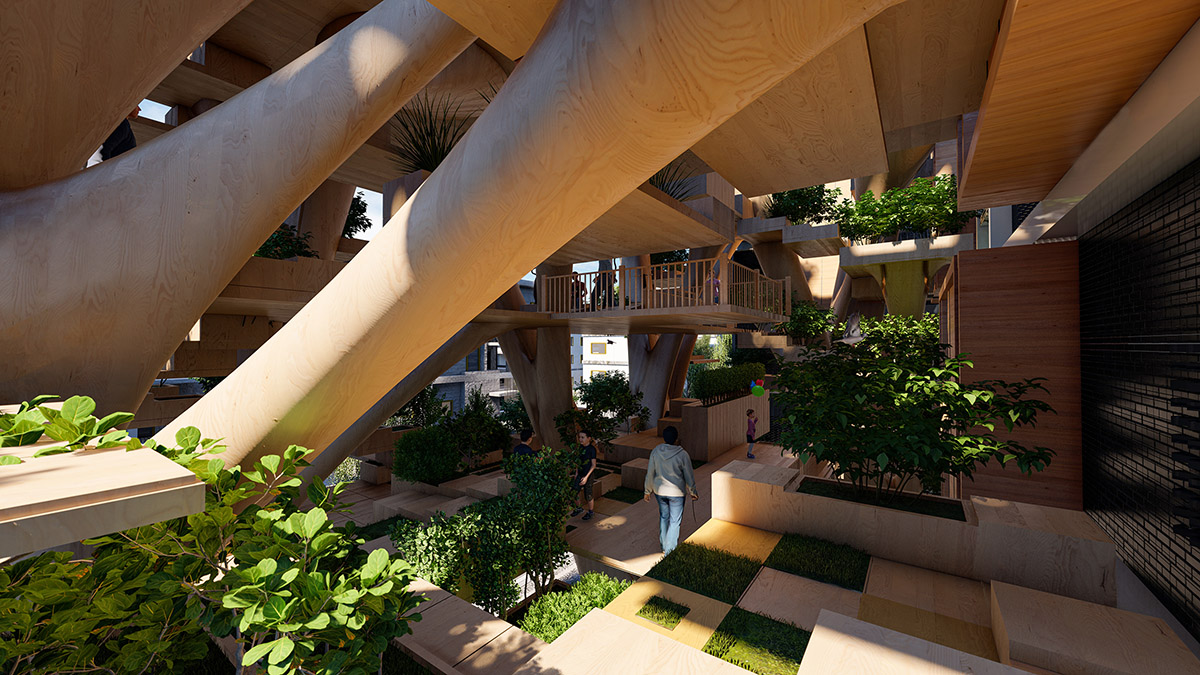 The studio formed a full integrated system by adding this green component in the severely damaged building elements such as slabs, columns, and elevations while maintaining the elements which are in good status.

With the benefit of today’s smart global technology, the architects used to visualize the future of post-war smart cities.

"We are working to pioneer a new methodology to regenerate the future of post-war Smart City," said Reparametrize Studio. Using 3D scanning technology combined with state-of-the-art rapid FEM structural they have been able to analyze large structural data volumes and properly assess the structural state of the targeted destructed building using this technology to serve affected people and their society. 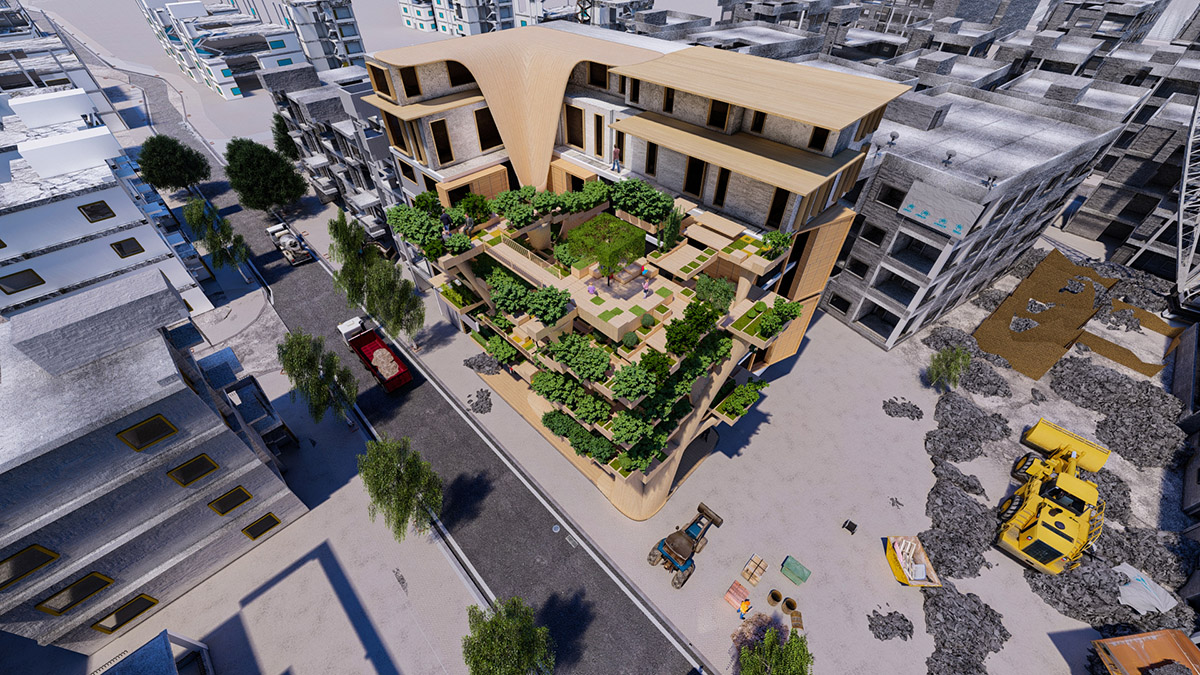 "By the end of the Syrian crisis the inhabitants who went back to their original destroyed residences with the lack of a social, ecological, commercial place, there was the big challenge "how can we fill in these gaps?"….back to the very old traditional Syrian House and its high efficient courtyard "Ard Al Diar" which was a perfect model for a social-environmental place with cooling and heating techniques that adapts with seasonal changes," said Reparametrize Studio.

"Attempting to examine the natural ecological values in this regard and define these values generally as the level of benefits that space, water, sun, vegetation, eco recycling, sustainable materials, social activities, and all other factors that make up natural ecosystems provided to support affected buildings as a core vital system." 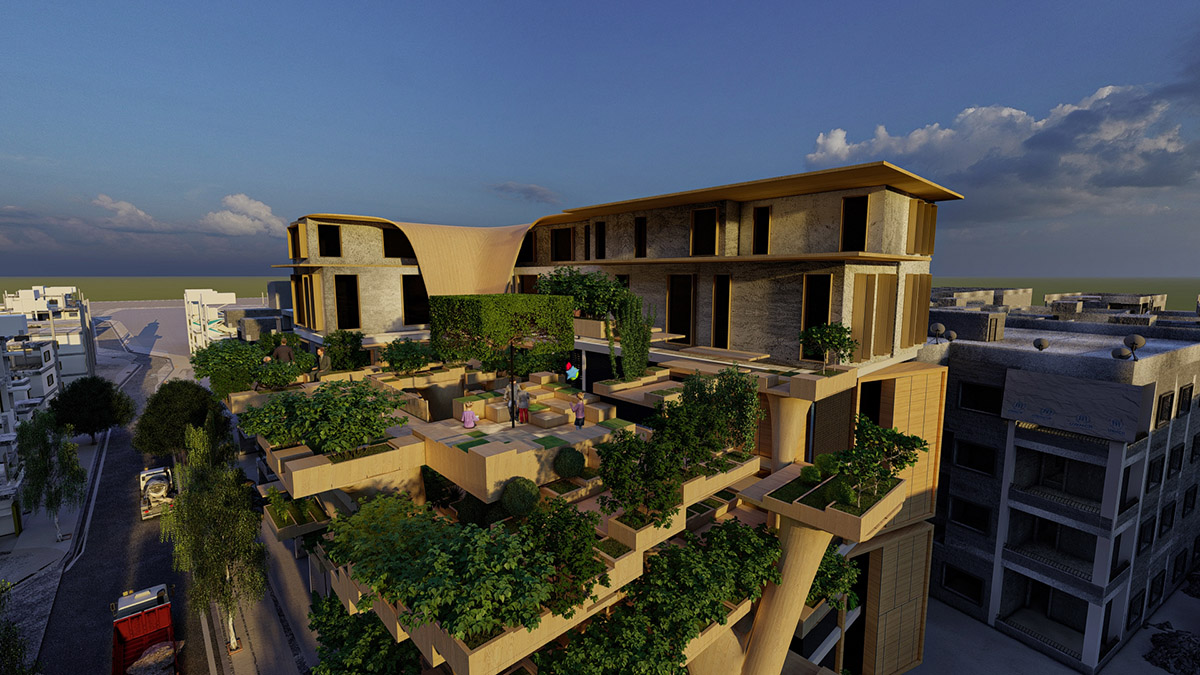 Developing passive traditional systems into a new smart ecological system, they created a vertical courtyard in the form of overlapping LVL slabs: social, semi-private, private slabs that achieve a new vision of “co-living” giving copious amenities for residents, including public green areas, a vegetable garden, green roof, physical activity zones and relaxation spaces, all interior living spaces are oriented around this courtyard which facilitates a strong visual axes while maintaining an essential part for privacy. 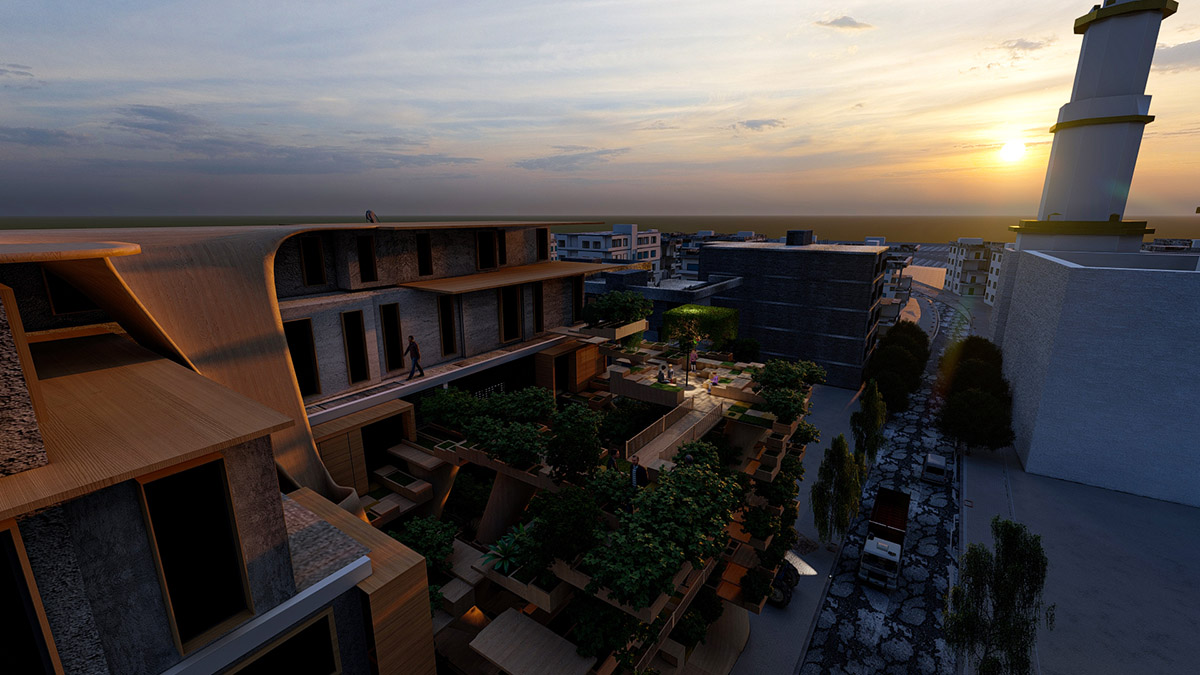 Each of these generous garden terraces provides the 15 apartment with natural ventilation, energy production and recycling sources "they resemble the heart of these apartments".

With the benefit of Kerto LVL long span, these slabs are placed on a massive LVL, tree-shaped L-System, which has a self-efficiency system of  water pipes for rain harvesting, heating and cooling air pipes and cables for smart insulations and sensors, all linked to one network that collects, automate and analyze building data. 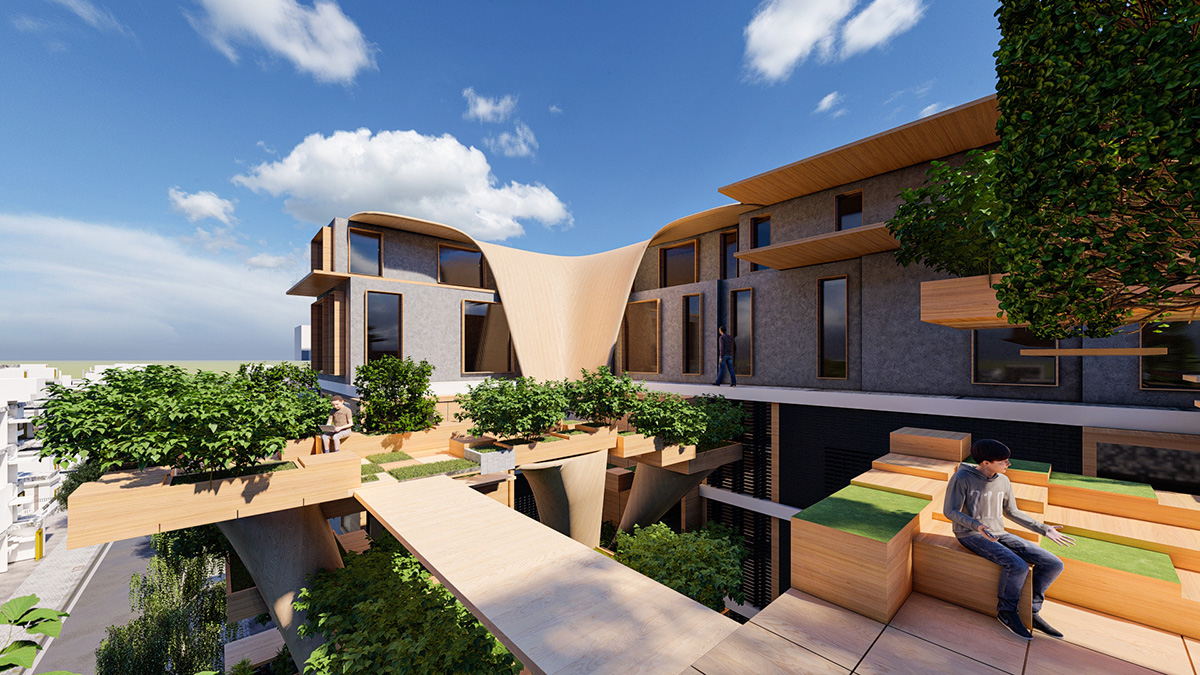 One of Kerto LVL major features is reducing CO2 emission, and with greenery terraces, thanks to this, the studio had this perfect combination that adds a great ecological value.

"It’s like a breathing lungs for the whole building," added the office.

"Some of these slabs are designed for vegetation purposes so that the inhabitants can plant their own needs of vegetables, besides that they can make their small investment by selling these vegetables in the building's ground floor stores, also by being a distributor for the whole neighborhood." Accomplishing a beating methodology that can enhance a whole new life of a smart, ecological, high efficient system that can be adapted to any post-war damaged building, with the high utilization of nowadays technologies. The design scheme creates a new, recognizable identity for the area and increases the quality of everyday life.

"Reparametrize studio sets on the task of how to visualize this data and let both the community and the decision-maker interact. The team also used social media platforms and ground surveys to collect data from the local citizens and the refugees who fled the country about their expectations of the post-war redevelopment of their home areas, resulting in a very cost-effective and much more sustainable post-war redevelopment," added the studio. Plan of the building 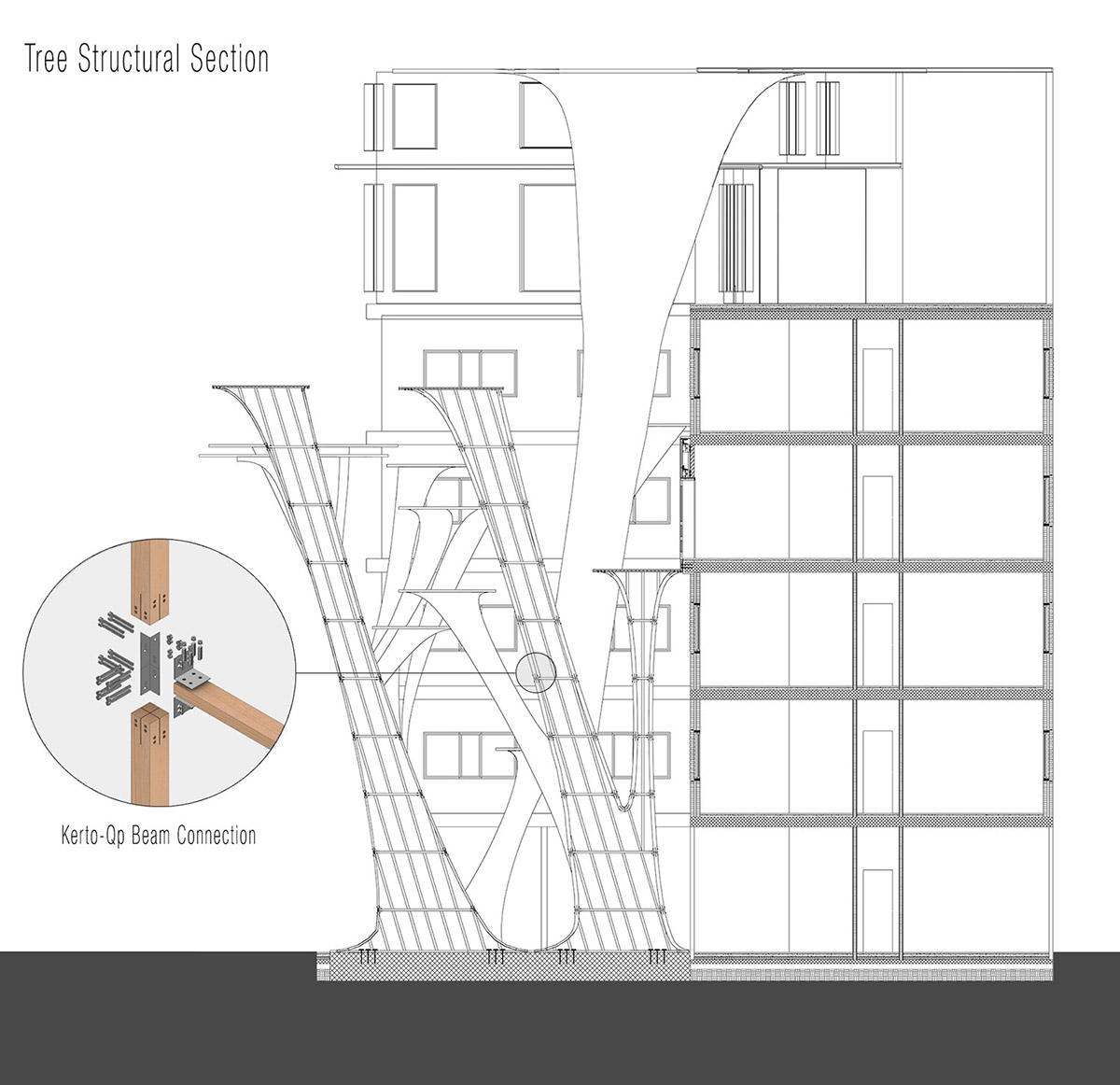 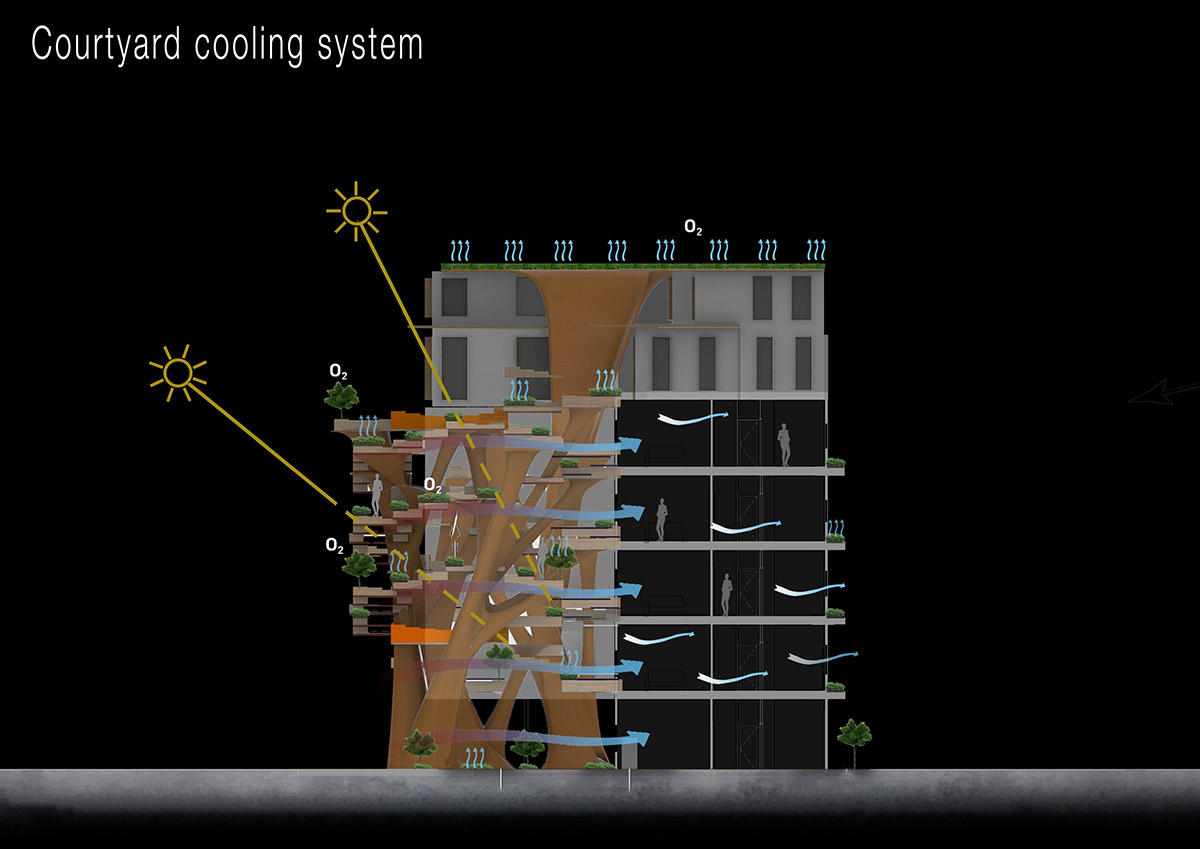 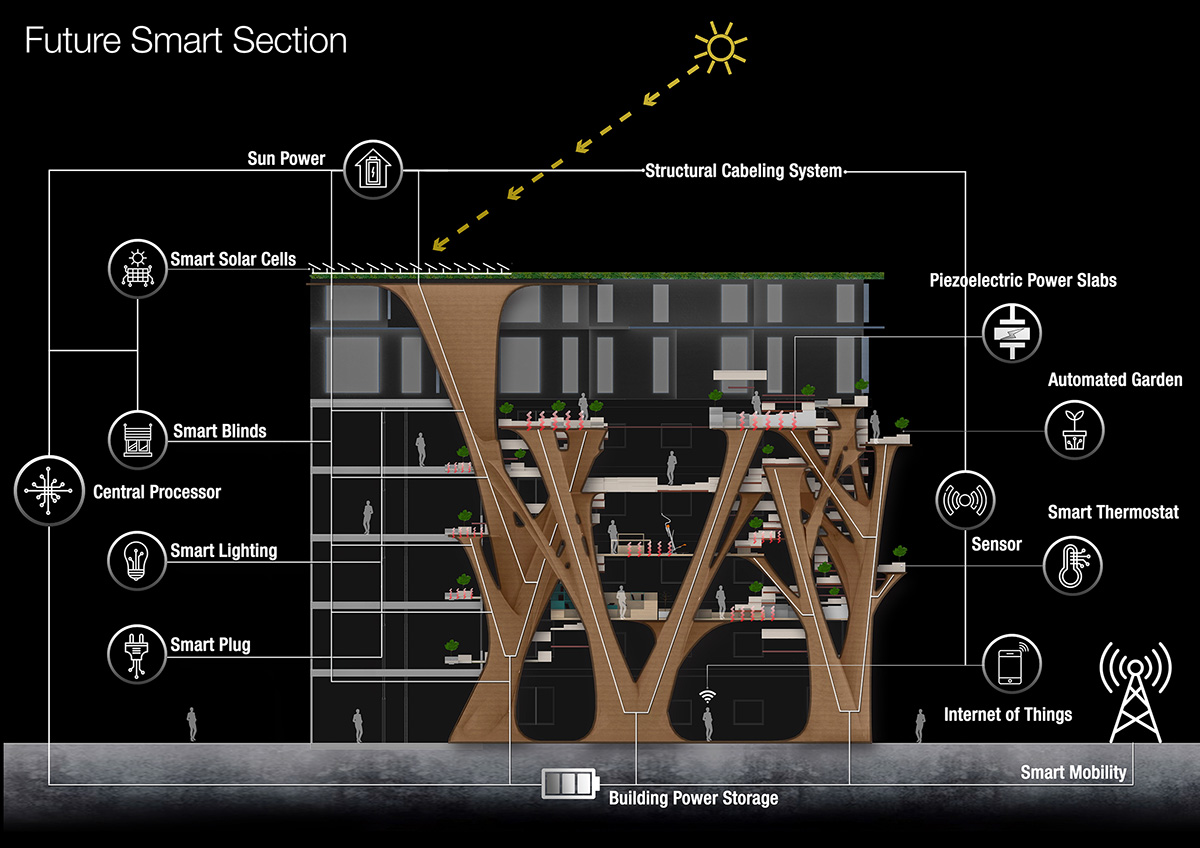 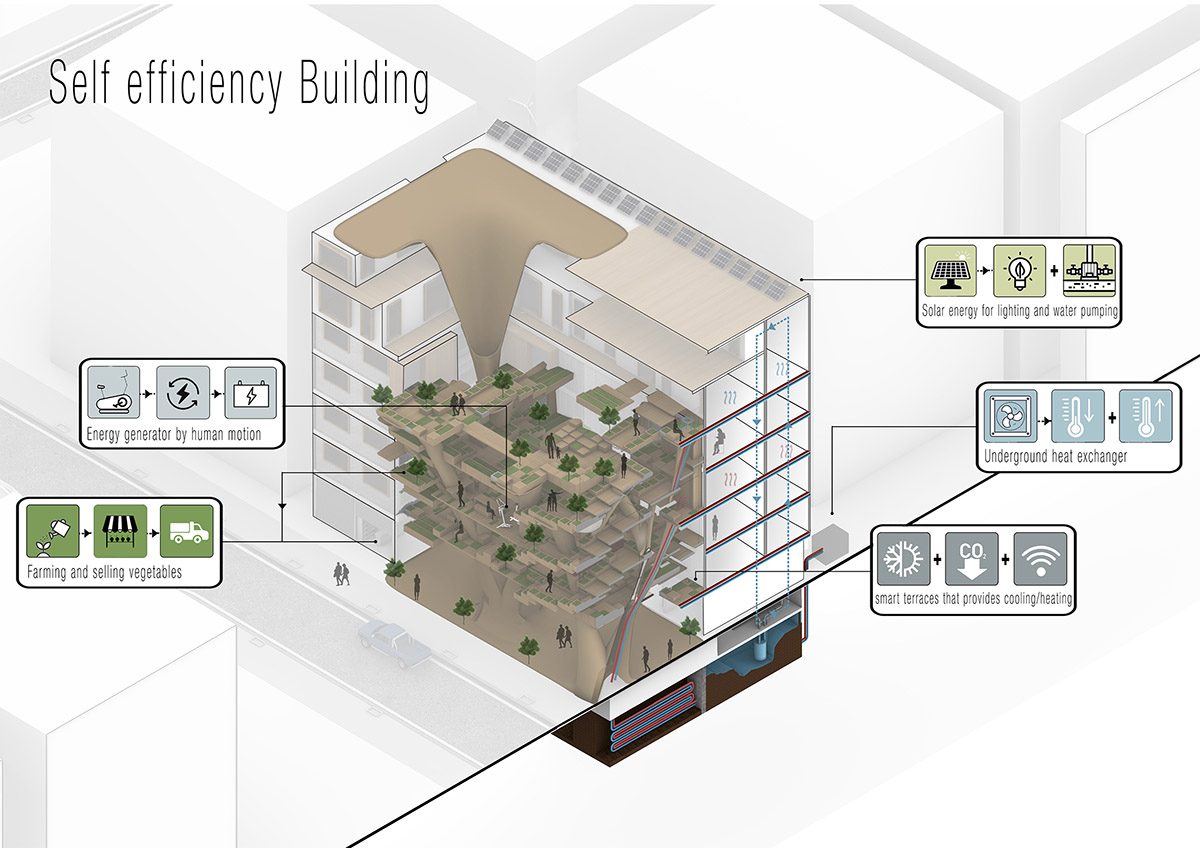 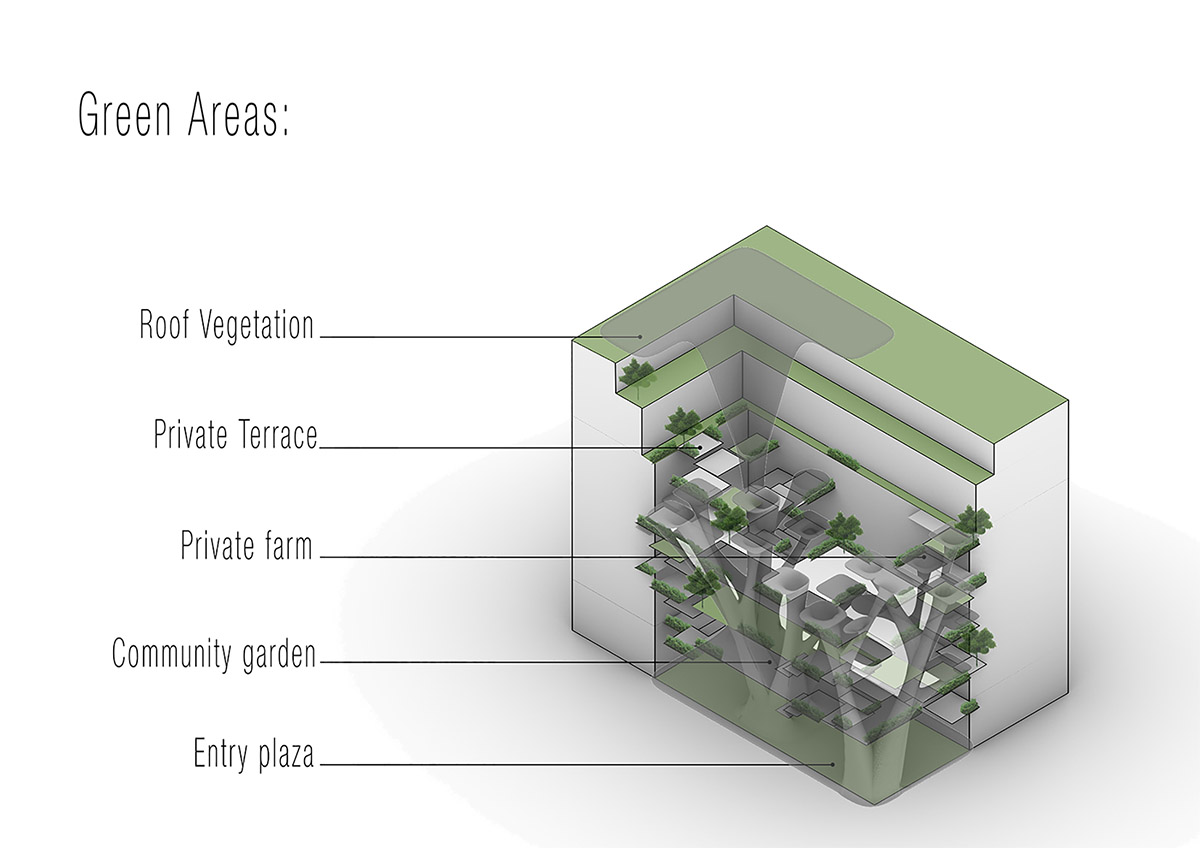 Reparametrize Studio is a young diverse group of architects, researchers and experts coming from different parts of the world. The studio connected through Universities in Europe where they have been pursuing their higher degrees in Design and Architecture, under the mentorships of late dame Zaha Hadid, Patrik Schumacher and Kazuyo Sejima.