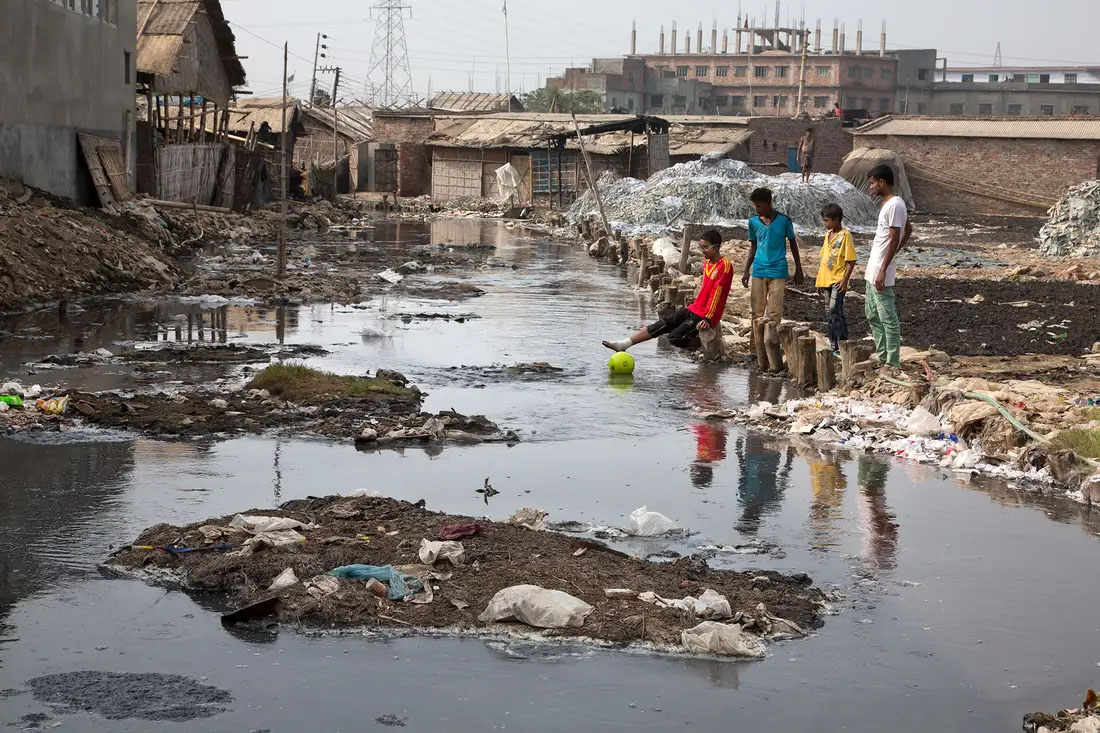 Being the second largest export earner of Bangladesh, with the current value of $1.90 bn, the leather industry is at a threat of collapsing. Due to non-compliance, more and more European and US clients are refraining from business with Bangladesh resulting in the country closing FY18-19 with being 9.27% below the targeted export set by the government (World Footwear, 2019). As the reason lies hugely around the labour exploitation and detrimental environmental effects, the Government is working towards ensuring proper waste treatment plants, more spacious workplace and personal protection equipment against chemical and other health hazards. However, the aspect that plays a vital role in the workers’ lives and health is their accommodation, which is rather less talked about.

Most of the Tannery workers in Bangladesh are living in the slum at Hazaribagh, whether working in the old tannery factories in Hazaribagh or the newly shifted ones in Savar. Some of the workers live in temporary bamboo shelters and some in more permanent shelters made of bricks and corrugated sheets, however, all are exposed to canals and ponds of liquid chemical dumps from the factories. During monsoon, these workers are the most vulnerable as the canals overflow and mix with flood water entering their houses due to the poor drainage system in the area, also shown in Figure 1. 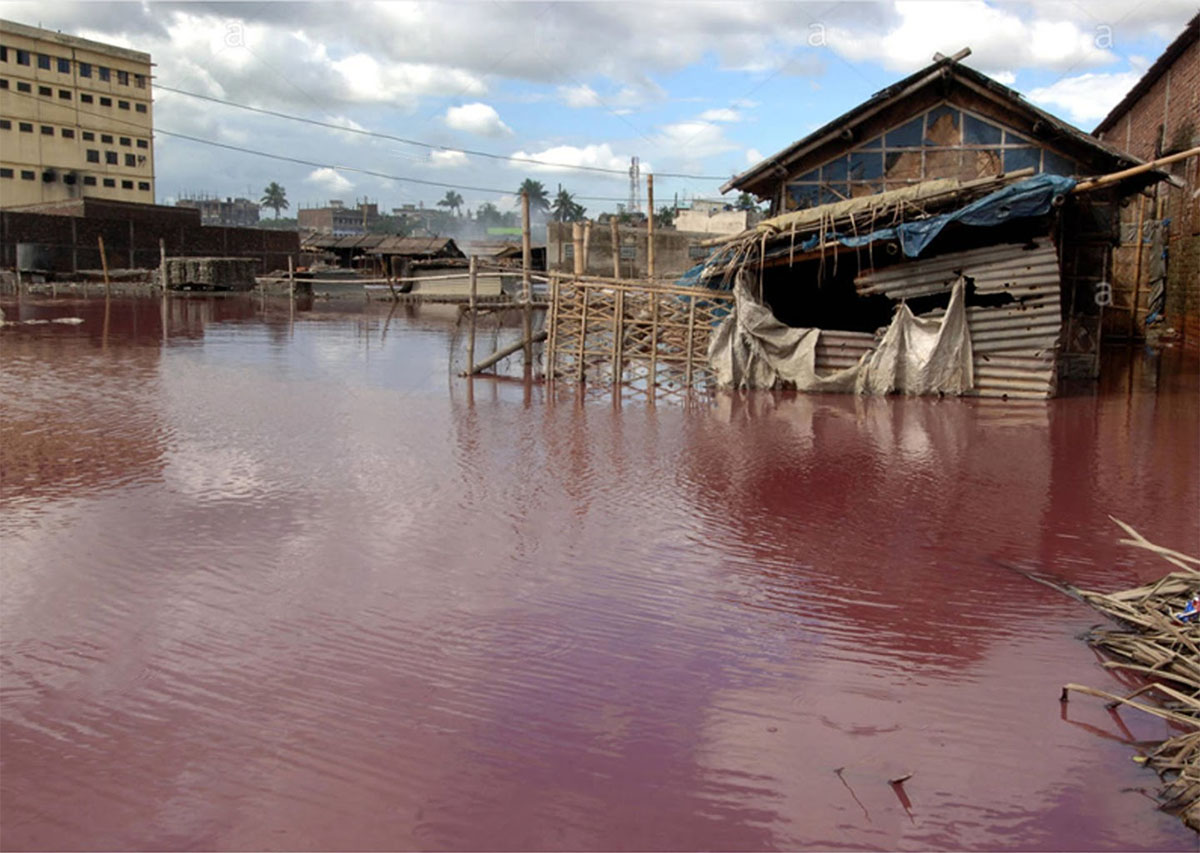 Housing is regarded as a basic human right in the constitution of Bangladesh. It caters to the sense of belonging and security. Good housing is essential for both physical and mental well being. The housing market of Bangladesh, especially its capital, Dhaka has a huge surplus of housing for the upper-income group but faces an immense shortage of affordable housing for the lower-income households.  80% of the lower-income households in Dhaka live in one-roomed homes made of bamboo, straw and bamboo mat. And the cases of the Tannery workers are the same. Densely populated slums of Dhaka, like that of Hazaribagh, are only able to provide a floor area of 1.2m2 per person whereas according to ILO’s standard a minimum of 6.5 m2 is required.

The current metro area of Dhaka, that Hazaribagh falls under, has a population of around 21 million (macrotrends, 2020) which results in high price of land in Dhaka. The land value of residential areas in prime locations of Dhaka range between US$ 321 and $642 per square meters, explained in a paper by Kamruzzaman, M. Eng. and Nobuyuki Ogura.

It is also the reason why lower income households,  who are the majority of the city, are kept virtually out of the land market. The Capital Development Authority body, RAJUK does not sell land smaller than an area of 97.5 m2 which costs US$ 12,600 and would take 20 years for an average poor household, like the tannery workers, with an income of US$ 35.2 to build (Shams, Shohel & Ahsan, 2014). Adding on that, would be the cost of housing. Hence, it is not feasible for 97% of the urban poor like the tannery workers to own land.

There is an inactive role of government when it comes to housing for lower income groups of laborers like the tannery workers in Dhaka. While the government claims to have provided for housing rents through an increased salary, the amount of provision for rent requires great attention to be revised. In 2018, February 27, the government announced the minimum wage for the workers in Grade- 5 to be Tk 12,800 (US $ 151.30) with a provision for Tk. 4,200 (US $ 49.64) for house rent per month (New Age, 2018). However a minimum cost of living in a lowest quality of room is at least Tk. 5000 (US $ 59.64) in Dhaka and it is increasing at a rapid rate. The increase in raise in minimum wage is often followed by increased payments for housing and other services as well leading to the workers being stuck in a loop of disparity (The Daily Star, 2019).  Another option to land for housing for the Tannery workers is through Non- Agricultural Khas Land Settlement Policy which provides land for the landless. While it has the potential to empower the poorest citizens like the tannery workers with land and resources, the lack of transparency in the land, the urban poor get very little access to it. And the government is said to have no interest in implementing it properly (Nahiduzzaman, 2012). The two authoritative figures in charge of building and mananing housing and services in the land of Dhaka- Dhaka City Corporation (DCC) and the Capital Development Authority (RAJUK) have also been inactive in ensuring or developing any laws for land allocation or housing for the Urban Poor communities like the Tannery Workers.

Figure 2: Housing Standards by World Health Organization and the International Labour Organization. Source: Adapted from WHO and ILO websites

Currently the public sector and policies have insignificant contribution to the land and housing market, the existing housing finance system including the banking sector has also not been supportive towards the access to housing loan for the poor. Microfinance institutions like Grameen Bank and BRAC have effectively allocated their resources on pro-poor housing programs, however, due to pressure from donors their work have mostly been limited to rural areas. In 2017, BRAC UDP (Urban Development Programme) launched a low-cost housing initiative for urban slum-dwellers with a cost recovery model where a city development fund is set to provide housing loan and manage community’s funds to provide land tenure security and access to architects and local authority for quality affordable housing (BRAC, 2020). BRAC has also formed a housing fund called “Grihayan Tahabeel” of US$ 1,174,884 for housing project for 2,500 women garments worker in Uttara, Dhaka with 1% interest, repayable in 20 years.  However, such plans for the workers of the second largest exporters are not seen.

Architect Rahat M. Niaz, as a visiting faculty of BRAC University, Architecture department emphasized in a housing studio for lower middle income laborers on the importance of knowing the existing laws and standards. In Bangladesh‘s case, since the country does not properly function laws, the international standards by WHO and ILO as shown in Figure 2 play a big role in providing a housing for the labor market that would create an impressive image in the international market as part of meeting the compliance and hence attracting more international clients. He also further asked to note the workers' background in terms of education, monthly income, daily habits, diseases, furniture they own and use the most to plan for housings by allocating spaces accordingly for minimum cost and maximum facilities.

While there is a range of decision makers involved in the housing for tannery industries, there seems to be inefficiency on most of them and yet not much is talked about it. It is very important to raise the questions of land allocation, affordability, ensuring of basic facilities, investments and roles of both public and private sectors to create a concrete legal framework and strategy for planning housings for these tannery workers.