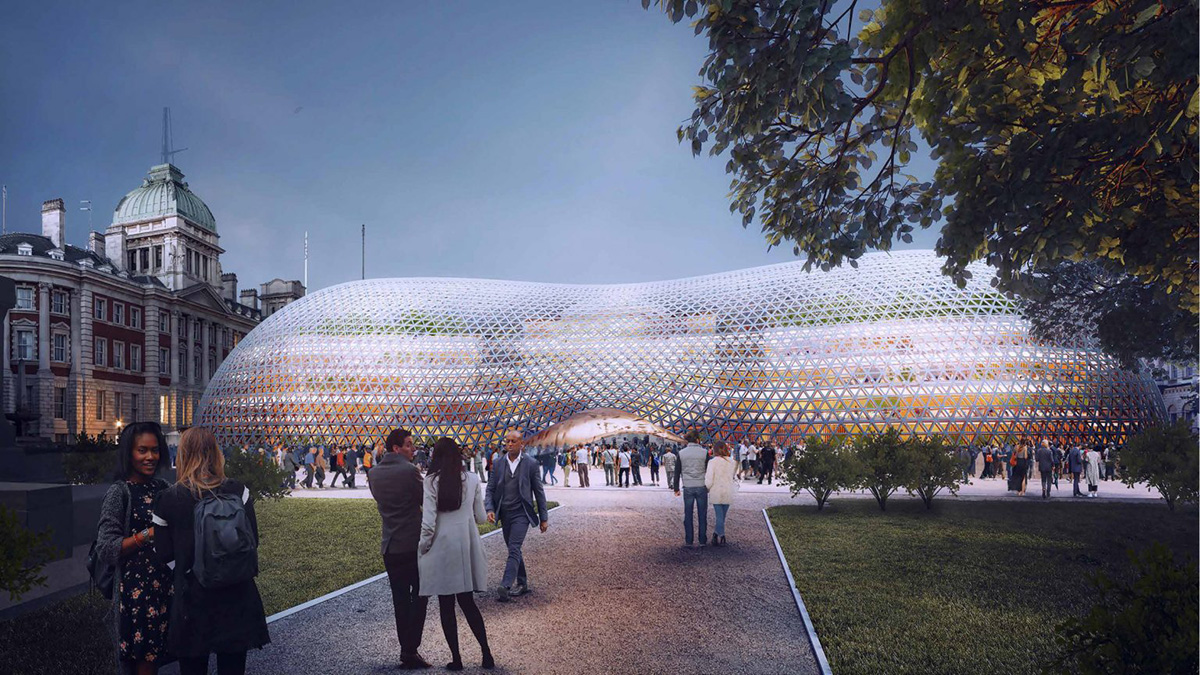 Foster + Partners has revealed design for a transparent, amorphous and glass-clad temporary structure to be used for the new UK parliament in London that would be used while the Palace of Westminster undergoes significant restoration.

Revealed in detail by The Times, the £300 million proposal was created in partnership with property developer John Ritblat and it will contain the exact replicas of the House of Commons, the House of Lords and other significant details in the interior.

The 151-metre-long structure is made of plate glass panels and steel shell with a crystallized outer appearance which is inspired by the Crystal Palace.

The four-story structure will include 650 offices and will be situated on the Horse Guards Parade, adjacent to the existing houses of parliament.

According to The Times' report, Norman Foster could be built in only 28 months which will allow the parliament members relocate earlier than expected. The UK government expects to complete the restoration work for the House of Parliament at least in six years starting from 2025.

The design will save "a huge amount of money" and "is reusable", Foster told The Times. "It showcases what we can produce as a nation," Foster and Ritblat continued. "Everyone regards the relocation of parliament as a huge problem, but it also presents an incredible opportunity and I can't see any downsides to our proposal. Horse Guards is next to 10 and 11 Downing Street and is far more secure than Richmond House."

"We think that, rather than a costly embarrassment, there is the potential here to create a uniquely great British solution that will enable the MPs to decant from the Palace of Westminster more than 36 months earlier," explained Foster and Ritblat.

In January 2020, Prime Minister Boris Johnson announced plans to move the upper chamber of parliament outside of London and in response to Johnson's call, Norman Foster called for a design competition for a new House Of Lords. However, the UK government had already made a decision for the design of a temporary parliament building. Previously, Gensler proposed a floating temporary UK Parliament pod on the River Thames.

"The sustainable solution we propose will not leave any permanent scars on the historic fabric of London and could be reused and relocated anywhere," continued Foster and Ritblat.

"Much like the Great Exhibition did in 1851, we think that this is a great opportunity to celebrate British ingenuity with a solution that captures people's imagination."

The Palace of Westminster was designed by Charles Barry and Augustus Pugin. After demolished fire in 1834, it was rebuilt in 1870. The building stirred a controversy between neoclassical and neogothic styles during that period.

The buildings are currently going a major renovation process in which the Palace of Westminster, a new temporary House of Commons Chamber and associated facilities will be relocated.

Foster + Partners proposed a 151 metre-long bubble to be built on Horse Guards Parade behind Downing Street in 2017. Foster + Partners recently submitted plans to the UK government for a review.