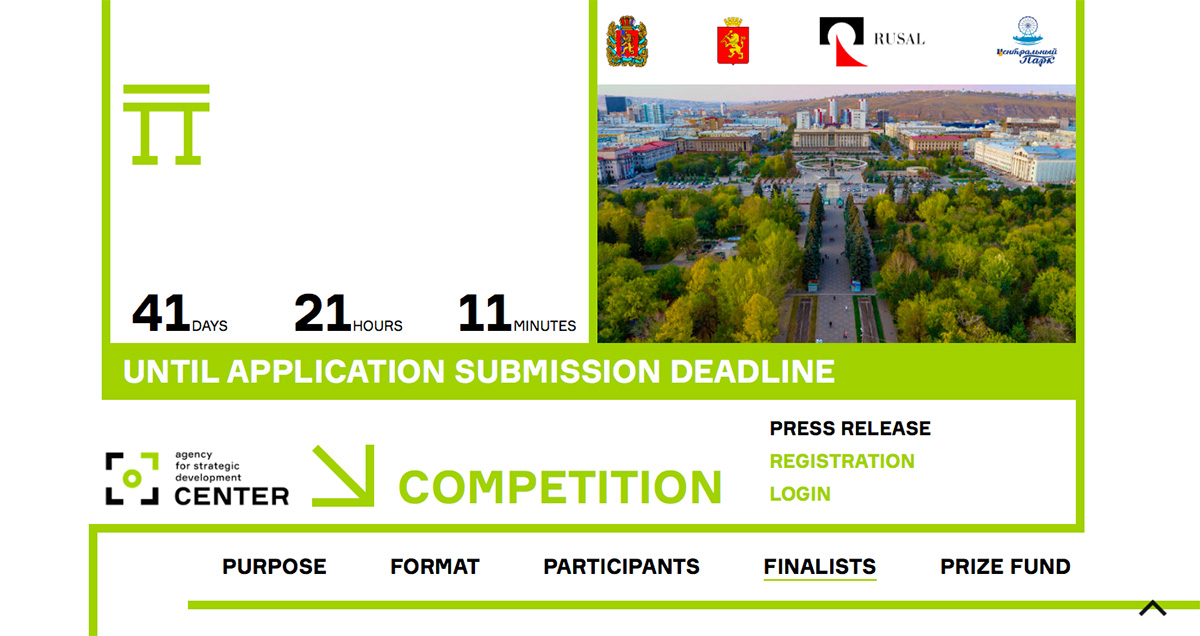 RUSAL (SEHK ‪stock code 486, MOEX stock code RUAL), one of the world’s largest aluminum suppliers, has announced the start of the Open International Competition for Designing a Development Concept for Gorky Central Park in the city of Krasnoyarsk. The prize pool is 6 million rubles.

Application submission is open until September 24 at the competition's website. The competition itself will have two stages and will end on December 15.

During the first stage, the competition’s judging panel, which will include officials from the Krasnoyarsk Region and Krasnoyarsk city administrations and experts on comprehensive territorial development, environmental protection, economics, and spatial planning, will name three finalists.

The finalist selection process will be based on an in-depth evaluation of the applications submitted via competition website, as well as a portfolio of completed projects and an essay with a description of the key ideas that will lay the groundwork for the future concept. Each team that makes it to the final stage will receive 900,000 rubles.

The competition will be open to Russian and foreign professional organizations in the field of the integrated development of territories and urban planning, architecture, design, elaboration of concepts for the development of public spaces, and master planning, provided that they operate in Russia.

The renovation of Gorky Central Park in Krasnoyarsk is to be one of several large-scale integrated public space development initiatives that RUSAL is supporting in the cities where it has a presence. Aside from the general construction of children’s playgrounds and public green spaces around residential buildings, the company is also investing in the renovation of symbolic destinations in each city. These include: Surikov Memorial Square, Revolution Square, and the Historical Quarter in Krasnoyarsk; Victory Park and Metallurgov Square in Achinsk; and Metallurgov Park in Bratsk.

In addition, in early 2020, the company unveiled the 11 projects that won the RUSAL Territory anniversary competition and are aimed at shaping a new, comfortable urban environment.

"Central Park is a very special part of Krasnoyarsk’s infrastructure; at one point, it was considered one of the best parks in Siberia. We are confident that the insight from the best experts on urban spatial development, coupled with RUSAL’s support, will allow this place to reclaim the love it once had both among the people of Krasnoyarsk and visitors to the city," said Elena Bezdenezhnykh, RUSAL vice president for regional policy and government cooperation.

"Gorky Central Park is surrounded by various satellite spaces that have already been transformed with RUSAL’s support. They are Revolution Square, Surikov Memorial Square, and the Historical Quarter, where renovations are still ongoing. A new, modern look for the central park, which is the dominant feature of this entire area, has been an ardent dream for everyone who lives in Krasnoyarsk. Upon reconstruction, it is bound to be an urban space with a whole new level of development. Our goal is to make the park an example to follow,” noted Sergei Eremin, Mayor of Krasnoyarsk, “I would like to give a most heartfelt thanks to our partners—the RUSAL company and, of course, Governor Aleksandr Viktorovich Uss, whose support has been invaluable to the project."

"I wholeheartedly believe that such a large-scale international competition will breathe new life into this park, which is among the richest in the history of all Siberia. This event will boost the long-term development of not just the park itself, but the whole city as well, transforming it into an even more comfortable living space and tourist destination. We all hope that the competition in Krasnoyarsk will highlight the best practices in global territorial development," said Sergei Georgievskii, CEO of the Agency for Strategic Development CENTER and Head of the Organizing Committee.

Peter Verdyck, Director of the Provincial Parks of the Antwerp Region, Belgium, International Curator of the Competition

Evgeniya Murinets, Director of Urban Policy Institute, Advisor to the President of the Union of Architects of Russia