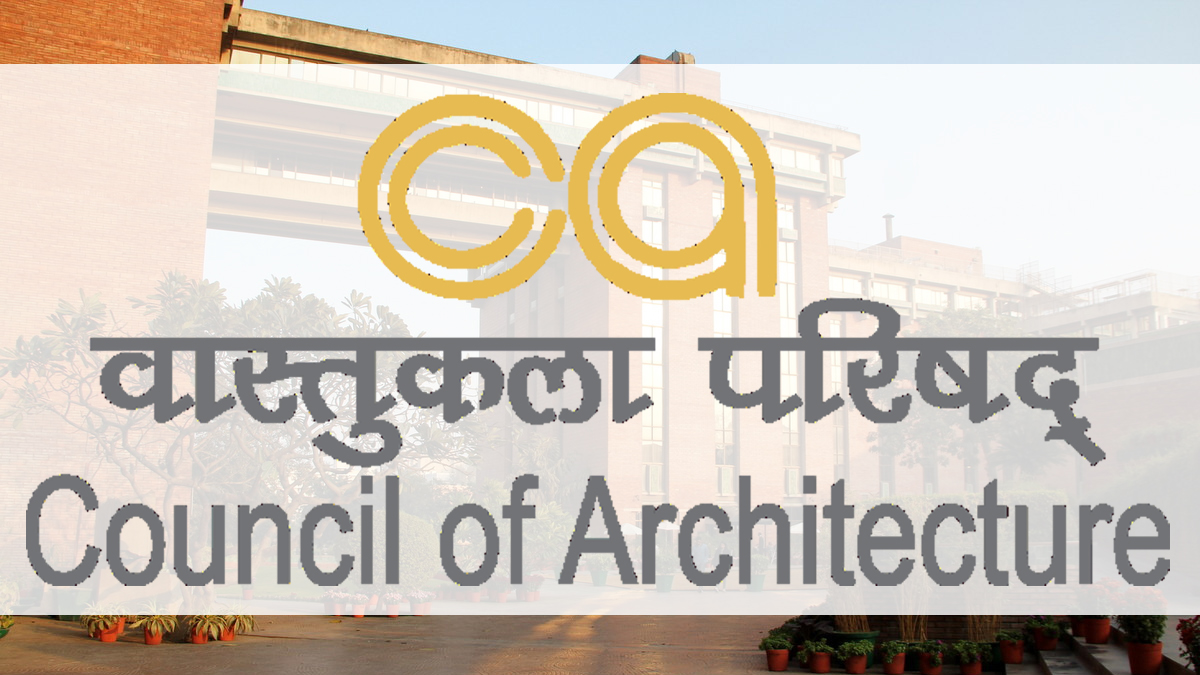 The Architects Act, 1972 India was brought into action to designate the registration of Architects and formulate an assigning body for the same, termed as the Council of Architecture. In the last 50 years, numerous incidents and requirements of the architects' fraternity has led to the proposition of a few amendments to this law, namely in 2010 and then in 2018 as ‘Architects Amendment Bill’.  However, most of these have been disapproved by the Government as it did not seek to look after ‘the greater good of the society’.

The recent Supreme Court judgment, ruled on 17th March 2020, negated the need of a professional degree for the practice of Architectural Activities; thus provoking a new stream of thought for Architectural Professionals all around the country. Therefore, on the 18th May, 2020 the Council of Architecture at 5 p.m. IST, held a webinar (via Zoom) to discuss stipulated amendments to the archaic Architects law; with professionals from all across the nation.

Along with the President of COA, Ar. Habeeb Khan; the primary panel also included the Vice President – Ar. Sapna, Executive Member of the Council – Ar. Kapil Sethia, IIA (Indian Institute of Architects) President – Ar. Divya Kush, Council Member – Ar. Amogh Gupta and eminent practicing architects - Ar. Sandeep Shikre and Ar. Salil Ranadive. Moderated by Ar. Rakesh Singh Kushwah – a member of the council, the panel foremostly made it clear that the rising number of Architects and the need of the profession make it inevitable to suggest this amendment. Additionally, as stated by Ar. Kapil Sethia that the 1972 Act, did not aim to protect the practice of Architecture rather only the title of an Architect. Considering the current scenario, the council presented four major amendments to the present Act, further subdivided into numerous sections and subsections.

If an Architect had a nickel for every time they have been asked the difference between Architecture and Civil Engineering, most of us would definitely be millionaires! Thus, it came as no surprise and quite the need of the hour to finally define the services that are deemed to be provided by someone bearing the title of an Architect. The original law and the amendment suggested have been mentioned in the image below. 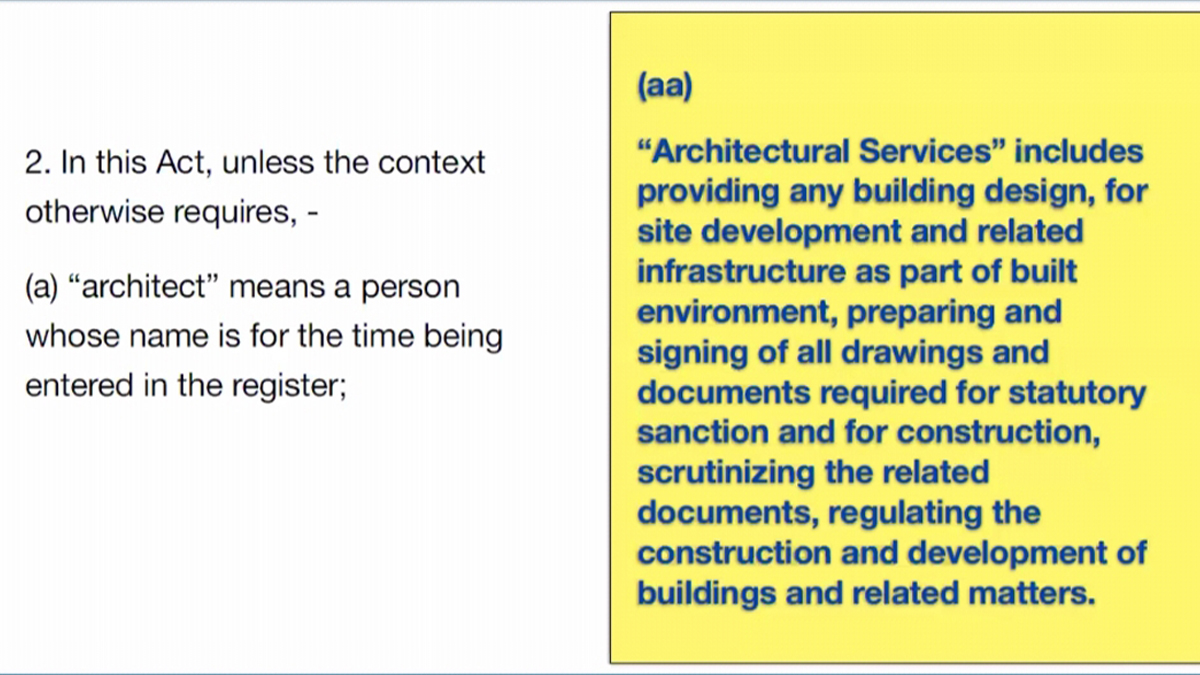 The original statement  (left) to the suggested change (on right)

Ar. Sandeep Shikre along with the other panelists agreed to this initiative and added that the definition should not be of static nature, rather have a dynamic approach. It should be such that it can also cater to professionals at least, 20 to 25 years from now. The principal architect of SSA also suggested that keeping in mind the shelf life of any alterations brought to action today, the power of imposing such changes should always lie with the COA, such that the fate of Architecture in the society may be decided by a group of architects alone and not by any other designated professional.

In order to be representable on Global platforms, the next segment of amendments is to be directed towards seeking permission for the creation of Limited Liability Partnership Companies (LLP) along with the stated Studio and Consultancy Frameworks. This will aid, as the members unanimously agreed, to improve the standard of practices in our country and finer discretion during the assortment of large Government Projects. 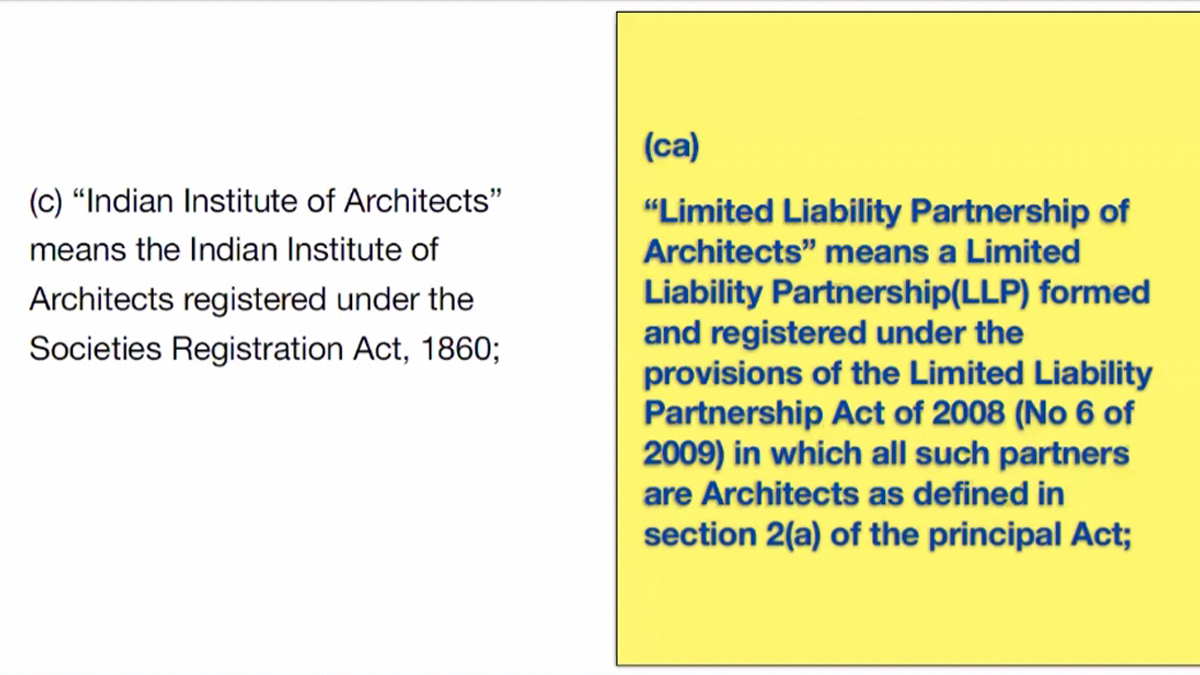 Inclusion of LLP  Companies as a part of the original law (right), so as to have Indian Architectural Companies on the Global Map

Quoting the recent ‘Vocal for Local’ ideology of our Prime Minister, Shri Narendra Modi, Ar. Habeeb Khan explained that in order for the Architectural services to be localized their up-gradation in terms of the framework is mandatory.

Elevating the Standard of Education

This amendment is proposed to be achieved with the provision of quite a few divergent ideas and principles. Firstly, it aims to provide a substantial amount of importance to the Post Graduate and Research degrees of Architecture, contrary to the present where only Bachelors is under the limelight. 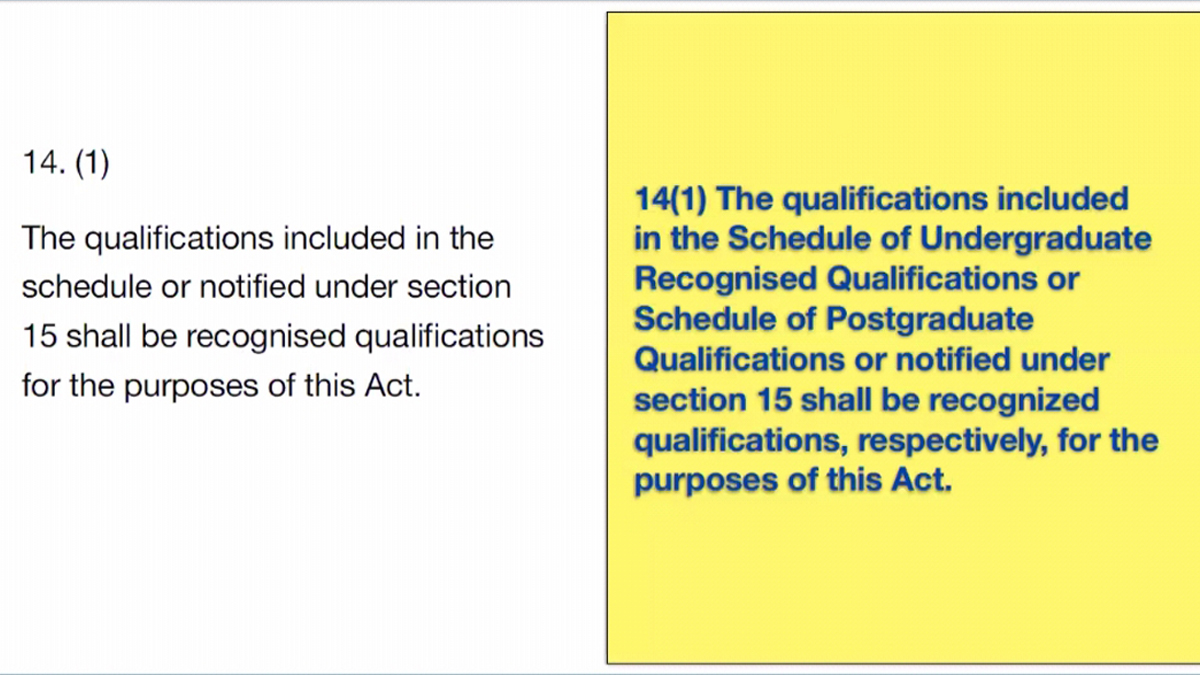 Amendments to Section 14 of the Law, to provide further emphasis of PG Courses and Research of Architecture 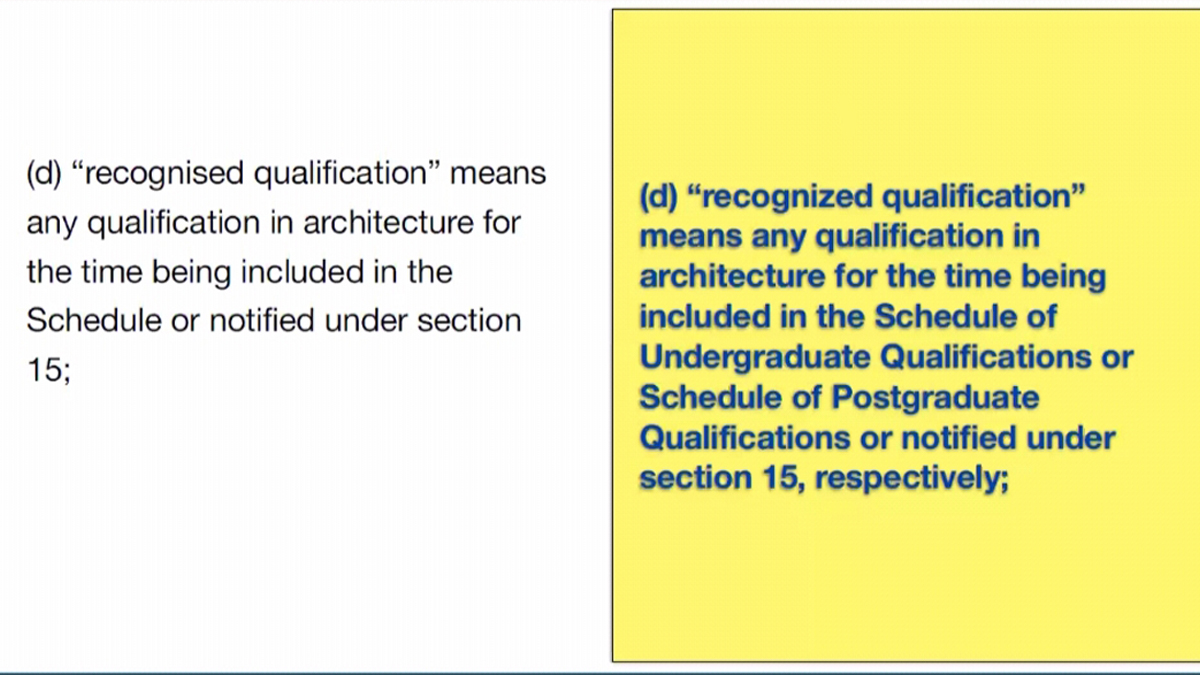 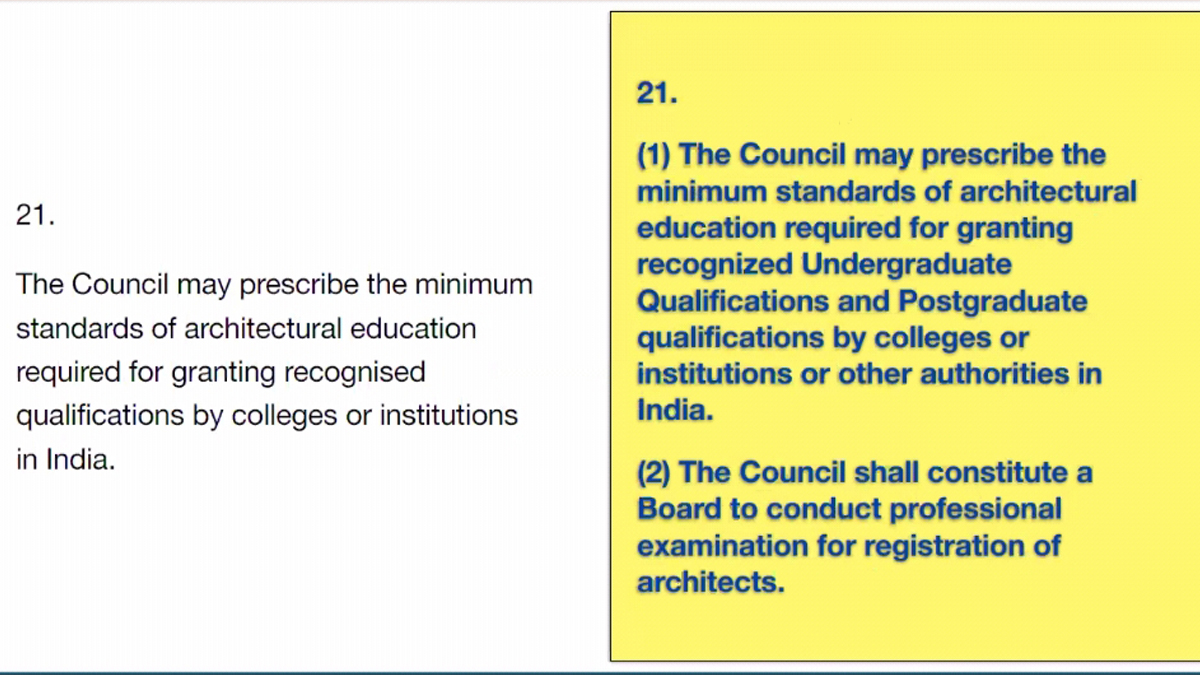 Further defining the standards of Architectural Education in India (right) 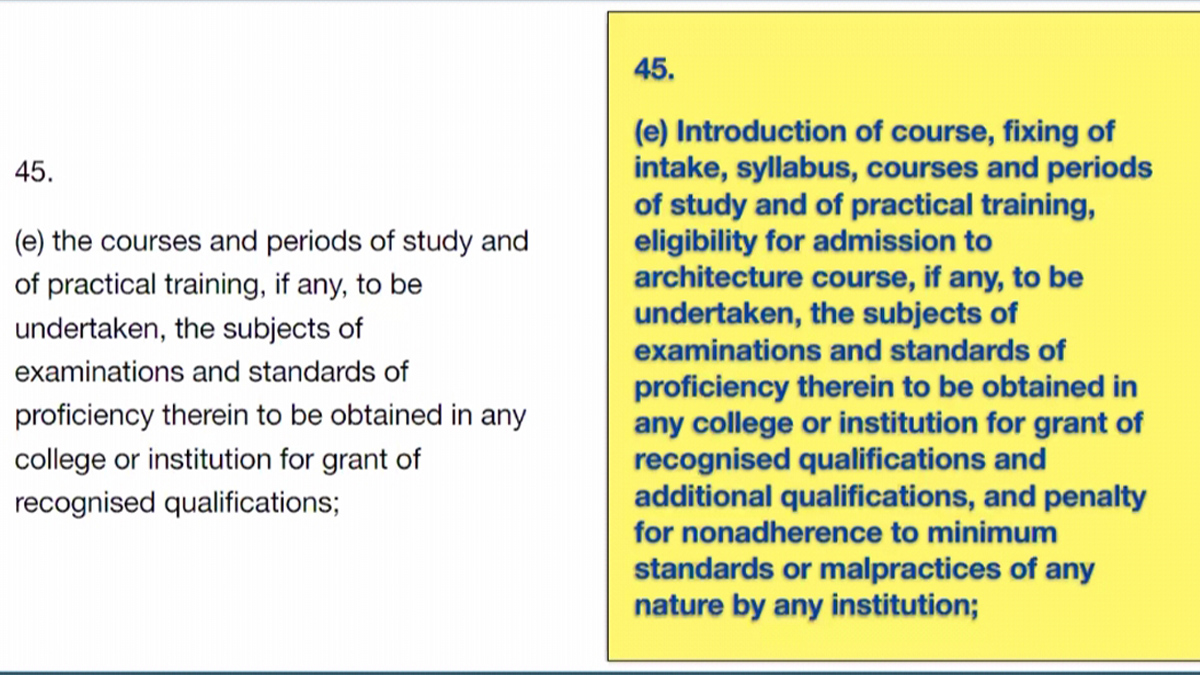 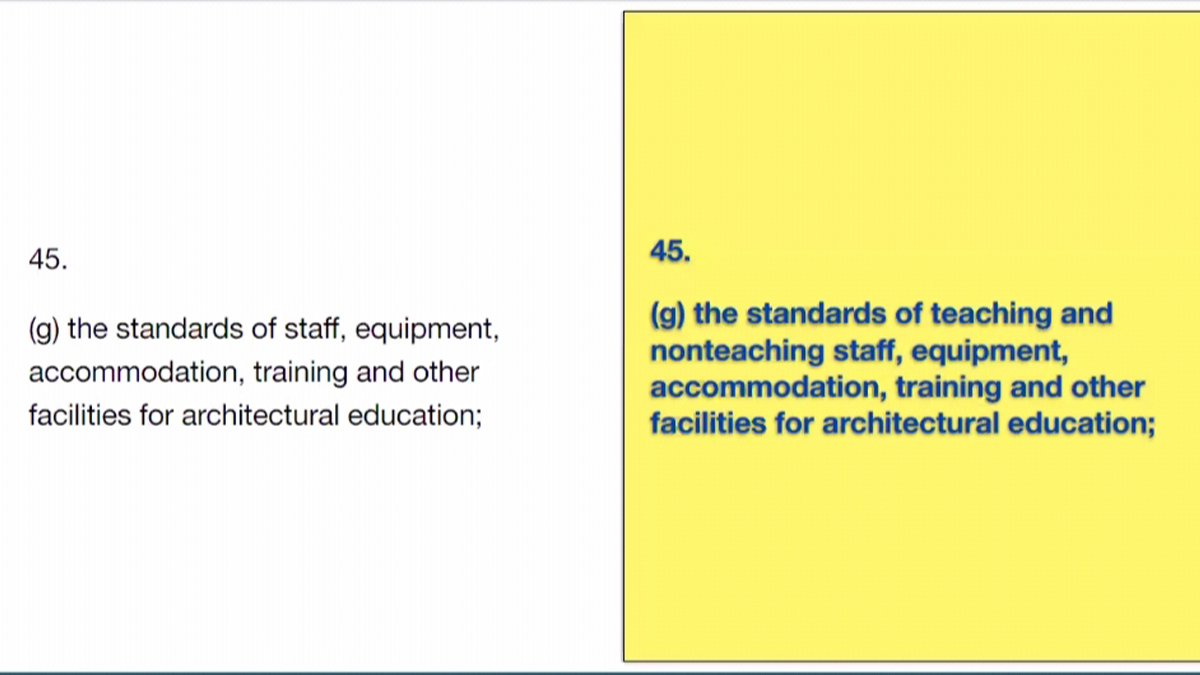 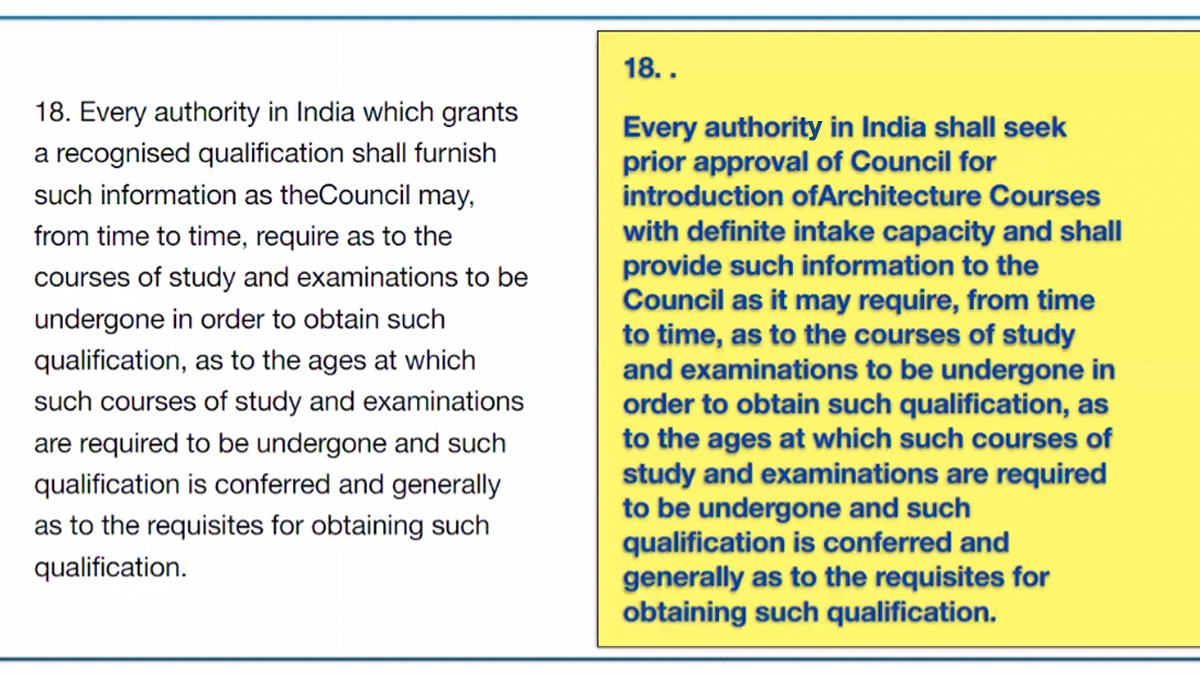 The Council is set to suggest the inclusion of a final examination for graduates, in order to obtain their licenses to practice nationally. Needless to say, this was one of the most disputed topics to be discussed within the panel, and also with the 1500 viewers from the Architectural Community.  While the President of the Council clearly stated that this was the only way to regulate the quality of the profession, Ar. Amogh Gupta suggested that such an exam should be answered not only by young graduates but also by practicing architects, for the renewal of their licenses. Most of the panelists were united on the idea of structuring the Bachelor of Architecture into a 4-year course plus a whole year of internship and finally the exit examination, but Ar. Divya Kush was quick to point out that the 5-year course paradigm is an internationally accepted model and should not be hindered with. However, he was not against the idea of a scrutinizing exit exam for recent architects.

Largely, the amendment does seem to be a step in the right direction, as it at least endeavored to be a matter of public discussion rather than being a closed-door idea. Nonetheless, having said so, after achieving clarity on the vision of the Council that they aim to achieve through these proposed amendments; one cannot help but ponder upon the implementations of the same. For instance, will the increase of LLP Companies dissolve the creative Studio environment after all? Will Architectural practice, too end up being a mere element in the commercial mob? Will the portal of exit exam be any different than the endless semester examinations faced by graduates? Will they be successful in creating a format of exams that challenge the practical knowledge rather than being a ‘mug-fete’ again? Such and many more countless questions that are clogging the heads of every national Architect, can only be answered once the ‘Regulations’ segment of this amendment is brought to focus, as settled by Ar. Kapil Sethia during the course of the Webinar.

Permutations and combinations are still in the go as the final suggestions by IIA and other authorities are being compiled by the Council, to create one final proposal that shall be further pushed for legislative action. As said by Ar. Amogh Gupte and Ar. Salil Ranadive that, the final goal is to present an objective that solves the issues faced by an Architect and at the same time respects all other professions related to Building Construction.

All other Images © Council of Architecture