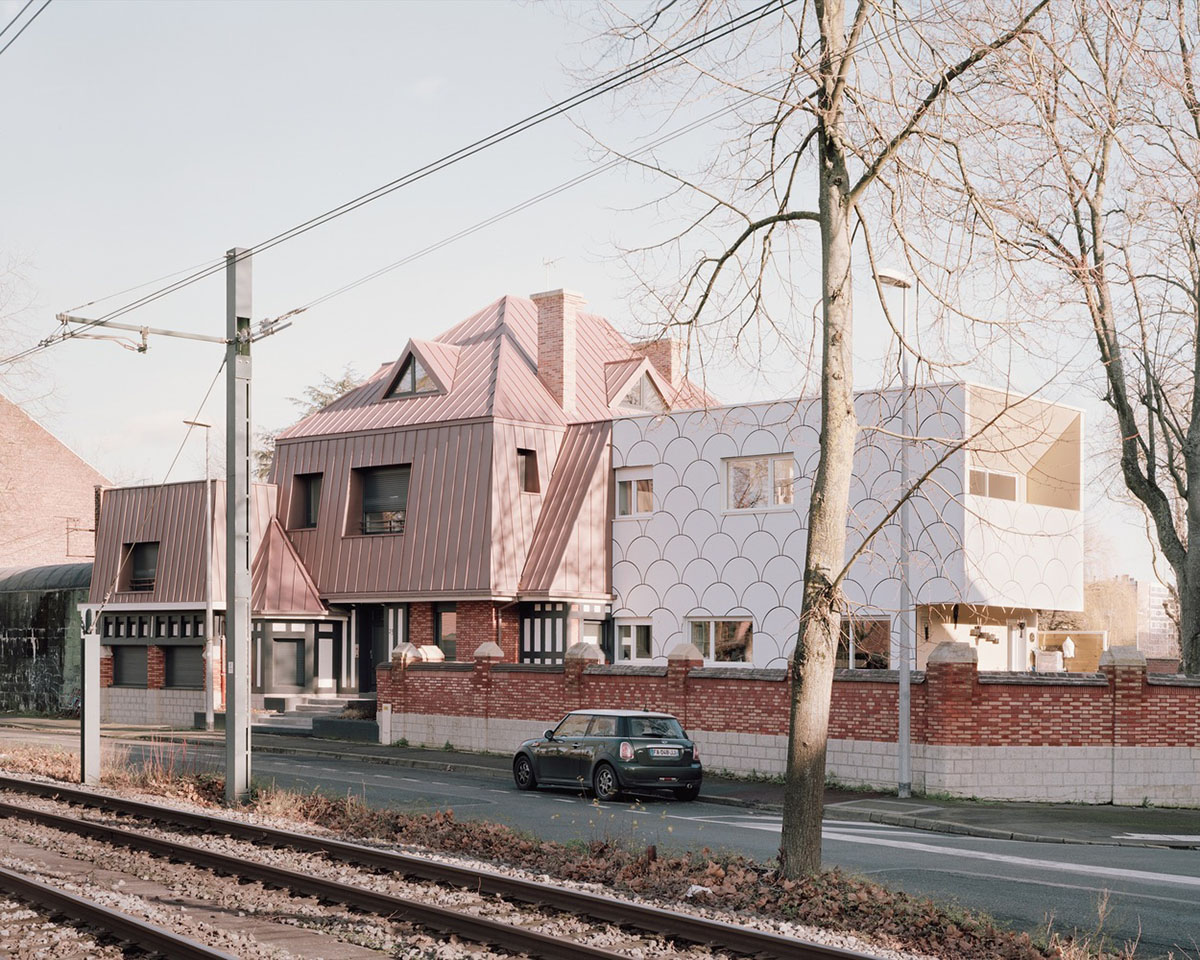 A social housing has been reimagined in pinkish tones and new material attributes in French city of Tourcoing, bringing the city a new aesthetic and becoming a new landmark of the city fabric.

Designed by French architecture firm D'HOUNDT+BAJART Architectes & associés, the project was transformed from an old building which was originally built in the 1930s in the city.

Named Villa Maillard, the project's aim was to renovate and expand a neglected building for a long time, with new social housing units in the heart of a splendid garden. 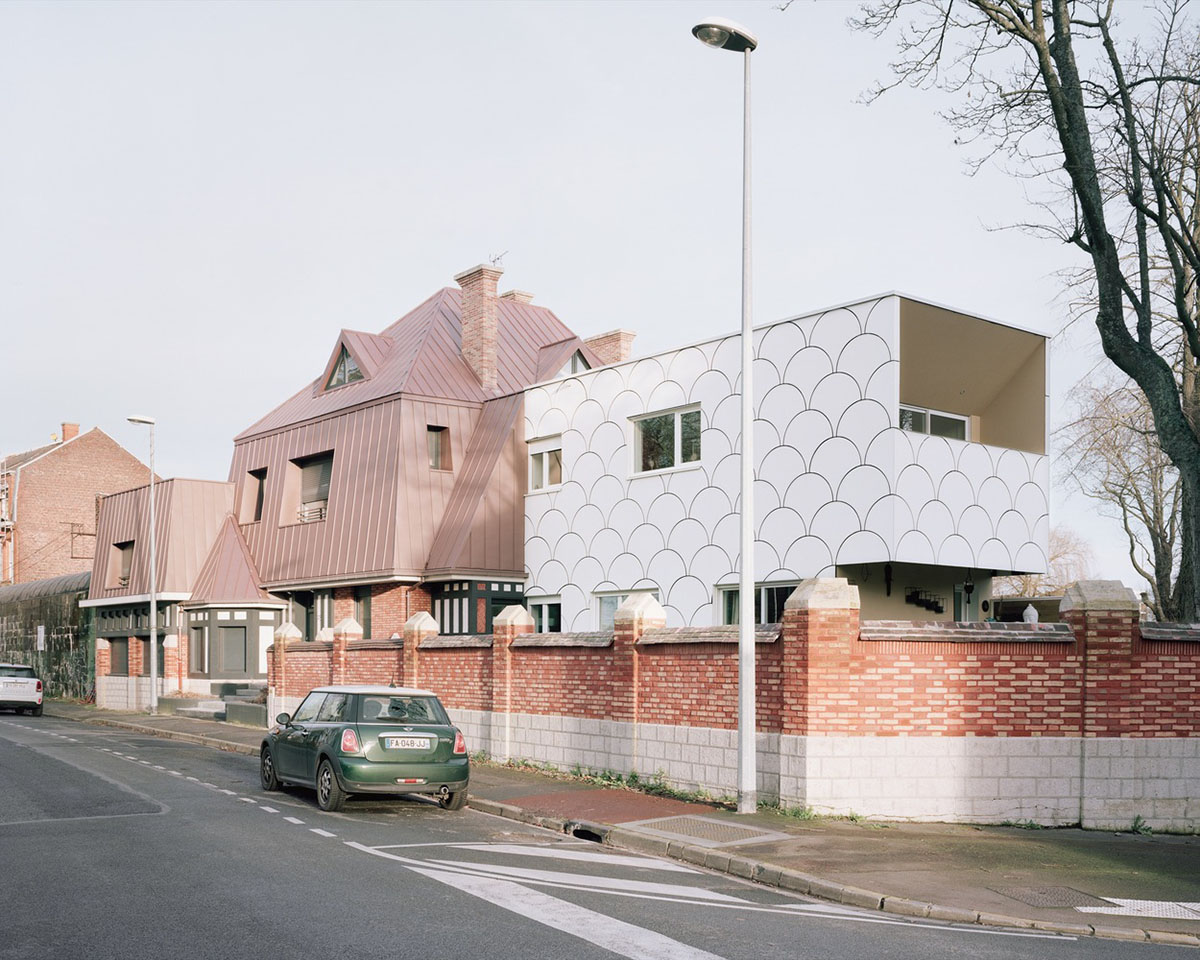 Located on Avenue de la Marne heading into the city of Tourcoing, the project is comprised of two volumes, one of its original building and the other is the new expansion attached to the original one. The new building now accommodates eight social housing units. "A tribute to architectural artistry. Today regarded as a historical building by the very detractors project who wanted to leave it unchanged, the Anglo-Norman style villa was already an eccentric piece when it was built in the 1930's," said the firm.

"Reminiscent of a getaway destination, a faraway sea resort, it fits perfectly with the history of the boulevard where rich Greater Lille industrial families used to compete in extravagance."

"The transformation of the Villa Maillard is in tune with the spirit of the time marked by the construction of qualitative and fanciful houses," added the studio. 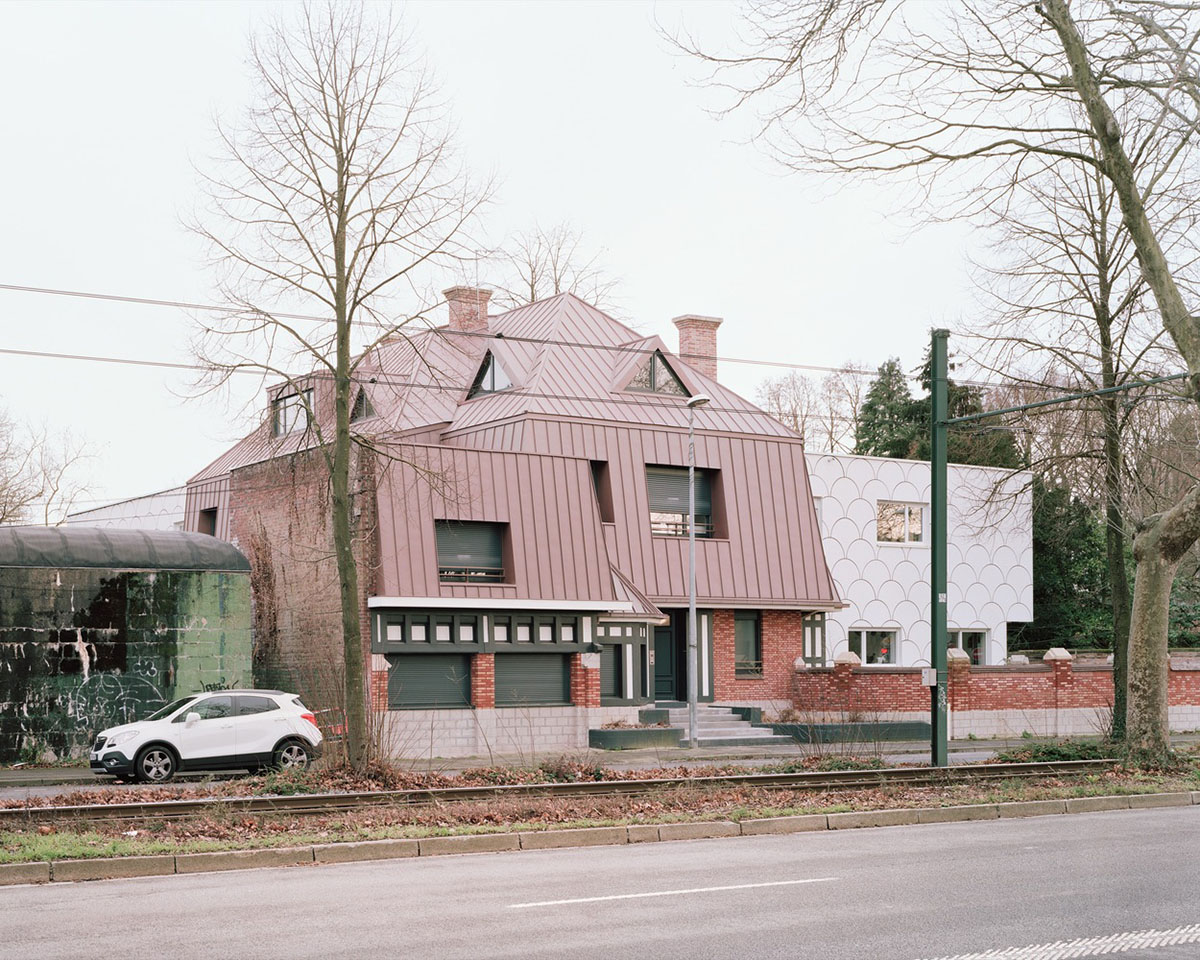 The architects follow "know-how, rethink and develop" strategy in the project. In the renovation process, the architects paid great attention to architectural details such as the stud work where the timber framing is filled with sloping bricks. 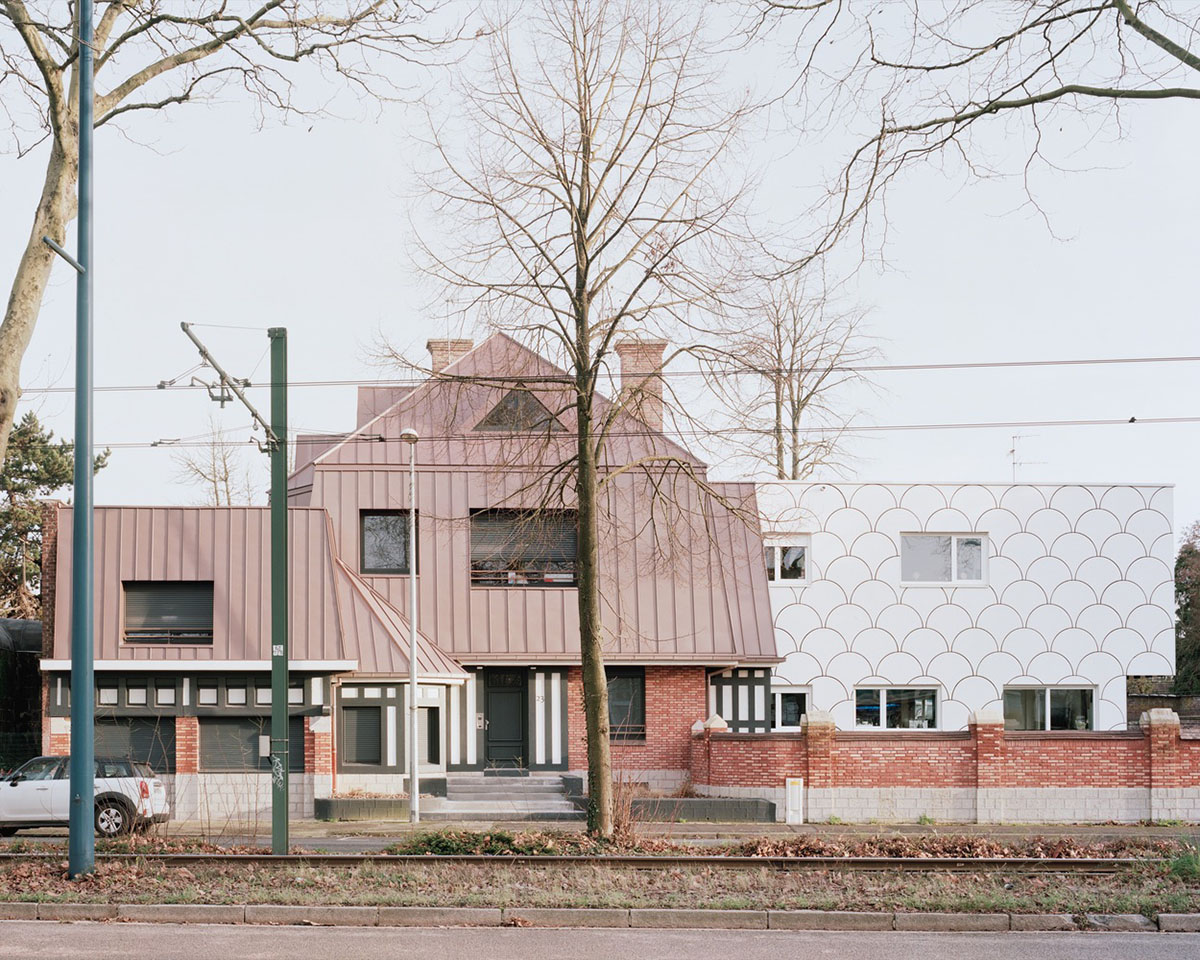 The have recreated the roof's tangled volumes as they were originally with a traditional frame which required great craftsmanship. The condition of the frame making it impossible to raise the structure, artisans had to redesign the volumes and imagine their assembly from the ground up.

The silhouette of the house has been enhanced by a pre-weathered brownish red zinc lining perfectly adapting to the shape of the frame and covering the house all the way down to the ground floor. 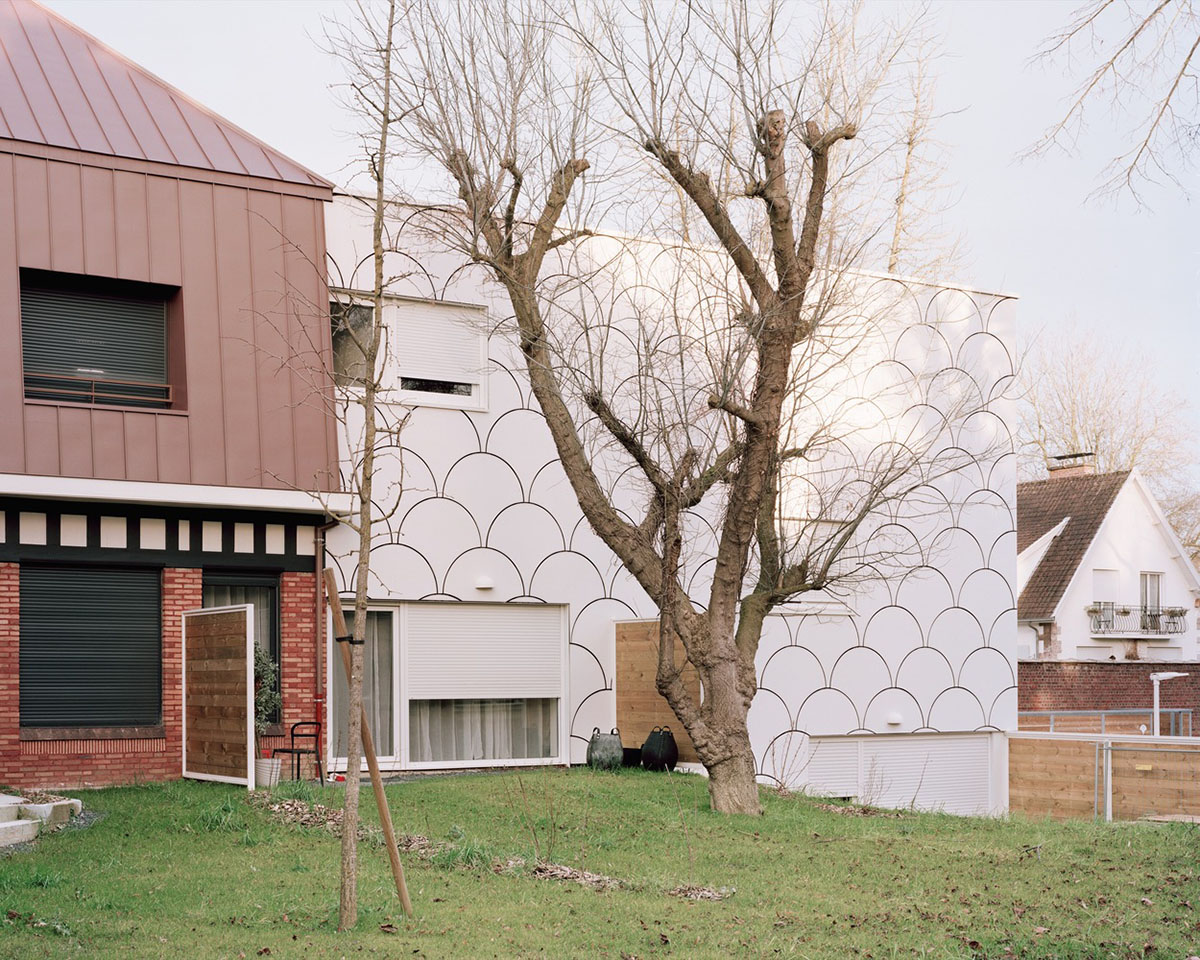 The colours have been renewed with the historical building's chromatic tones and create a sharp contrast with the newly built extensions. Those light wood framed extensions are built where the old bow windows used to be, as if branches  naturally sprang out of the frame. The plant-inspired envelope hosts a tree-house style loggia on the first floor. "Subject to image requirements at the town entrance, this program offers its residents an outstanding living environment in a somewhat gentrified neighbourhood," added the firm.

"The housing units are bright with unconventional volumes, the common portions are neatly designed and the private gardens match the expectations of one of France's greatest tree-lined avenues." For the exterior of the house, the architects are inspired by "a ginkgo biloba tree" to give the sense of this look. "Beyond its architecture, another great feature of the Villa Maillard lies in its park planted with remarkable specimens and especially a ginkgo biloba tree." 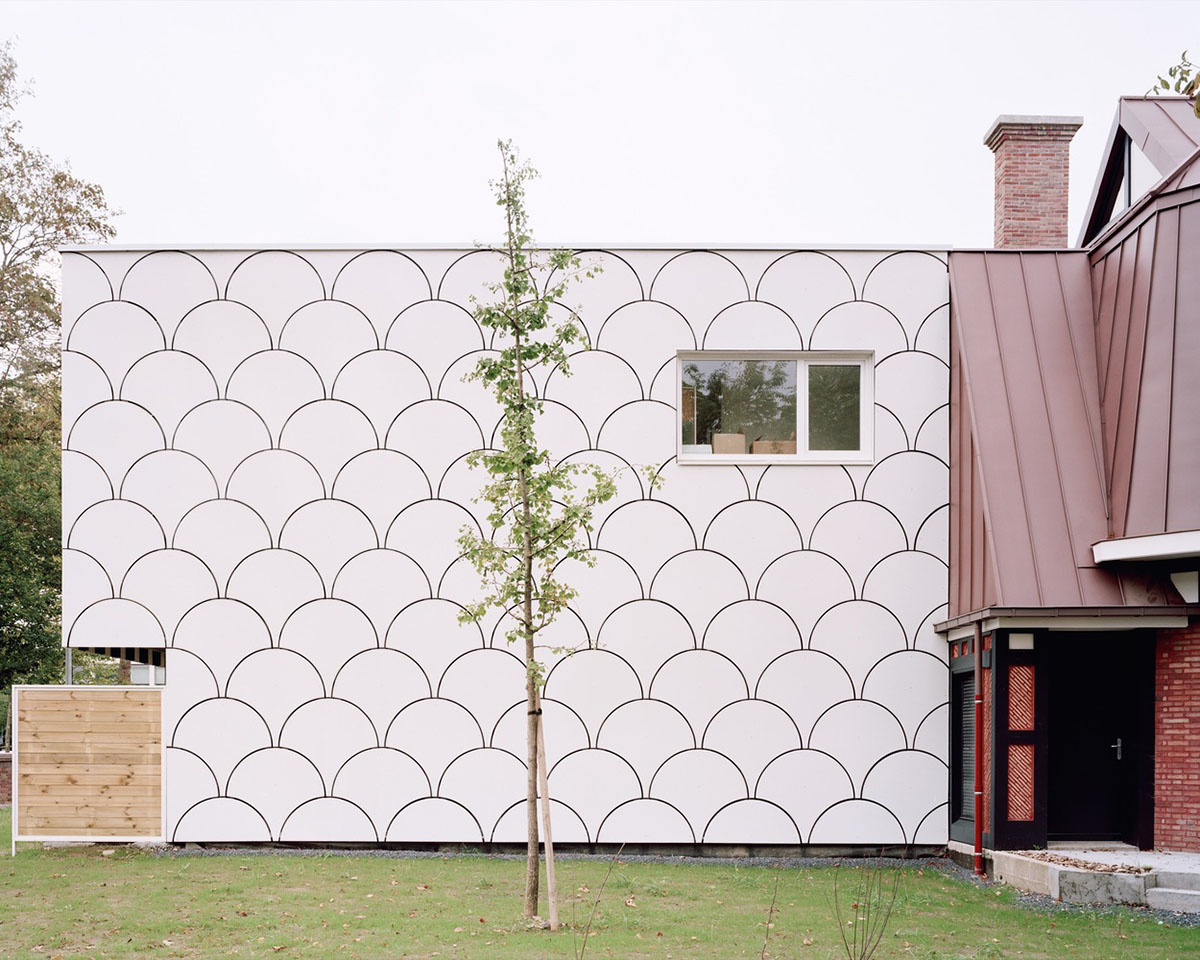 Those trees are listed as part of the local heritage while the house is not and have therefore protected it from more ambitious real estate projects which would have required to cut them down. As a tribute to this natural heritage, the extensions are lined with stylish ginkgo leaves. 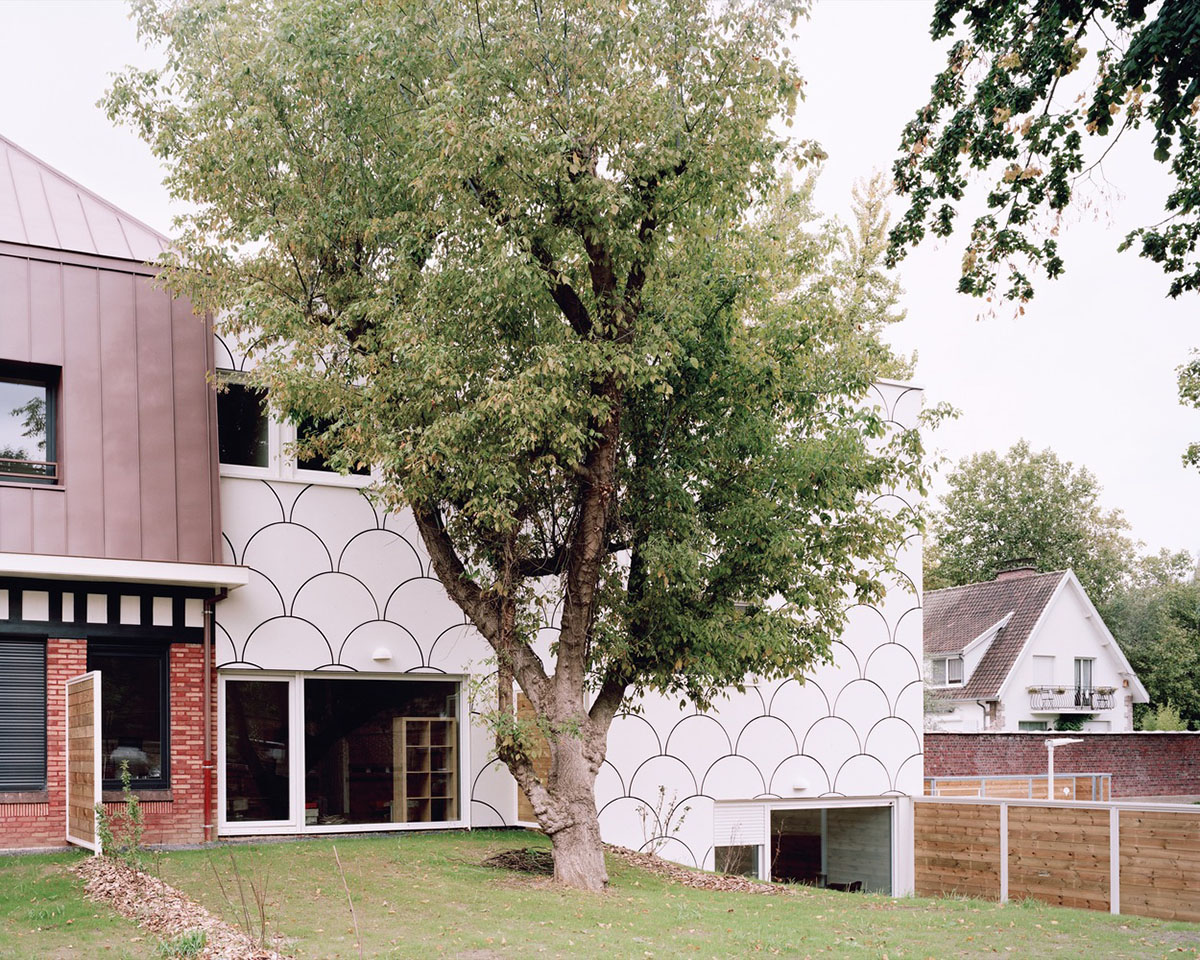 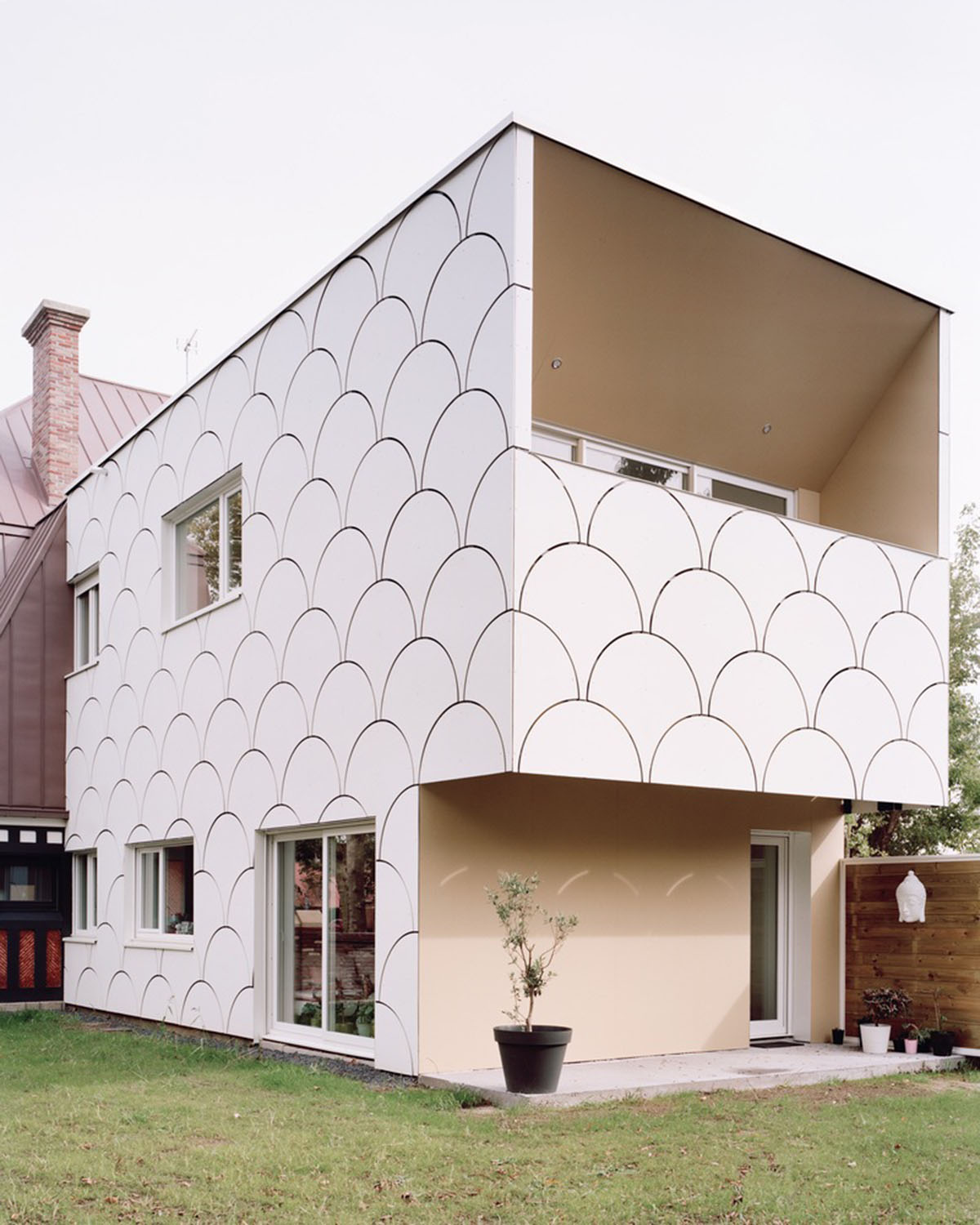 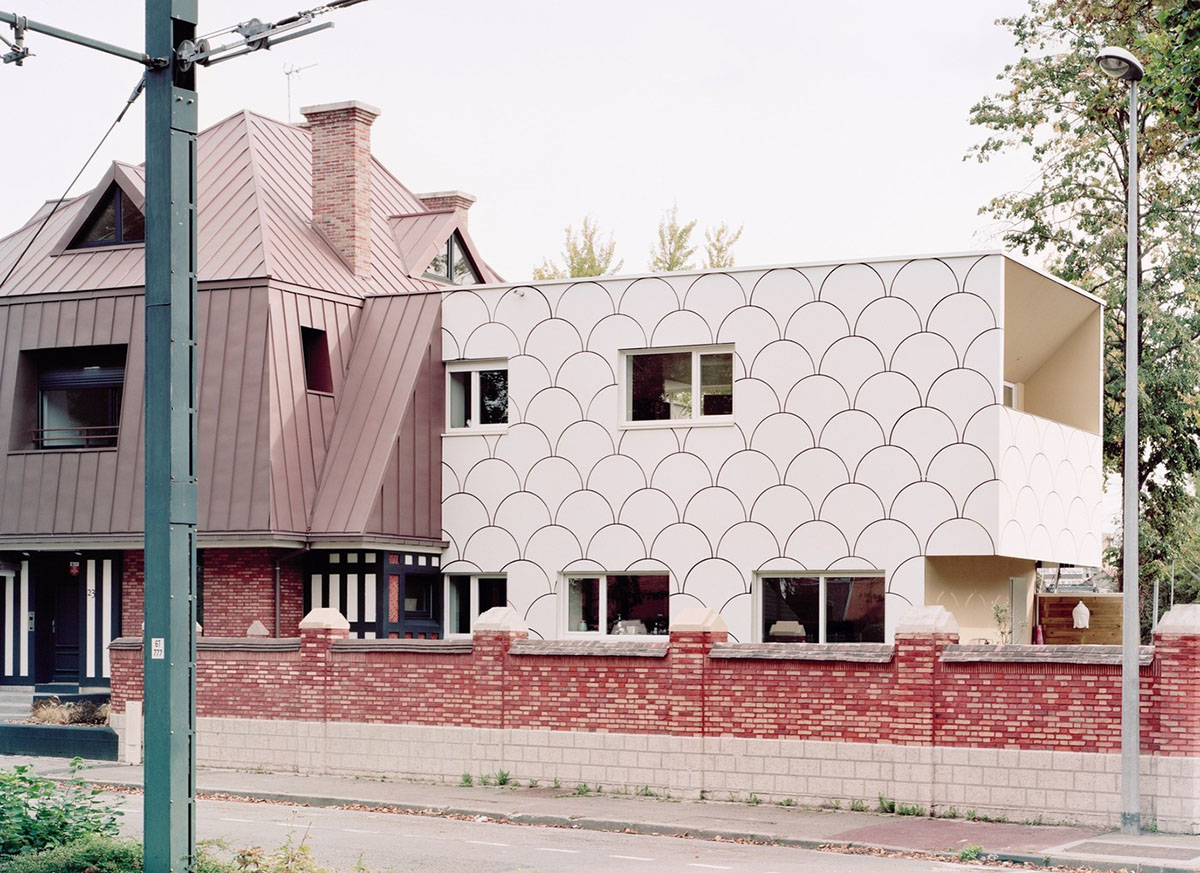 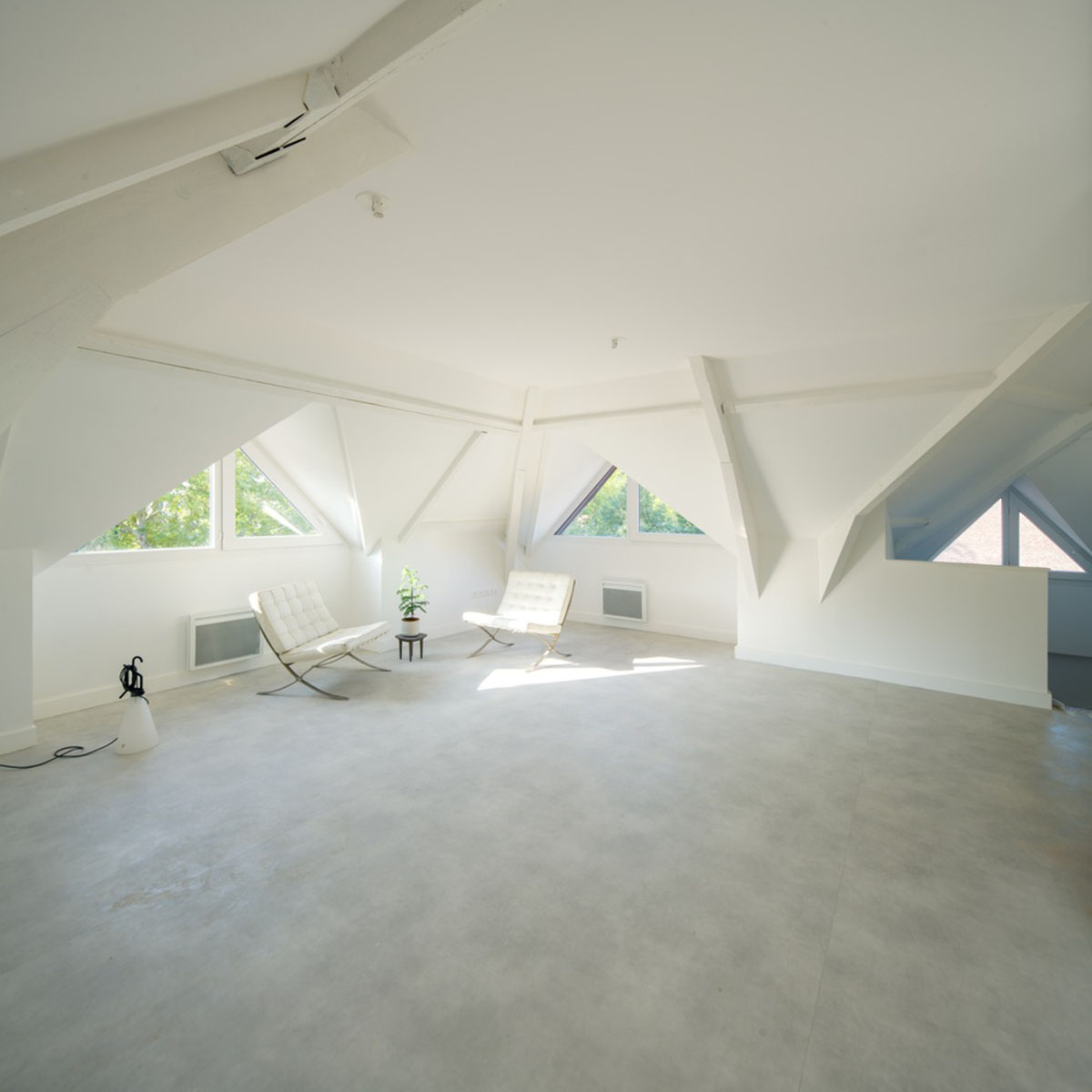 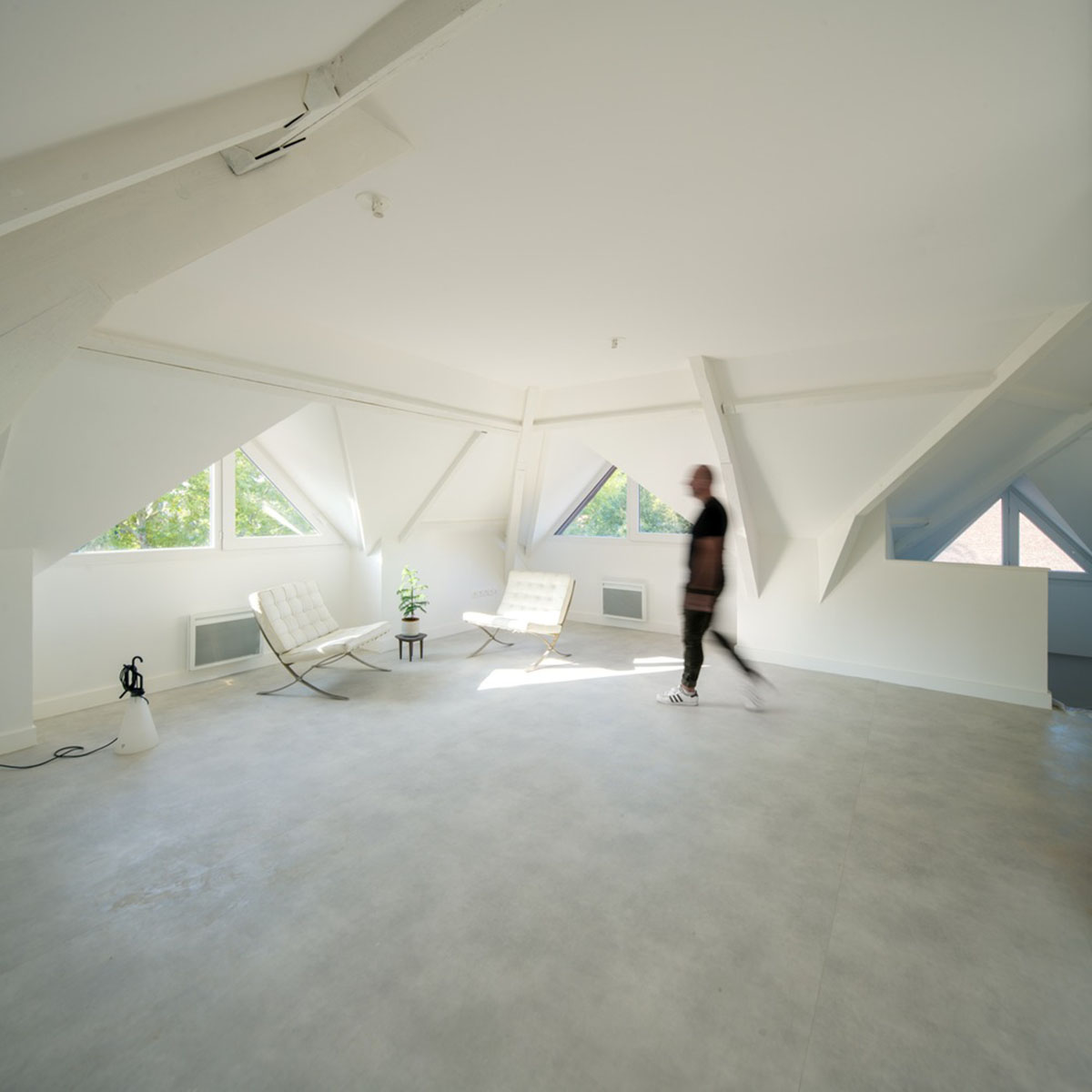 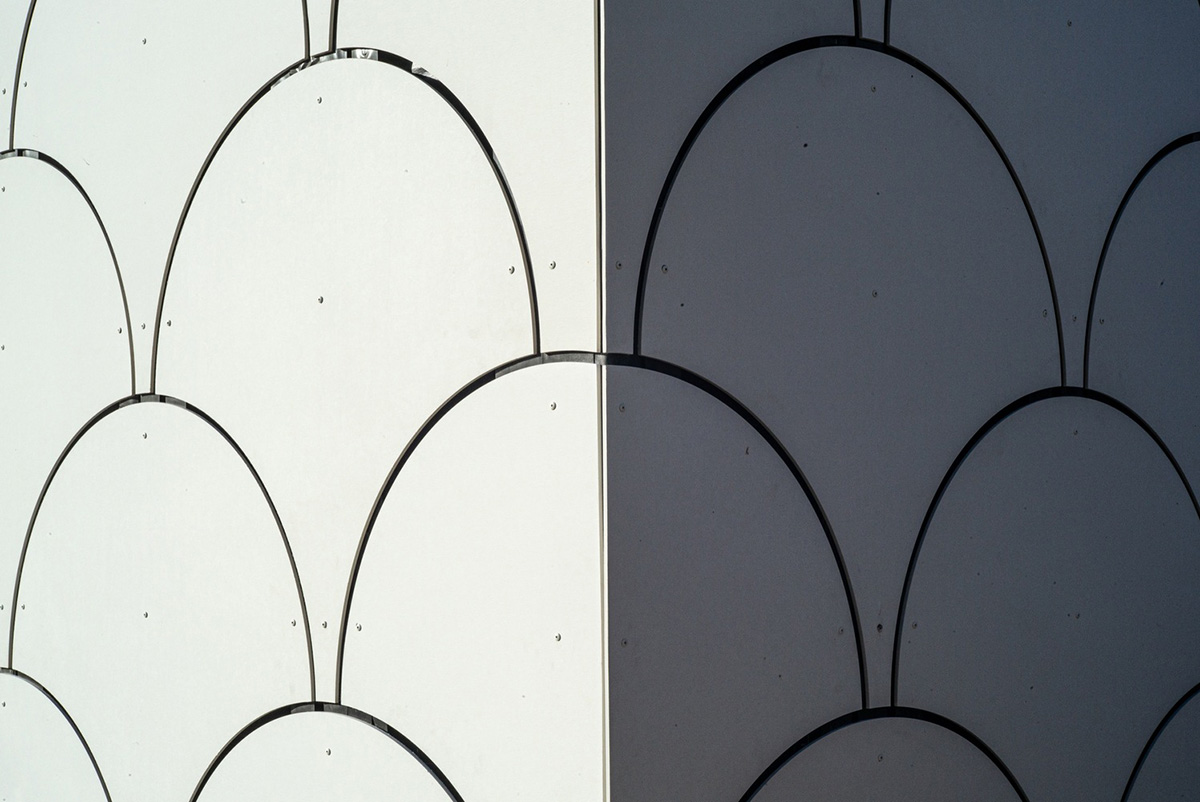 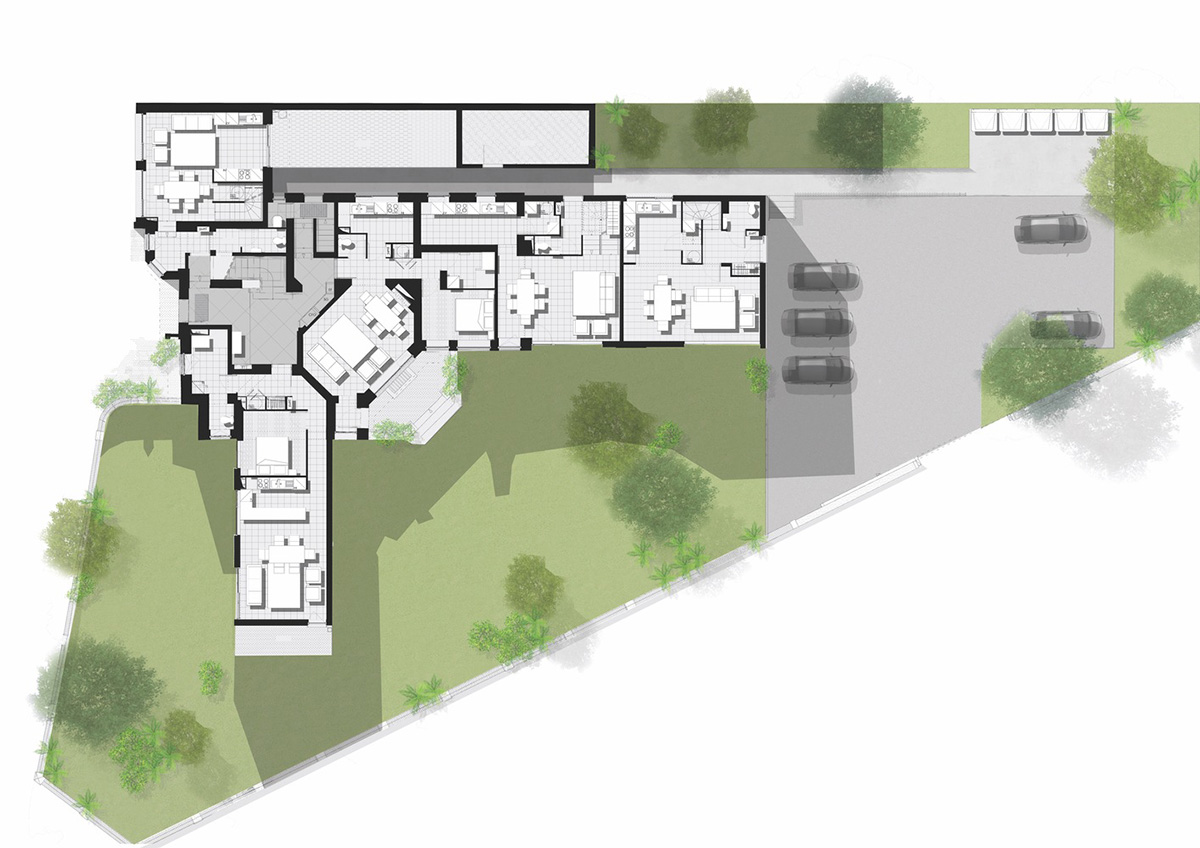 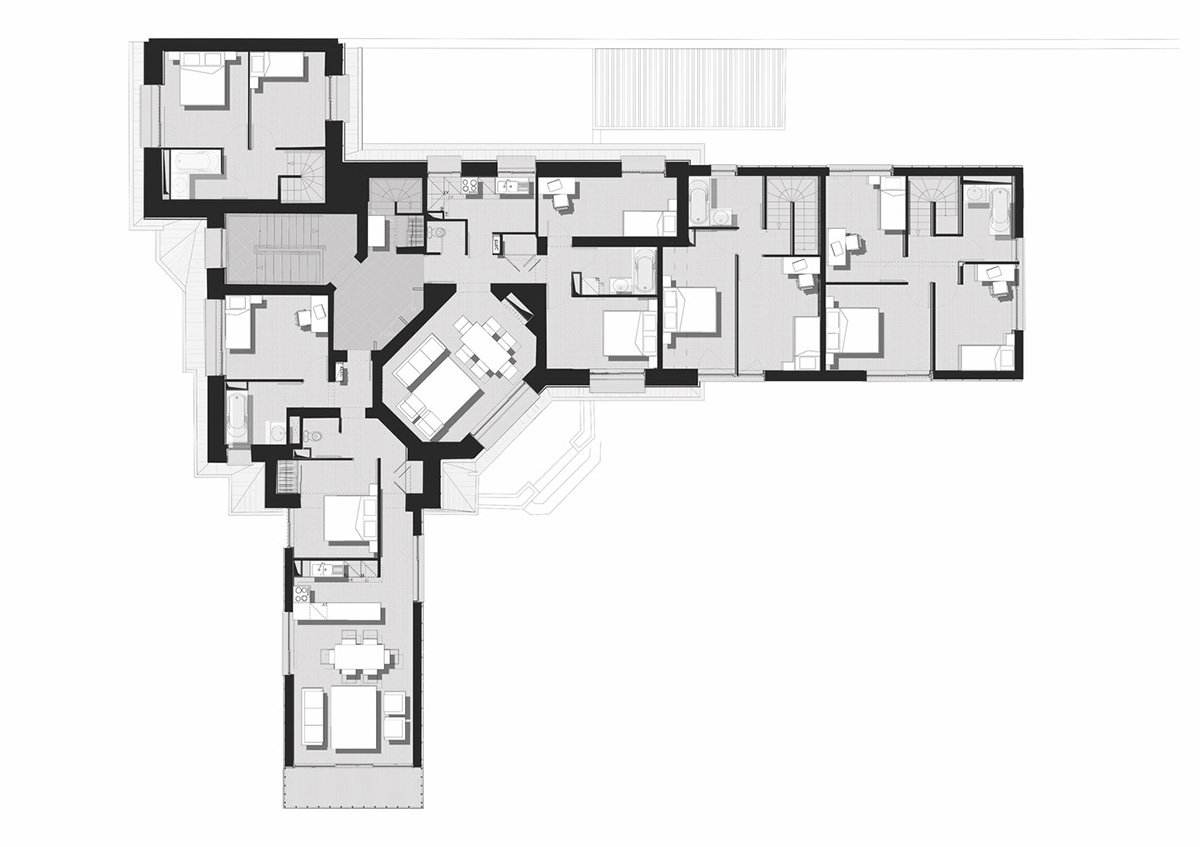 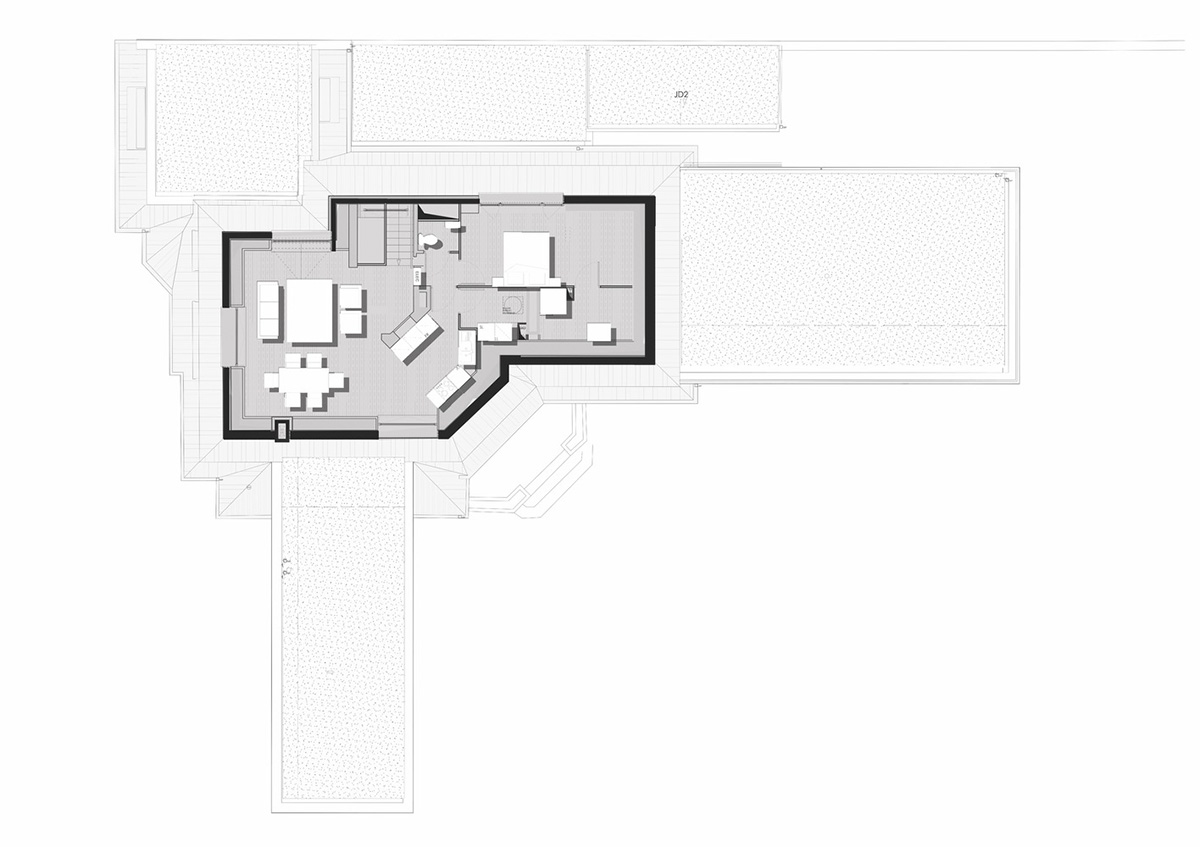 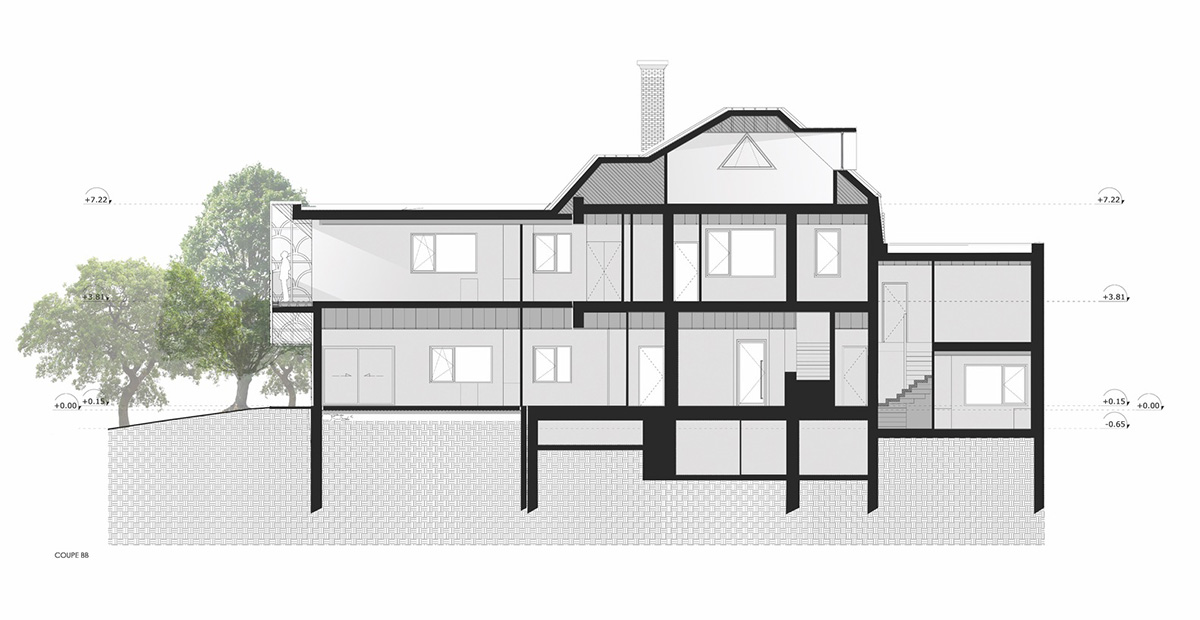 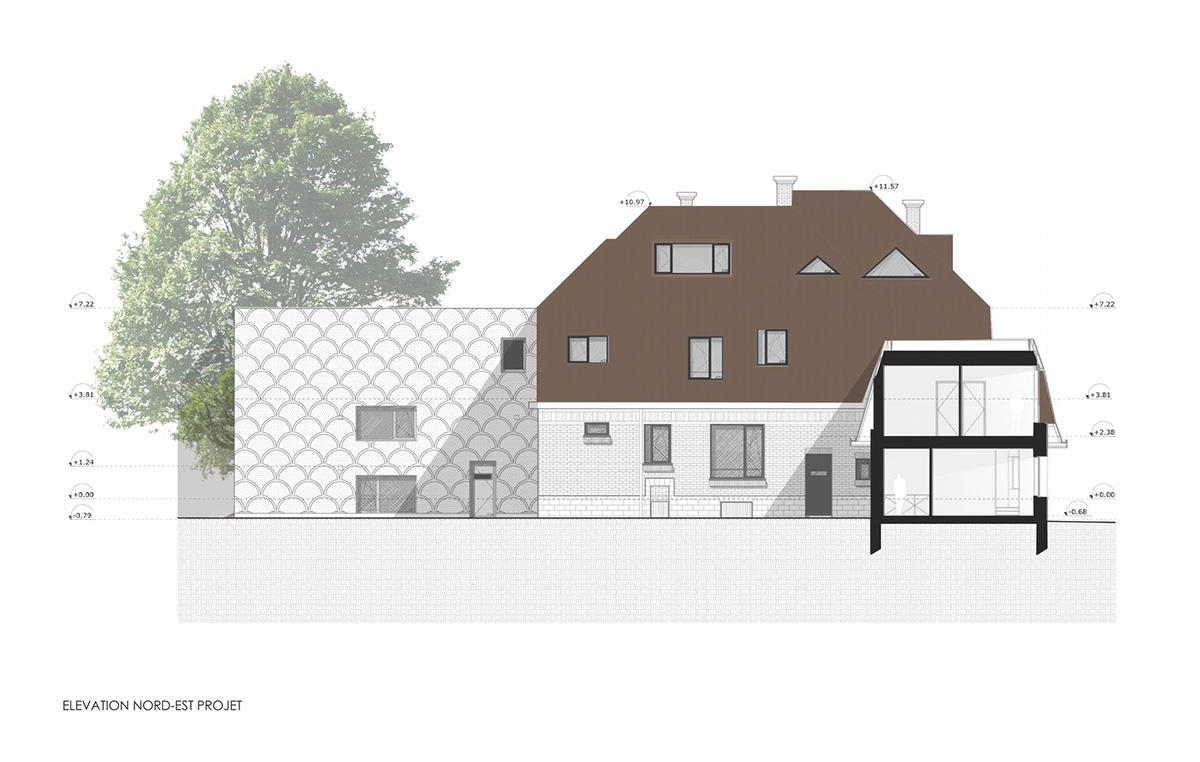 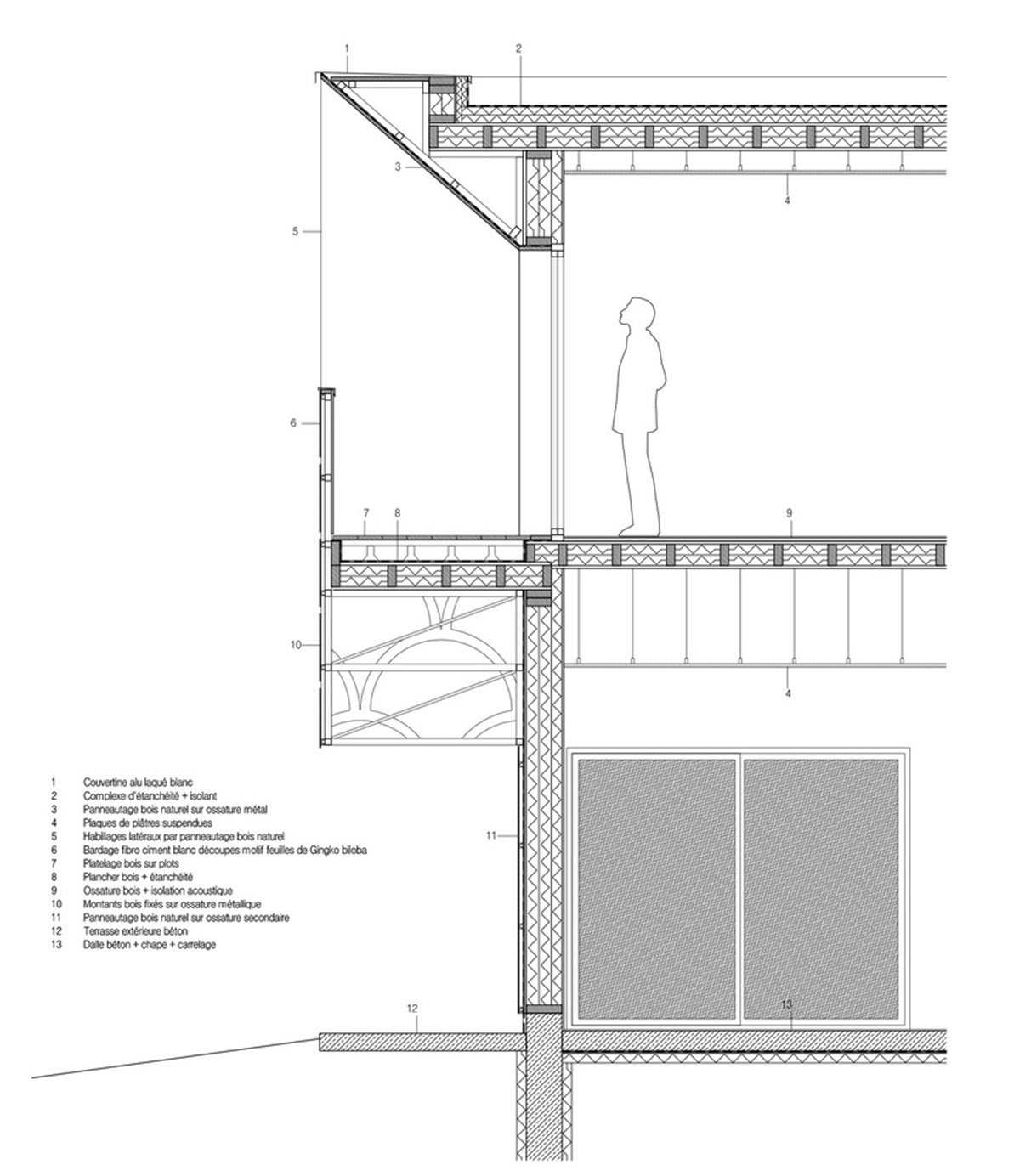