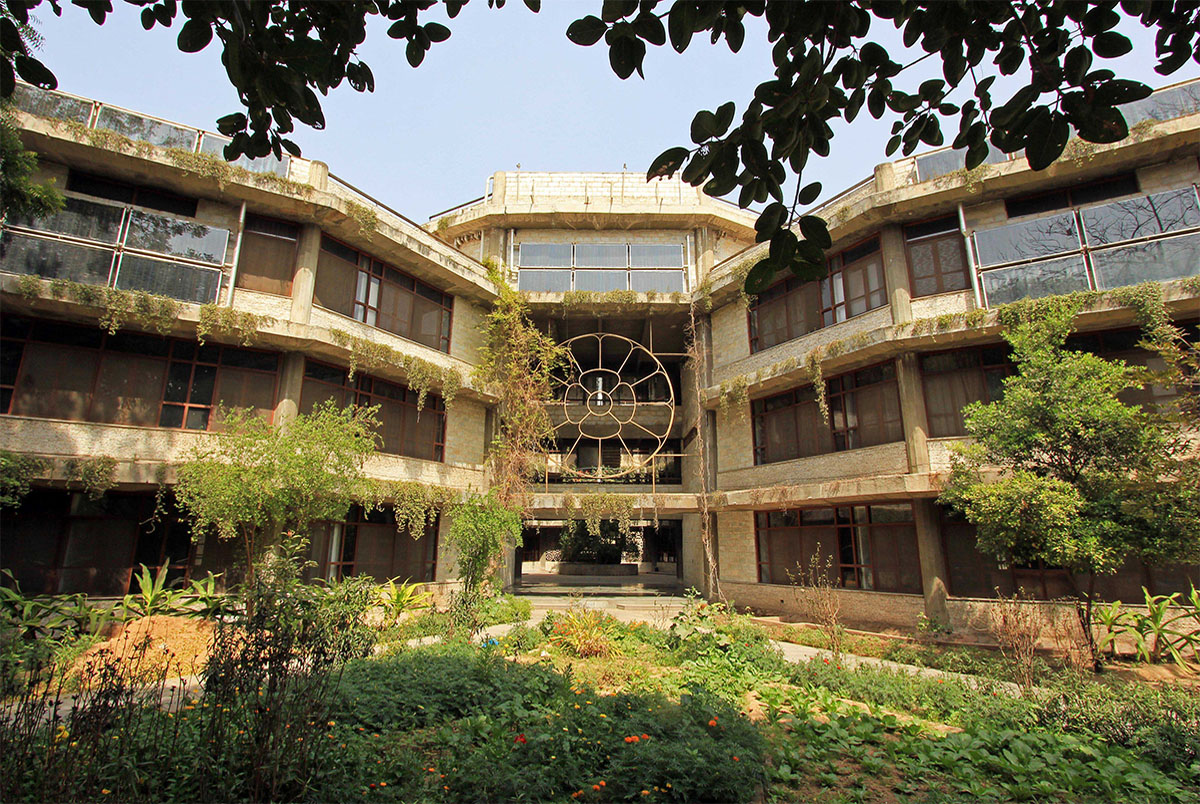 Educative Architectural Design is one of the most crucial layouts to be created, owing to the target audience it caters to. Numerous architects from the earliest eras to this day and age, have created numerous instances that have successfully altered the ripple of this Design sector. Architect Sanjay Prakash of Studio for Habitat Futures has designed an innovative and experimental school in New Delhi, to reformulate the perception of Institutional Architecture globally. Titled after the name of ‘The Mother’, the Mirambika School was devised on principles of education laid by Sri Aurobindo, thus also known as ‘the school with a difference’. The insightful and soul-stirring approach can be experienced, in each of the segments of space design, bringing about a tranquil aura for harbouring a value-oriented education system.

The architect's brief had definitive instructions laid out along with a tailored set of requirements. In addition to the specification of implementing a flexible design, it also included the pre-requisite of utilizing natural and honest materials. An evitable factor that unites the entire design scheme into one harmonious frame is its periodic integration of the built with the natural vegetation, which too was an integral mention in the brief. With each space blended by subtle transitions, the design emerges as ‘a bridge between heaven and Earth’- synonymous with the ideology of Sri Aurobindo. 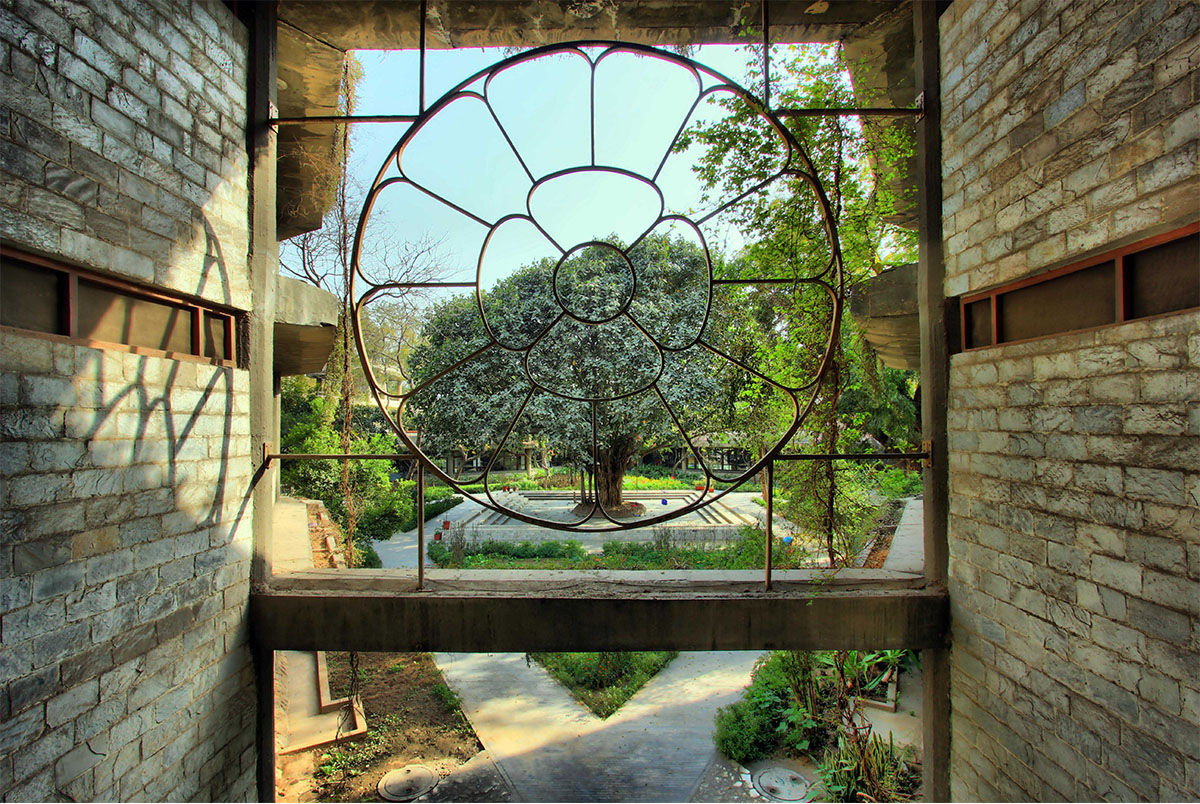 An insight through the conceptual  Mother's Symbol

Located on the Aurobindo Marg, New Delhi; the 48,000 square metre site consists of a large playfield shared with the Mother’s International School along with the main structure on the northern side. Numerous smaller playfields have been placed adjacent to the southern boundary wall, dedicated specifically to the users of the Mirambika School.

In order to implement a holistic design concept that would serve as a catalyst to the all-round development of the child, as per the vision of the pious philosopher, architect adopted an exclusive procedure. He sought to devise the layout in a manner such that no two rooms are alike and that they have a green interface introduced within each space use. Supplementing this idea, the flow of spaces from the indoor to the outdoor and vice versa was aimed at further galvanizing the young user’s creativity along with influencing their innate imaginations. 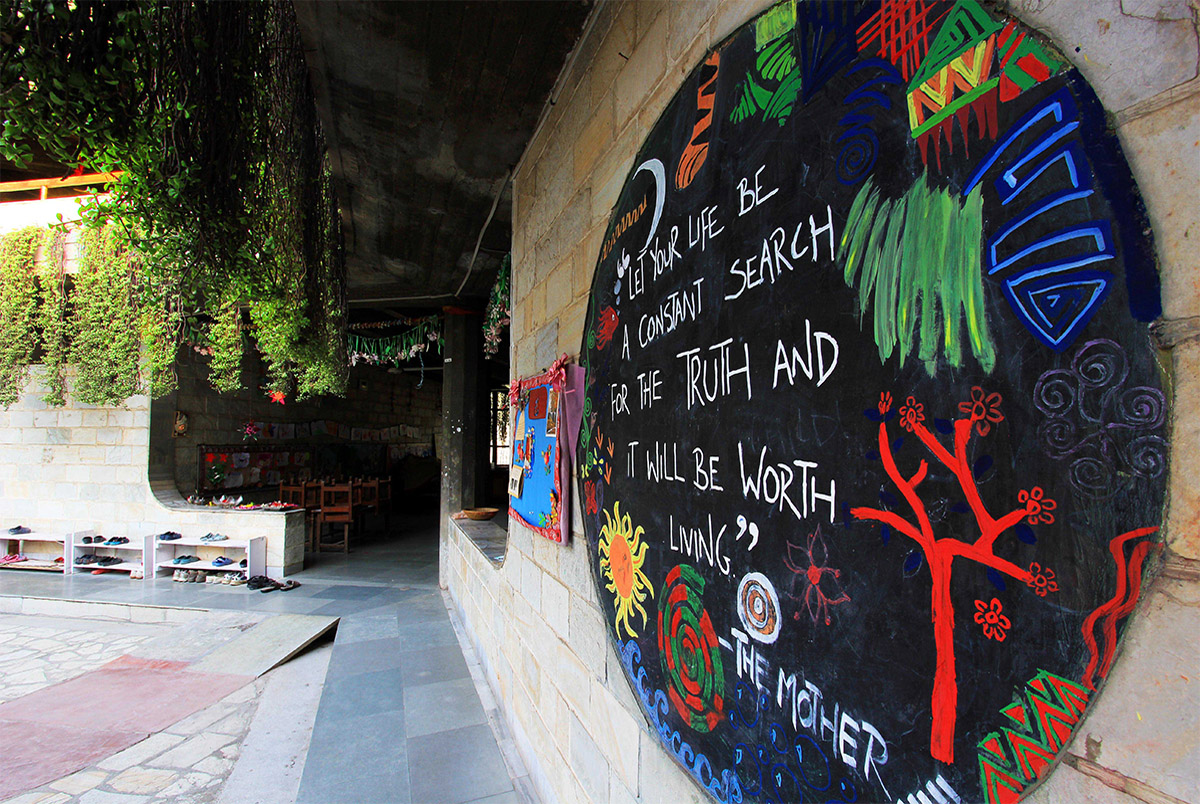 Colourful installation as a part of being User-Centric

Owing to the aspect of amalgamating the biotic and the abiotic components as per the stated brief, the planning involved the introduction of twelve small and one central courtyard, figurative of the Mother’s Symbol. The secondary courtyards signify her virtuous powers while the primary stands for ‘Aditi’ or ‘the inferno of fire’. The hardscaped central courtyard has been efficiently placed with the classrooms circumscribed around it, thus allowing the entire built up to be permeable to a combination of sunlight and shadow, cast due to the flanking tree in the middle. 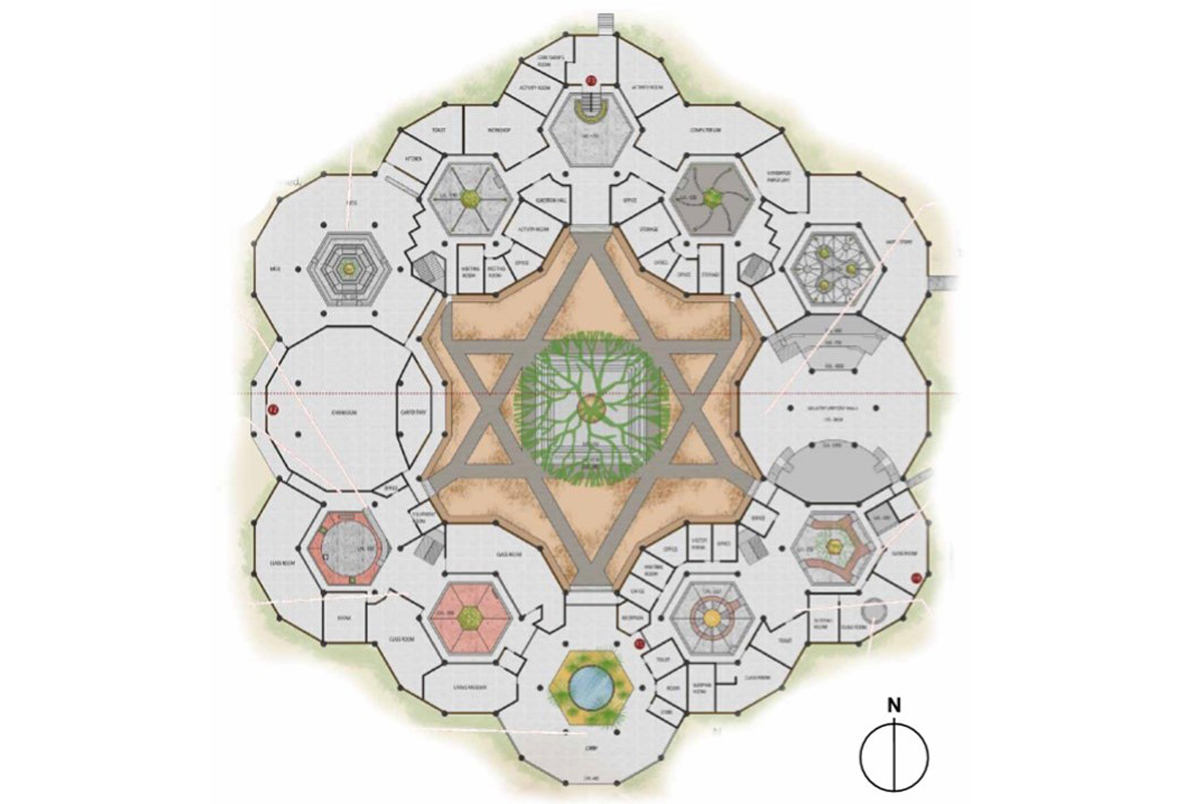 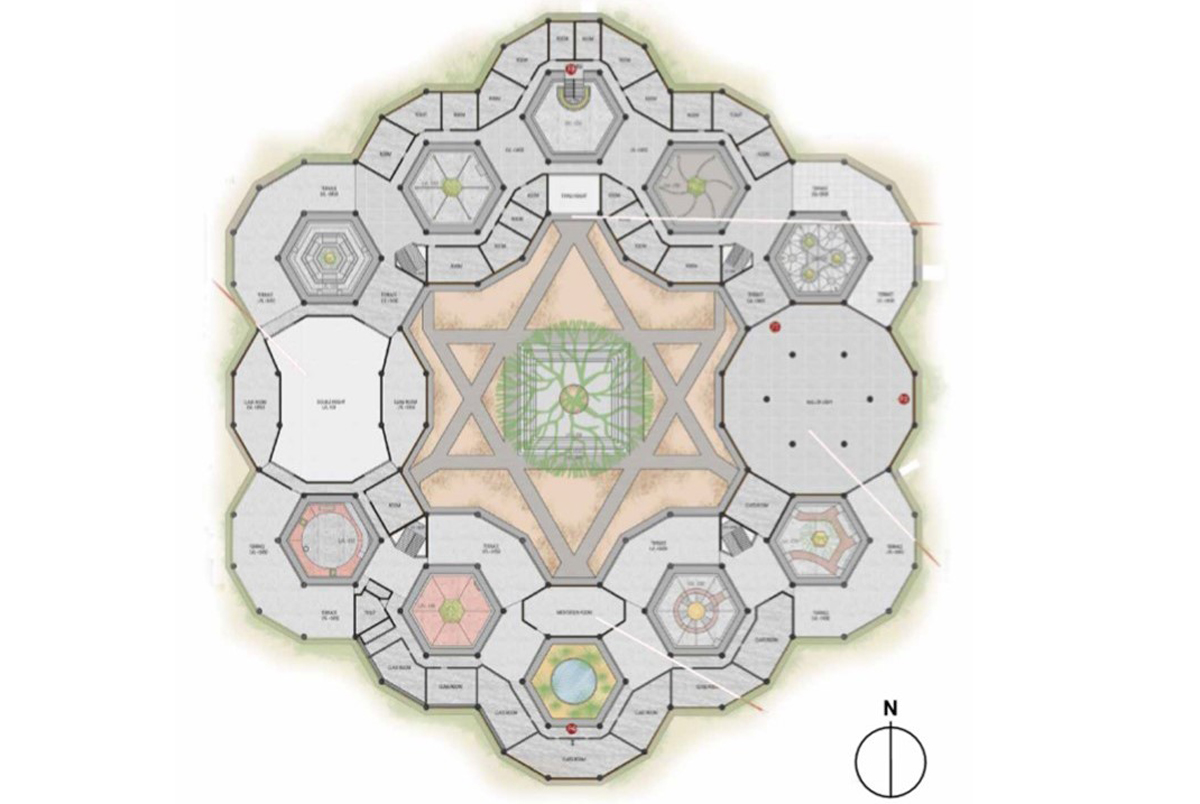 For the ease of remembrance, a space nomenclature guided by their orientation and the position of the clock was adopted. The north courtyard was referred to as the 12 O’ clock and the south as 6 O’ clock, which is the designated entrance to the built-up as well. The zoning of the spaces horizontally also consisted of placing the congregational spaces primarily at the 3 O’ clock and 9 O’ clock positions. 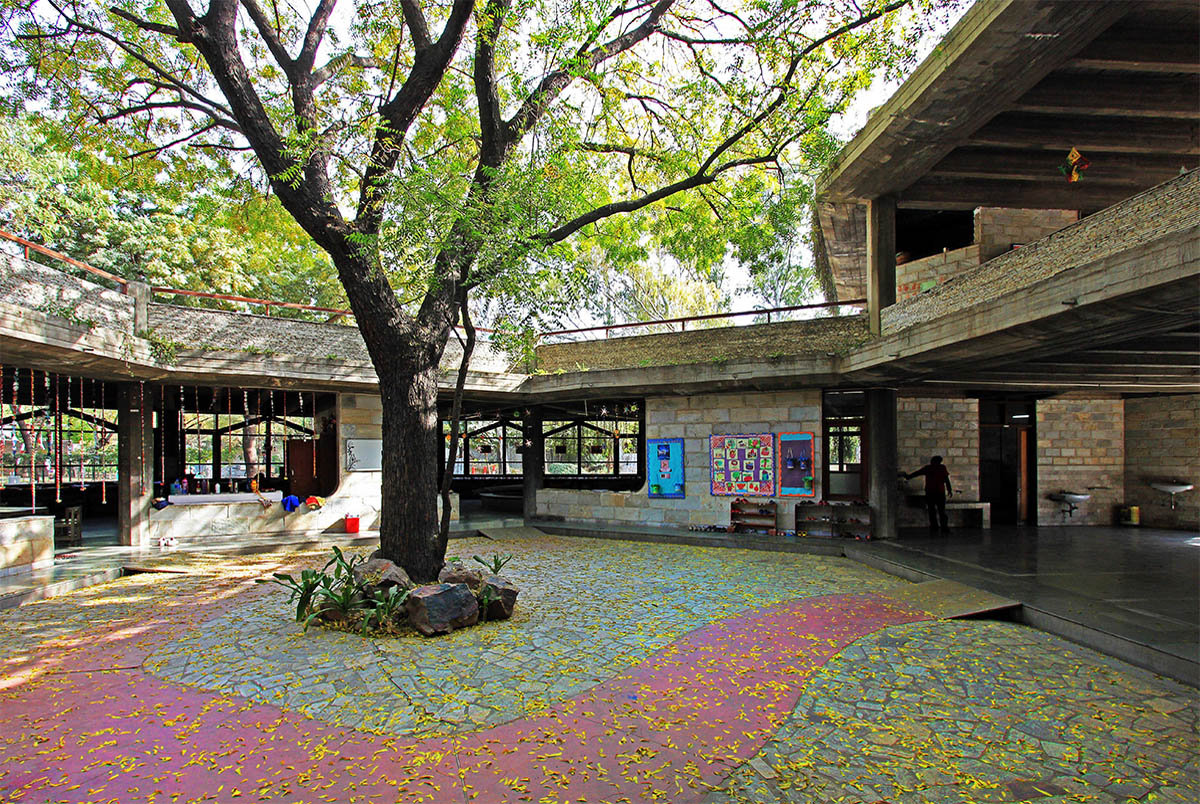 As per the vertical zoning, the lower floor constituted a mix of recreational, administrative and educational spaces. Each of these learning areas, are not only unique with respect to its design interface but also possesses a reflection of the user group for whom it has been designed. This user-centric concept has not only been administered to the specific spaces used frequently by the children but has also been mirrored to the architecture of the whole built form. ‘The school with no walls’, as it is referred to by many, arose out of the design strategy of constructing low height partition walls between the classrooms, creating an amorphous and relatable institutional design. Maintaining this design essence, the classrooms on the upper floor are divergent from each other, yet bound by the humility of their form and semblance. A slightly different area, which creates a striking effect due to its crisp lines and awe-inspiring ambience, is also located on the first floor of the structure. Titled as the ‘Hall of Light’, this naturally lit room also features triangular skylights on the roof, which appear as a contemporary lotus when viewed from a bird’s eye angle. 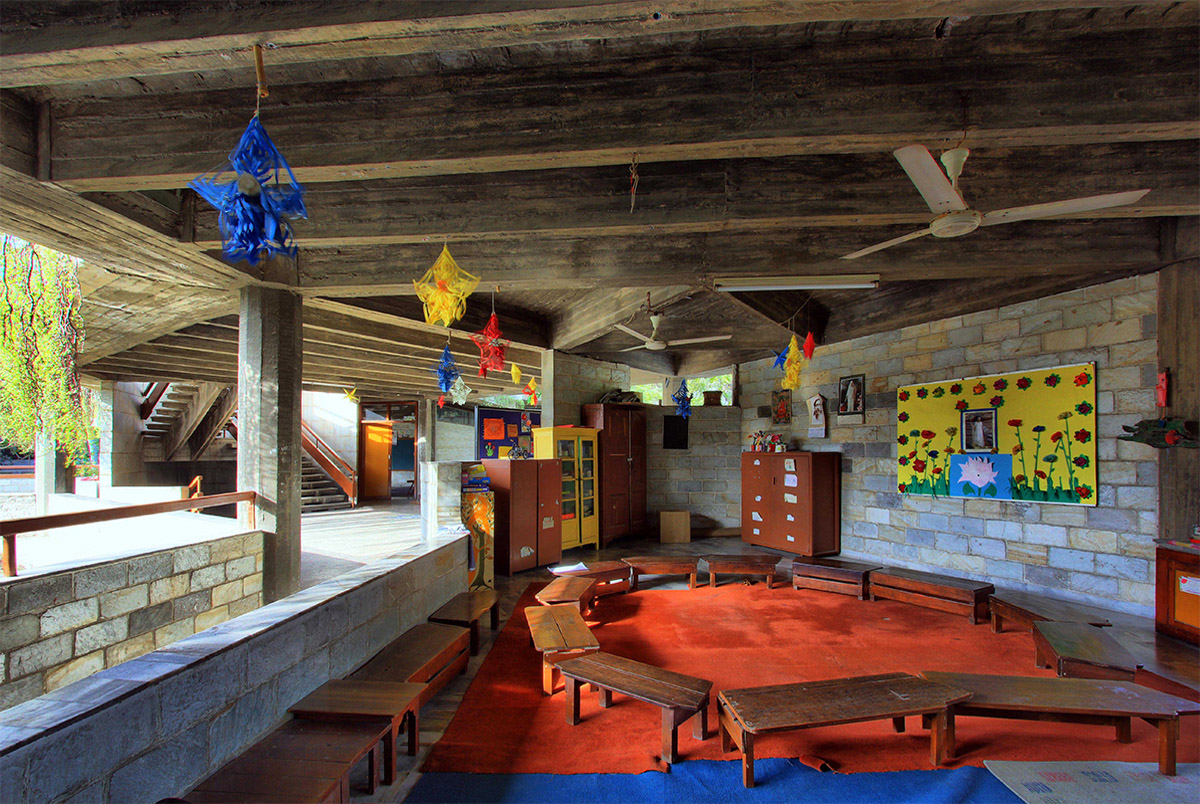 Configuring a flexible layout, such that the built scheme would be sustainable to be constructed and yet be adaptable for future renovations, was what the brief exactly desired. This was achieved through a grid, composed of squares and equilateral triangles, which could be repeated horizontally to create continuous forms and vertically to create floor plates. Each module of the conceived form spanned out as octagons measuring 7.2 m in the perimeter. To lay the structural grid, this length was further divided into 8 equal parts of 0.9 m measured centre to centre from each column, thus marking a clear span of 0.84m. The congruency of the structural dimensions was maintained while planning the commuting spaces, the furniture as well as entry points to each space. With regard to executing a structure responsive to the micro-climate of Delhi, opaque walls were chosen instead of glass fenestrations, for the west façade. Additionally, the presence of two large halls at the 3 O’ clock and 9 O’ clock positions respectively aided to minimize the entry of direct sunlight into the volume. An array of trees around the built-up administered a similar function; while the inward courtyard planning allowed reflected rays to light up the necessary spaces. Detailed design aspects, for instance, the terrazzo flooring and a curtain of creepers, also worked in cognition to provide thermal comfort to the users. 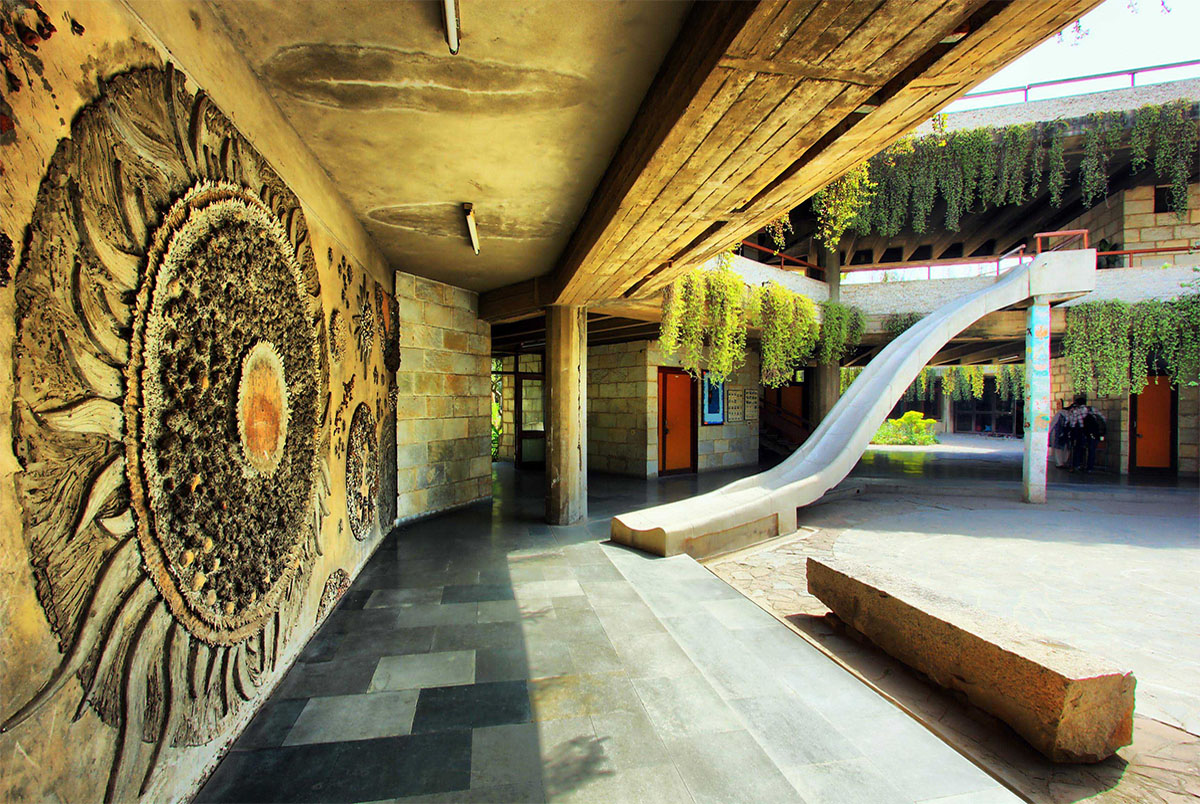 Mentioned in the twentieth edition of one of the main reference works in architectural history by Sir Bannister Fletcher, the ‘Mirambika School’ is to date considered as a pioneer interpretation of institutional space design.

> via inputs from Studio for Habitat Futures