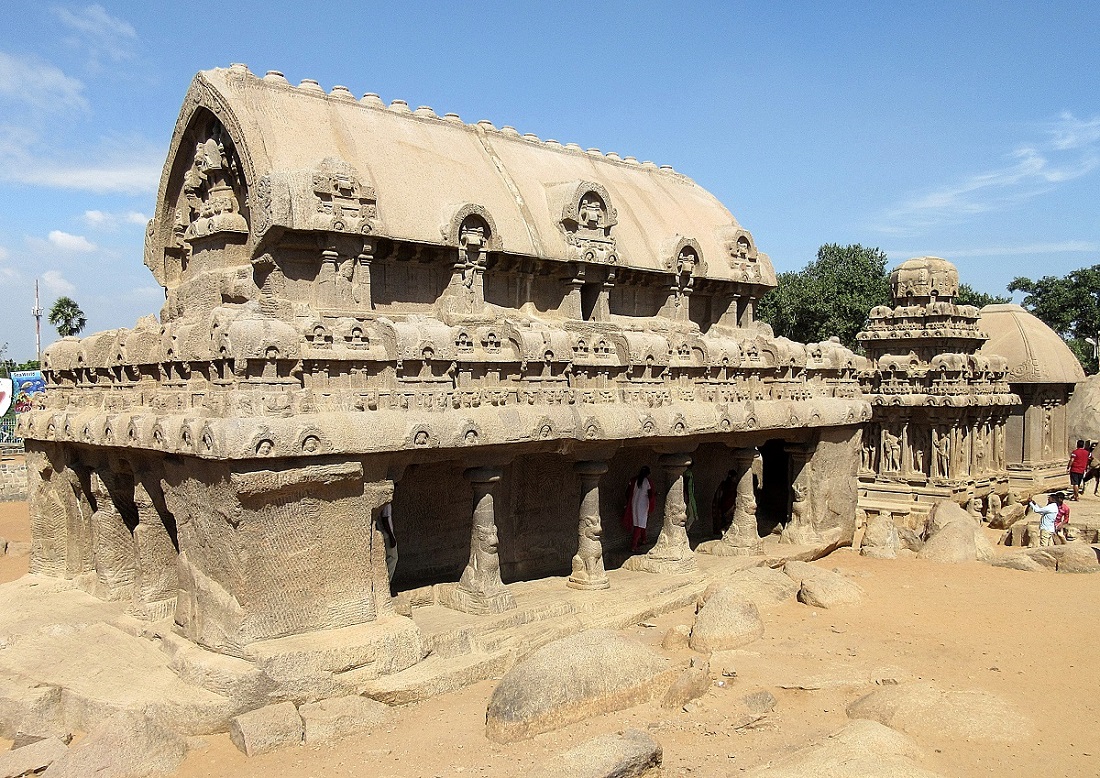 Mamallapuram, a 13-century old small town of fifteen thousand population in Tamil Nadu came to limelight recently when Indian Prime Minister Narendra Modi and Chinese President Xi Jinping chose this venue for their informal summit on 11th and 12th October 2019. The reason for selection of this place for such a high-level summit lies in its ancient connect. History reveals that in the 8th Century, Mamallapuram was also a venue for finalising security pact between the then Pallava king and the Chinese emperor. 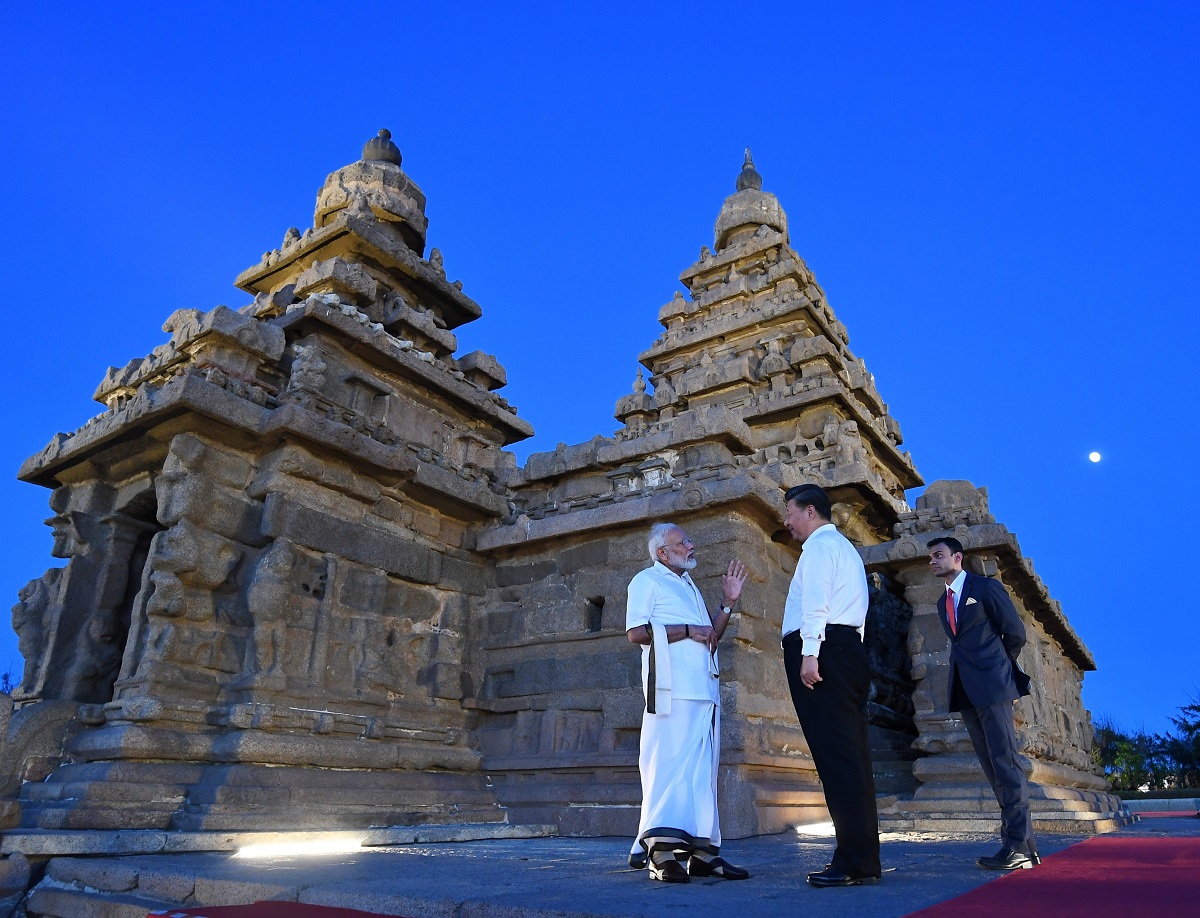 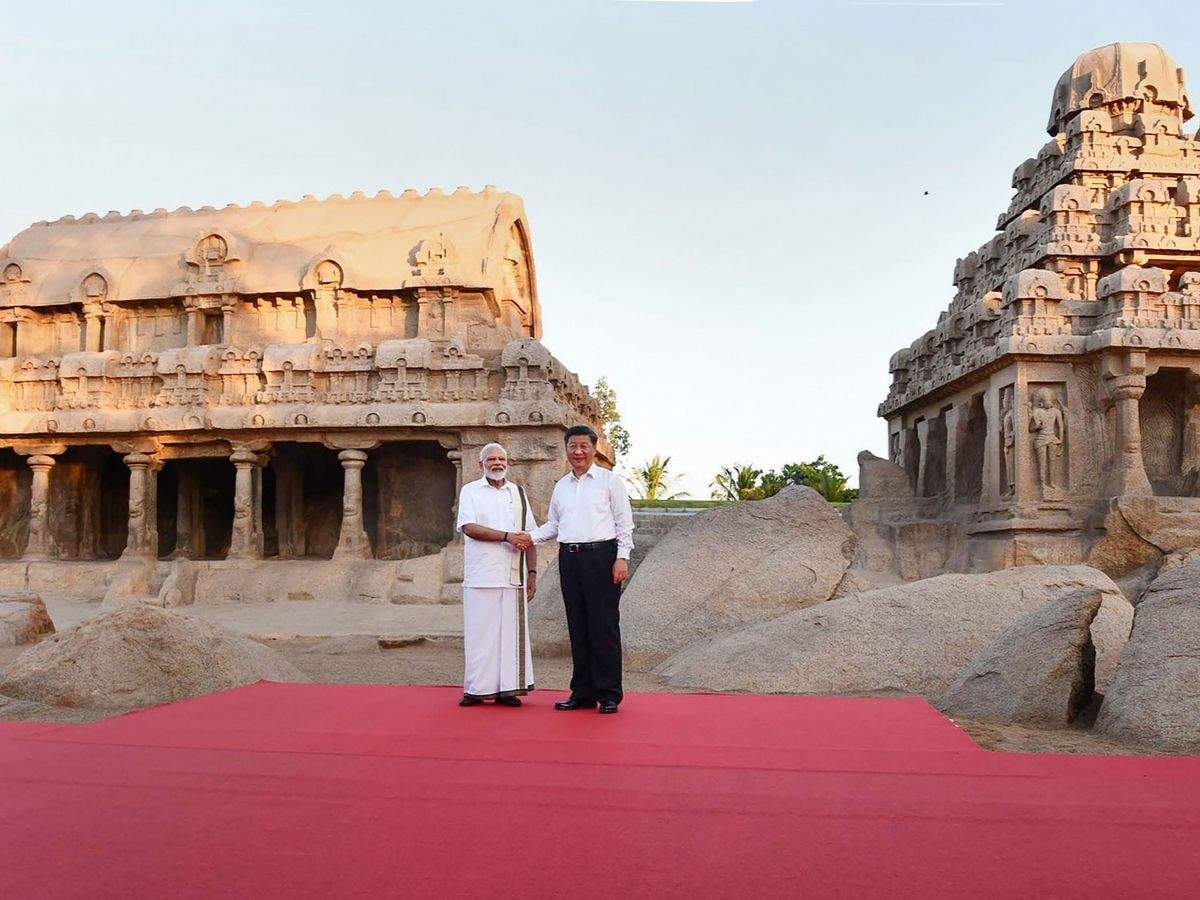 Narendra Modi and Xi Jinping in the campus of Pancha Rathas. Photo Courtesy of indiatimes.

The author has an opportunity to personally visit this town sometime back and see all the historic monuments where the Modi-Xi Jinping summit held recently. Keeping in view the historic importance of these monuments which are UNESCO World Heritage sites, it was felt appropriate to acquaint the international community with architectural wonders of this small town. 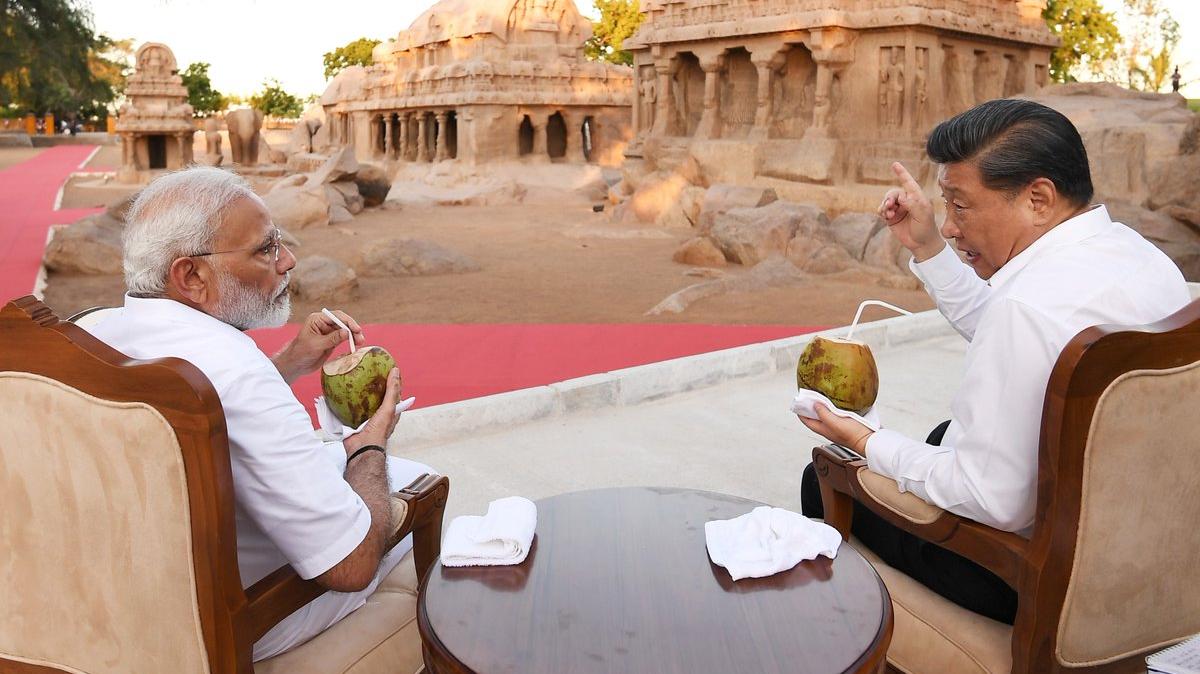 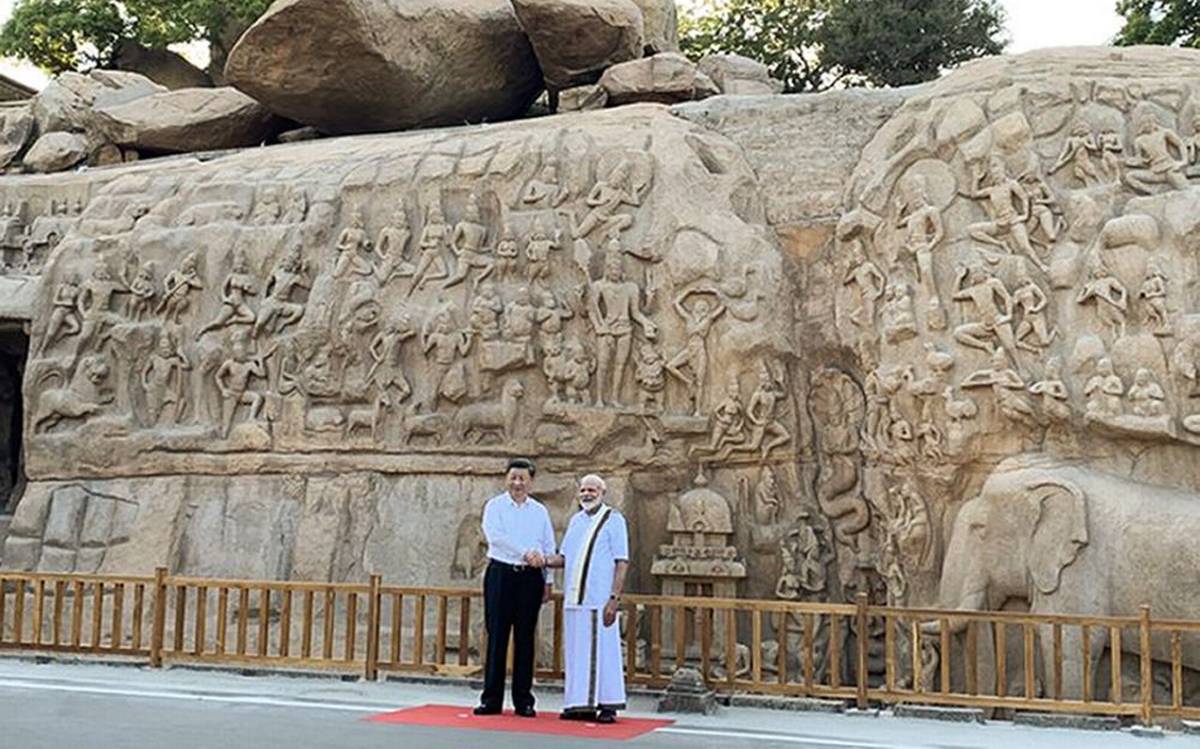 Mamallapuram – the ancient port town – is located on the Coromandal coast 60 km south of Chennai. Popularly known as Mahabalipuram, it was built by three Pallava kings, Mahendravarman, Narasimhavarman and Rajasimhan, who ruled in the 7th and 8th centuries with their capital at Kanchipuram. The name derives from the title given to Narasimhavarman: Mamallan ...great wrestler. Mamallapuram was at the peak of its prosperity during the reign of Narasimhavarman.

Rock-cut monuments, caves and temples are clustered near the shoreline and represent the pinnacle of early Dravidian artistic and architectural achievement.

Pallava kings were not only great patrons of all the arts, but they were also pioneers. Many of them were themselves accomplished poets, dramatists and artists. Mamallapuram provided them with the field, the material and the setting for experimentation. It was here that they set about to realise all that their highly aesthetic minds dreamed.

A kilometre-long, 35-metre-high rocky ridge runs parallel to the coast at the mouth of the Palar River. Rocks and boulders scattered all over the place appear to have fired their imaginations and the Pallavas to convert the place into a vast gallery of art. The tops and sides of the hill were carved, scoured or excavated and the outlying rocks and boulders were hewn into shrines and monuments.

The wonders of Mamallapuram have endured for 13 centuries, withstanding the pitiless onslaught of the monsoon, battering of sea-waves and the treachery of drifting sands.

The Pallava era which represents a transition from the ancient to the medieval saw the beginnings of the Dravidian style of art and architecture. It may broadly be divided into two phases: The first phase consists of only rock-cut monuments of which (besides many mandapas) Arjuna's Penance and Pancha Rathas are most noteworthy. The second phase favoured structural or stone-built temples which provided a large canvas for the display of the sculptors' skill. Of these structural temples, the most outstanding example is the Shore Temple. 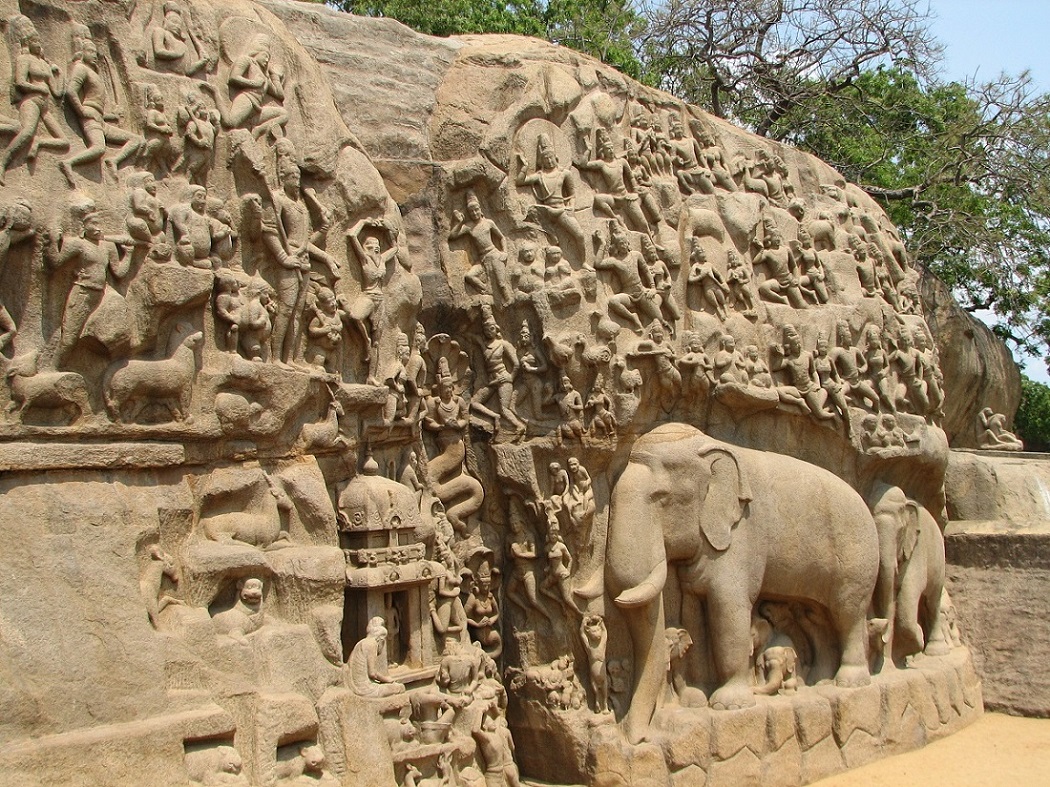 Arjuna's Penance is hailed as one of the glories of Indian art. Carved into the sheer side of a massive rock (about 30-metre long and 14-metre high) it is said to be the largest bas-relief sculpture in the world. Arjun is shown in the stance of an ascetic. Such is the power of Tapasya that inhabitants of the three worlds, mortal, celestial and the netherworld, hasten to have his darshan.

The sculptors have even incorporated a bit of humour in the scene: dozens of little mice gather in awe around a cat whose posture duplicates that of the Pandava hero. The cat's eye-lids are lowered but not quite shut and he bestows a cunning look on the little mice, obviously waiting for the precise moment to spring. 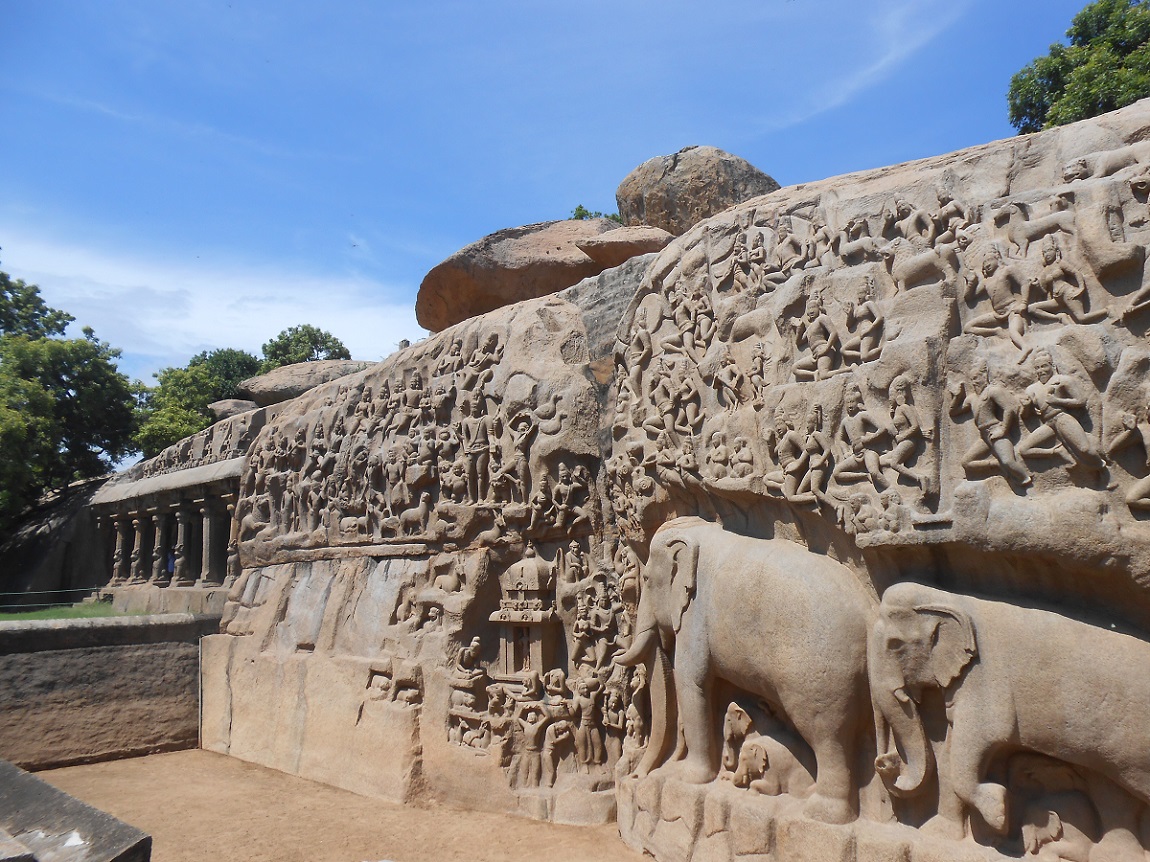 Some other important events which occurred during the reign of the Pallava kings have also been depicted here. This rock canvas has a small cleft in the centre which divided it into two. The figures carved on either side of the cleft are seen hurrying towards it, presumably to behold a miracle that has occurred or is about to occur. It gets its name from a figure which is believed to be of Arjuna, the hero of Mahabharata epic doing penance to secure from Shiva a powerful weapon to destroy the enemies who had deprived him and his brothers of their kingdom. Lord Shiva was pleased and granted the boon Arjuna asked. The inhabitants of heaven, earth and mid-region rushed to witness this great event. There is another school of thought, according to which the scene depicts the penance of Bhagiratha, an ancestor of Rama, who asked Shiva to let the river Ganga flow over the earth. The cleft in the rock is said to depict Ganga descending into the world.

Pancha Rathas are other rock-cut masterpieces. These shrines are called rathas (chariots) because they resemble the big temple cars in which the images of the deities are taken out on procession. These monolithic structures in granite are rated as excellent examples of Pallava art. These five rathas are now known as Pancha Pandava Rathas. Four of them have been named after four of the five sons of Pandu, i.e., Dharmaraja, Bhima, Arjuna, and Sahadev. The fifth has been named after Draupadi, their common wife. 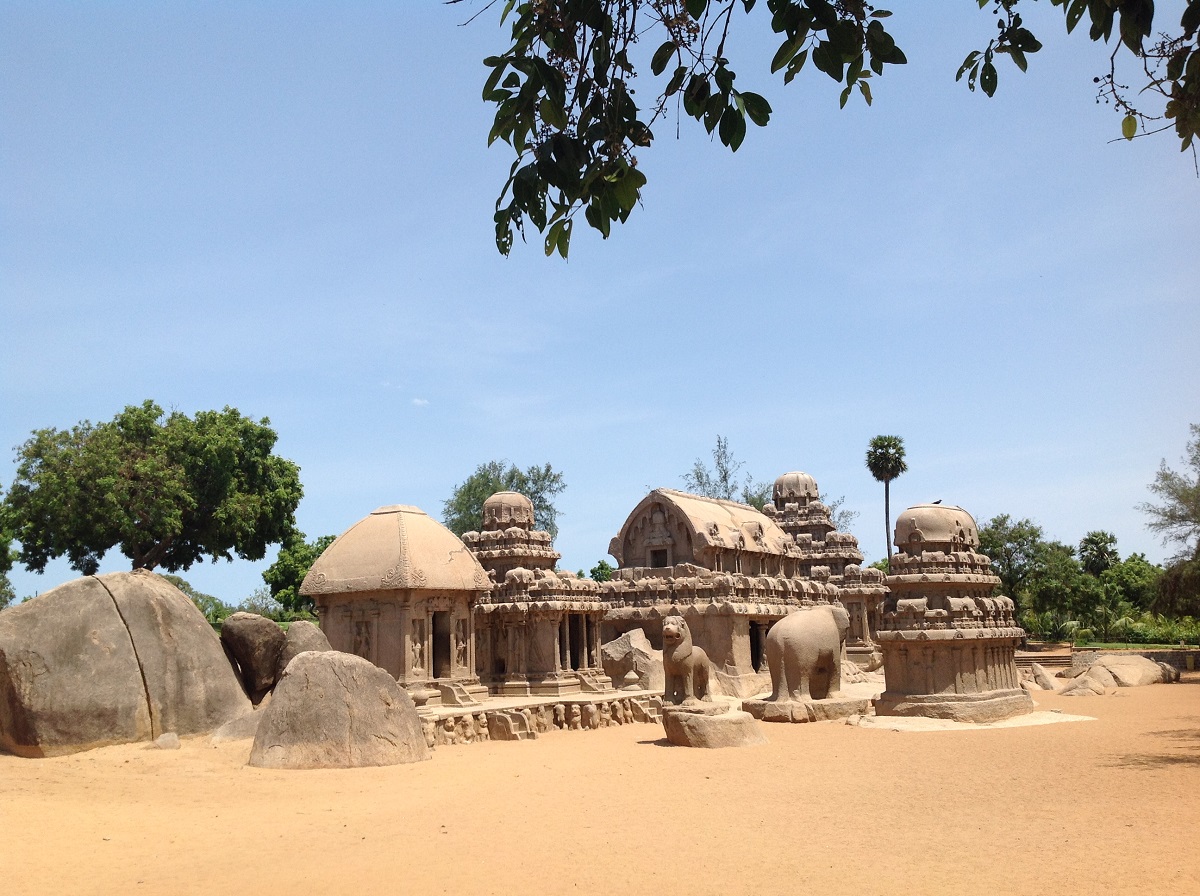 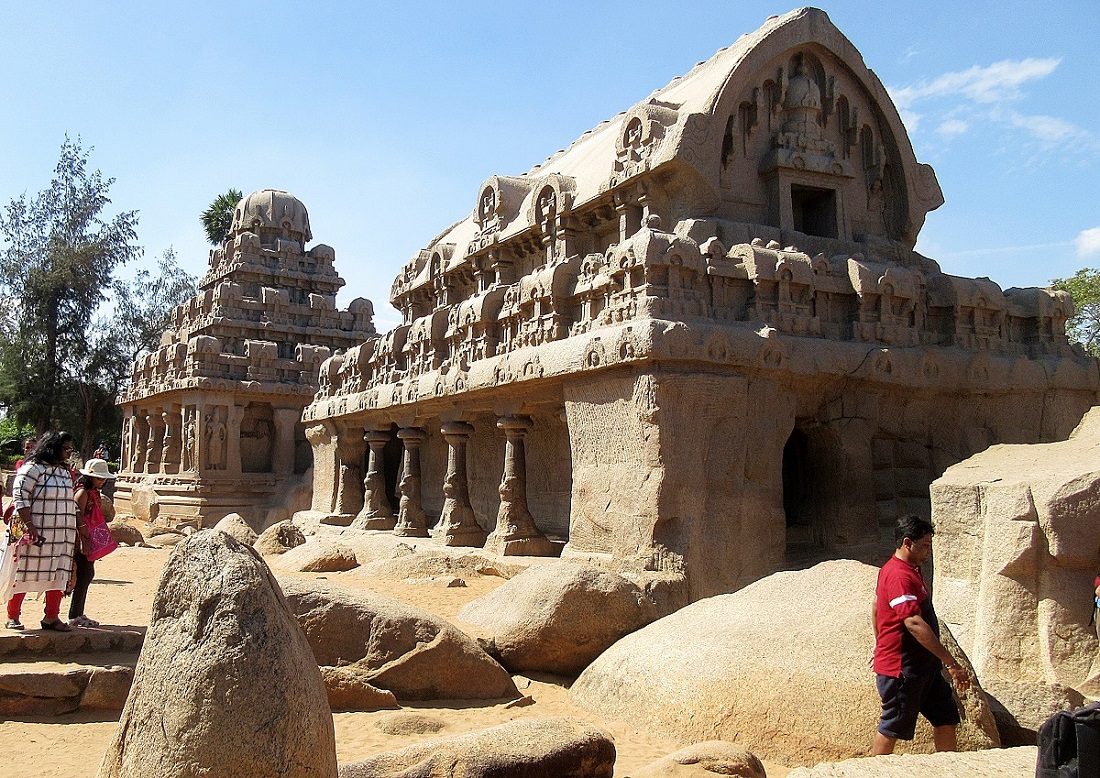 Of these four are in a row and the fifth one i.e., of Sahadeva, stands opposite the Arjuna Ratha. The Dharmaraja Ratha is the largest and most complete of the five rathas. It combines all the features of Pallava style-pillars in the portico with rampant lions, the pyramidal tower and the turreted roof. 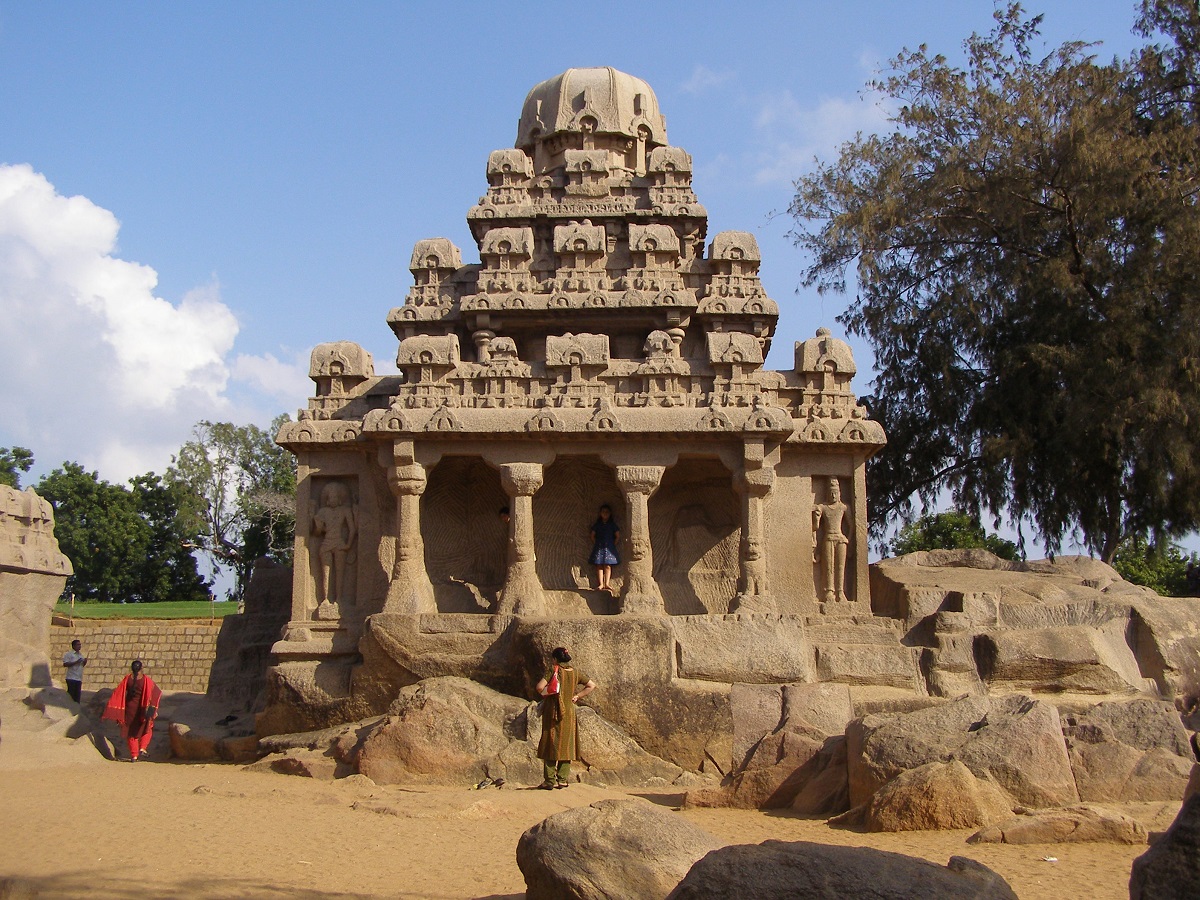 The Bhima Ratha is the second biggest ratha in the complex. This double-storied structure has a pillared gallery running all around it. It is situated in a row of four with Dharmaraja and Arjuna Rathas on either side. 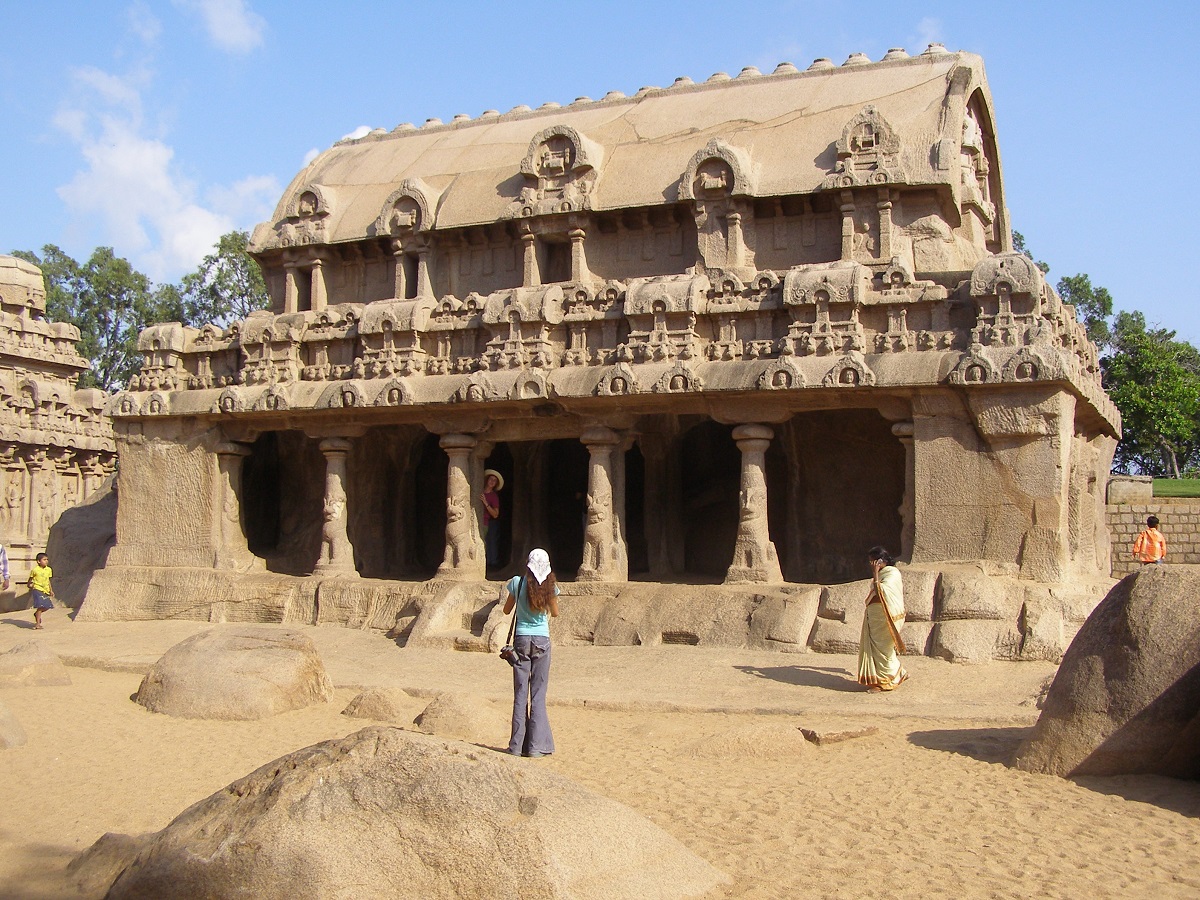 The Arjuna Ratha is also a two-storied structure with a small portico having ornamental pillars. Like the Dharmaraja Ratha, its vimana is built in four tiers and contains little heads set in the horse-shoe-shaped arches. The Draupadi Ratha is modelled after a hut with a vaulted straw roof and is as simple as it is elegant. It shares a common platform with Arjuna Ratha. In this ratha the image of Draupadi is enshrined as the goddess of Lakshmi. The Sahadeva Ratha stands in front of the Arjuna Ratha. This two-storied shrine is not a finished structure. It has a pillared portico and elaborately carved roof. The Shore Temple is yet another marvel in rock. As its name suggests, it stands on the extreme foreshore of the ancient port of Mamallapuram. It is the lone surviving evidence in the town of the second phase of Pallava architecture, namely structural or stone-built temples. It is believed that the seafaring Pallavas carried out rituals of ocean worship in this temple. It is not a simple temple but a complex of three. A Vishnu temple nestles between two Shiva temples, one facing east and another facing west.

Each of the two Shiva temples has a tower topped by an umbrella-shaped kalasa. The entire complex is enclosed by a massive wall, its parapet and coping crowned by figures of kneeling bulls. In the central shrine, there is a majestic figure of Vishnu in calm repose. The figure has been carved out of a rock which must have been in that place. Besides, there are many excellent sculptures of gods, goddesses and animals. Walking through the precincts of this temple is a unique experience. On seeing the forceful figures in hard rock one cannot help marvelling at the mastery of the Pallava sculptors.