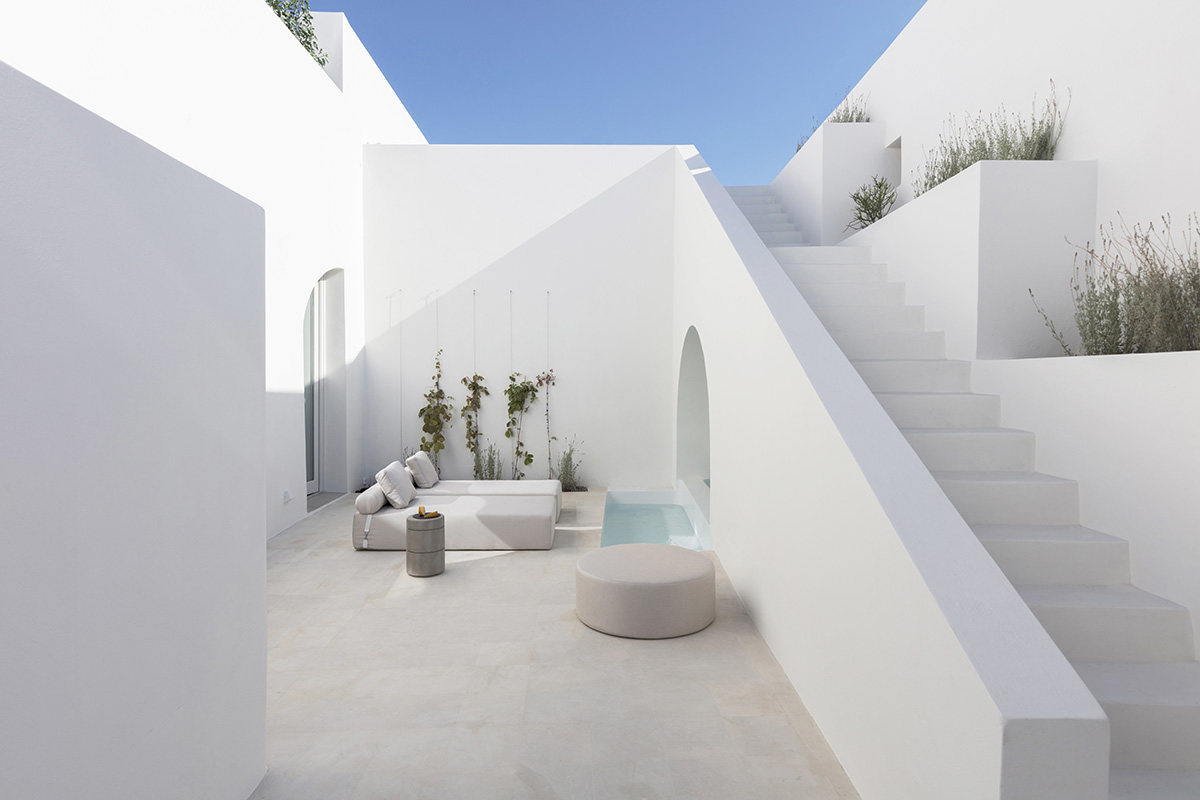 Greek architecture practice Kapsimalis Architects has converted a pair of old caved houses into new holiday residences in the traditional village of Fira located on the Santorini Island.

By keeping the outer shell of both houses, bright and white, as it was, the architects brought more modern, sleek and pure interior to both houses to entirely serve their purposes.

Kapsimalis Architects, based in Santorini, is known with its clean, white and powder-colored interiors as well as rounded geometries. The studio completed several summer houses in Greece. A summer villa for Arcadia Hotel and a cave-like residence on the outskirts of Pyrgos are among the projects of the studio. 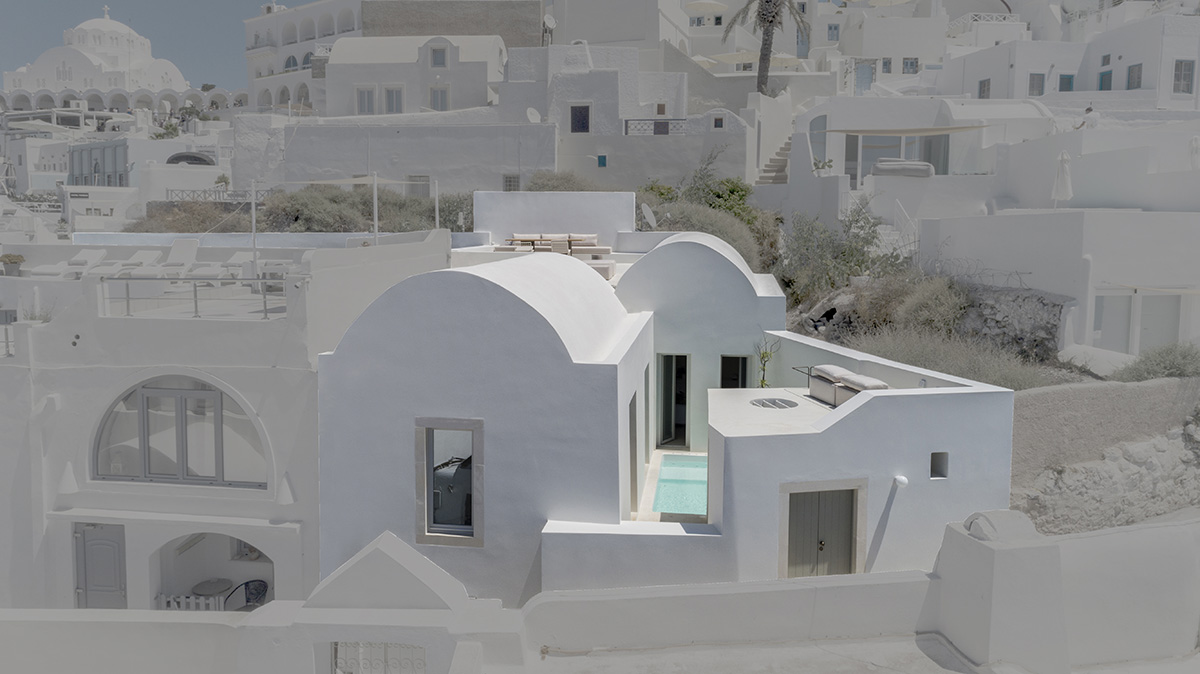 Named Two holiday residences in Fira, the houses are located in the traditional village of Fira, in Caldera of Santorini island. The existing elements of the existing structure - consisting of the main residence and its small yard and three caves for storing products and a donkey barn with a big enclosed yard in front - have been transformed into the new residences. 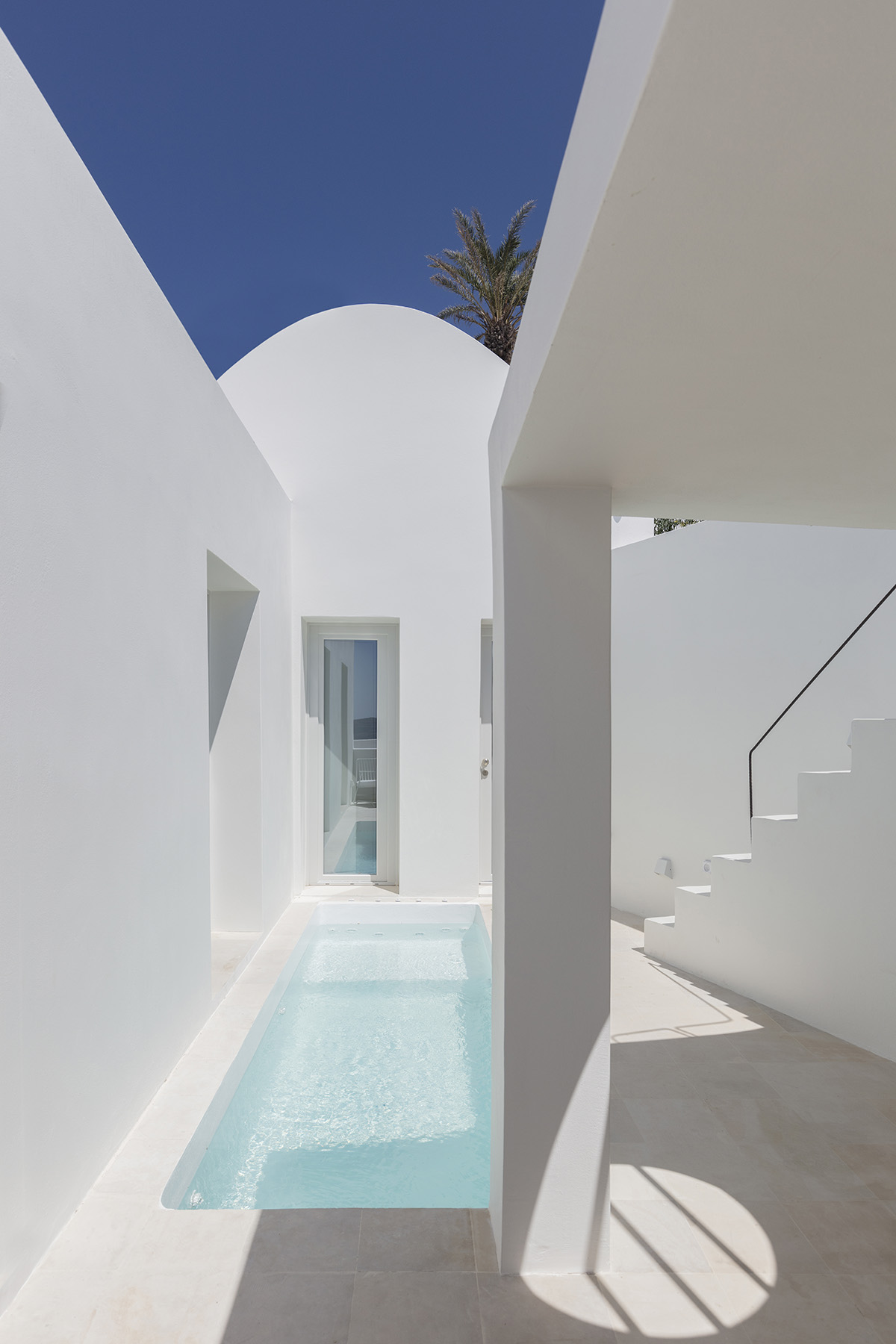 The whole former residence converted into two summer houses, retaining as much as its initial, original shell as well as its exterior spaces.

The main past residence forms the first summer house, consisted of two independent bedrooms with their bathrooms, a common living space for dining and cooking, a wedge shaped yard with an oblong pool and an exterior staircase that leads to a small balcony/canopy, with a circular skylight that brings light to the entrance of the house. 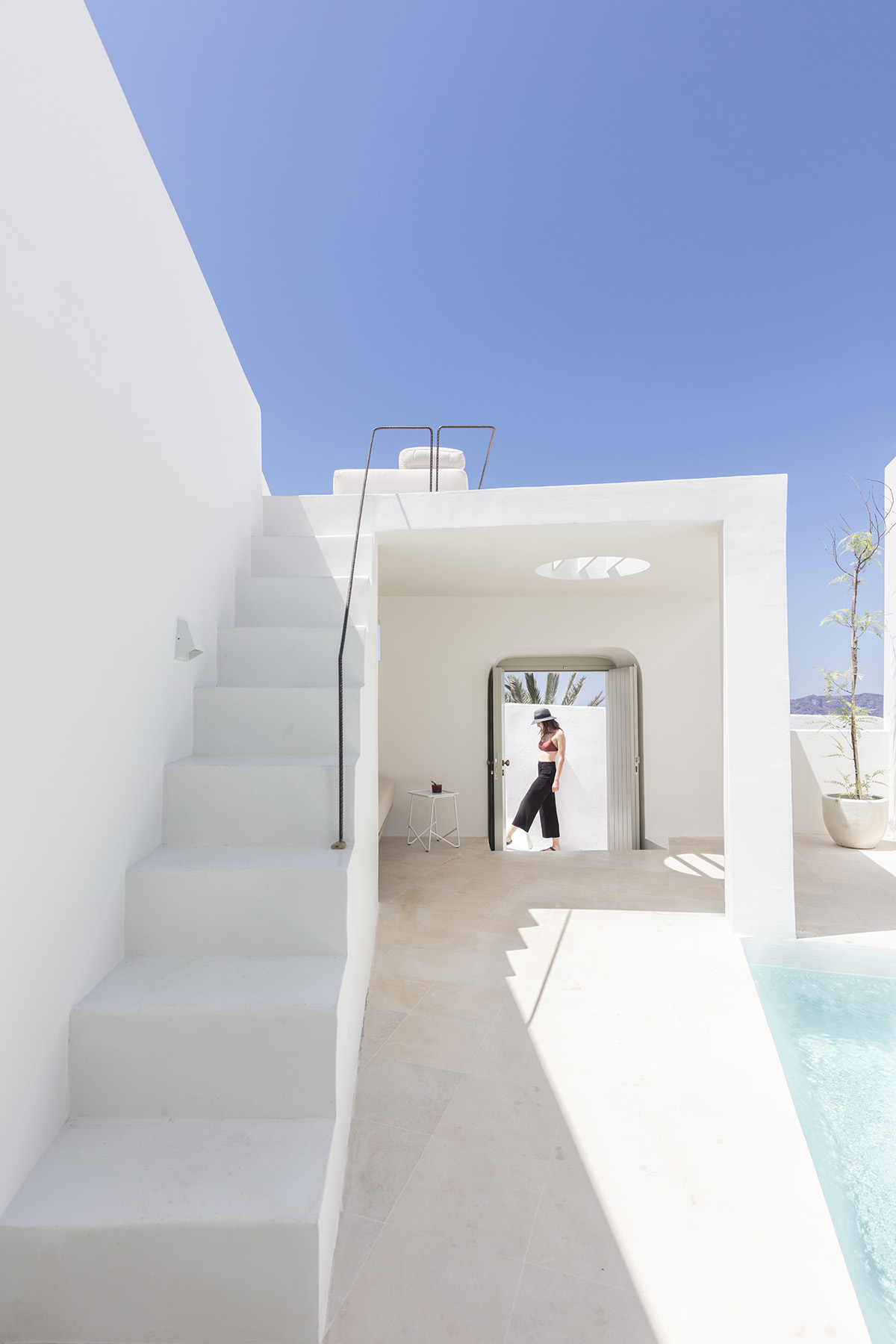 The old caves of the property with their exterior space consist the second summer house, that includes two bedrooms with their bathrooms, an open-plan common space and a hammam in the end of the biggest cave.

The walled yard which reminds a hidden patio has a lounge area for sunbathing, a protected vaulted pool and a linear exterior staircase which leads to the terrace with a view to the volcano and a dining area. Planted steps are running next to it. 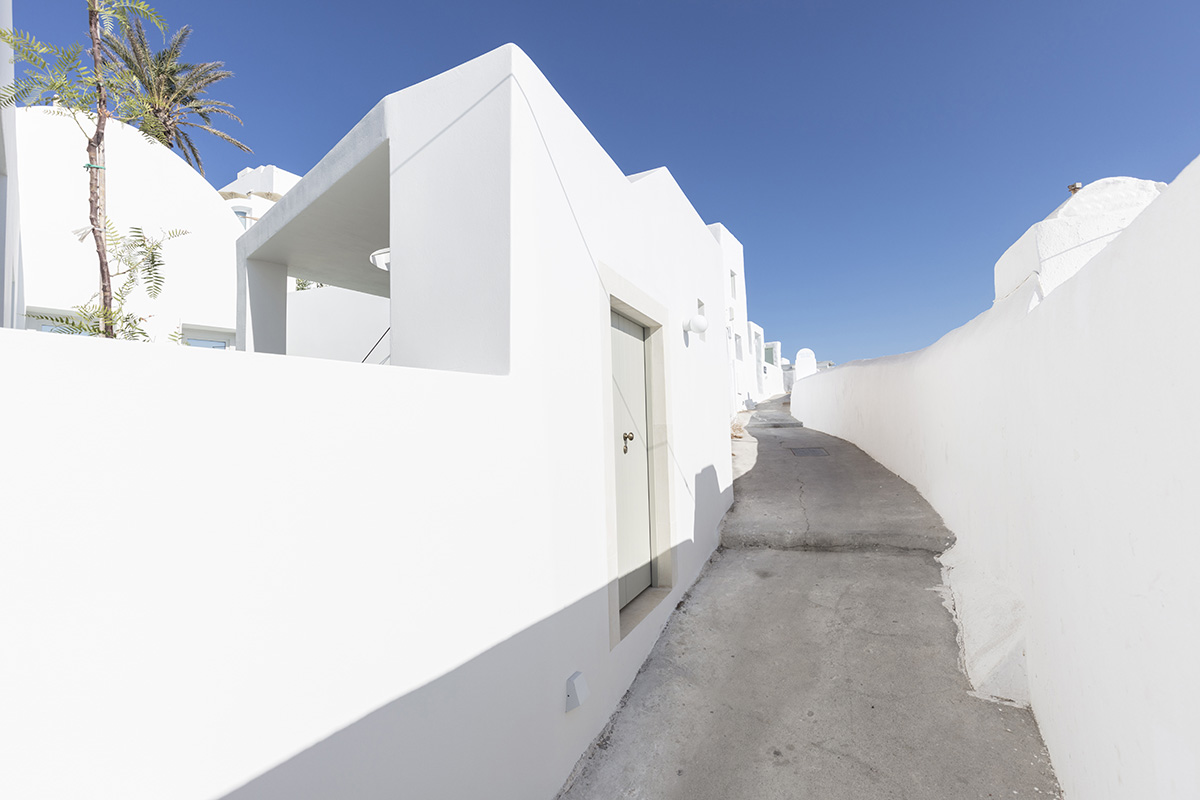 The outer shell of both houses, bright and white, is preserved as it was, in a way that is integrated with its surroundings and the cubistic, traditional architecture of the village. 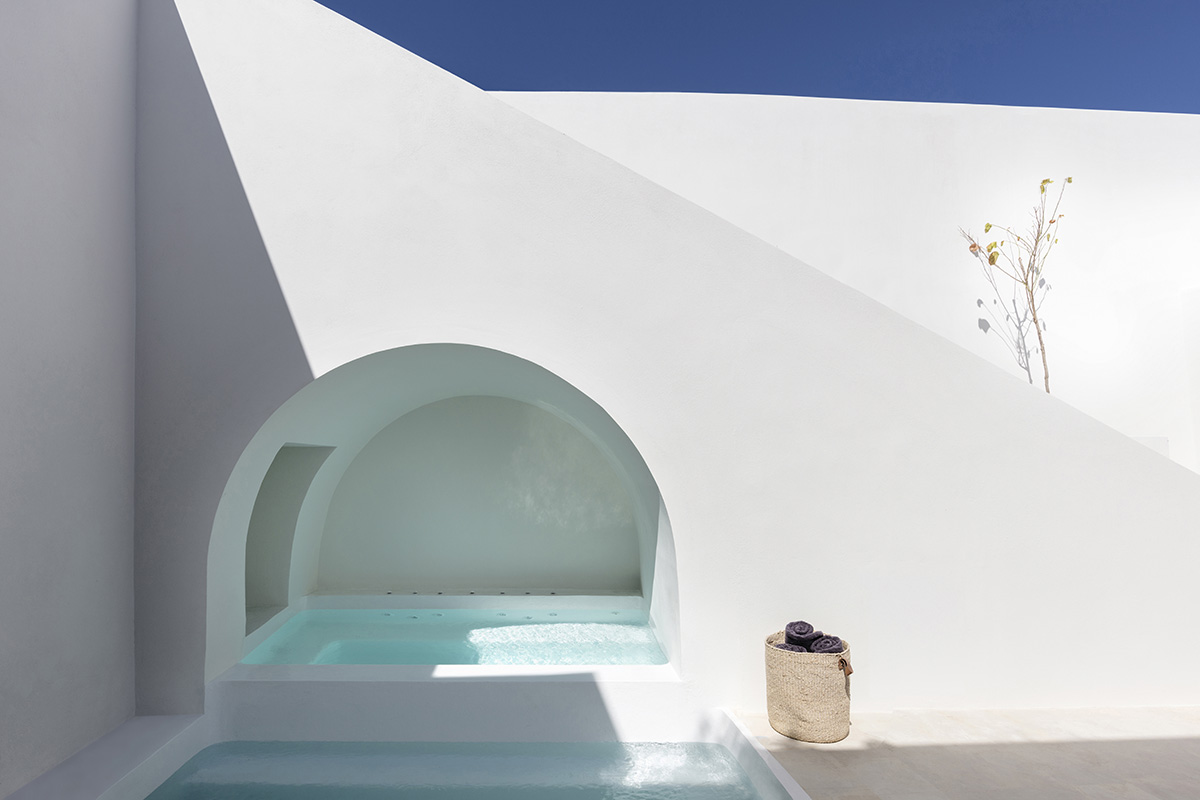 "The essence of the secret, protected courtyards is maintained as a basic architectural element which pre-existed, as also the entrances from the pedestrian, parts of high walls that encloses the yards, hiding the happenings of the patios. The enclosed yards continue to be the real heart of the houses and a transition point for them," said the studio.

"However, the interior spaces of the two summer residences differ from the exterior form, due to the fact that they preserve a sense of old and showcase the patina of the time passage. As a result, the use of earth tones materials and colours and the selection of furniture, serve that purpose." 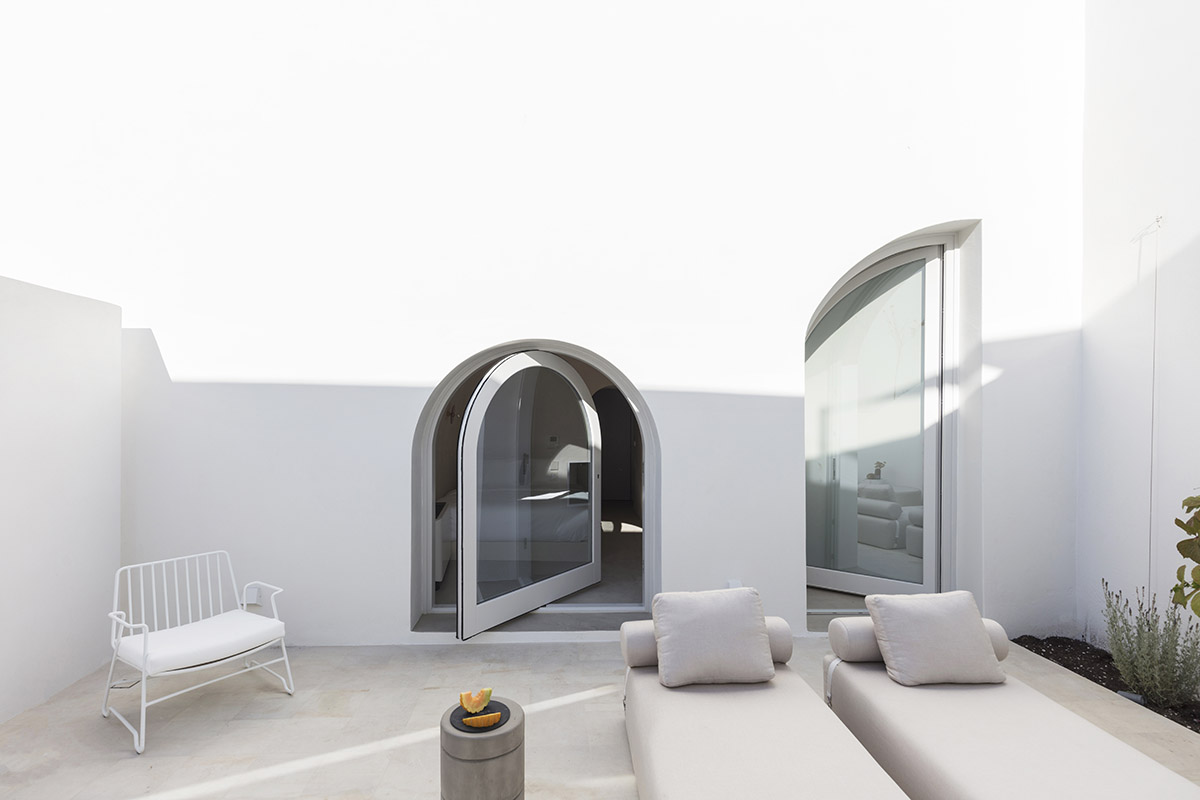 The clean geometry of the first house interior with its vaulted ceilings keeps its original form. In respect of materials, the floor is filled with local stones in squared shape, called "maltezoplaka" (being used in old churches and neoclassical residences), in off-white/ecru colour, the walls are coated with clay filled with peculiar tiny rocks, the furniture are made by local craftsman by wood, either oak or wood with deep, dim colours and there are few pieces of metal and glass that are chosen to complete the total synthesis. 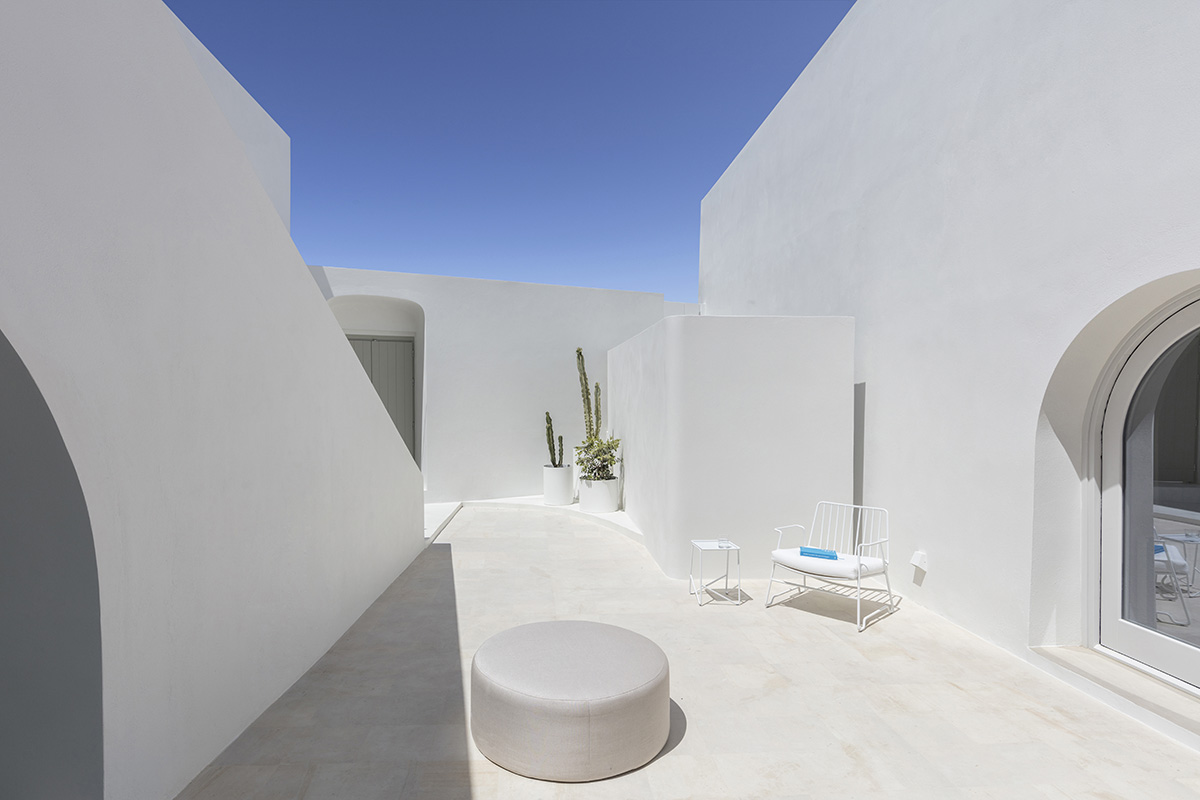 The purpose of the design was to create a natural, rustic space, not a mimic of the past life or a conservative approach of it, but a sense of space that reminds the way of living in the old days of the island in a classy, eccentric and eclectic twist, drawing inspiration from local materials and objects of the past. 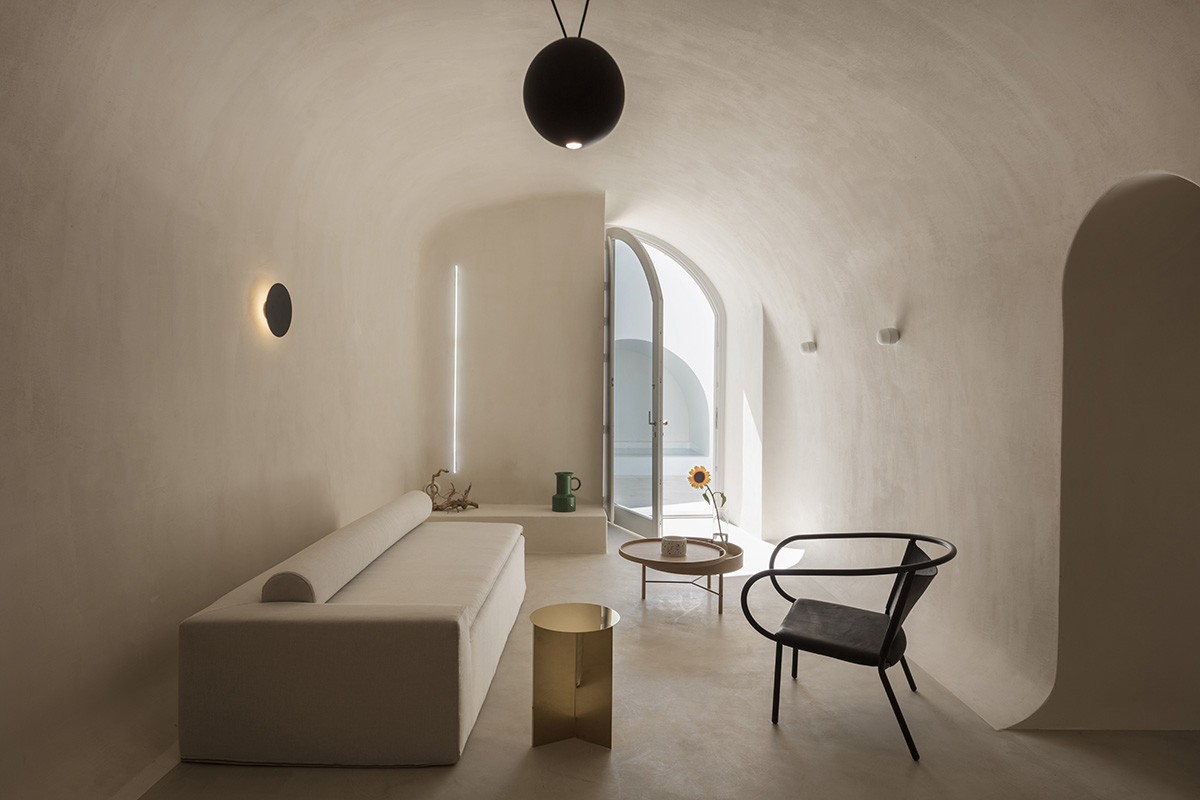 In the second house, emphasis was placed on its sculptural, primitive nature of it, in order the smooth curves of the caves to be shown up. The use of similar colour palette and materiality onto the floor and the walls, made by cement mortar and refractory mortar respectively, forms a continuity of the interior space bringing out the curves and the random forms of the cave. 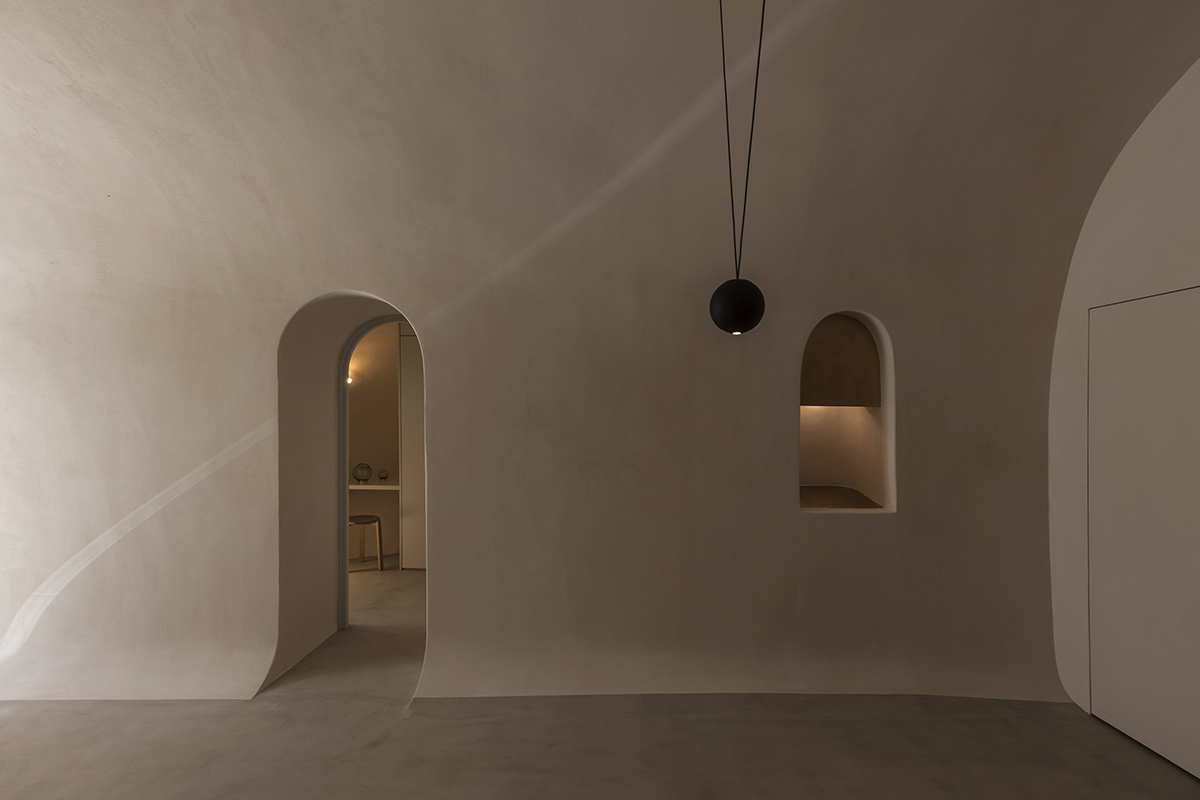 Most of the furniture are built in order to become a part of it. The rest of the furnishing are made by materials in the same pale colours, with some few exceptions of shiny gold or silver metal furniture, the use of black leather, neon light, black metal lights, deep dark wooden sphere as light, pink and blue transparent glasses, etc. that contradict to that mild, subtle base and give a spark of uniqueness. 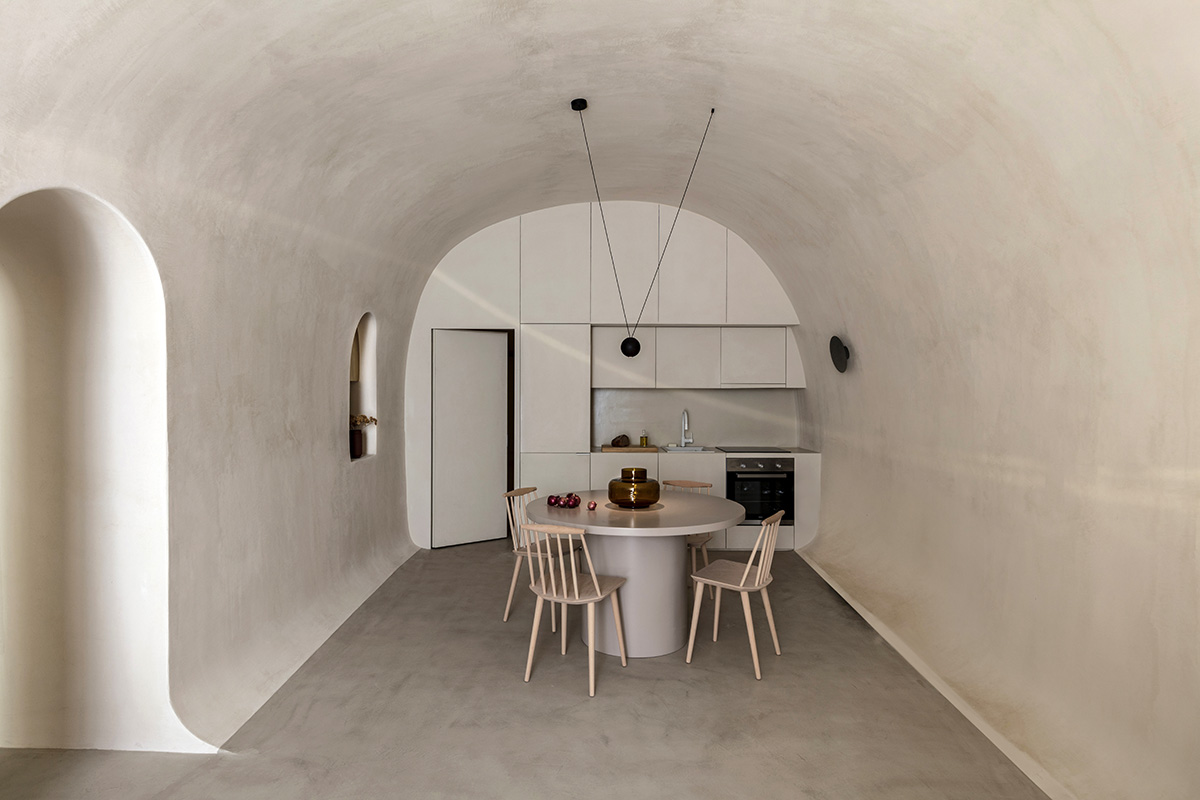 Both houses experiment the design possibilities in the existing spaces, with that certain qualities, such as their scale, the elongated typology, their different forms of their vaulted ceilings, the amorphous carves that someone can meet, the fact that they are part dug into the earth and part outside, the singular façade, the limited openings, the lack of light in the depth of the space and the contradiction of the intense light of the exterior, and how these spaces can be developed, keeping their sensuous and mystical character but pointing in a sense of natural, unavoidable fading of time, a sense of an old island life nowadays. 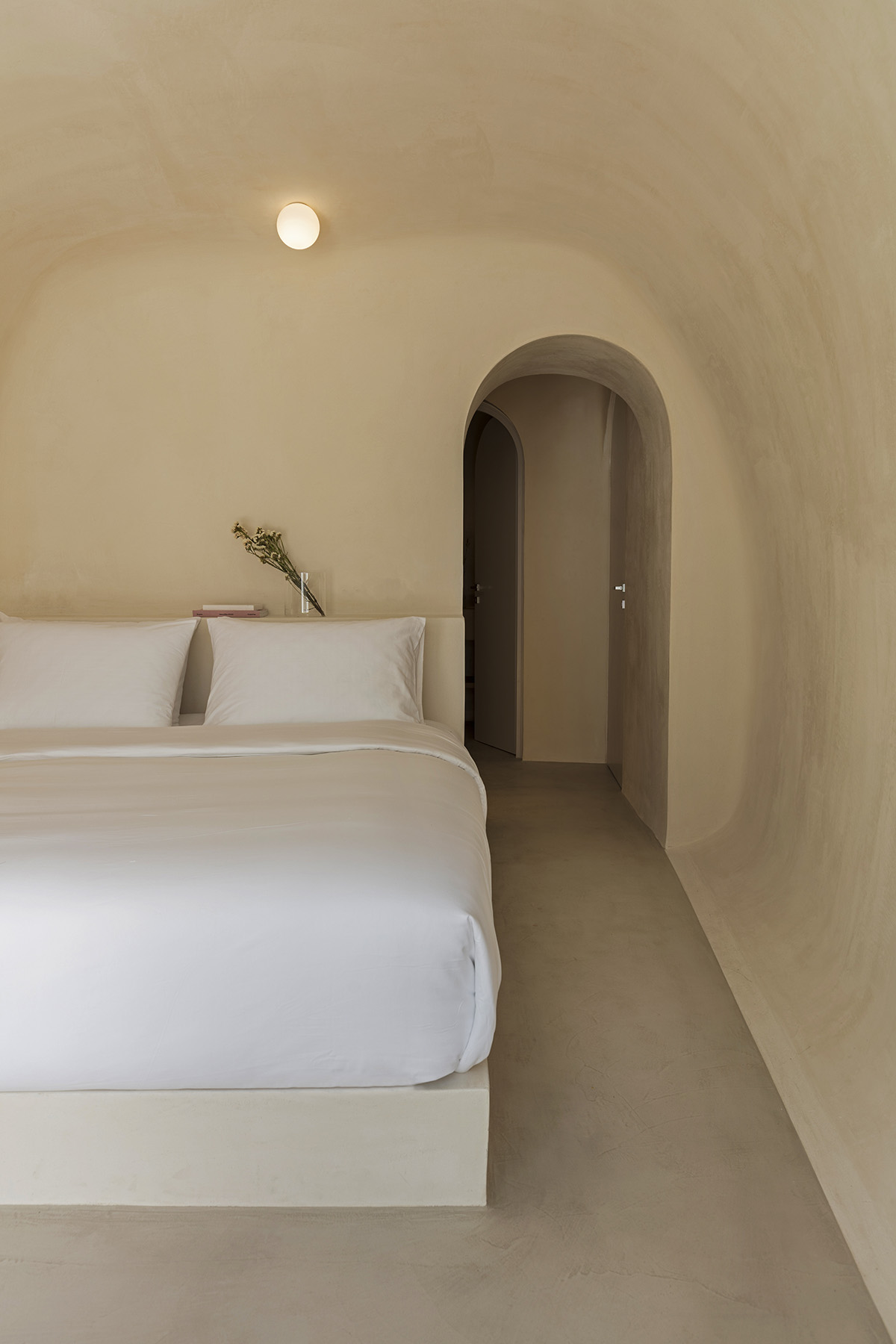 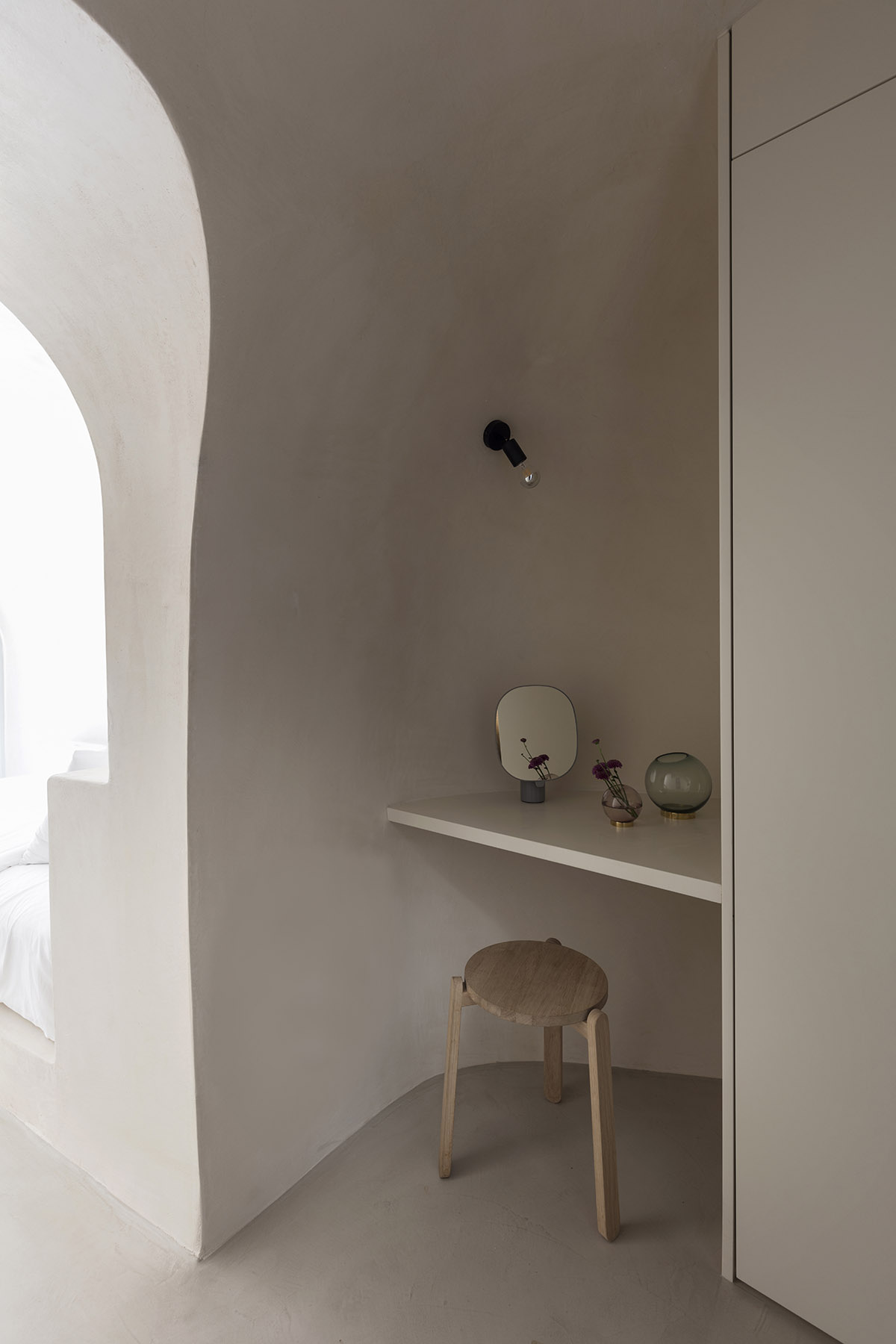 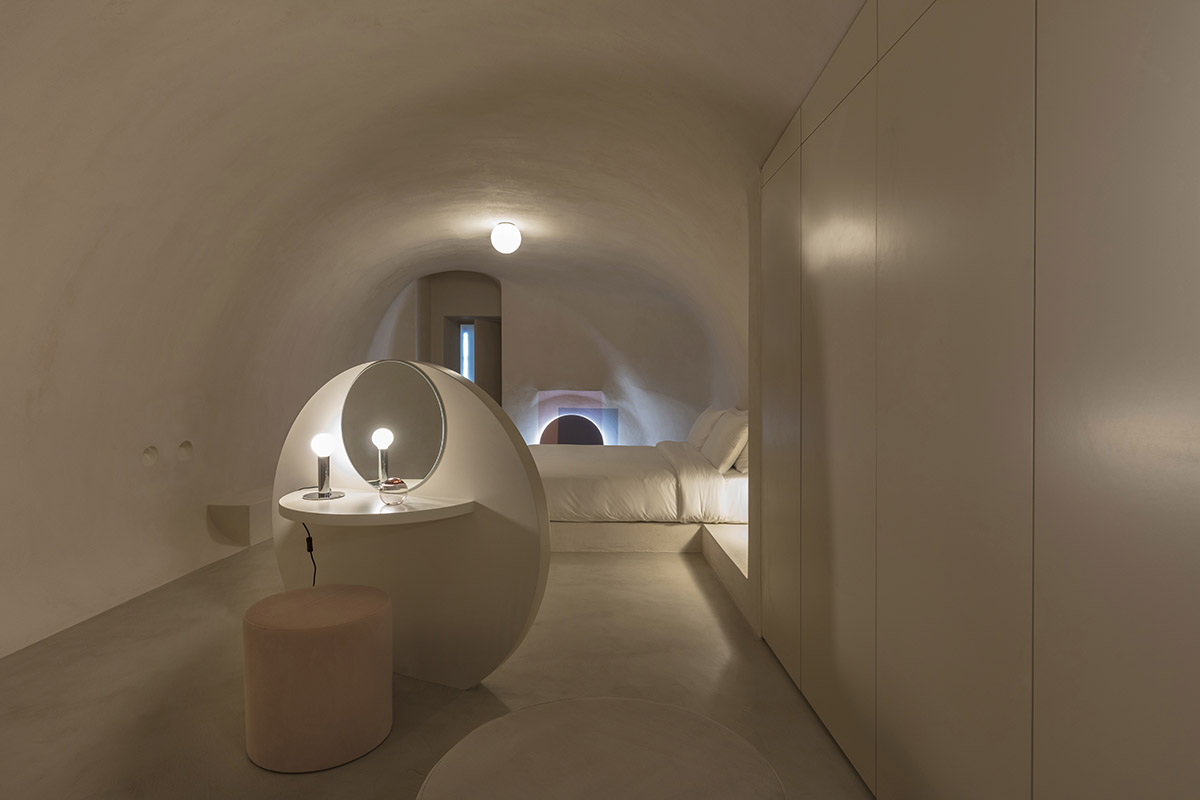 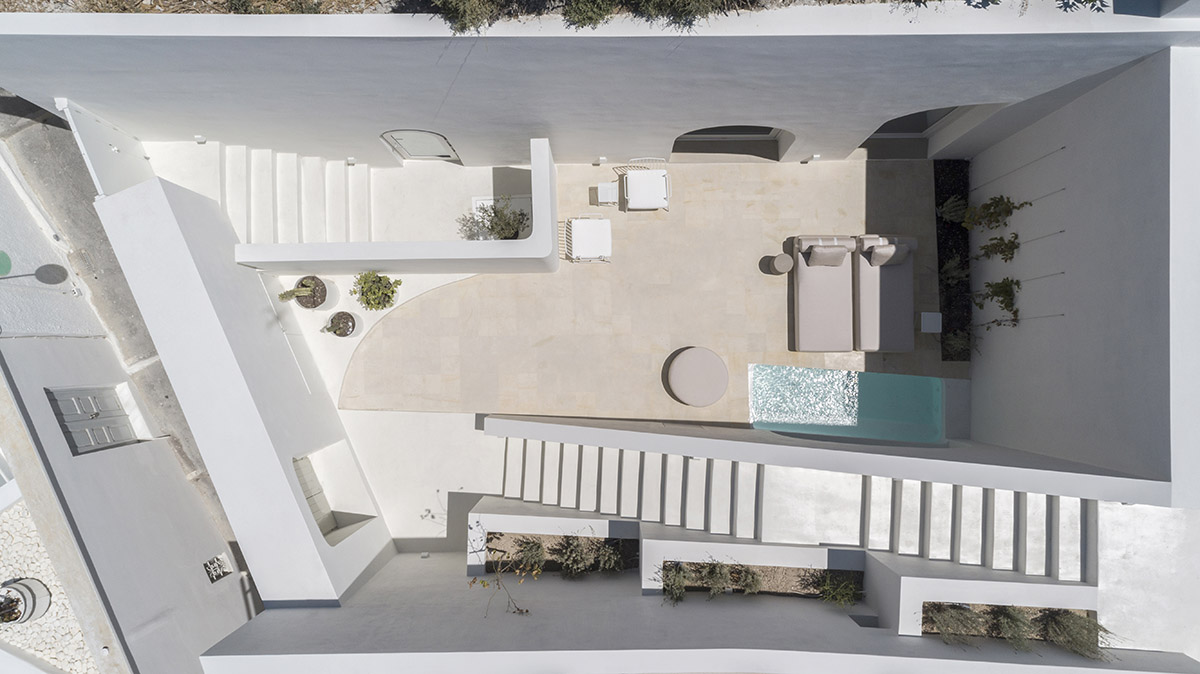 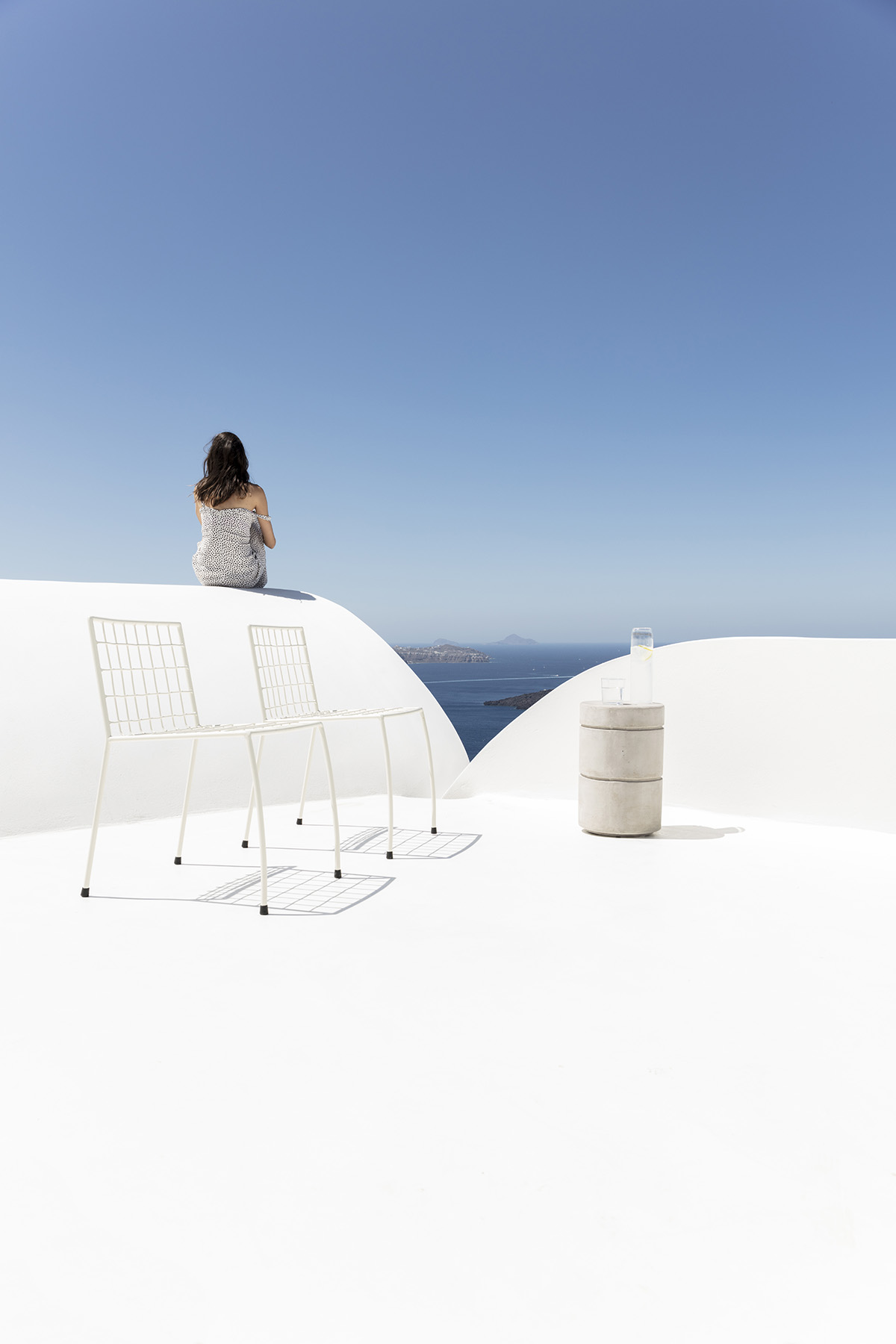 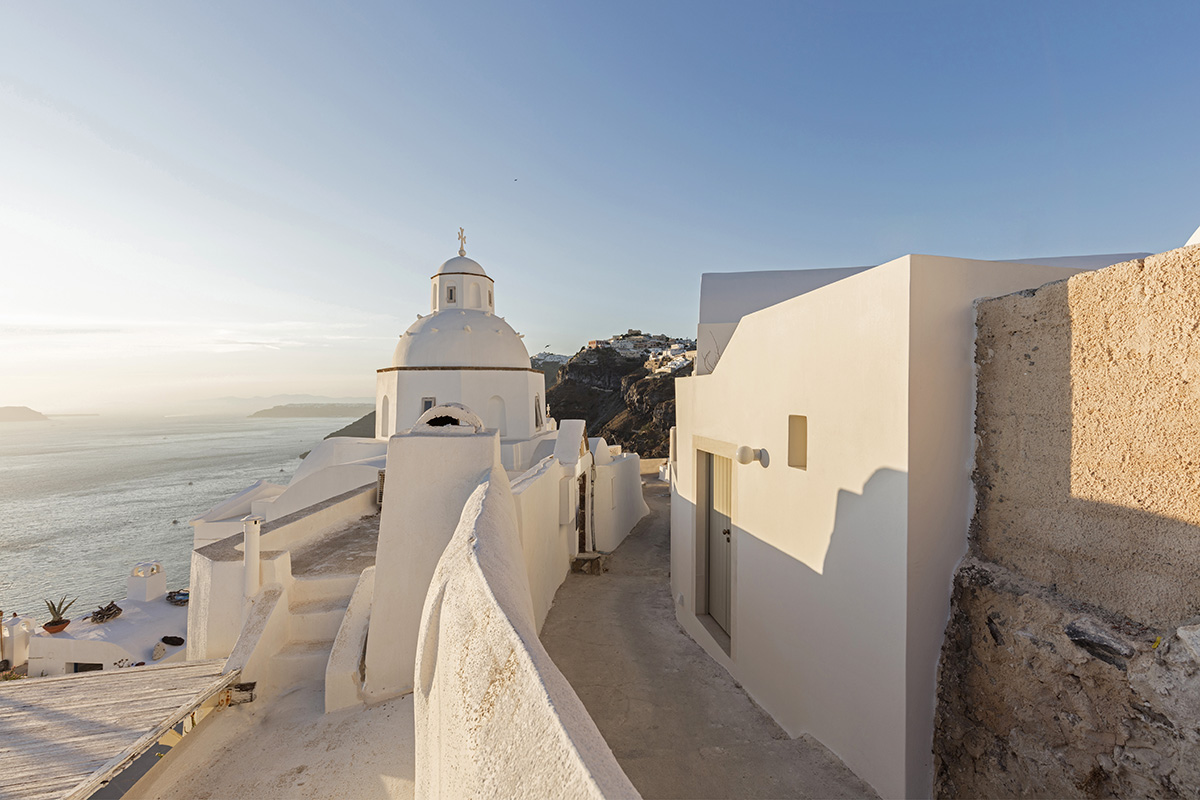 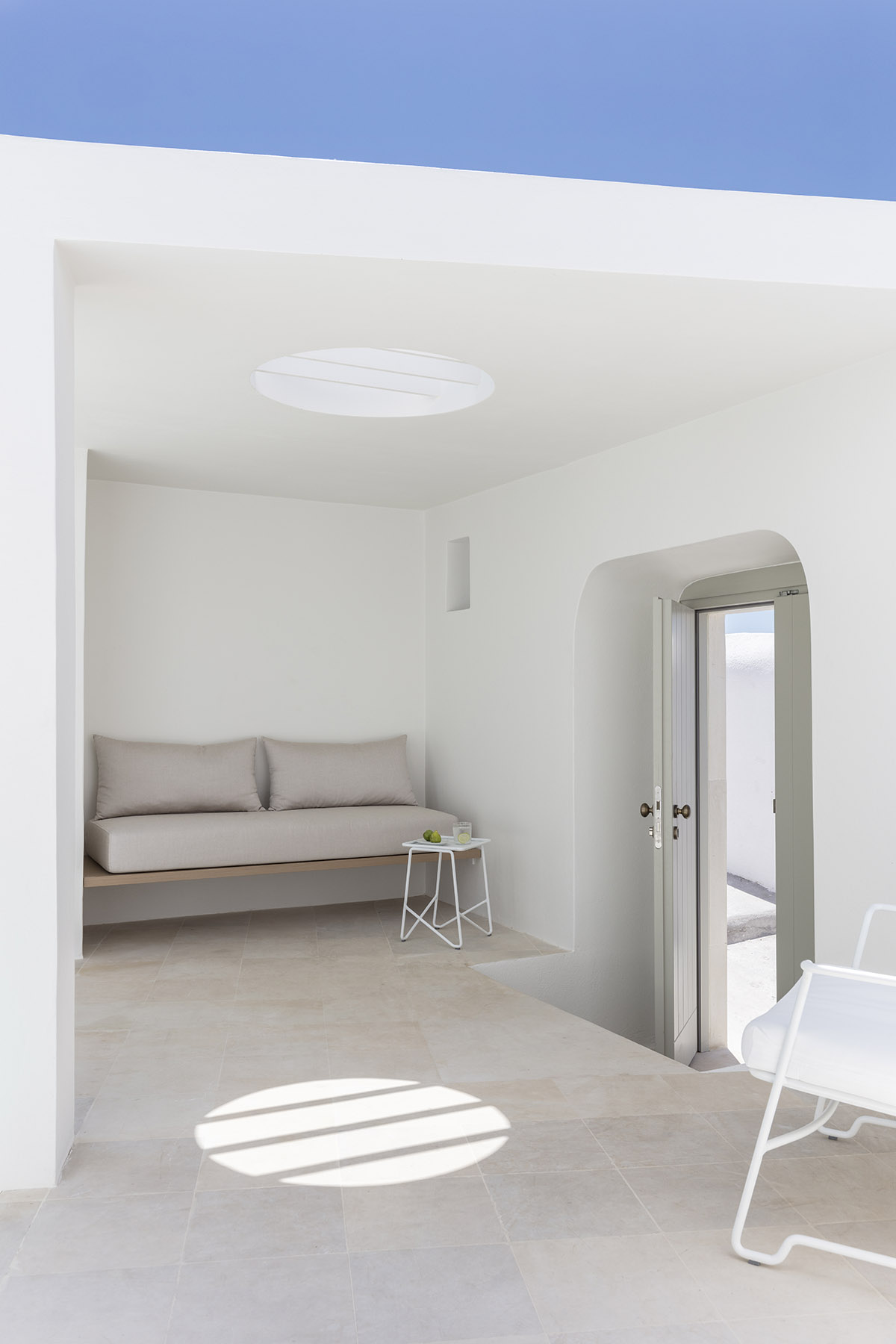 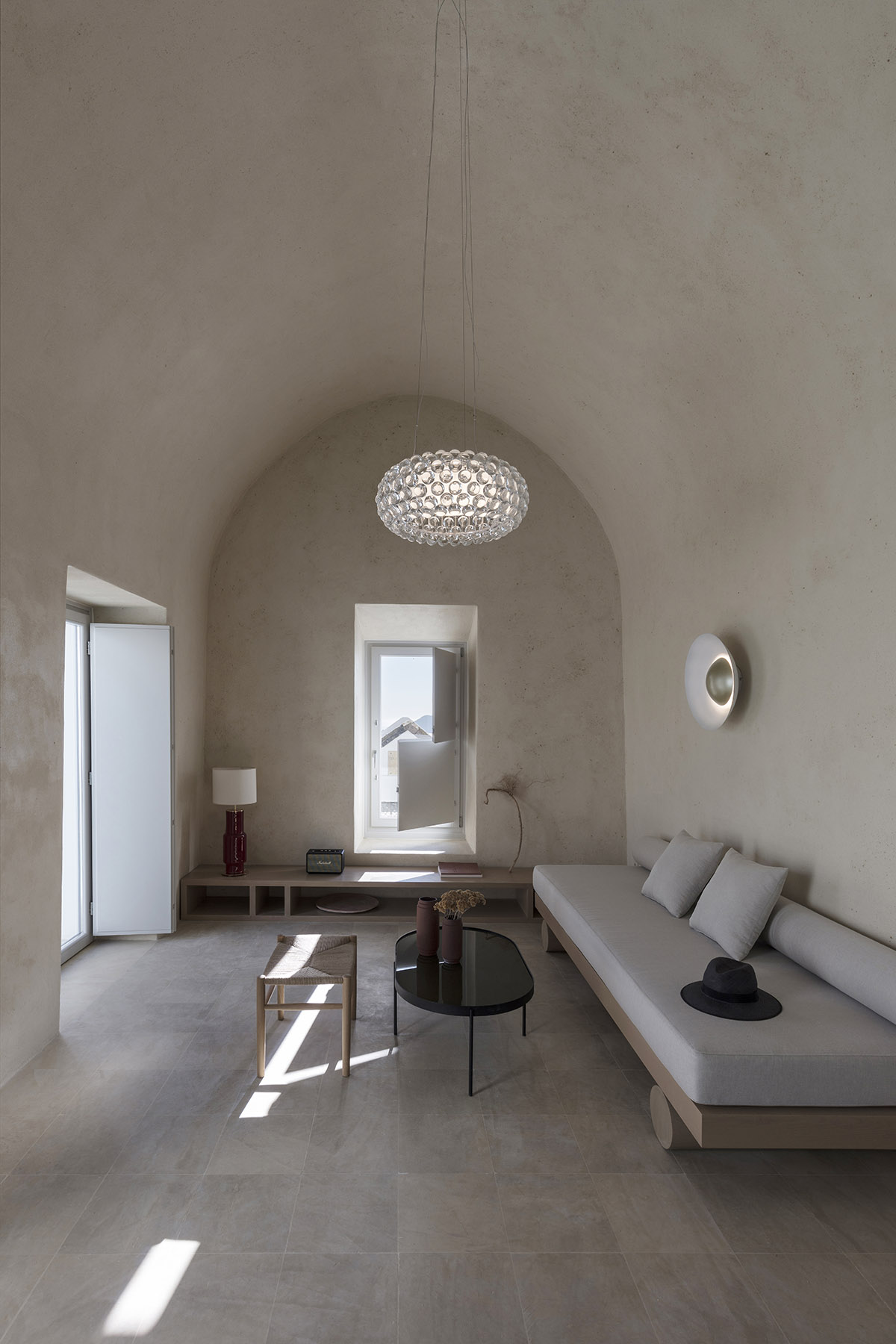 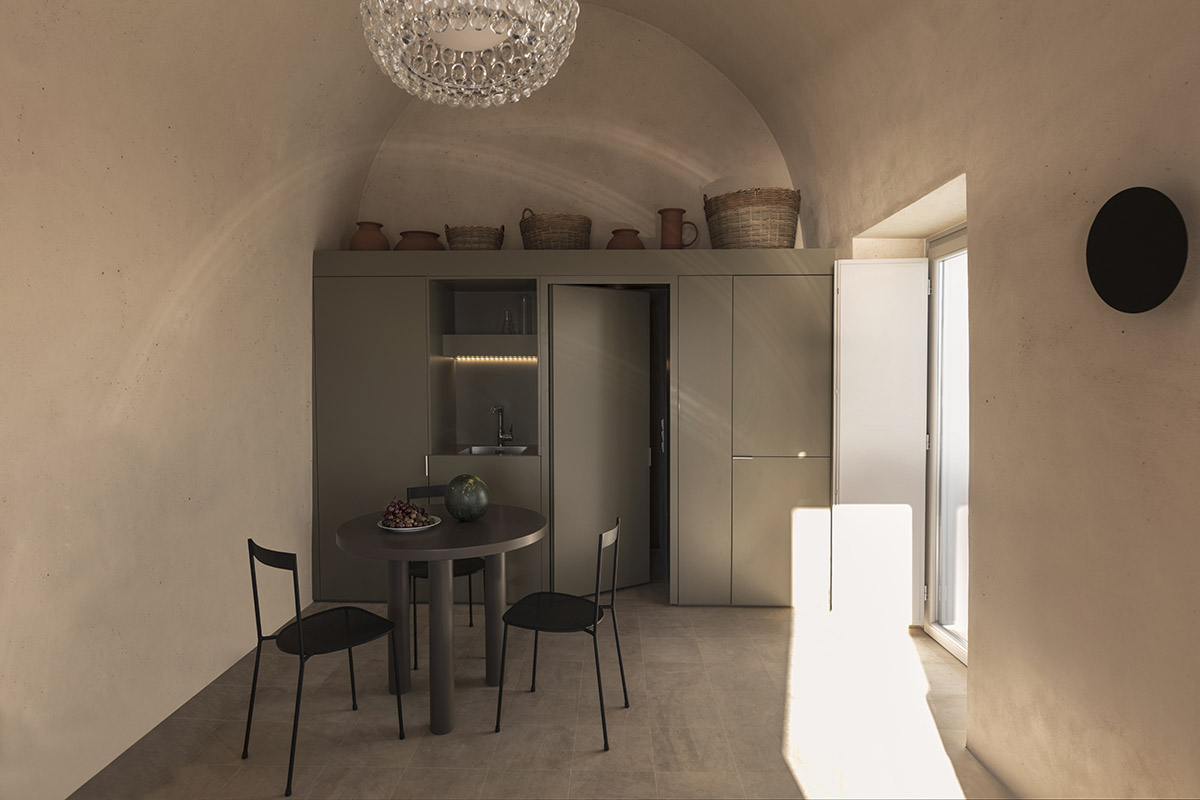 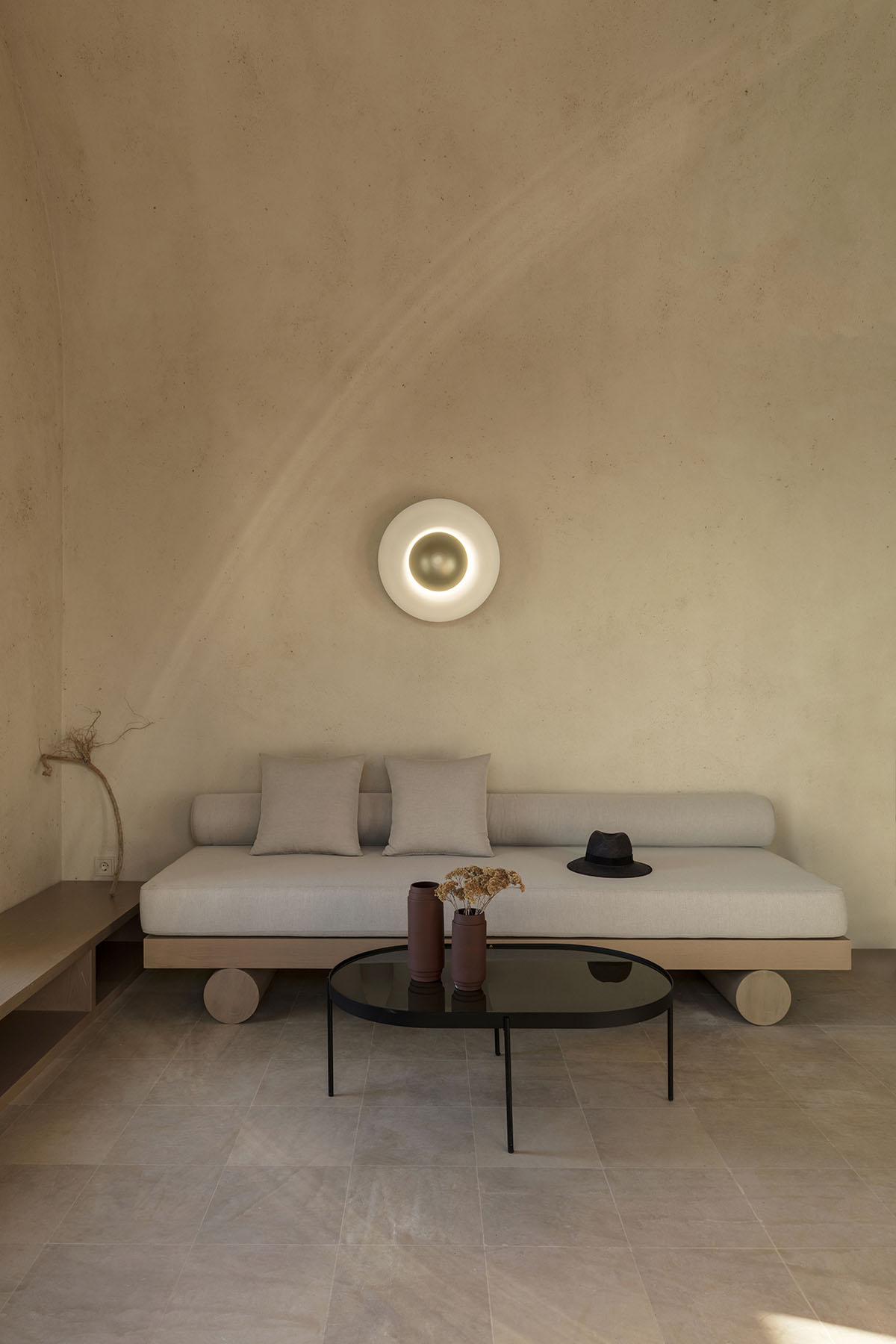 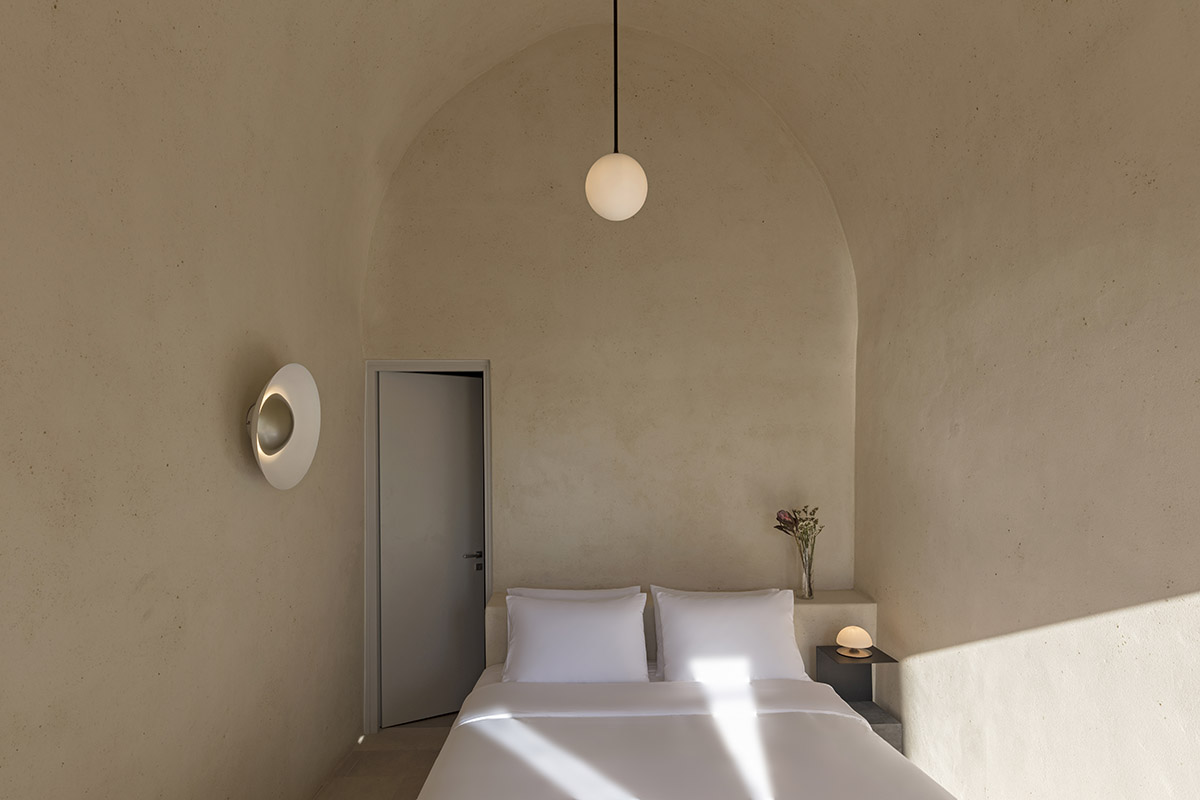 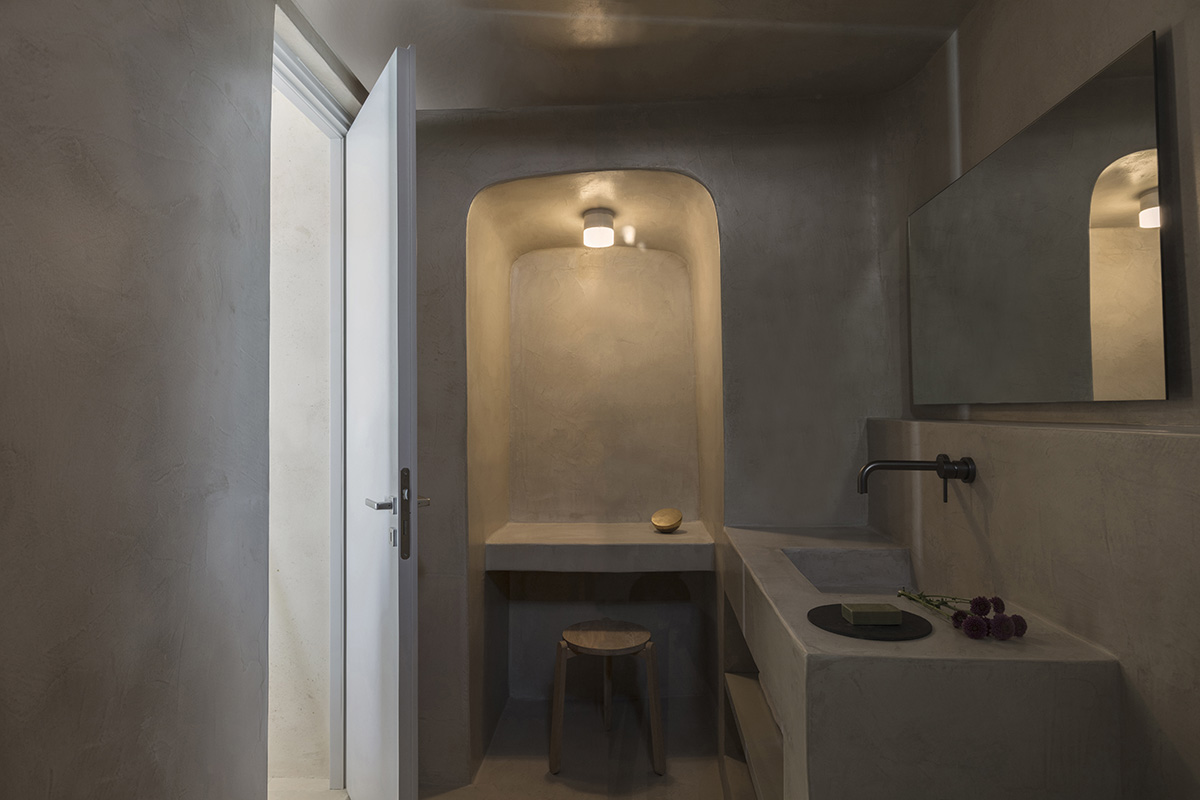 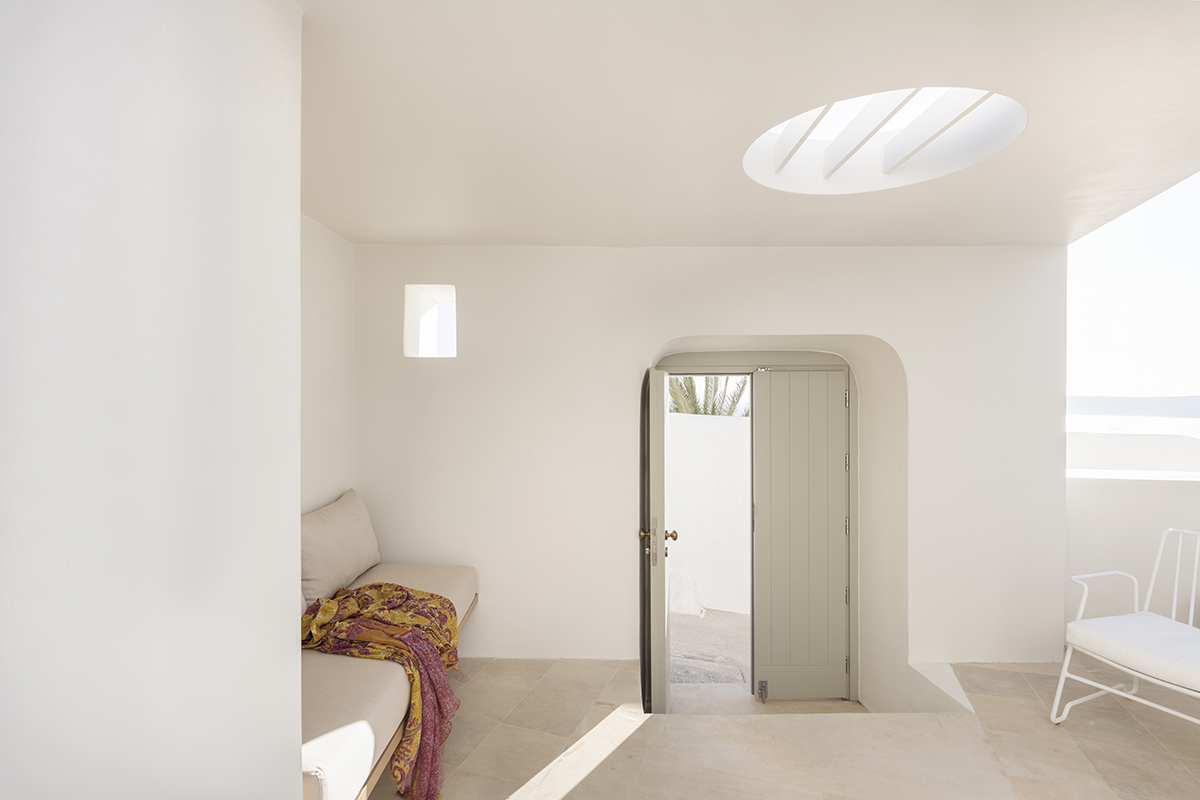 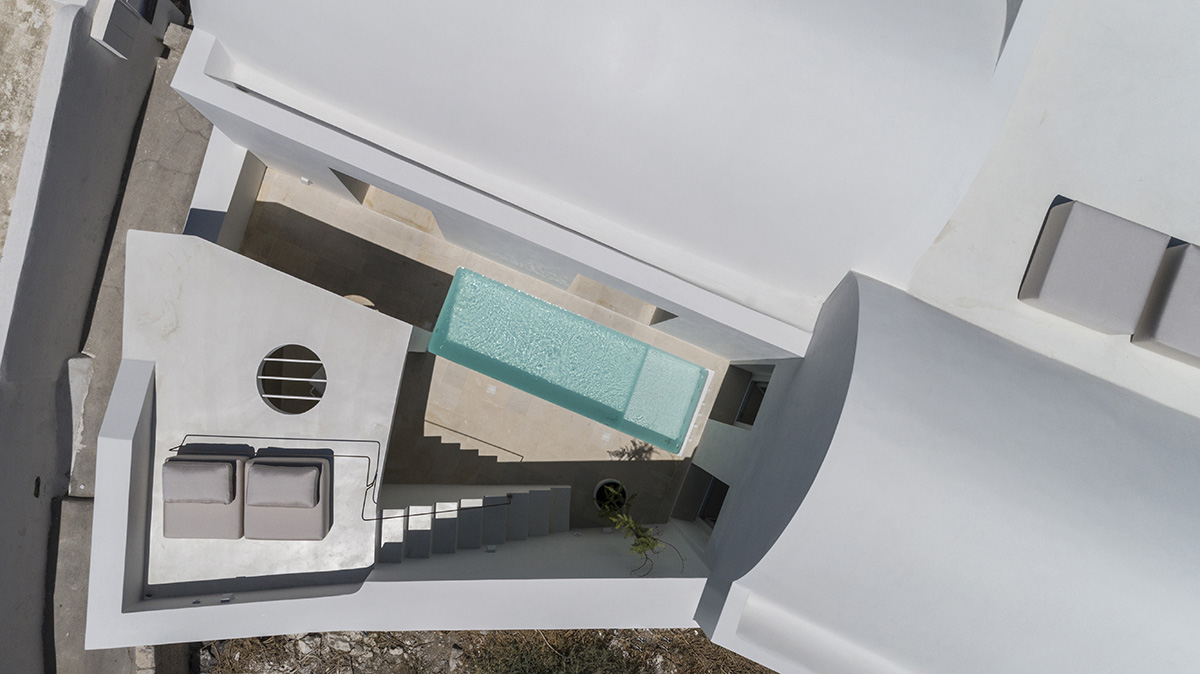 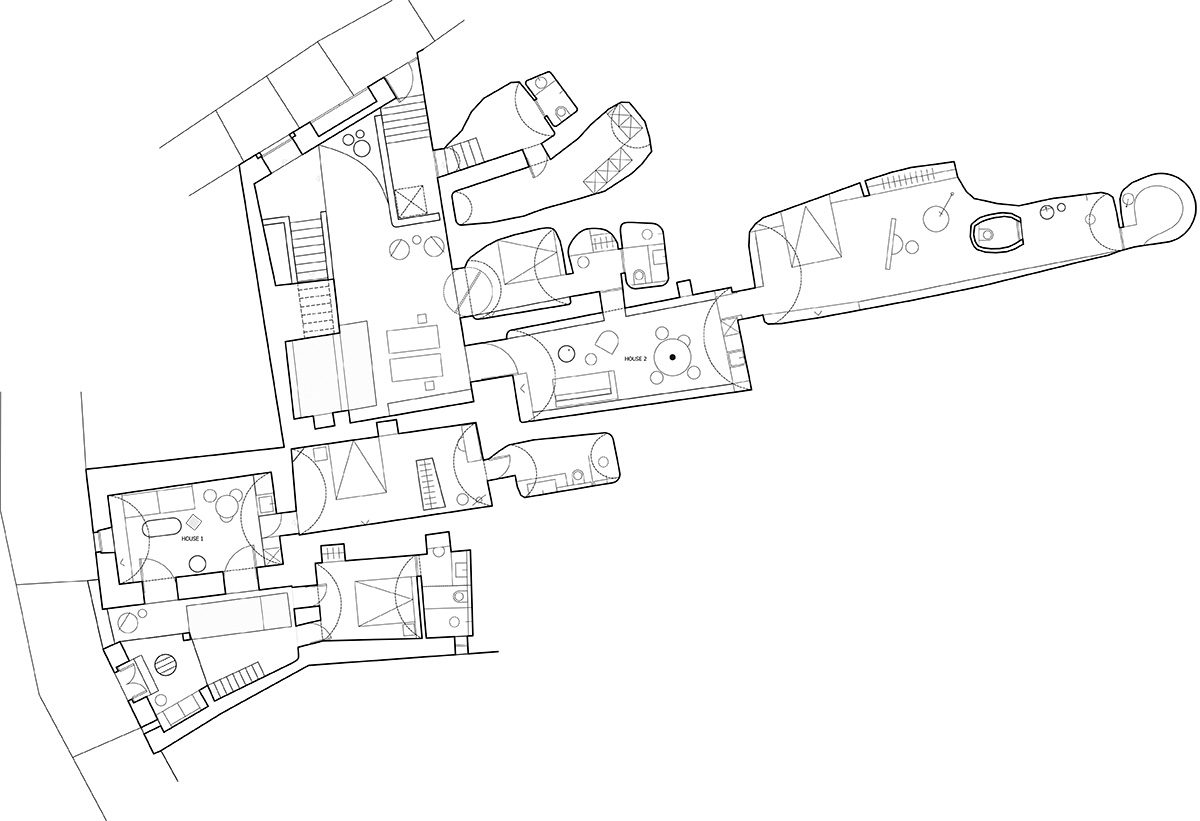