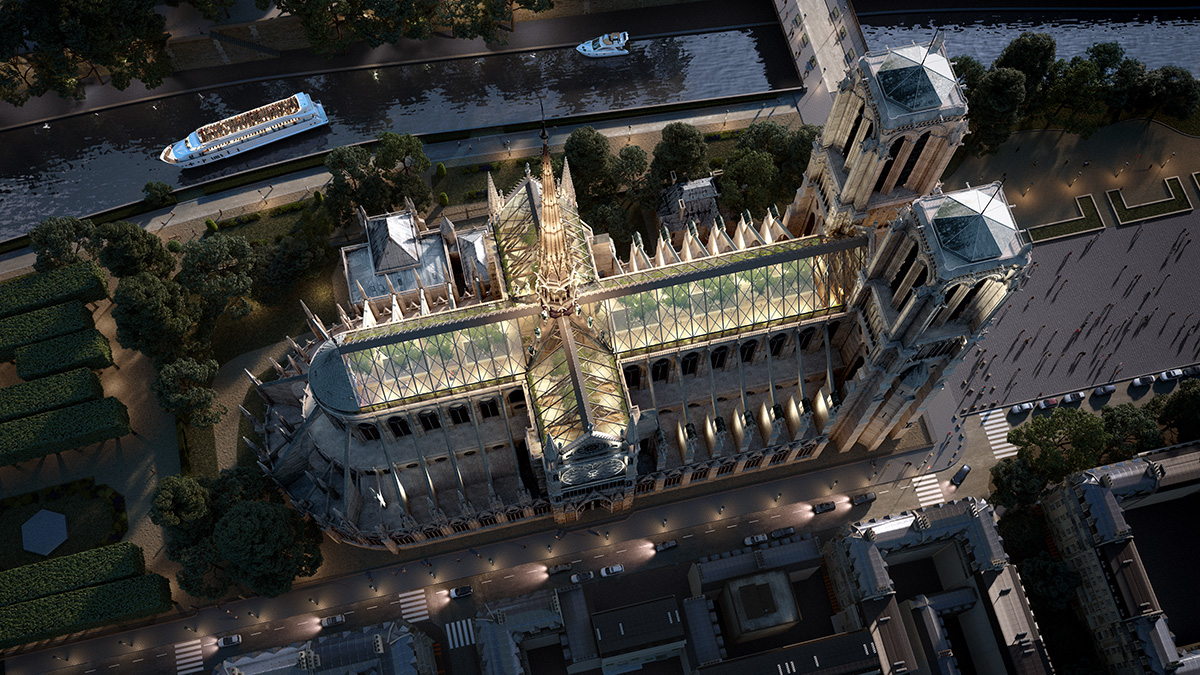 Belgian visualization design studio Miysis has reimagined the roof and spire of the Notre-Dame Cathedral, following the news that the France government will launch an international competition to design a new spire for the cathedral.

The studio proposed a fully-glazed roof that could respect both the original style of this iconic building, but that at the same time would also be representative of our time.

Releases with a set of images that show the cathedral in every climate, the proposal is envisioned to preserve the dimensions and volumes of the original roof, with an almost unchanged exterior aesthetic. 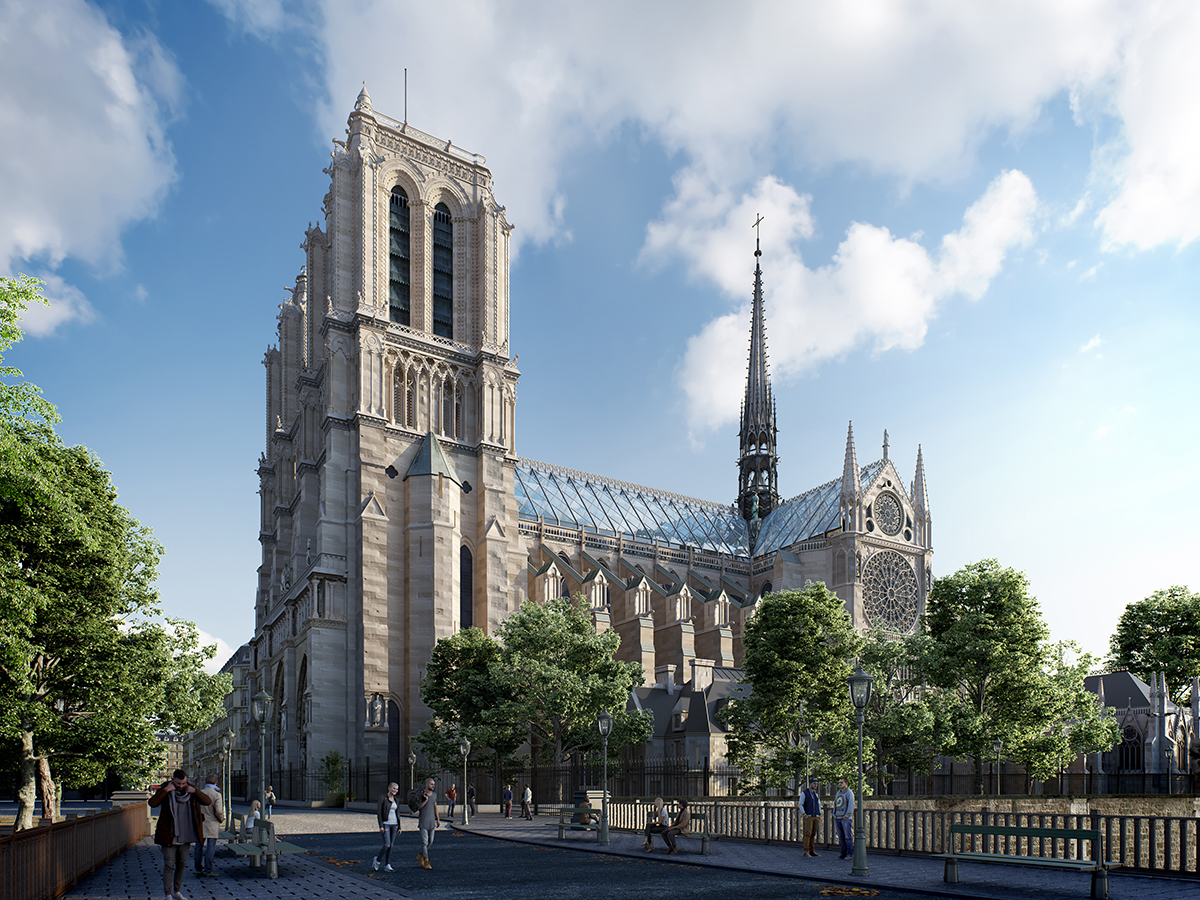 "Our images have no other objective than to transport you into an alternative future, which will probably never become," said Miysis in its project description.

"A positive and inspiring future, respectful of the environment, that does not hide the history of Notre Dame, that accepts the ravages of the flames and that, from the ashes, sees the rebirth of this church, a little different and even more welcoming."

"The setting up of a canopy taking up the rhythm and position of the original frame seemed interesting to us, this one, seen from the outside, takes the form of stained glass, while conferring a very simple aesthetic, close to the original roof." 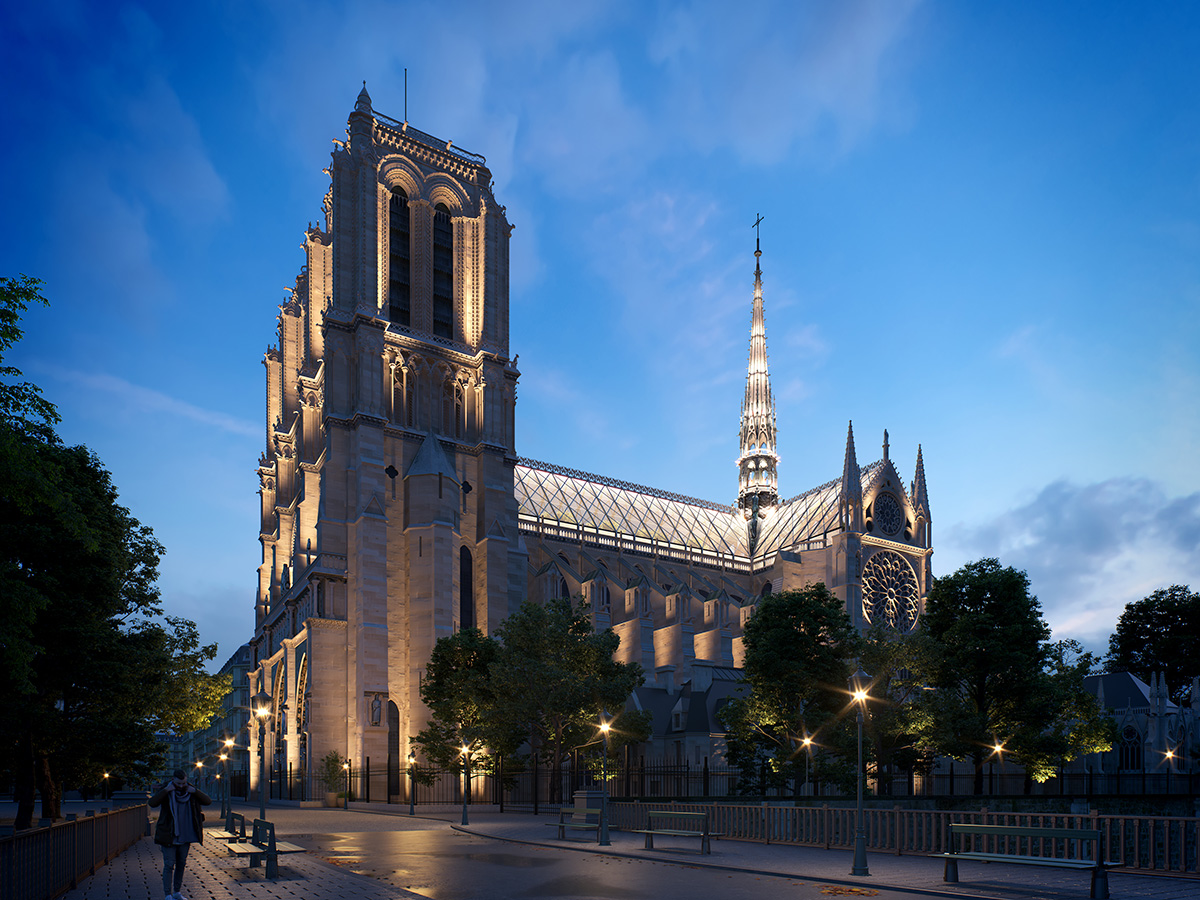 The studio created a space that respect to its original past. During the fire exploded on April 15, the roof of the Notre-Dame Cathedral was severely damaged and the spire collapsed. Miysis created a a new roof space accessible to visitors. 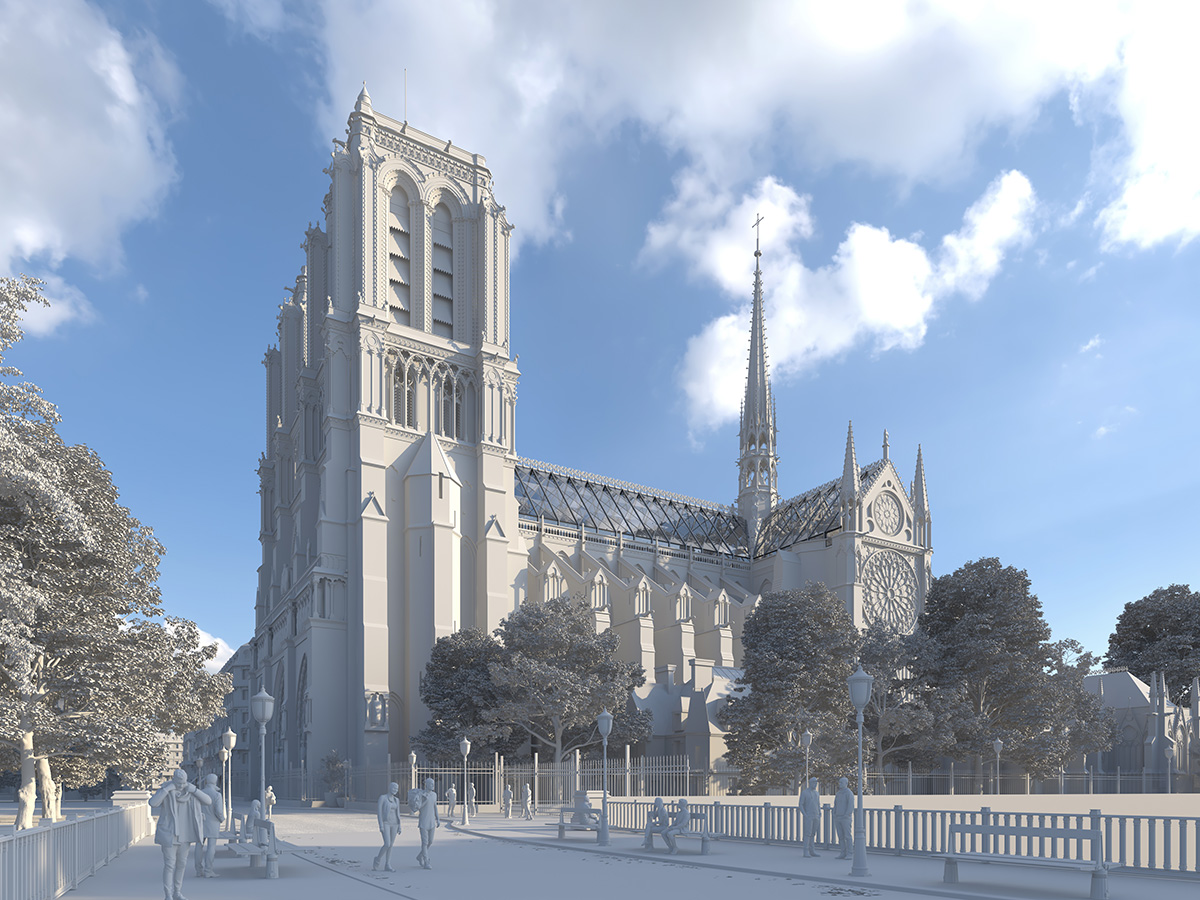 "They could walk quietly through the volume of the roof that Notre Dame intimates called “The Forest”. What could be more natural than paying homage to this place through a real vegetated space," said the studio.

The interior of the roof is filled with trees and seating places that allow visitors to spend time inside to feel the structure intimately. On the ground, the floor is reminiscent of the structure that has now disappeared. This same structure, some of which were reconstructed in the same way and took their symbolic place at the four ends of the roof. 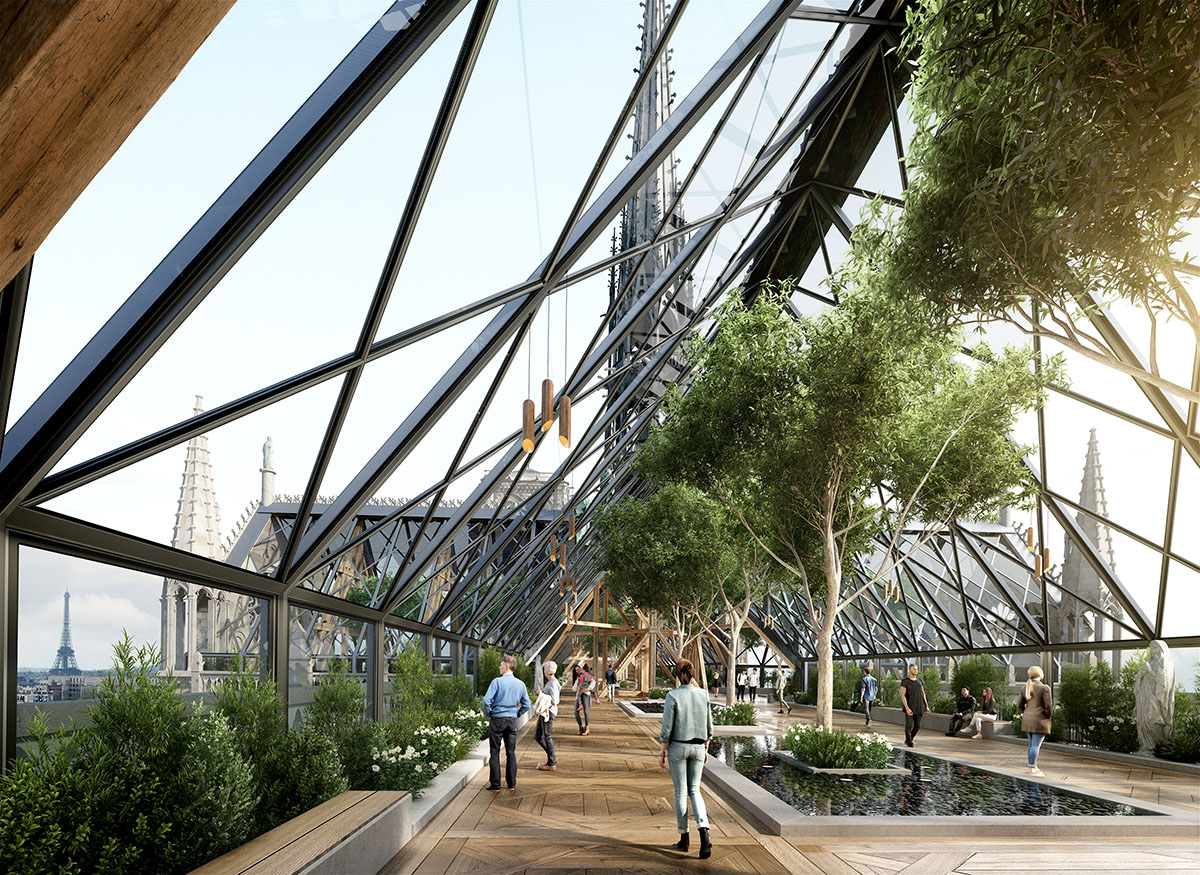 "We made the choice not to duplicate everything that was lost. Yet it seemed important to us not to deny the know-how that allowed the construction of a very complex wooden structure that had become mythical." 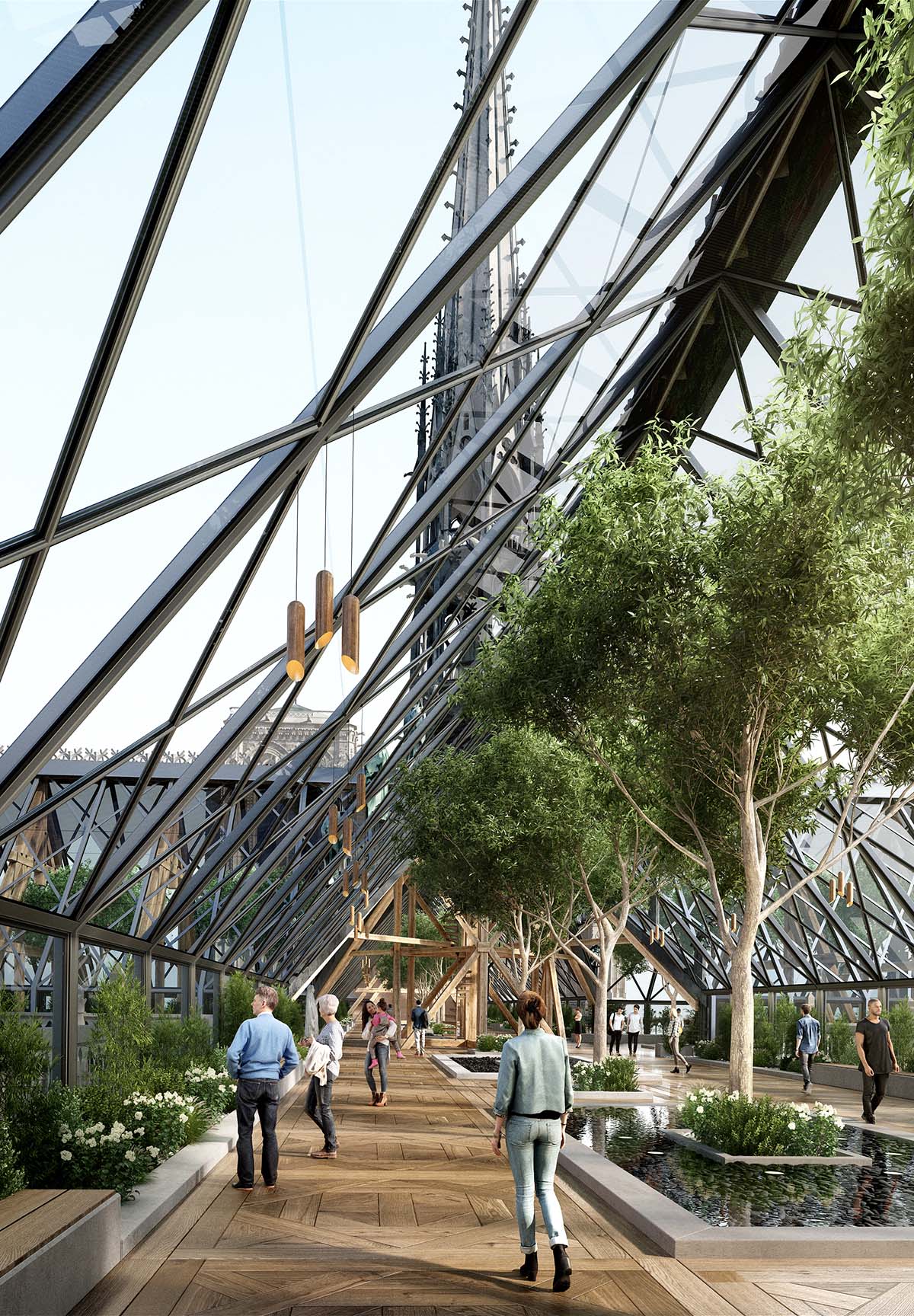 For the spire, the team proposed a spire design that almost evokes the original spire of the cathedral. Elegantly labored details, craftsmanship and material quality are almost carrying the traces of the original structure. 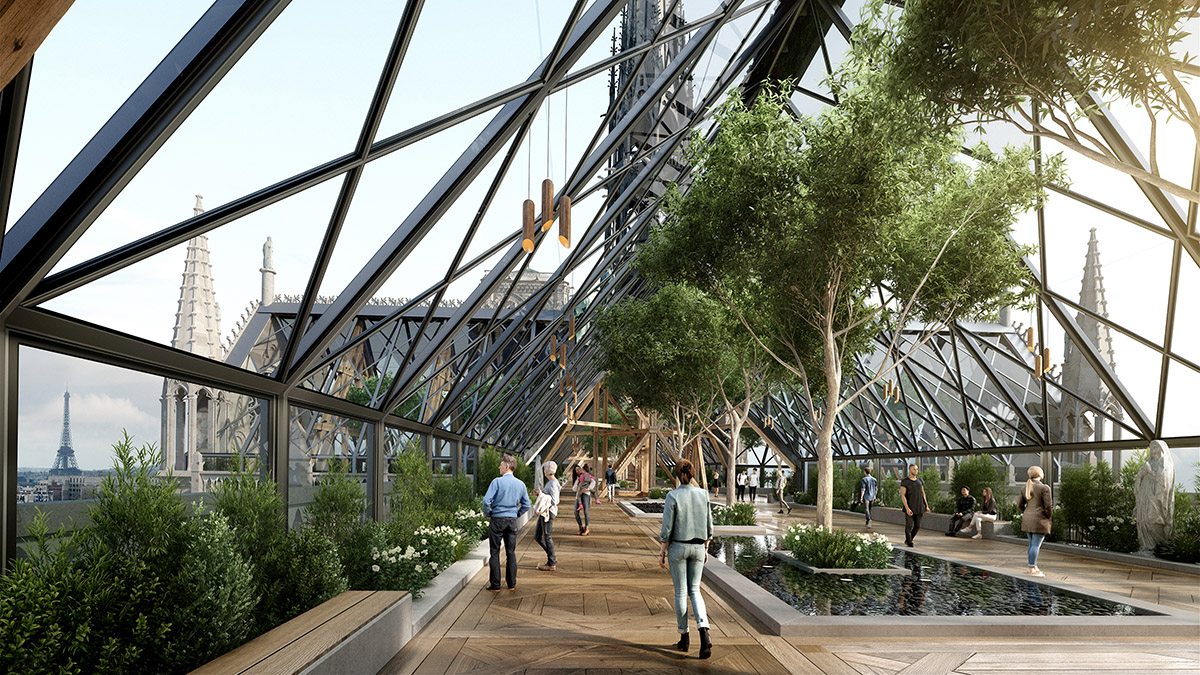 The studio designed an arrow in the center of the building. "Reconstructed identical, by the best craftsmen, dressed in more modern materials and whose appearance is undeniably faithful to the original," explained the studio.

"An arrow that found the colossus that accompanied her for so many years and were miraculously saved. This arrow, iconic, will have regained its place and will now be illuminated, highlighted as never before in its history..." 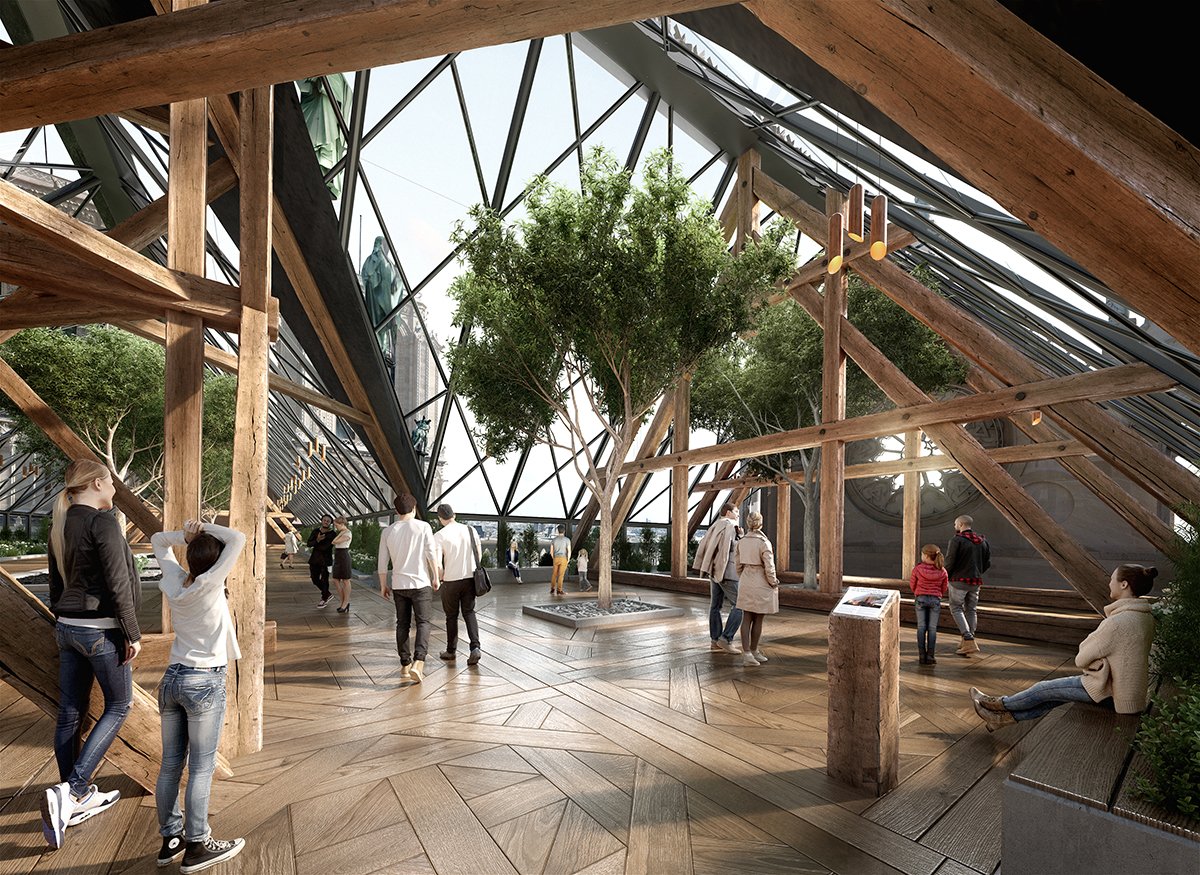 The reconstruction of the cathedral is still a controversial issue. Heritage experts and art historians warned that the five-year restoration deadline is impossible and it can be more complex and could take a decade or more, despite President Emmanuel Macron’s statementto "rebuild the cathedral even more beautifully" within five years. 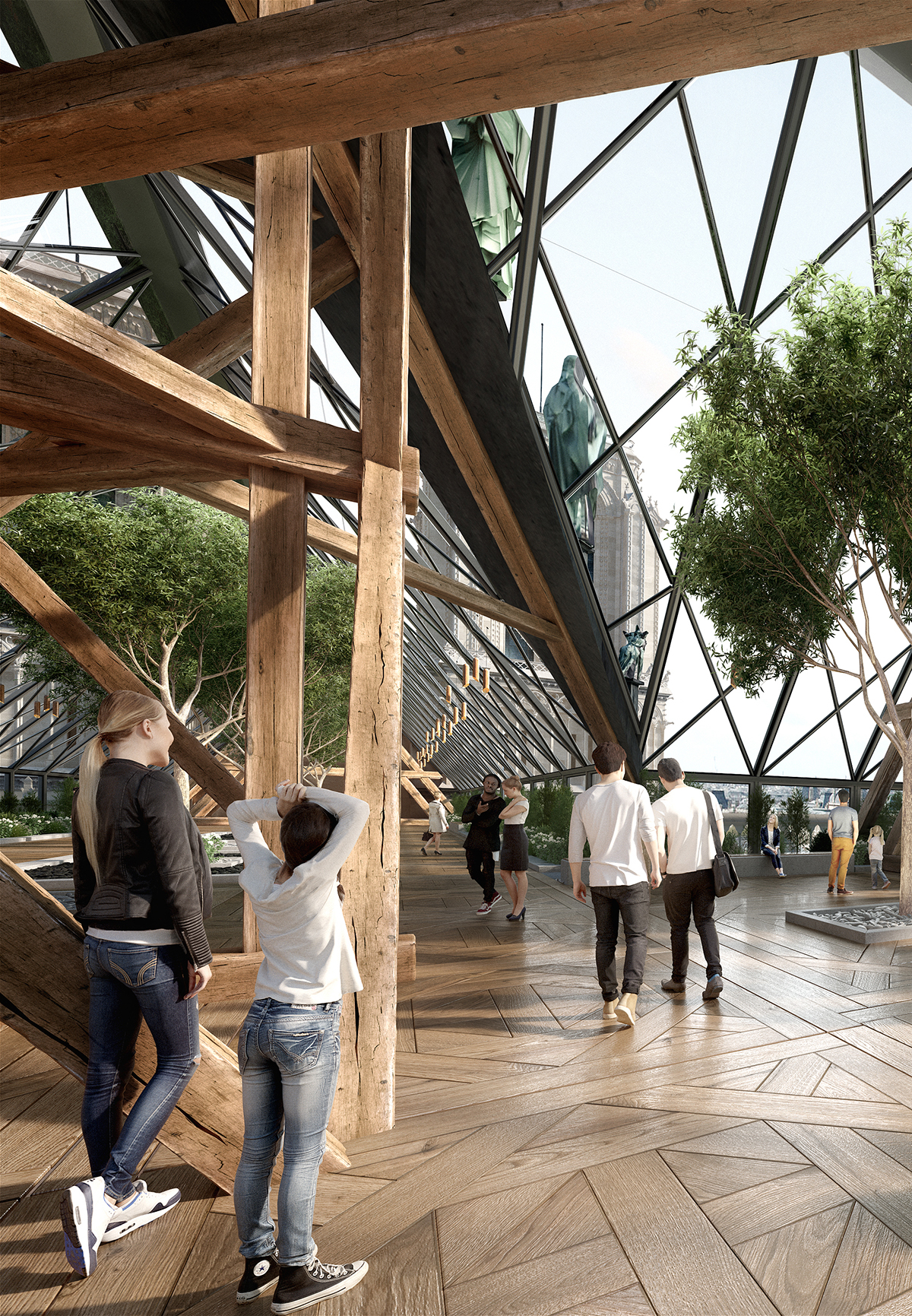 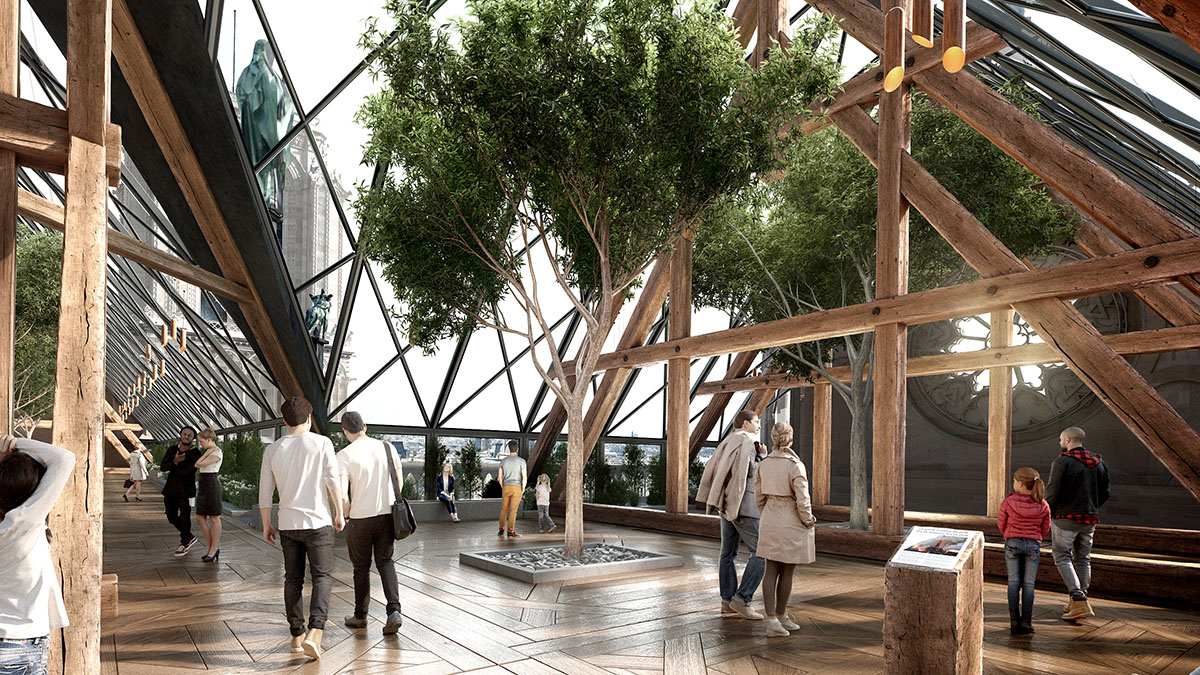 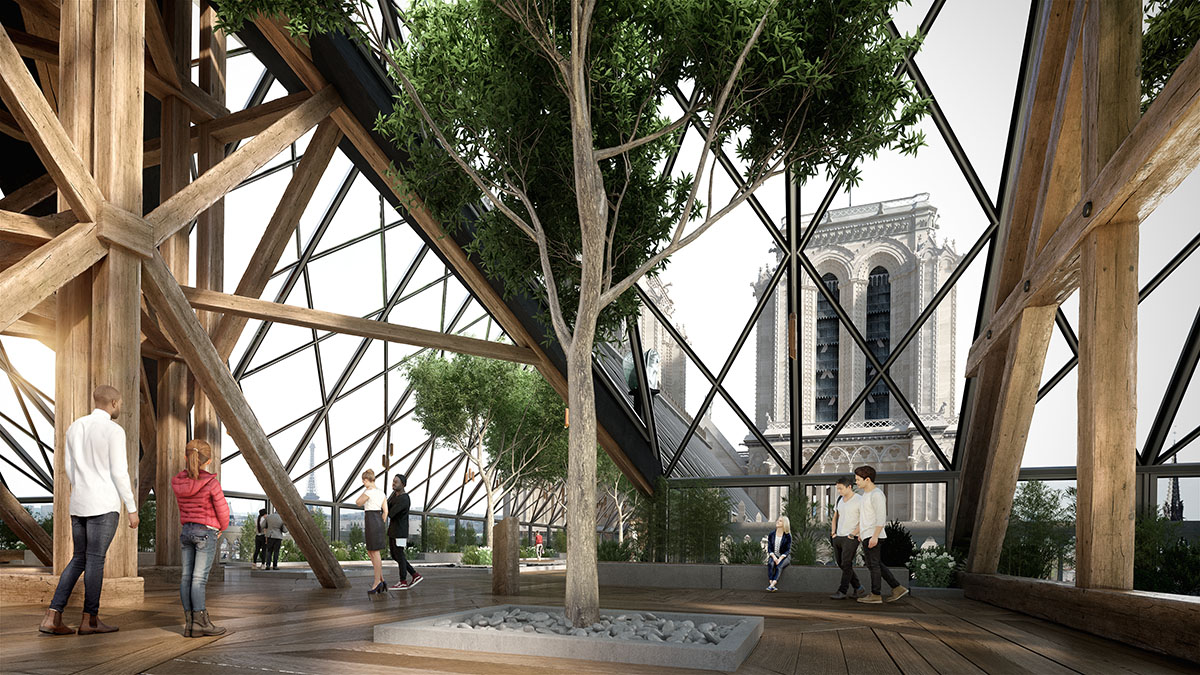 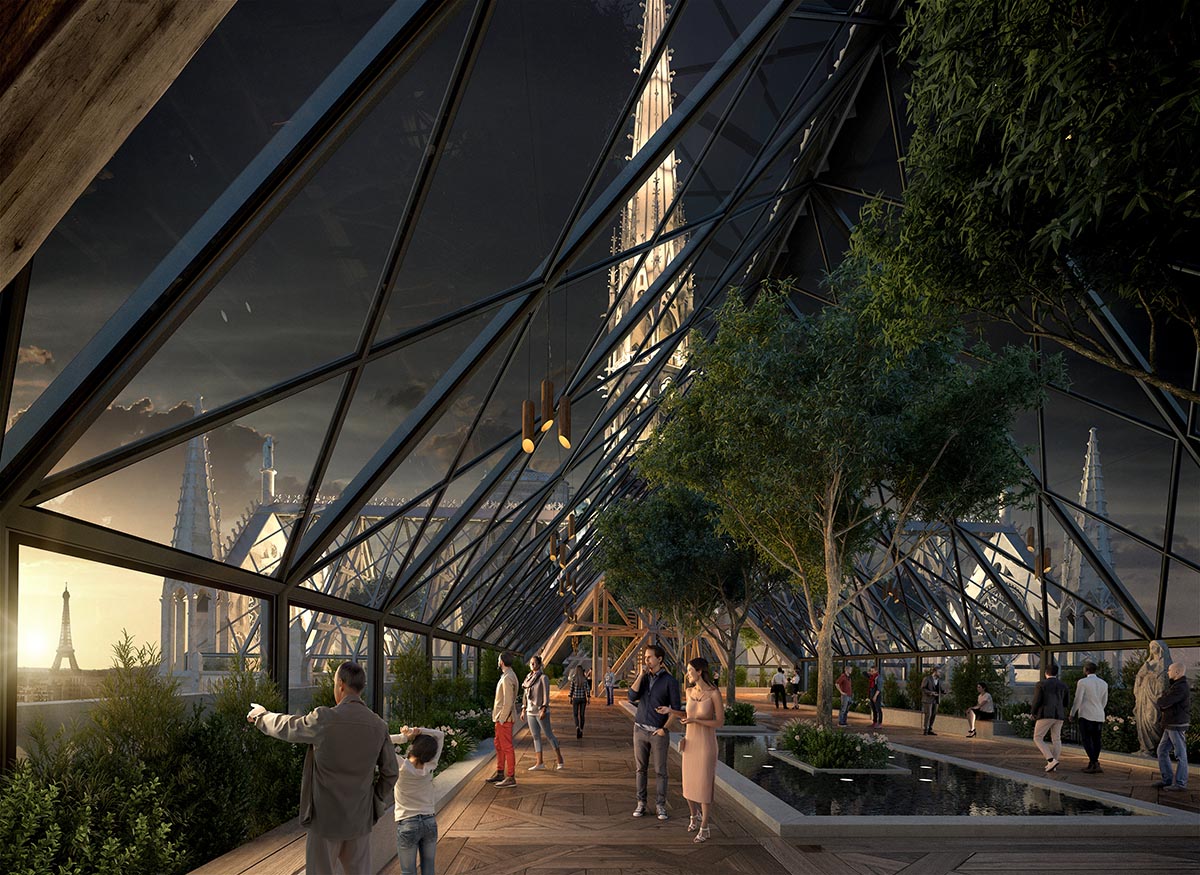 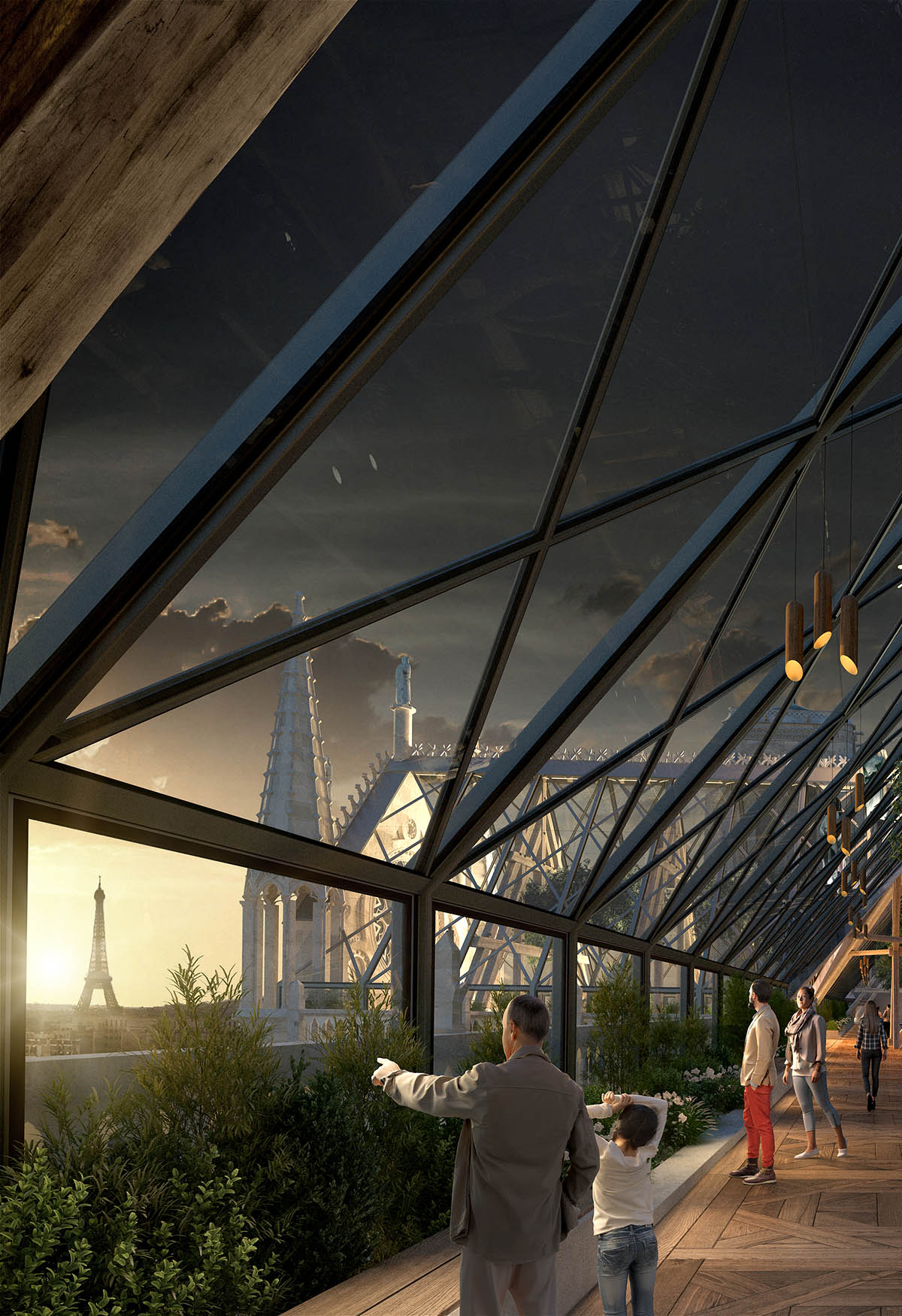 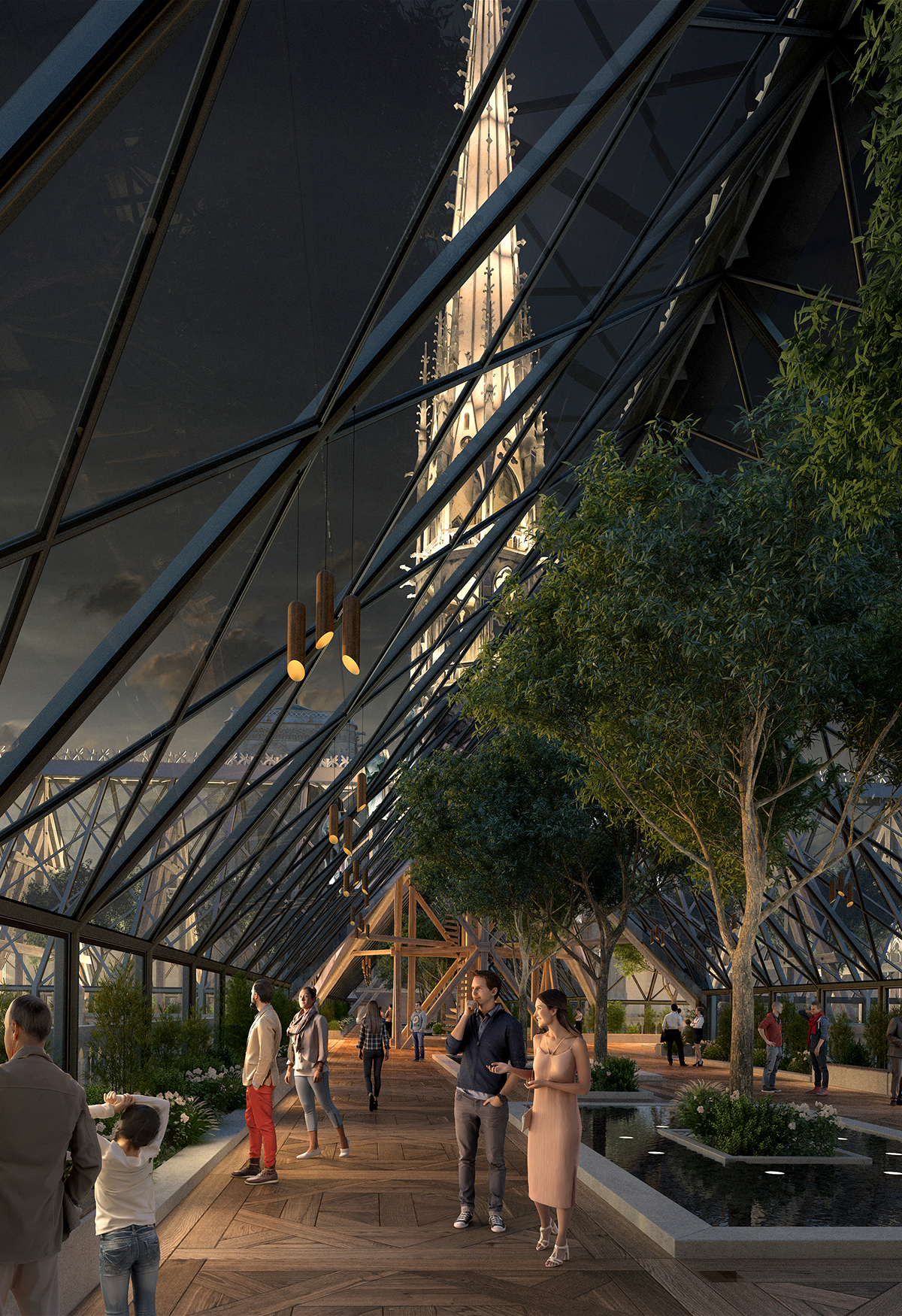 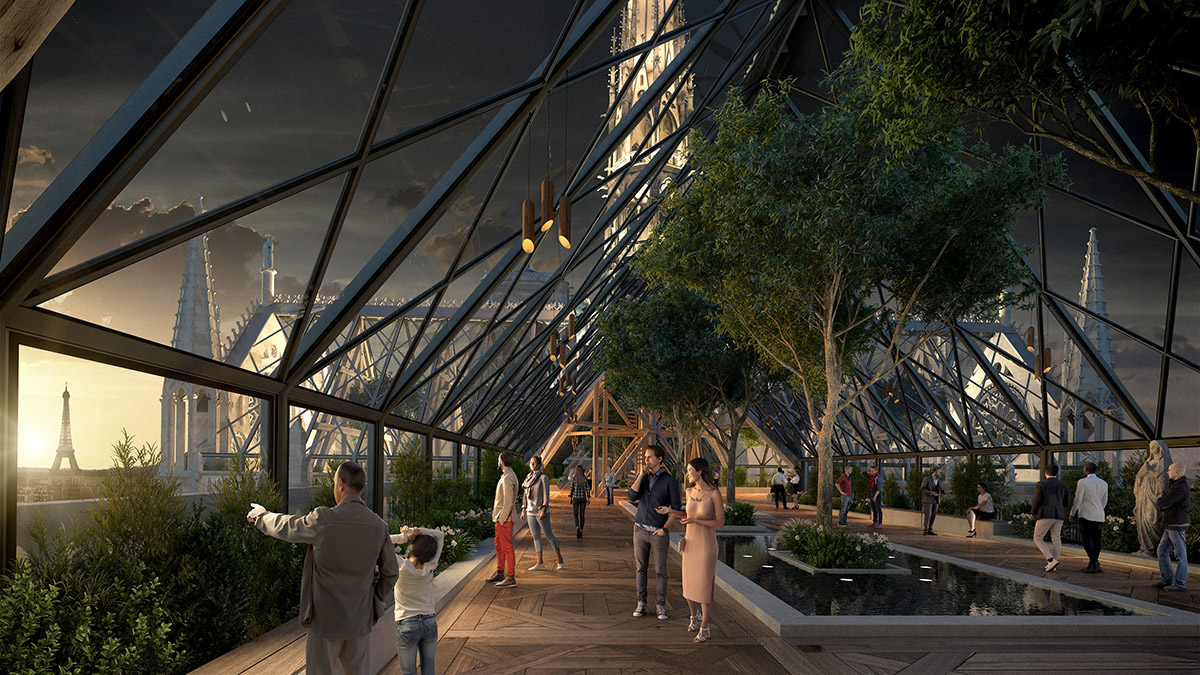 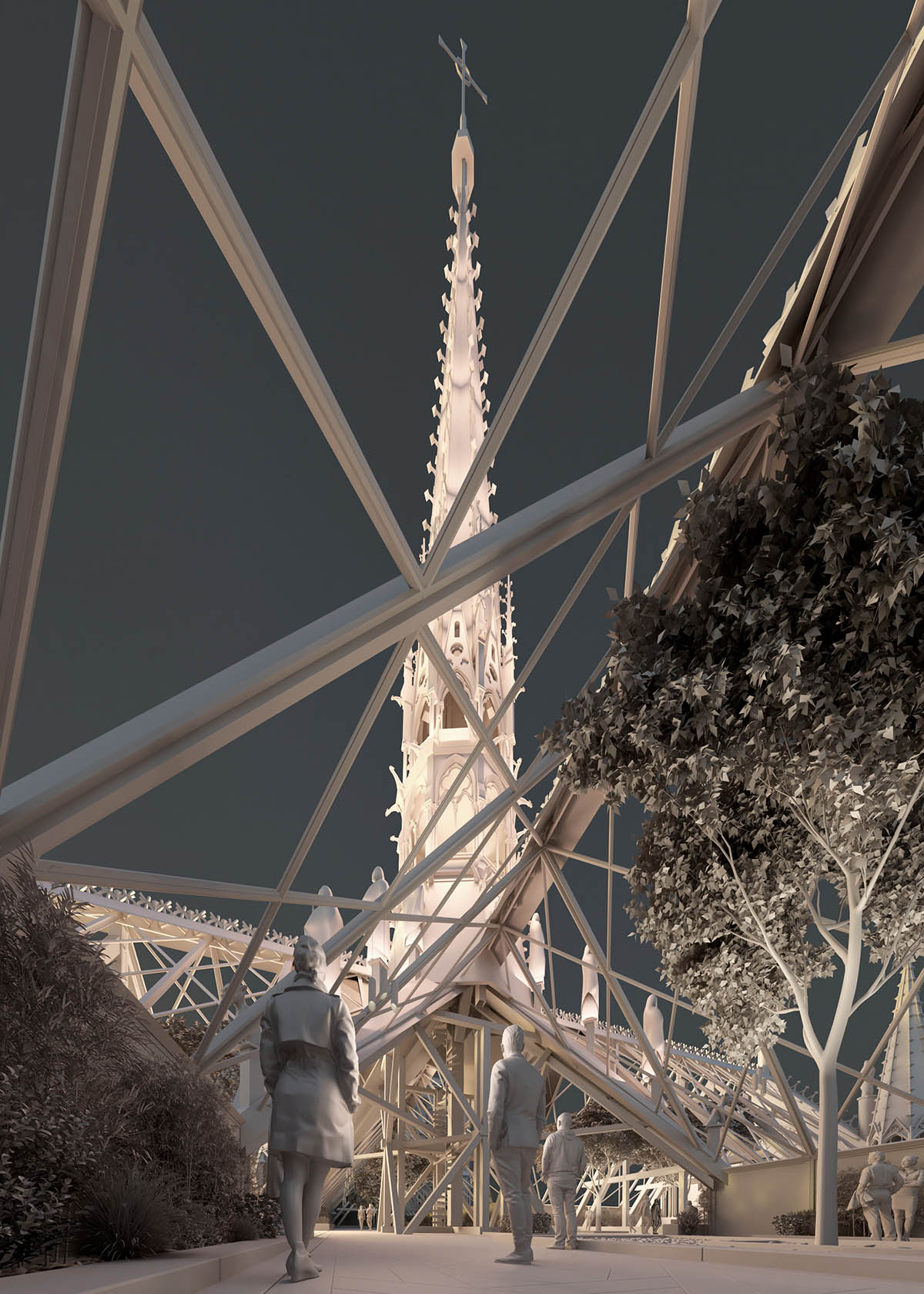 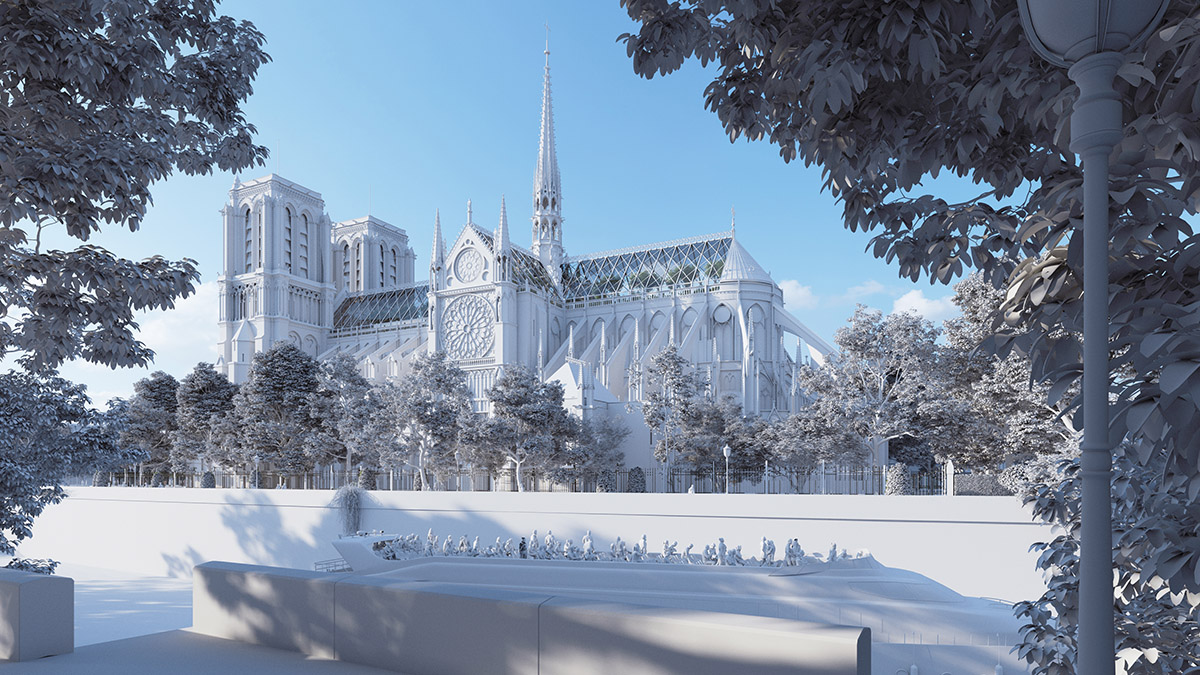 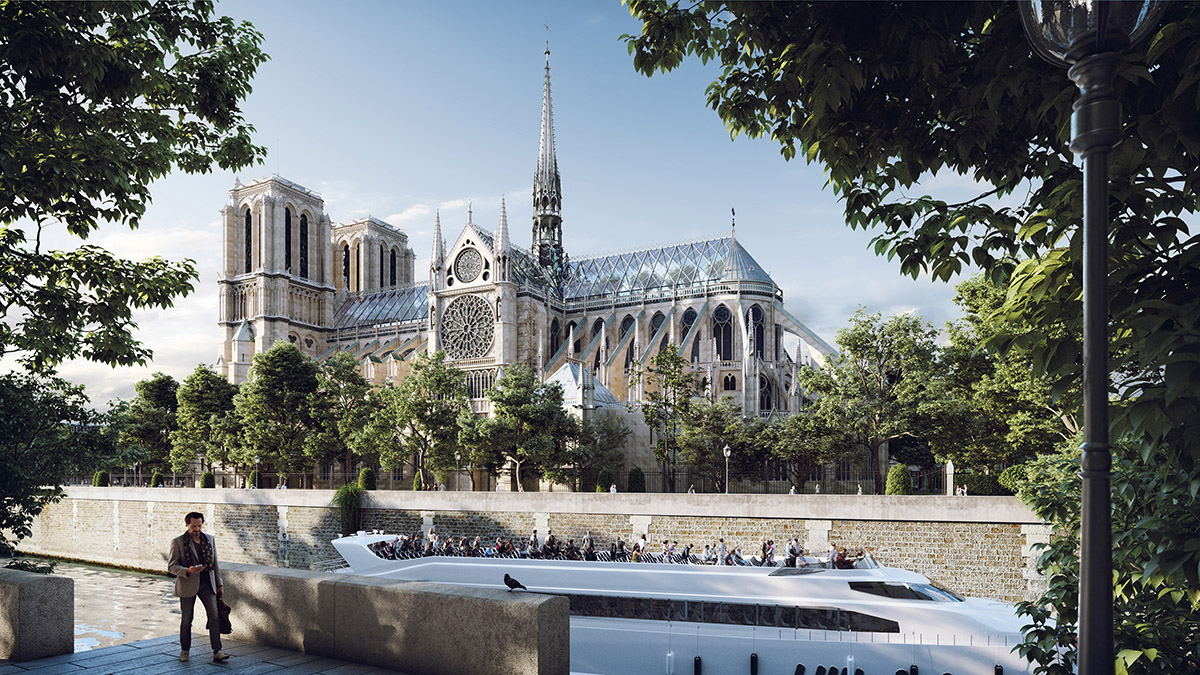 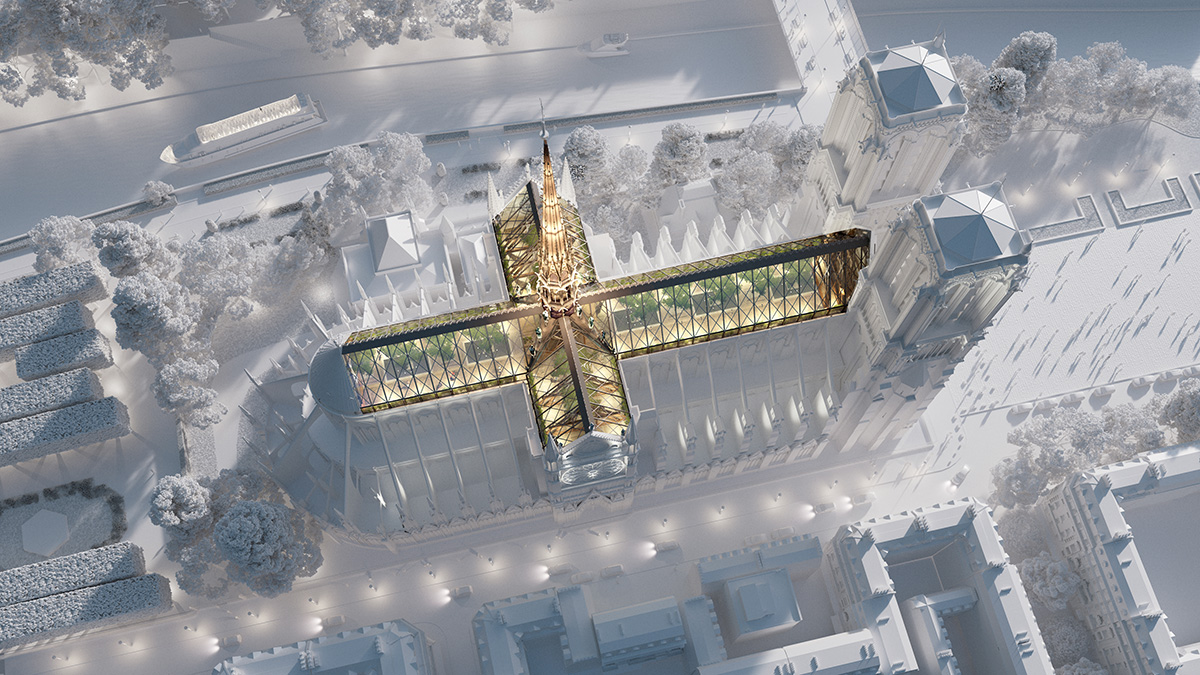 Despite all of these discussions, some studios continue to propose there designs to make live the cathedral. Studio NAB also proposed a greenhouse roof to show how its roof space can be an education and socially active space "in green for all".