The Revival: Need to validate the Fading Arts of Bengal through Architecture 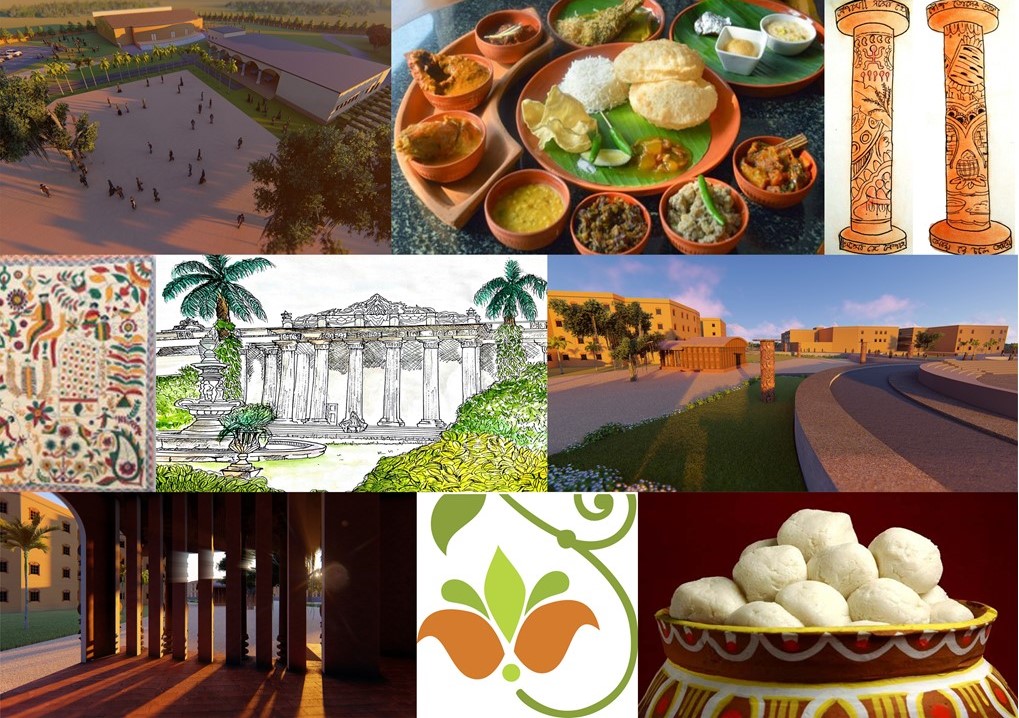 The world, in which we reside in today, has become an infinite arena for increasing technology and massive urbanization. All the nations and countries have entered into the rat race of establishing ‘developed’ and ‘technological’ towns and cities, the words often being misinterpreted or misleading. The fact that poses a question in front of us, is whether these developments have been a strayed and whether these concrete giants have been able to successfully throw away our cultural heritage into an abyss, from which reestablishment seems a difficult task.

West Bengal is a state of diverse culture and huge prospects of hidden talent that is unfathomable to most global citizens today. Certain art & dance forms, musical practices as well as mouth-watering cuisines have not reached the epitome of popularity that they should have. On the contrary, due to low exposure or lack of individuals practicing it, these precious ‘sorcerous stones’ have been buried deep down the world of pomp and show. Often certain museums have taken endeavors of displaying these extinct or nearly lost forms of art but they could not boost the rate of practice of these forms; and thus since it is known to a fewer number of individuals, the way of carrying out or presenting that particular form has been lost or will be lost in a few decades, if not encouraged on a large scale.

The platter of art forms...

Before we indulge any further into the question of ‘how an architectural interface may aid in the resurfacing of these lost gems’, it is imperative that we specify the art forms being referred to and their current stature of popularity on a global platform. These plethoric art forms may be subdivided into three major categories; namely visual, performing and culinary.

Visual arts primarily include painting, sculpting and weaving or stitching. A few instances of fading forms in this cadre would include Nakshikantha (a format of stitching applied on quilts practiced by rural Bengali women), Patua Art (art of elucidating stories through paintings made on cloth, scrolls or leaves by a specific community called the Patuas), Lac Dolls (sculpting brightly coloured theme-based dolls from lac) and Dashabatar Tash (Cards depicting Hindu idols created by the Foujdar Community in rural Bengal).

The second category, that is Performing Arts includes lost assets like Raibenshe (a dance form practiced by the males of the Birbhum district), Gambhira (folk dance form performed on special occasions on the streets of the Purulia district), Shyama Sangeet (genre of devotional songs performed in the temples of rural Bengal) and Dwigendrageeti (Songs written by a Bengali poet D.L. Ray, mostly depicting Bengal and its beauty); to name a few out of a lengthy list.

Finally, mouth-watering dishes including Gohona Bori (a fried snack made out of lentil paste in the shape of jewellery as the name suggests ‘Gohona’ meaning ‘ornaments’), Nakshipitha (decorated dessert delicacy), Monohara (Sphered sweets in delectable flavours); have been long subdued into the sands of time and do not find their practice even in the greatest Bengali food chains around the world.

Citation of similar structures in Bengal

There have been a few attempts from the architectural fraternity in conciliation with the Government to provide a significant platform to a few of the above-mentioned arts. However, due to innumerable reasons including improper space provisions, architectural concepts utilized or remotely accessible locations: the endeavors did not succeed to establish the buzz of these intrinsic art forms in the lives of the residents of the city. For instance, the Bengal Museum of Modern Art by Arts Acre Foundation is located in the Newtown area of Kolkata, West Bengal. 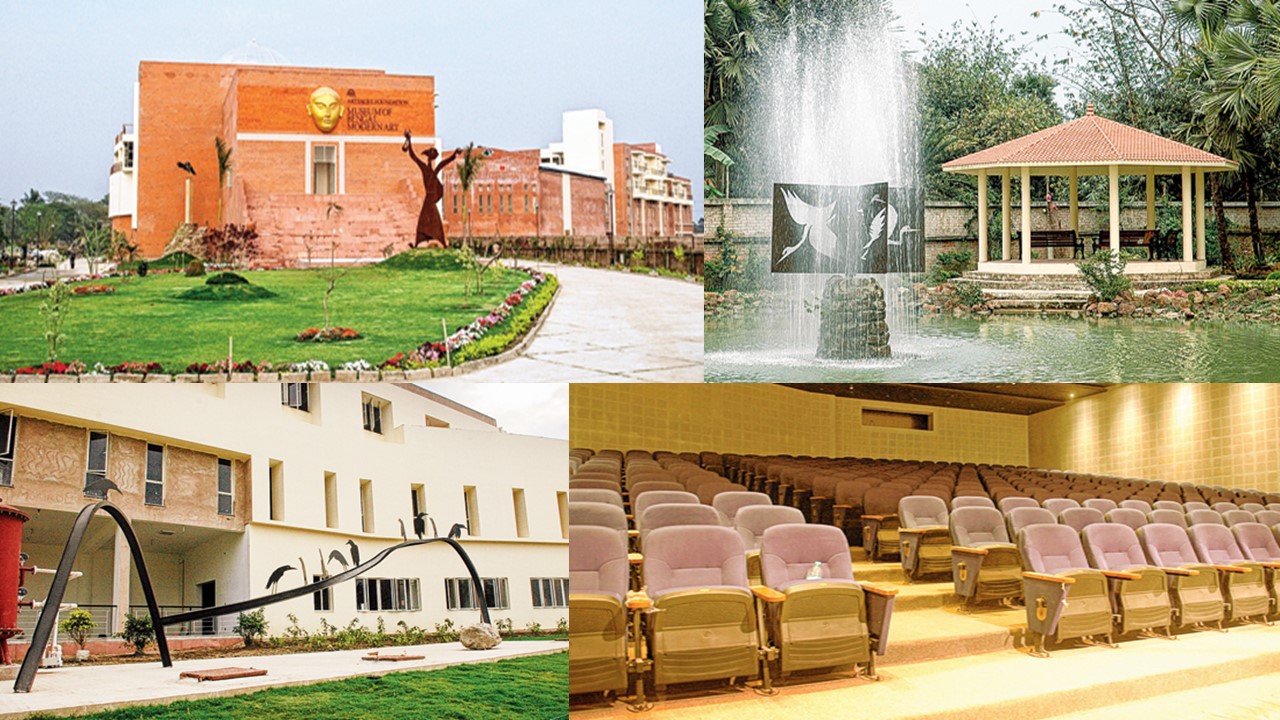 In spite of its vicinity to the Salt Lake, the present hub of development in the capital city, its actual distance from nearest city center is quite a few kilometers. It is surrounded by barren lands and under construction sites, that make it an arduous journey for any patron trying to access it. Therefore, even though the ambiance it endeavors to create; through the rustic exposed brick façade, an intricate silhouette of a Baul as a welcoming mascot and efficient spaces dedicated for the purpose of conducting workshops, seminars on the glorious history of art; its declining footfall may be noted from the pie charts below. 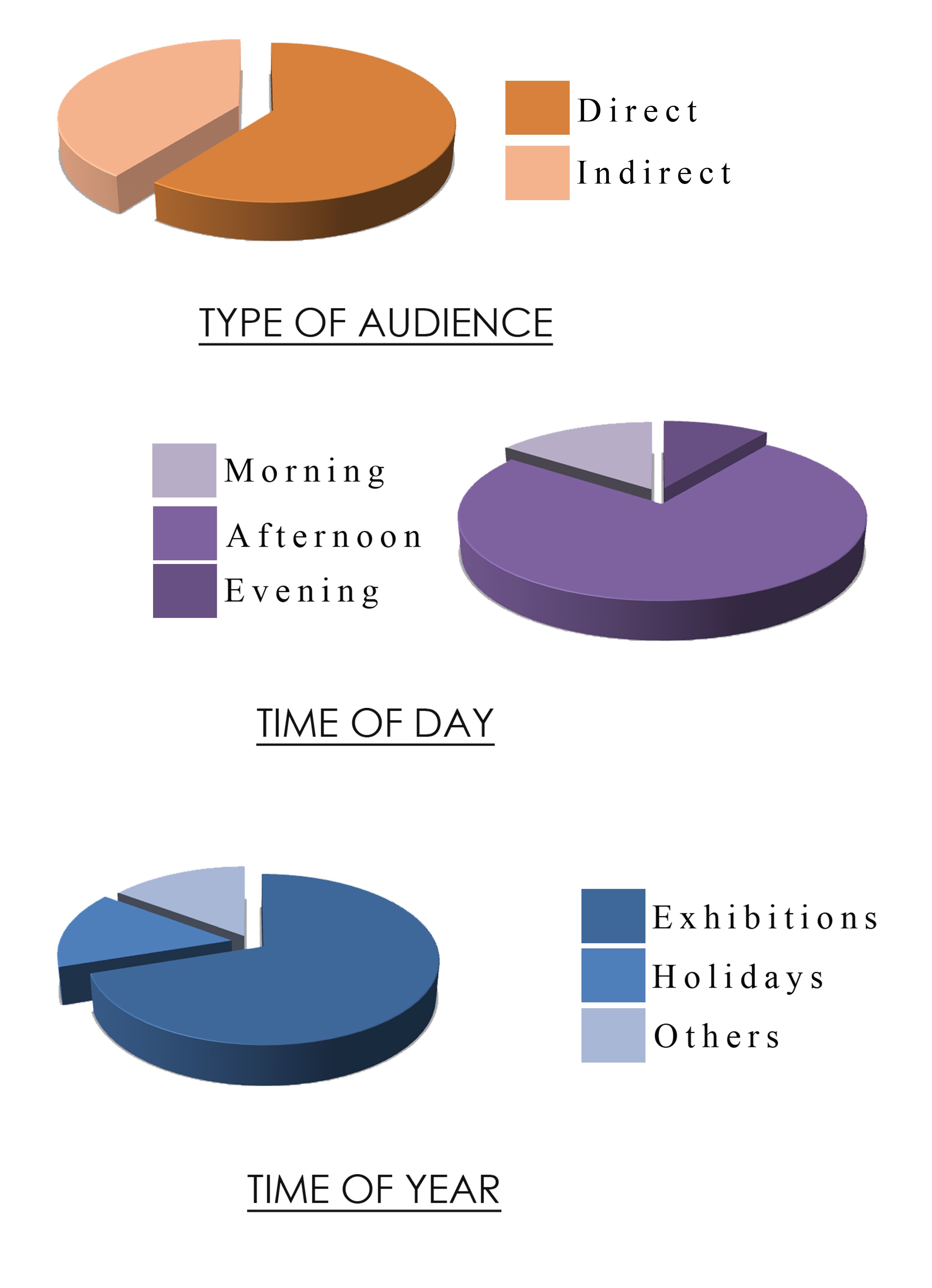 Yet another similar example is that of the Eastern Zonal Culture Centre. In spite of being centrally located in Salt Lake, Kolkata; it fails to excite the imminent users and guests with its design interventions. A lack of maintenance and renovation, resulting in a backdated interior set-up that does not comply with contemporary technologies, is also a major reason for its set-back.

Jawahar Kala Kendra: an arts center with a soul

Contrary to the above examples, there is a structure in one of the most traditionally active parts of India, that imparts a lingering image in the mind of the visitors, with its bold design ideology and relevant concept. Built by the eminent Charles Correa in 1986, this arts center is called the Jawahar Kala Kendra and is located on a bustling junction at Jaipur, Rajasthan.

The most intriguing aspect of this center is its conceptualization and planning, which even though is not perceived by any individual entering the premises without prior knowledge, marks its symphony with the easily perceivable elements as well. The layout of the structure was not only inspired out of the master plan of its parent city but also deeply related to one of the most historic architectural concepts of the Indian culture. 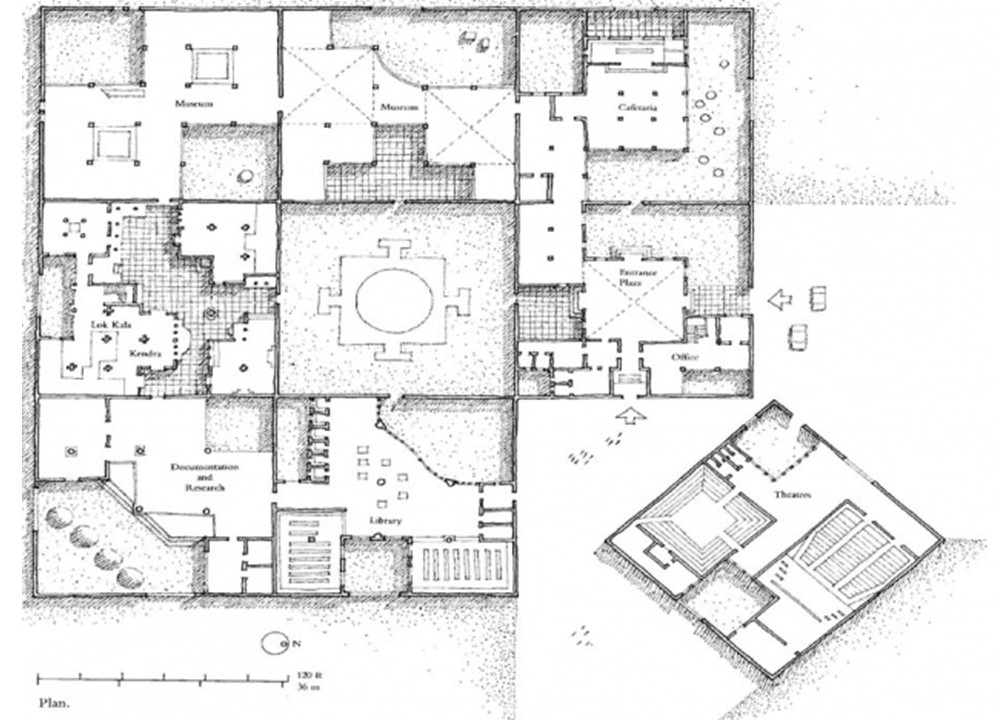 Correa's plan for the Kendra invokes directly the original navagraha or nine house mandala. One of the squares is pivoted to recall the original city plan and also to create the entrance. The plan of Jaipur city based on the nine square Yantra in which one square is displaced and two central squares combined. the squares are defined by 8m high wall, symbolic of the fortification wall along the Jaipur old city. 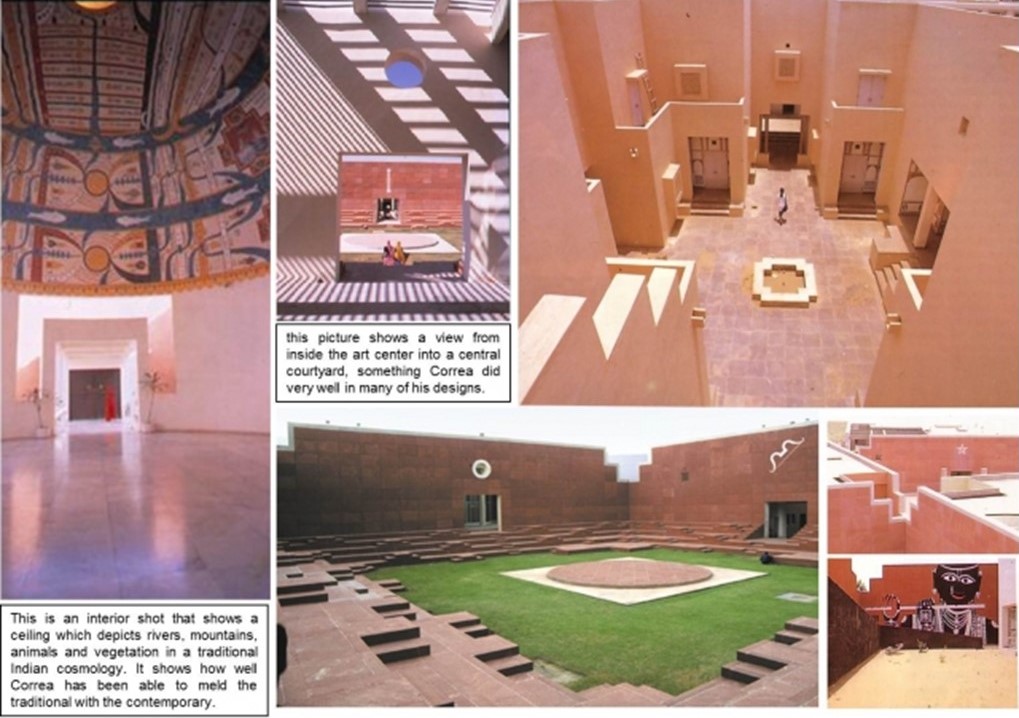 To supplement the innovative planning concept, the façade poses a distinct statement with its blank red sandstone walls with the occasional glistening motifs, symbolizing the Vaastu Purusha Mandala, the core idea behind the design. The interiors house numerous spaces for the display and practice of arts while creating an illusion of light and shadow, throughout the commuting axes.

A proposal to revive the Fading Arts of Bengal

This proposal, curated by me as a Bachelor degree dissertation, is aimed at designing a center for the almost extinct art forms of West Bengal, India; so that, these arts and artists achieve the encouragement and profit that they deserve. A first-ever attempt of creating an art center dedicated specifically for such art forms, it is conceived to be hypothetically located at Howrah, Kolkata owing to its historical influence, suitability with reference to the topic and the nostalgia that it bears with the citizens of the city.

The center shall involve concepts of inclusive designing and organic planning in order to make it acknowledgeable to the maximum target audience as possible. The design shall also pose for 'versatile' in its appeal in order to house the different festivities and seasonal celebrations that are celebrated in West Bengal. The entire journey through this center will cater to influence and pamper all the 'five senses' thus making it rather an expedition through Bengal of olden days. The foresight of this project shall be mass empowerment of artists and artisans still practicing such art forms. This can only come to reality when eventually large cottage industries are set up and the artists continue their esteemed legacy in their respective crafts. 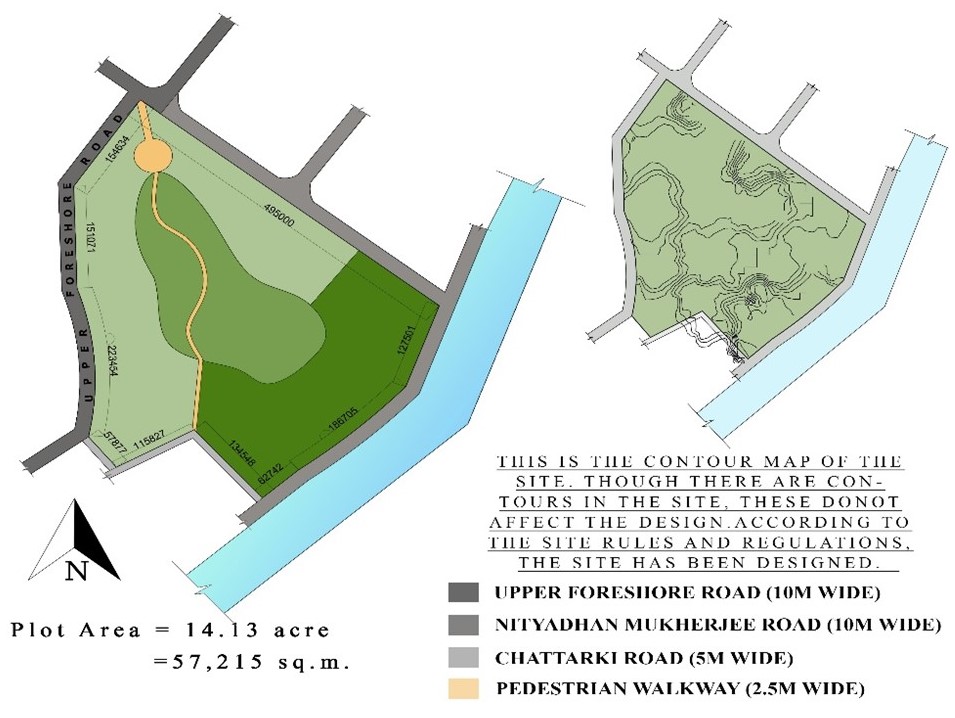 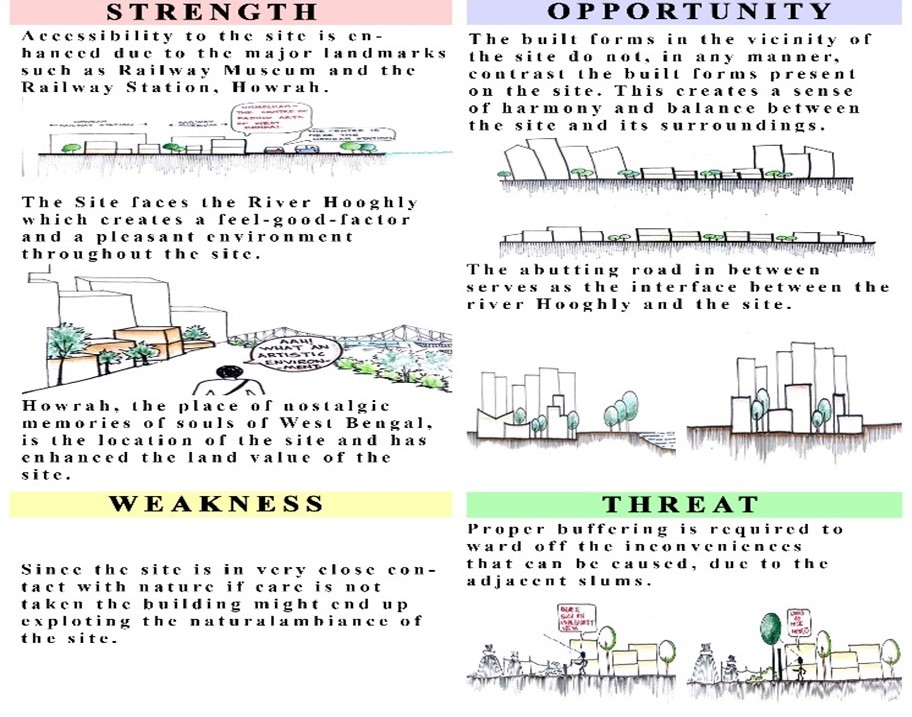 Based on the ideology stated above, this Centre for Fading Arts of Bengal can be conceptualized to have the following activity distribution. 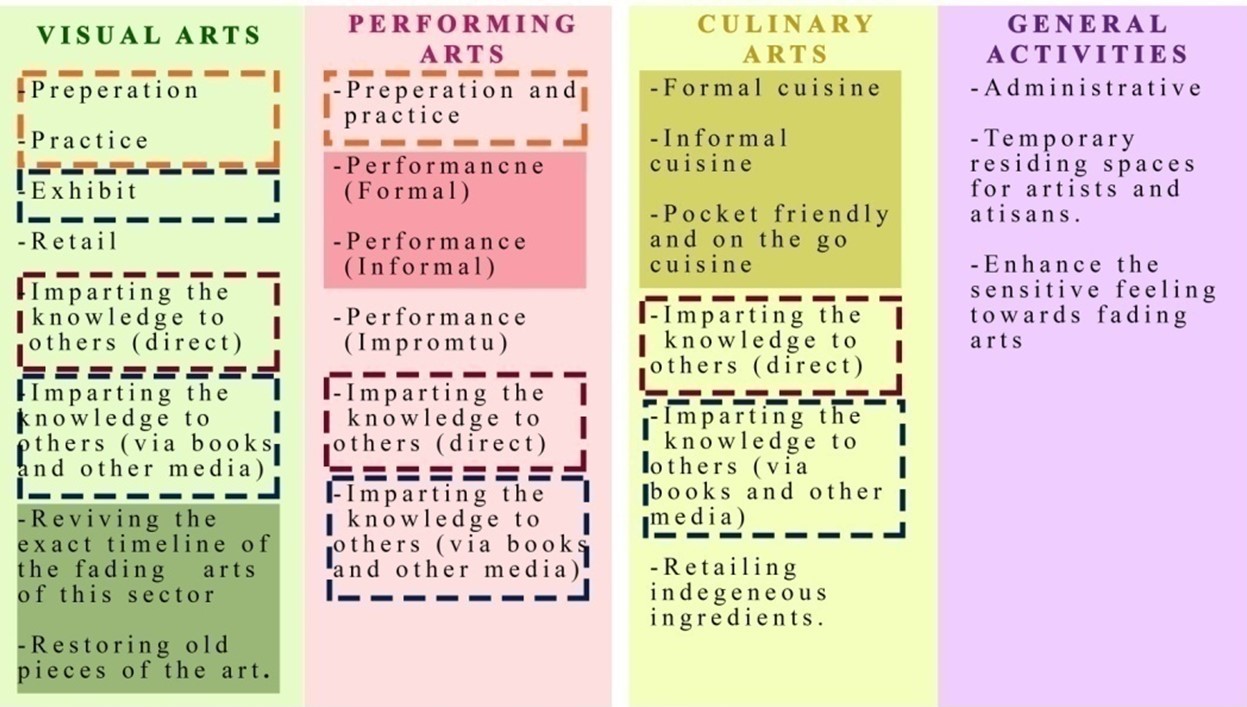 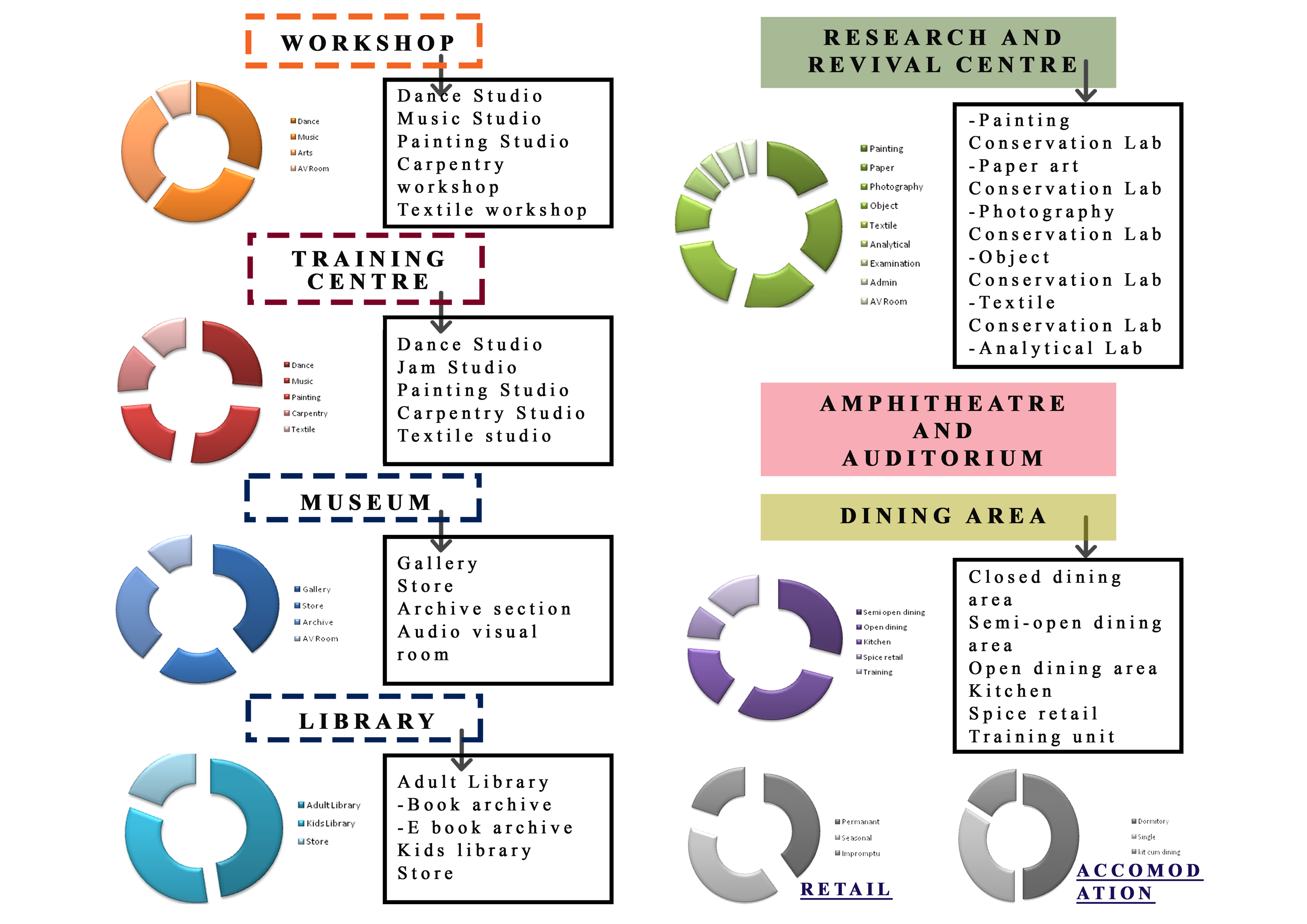 This requirement list is the core format utilized to design the following conceptual site plan, with specific built-up structures dedicated to definitive agglomerates of the targeted art forms, i.e, visual, performing and culinary. 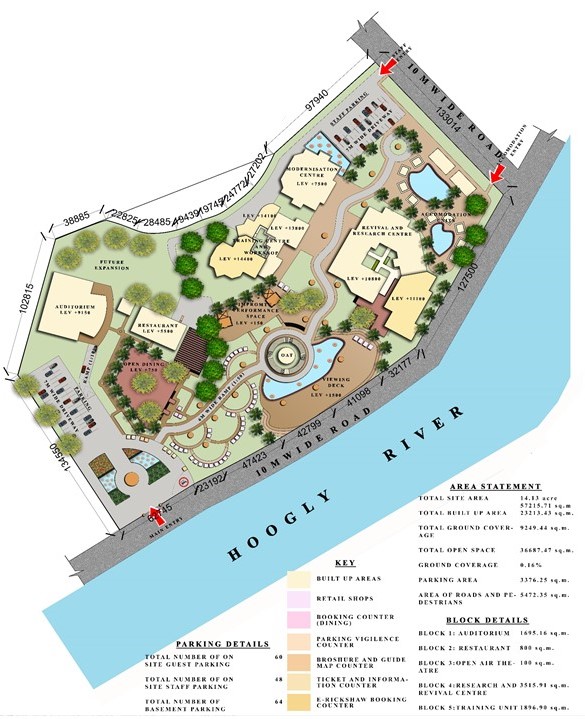 A few rendered views have been provided to further elucidate the ambiance aimed to achieve. 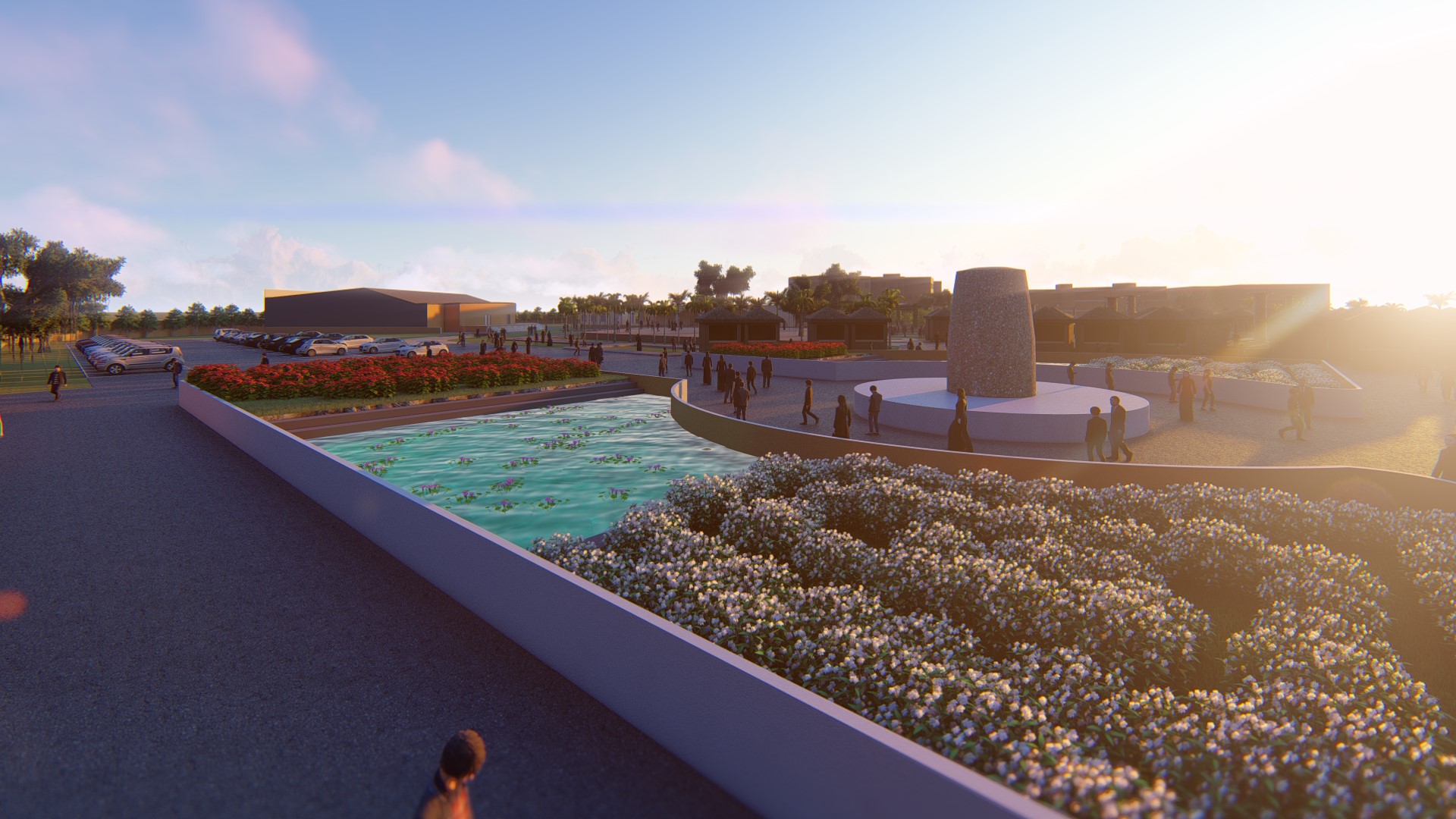 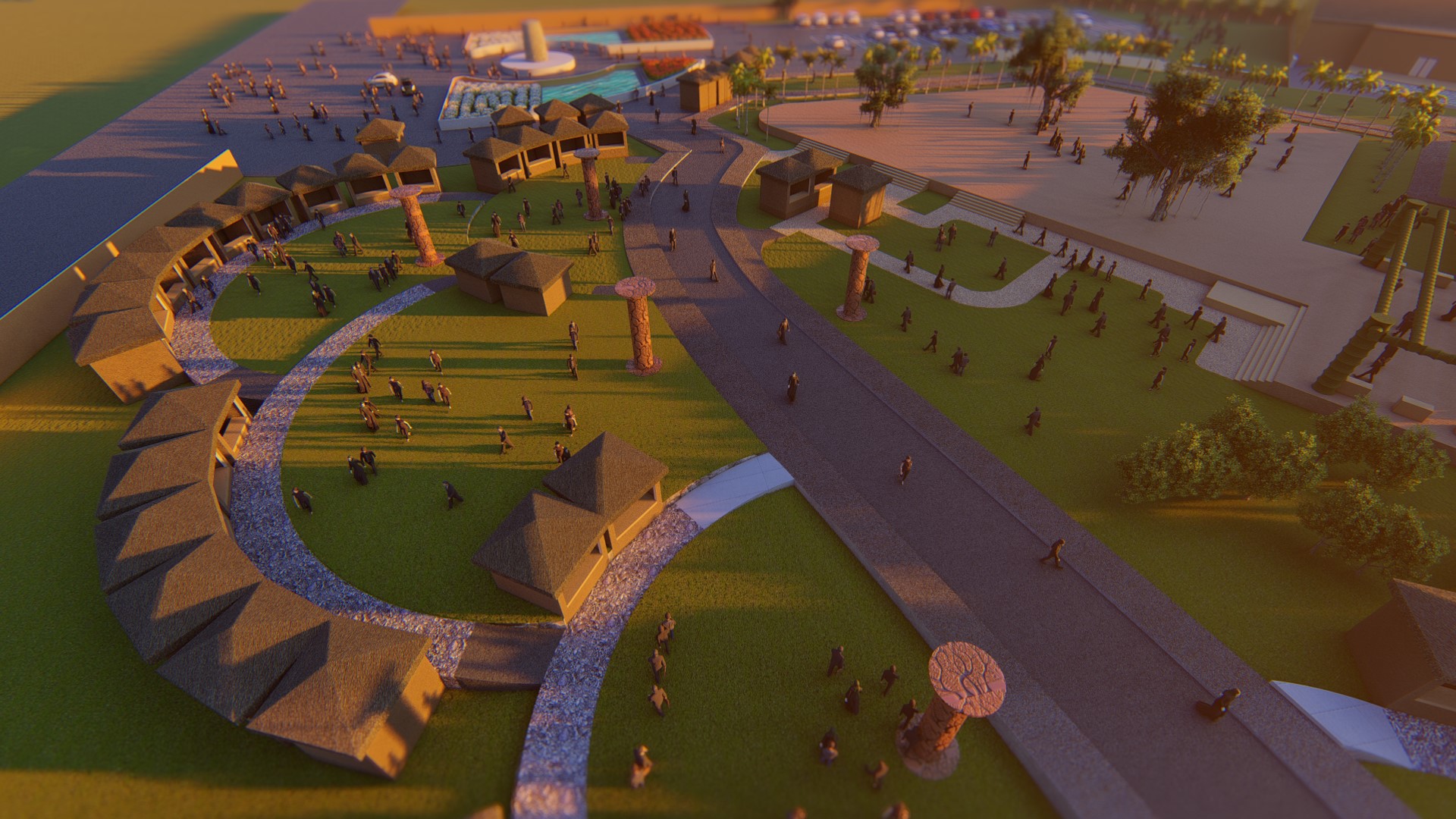 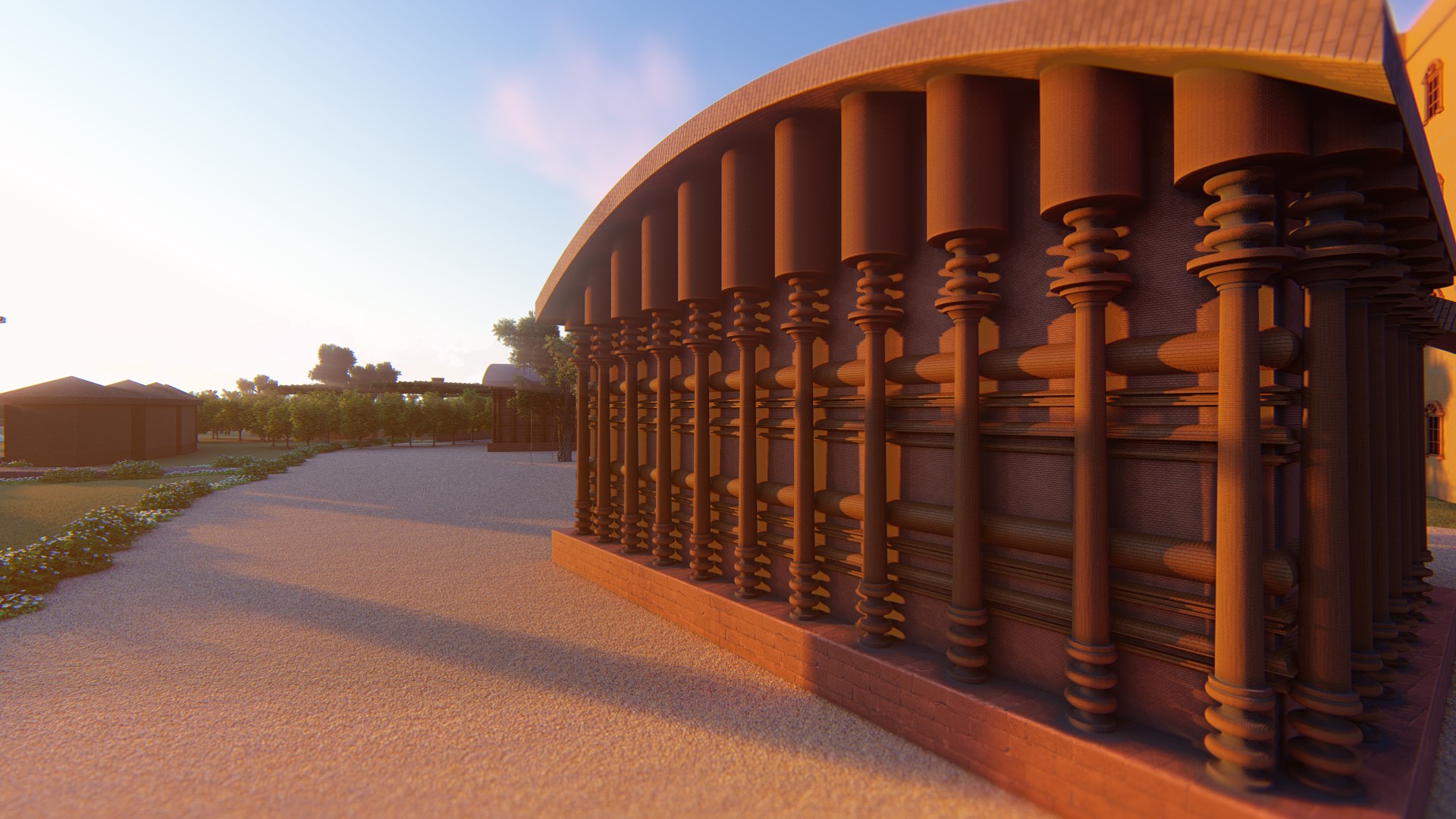 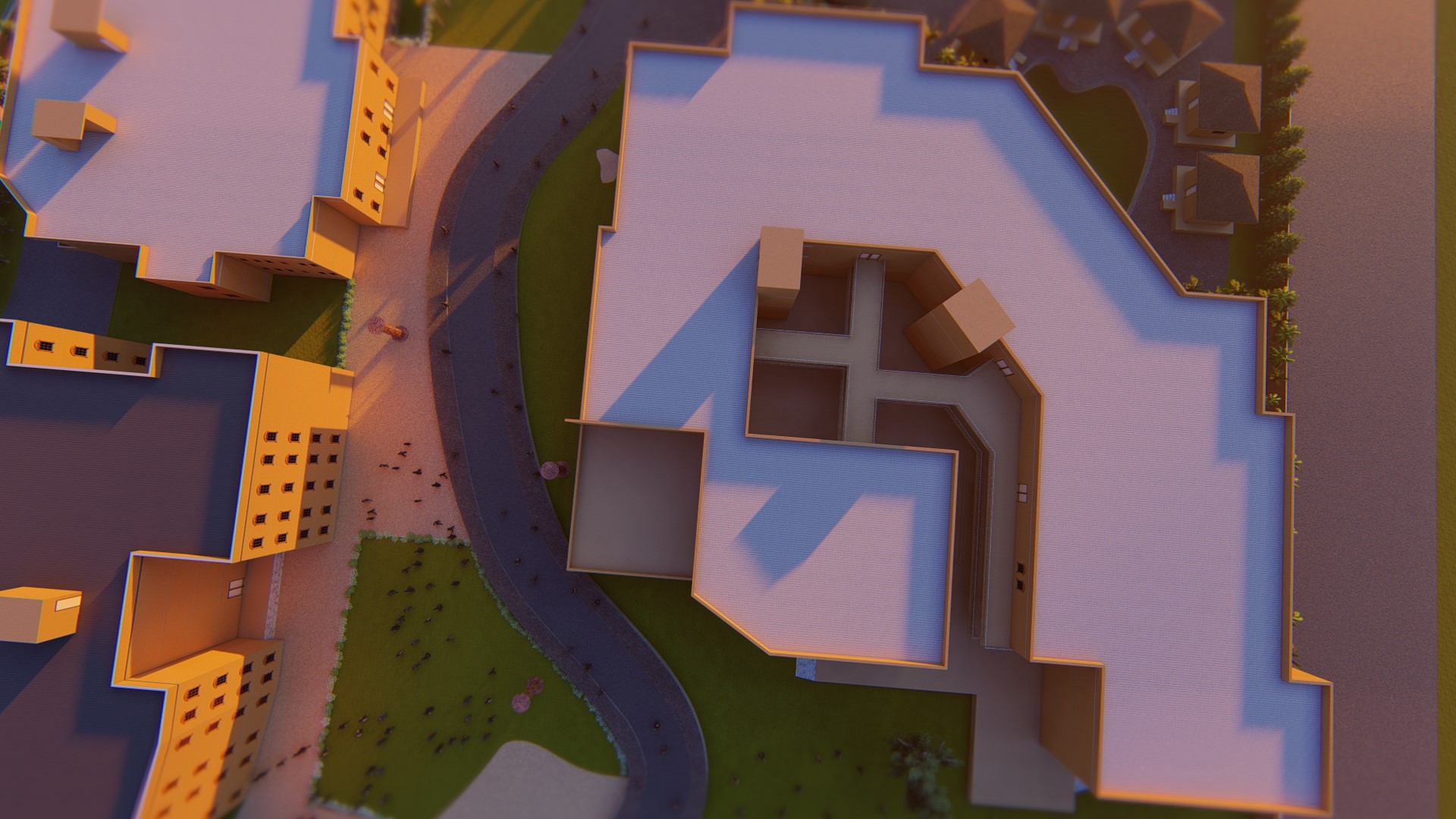 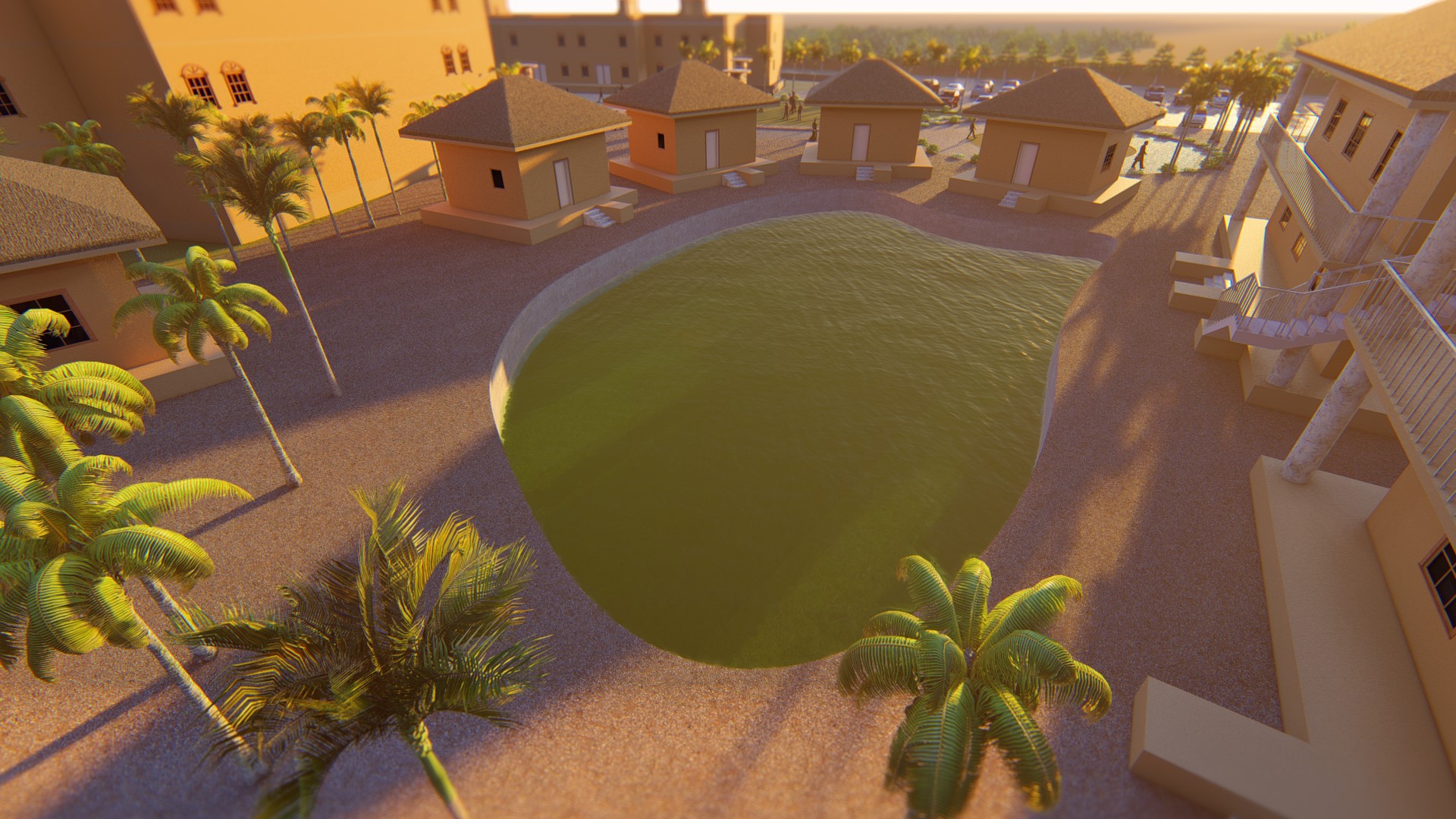 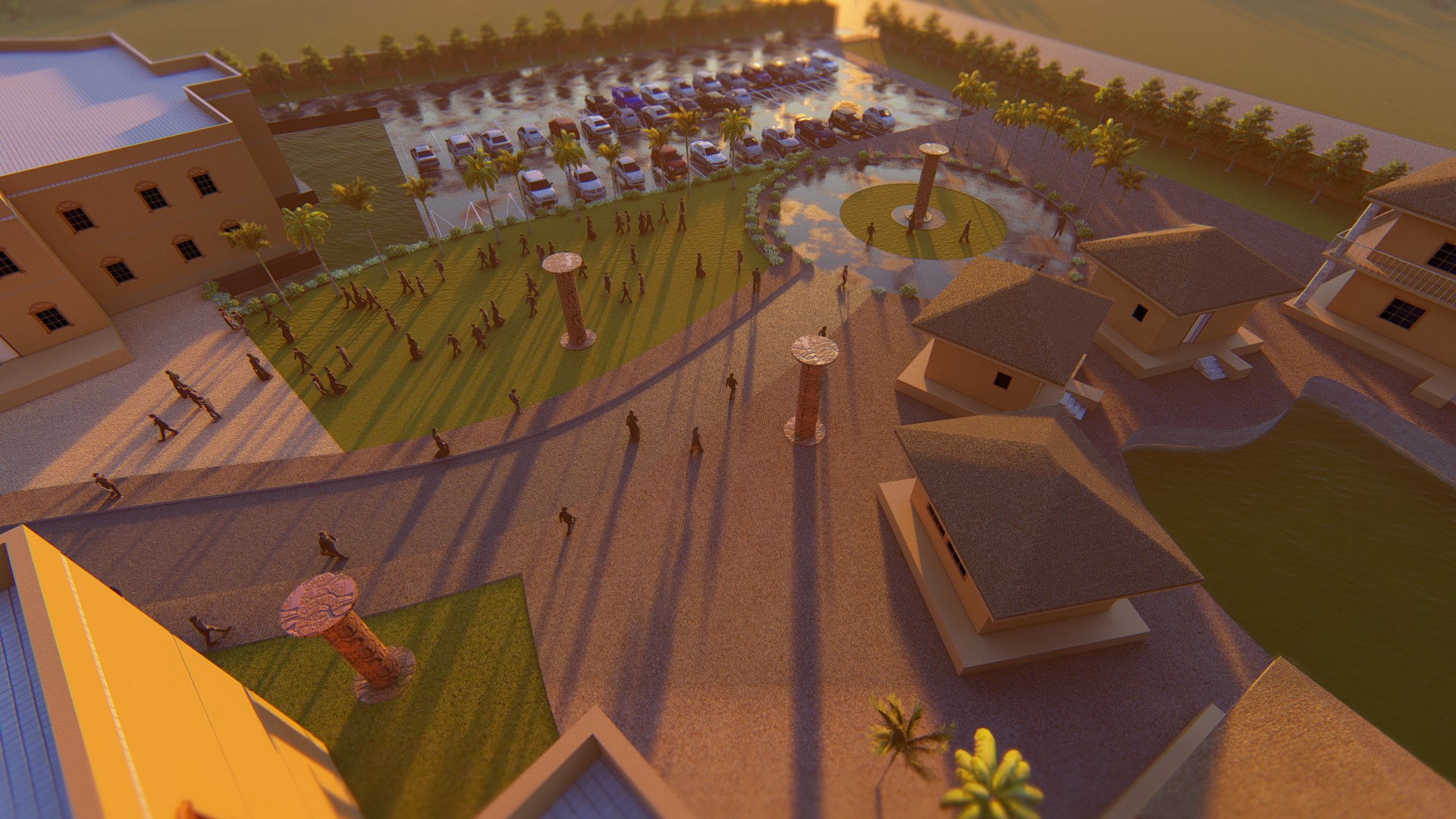 Any project or aim of a massive scale cannot be completely recognized unless and until it is carried on forward with the continued efforts of the participating sectors of the society and authentic administrative bodies. This holds true for this center for fading arts as well. The center is just a stepping stone towards realization of the dream, that is, resurfacing these art forms completely amidst the opulent society of today and thus helping the concerned artists and artisans to gain the dignity and respect that they deserve. Also, the project successfully not only features the fading arts of Bengal but also the snippets of Bengali tradition that are no longer a part of our daily stringent lives.

All images by Bineeta Ghoshal