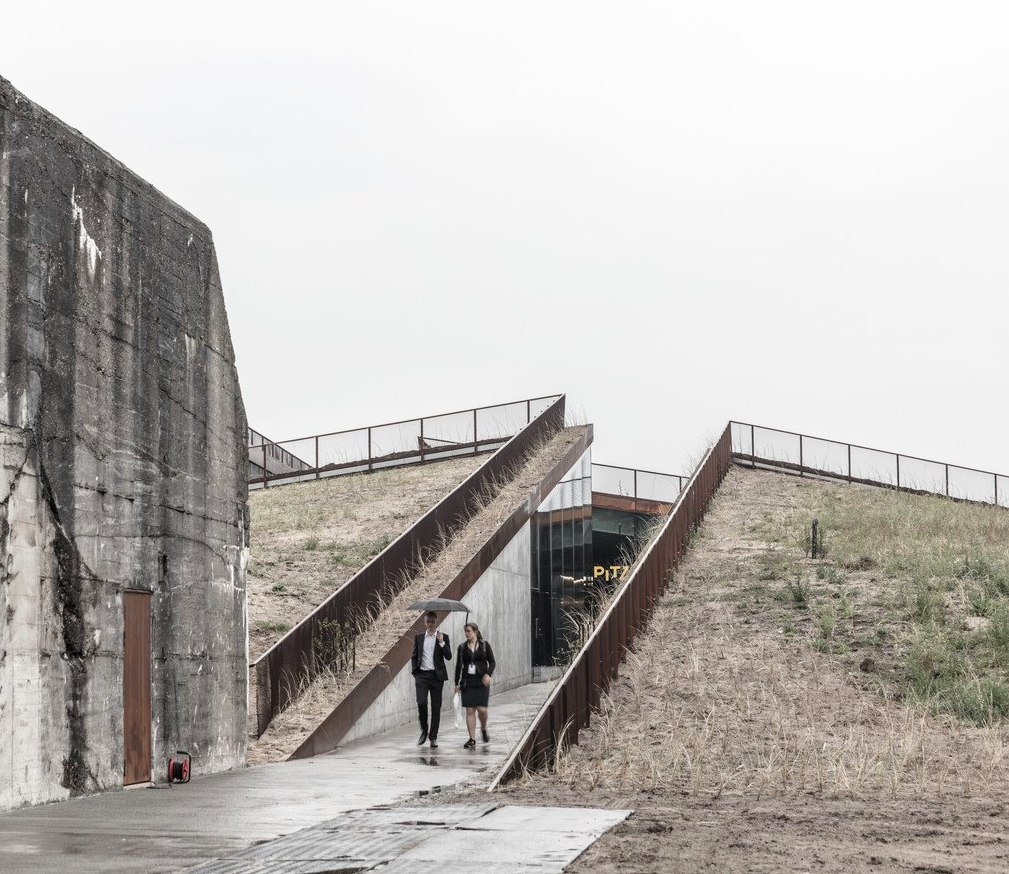 BIG has completed an "invisible museum" embedded in the dune landscape, which counters a WWII bunker of the Atlantikwall along the westcoast of Denmark.  Called Tirpitz, the new sanctuary hidden in the sand acts as a gentle counterbalance to the dramatic war history of the site in Blavand on the west coast of Denmark.

The 2,800-square-metre museum transforms and expands a historic German WWII bunker into a groundbreaking cultural complex, comprising four exhibitions within a single structure, seamlessly embedded into the landscape. 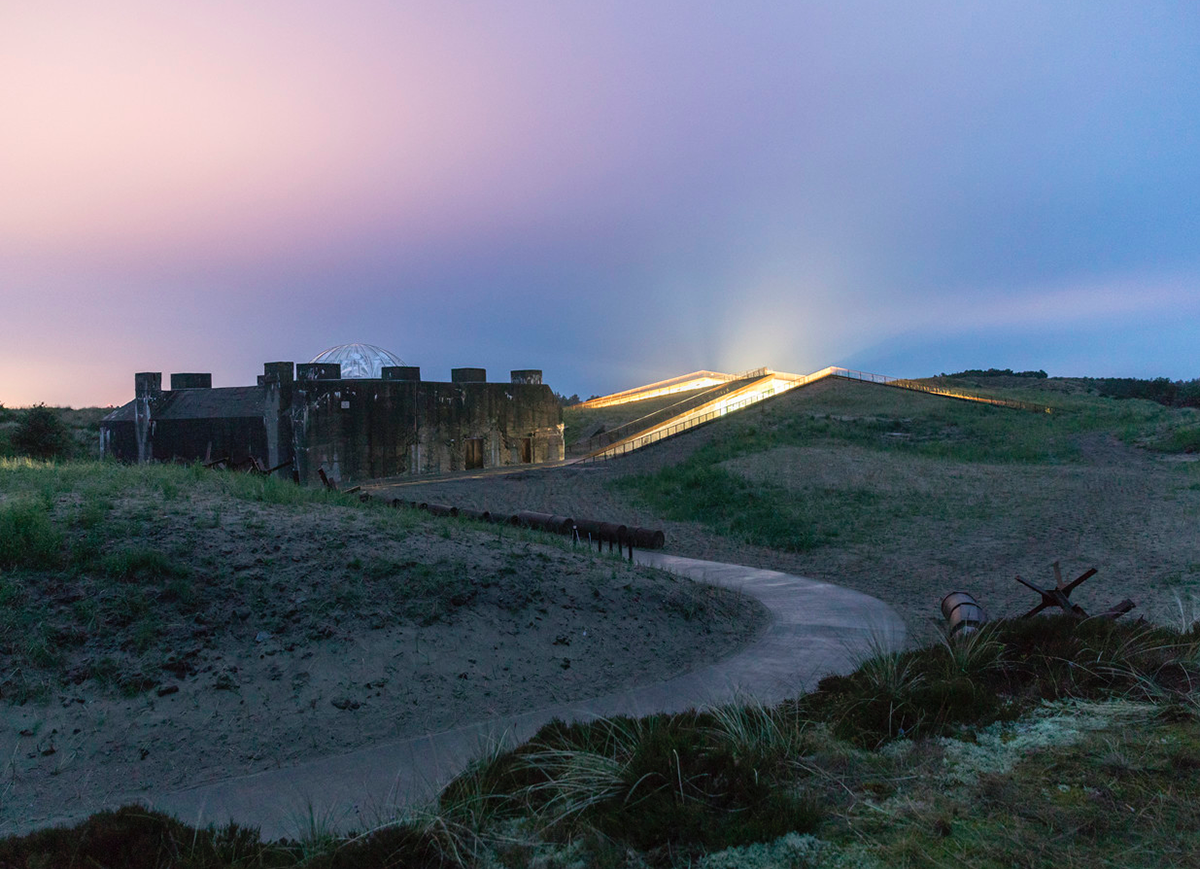 Upon arrival, visitors will first see the bunker until they approach through the heart-lined pathways and find the walls cut into the dunes from all sides and descend to meet in a central clearing. 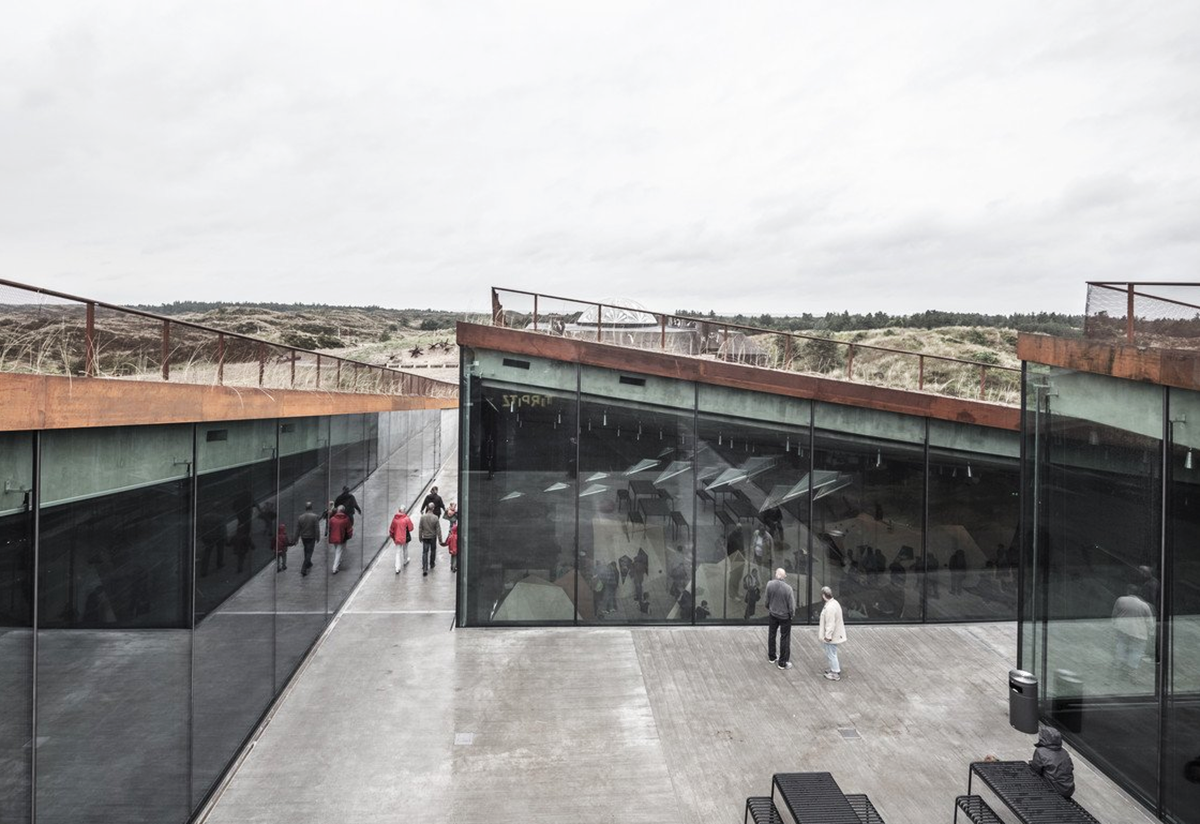 The Museum Center Blavand contains 3 museums and 1 special exhibitions gallery. Each museum serves as an independent unit with requirements for the ability to change exhibitions, host special events and to have their own opening hours. 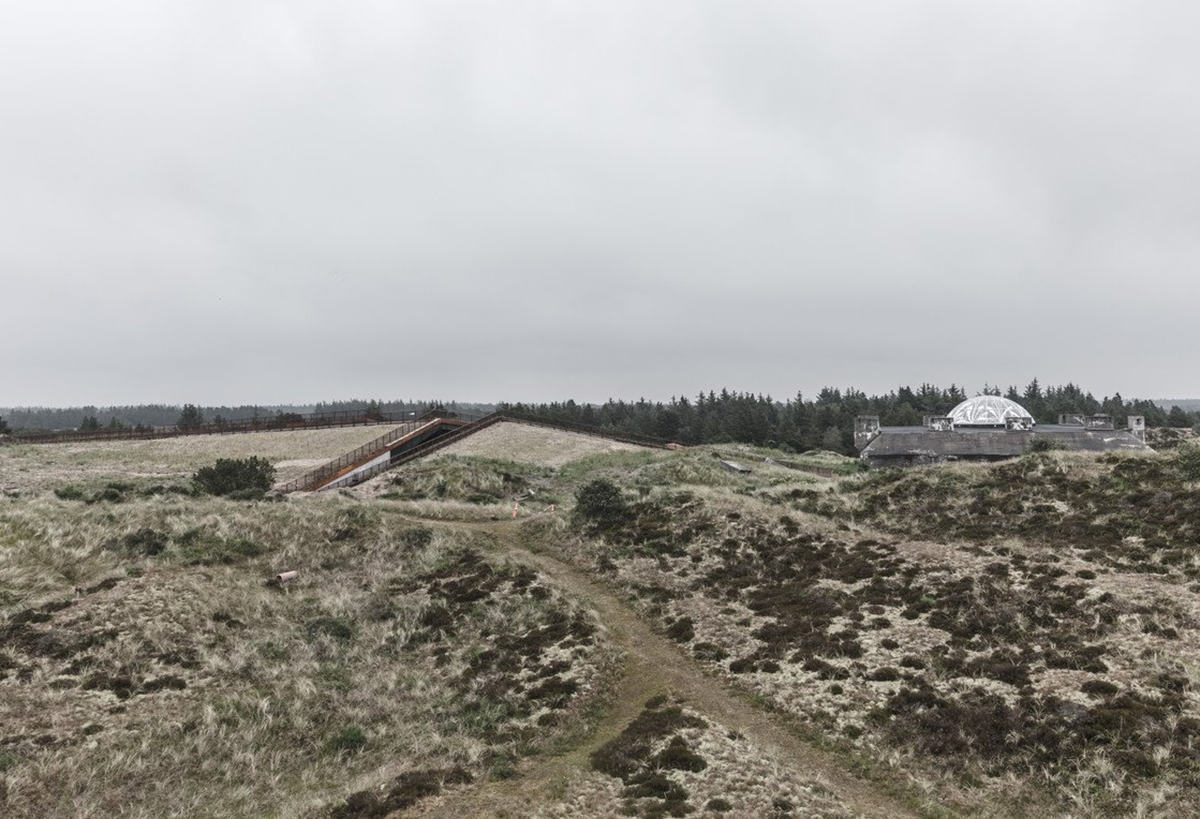 "The architecture of the TIRPITZ is the antithesis to the WWII bunker. The heavy hermetic object is countered by the inviting lightness and openness of the new museum. The galleries are integrated into the dunes like an open oasis in the sand – a sharp contrast to the Nazi fortress’ concrete monolith," said Bjarke Ingels, founding partner of BIG.

"The surrounding heath-lined pathways cut into the dunes from all sides descending to meet in a central clearing, bringing daylight and air into the heart of the complex. The bunker remains the only landmark of a not so distant dark heritage that upon close inspection marks the entrance to a new cultural meeting place," added Ingels. 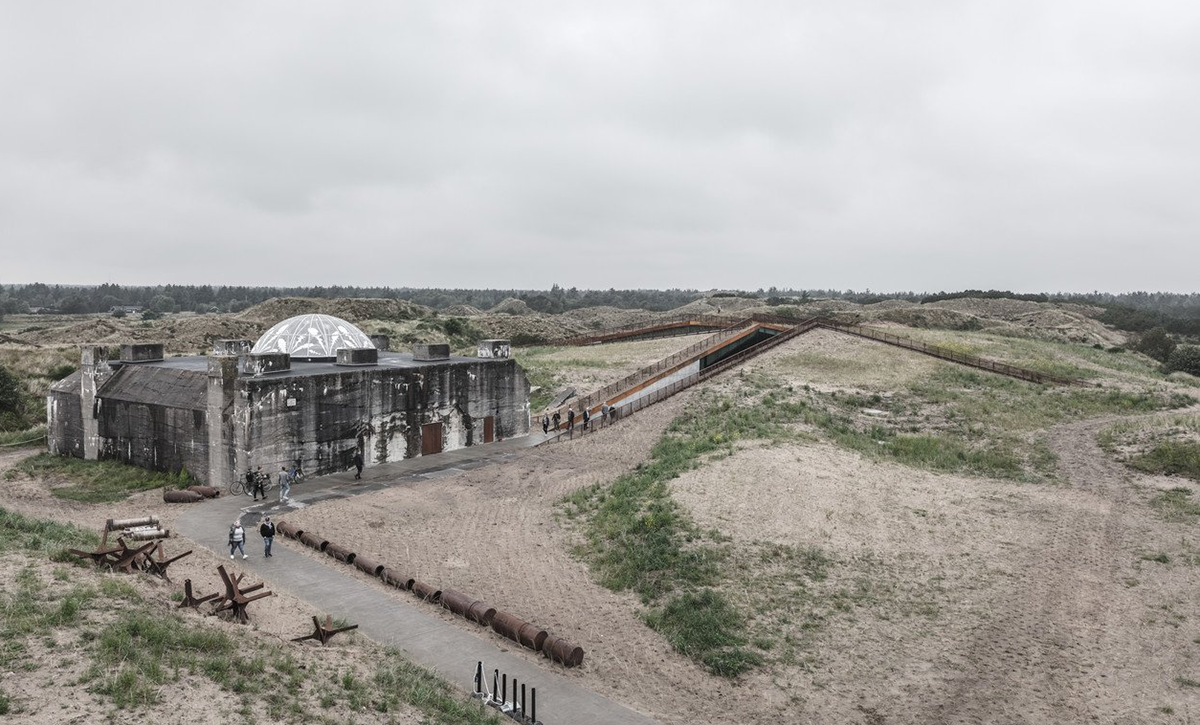 At the same time the complex is seen as a larger entity with the possibility for continuous circulations and communication between the various museums.

The bunker and crane embankment to its north constitute the site for the new museum. The four museum galleries are placed on site including Bunker museum, Amber museum, Histolarium and Special Exhibitions. 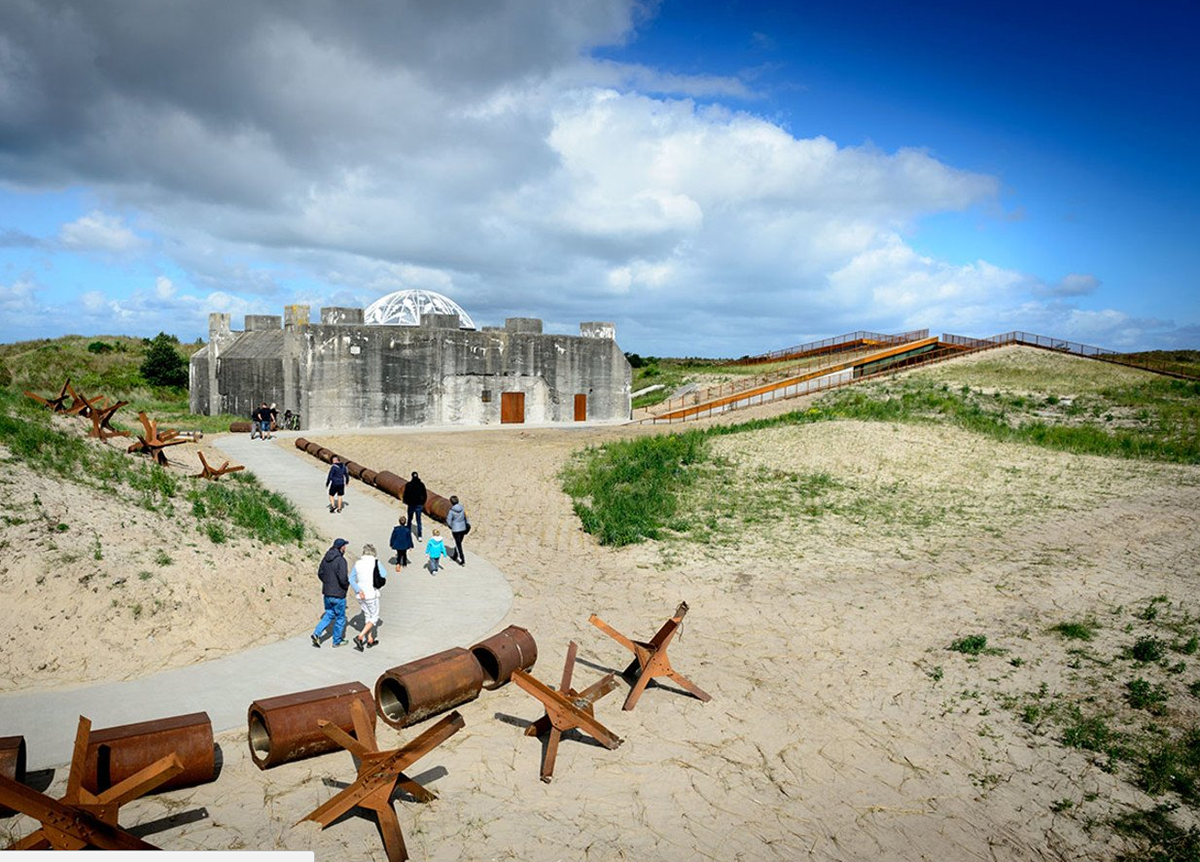 BIG linearly opens 4 simple cuts are made into the topography, creating a central courtyard for the museum. The 4 paths connect back into the existing network of trails in the dune landscape. The of the museum is rationalized to have a precise geometric form, erasing constructibility and at the same time being reminiscent of the surrounding dunes. 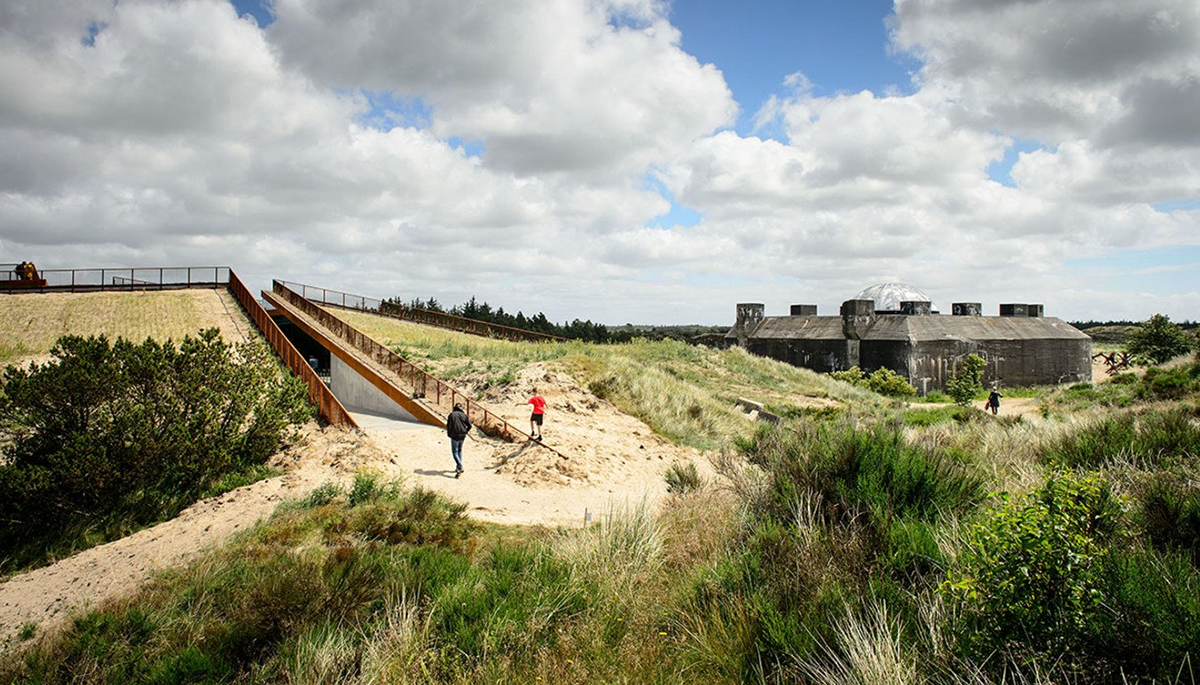 Visitors enter to the museum through a steel bridge and into the cafe. A common ofyer is located at the centre of the galleries on the lower level. Each gallery space consists of operational support functions such as toilets, cloakroom, and exhibition storage. 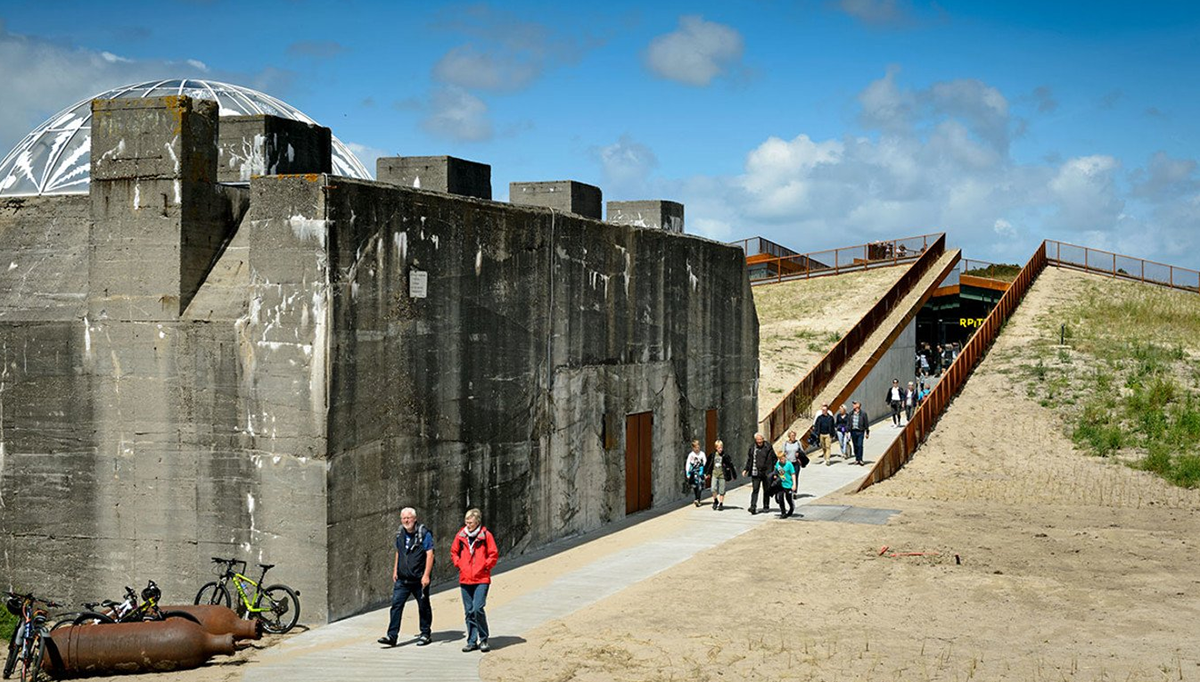 The walls between foyer and the exhibition rooms rotate generating a flexible museum. Rotation allows 4 skylights at each entrance bringing daylight into the foyer as well as creating an opportunity to independently access the 4 museum galleries. An underground tunnel connects back to the old Tirpitz bunker. 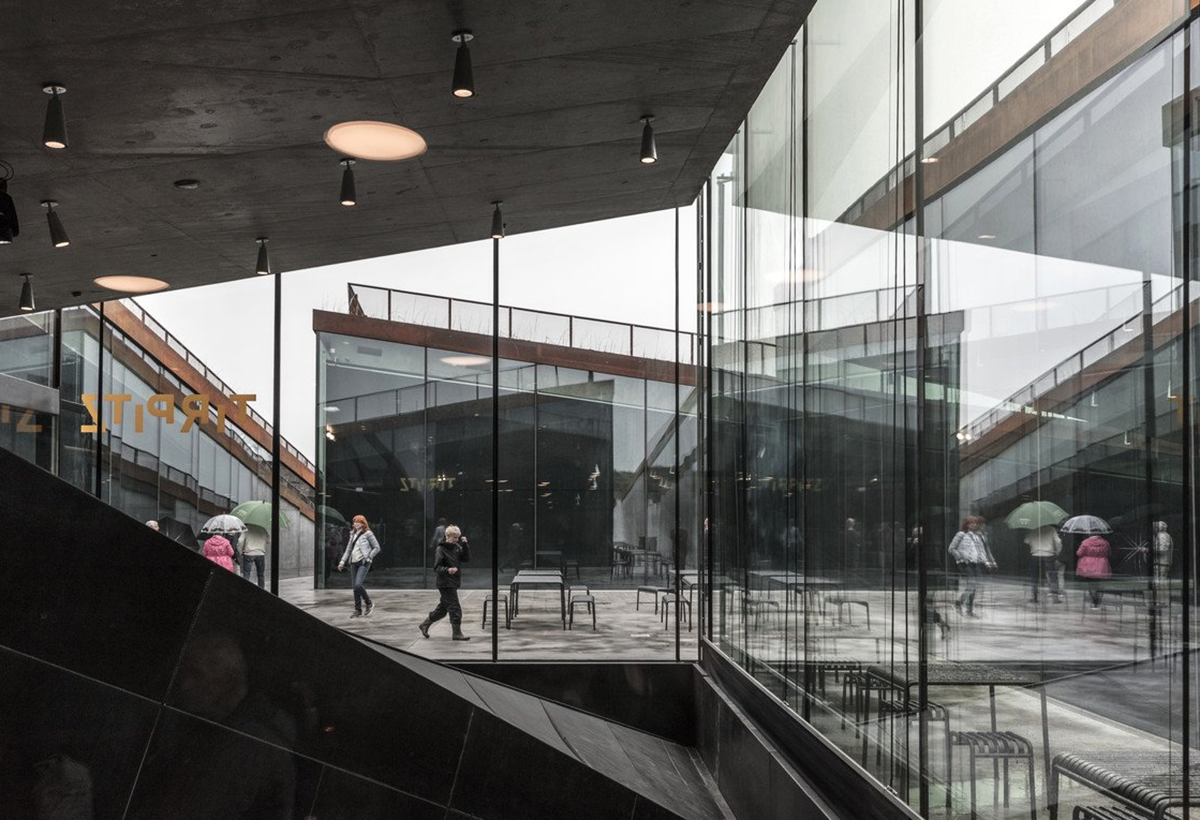 The building is built from four main materials and elements which are found in the existing structures and natural landscape of the area – concrete, steel, glass and wood. The walls of the exhibition rooms are made out of concrete cast onsite, supporting the landscape and carrying the fascinating roof decks that cantilever out 36 meters. 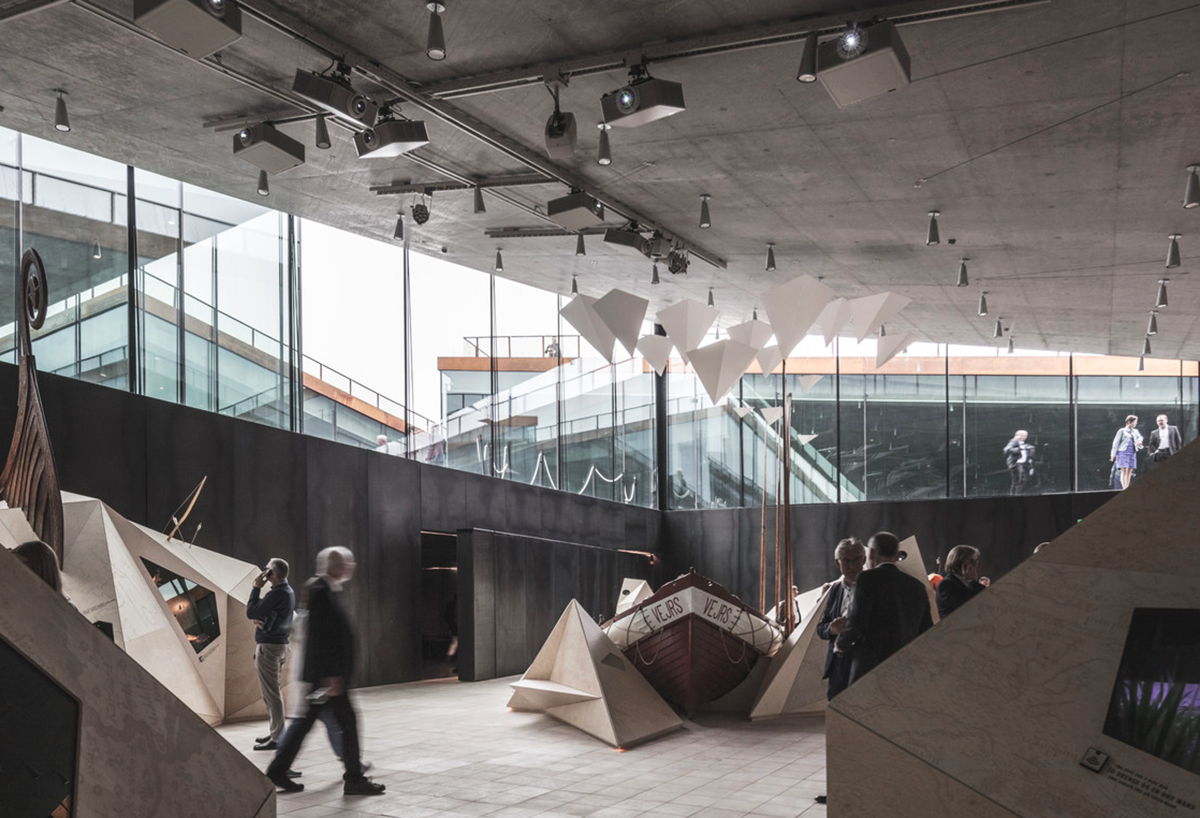 The largest roof deck weighs about 1.090 ton and the complex roof structure is designed by Swiss engineering firm Lüchinger+Meyer. The main interior materials used throughout the gallery spaces are wood and hot rolled steel, which are also applied to all the interior walls. 6m tall glass panels face the outdoor courtyard, allowing natural daylight into the four exhibition spaces. 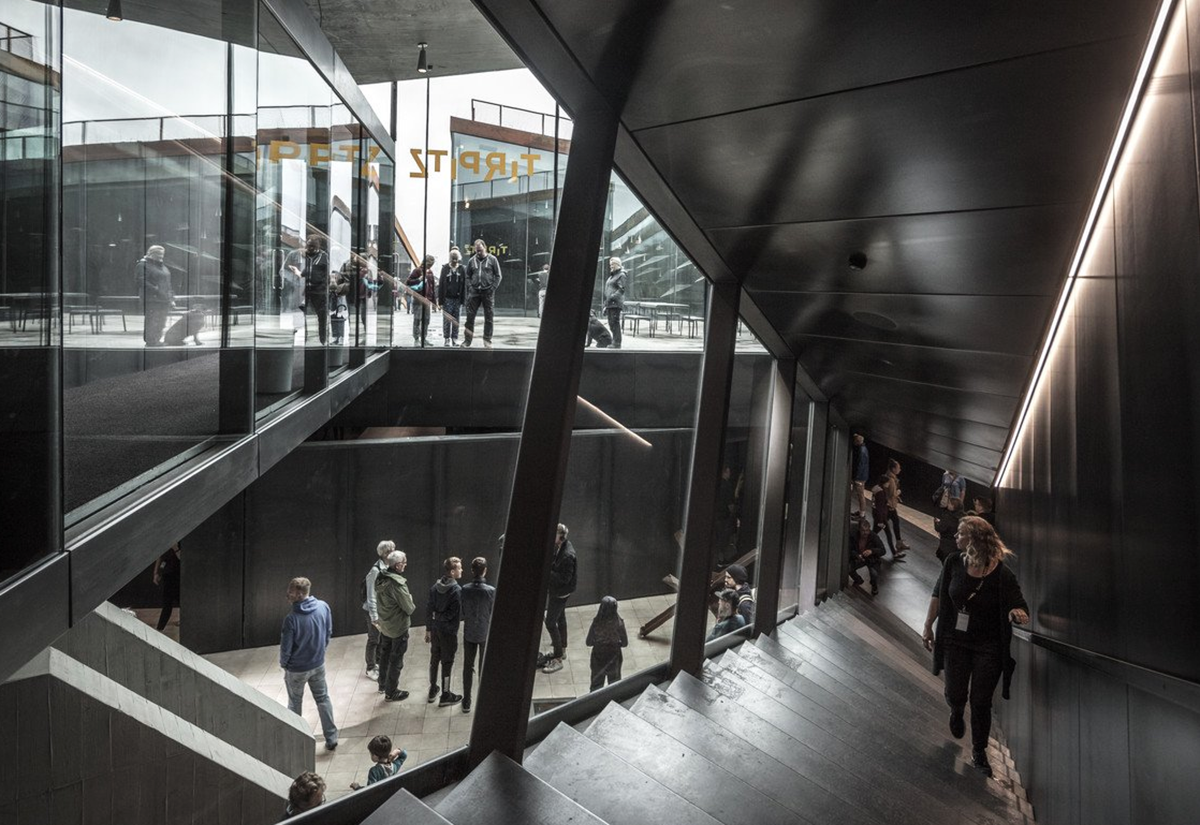 Visitors are able to walk from the sunken galleries into the historic bunker, which grounds the tale of an impressive war machine. In the dark visitors can play with light and activate shadow plays that reveal how the bunker should have functioned. 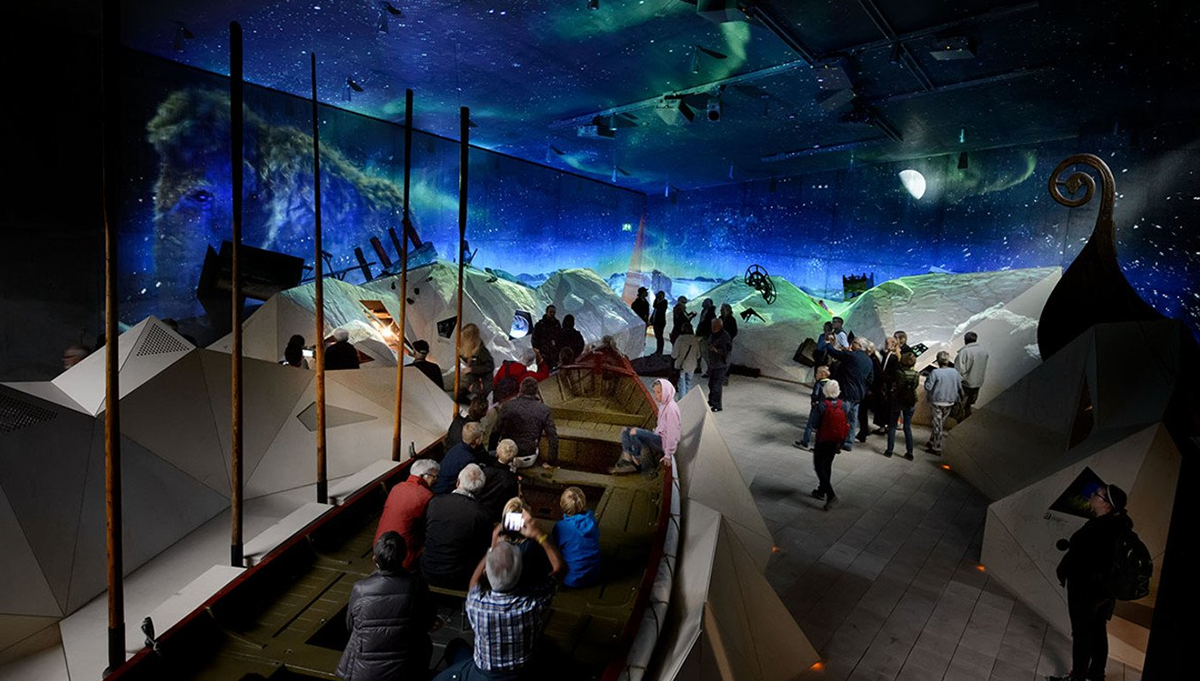 Dutch agency Tinker Imagineers was commissioned to design and produce the scenography for four rooms of the museum. The design of the four exhibitions is based on the rhythm of the building and the surrounding nature, creating a journey through the space and time of West Jutland. 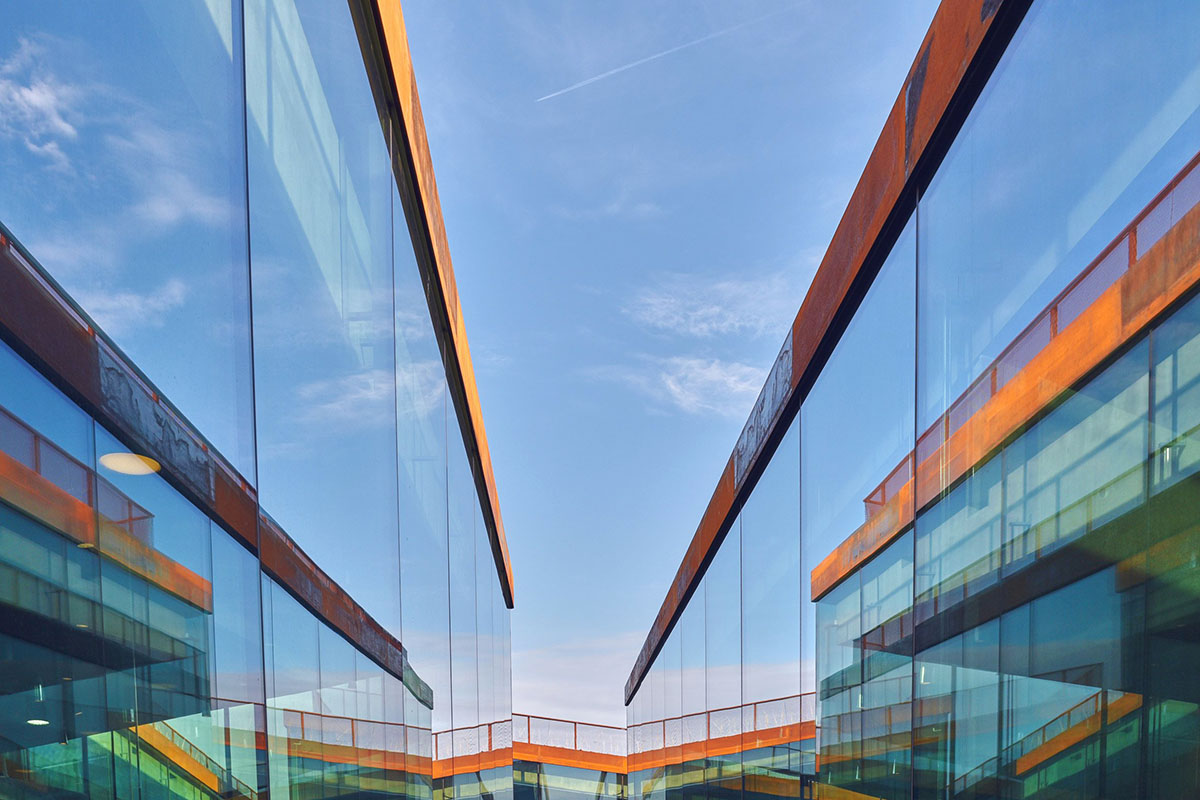 Every room has its own rhythm, beating in sync with its storyline: high and low tide, night and day, good and bad, hot and cold, the passing of time. West Coast Stories, the room that focuses on 100.000 years of local history, is turned into a night-time 4D theatre once an hour. 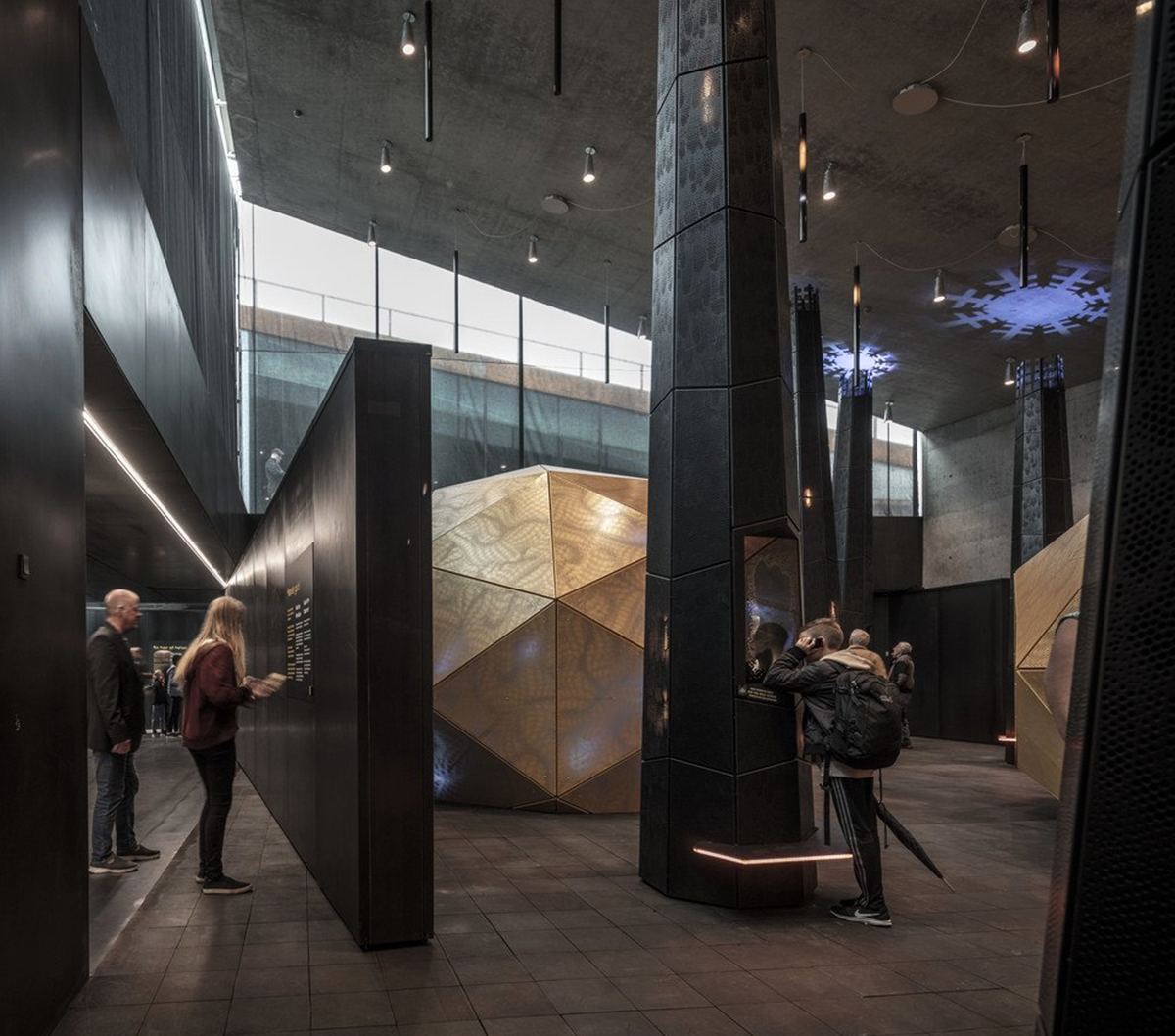 In the unruly bunker landscape of Army of Concrete, visitors get to discover the story of how the Atlantikwall came about in West Jutland through personal stories. A little further down, you walk into the enchanting steel forest of Gold of the West Coast. 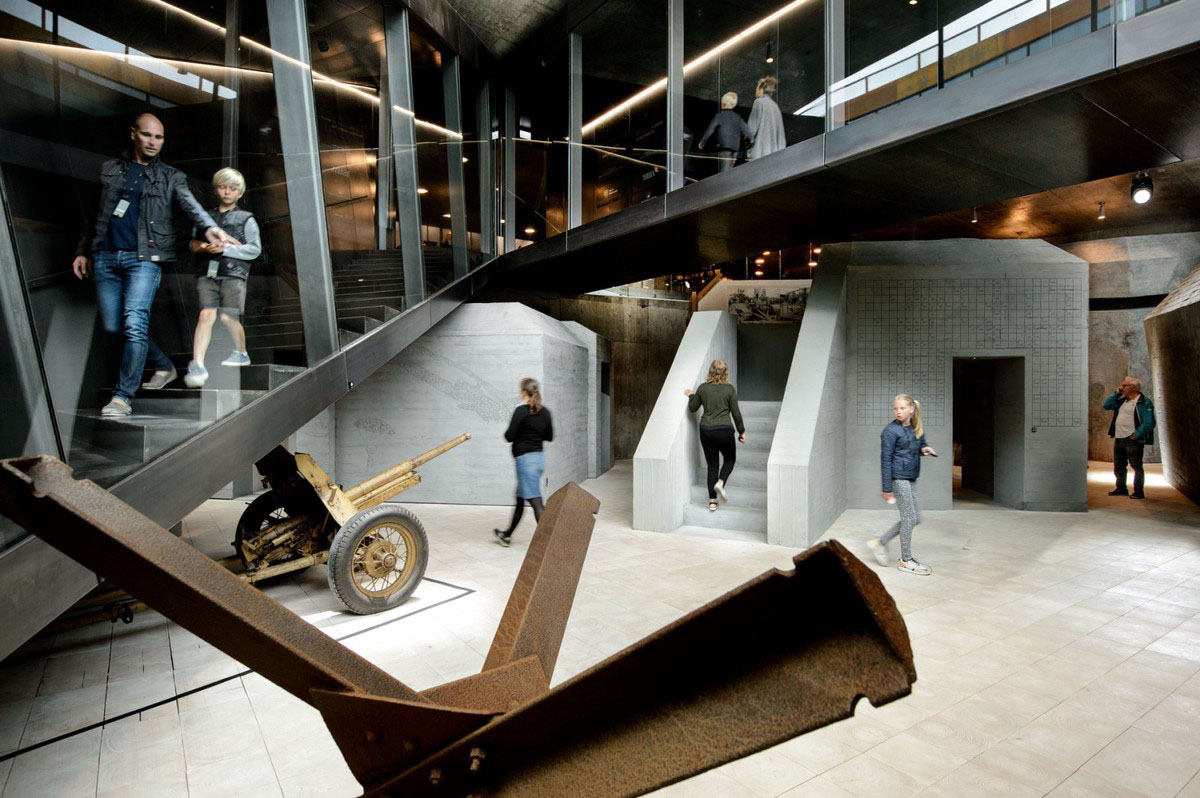 Along with its changing colours and sounds, the atmosphere of the rooms alternates between warm and cold: references to the history of amber. The historic Tirpitz bunker grounds the tale of an impressive war machine. In the dark visitors can play with light and activate shadow plays that reveal how the bunker should have functioned. 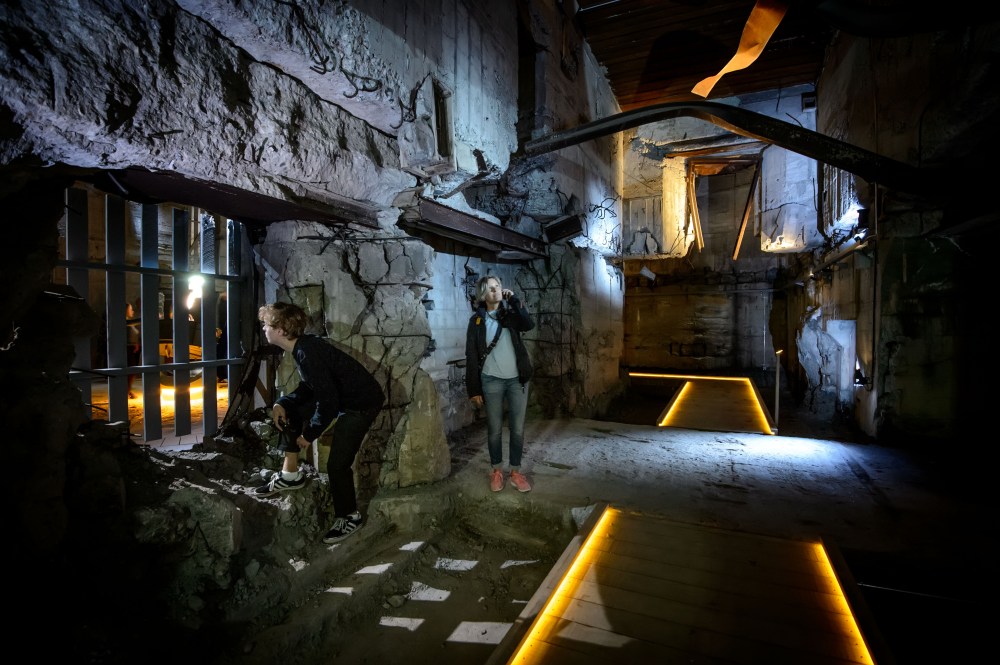 "While set by the heavy hermetic object of the WWII bunker, the new Tirpitz is a sharp contrast to the concrete monolith by camouflaging with the landscape and inviting lightness and openness into the new museum," stated BIG. 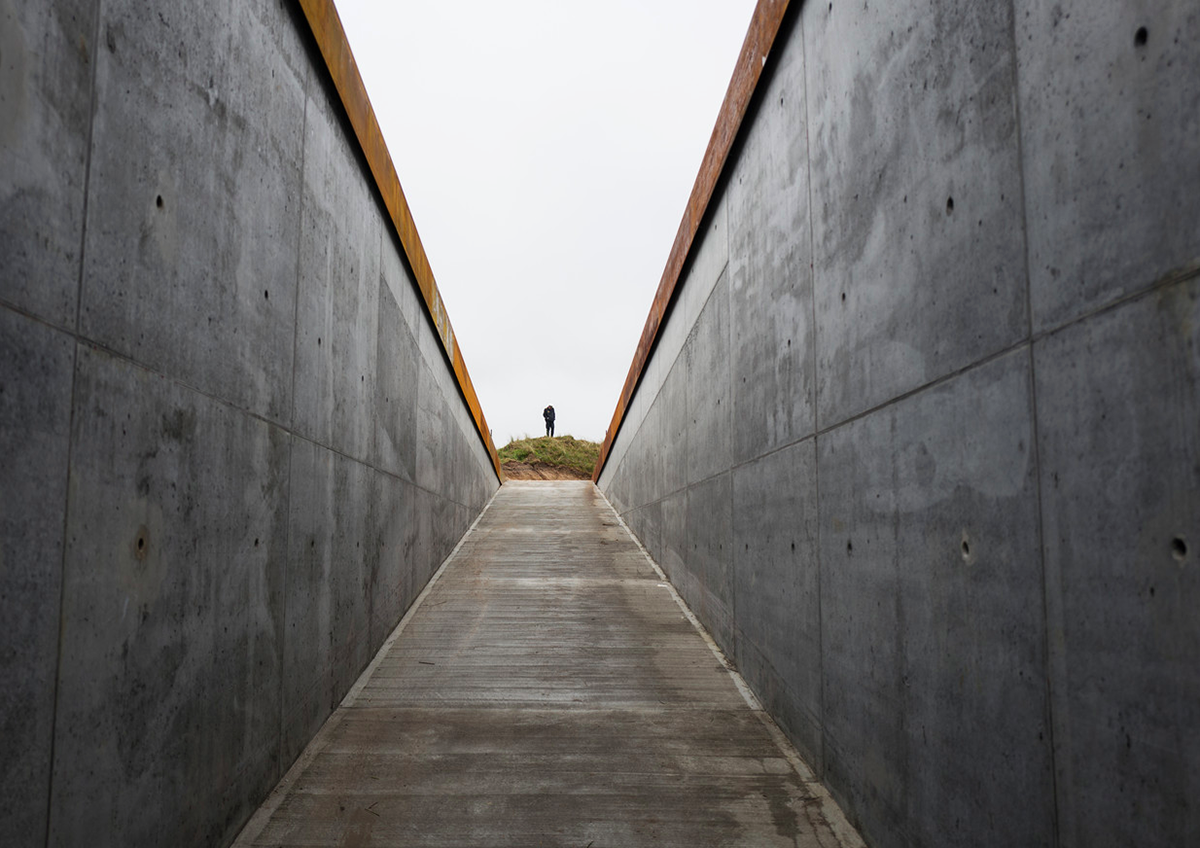 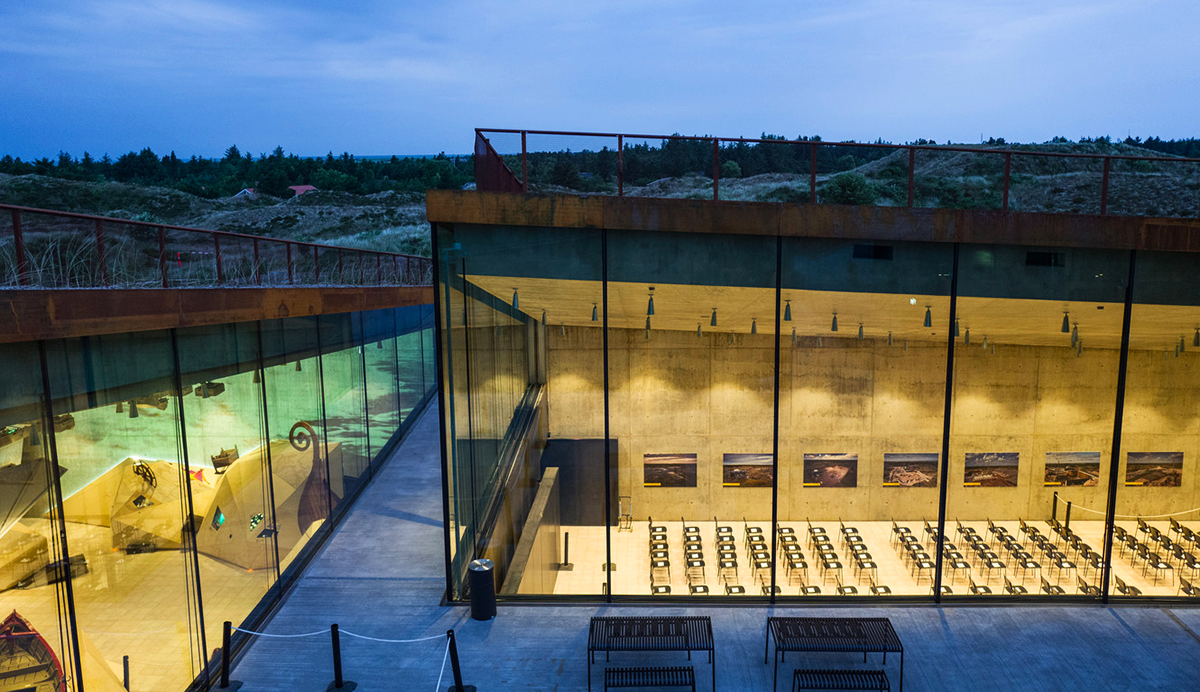 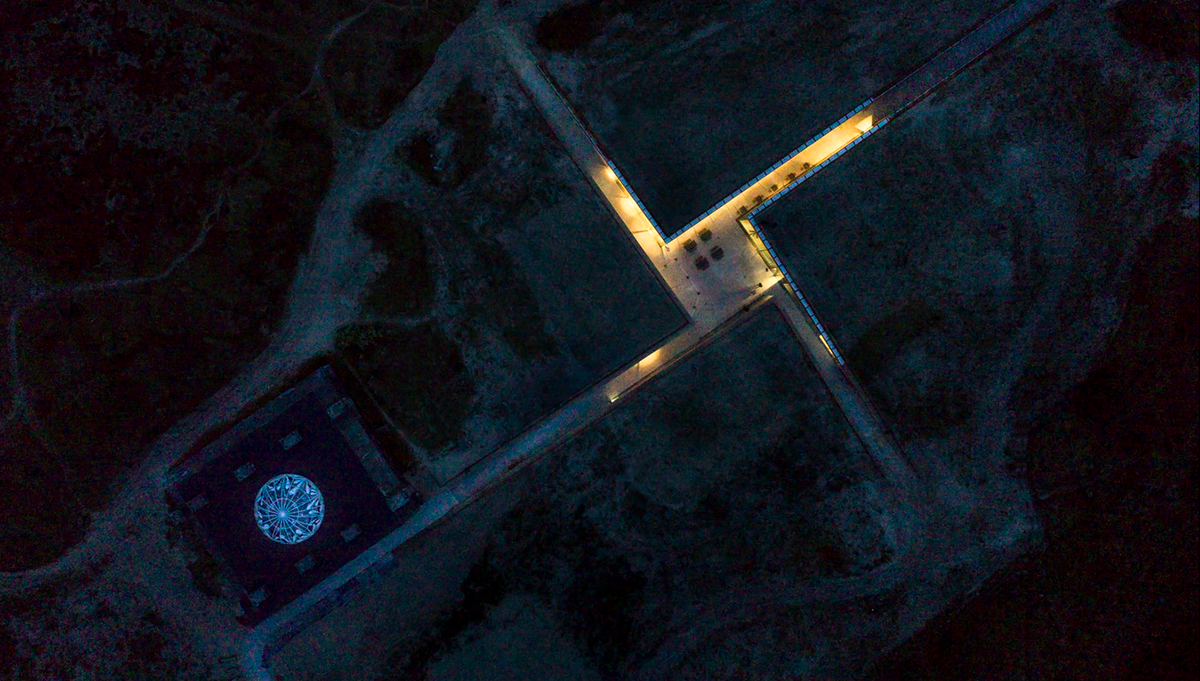 BIG was commissioned to design the museum in 2012 and the new Tirpitz opened to the public on the 30th of June 2017. BIG continues to design cultural buildings and museums around the world, particularly by integrating landscape with buildings. The Danish Maritime Museum is one of BIG's ground-breaking projects following a similar concept - embedded in the landscape, completed in 2013.

BIG are currently working on the LEGO House in Billund, MECA Cultural Center in Bordeaux, France, and the Smithsonian Institution Master Plan in Washington D.C.