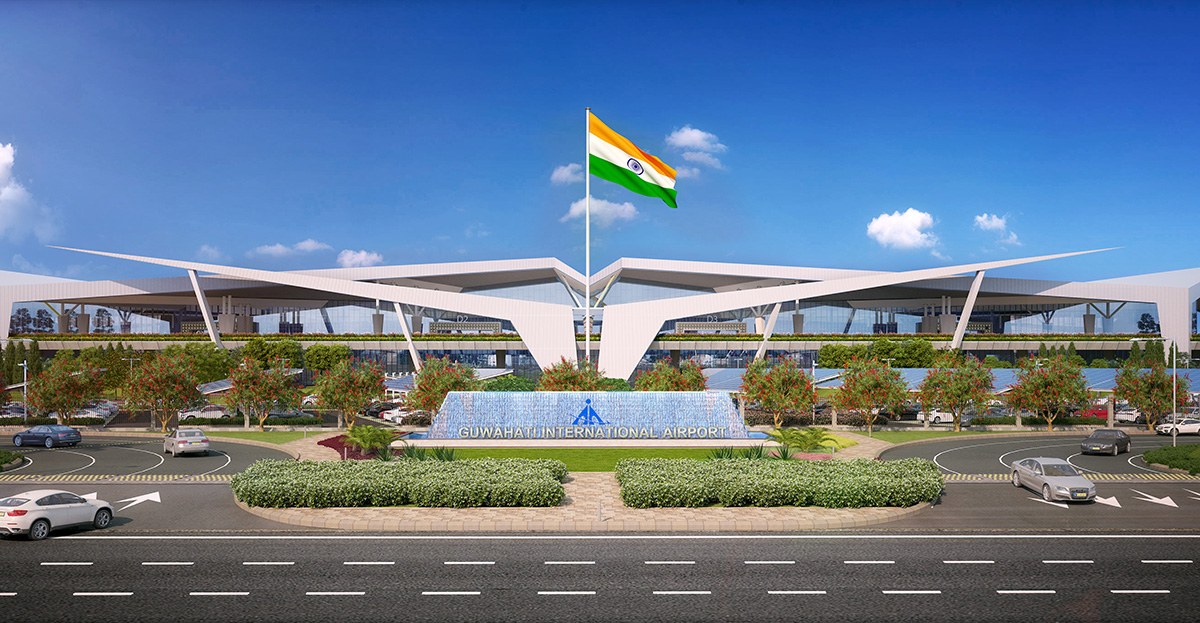 Gateways have been one of the most prominent features used to provide definition to precincts by providing a sense of departure and arrival, demarcating territory, and thus, community. They have often been used as symbols of identity, economic growth and governance. In recent times, in urban agglomerations, the idea of a gateway has acquired a more experiential value, where certain building typologies, by a means of providing a sense of ‘encounter’, whether by place-making or through the building programme, are able to justify the role of a gateway, thereby becoming an integral part of public memory.

Of these typologies, libraries, museums and cultural centres rely on display of information in an articulated narrative to create an environment that involves the participant within the play of region’s cultural and historic developments. Whereas, railway stations and airports are the first places of recognition for journeys, serving as a transition between the travel space-time and immersion into the urban fabric, and therefore, quite subtly, delineate the upcoming experience in an interpretative manner. Airports are particularly important, as they are the only source of communication and exchange between nations, and thus define themselves as "international gateways." 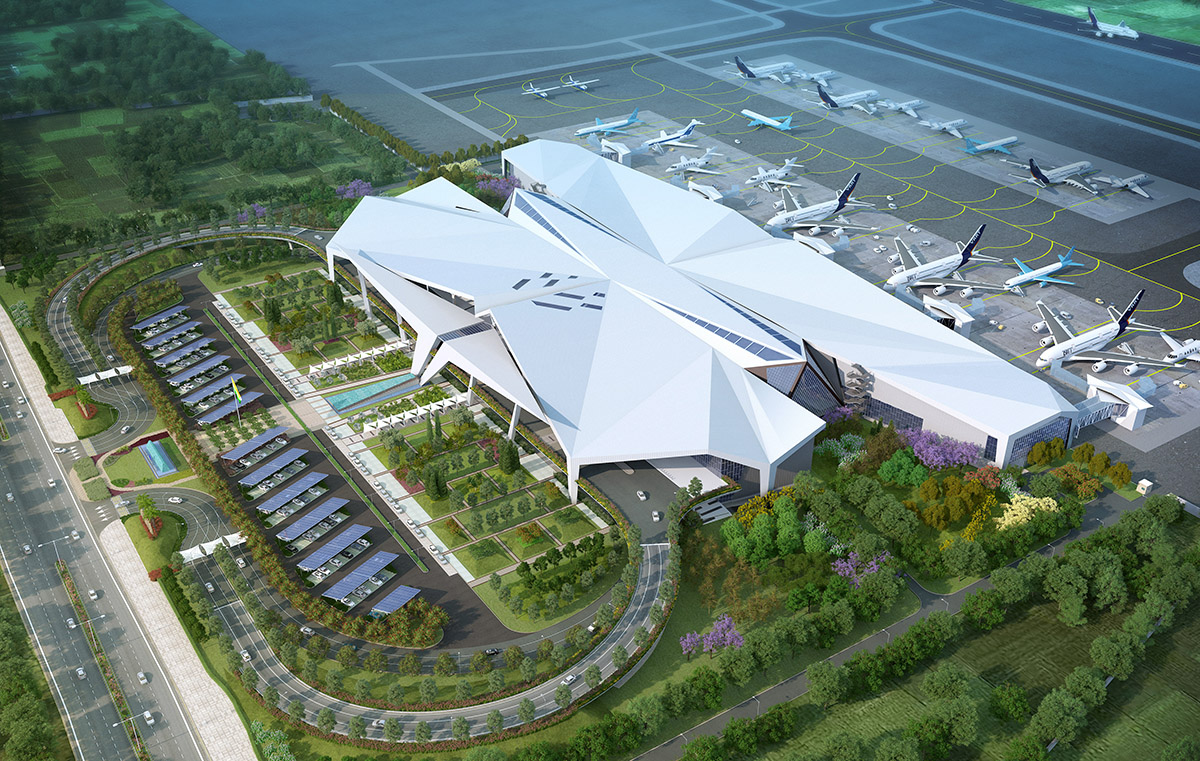 Understanding the above notion and meaning attached to spaces inside an airport, and expectations from its form, Delhi-based firm Design Forum International decided to create the new terminal of Guwahati International Airport, Assam, India, in a similar vein. With an intent to trigger moments of discovery and togetherness by enhancing user engagement, and a visible need to remain contextually relevant, DFI decided to infuse the building programme to display some clear productive aspects of the city, the state and the entire North-East India.

Situated at the altar of the land of the mighty Brahmaputra and ‘Maa Kamakhya Devi’ hill, the New Integrated Terminal Building at Guwahati International Airport is an ode to the ancient as well as reinvigorated spirit of Assam (which means ‘undulating’). It is the collective dream and effort of a team of fifteen consulting and design firms, including Aecom, Design Forum International, Integral Designs, Axis Facades, Gaurav Jindal, Alpana Khare Designs and CBRE. 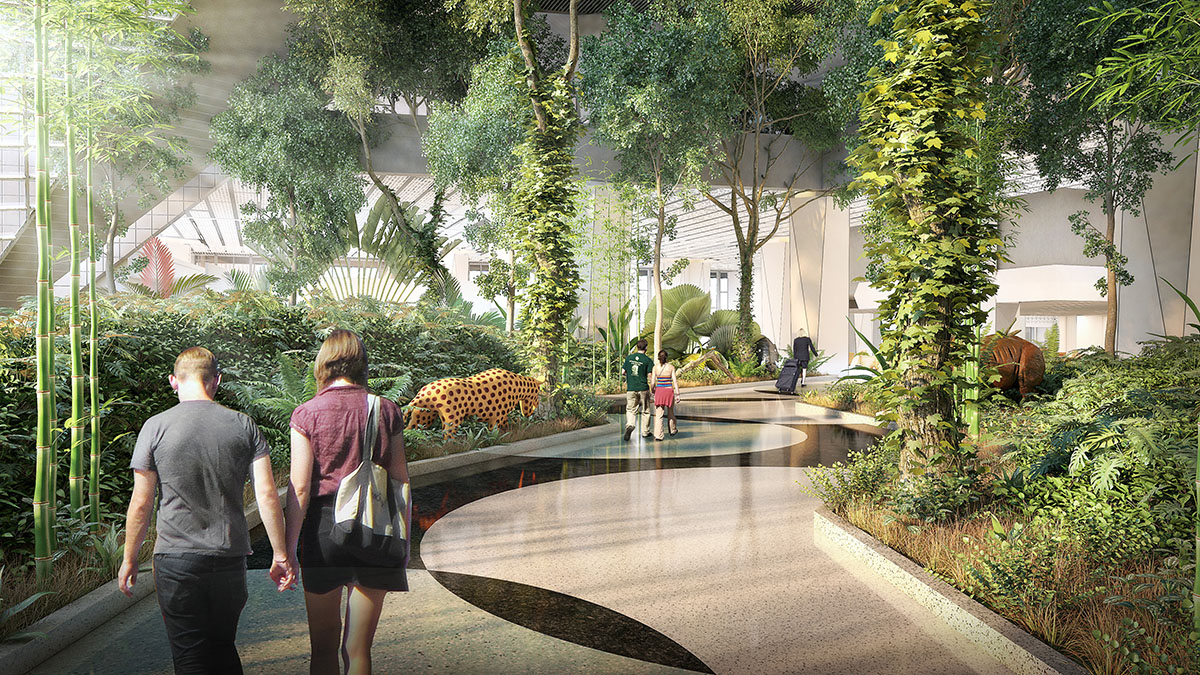 Since for any traveller, arrival hallway and lounge are the first spaces of 'encounter', it became necessary to understand the value of the particular time-frame, from airplane taxi to baggage-claim or immigration lines, and use it as the central inspiration in the formation of a unified design narrative. The architects noticed the general weariness of passengers and the prolonged toil that follows them, which urges them to pass through spaces in a haste without allowing themselves the necessary pause and moment of reflection.

Observing that during the flight passengers get good views of rich river-basins and rainforests surrounding the airport that invoke a desire and sense of belonging, the design includes a 90-feet high volume that houses an indoor rainforest as a spill-out zone, that they need to navigate through before being reunited with their luggage. The passengers aren’t led through straight symmetric aisles but pathways that gently traverse within the foliage, bringing forth interesting vistas to induce a sense of wonderment and solace. The fresh air, vivid colours and visual depth provide a mindfulness to refresh the traveller, bring back architecture to their conscious reality and nudge them to pay attention to the upcoming imagery. 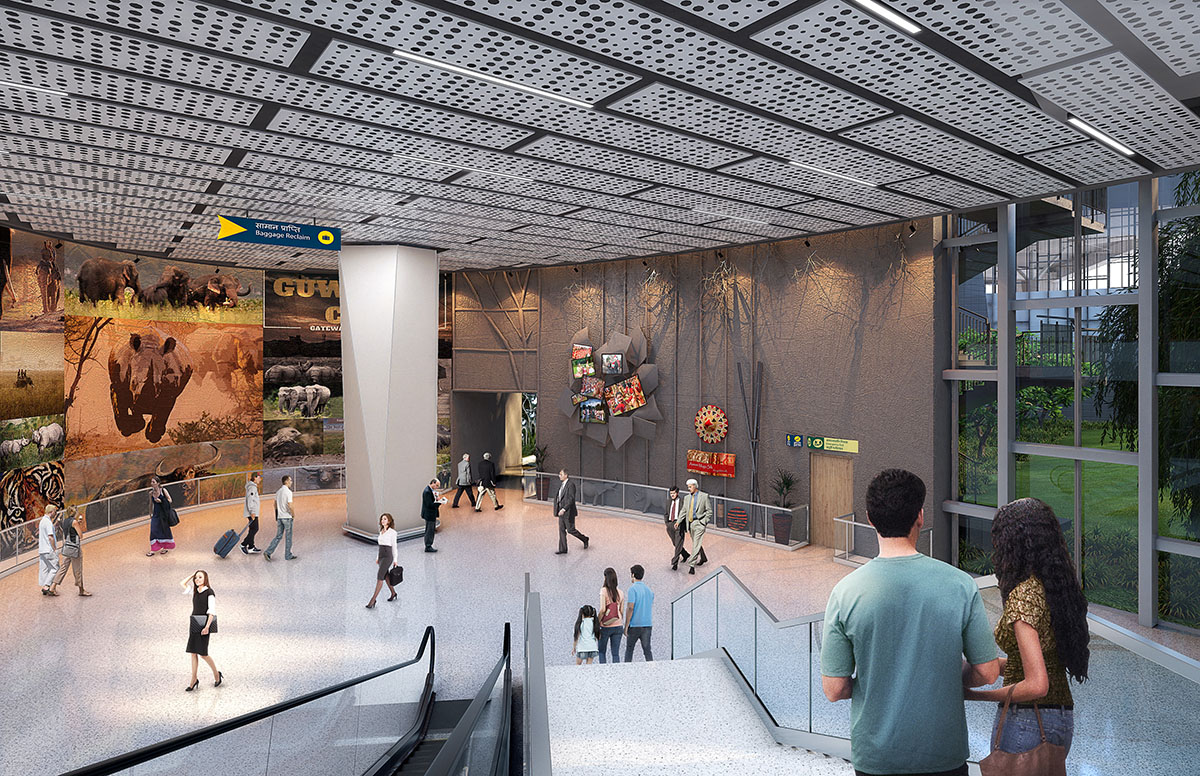 The entire physiognomy of the built spaces, and their edges, are defined by craft walls that have been conceived as a canvass for current and future trends. They display innovative products and artefacts. The Namaskar Atrium is a massive double-heighted space that creates an experience for the inbound visitor, with its walls adorned with the art and craft of Assam. Thus the design incorporates the inclusivity and engagement of a craft’s village, where all niches and corners are occupied with differentiated local delights, extending the experience of travellers beyond books and handicraft emporiums.

This projects the airport as an egalitarian space, where all forms and symbolisms are given equal recognition and opportunity, thereby drawing the traveller into a larger social narrative of the land. Spaces have been allocated for the artisans to sit and produce right at the airport, facilitating exchange of ideas and conversation. Engaging the craft, the craftsman, and the visitor, in one experience altogether, the crafts village augments the shopping and retail experience for the traveller, making the airport programme democratic. 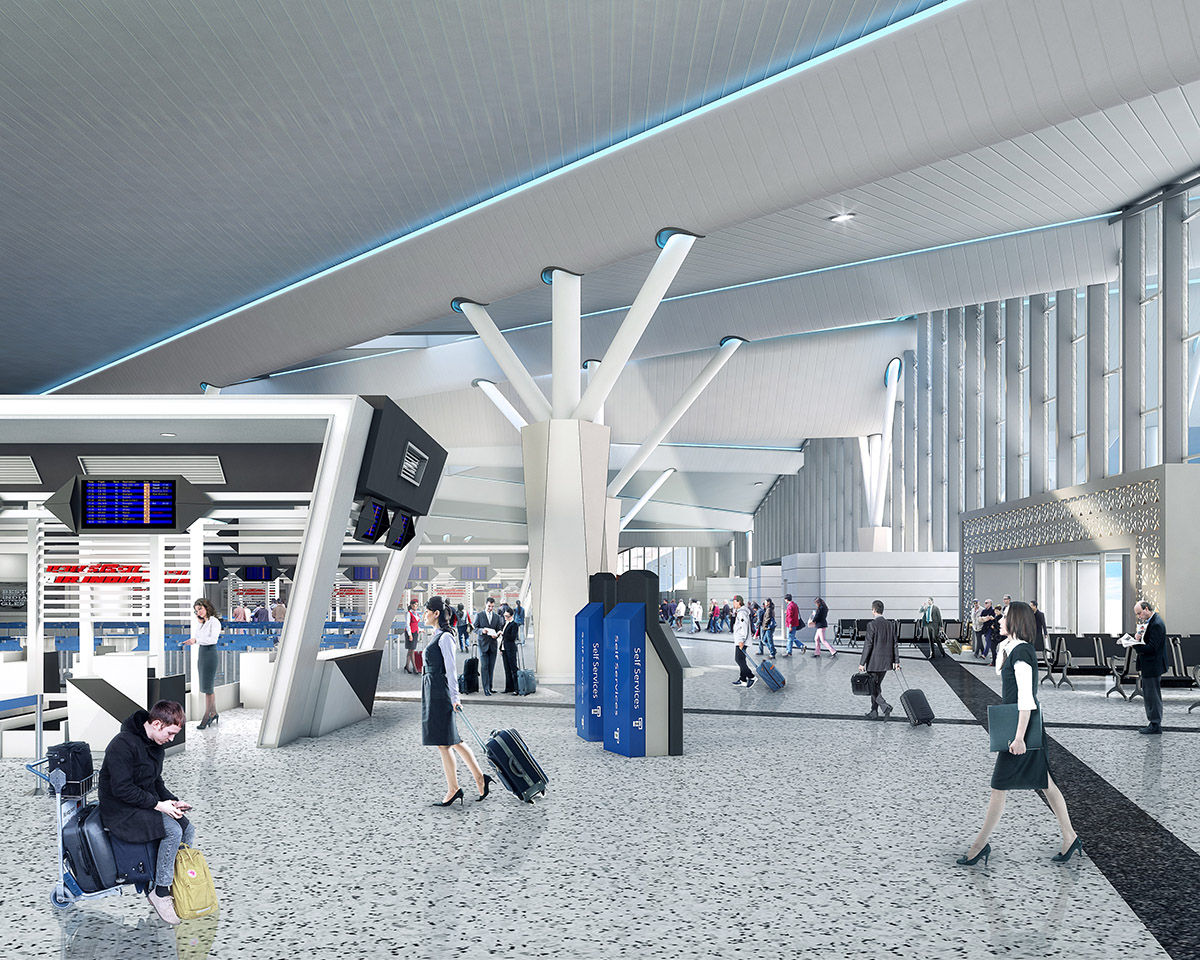 The Baggage Claim hall wall is an exercise in modularity with Origami aluminum panels that derive inspiration from the hilly terrain of the North-eastern states. Origami serves as a guide to the form development, and acts as a reminiscent to individual craftsmanship. The idea dominates the visual frame by finding expressions in the terminal roof, the flooring patterns, the column cladding, the theme walls, and even the signage design.

To enrich materiality, glass has been selected as the palette of choice for the façade – GFRC wraps around the façade’s tricky and smooth wide expanses, facilitating day-light penetration and visual uniformity. The use of terracotta tiles references the architecture of fort-like citadels and imparts stability. Terrazzo flooring has been employed in the interiors for its versatility and playfulness, whilst the use of granite ensures steadiness. Aluminum origami panels endow relief and sintered stone is used for wall and column cladding.

The Guwahati Airport is designed with 4-Star GRIHA rating parameters. The focus on sustainability is imbibed right at the design inception stage, with a conscious attempt to inter-weave the built form with the outdoors. The indoor forest is a physical manifestation of this thought: it is separated by a glass wall from the larger outdoor forest, fitting in like a tongue-in-groove with the terminal building, and becoming an integral and inseparable part of the built spaces. The car park structures are designed to be covered with photovoltaic panels that generate almost 500 KW of solar energy. 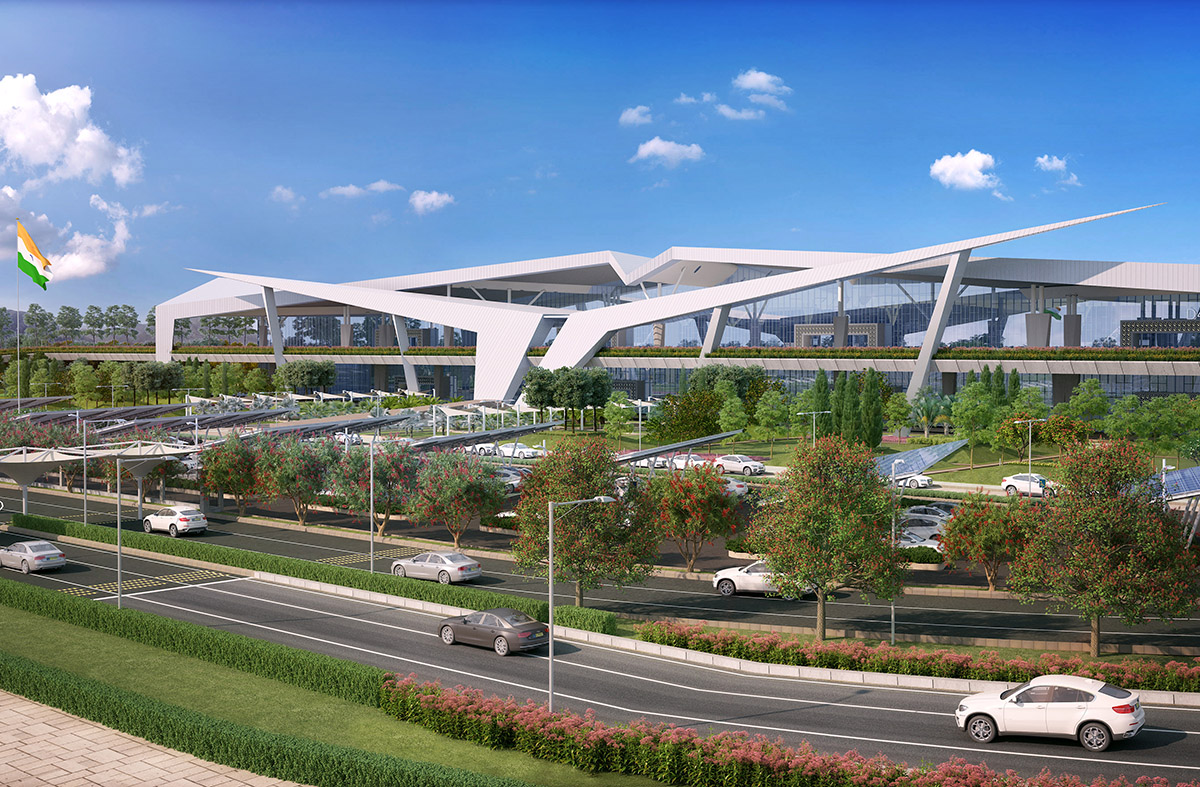 As a measure of sustainability, the landscape outside is chosen to imbibe the rural landscape of Assam within the confinements of airport authority. The tea-gardens define the driveway as passengers enter or leave the airport, as a mark of reverence to the context, serving as an inspiration for landscape design. They are positioned at the front yard along with a water cascade. The landscape, thus, weaves a story of its own and clings to the departing and arriving passengers as they walk through it before boarding their pick-up vehicles. The drive up to the departure level is reminiscent of the first climb up a mountain road after the tiring and relentless plains. The car zooms up as the plains give way to rolling earthberm greens.

It is in this particular moment, that the passengers reflect on the form of the airport in its entirety. The form of the structure takes inspiration from Icarus – the mythological figure who dared to fly. The majestic centrepiece is symbolic and looms over the departure concourse, its arms outstretched as it reaches out to the skies. The floating form doubles up as the canopy for the drop-off zone.

With this, the new terminal of Guwahati International Airport, generates a narrative of build spaces, landscape, materiality and form, to value the expectations of the region it is meant to serve and display. The wholesome narrative marks it as a building, that right from its inception, transcends its original function to borrow nuances of regional identity and infuse them with its own, to become a place within a place.