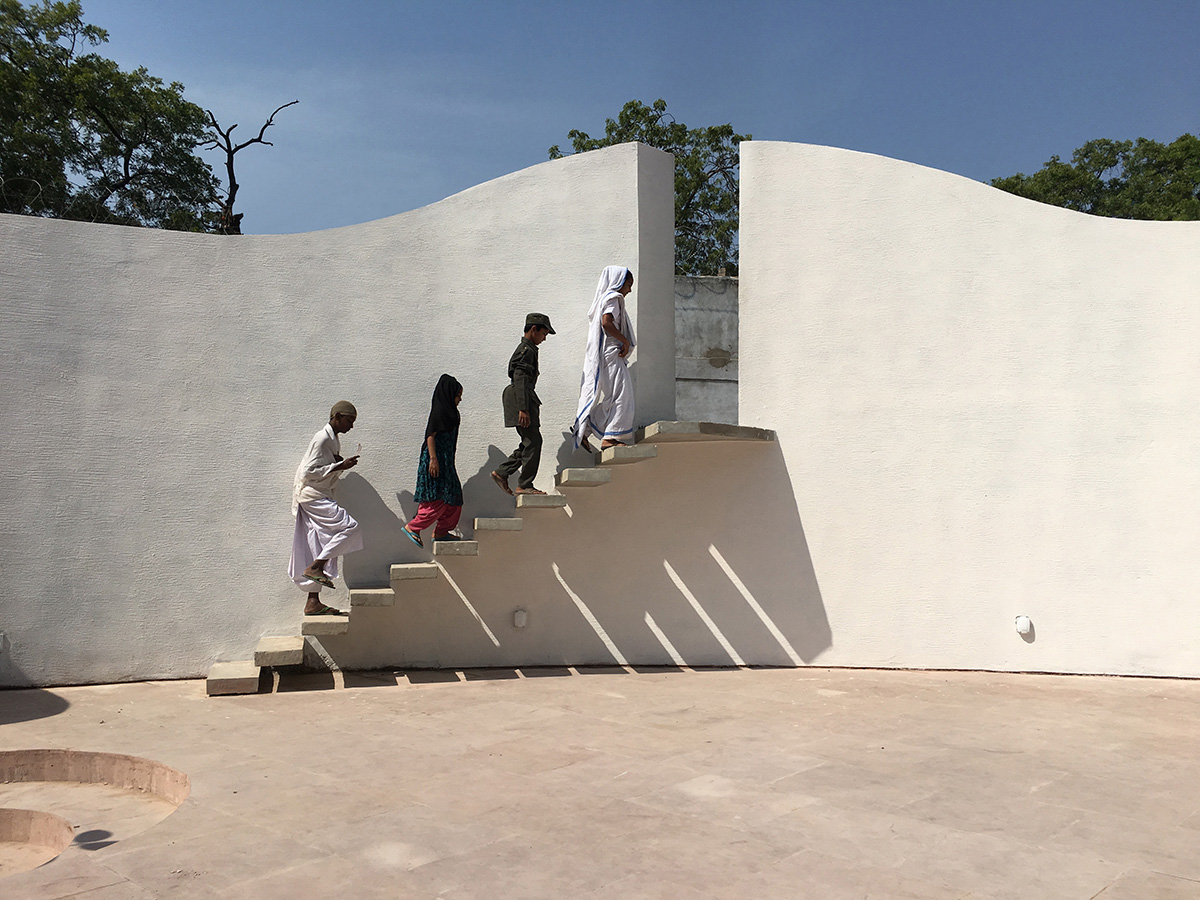 "Jai Jagat theatre construction was envisioned as part of the celebration for the 100 years of Sabarmati Ashram. It was in 1917 that Gandhiji decided to establish his community living here, near the river Sabarmati, between a prison and a crematorium. Since then Gandhiji’s strong vision on education was practiced at the Ashram - to develop body, mind, and spirit. The 1500 children that today live and study at Sabarmati Ashram are still taught the same philosophy." 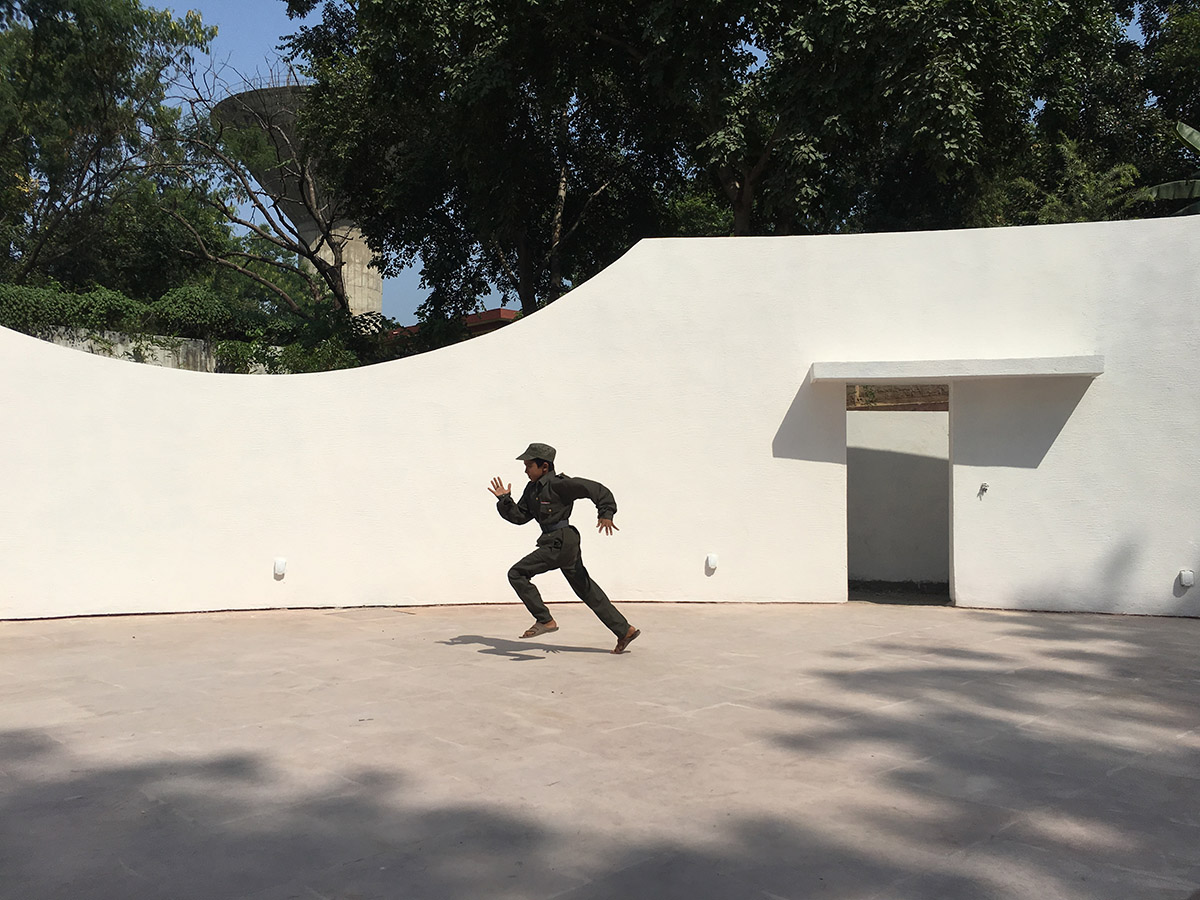 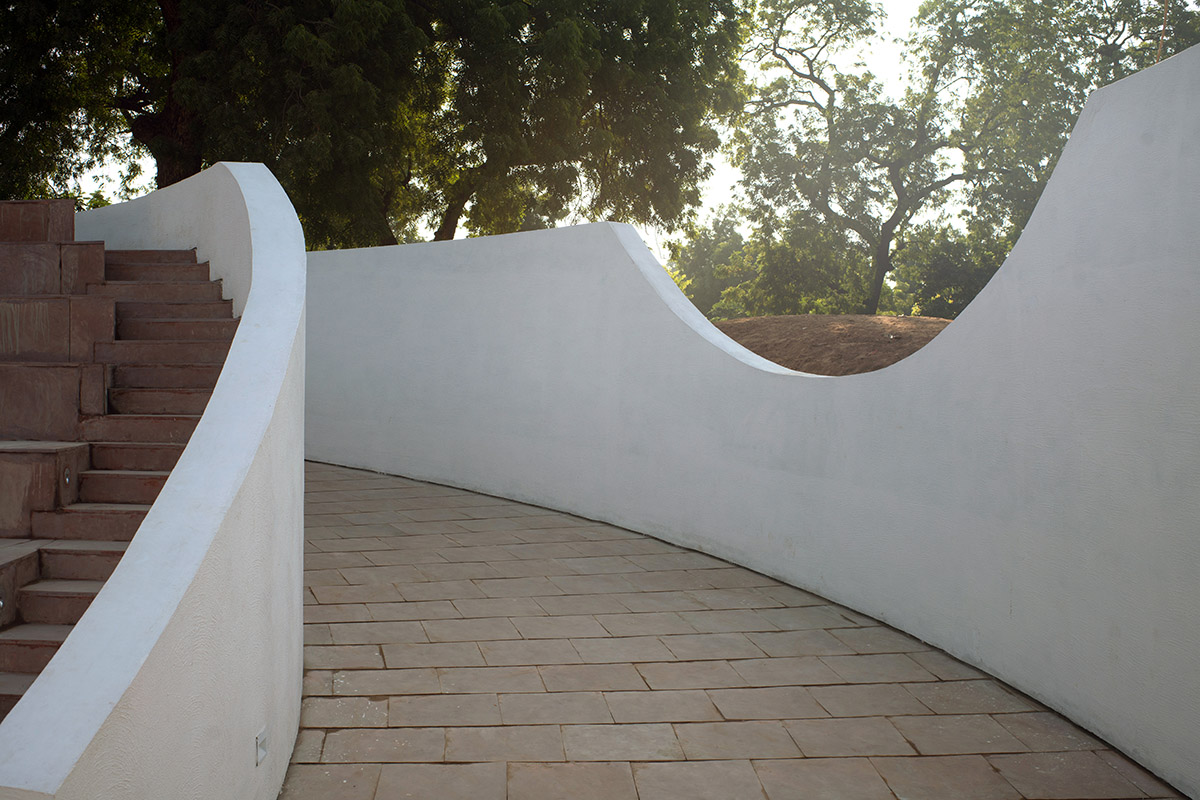 "Jai Jagat theatre is part of this education philosophy; it provides the students with an opportunity to practice their performance skills, to gain confidence while addressing the public, to work in a group, to be disciplined and to have fun. Together with children from the nearby communities, the students of Sabarmati Ashram no longer have to travel to far places of the city to rehearse their plays. Jai Jagat theatre is now the place where they practice their performances, do group exercises, or play games. It is a place for expression. It is a landmark for an education that is, as Gandhiji says, 'an all-round drawing of the best in child and man in body, mind, and spirit." 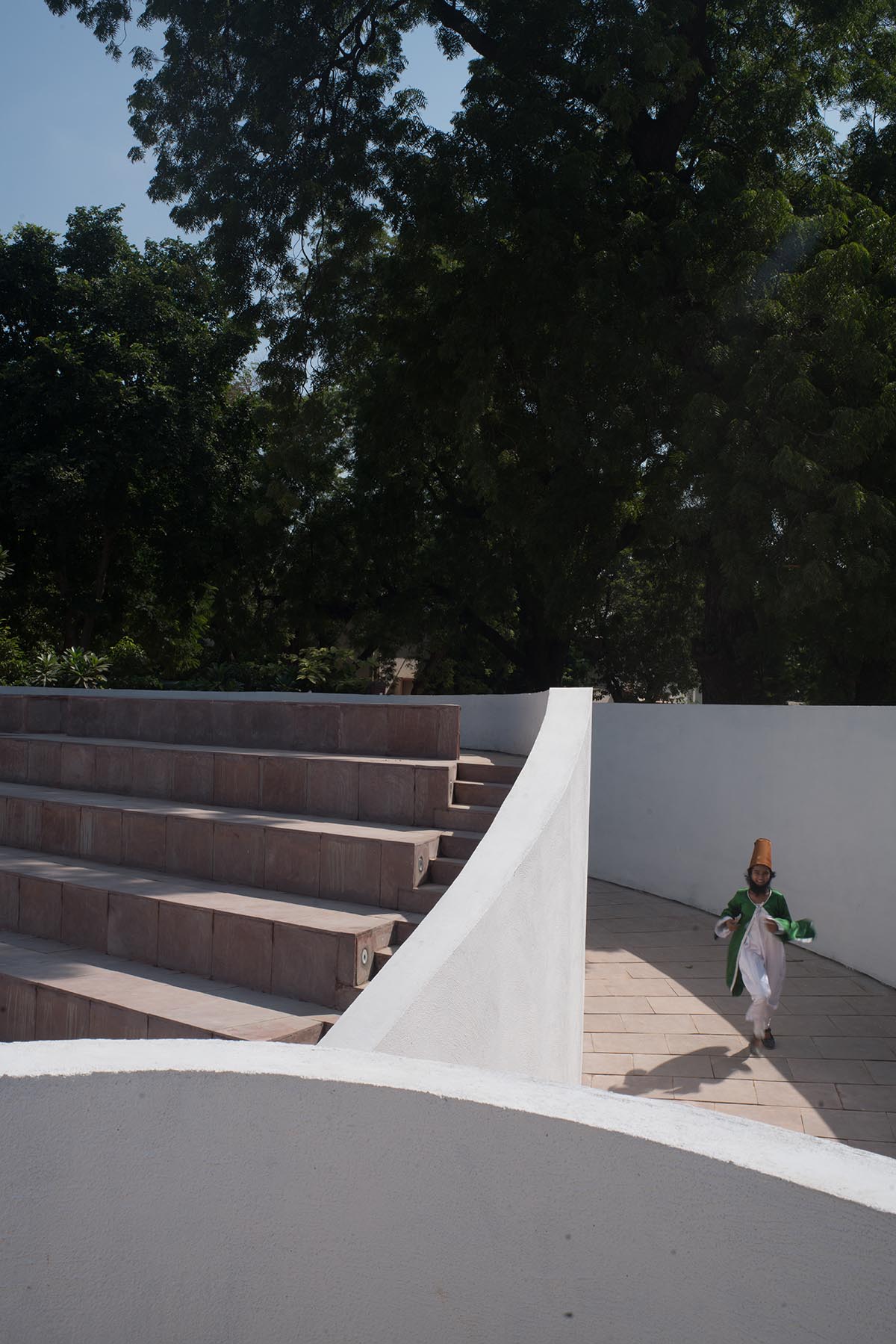 "The site where the amphitheater stands is marked by high Neem trees and simple grounded buildings. One of these buildings is the Montessori school. This school was established at the Sabarmati ashram around 1936, after Gandhiji met Madam Montessori at London in 1931." 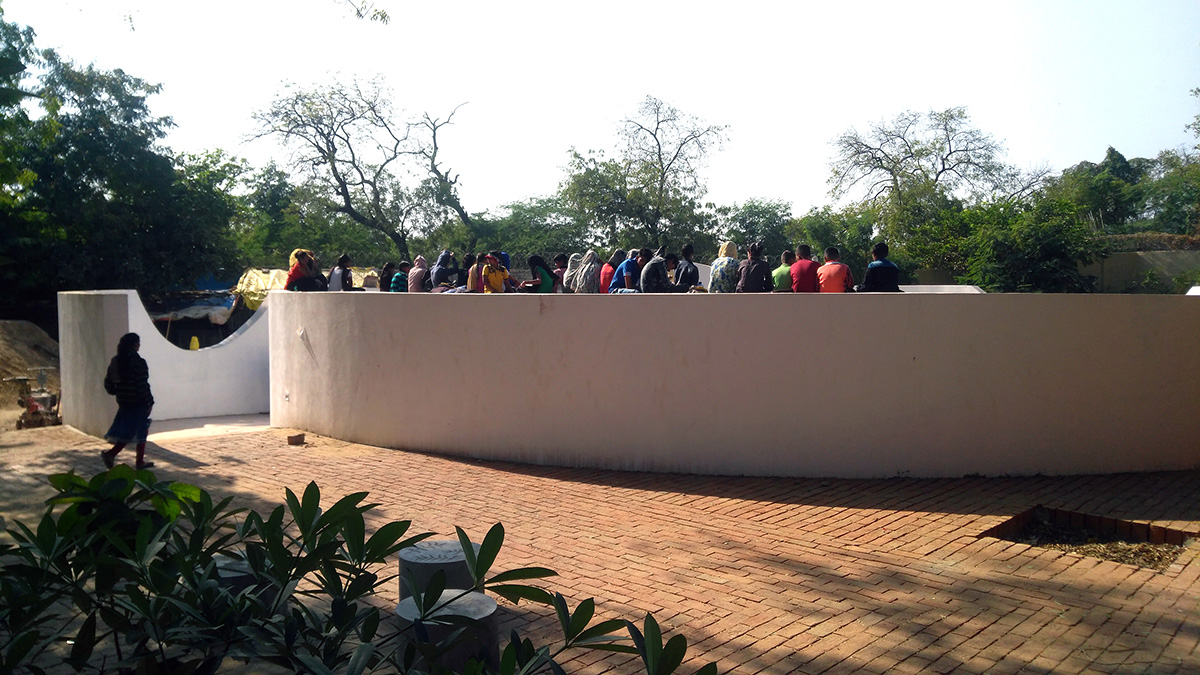 "He was impressed by her education method (child-oriented and focused on the development of the whole child) and decided to implement it at the ashram. The school worked for many years and it was recently converted to studios for arts education." 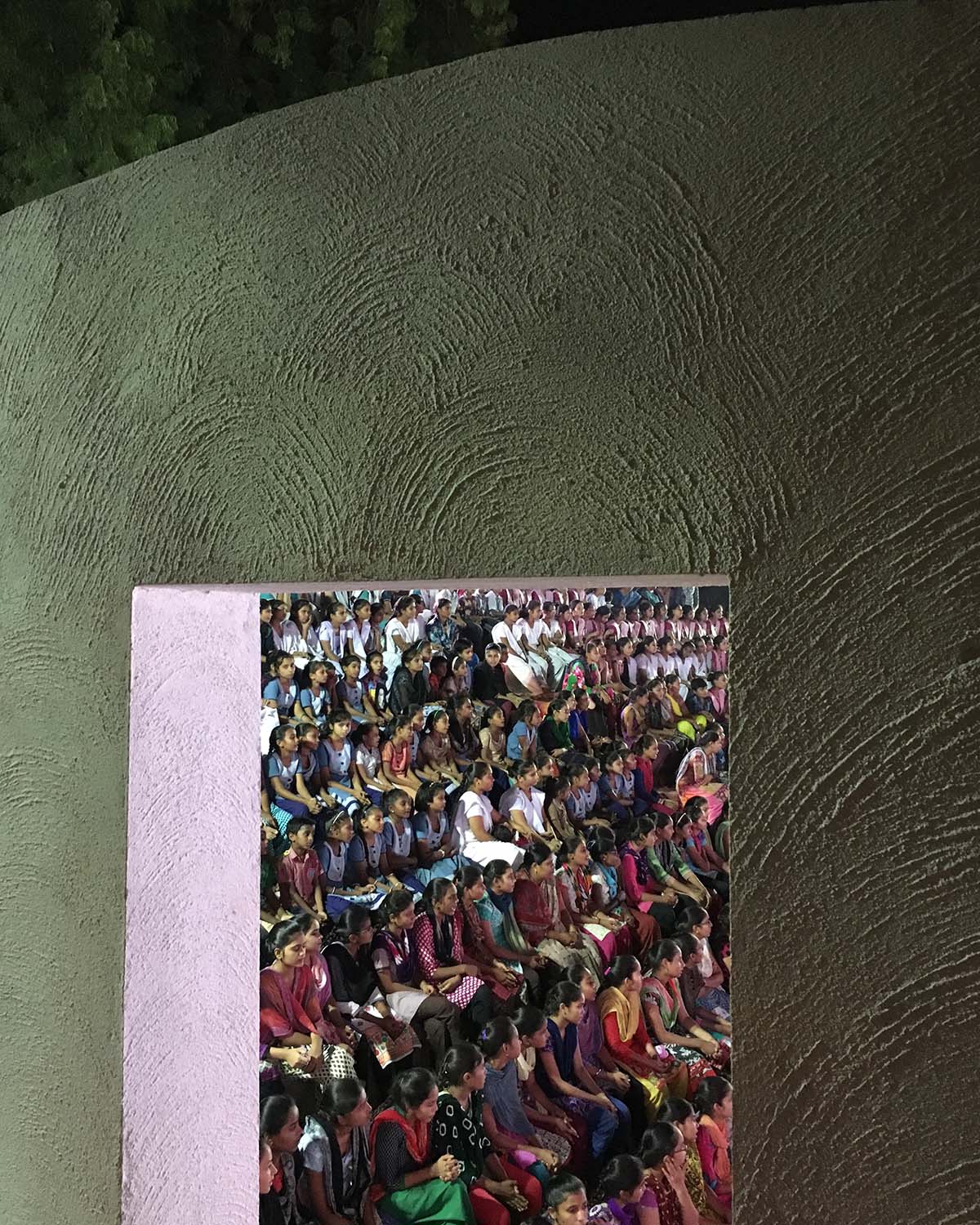 "The trees that surround the building provide shade to the area and house an incredible variety of birds and other animals, creating a very special and peaceful environment. The architecture of the amphitheater (located next to the Montessori school) aims to maintain the spirit of this place." 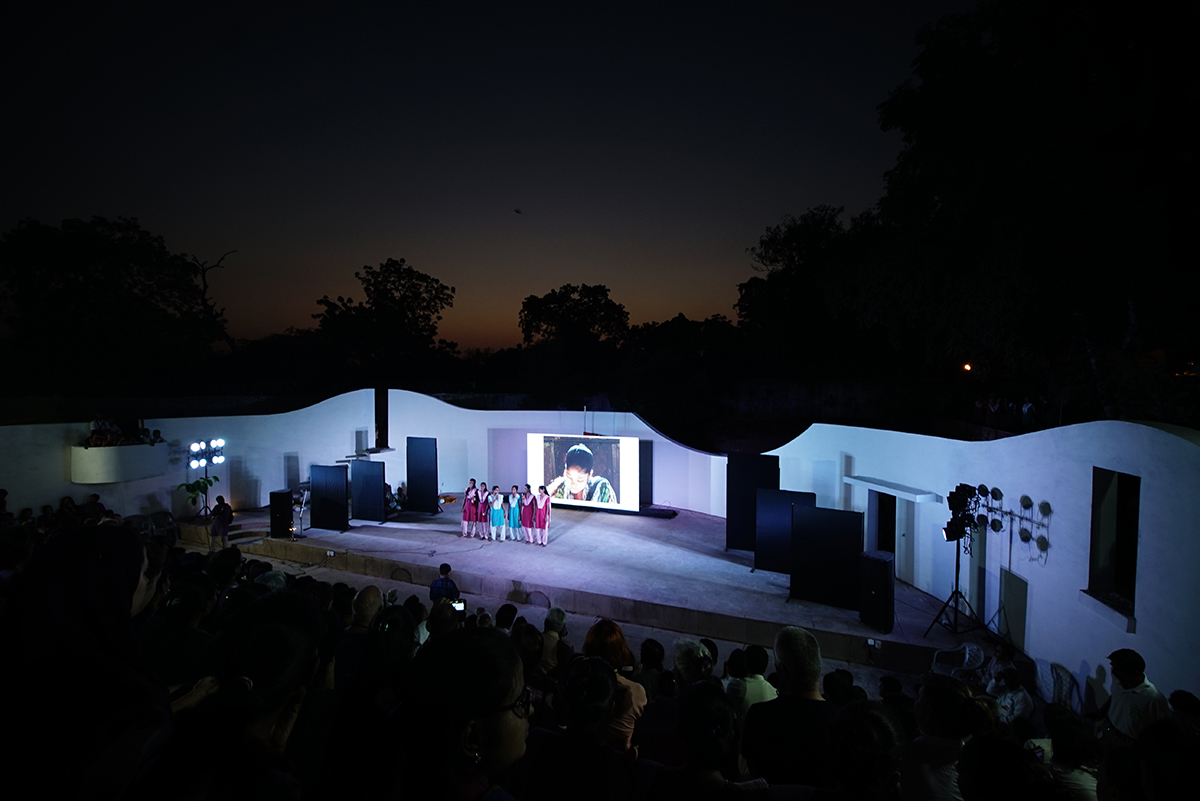 "From outside, the theatre is just a simple white wall with a modest humane scale. The route until this point is made through a brick pathway, designed below the existing trees and connecting other buildings of the ashram, as a library and a school. Along the pathway, the different niches invite people to sit and observe the nature." 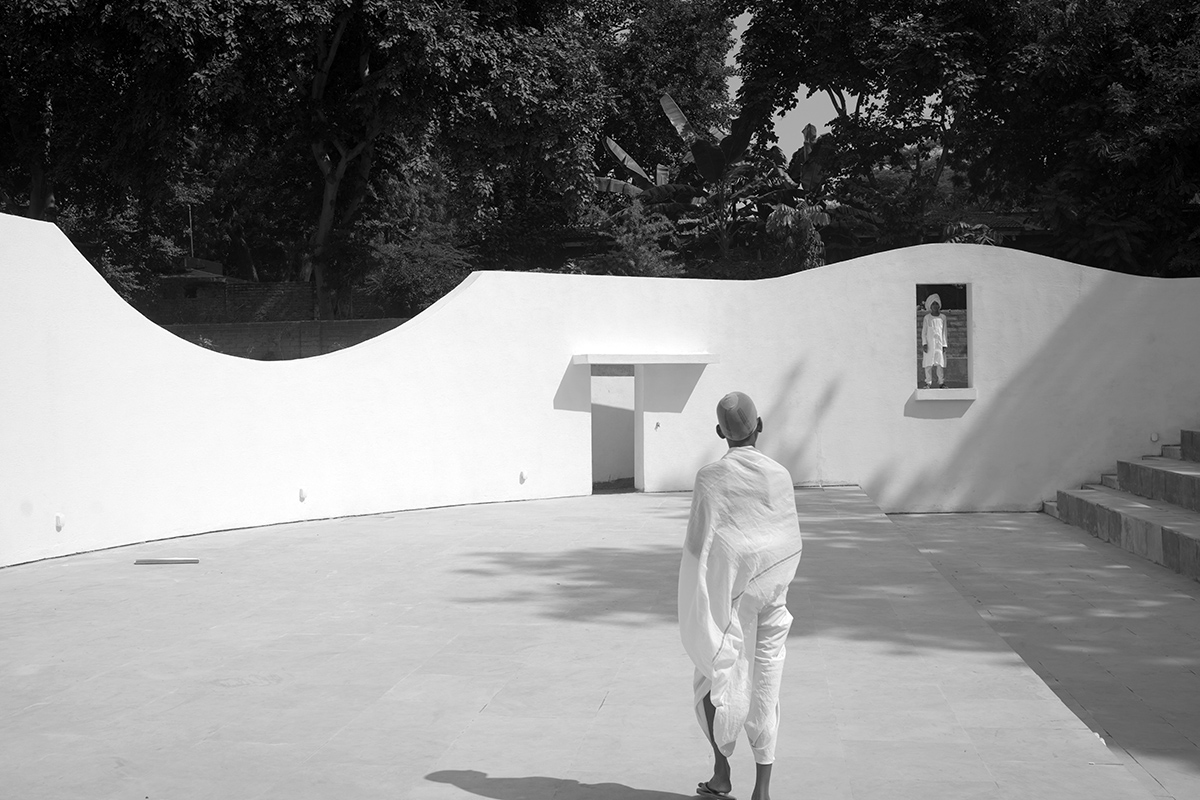 "Bigger spaces with seating areas welcome small gatherings or a pause for eating together. This path slowly transforms into a larger area, a plaza, that anticipates the amphitheater and that becomes a foyer, a space for events or for informal rehearsals. The entry to the theatre is done through a gap between two moments of the wall and a ramp leads us down to the center of the space." 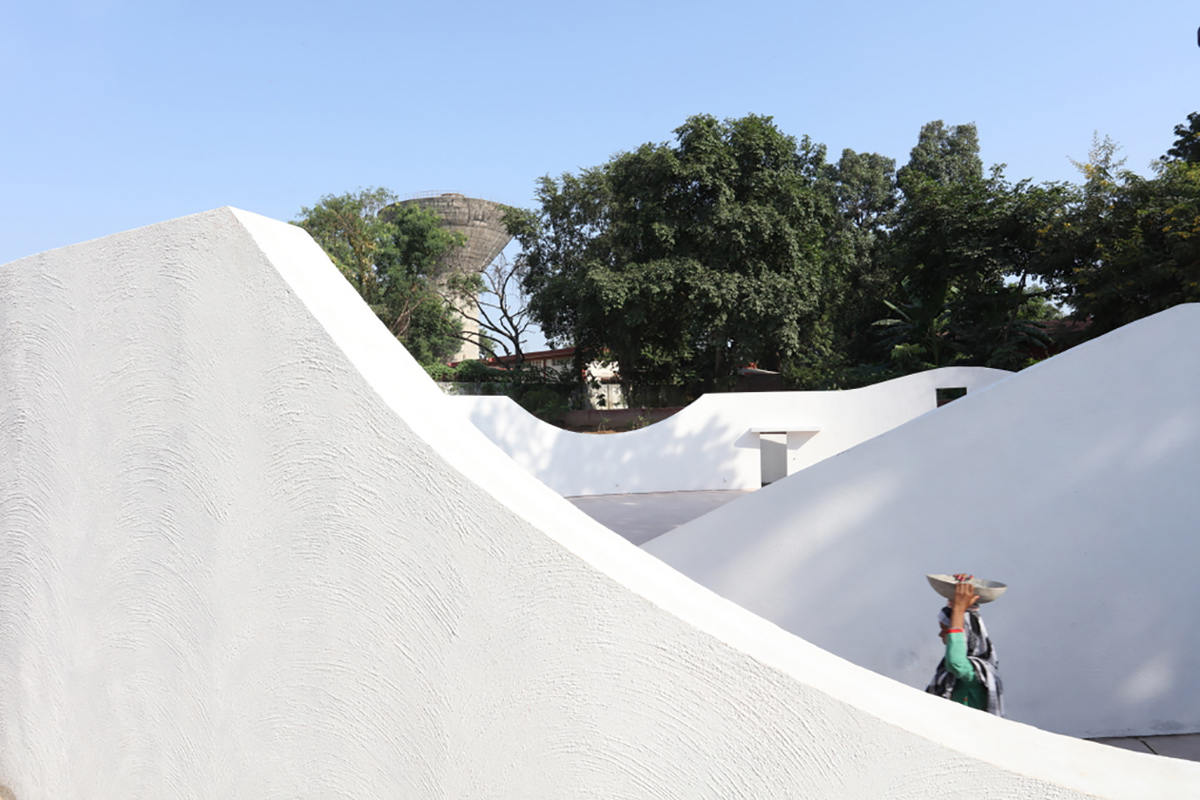 "With a movement of a spiral, this wall unfolds and surrounds the stage and the audience, placed at a level below ground. The surrounding trees and elements, like the school or a high water tank, are still present in the interior of the theatre because the wall that contains the space undulates and opens up to create points of view towards the outside." 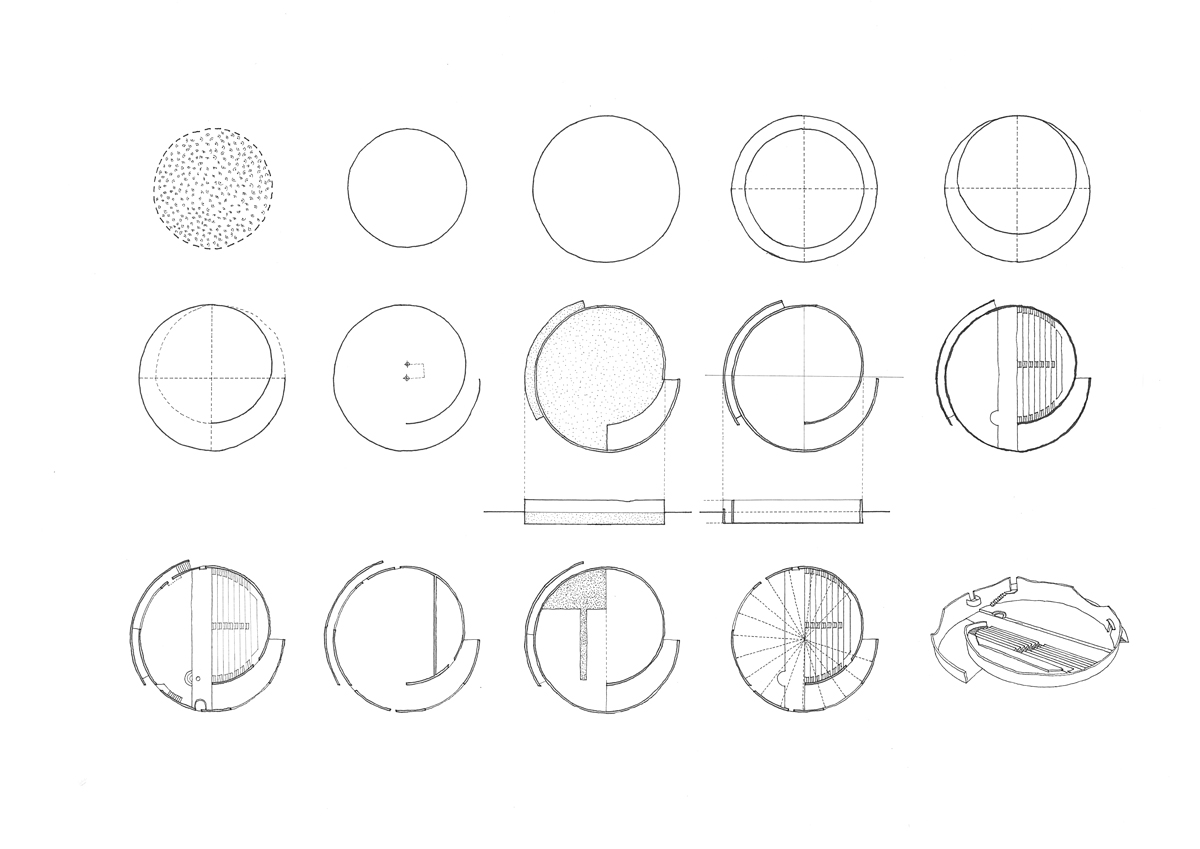 "The wall has different moments and openings, it is fun, interactive and at the scale of the children. It was thought to participate and enhance the plays, to be part of the scenario and to provide different points of entry and exit to the shows (a Juliet balcony, stairs or an opening). But it is also modest and silent, and therefore can be used as a place to meet, to talk or to just be alone." 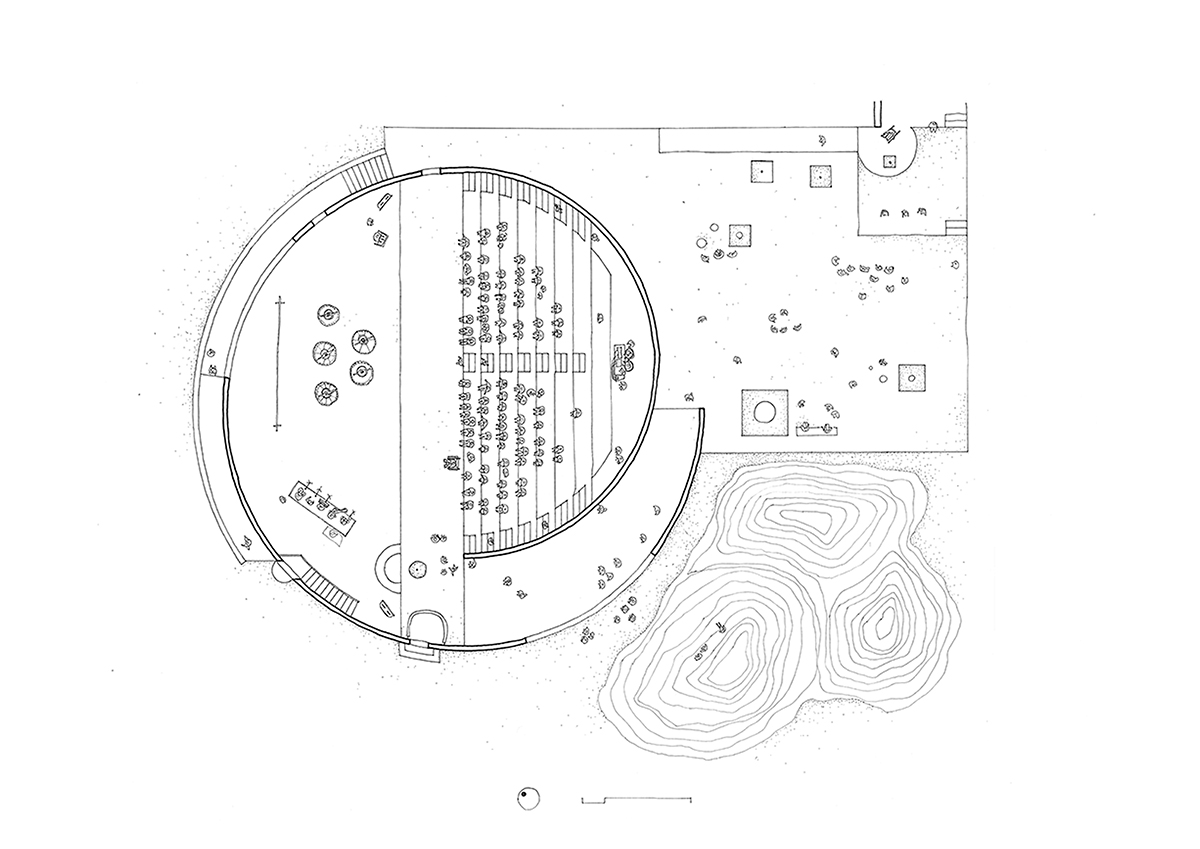 "To maintain the serenity of the place and to not compete with the surrounding buildings, the amphitheater was designed half below ground (1,83 m), the same dimension of the exterior wall height. Because it is buried and located in the lowest level of the site, a tank with the capacity to harvest 70 000 liters of rainwater was designed below the stage. The water collected during the monsoon will be used to irrigate the many indigenous trees that were planted in the area that surrounds the theatre." 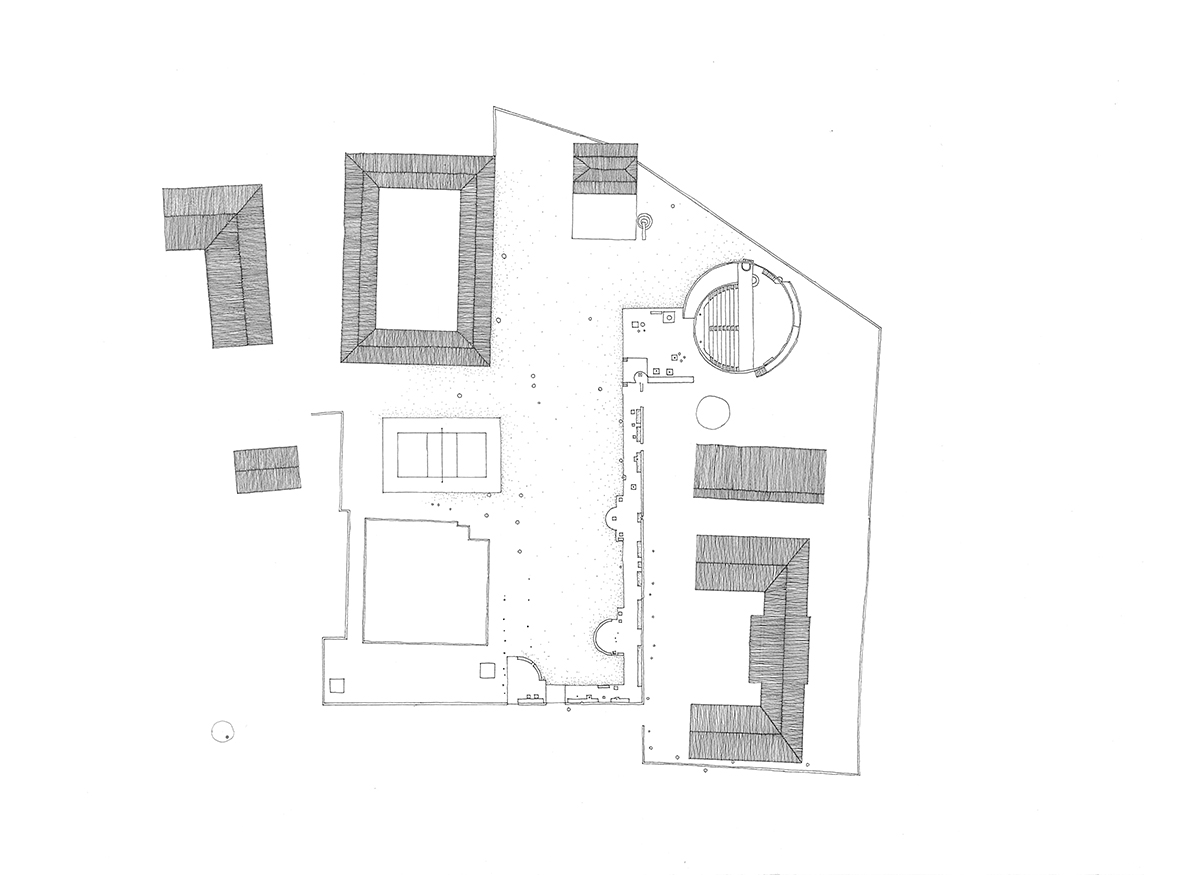 "Jai Jagat theatre was inaugurated on 2nd October 2017 (Gandhiji’s birthday) with a performance about the life of Gandhi, by children from Sabarmati Ashram and the neighboring communities. Three hundred people (the capacity of the amphitheater) enjoyed the show and space. It was a wonderful moment, full of joy. After the show, the children danced and celebrated on the stage. The audience slowly exited the theatre through the ramp and strolled the pathways, gathering on the seating areas, remembering the show, and enjoying this peaceful moment at Sabarmati Ashram." 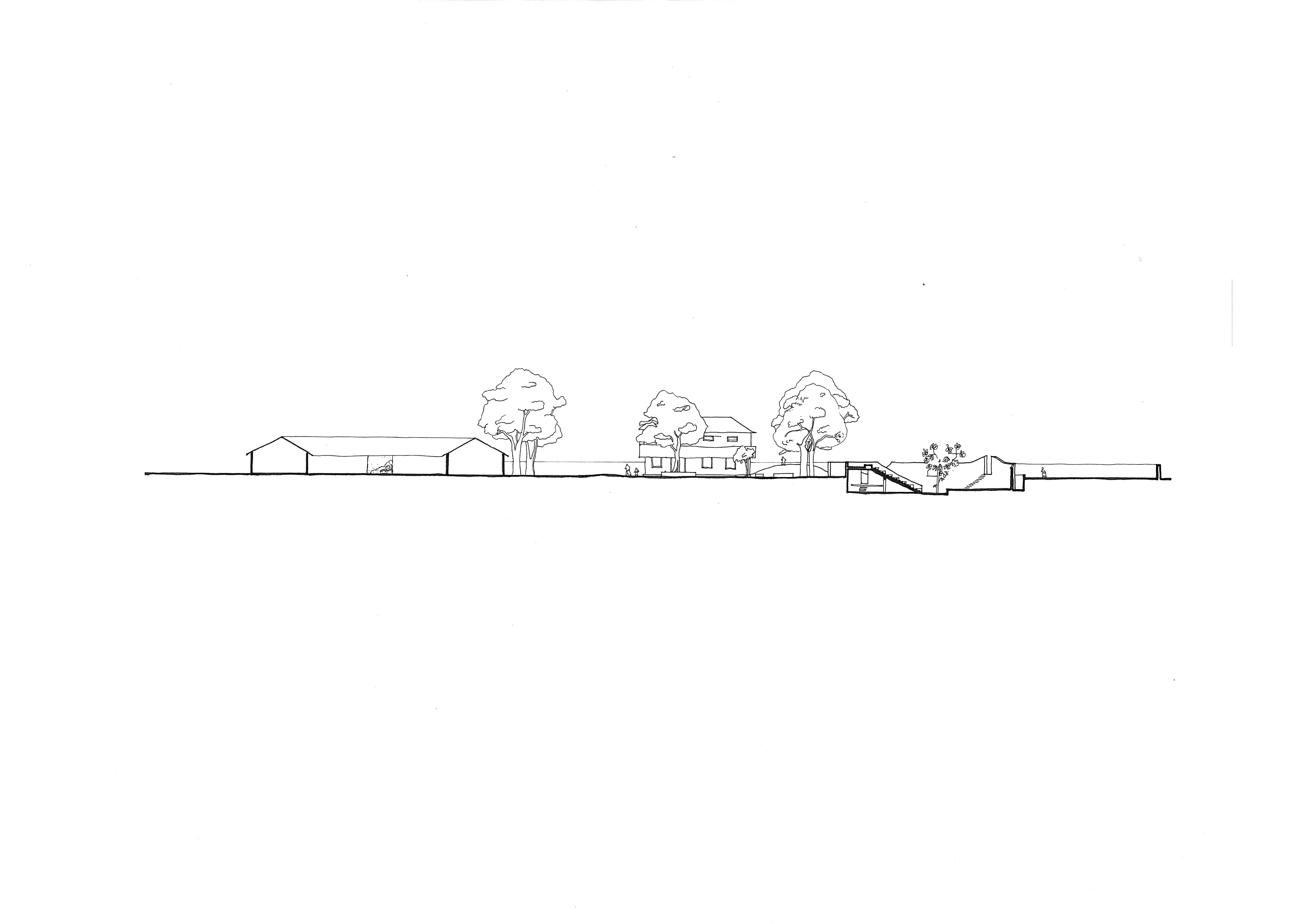 Anand Sonecha graduated from IPSA, Rajkot. After an undergraduate design thesis under Professor BV Doshi, he joined Vastu Shilpa Consultants, Sangath, Ahmedabad. Anand worked on the institutional designs for 4 years, under Ar. Rajeev Kathpalia’s guidance. He travelled to Portugal in 2011, to work with Alvaro Siza where he worked on the Building on the Water project in China. 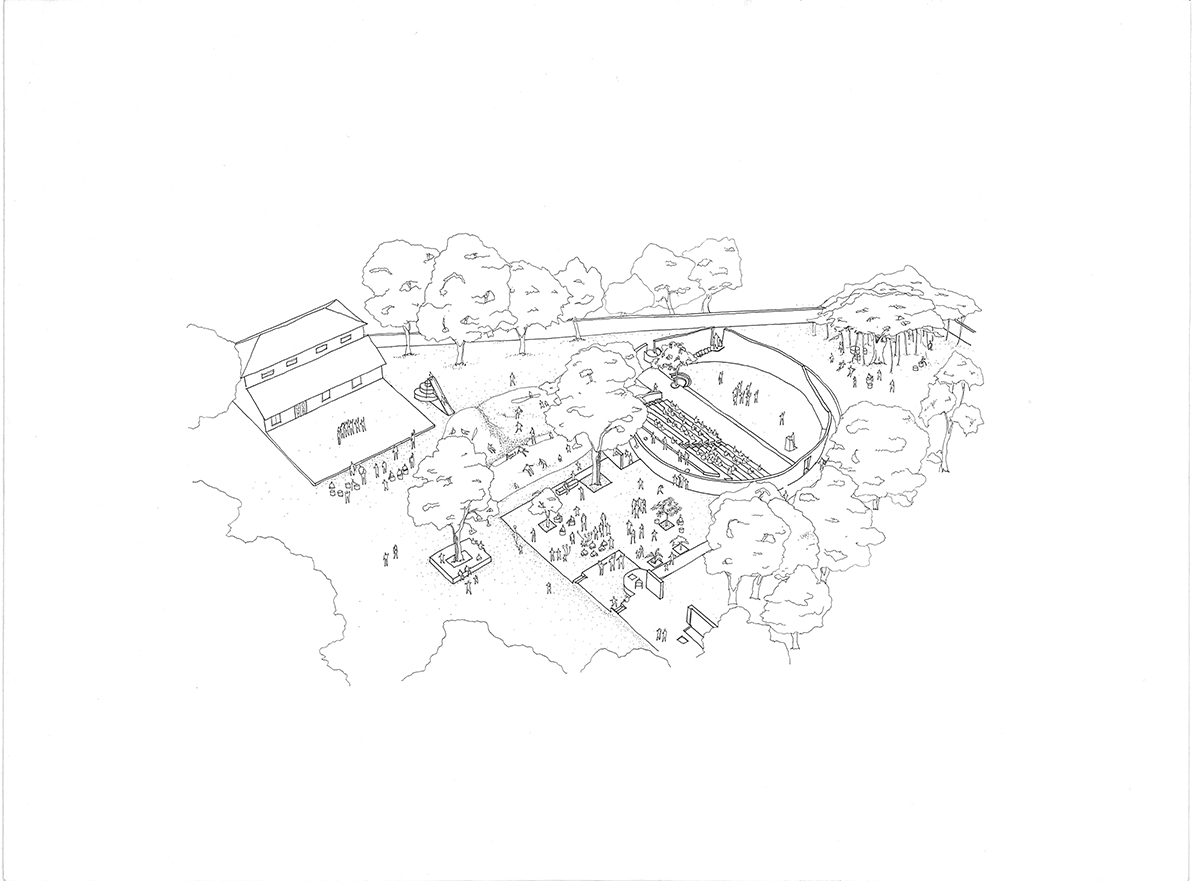 Mariana Paisana co-founder of SEA Lab, studied in Lisbon, Portugal. She joined BV Doshi’s office and met with Anand, while on her Innov Art Scholarship. Currently she is pursuing her graduate studies (MAUD) with Fulbright and Aga Khan Scholarships at Harvard GSD. 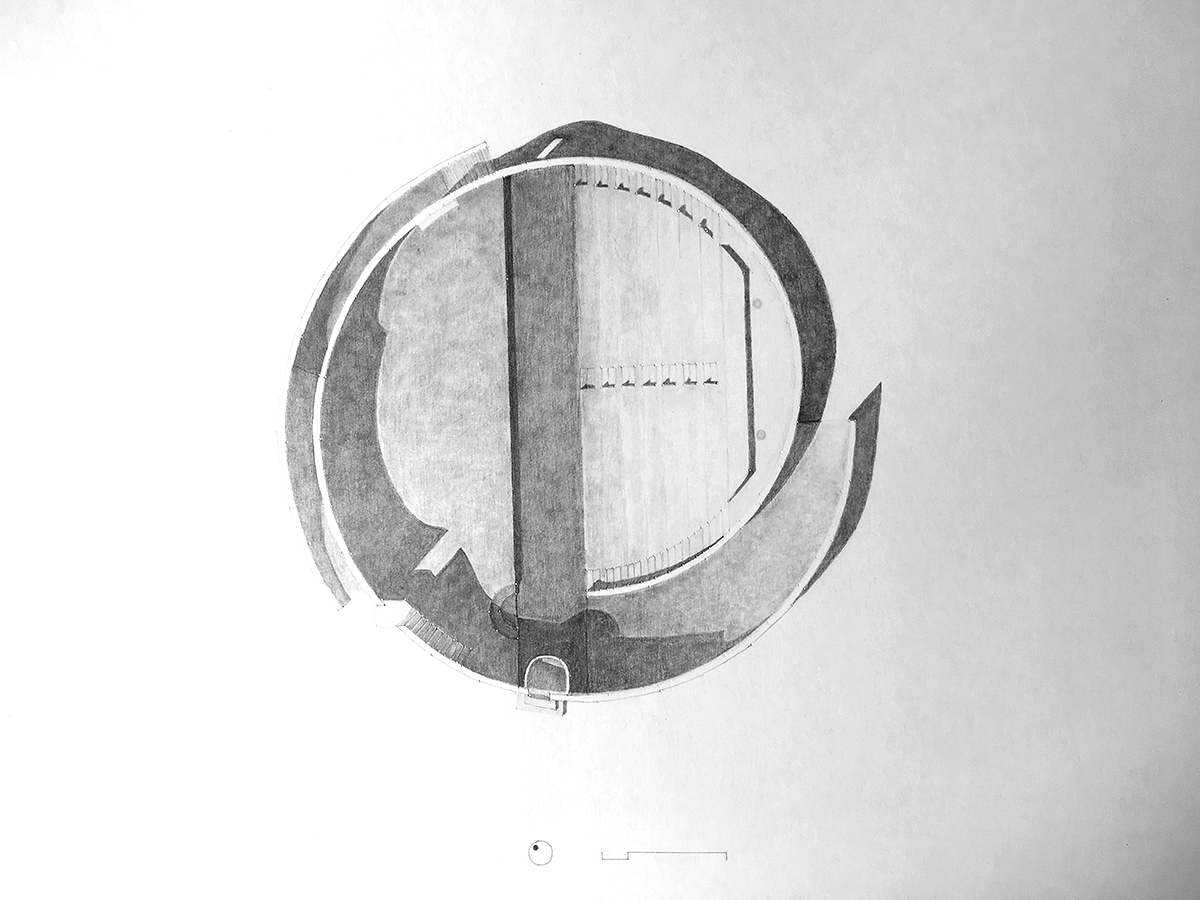 After returning to Ahmedabad from Portugal, Anand and Mariana formed SEA Lab to build a platform for their thoughts and common interests. To explore ideas and experiment, SEA Lab found 'Forum', a bi weekly dialogue and exhibition connected friends and different other practices. They also hold 'Makerspace' for students try their hands at making tools.

"SEA Lab is a process; we are exploring our interests and molding SEAlab accordingly," says SEA Lab. 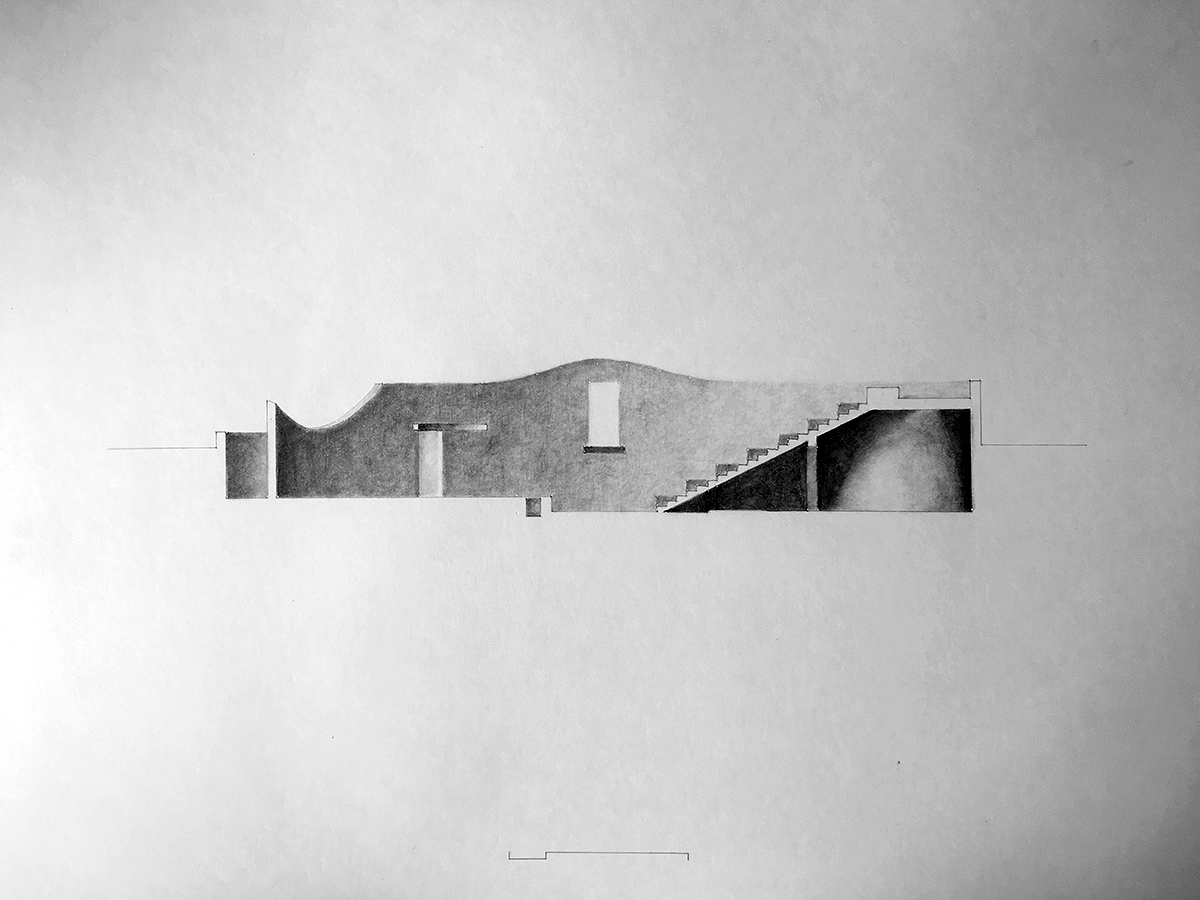 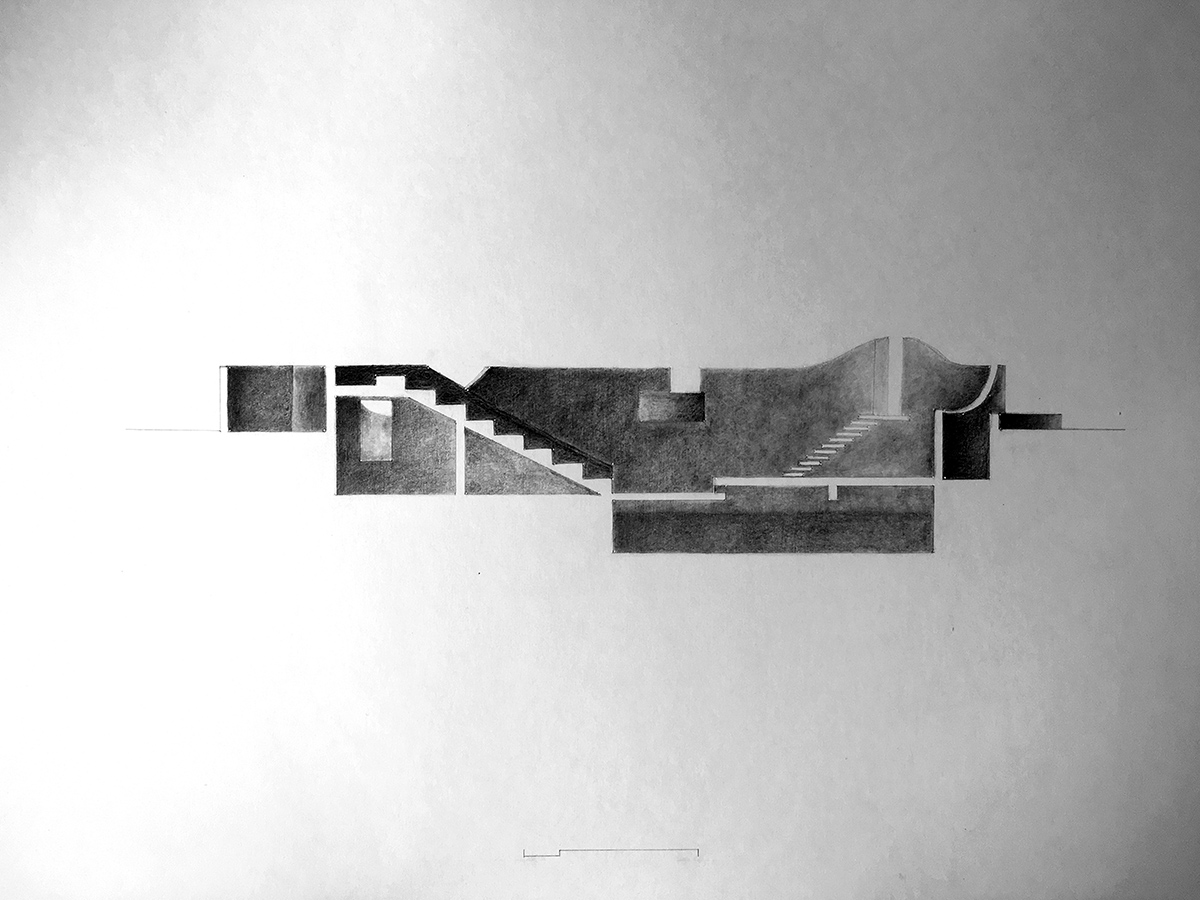 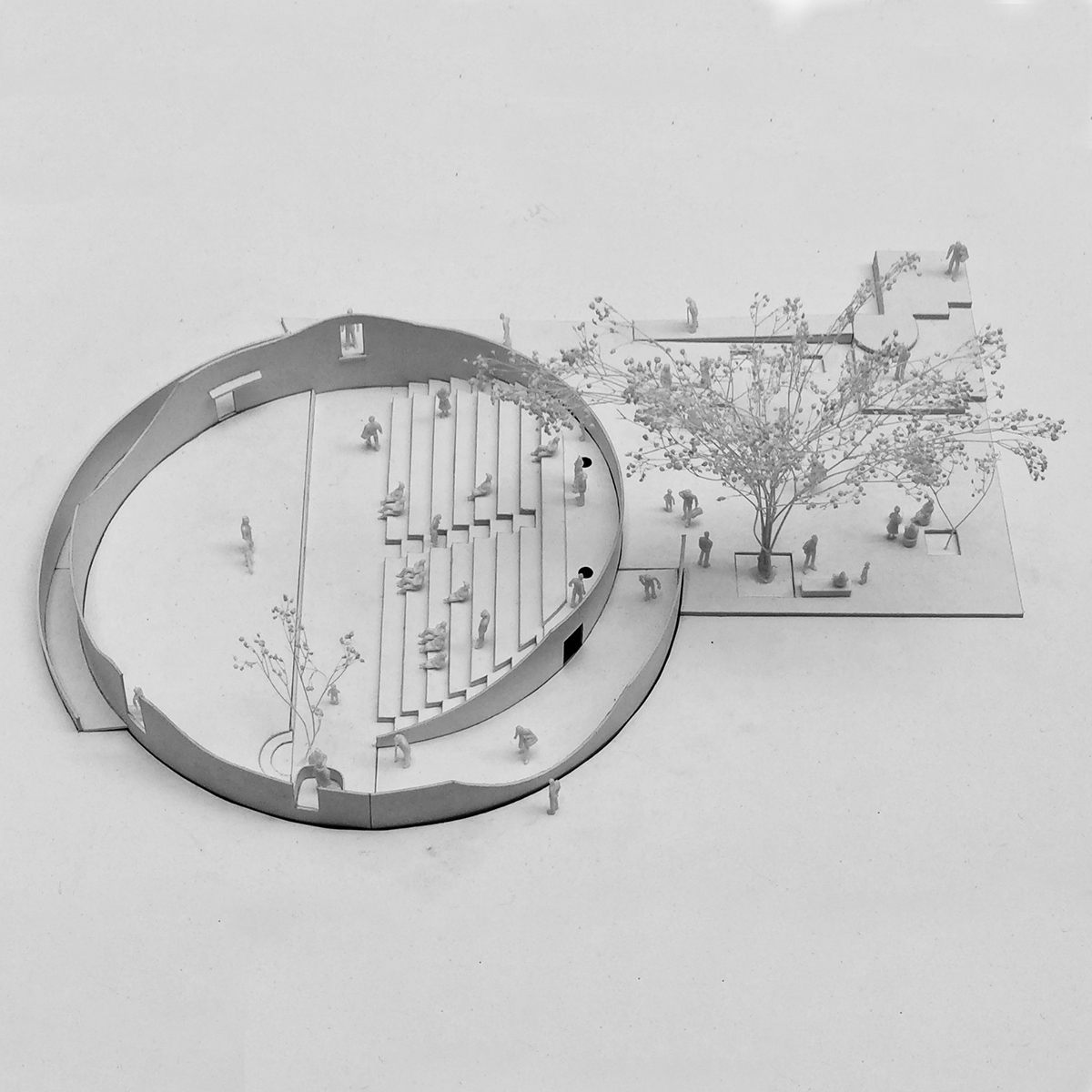 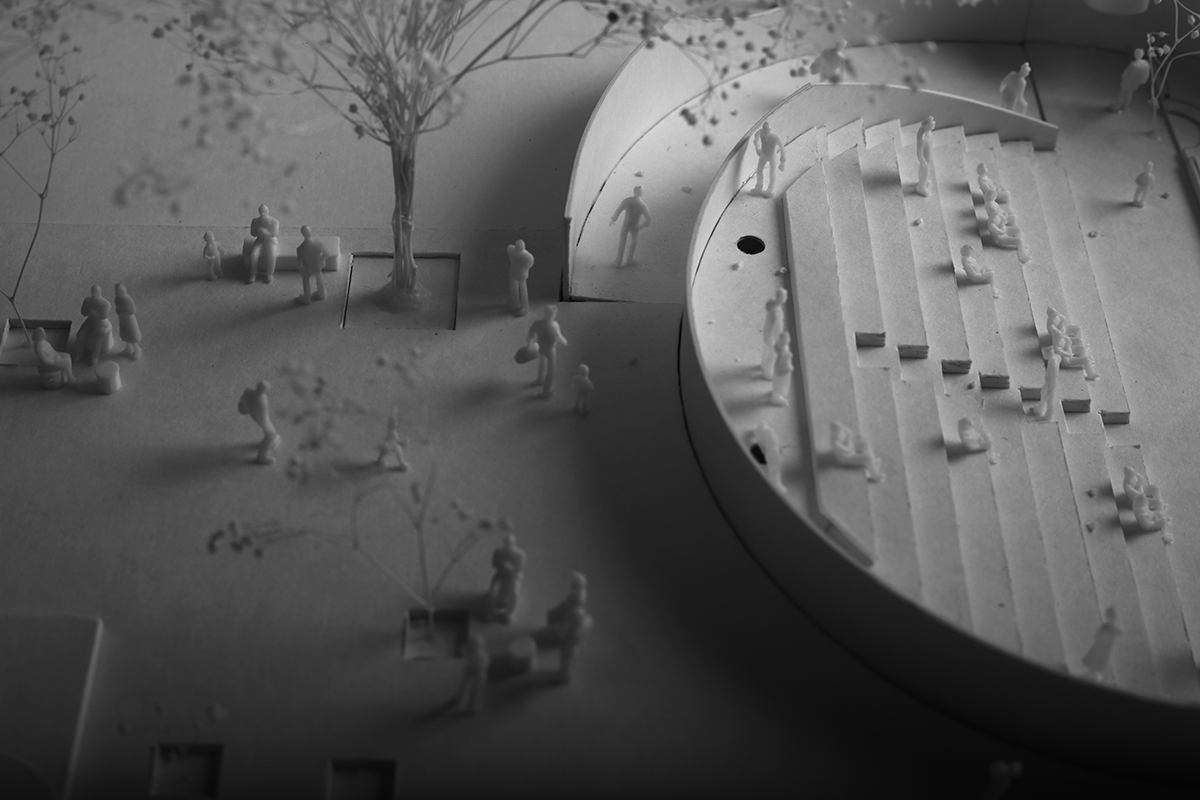 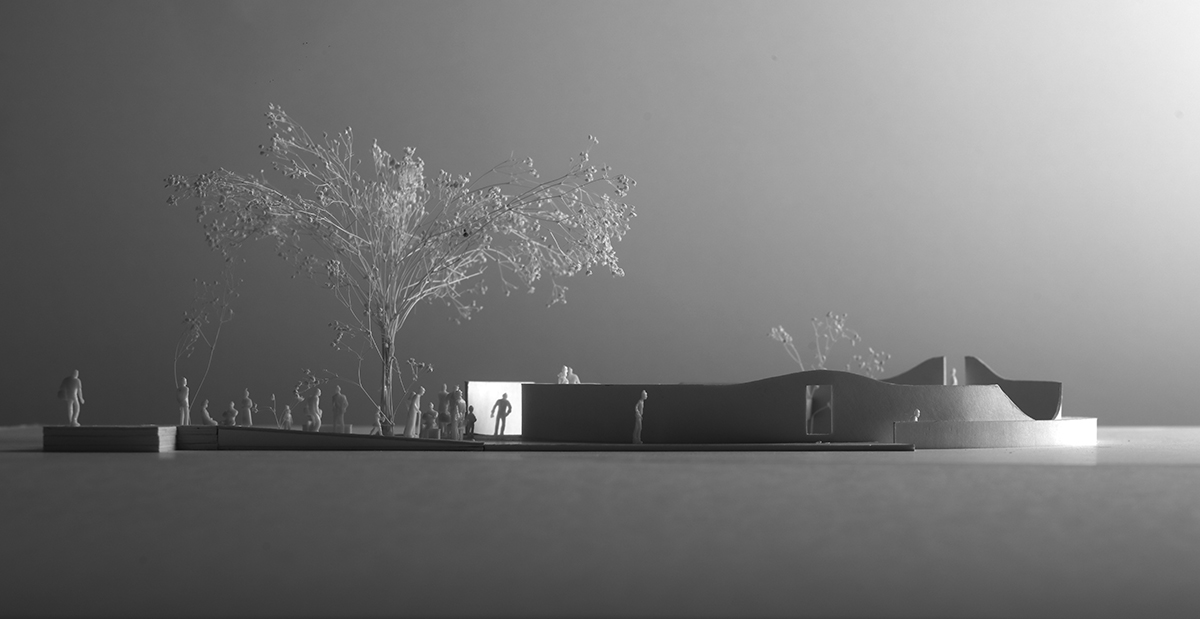 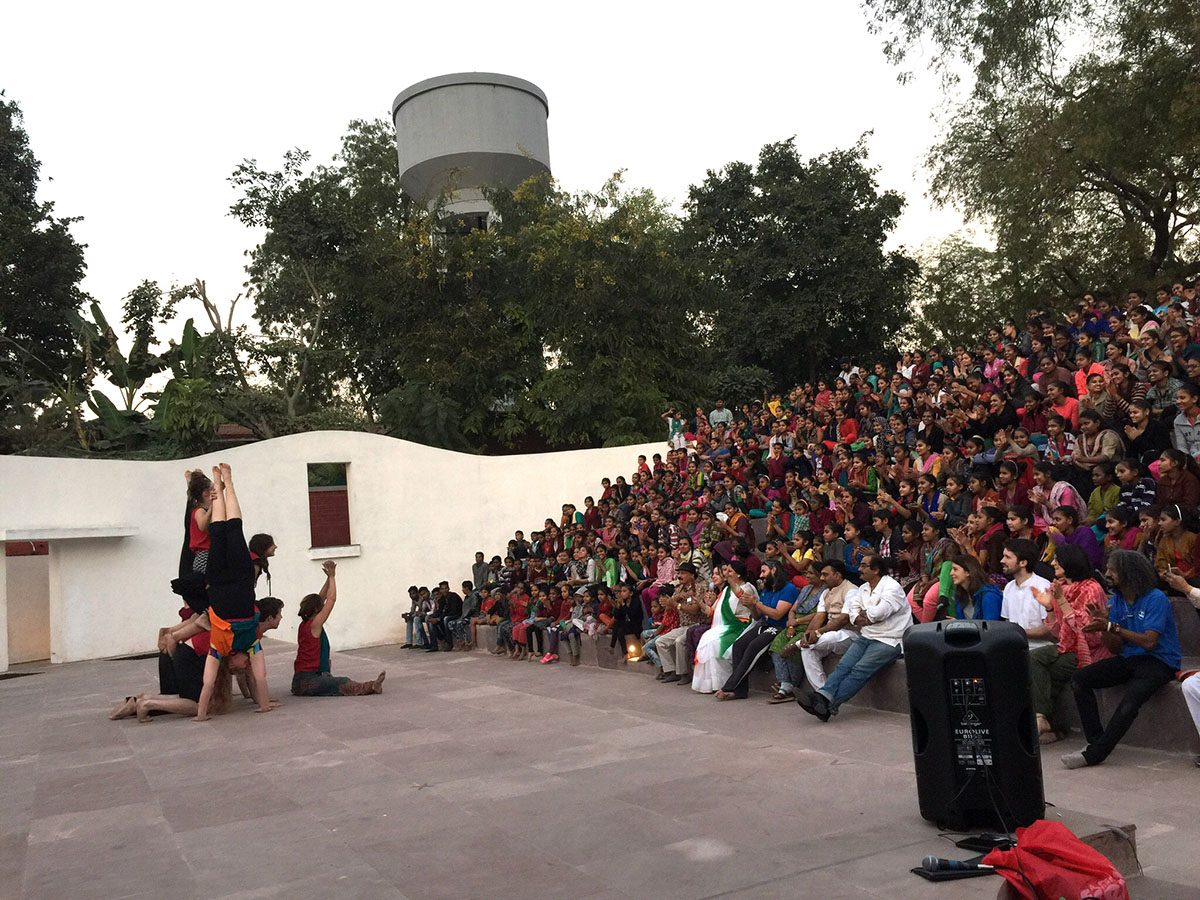