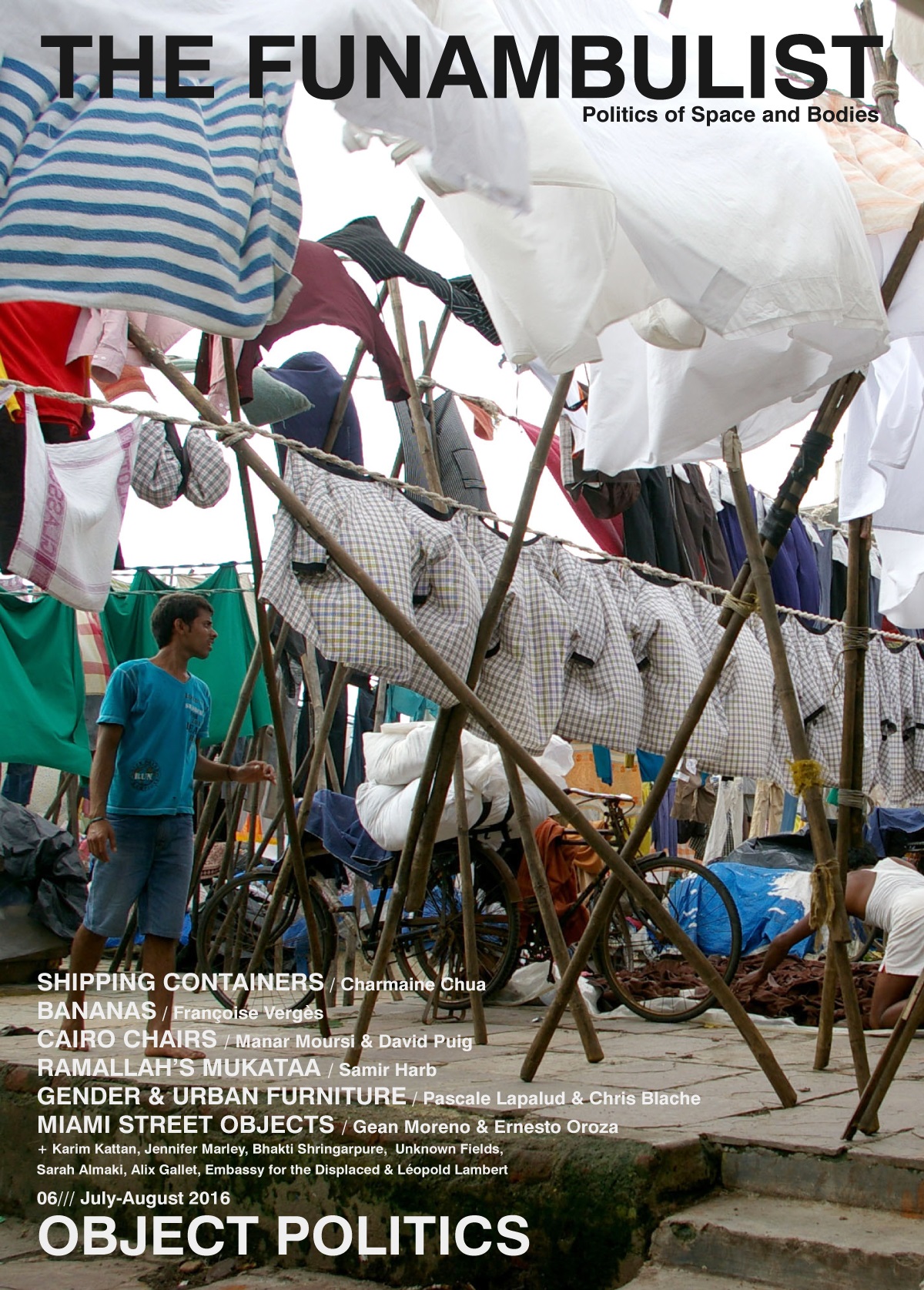 The sixth issue of The Funambulist Magazine (July-August 2016), dedicated to Object Politics is now officially published. This new issue concludes the first year of existence of the magazine and you will continue to do so during the second year. Similarly to the third issue (January-February 2016), dedicated to “Clothing Politics,” this new issue is dedicated to a scale of design that, sometimes, goes unnoticed in the examination of its political dimension: the scale of objects.

Our bodies are surrounded by them, wear them, use them, and eat them. They are all precisely designed, and are involved in complex manufacturing systems, yet we often fail to address the political intensity of our interaction with them.

The issue includes guest columns about Native resistance in New Mexico by Jennifer Marley, and about the most recent Palestinian Festival of Literature by Bhakti Shringarpure. The articles of the main dossier are written by Charmaine Chuaabout the shipping container, Françoise Vergès about the banana, Manar Moursi & David Puig about Cairo's street chairs, and Pascale Lapalud & Chris Blache (Genre & Ville) about gender and urban furniture in French cities. It also includes a short graphic essay about Ramallah's Mukataa by Samir Harb and a text about the New Palestinian Museum "without objects" by Karim Kattan. The transcript of a 2014 Archipelago conversation with Miami artists/writers Gean Moreno & Ernesto Orozaexamines the systems in which generic objects take place, while the photographic section is a partial report of the most recent Unknown Fields' expedition in Rajasthan's garment factories. The three student projects invent a passport and a backpack for the refugees in Lesvos (Embassy for the Displaced), a kit of facial prosthetics to "trick biometrics" (Alix Gallet) and a bridge countering the segregating effects of the concrete walls of Baghdad (Sarah Almaki).

The issue was formally presented and launched at the Autonoma Conference in Athens on July 2.

The issue is available for purchase in four different offers:

You can also subscribe to the magazine and thus support The Funambulist in a longer span of time while benefiting to better prices:

You can also catch yourself up with the 5 first issues by using this "make-your-own-3-issue-combo" option!

The Funambulist is a bimestrial printed and digital magazine complemented with a blog and a podcast (Archipelago) edited by Léopold Lambert. Its subtitle, “Politics of Space and Bodies,” expresses it ambition to bridge the world of design (architecture, urbanism, industrial and fashion design) with the world of the humanities (philosophy, anthropology, history, geography, etc.) through critical articles written by long-time collaborators as well as new ones.

Many aspects of The Funambulist’s editorial mediums remain free and in open access (books, blog, and podcast) and readers who enjoy the forms and contents of the platform are invited to consider purchasing or subscribing to the magazine as a form of support for this form of production of knowledge.