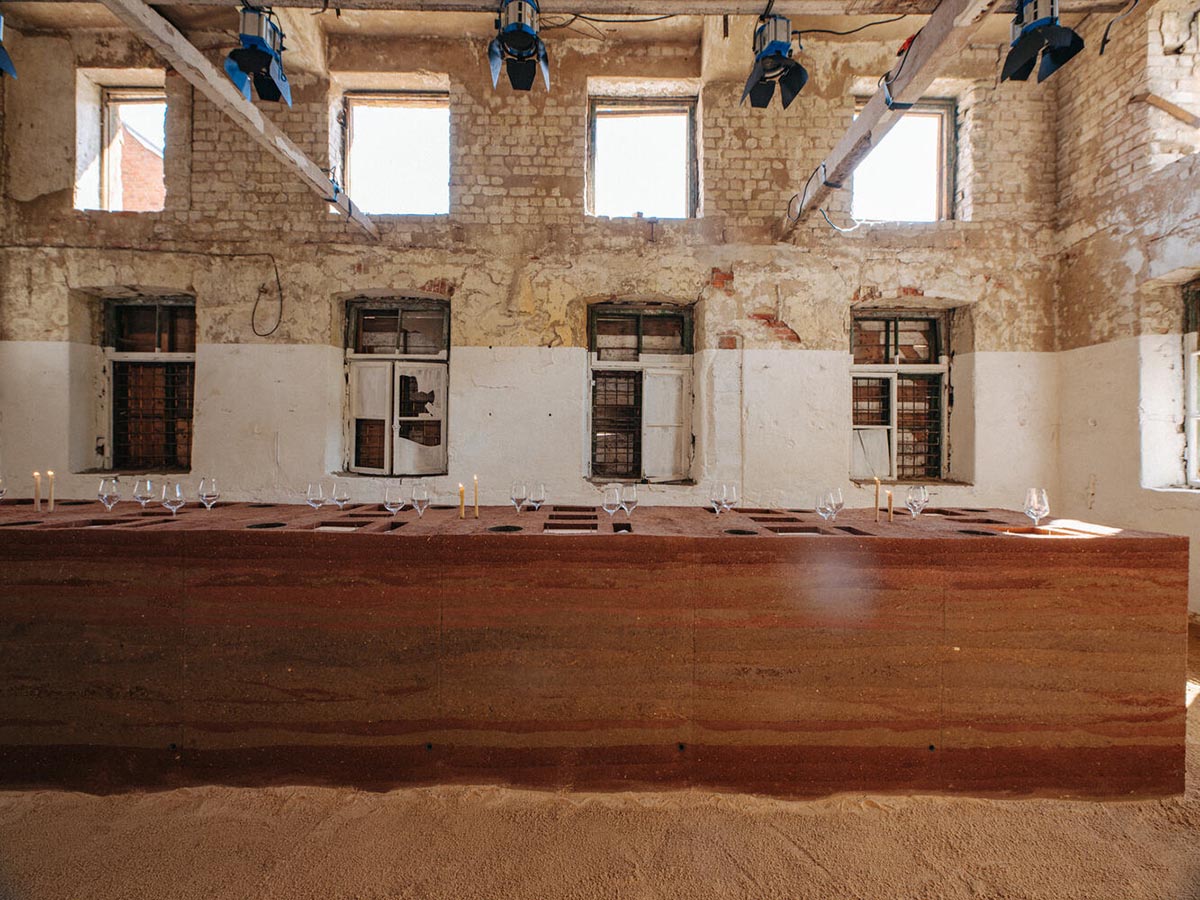 Estonian architecture practice studio Kuidas.works has created a zero-waste temporary restaurant with earthy elements and a 15-ton rammed-earth table in a town of Viljandi, southern Estonia.

The project, called Restaurant 0, was created for a TV show, exploring different ways of how design can and should be used as a tool to draw attention to the footprint of the design and building industry.

The restaurant is situated within the ruins of a 19th-century sausage shop in the Old Town of Viljandi and uses the existing walls with a flexible layout, a sand-covered floor, focusing on a 15-ton rammed-earth table for guests. 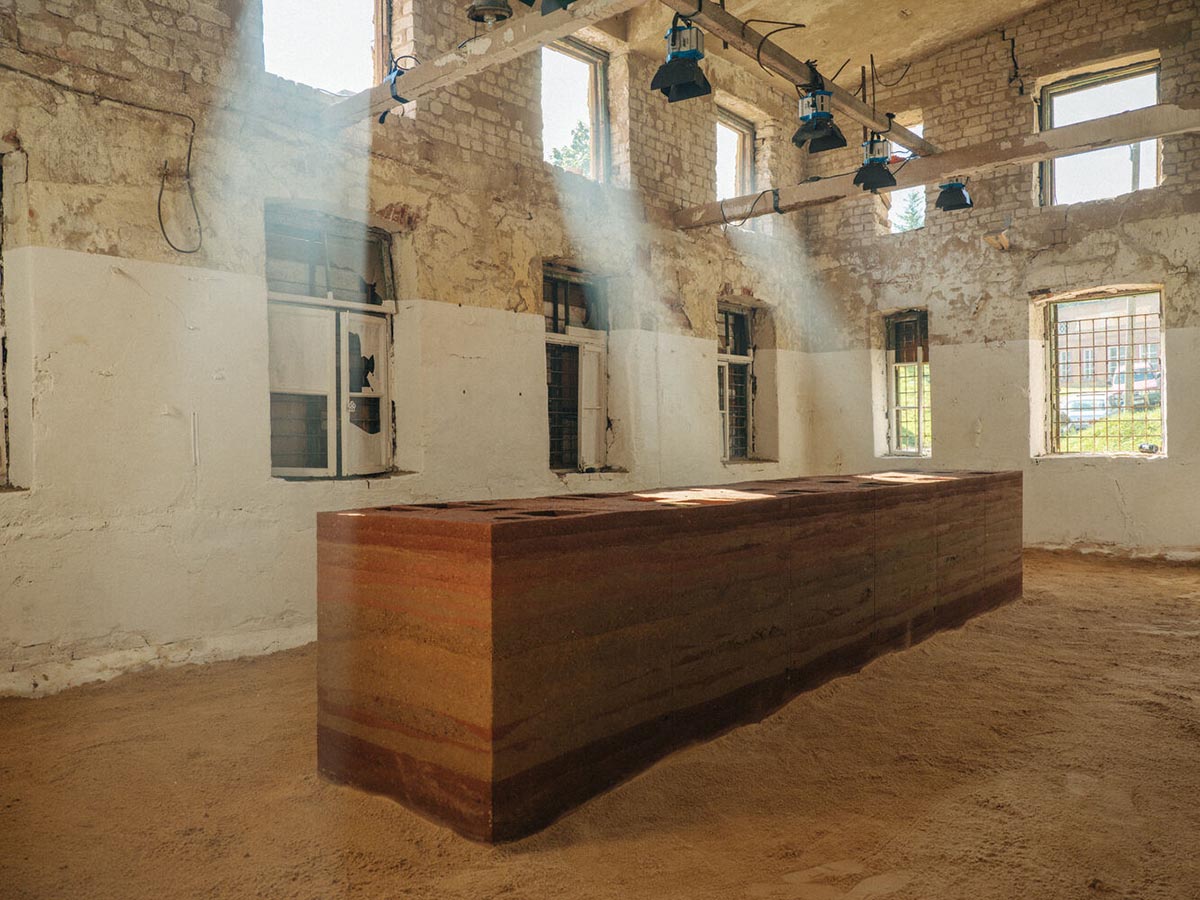 In the summer season, the slow-tech spatial design studio kuidas.works* (kuidas? means – how? in Estonian) was invited to participate in an Estonian TV series Restaurant 0. The series aimed to deliver a rather challenging task: "building a restaurant in 7 days at zero cost, using smart recycling." 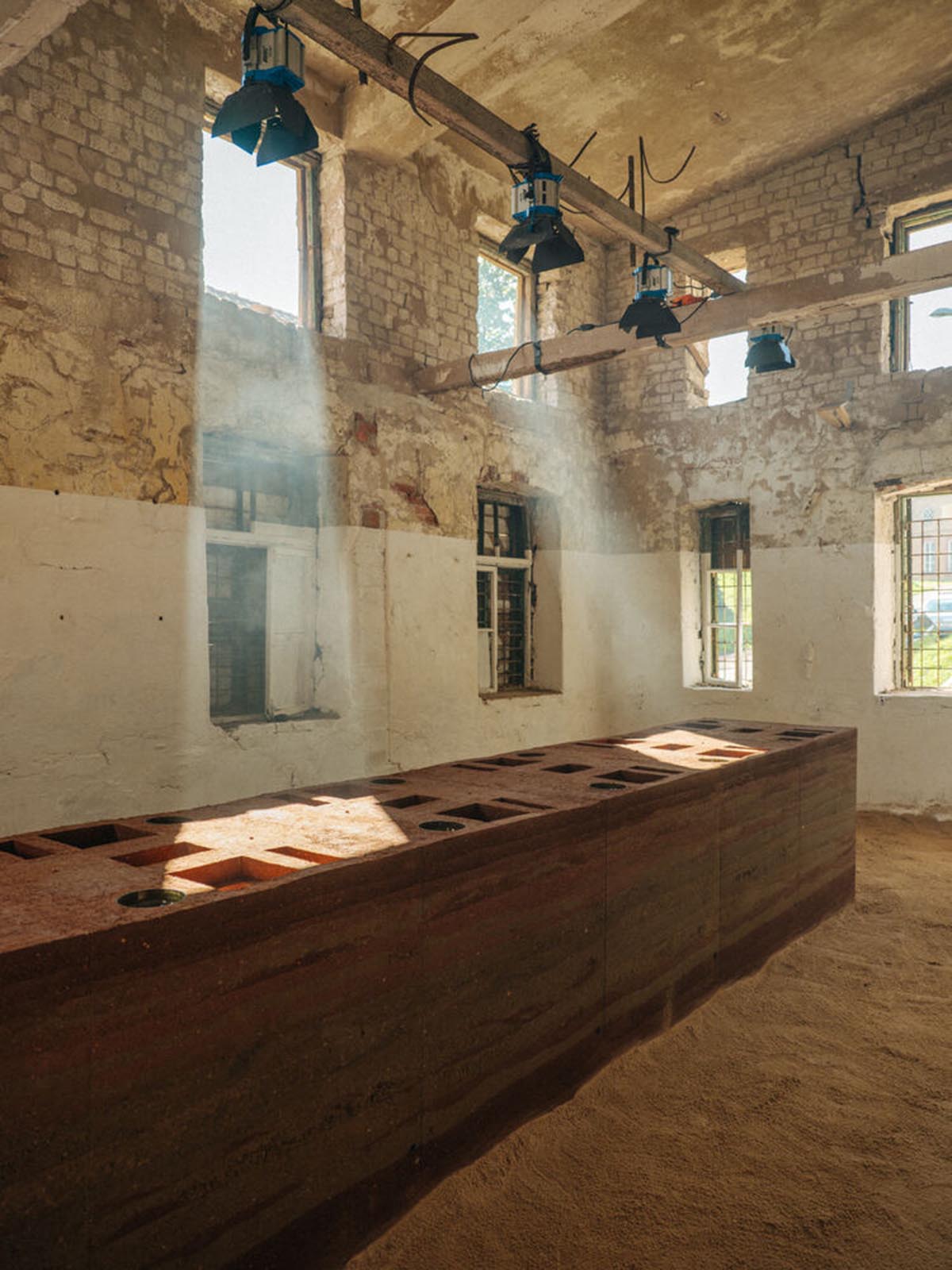 With this project, this studio generously handed the opportunity to explore the full range of design possibilities of creating a restaurant experience from scratch with zero budget and without leaving a remarkable footprint. 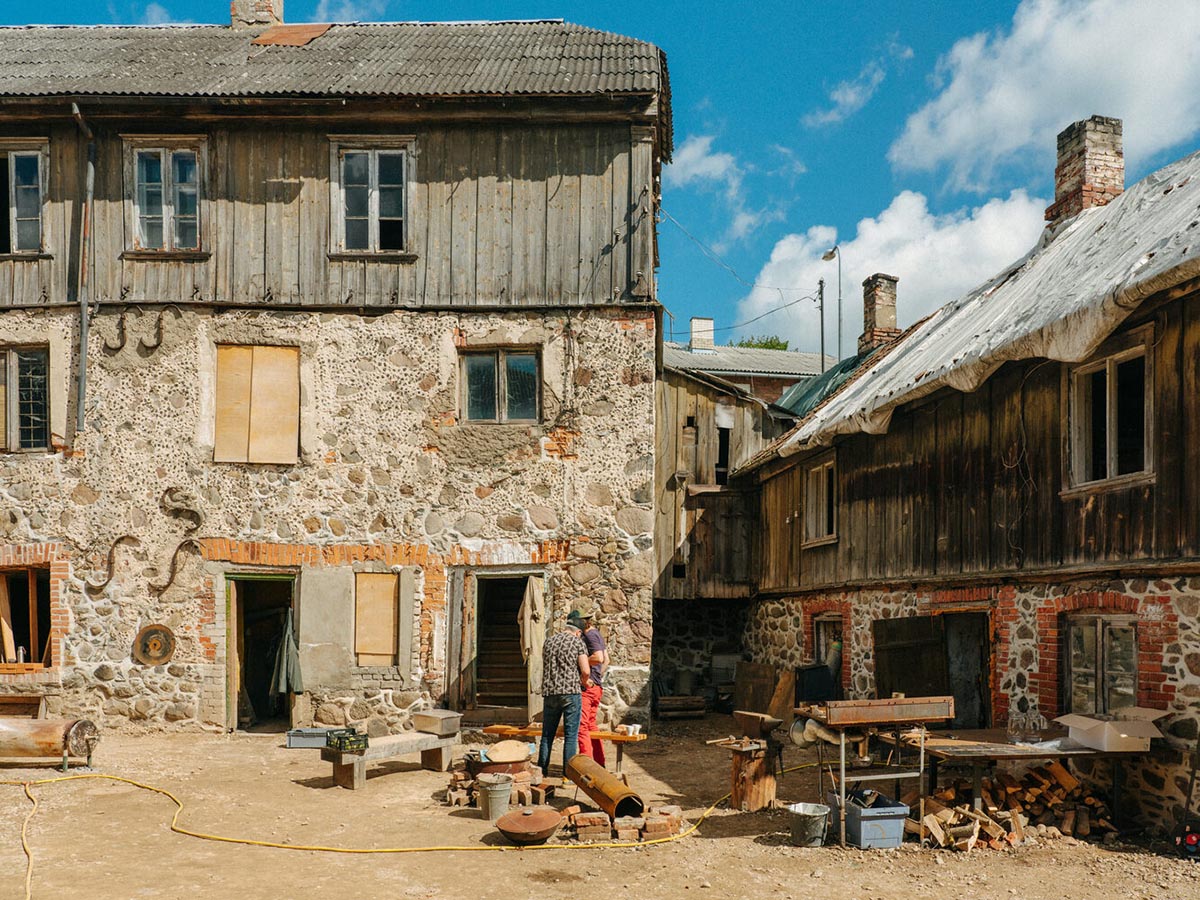 "In that case, naturally, the question "how?" arises," said studio Kuidas.works.

"By recycling the waste, we can reduce the footprint of fast consumption. However, even when materials are reused, the result can still end up in landfills or incineration."

"The recycling process itself can also turn out quite costly or unresourceful," the studio added. 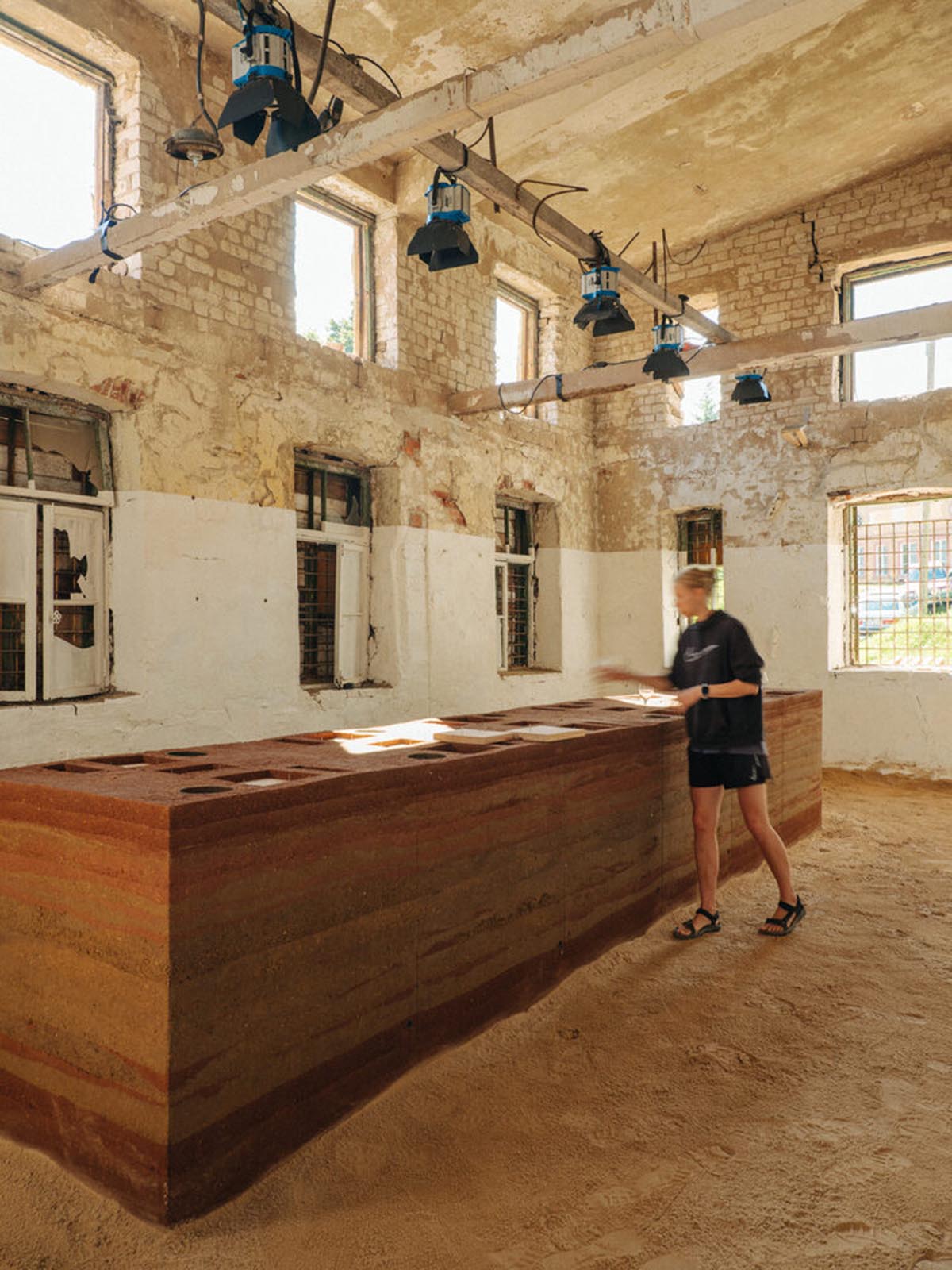 Based on this approach, the design team decided to a zero-expense paradigm in the TV show by proposing a conceptual centerpiece for the restaurant by using a 15-ton rammed-earth table.

The design of the table has a simple form that uses ancient methods, it was made of using the rammed earth technique, and created only using hand-made techniques and natural materials. "Tons and tons of clay were first dried in the sun, then sieved through an old spring mattress frame, carried bucket by bucket into the framework, and finally rammed into a standing height dining table," added the design team.

"The earth was mainly of local origin and sourced from a nearby clay quarry. Typical of the Devon era, Southern Estonian earth fluctuates in yellow and ochre undertones." 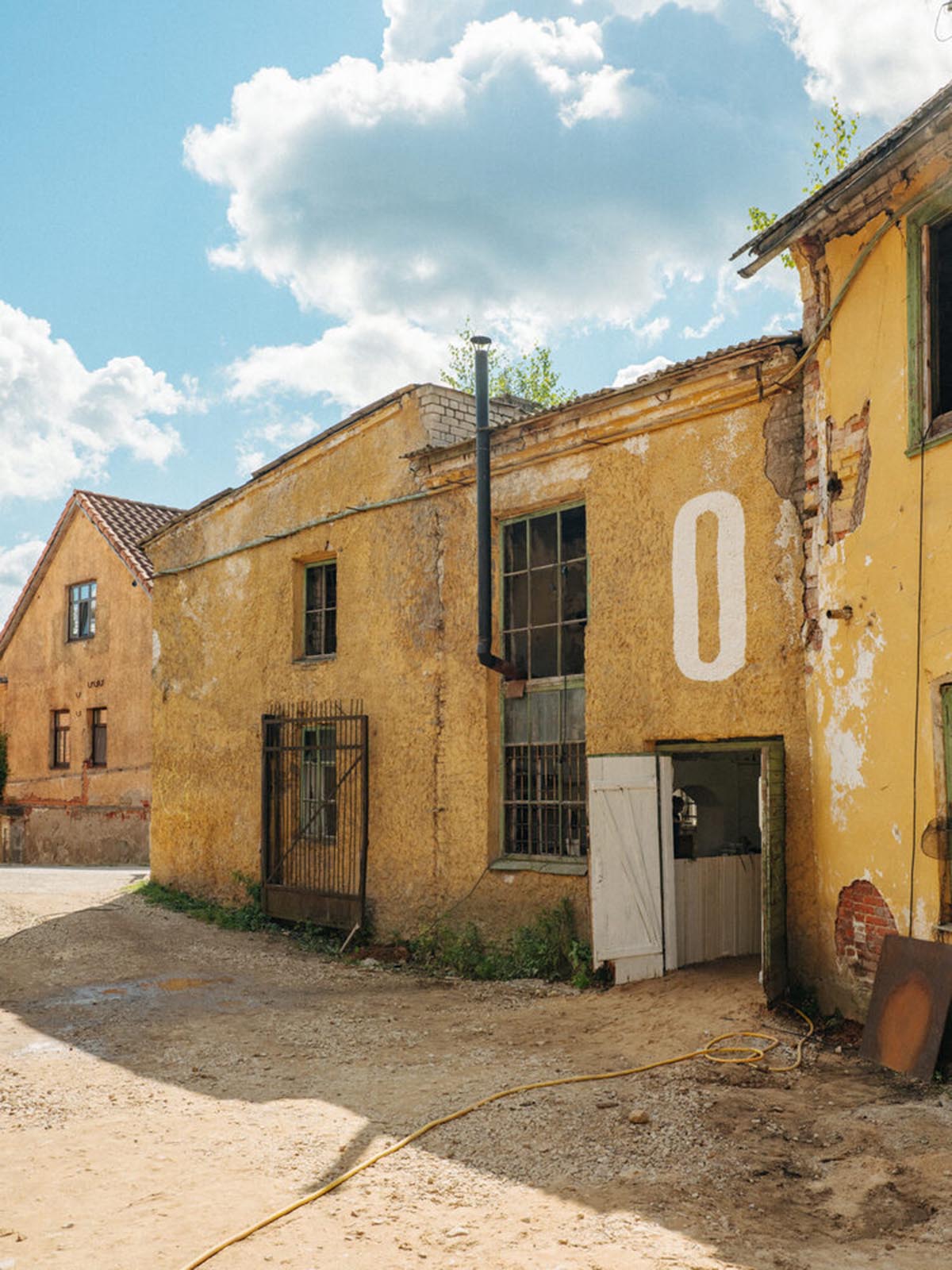 The darker red clay was also sourced from the Lithuania region. Other main materials in the project are sand - to level the floor - and lime paint to neutralize the walls covered in graffiti. 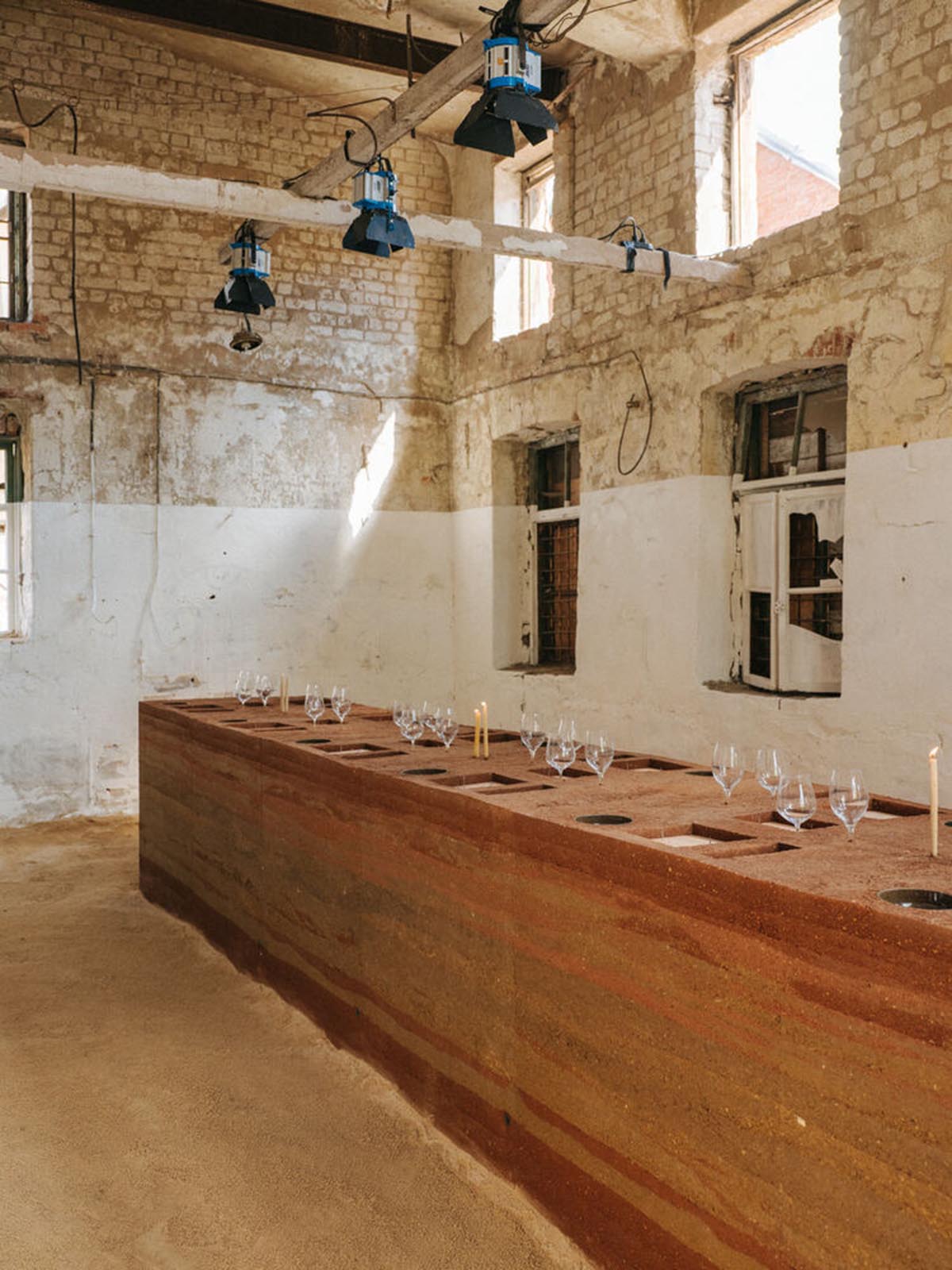 According to the studio, the used volumes of clay and sand could easily be reused, but even if the rammed earth table were left in ruins, the materials used would not burden the environment, and the table will slowly but surely fall apart and disappear.

The team added that "In total, less than 1 per cent of the materials - just the tableware - require recycling later on." 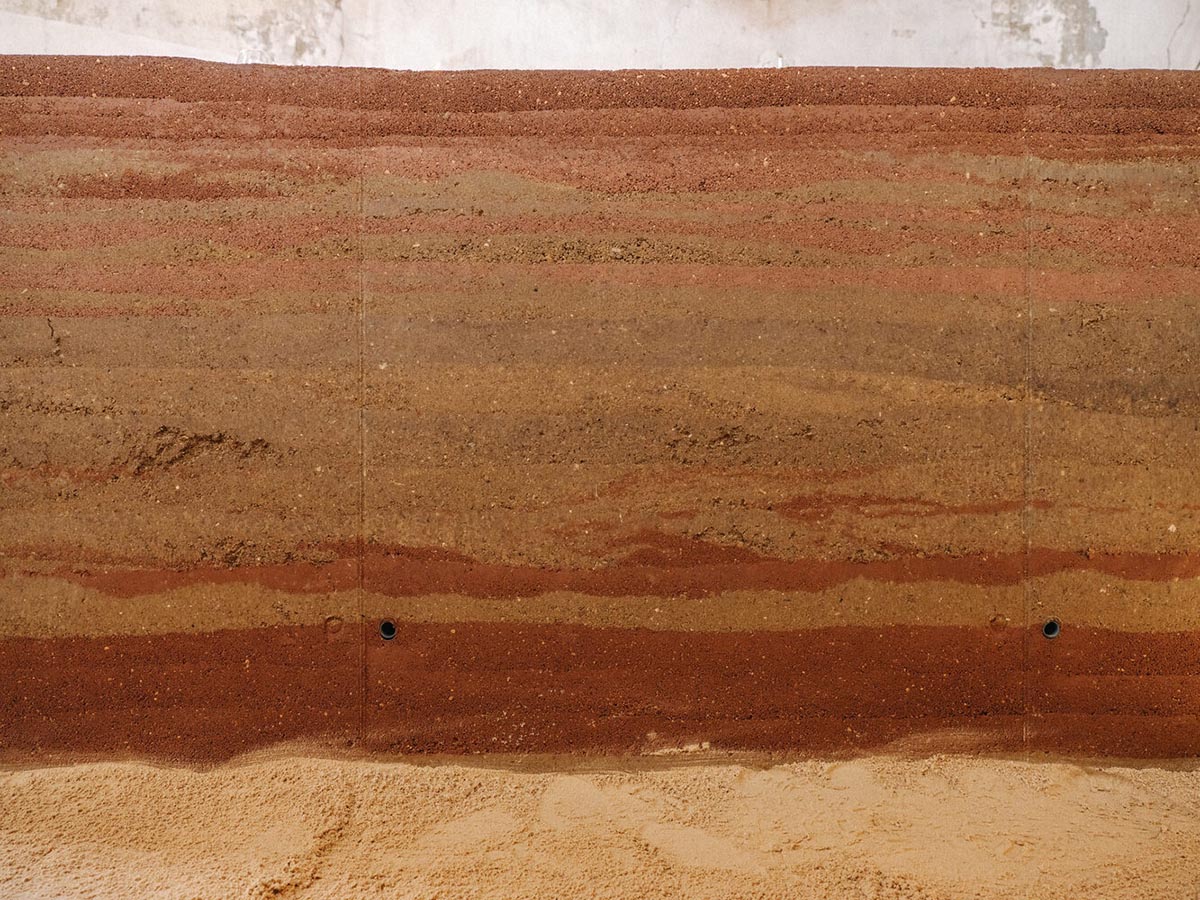 Materials used for the tableware were wooden trays made from old floorboards from the site, bowls cut from 3-liter glass jars, steel plates, and sleeves of copper tubes used as drinking glass stands.

The pop-up restaurant was designed for 12 guests for a one-night-only 4-course dinner. With this rammed-earthy table, the restaurant itself aims to support presence and awareness, "adding attentiveness to the dining experience as it won't let you forget where you are and why." "Coming out of the comfort zone is the prerequisite for understanding ecological problems, which was the undertone of the whole show. The design does not have to be about comfortability," the architects explained.

"It can and should be used as a tool to draw attention, as the design and building industry has one of the heaviest footprints."

"So whether turning to simple technology is convenient or inconvenient, or whether there are other solutions, is the central question of the concept of this work." 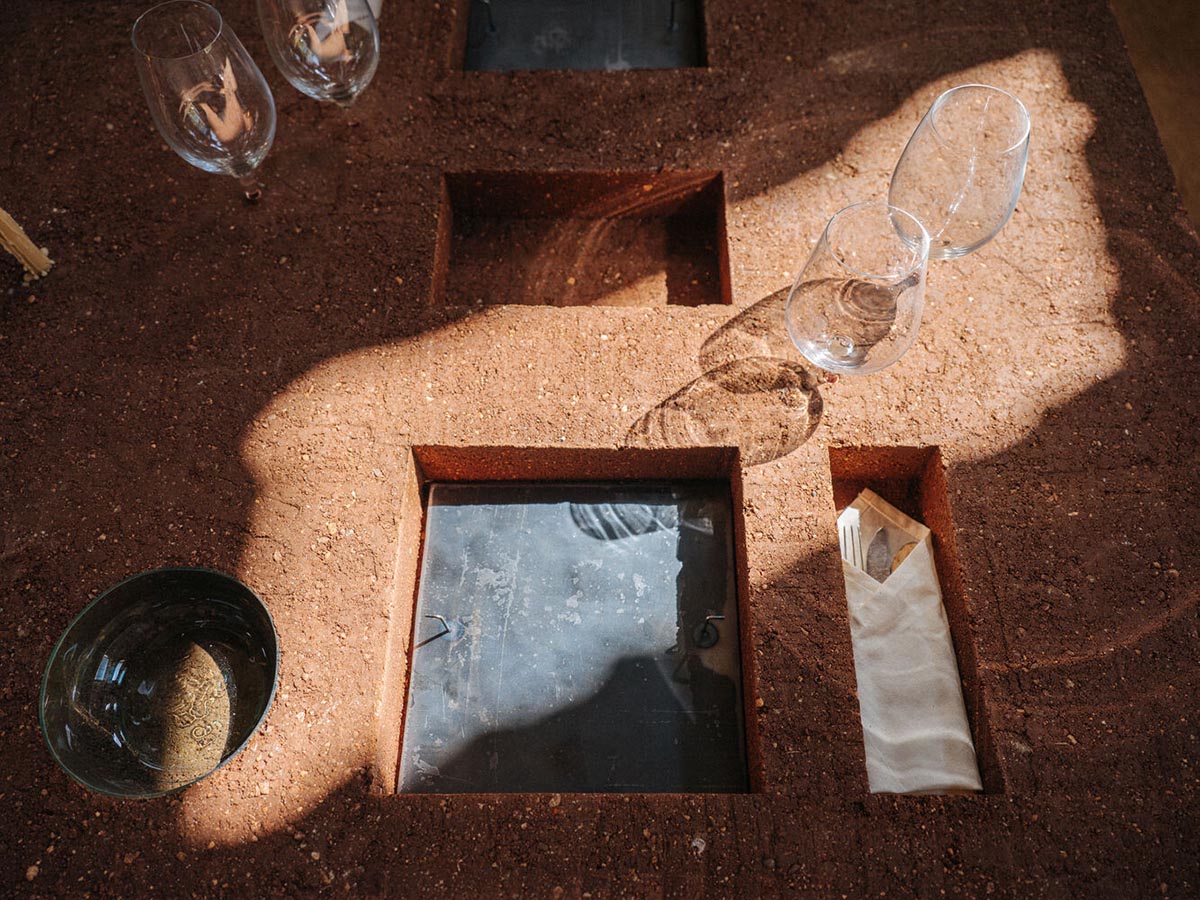 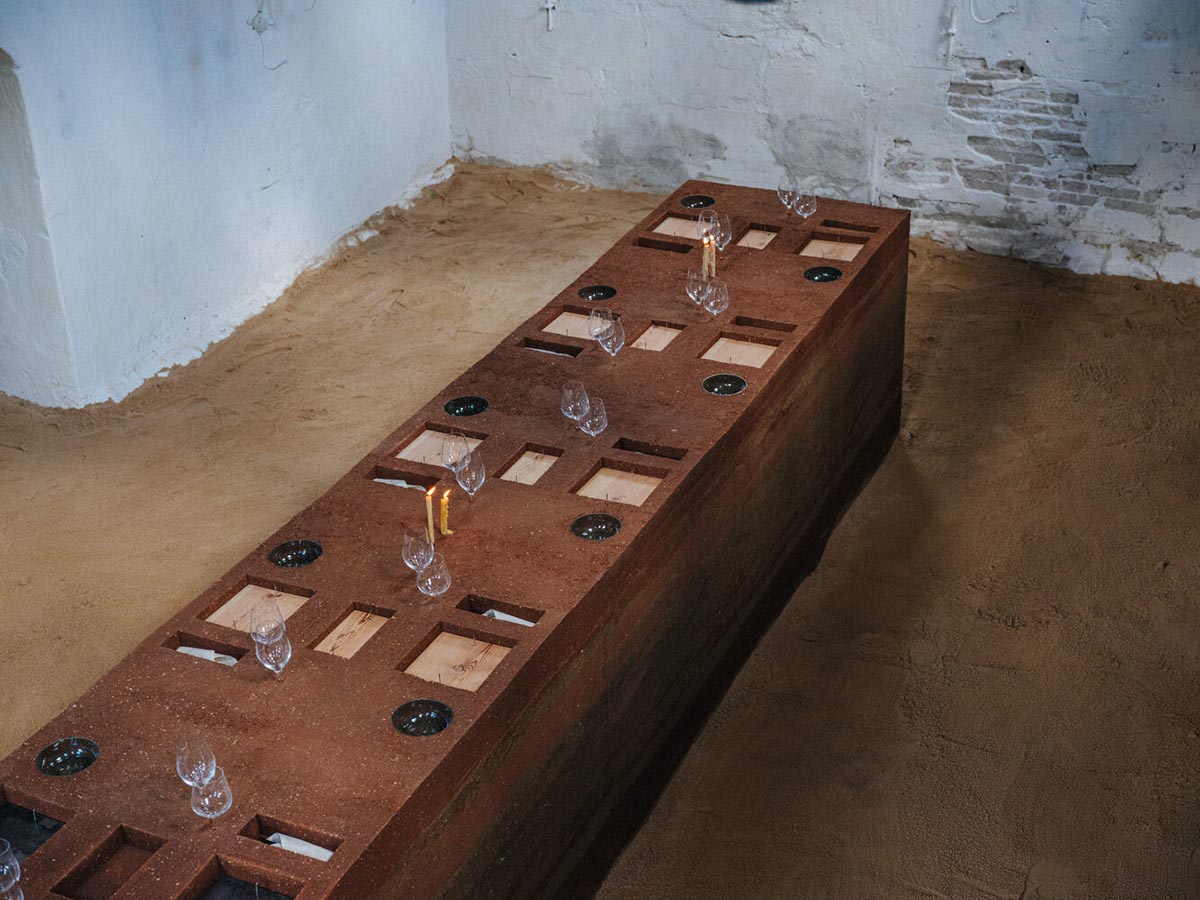 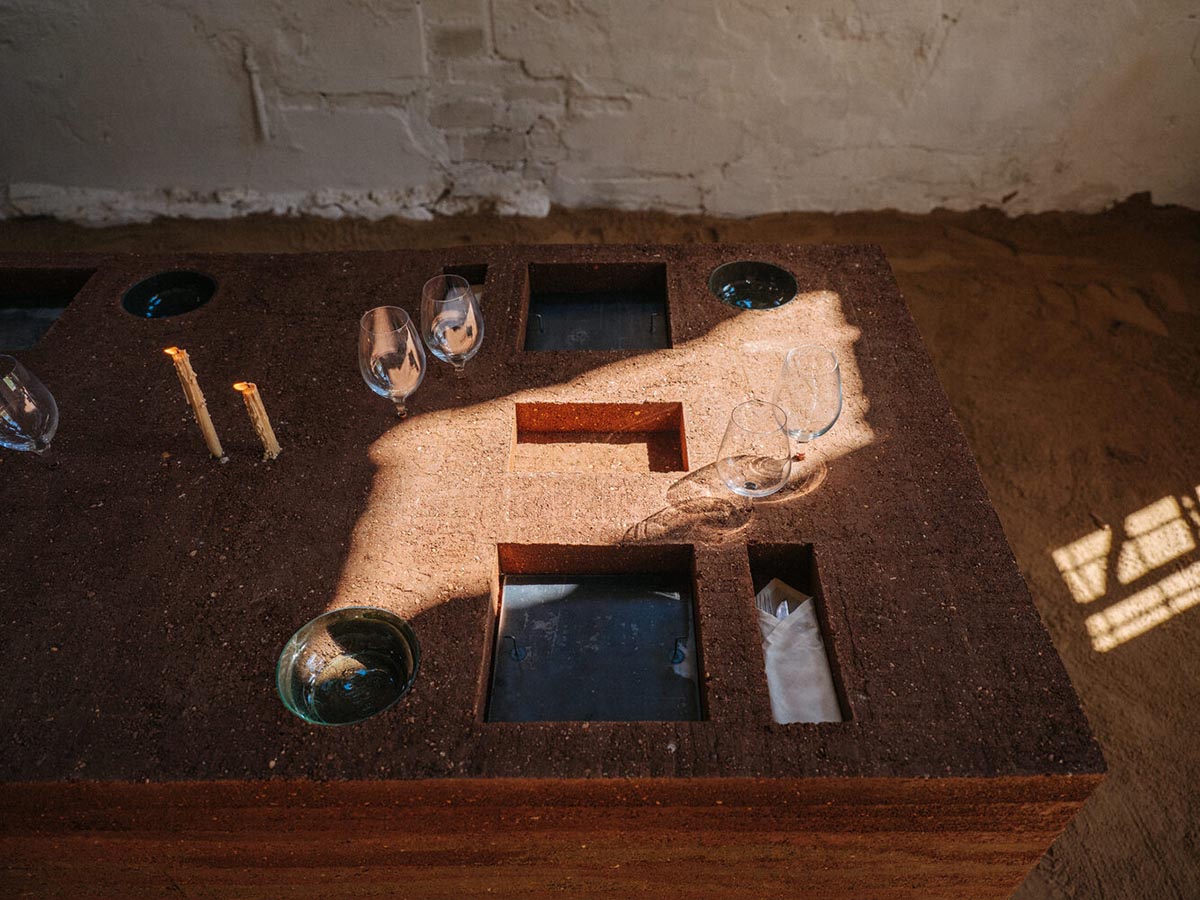 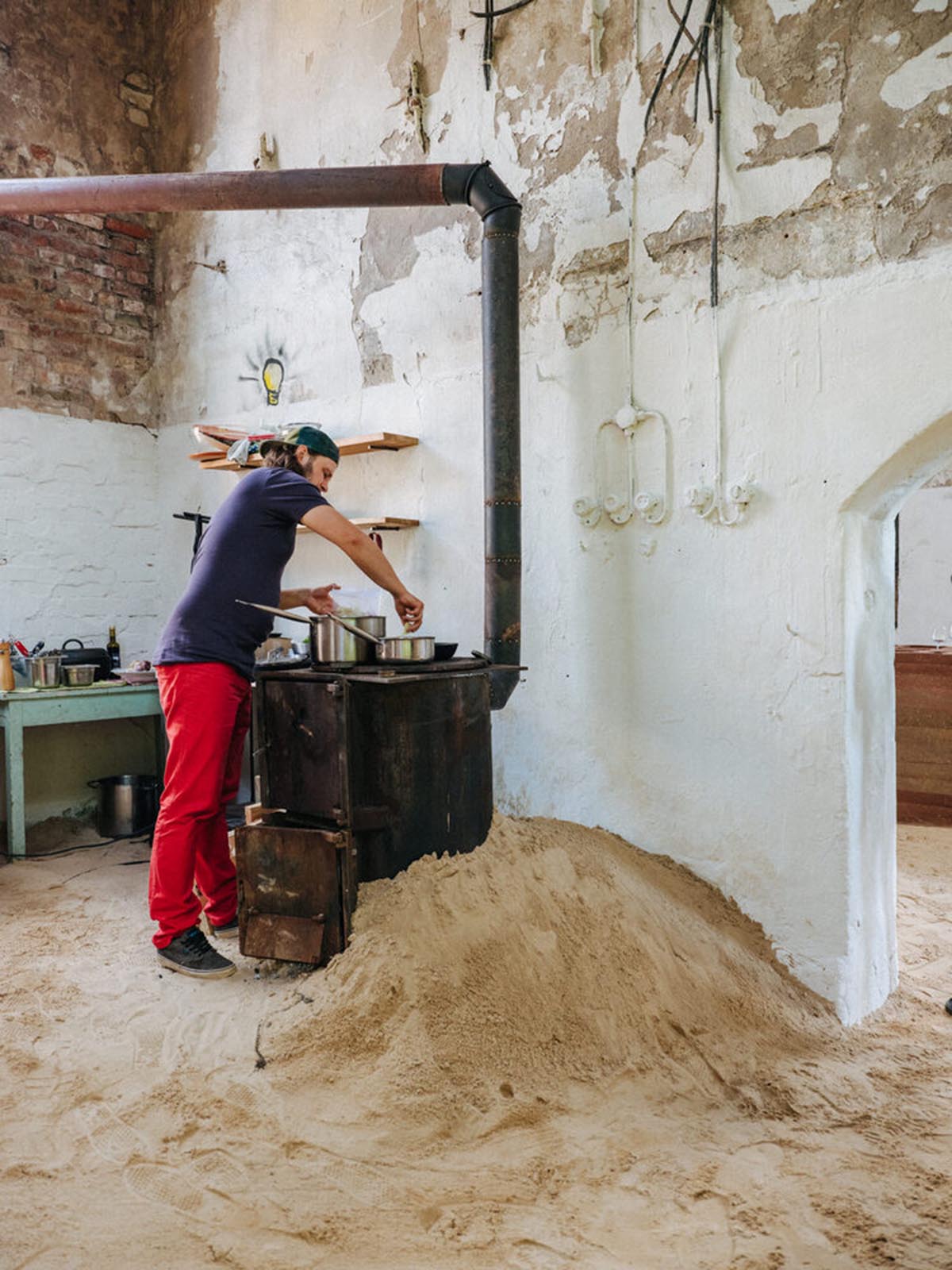 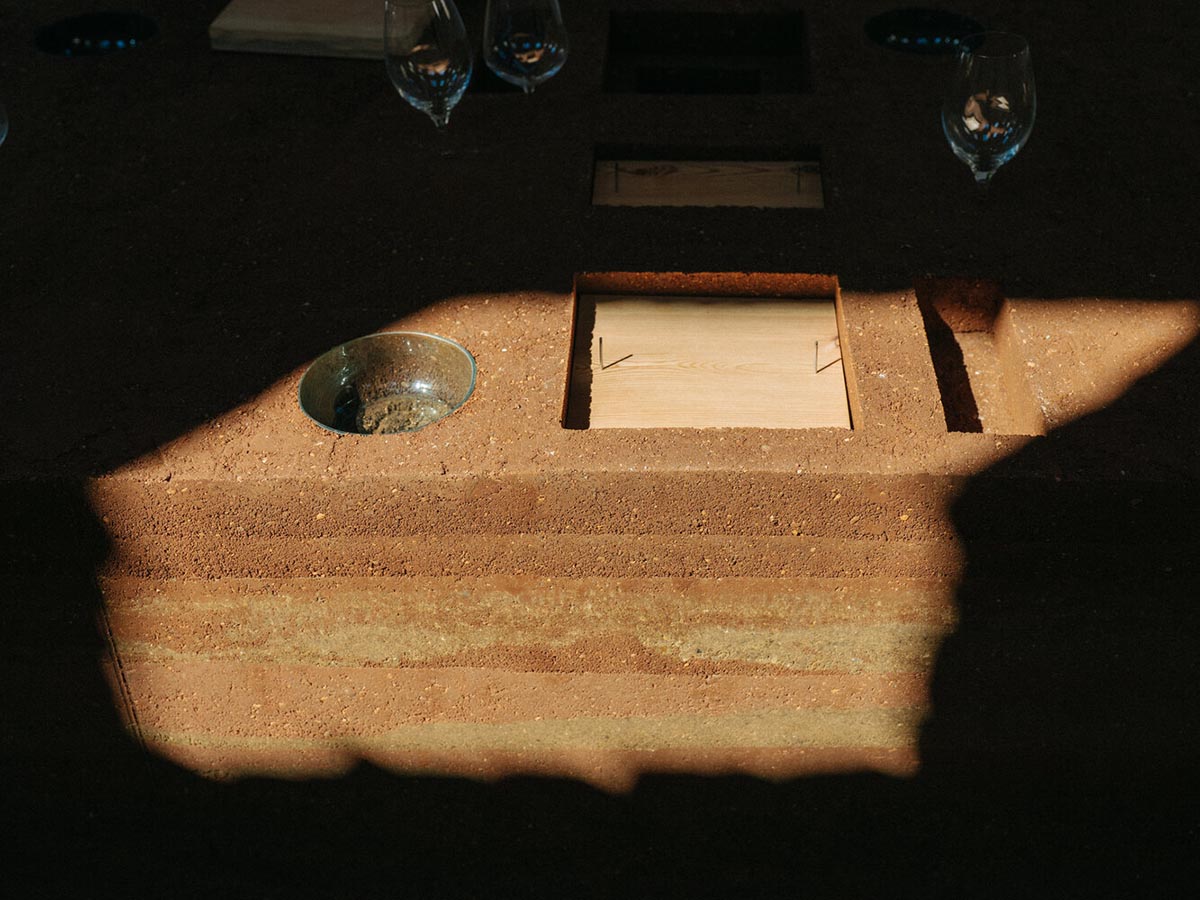 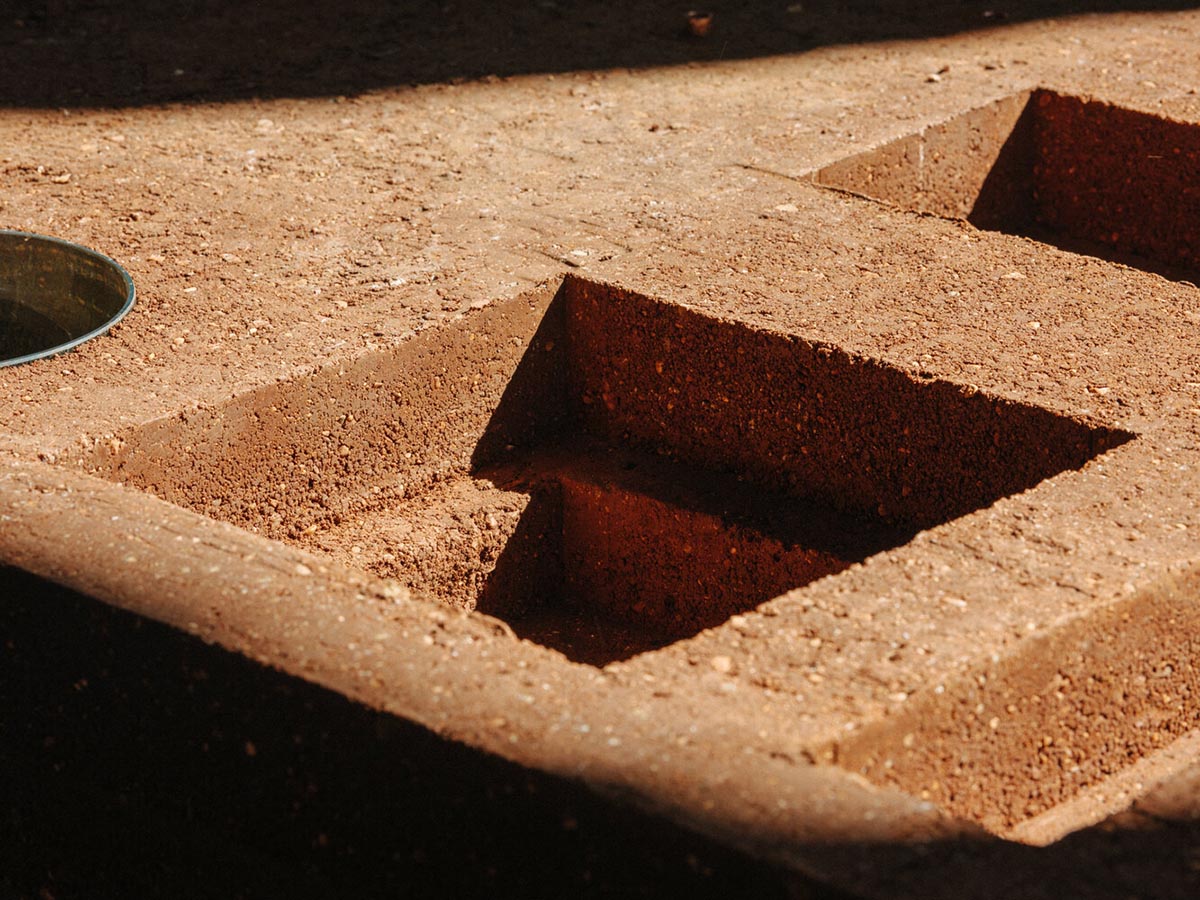 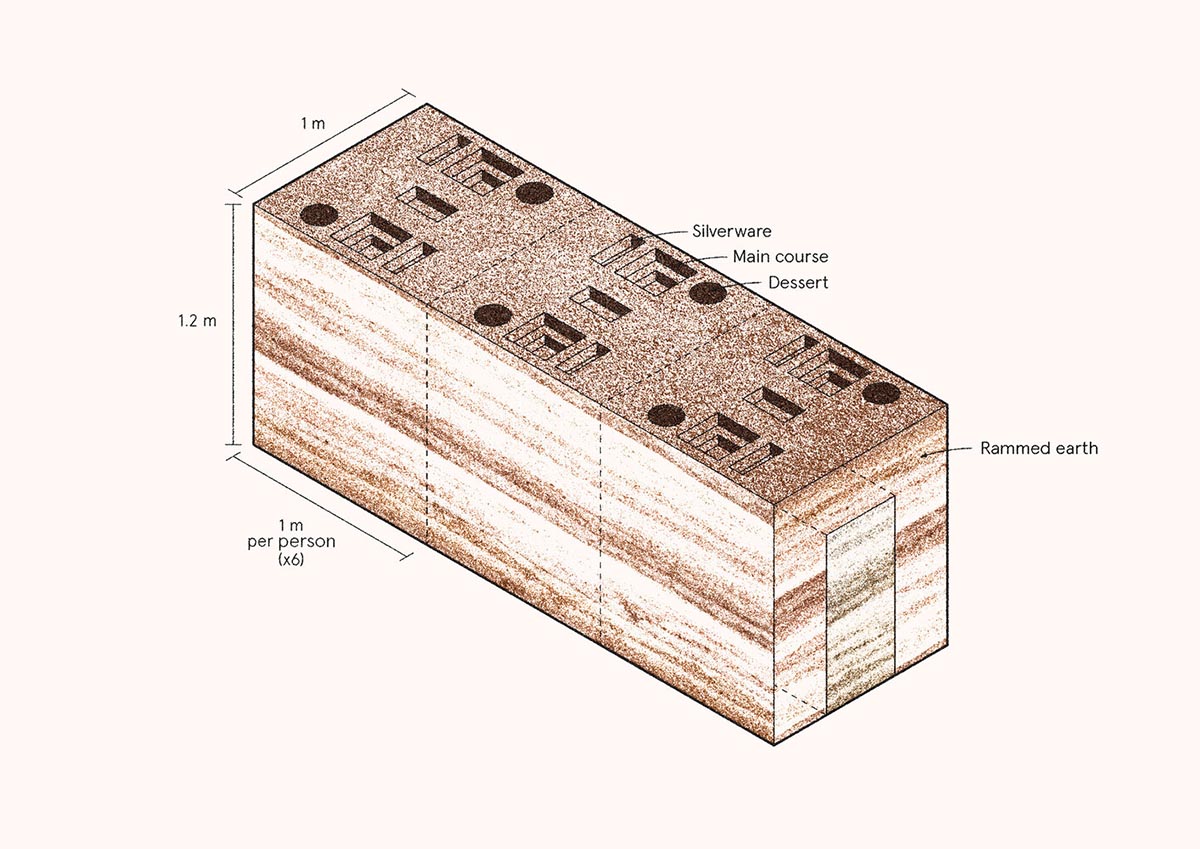 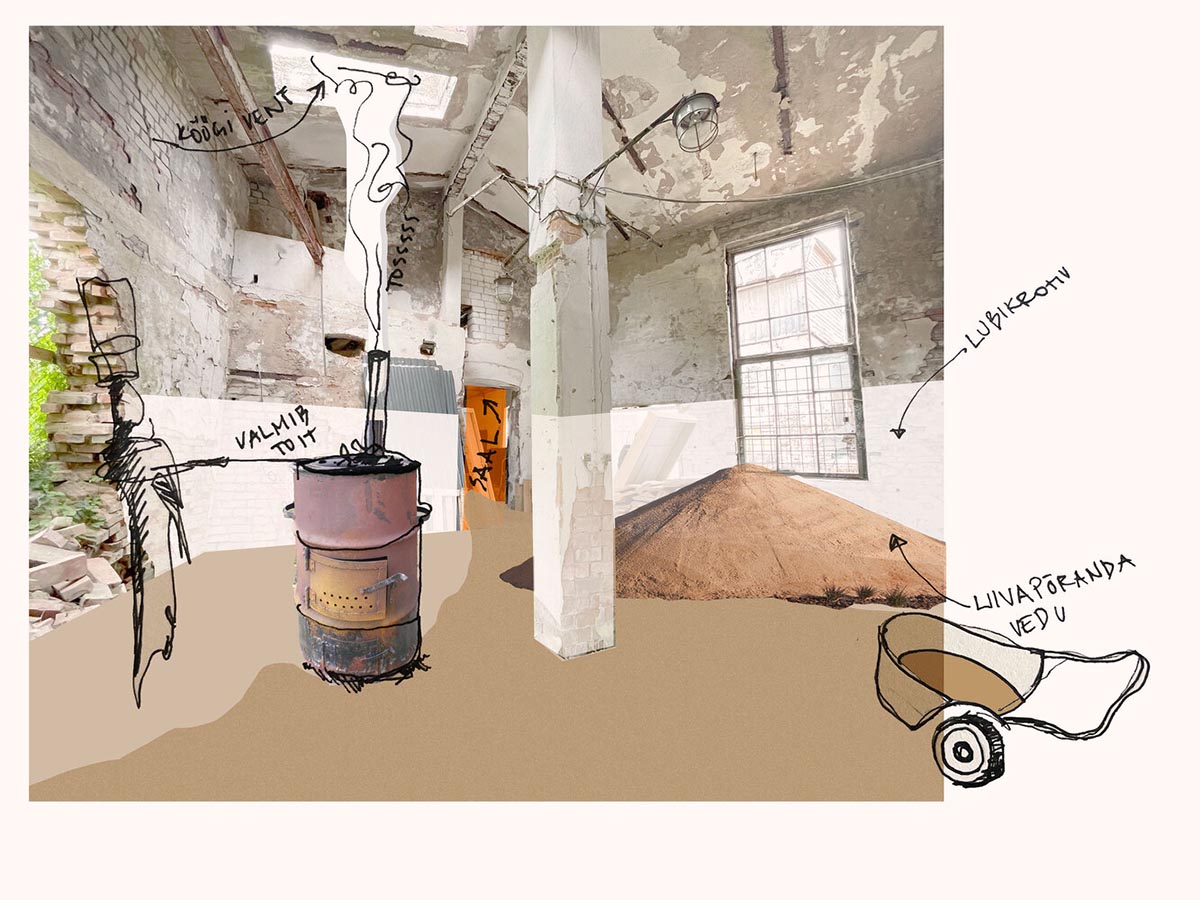 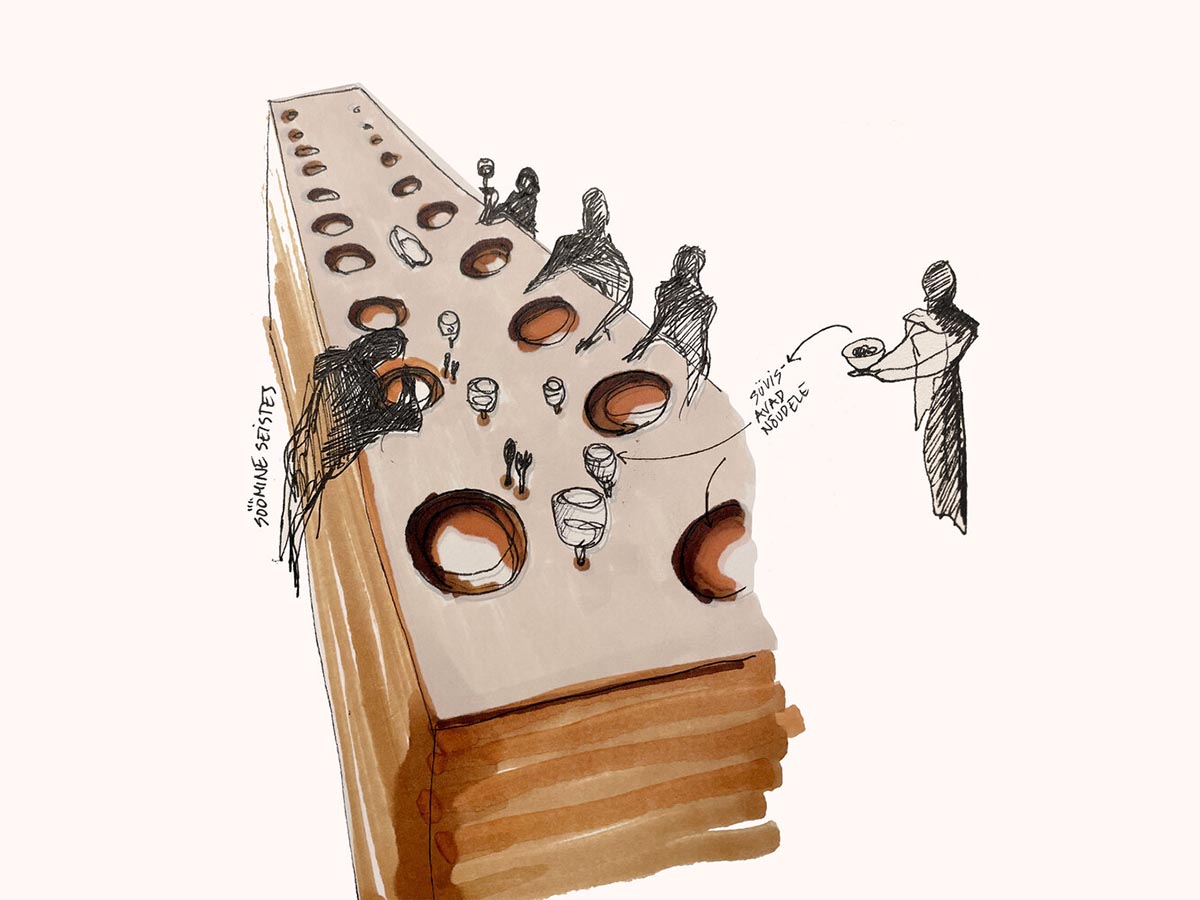 The team of kuidas.works is looking for challenges in bringing the low-tech design and building methods into the public space while thinking of it as an upgrade rather than a downgrade.

The studio aims to shift the paradigm – to bring natural building methods and materials from marginality to normality.

The firm previously designed floorboards, made of rammed earth, in an exhibition focusing on wood in Navan, Ireland.