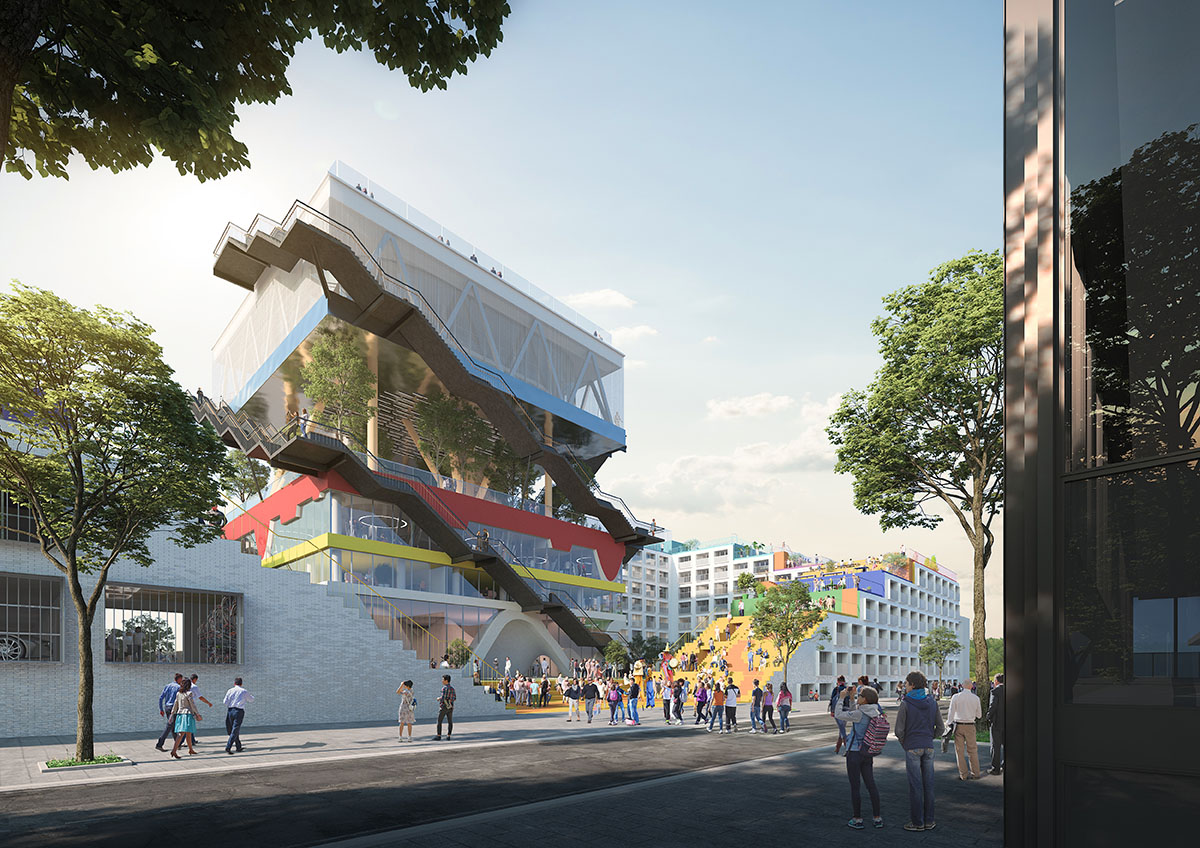 MVRDV has unveiled plans to convert its former Expo 2000 Pavilion into a co-working office building in Hannover, Germany. Designed in 2000, the pavilion is one of the studio's seminal works from the practice’s early years.

The new plans will also include two new buildings on the space surrounding the pavilion, one will contain student housing and the other will be hosting offices and parking.

MVRDV’s design will maintain the qualities – including the forest on the 3rd floor – that made the pavilion an icon of the 2000 World Expo and reinterprets the original project’s concept for the two new buildings.

The design of the original Expo 2000 pavilion was a response to the Dutch theme for the Expo, "Holland Creates Space". Instead of occupying the full site, six Dutch landscapes were stacked into a tower on one portion of the site, while the remainder of the area became an open outdoor space within the Expo grounds. 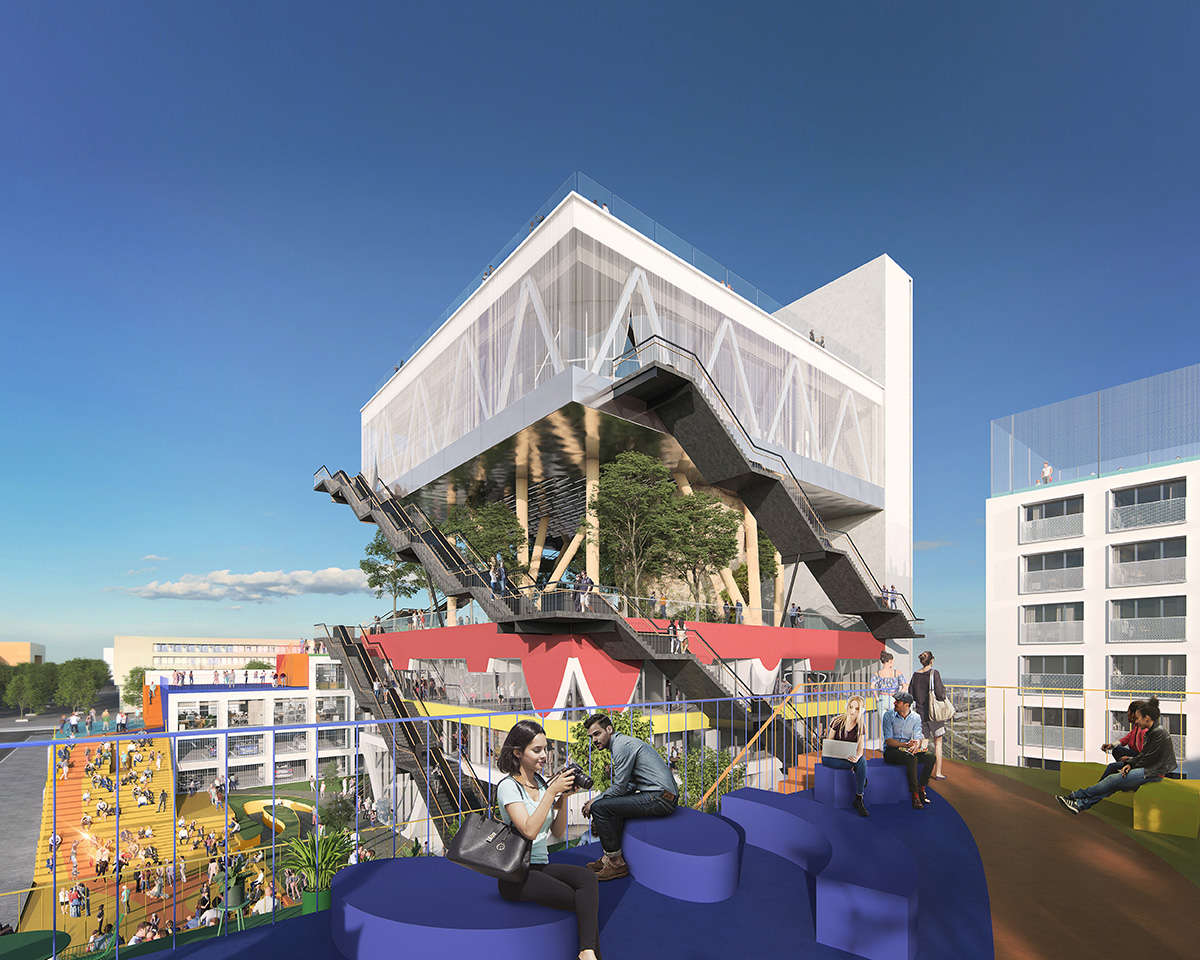 "The pavilion stole the show; for a country defined by its lack of land, the pavilion conveyed the liberating message that nature can be created artificially and stacked vertically," said MVRDV.

"It became a key reference for sustainable design, presenting an ideal of a building as a self-contained ecosystem, incorporating nature and generating its own internal resource cycles."

The current project will keep this “stacked landscape” concept, renovating the existing building and adding two stepped buildings on the perimeter of the original site.

The renovated pavilion will house co-working offices and meeting rooms, with particular attention given to maintaining the features of the original design and converting them into office elements. 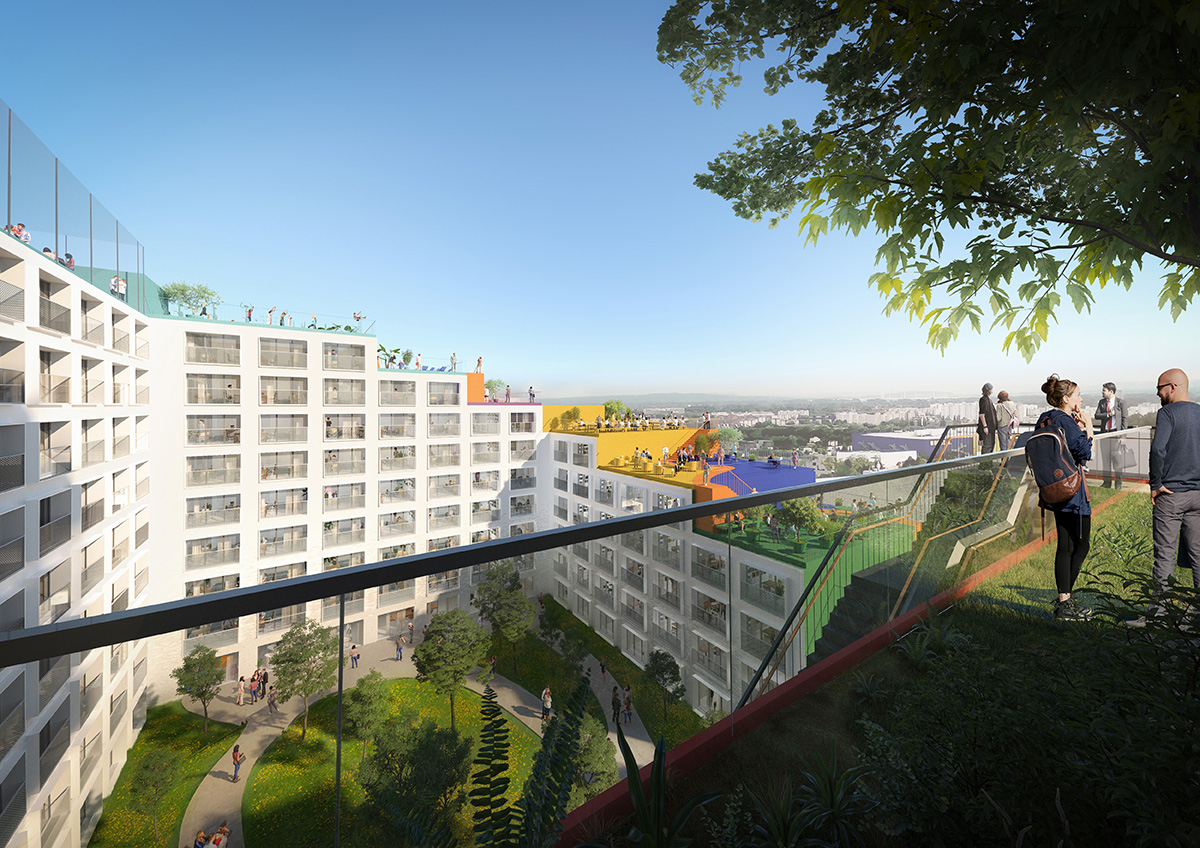 For example the 1st floor, which originally housed a grid of greenhouses, will keep its strict rectilinear layout as an office, while the pods on the 2nd floor – originally planters – will be glazed and converted into meeting rooms and office spaces.

Other features that will be retained are the forest level and the exterior staircases; the ground-level “dunes” will be retained as a meeting point with small cafés and exhibition areas, and the rooftop dome that was formerly home to a restaurant will now host a new fast-casual restaurant. 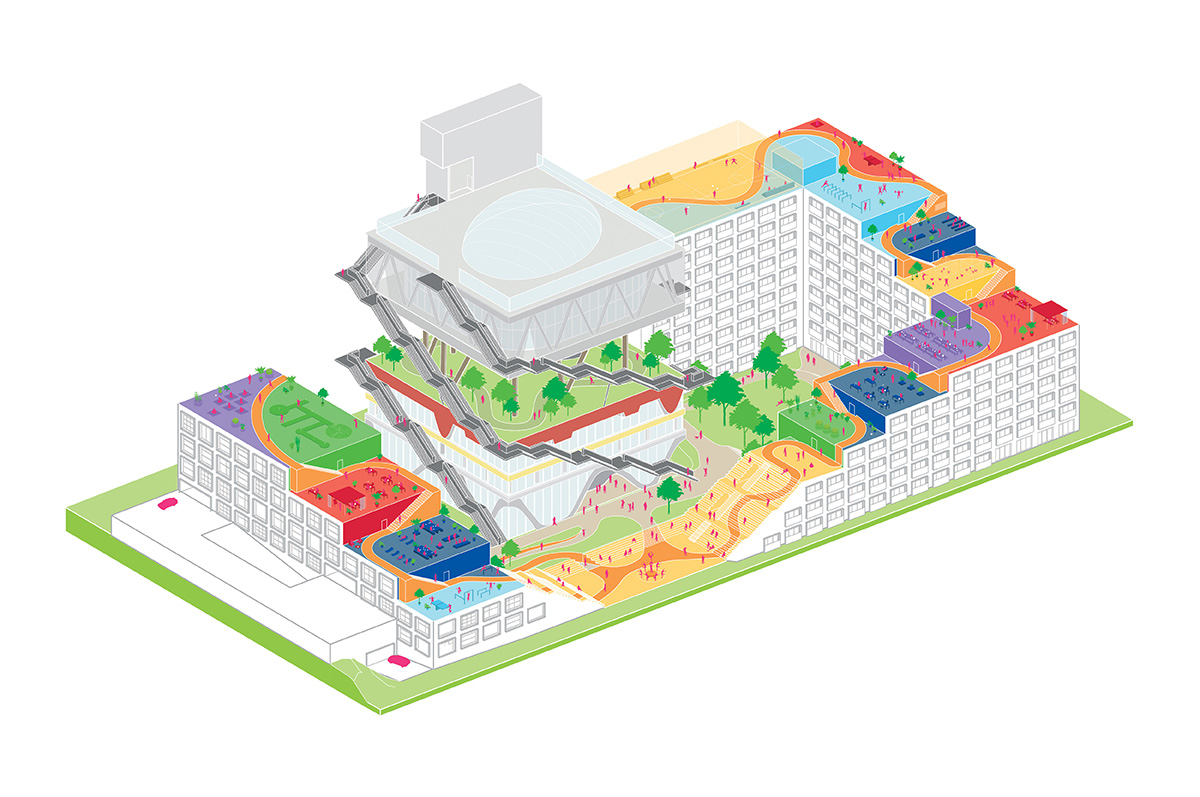 The two new buildings add student housing (in the larger building) with offices and parking (in the smaller building). These form perimeter blocks around the site, stepping down to create an entry point on the west of the site that provides access to the landscaped courtyard in the centre of the ensemble.

In a twist on the concept of stacked landscapes, the new buildings’ stepped roofs will form a series of colourful, accessible terraces with a different function on each terrace, from gardens and sports facilities to study areas and a cinema.

These terraces are linked together by a coloured surface that extends like a ribbon over the new volumes, defining uses and spaces. Where new facades are required to enclose the pavilion, high-transparency glass is used to maintain the design’s open and transparent character.

"It’s such an exciting opportunity for us to revisit this early project of ours that we first worked on over twenty years ago," said MVRDV founding partner Jacob van Rijs.

"The original design was certainly a unique design for a very specific purpose, but despite its outspoken design its core structure is highly reusable and more flexible than originally imagined."

"The differences between the floors will be maintained and converted into a functional office environment that nevertheless retains the unique experimental features of the Expo Pavilion. You will be able to work on the Dunes, or in the forest, or between the treepots," Van Rijs added. 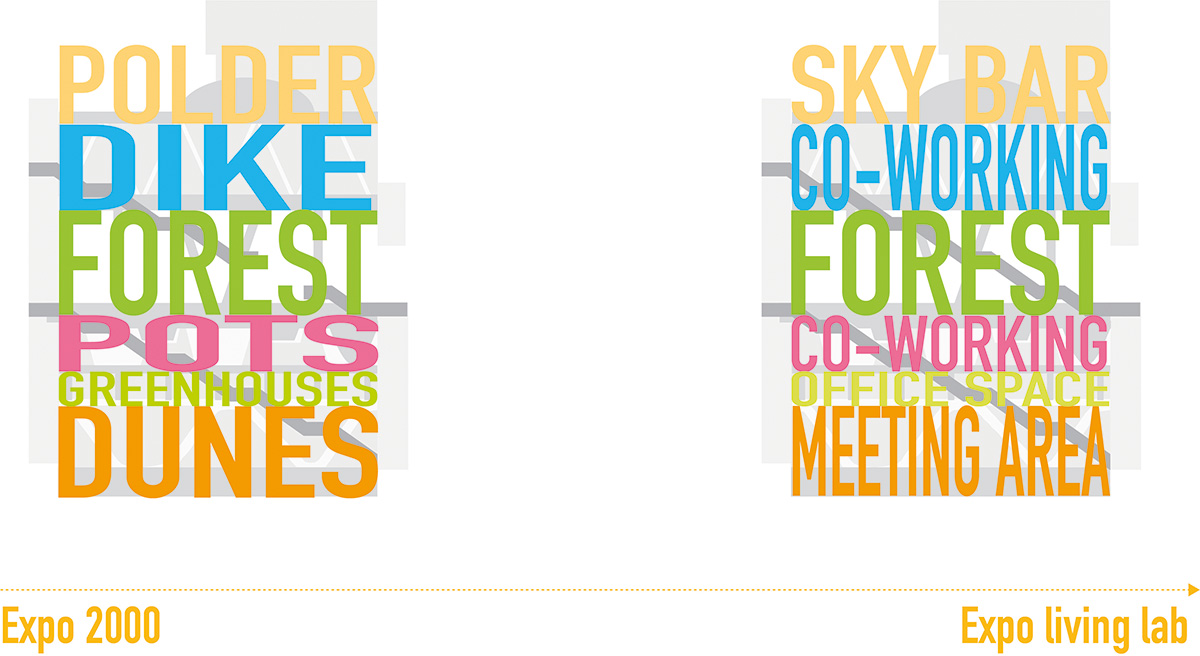 The larger of the new buildings has nine above-ground levels hosting 370 apartments for students. The lowest level includes a bike parking system with more than 300 bike spots.

Meanwhile the smaller building has five above-ground levels and one basement level. The three upper levels host offices and meeting rooms, while the basement and the first two levels host parking for the whole site.

This new phase of the Expo Pavilion’s story builds on the building’s reputation as an important reference for sustainable architecture. Not only will the forest level remain an exemplary instance of natural elements added to the built environment, it will also become a showcase for the reuse of existing structures, showing how buildings can be designed with future adaptations in mind. 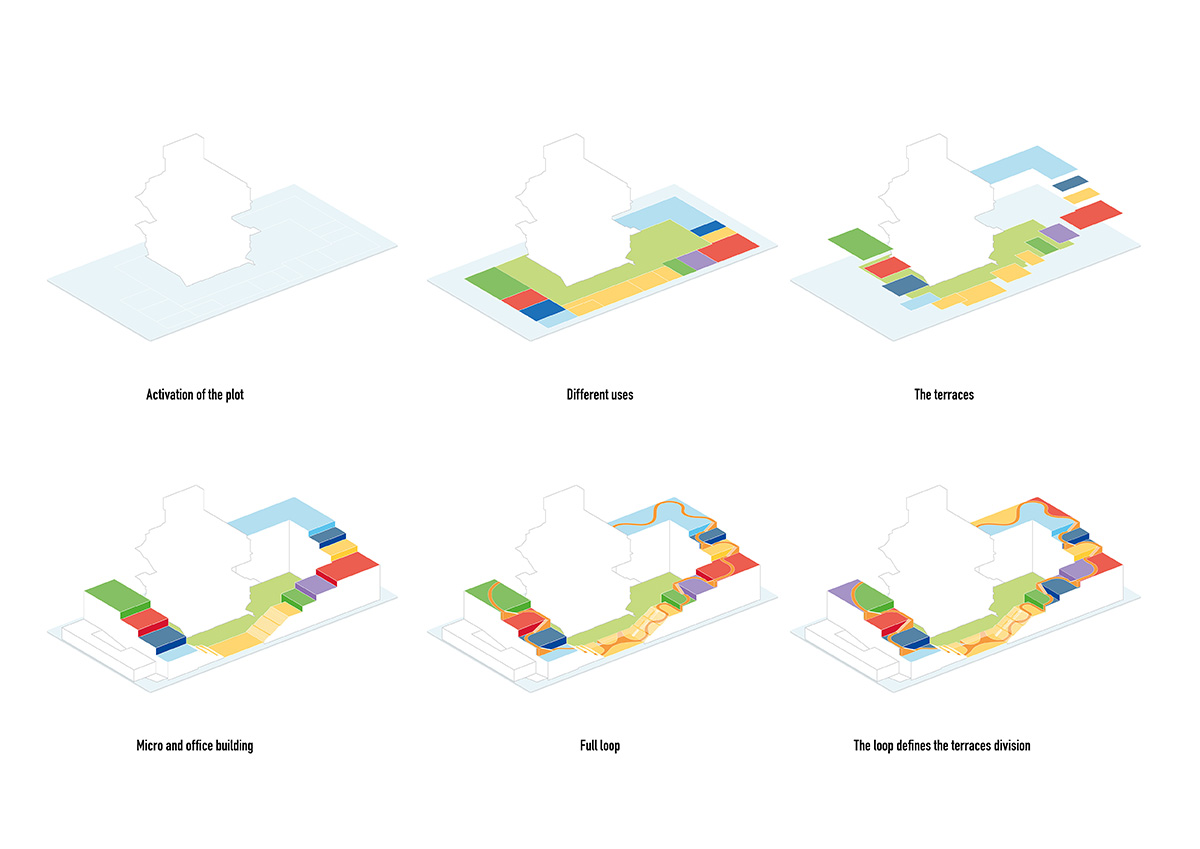 "The original pavilion was not transformed earlier as all previous initiatives – and there were countless – failed. However as the city expanded, the area that was once on the fringes is becoming more active and populated, making new developments possible," explained MVRDV.

"The structure itself stood exposed to the elements for 20 years, becoming a ruin – albeit one in remarkable structural condition, while the forest on the 3rd floor kept growing by itself."

"During this time, the city of Hannover played a crucial supportive role in maintaining the pavilion as one of the few remaining key structures from the World Expo," the office added. 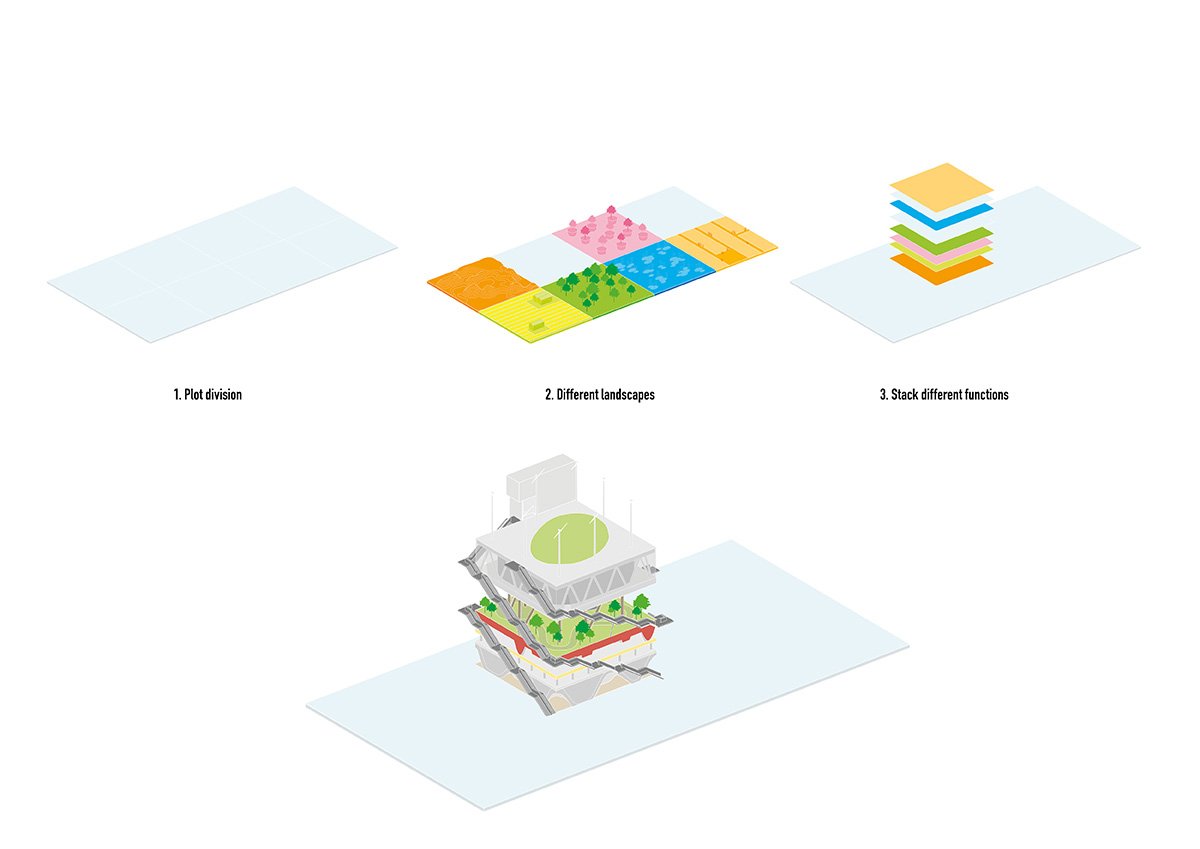 Now, the Holland Creates Space concept in which most of the site remained unbuilt during the Expo proves to be a key element in the re-development. Without the additional revenues of the efficient new buildings, the renovation of the “inefficient” pavilion would be impossible. 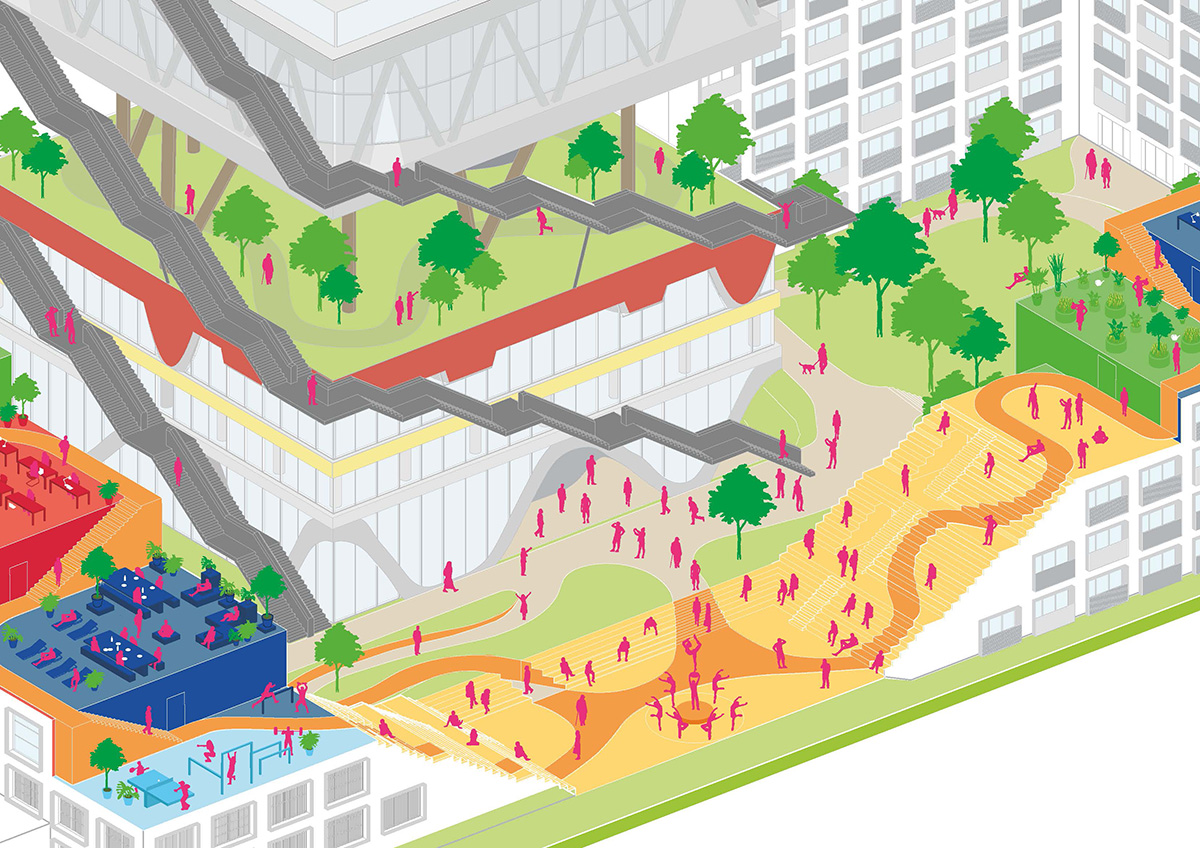 A closer look at the plaza

The renovation of the Expo Pavilion and the construction of the new buildings are being conducted by iLive Expo Campus, a joint venture between the Real Estate developer Die Wohnkompanie Nord and the Micro-apartments developer and operator iLive.

MVRDV is working holistically on both projects with the project coordination on the Expo Pavilion by Die Wohnkompanie Nord and on the new buildings by AI+P Planungs GmbH.

Read the exclusive interview with Winy Maas on WAC.