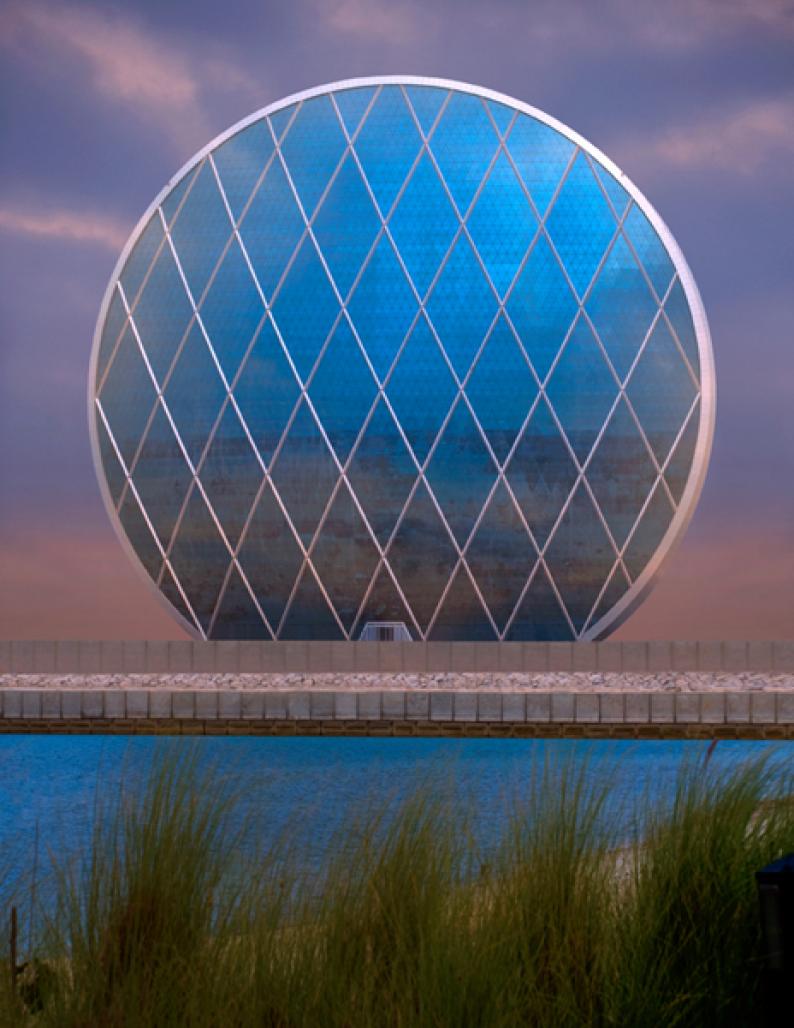 When challenged to create an iconic structure on Al Raha beach, MZ Architects decided to create a simple building that would possess the calm, ideal beauty of classical architecture while also having considerable expressive power, a building that would compete with the iconic architecture of the UAE and create a sense of place and identity for the area.

Inspired by the clam shell which has deep meaning for Abu Dhabi with its seafaring heritage, as well as the symbolism of the geometric round shape, the architects imagined two giant circular curved walls of glass mirroring an open clam shell.
An extremely pure geometrical but daring design was born: a round skyscraper with a curved glass skin.

Developing the concept, the ideas of simplicity, purity and learning from nature, were coupled with the reliance on one of the oldest rules of architecture: that of proportion. In fact to help MZ Architects bring their concept to life, the issue of stability proved to be a crucial one for the circular building. The architects took the challenge and elevated it by looking back at the idea of the cosmic body of the man in the circle and by inscribing the pentagram into the circular façade, they were able to locate the two points of stability; the two points where the building will meet the earth.

The complexities of simplicity indeed proved to be many, and the design of the HQ could only be a holistic one, merging architecture and structure. It became an object of both fields, showcasing the expansion and blurring of their respective limits in order to form a combined product.

Like many of nature’s creations, the building comes together by allowing each one of its elements to play a crucial role in its being and construction. Just like a seashell, HQ’s morphology merged the idea of shape, sculpture and pattern into one unified and expressive whole. The curved glass skin became one of its most complex components to be executed in record time.
The diagrid system, one of the first to be used in the UAE, allowed the creation of structural efficiency and stability appropriate to the circular building. The system not only helped minimize the impact of the steel frame on the façade but also served as an architectural element that blurred all sense of scale and inflated the structure, moving away from the typical horizontal stratification of the facades that influenced most highrises in the area.

In order to solve the challenge of the façade curvature, triangular pieces of flat glass combined into diamond like shapes, came together like a puzzle working with the diagrid and the highly complex geometry of the skin.
Unlike the conventional four sided buildings, the project challenges the approach to construction by questioning the typical roof structure. This three faceted building relies on its zipper-like element, a continuous glass and structural band that stitches the two main facets together, creating a slim continuous surface that is both vertical and horizontal, side and face, window and roof. This lateral element, the structural ‘backbone’ of the project, brilliantly creates the fusion between façade and roof and allows for the monolithic shape of the object.

The client wished to have their building completed by an astonishing deadline, the inauguration date of Abu Dhabi’s first Formula One Grand Prix, so that the masses predicted to be present at the event be able to contemplate their HQ and visit it. Therefore, the design and construction schedule had to be done in a record time of 30 months.
In order to meet this deadline, the project team composed of MZ Architects, Arup, the MEP consultant, and the facade and steel contractors worked closely together, with a significant overlap between the design and the construction phases. This contractual joint venture arrangement was key to the successful design and construction of the project.

The diagrid: The HQ structure having a 25m cantilevered design in every longitudinal direction, concrete couldn’t be considered as construction material. A concrete structure would have required unwanted internal supports and entailed time-consuming and costly on-site construction work. Therefore, the team developed a complex external diamond-shaped steel structure, called a diagrid, which achieved the striking shape of the building. The first of its kind in the UAE, the diagrid allowed the creation of structural efficiency and stability appropriate to the circular building. The system not only helped minimize the impact of the steel frame on the façade but also served as an architectural element that blurred all sense of scale and inflated the structure, moving away from the typical horizontal stratification of the facades. This diagrid system eliminates the need for internal columns to support the building which would compromise the aesthetic appeal as well as the views from within. This improved the buildings efficiency, providing layout flexibility for tenants. Although having 23 floors, the building has the same floor area as a typical 40-storey tower.

The façade geometry: The main facades were defined using a toroidal geometry cut by a cylinder to create the perfect circle in elevation. By using this form, each horizontal section through the façade is described by a circle of varying radii at different heights all with their centres along the same vertical axis. All panels on one floor are then exactly the same size with the same angle change at each joint due to the equal chord lengths along the circular line in plan. The rate of change of size of panels increases as one moves further away from the equator of the building with the top and bottom of the building being an exact mirror image of the other. To further increase the repeatability of panels the joint sizes were sized so that the same panel could be utilized over a number of theoretically geometrically different floors without being able to visibly see the change in joint width. This exercise allowed the initial architectural vision to be created with approximately ten panel sizes instead of the original 10,000 sizes that would have been theoretically needed before the geometry refinement.

Seismicity and Wind Factor: The seismic hazard in Abu Dhabi is dominated by small local earthquakes, but with a significant contribution from large earthquakes in the Zagros and Makran source zones in Southern Iran. A factor of zone 2A was adopted in the design of the HQ building based on advice from the municipality. The seismic design criteria (Ca & Cv values) for the PC-814 Aldar HQ site according to UBC(1997) are 0.09 and 0.13 respectively.
As for the wind factor, Abu Dhabi is regularly hit by high-pressure winds and spectacular thunderstorms that sweep in from the Persian Gulf, with wind speeds that could escalate up to 37km/h. To gather accurate data with regards the wind impact on the building, wind engineers built a scale replica of the entire city. This gave them insight into how winds moved across the landscape, and more importantly, how the winds would impact the structure of the project. Their conclusion was that the unique circular shape of the HQ, with a narrow base and wide edges, puts it right in the danger zone facing the wind as the building is expected to capture wind like the sail of a yacht, with pressure on the building’s narrow base and foundations. In order to face this pressure, the loading was determined based on a wind speed of 38m/s, to BS 6399-2. The design has been refined using the results of the wind tunnel tests and the wind loading for final design is based wholly on the wind tunnel results. For both structural and cladding pressures, a nominal 50-years period was adopted with a basic 3-second gust wind speed of 38m/s at 10m in open country.

The development process: An innovative method of Analysis and Drafting was adopted during the construction of the Aldar HQ building. Engineering and model data were used at the earliest stages of the project to take full advantage of early procurement and optimized use of material. The structural analysis of the podium and tower superstructure was undertaken using the 3D finite element analysis program, Strand 7. The advanced 3D models developed by Arup were shared between the Engineers, the Architects, the Steelwork Contractor, the Façade Contractor and the MEP consultant, who were each able to import the model into their own 3D modeling software. Within 3 months of the design team’s appointment, piling work had started on the site. Foundation works began just 1 month after the design was sketched, before a full set of plans was developed by the engineers. The concrete cores were completed within a year. Within 14 months of the project start, the steelwork was already erected up to the fourth floor. Concrete elements, such as stairs, columns and even the bathrooms, were pre-cast.

Number of Floors Above Ground: 25

Number of Floors Below Ground: 5