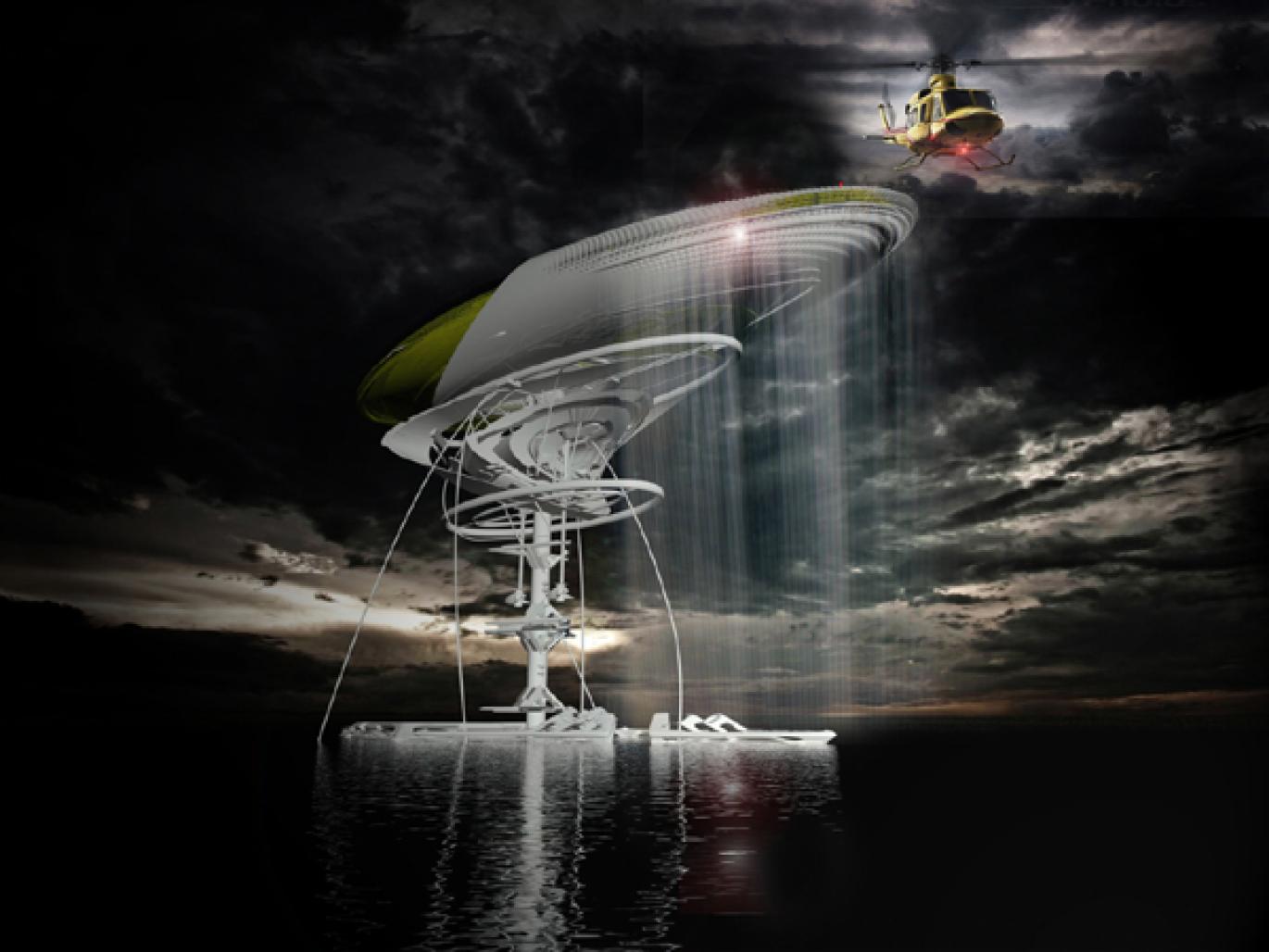 The prison is located in the Pacific Ocean close to the Canadian coastline.
The main program is a sustainable prison which acts as a hydroelectric power station. Constructed of reinforced concrete, its vertical structure consists of a floating tension-leg platform tethered to the seabed eliminating most vertical movement, with depths up to 2,000m.

The concrete support is connected to 4-column semi-submersibles further stabilised by a structural ring of floating Tyson turbines.
The prison consists of a series of cantilevered loops creating an even weight distributed throughout the rig. The contained prison surface is made from a web of reinforced steel elements embedded within holographic filtered glass panels, superimposing views of life inside and views out of the prison, this depth of field creates a surreal environments which gives the illusion of boundary-less architecture, a kaleidoscopic panopticon.
The current design uses principles behind a pumped storage hydro electric power station.
Pumped storage facilities use excess electrical system capacity, generally available at night, to pump water from one reservoir, in this case the ocean to another reservoir at a higher elevation which is the prison hold, the height of the prison hold is approximately 50 meters. During peak electrical demand, water from the prison hold is released onto the floating turbines in the ocean, and electricity is produced. At times of low electrical demand, excess generation capacity is used to pump water into the prisons hold.
A secondary ring of wave energy convertors (similar to The Pelamis ) float around the main structure which are used to pump and store water into the main section of the design, the prisons hold. The buoyancy hydro force within the funnel of the main concrete vessel structure contributes to the pressure pumping water up into the prison volume hold before it is let out through it’s surface onto the Tyson turbines below, this alters the height of the prison deck and the pressure hydro release. The sored ocean water is distributed through the nozzles within the carbon fibre clad cantilevered outer prison surface. The surface choreographs the amount of pressure and water to fall onto the floating Tyson turbines below, controlling the amount of electricity generated.
Floating Tyson turbines turn a shaft when water falls onto them, powering an electrical generator housed housed within the primary concrete structure located in the artificial cliff-side. Underwater cables run the electrical power to the mainland.
In light of recent advances pumped-storage hydro is the predominant renewable energy source available to balance intermittent resources, such as wind and solar. Pumped-storage facilities can enable a reduction in greenhouse gas emissions and build a cleaner renewable energy capacity.
12,000 cubic meters of water are stored in the prisons hold, available as necessary, the head is 50 meters and with a contributing hydro pressure the electical energy produced is approximately 3.2MW providing on average 2,045 homes with electricity.

Prisoner cells are lined with semi transparent optical mirror which provides superimposed views into and through the cells, giving the illusion of an open plan space. The continuous loop of cells distribute weight evenly across the cantilevered ramp. Ocean water that is pumped through the cladding screens views and camouflages the prison when the turbines are operated.
The central circulation spiral staircase connects the heli-pad to the artificial cliff-side generator, it acts as a base from which to observe the inmates. Helicopters are only allowed to land when the Hydroelectric generators are shut down.

The second stage of the design will implement the ideas behind low level and high level hydroelectric power stations, the important factor is the volume of water stored within the prioson and the vertical drop. The design will be adapted for these necessary changes.