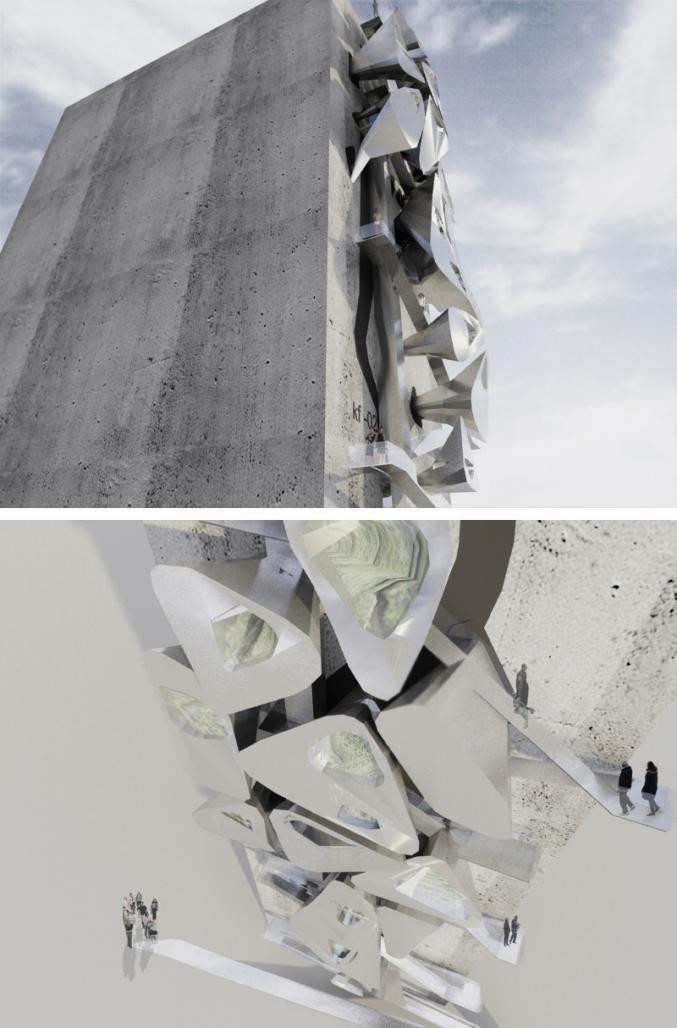 
A research on the city

90 Degrees architecture is a research on the urban environment of the city of Milan.

The idea informing this projects is to work on parts of the city uncompleted and never solved, without any urban or architectural quality. Our specific interest is to act on the never finished and never designed blind facades of buildings results of a failed development of the urban fabric and of a lack of design.

Our interest is focused on these “Walls” that, in the best of the circumstances, are spaced dedicated to commercial posters or low quality decorations and just in very few cases solved, usually through the use of green climbing natural patterns.

The concept is to use these vertical surfaces as “buildable lands at 90 degrees” and to “attach” to them volumes and architectures as parasites: parasites intended as addicted parts of the existing buildings but improving the quality of the constructions they are applied on.

We “attacched” volumes, habitable or not, but always visible and viable, introducing functions compatible with the city needs, such as bars, restaurants, hotels, residences and panoramic spaces, vertical walking paths, suspended gardens, sculptures.. connected to the street level by stairs, elevators, ramps and escalators.

In some cases the “parasites” have just a visual panoramic and perceptive function.

It is a work in progress and at the moment we developed some particular proposals, more or less complex, but they are the first samples of a study on the city that represents a big potential for the city and and the way to approach its problems.

At the moment we considered and studied proposals on building in Milan and precisely in Porta Venezia (three cases), Via Ripamonti, viale Monza, via Padova, piazza Libia and piazza Corvetto, located in central and peripheral areas of Milan.
Every proposal is different in the spatial and formal conception and the related functions are various.

These experiments of architecture are strictly connected to recent examples of parasite architecture and the architecture of the addiction, a topical subject nowdays: in our specific cases they are development of some researches and proposals we carried on the Housing Projects of Mnhattan, Brooklyn and queens in New York City.
Our experiments, collected under the name “Housing Projects Operation” consisted in produce alterations, both spatial and functional, on the Housing Projects.
The operations were 3: addiction, subtraction and connection.
The additions consisted in adding volumes and surfaces of the facades and the roofs of the buildings, changing dramatically their aspect and their way of functioning.
The subtraction consisted in carving the buildings, removing some parts and creating open and unexpected spaces, the enriched the perspective impact and the usability.
The connection consisted in the prevision of elements that can link and relate, spatially and visually, the different building, breaking their isolation.

Our research 90 degrees Architecture presents sometimes the characters of ephemeral architecture and sometimes is conceived as a permanent solution to determinate urban situations.

For the moment we studied, on the “Walls” the cases of the architectural addiction and connection, but we are convinced that even the subtraction operation can open the way to very interesting results.