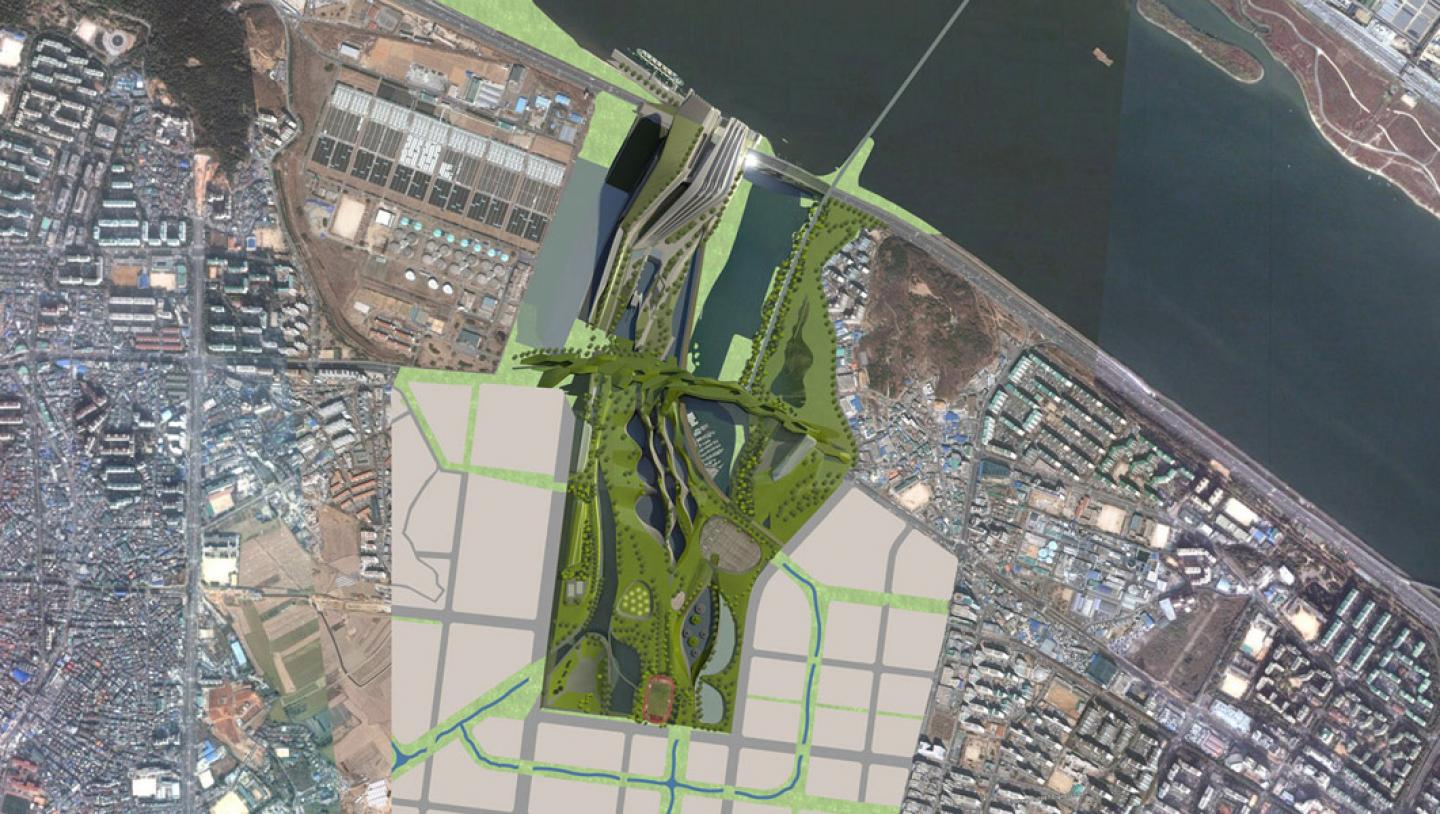 This project aims to improve water transportation connecting the Han River to the Yellow Sea, while simultaneously creating a well-developed waterfront environment. The waterfront area (1,170,780 sm) will house all necessary facilities and amenities and will transform the area of Magok into a tourist, commerce, and environmentally friendly waterfront area in accordance with Seoul’s “Han River Renaissance Project”.
::::Inter - City : The Inter - Face, Inter - Link, and Inter - Weave of the Magok Waterfront Development ::::

The Han River. As a resource, it is finite, necessary, and increasingly valuable—even though the locals treat it otherwise. They feel the abundant rainfall each year and they shrug at the possibility of a water shortage. But it is imminent, especially when Seoul currently ranks #5 in water use, topping London and Beijing. Meanwhile, Seoul, a city bisected by the Han River, has willingly estranged itself from the culture of water, because of its development history and its habit of disconnecting citizens from the Han. After all these divisions, only a waterless image of Seoul remains in the mind. The Inter - City approach to the Magok Design Competition is to revive this lost connection to the Han River through interaction with water and to renew its appreciation among Seoulites. For the older generation Koreans, the Han River conjures memories of cooling in it, ablution, women washing clothes, irrigation for rice crops, and seasonal floods. Many things still run in the river: last century’s war, the footsteps of migrants escaping the north, dreams, inspirations for poems, paintings, and songs, and the entire history of a nation. The main goal of the Inter - City design is to remove barriers to experiencing the river whether it is through touch, taste, smell, or even more cognitive means -- making new memories, reflecting individually, and sharing its past, present, and future. To achieve this, the Inter - City design proposal offers extreme accessibility to water by integrating water experience at every possible component: by celebrating the inter-face where water and land meet, by inter-linking water programs throughout, and by interweaving water throughout the physical, programmatic, cultural, and historical experience. Inter - Face. Another goal is to set the Han River as the iconic image of Seoul. This will be achieved by providing recreational and educational opportunities and by building Magok as the center for visitors and the source of pride for residents. In the proposed design, Magok Waterfront is a convergence of water recreation, history, culture, and education -- an interface for all these elements. Where water meets land is where the infrastructure allows nature and humans to coexist. Inter - Link. The physical transformation will interlink habitat corridors and habitats for indigenous plants, animals, and insects, all in open spaces for recreation. Here, education will prosper, floodplains of the past will return stronger, and a microclimate will maintain along the water. Specifically, the open spaces will offer aquatic activities, give rise to awareness of water treatment, conservation, and ecology, reach across all ages and socioeconomic backgrounds, begin a new culture in the southwest Han where it is lacking, and finally, invite public recreation as a possibility to city-cloistered-students. Inter - Weave. This initial project will serve as catalyst to waterfront development that incorporates sustainable technology and culture along the Han River and Han Renaissance. The interweaving of various programs will allow the people to experience water by cleaning and reusing water within the site, and encourage future projects to cater to nature development while maximizing linear water area and water interaction at every level.
Inter – City. The proposal intends to strengthen existing infrastructure plans within Seoul. It both supports and depends on existing green networks, as well as planning future ones. It practices the adaptive reuse of existing sewer treatment facilities. It keeps active existing subways and it plans on transit corridors to serve programs.
To summarize, the design emphasizes the value of water, keeps its finite quality in social awareness, and introduces a new water-focused lifestyle at Magok. The seasons change and with it, the way that water is celebrated, and so the proposal foresees interactions for the calendar year -- a skate park in the winter, a water park in the summer. The Inter-City will bring back fond memories to yesterday’s Seoulites while allowing today’s to make new footprints in the Han River.

Because rainy season is limited from June to July, Korea experiences water shortage for most of the year. To achieve a self-sustaining environment in Magok, an extensive water management. The proposed water management system stores stormwater into underground cisterns for landscape and urban farming irrigation. In addition, greywater from surrounding buildings will be discharged to bioswale and bio-retention ponds where grey water will be purified. The filtered water through bioswale and bio-retention ponds will flow to Magok
waterfront. During drought season, the pumps, operated by renewable energy, will circulate water from Han River to bioswales.

Magok Waterfront : INTER-CITY by UnitedLAB in Korea, South won the WA Award Cycle 10. Please find below the WA Award poster for this project.