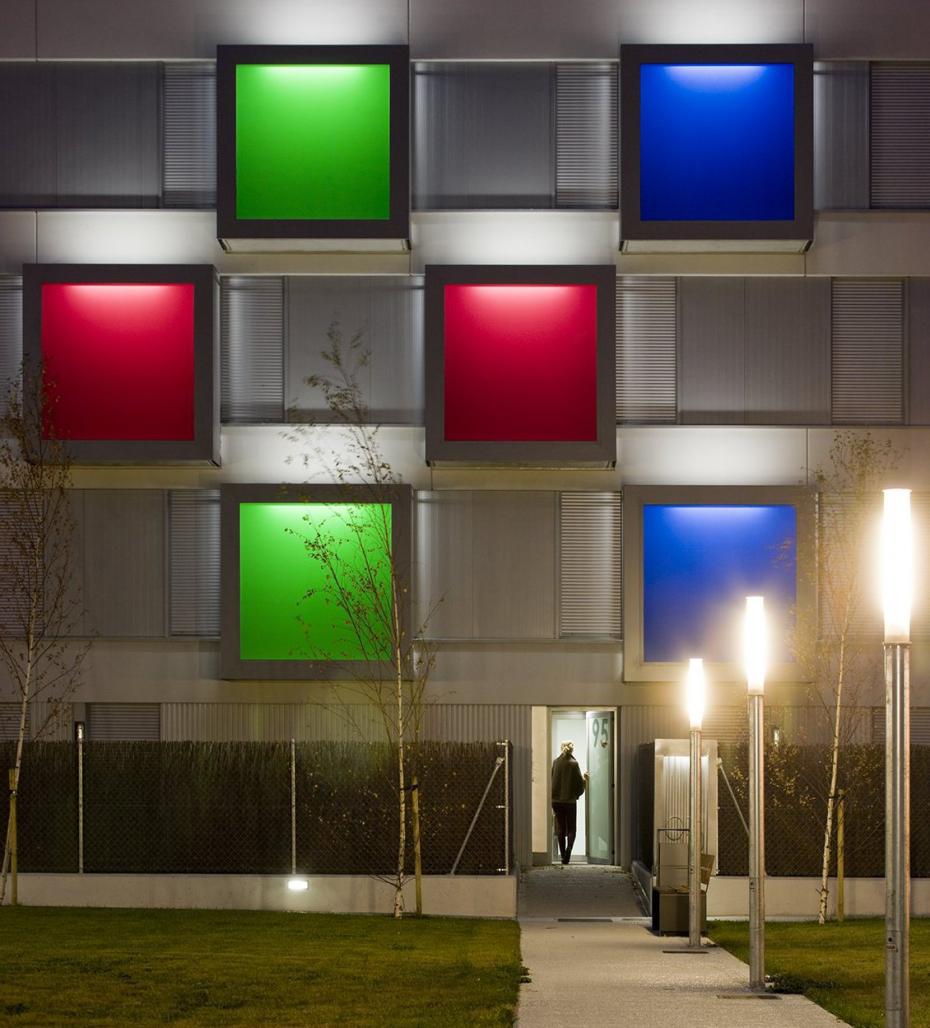 This Project has been the result of great effort dedicated to the design of high quality and functional social housing that improves the occupants’ quality of life.

These initial requirements not only overreach the definition of the housing – as individual, isolated units – but also lead on to a second set of requirements that are of equal importance: from the outset, the intention has been to provide the proposal with a sense of unity that reinforces the character of the city block as a collective entity and as a space for human relations.

As a first consideration, with the idea of unity in mind, two blocks are arranged that appear as clean, pure prisms, clad in prefabricated concrete, that repose on a solid plinth of in-situ concrete. The separating space is where the most fundamental urban stage is established: the interior communal garden.All of the entrances are derived from this urban space, by this way we reinforce its character of centrality and public interaction.

As a primary measure that gives dignity and functionality to the apartments, the nocturnal and diurnal zones are clearly separated. To this end, all of the bedrooms are orientated toward the external streets whilst the living rooms and kitchens give onto the interior space that constitutes the central focus, shared by the community. In this way, the diurnal zones, where each family conducts its communal activities, has a visual relationship with the external communal space – the true axis of the project.

Once the guiding principles where established, the activities carried out in the interior of the building where translated to the language of the corresponding facades. Arbitrary formalisms have been avoided, passing instead to the “notification” of each use on the treatment of the facades, reflecting the needs and character of the spaces that are protected by them. The marked distinction between diurnal-nocturnal on the floor plan translates to a differentiation in the façade treatment based on solid-light between the interior and exterior facades. For this reason, the project demonstrates a clear difference in form and materials between the facades that are orientated toward the street and the facades that look onto the interior garden.

As an architectural strategy, a compact and solid aspect was sought for the exterior whilst permeability and lightness was applied to the interior. In order to achieve this, the bedrooms present a long iteration of almost square openings, regularly placed in such a way as to organize the façade through the placement in series of a single cladding panel type. In this way, the expressive potential of the concept of concrete prism is maintained, being supported lightly on the cruder plinth below. From a construction point of view, an industrialized process is achieved without compromising the dignity accorded to the buildings use.

As a counterpoint, the interior facades present horizontal bands that run along their entire length and which correspond to each floor. The latter are framed between bands of horizontal prefabricated concrete panels. These bands are accentuated by using square, aluminium frames with lightly coloured translucent glass that cover the external laundry areas. In this way a flexible structure is achieved that, between rigour and randomness, characterizes and differentiates each habitable unit without compromising the solidity of the whole.

On the other hand, ah asociados in collaboration with ONN Outside has been immersed since 2008 in the design of the SMU series of urban furniture. The design, based on a clean aesthetic, has been recently launched in the market. Previous to the launching, ah proposed the installation of this series in the garden areas in the inner courtyard to the client. In this way, the design could be analyzed in a real situation with the aim to identify possible improvements.