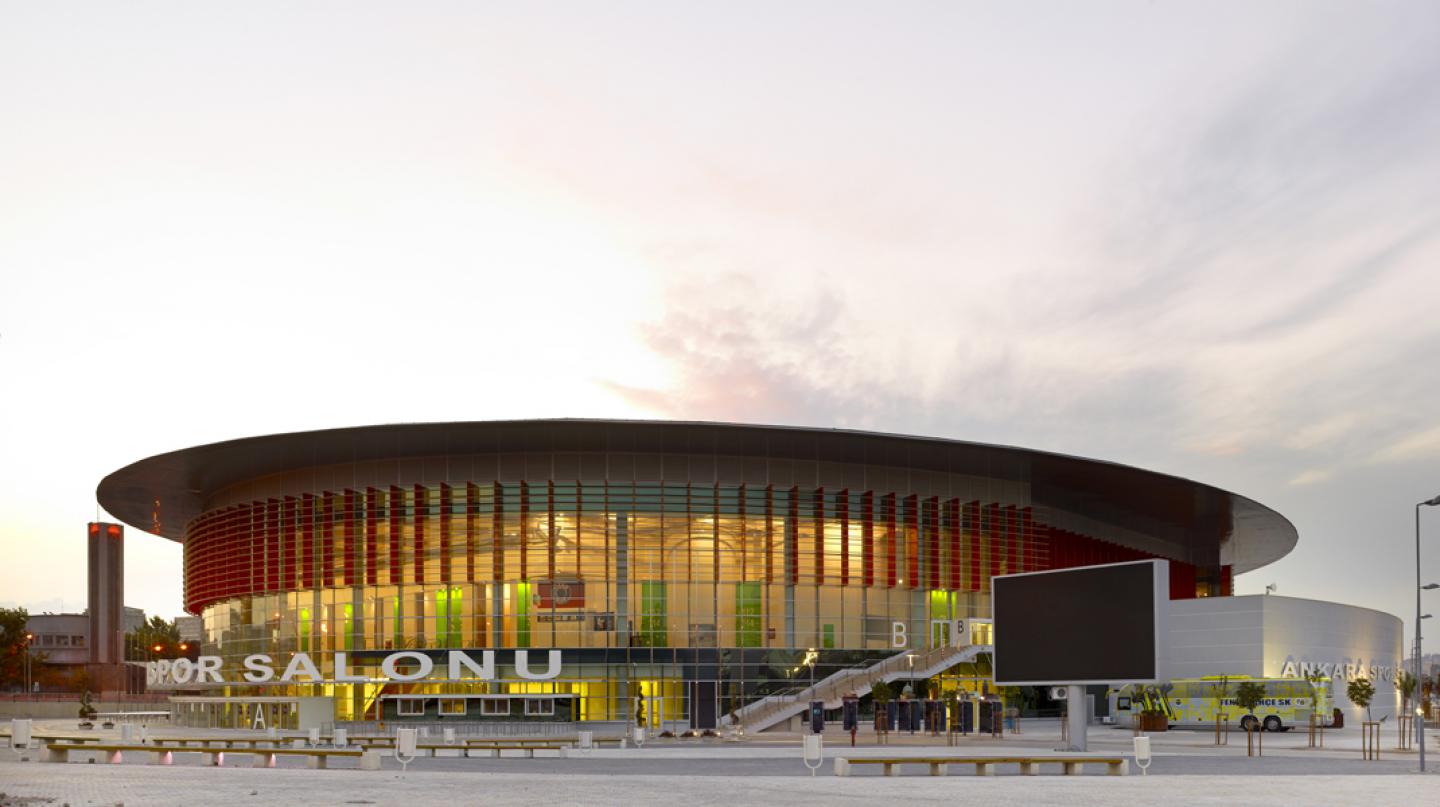 Firstly, a relationship was sought between the surrounding regions by implementing an urban plaza as a meeting point and an event space for inhabitants, -with its way leading towards the Railway Station. In addition, a pedestrian axis -surrounded by trees in both sides- is designed to start a relationship in between the zone which harbors Ataturk Cultural Center and the one which harbors the youth entertainment park. The building has no boundaries, like fences or gates. Unlike typical sports halls that become a vacant place in times when there is not any sport activity taking place, Ankara Arena is part of a living city with its plazas and walkways. It is possible to access the place through public transport, like metro, bus or train. The number of car parking is put to minimum in order to enhance arrival through walking and public transport.

Secondly, rather than accomplishing an introverted typology, an extraverted design was considered. A transparent façade and terraces on certain levels were designed in order to render inhabitants develop visual relationships with the city in every direction. Diverse architectural elements, which are put layer by layer from the outside to the inside, such as tension rods, white horizontal sunshades, orange vertical sunshades, curtain wall, brut concrete columns, white foyer walls, green colored entrances, orange public toilet walls, increase the depth of view from the outside to the foyer walls behind. The building’s volumetric effect is decreased not only through the transparent façade, but also through rendering 15 m. cantilevered eave structure thinner, like the wing of an air craft. The eaves have depth only of 12cm. on the front, and become 7,5m. in the center in order to carry the giant screen. Sunshades not only bring depth of view; but also give color and rhythm to the façade as well.

Although the building is designed mainly for sports activities, such as, basketball, volleyball, tennis, ice hockey, boxing, etc., it can harbor such cultural activities like concerts and congresses. It meets all the design criteria put out by FIBA (International Basketball Federation). Furthermore, it follows universal design principles; disabled and elderly people, and families with children can easily access and circulate throughout the building. There are private lodges for the disabled. The tribunes are designed via the development of parabolic sections in order to develop an equal angle of vision for every audience. A significant landscape planning was developed, with a considerable amount of tree, for not only the area itself, but also the surrounding approach routes.

Ankara Arena Sports Hall -with 10.000 people capacity- is built on a 46.000sqm. land, which is located at the zone reserved for sports activities through the master planning of Ankara. The 53.000 sqm. building is in between historical buildings, such as, 1st. Parliament, Parachute Tower and Turkish State Railway Station. Being at the center of the old city of Ankara, it is designed considering the particularities of a special context and its urban life.