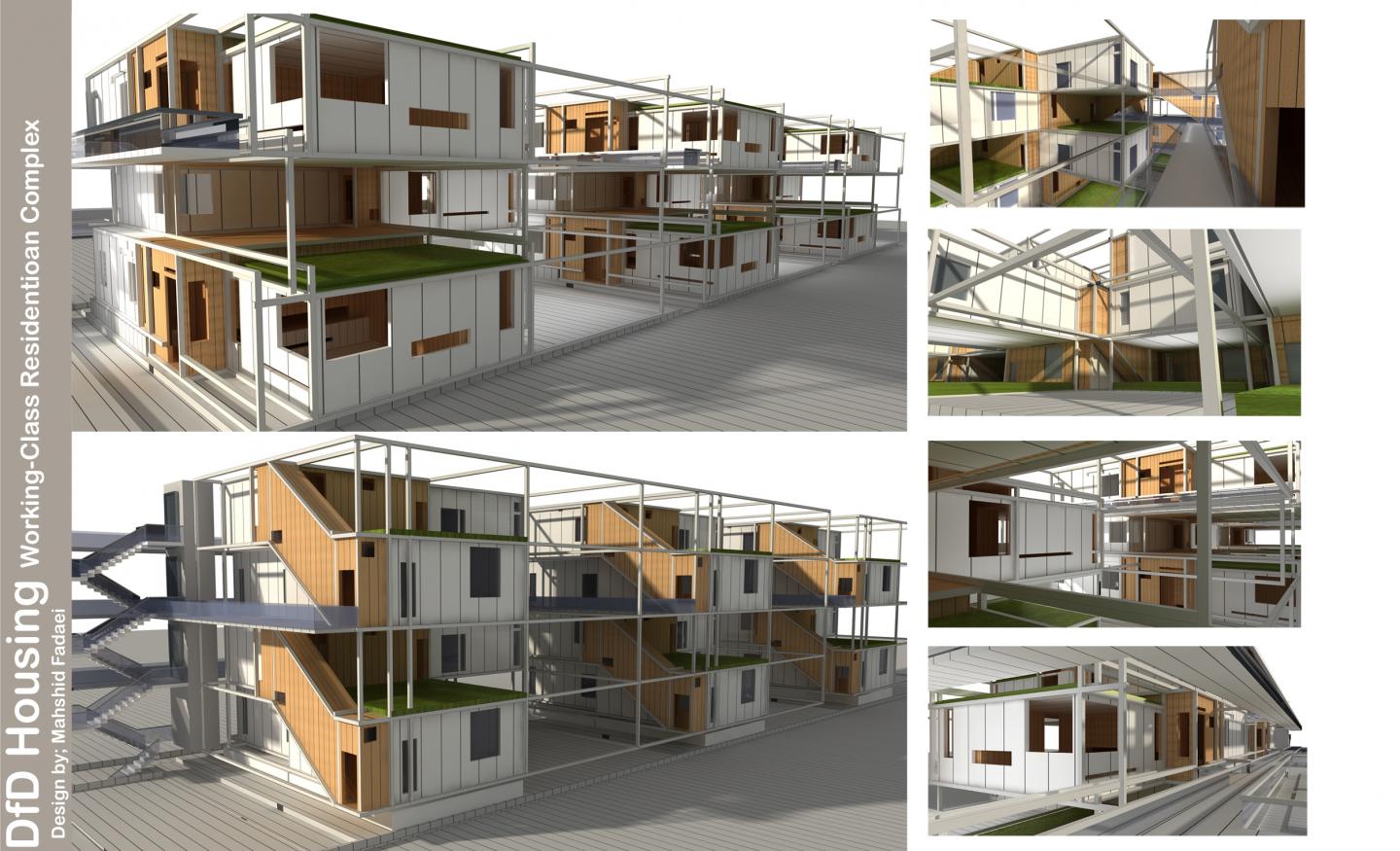 Design for Deconstruction Housing for Working-Class

Throughout the process of industrialization in developing-countries, organizational problems triggered by immigration of labor groups from rural distinct to cities located at the vicinity of industrial foundations. Cities affected adversely by environmental pollution, high density and overcrowded urban spaces as well as inconsistency appeared in social classes of citizens eventually culminate in inappropriate physical living condition in which any attempt to suite contemporary needs of low income working- class within providing constant interaction between living spaces and technological-scientifically achievements becomes inefficient. Improving the quality of working-class housing, regarding the constant changes of industrial era, dwells in competent strategies which are practical throughout design process. Indeed housing involves some exhaustive methodology which in conjunction with available technology provides houses with the chance of future adoption (development, subtraction and replacement or reuse and recycle of material) in whole building’s life cycle. In this project, revival of physical living condition of Shiraz oil refinery’s working-class body is projected. Required flexibility in order to establish gradual cooperation between working-class housing and technology in advances obtained with implementation of Design for Deconstruction principles as a flexible and sustainable building design method. The overarching goal of Design for Deconstruction (DfD) is to “increase resource and economic efficiency and reduce pollution impacts in the adaptation of and eventual removal of buildings, and to change or recover components and materials for reuse, re-manufacturing and recycling” (Guy 2002). DfD has roots in manufacturing borrowing from the fields of design for disassembly, reuse, remanufacturing, recycling and concurrent engineering (Kibert et al. 2002). Constructability analysis during building design simplifies the construction process, and this can be extended to address development, subtraction and deconstruction issues. Many constructability principles for simplifying the construction process can be used to simplify the process for building disassembly. Examples of relevant constructability principles include prefabrication, modularization, simplification of connections and building systems.

Area: 250000 M2
Population: 2300
One-Family House: 600 units
Council House:200 units
Design process challenged key principles of Design for Deconstruction defined as design for prefabrication, preassembly and modular construction, design for flexibility and adaptability, reduction of building complexity, simplification and separation of building systems, simplification and standardization of connection details, design to reusable materials and design to accommodate deconstruction logistic. Therefore, in this project: Living units planned in 3 main Prototypes standardized proportionally due to minimum requirements of living spaces. Also, In order to make prefab manufacturing efficient, units are modularized in prefabricated boxes which function as day, night, kitchen and central core spaces. All Boxes (Pods) connect one to another through a non-rigid plug and play system that provides the opportunity of replacement, adjustment and removal of each piece due to further design development or future project needs. However an exception applied to the Central Core housing MEP system that feeds up the boxes connected to it directly. Steel Structure with standard frames upholds prefab boxes. Spans extended to well-suite the proportion of different types of unit and flexible connections of structural elements allow to simple and safe replacement and removal. Boxes are Assembled on site to form the unit which by means of tower allocated one on top of another into structural frame in a way that vertically connected through central core. Reversely, further Disassembly is possible. Prefab Streets set on different levels prepared access to each house and are considered as basic axes form a 2 side composition consist of 12 to 18 one family houses. Compositions are distributed on site according to certain modular Distribution Pattern which arranged them based on providing units with maximum day light and air circulation via voids and open spaces.