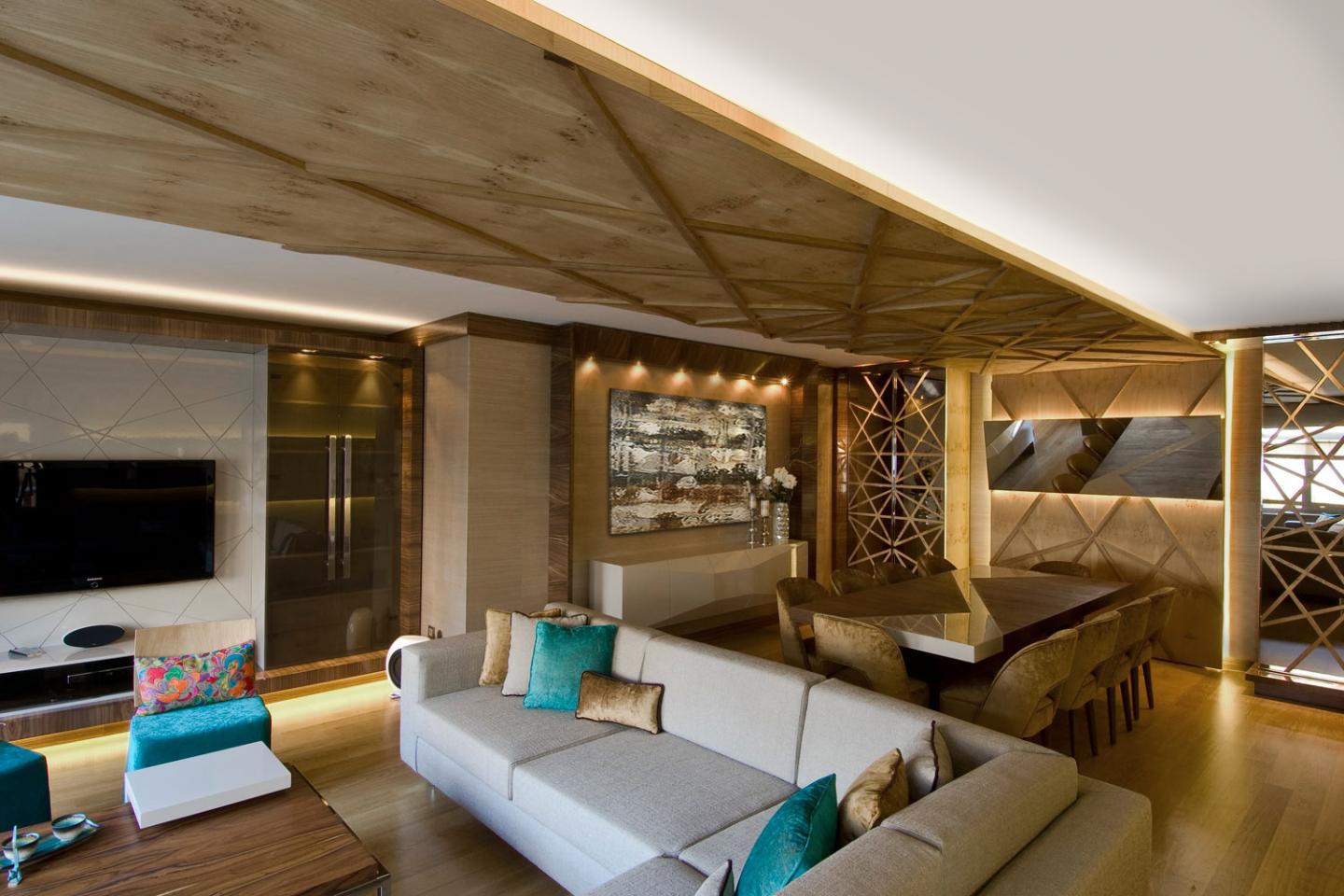 The Cekmekoy house located on a hill in Istanbul surrounded by forests has become a venue of peace for the householders thanks to the harmony caught with the transition of geometric and circular forms and the selection of materials by EDDA Architecture which is interior design contractor of the house and led by interior architect Eda Tahmaz.

The 200 square meters 4+1 house inside the Rapsodi Houses located on the most beautiful hill of Cekmekoy surrounded by forests offers the householders peace not only with the plant cover and the clean air of its location, but also with the elaborate landscaping and the nice sound of running water in the site. The determining factor for the householders to move here from their previous house has been the lower risk in a possible earthquake with lower rise buildings and the thinking that their children could grow up in a safe environment. And they decided to work with the Interior Architect Eda Tahmaz, who is a close friend of theirs, for the decoration of the flat. They have thus ended up with a decoration generally reflecting their own style.

The flat has been renewed completely in this decoration stage which lasted five months. In the decoration project shaped by the wishes and needs of the householder, the existing laminate flooring was replaced with massive flooring. Stones were used in the flooring of wet areas such as the entrance, the bathroom and the kitchen. Room has been made for the washing machine and the dishwasher inside the large cupboards of the kitchen furniture which stands out as different from the other furniture in the house with its lacquer surfaces. So there has not been any need to spare space for such devices in the bathrooms. The functionality of the kitchen has increased and space was won in the bathrooms and the restrooms.

A harmonious effect was created with smooth transition of tones in the living room just after the large entrance of the flat entered from the beginning of the corridor reaching to the rooms. Eda Tahmaz has worked in interactions with the TV music system while designing the furniture and wanted the user to feel the vibrations of the cinema effect in the sitting group.

Glass has been used in the doors of the rooms, some of which are sliding doors, so that the light is continuous between different areas. Eda Tahmaz has preferred to use different materials, textures and colors together both in the furniture and flooring, on the walls up to the ceiling such as oak, walnut, lacquer, mirror and metal, and she has succeeded in catching the harmony resulting from diversity. The interior architect who loves to use geometric and circular forms in decoration projects continued to use these details also in the rooms lining up along the corridor letting the requests of the householder guide her. Tahmaz cared about using natural light and she has given the rooms new dimensions with the light effects, which she has used in the custom made wall and ceiling panels, diversifying the shade and light values of the volumes at different hours of the day.