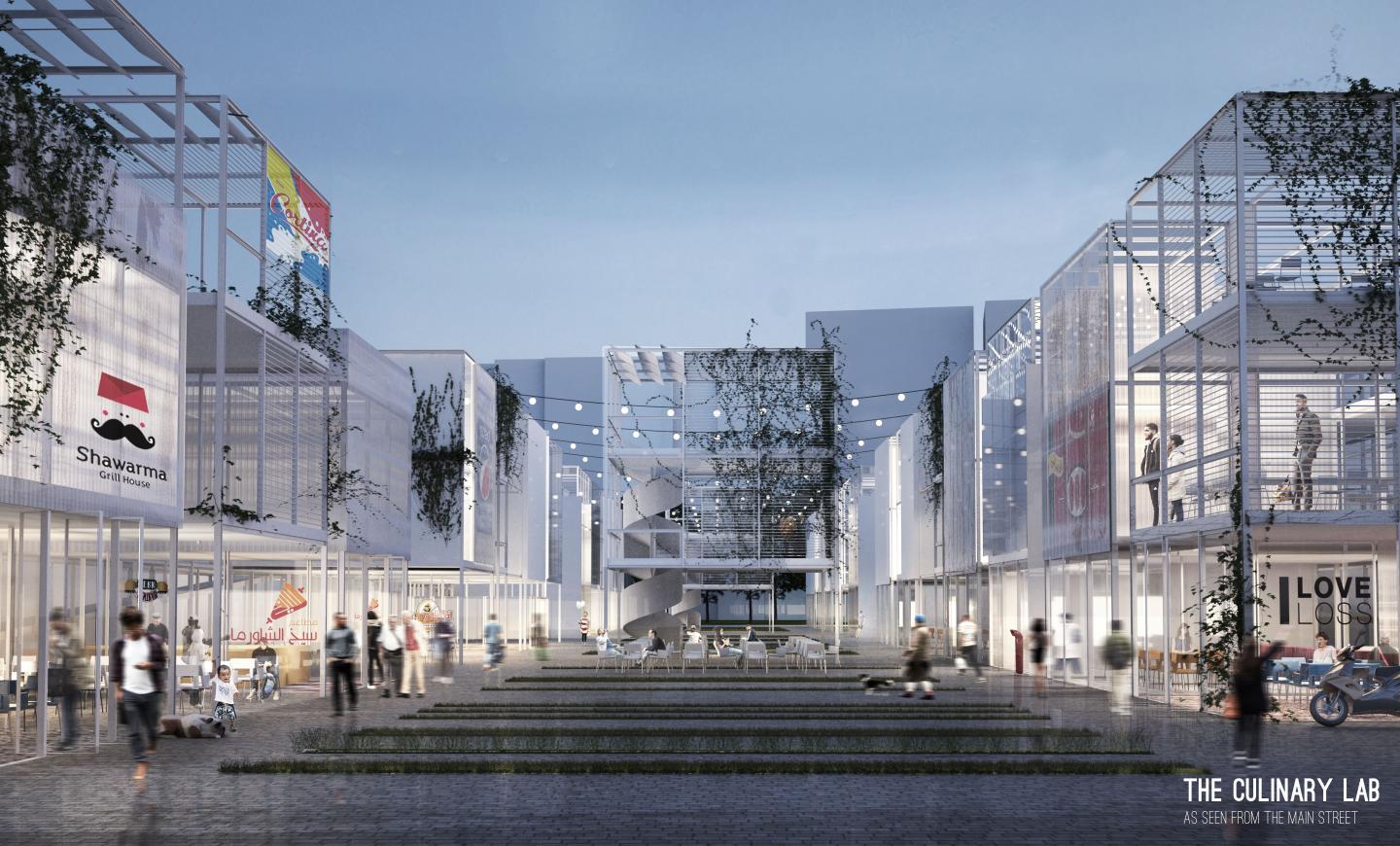 The Network: An Urban Model for Socioeconomically Resilient Industrial Ghettos

It all started in the late 1700s. The industrial revolution changed the face of mankind as we knew it. Although advancing humanity beyond what was thought possible, the revolution had grave humanitarian consequences. Child labor and horrible working conditions along with mass migrations from the rural to the urban realms caused the formation of industrial ghettos around industrial sites. Facing the challenges brought by the revolution, different urban approaches were adopted, two of which exemplify the diagonally opposing intentions behind them: BAR VS. BATA

BAR:
Isolationist approaches were the most prominent in application - Isolating industrial laborers in their urban “islands” and cutting them off from the rest of the city. But as seen in the Pruitt-igoe project in Saint Louis, for example, the model exacerbated the situation and simply failed.

BATA:
Tomas Bata of the Bata shoe company founds what was known as “Bata-villes”. They represented the concretization of Batas socially-conscious, labor-friendly, progressive, and “welfare capitalist” ideals. The Bata-villes were industrial colonies divided into zones that included factory buildings and warehouses, public and civic spaces, and high-quality housing in lush green spaces for the laborers. The Bata model bought the laborers’ absolute loyalty to the firm and its founder, helping the company resiliently survive and even flourish during the great depression – the period between the two world wars characterized by great financial crises.

THE PROJECT: THE NETWORK

However successful the Bata model was at the time, its self-sufficient and central nature renders it inefficient in dealing with external factors and inapplicable to existing industrial ghettos - as it is. The network is a universal model that builds upon the failure of isolationism and the relative success of the Bata trilogy (the home, the workplace, the public backbone) – it is the Bata model in evolution.
The network is mainly established with the identification of the points of existing socioeconomic potential, horizontally connecting them to points of the same layers, and then vertically overlapping different layers (workplace, home, and public) to establish programmatic and socioeconomic continuum, interdependence, and the resilience of the entire system.

A Prototype: The Industrial Area of Bouchrieh-Dekwaneh
The area is a typical example of an industrial ghetto “swallowed” by the development of the city. Starting off as a clustering of agricultural fields, the area was later classified as an industrial area beyond the limits of Beirut.
Following the expansion of the capital, the industrial area was engulfed by it. With most industrial laborers living well within its limits in crumbling homes and unsanitary conditions and the absence of any links to the rest of the city, the area soon became isolated and stigmatized.

Residential Layer: The derelict “housing” units are removed from within the boundaries of the industrial site. The laborers are integrated within the existing residential fabric in order to avoid clustering and strengthening of the current “ghetto” status.
The Workplace: The industrial sectors are opened to their surroundings through their overlapping with the public backbone.
The Public Backbone: the different layers of the existing public backbone are identified, connected within their layer, and overlapped with each other along with the residential and workplace areas to form the network.
Among the several nodes proposed for The Network, the following are further developed:

Node 1: The Souk
Situated at the far extremity of the industrial area, the souk links it to the residential neighborhood through the mundane daily activity of food and grocery shopping. It’s an act of rehabilitation of existing and derelict garage strips. It includes permanent units and temporary modulable market stalls for short-term use.

Node 2: The Bridge
Situated at a proximity of the international highway, the bridge physically and programmatically links the industrial zone to Bourj Hammoud - an area known for its highly skilled craftsmen. It presents an openly accessible (pedestrian) elevated street passing through the building that houses conference halls and seminar spaces for craftsmen - industrialist - artists - designer cooperation. The bridge ends on a platform accommodating different forms of public activities.

Node 3: The Culinary Lab
At the heart of an industrial cluster between two factories, the culinary lab is an experimentation ground offering small-scale modulable restaurants (6x6 modules) for culinary hobbyists and students of the nearby culinary academy. Its strategic location within an industrial cluster and its proximity to the residential area allows the "lab" to act as an active street – an open-air food court linking residents-students-visitors-laborers and hobbyists.

Node 4: The Microcosm
By definition an encapsulation in miniature of the characteristics of something much larger, the microcosm is a tribute to the industrial zone - a museum of industrial senses and innovation.
At first glance, and just like the city itself, the solid skin of the microcosm shows nothing but subtle hints of the treasures it hides inside. Inside the shell is where the story begins - a story told in two overlapping chapters: A Material World, and the Silos. Unlike the functional separation usually present in museums where temporary and permanent exhibitions are totally independent entities, the microcosm adopts a delicate overlapping of functions/chapters (mirroring the urban strategy adopted).

Introduction:
The visitor is greeted at the ground floor with public functions (library-restaurant-boutique...)

Chapter 1 - A Material World:
"Each material has its own message, and to the creative artist, its own song" - Frank Lloyd Wright.
A gallery of industrial senses - the permanent exhibition. An amplified sensory experience of the daily atmospheres, feelings, textures, patterns, sounds and smells of the industrial zone. It is where the alphabet of the area’s production (metal, wood, fabric, and glass) isn’t uniquely exposed, the material is the space.

Chapter 2 - The Silos:
Guarantee the overlapping of chapters – holding The technological, the logical, and the mechanical. They’re an extension to the temporary exhibition of industrial innovation. With a series of mobile and modulable platforms, the silos change in layout and expression. They represent the adaptive industrial city.

Conclusion:
The visit is concluded in the observatory where the microcosm (the museum) is visually linked to the macrocosm (industrial zone) it represents.