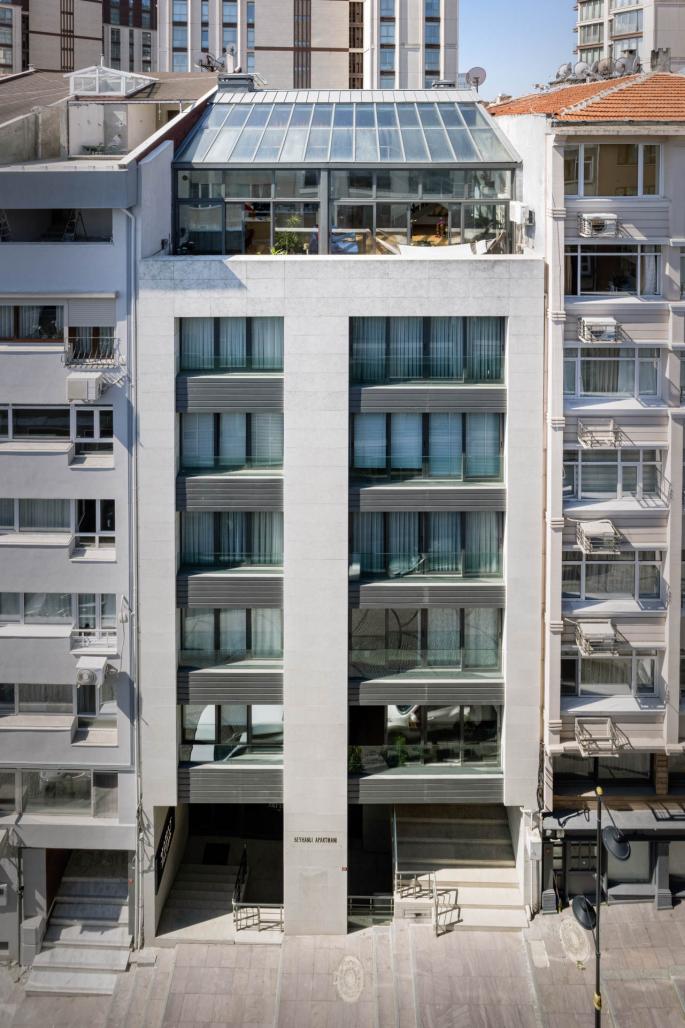 Seyhanlı Apartment located on Hüsrev Gerede Street in Nişantaşı, Istanbul is an adjacent building project refurbished within the scope of urban renewal. The building has 16 independent units, a floor space of 286 square meters and an area of usage of 2,241 square meters. 14 of the independent units are used as residencies and two of them are used for commercial purposes. Semi-basement floors of buildings, especially their inclined sections, on the sloping Hüsrev Gerede Street are perceived as basements. During the refurbishment of this building, the semi-basement and ground floor was pulled back in by two meters and the basement floor perception was blotted out. Likewise, pulling back in 70 centimeters of the building façade on two floors looking towards the back street was enough to do away with the basement effect there. These floors were also fitted with large windows for more daylight.

In the adjacent building style widely used in the area, there are two flats on each floor, one facing Hüsrev Gerede Street and the other facing the back street. In this style the long depth problem of floor spaces is resolved using long hallways and dark “light wells” which are not convenient and cause loss of usable space. The rear of the buildings in the area, particularly where Seyhanlı Apartment is located, looks toward a lovely street and upper floors even have a panoramic view of the sea. Initially two alternatives were presented to the employer as solutions to the long depth problem. First, the conventional double-faced flats were having long hallways. In this solution, space loss was tried to be reduced by combining the light well with the stairwell.

In the second, which was preferred, two flats were placed on each floor, each one facing one side of the building. A light well was created in the stairwell. While it was used as an air shaft for ventilation, it also allowed even the ground floor flat to receive daylight from above. Thus, in terms of ventilation the flats perform like double-faced flats, and there are no space losses and unlit areas anymore. As a result, two flats of 120 square meters were obtained on each level of the building having a floor space of 286 square meters. Through examination of the inhabitant profiles in this region, kitchens were converted into kitchenettes. And considering the importance of wardrobe areas in residential solutions, each flat was furnished with built-in wardrobes of 12 linear meters. Finally, a central dust extraction system was built to fight urban diseases, especially allergies.