Traces of the Identity

Multicultural Identity or Extreme Nationalism?
Today, we know that there are communities that include various kinds of ethnic origins. However, these communities are not able to achieve their potential of being a productive and critical society because of the inability of minorities to integrate properly into society and the policies carried out by the government. Moreover, they cannot follow the concept of a culture ever-evolving and dynamic. In the 1990s, some political parties' policies aimed at preserving western culture started to get stronger after the historical process of integration problems due to worker migrations in the 1950s and 60s. It is thought that the integration of existing ethnic groups will take decades due to the policies implemented (K. van der Veer,2003). The question is "In the circumstances, are we moving towards dynamic and developing multicultural societies with high potentials or strict hypernationalist societies where border walls are rising ever more? ".

Mardin
In the architectural scenario, to understand the existence, the sustainability, and the potential of multicultural societies; the society takes action to take a stand against the idea of multiculturalism to be marginalized and organizations that leads to the extreme nationalism. People choose Mardin for Turkey as the main research point to understand these values. People start to trace the multicultural identity of Mardin which has been hosting different ethnic origins and languages for centuries. They use the "data" which is the new tool of sociological and historical research to comprehend this multi-layered site and to be able to analyze the interaction of societies with each other. This community will produce a call to the society of the future with these researches.

Dynamic Tracing
Today, methods such as ''Distant Reading'' and ''Cultural Analytics'', which are used in sociological and historical research, enable us to establish relationships between multiple data sets. Accordingly, it increases the diversity of research by producing new traces between researches. It is very important that the data buried in the people of Mardin are a part of the researches because the data sources we have can not be enough to understand that multi-layered society. In this place, people are the catalyst actors of the research process. Depending on the method used, a research output may produce a new trace or link to another research, which changes the traditional linear research process and brings with it a completely different type of research and the questioning of its own architectural space. Accordingly, spatial accents that change depending on the light and a dynamic tracing circulation have been created in order for the spaces and research processes to be intertwined.

Change of the traces through layers
The form of illumination, which differs in each layer, offers an experience that changes between floors. This connects the different steps of the research.

Change of traces during the day
The change in the form of illumination found in each layer during the day creates constantly different trends, so that researches and spaces are intertwined.

Site Seleciton
For the research process, the project should take people from different ethnic groups inside. According to that, the site selection was made by considering three subjects. First one is the general social density. The second one is the dated structures which give us idea about the historical stratification. Third one is religous buildings which give us idea about the ethnic diversity.

The angles in the project were determined according to the light analysis.
Area: 10,000 square meters
Location: Mardin/Turkey

Traces of the Identity by Hamza Mucahit Unlu in Turkey won the WA Award Cycle 41. Please find below the WA Award poster for this project. 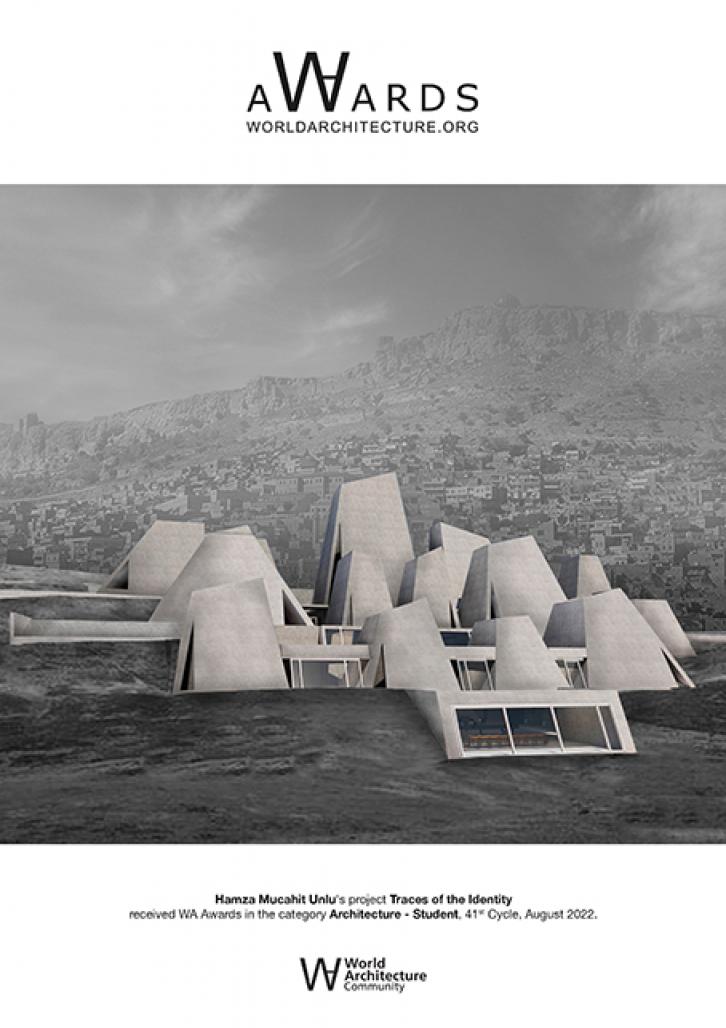