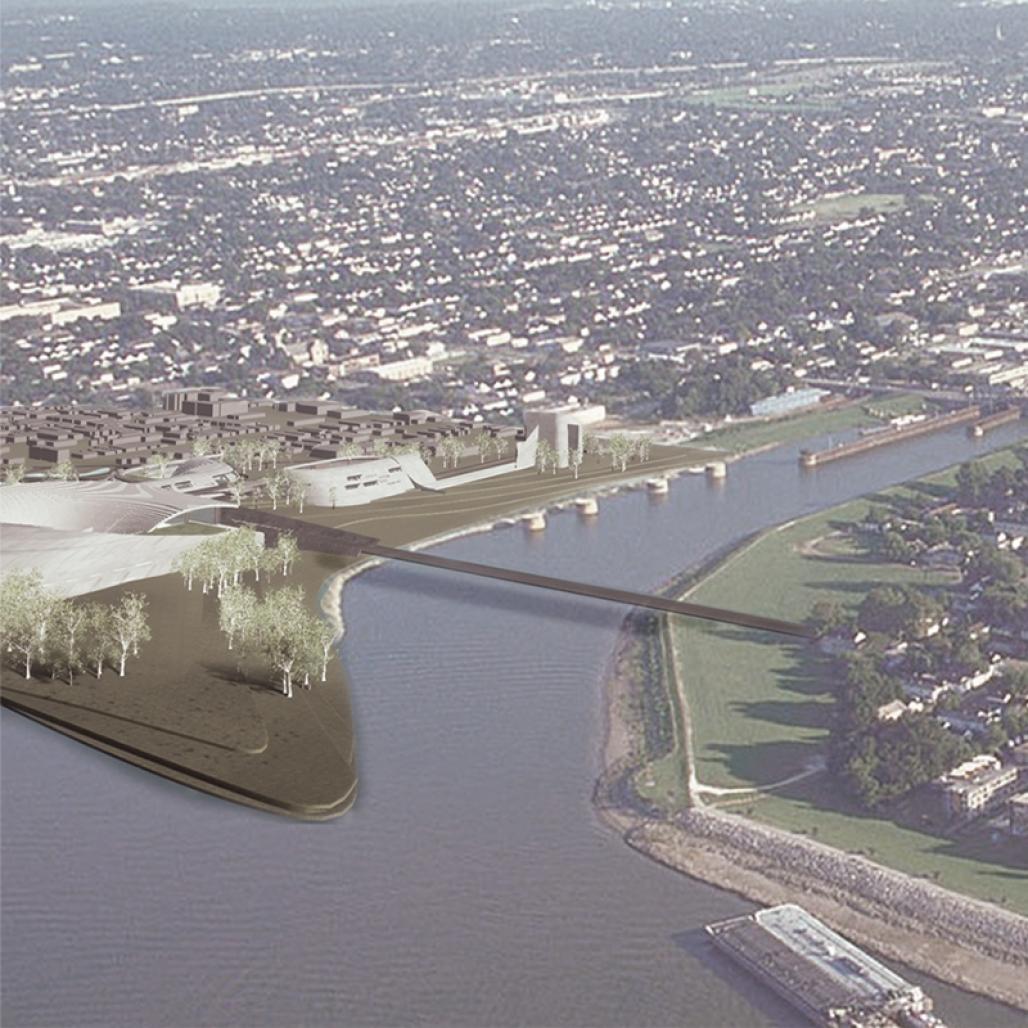 This project focuses on New Orleans’s flooding problem. Due to its topography and ineffective flood protection systems, New Orleans has been dealing with natural disasters ever since its foundation. To improve the existing condition, this project proposes a landscape strategy and a building complex. The design solutions are produced according to three concepts: preparation, action and recovery.

Despite the economic advantages, settling between the two bodies of water created some disadvantages. New Orleans had always been dealing with floods because of its ‘bowl-shaped’ topographic properties, ineffective flood protection and drainage systems.

The last and most recent natural disaster New Orleans experienced was in 2005, Hurricane Katrina. The hurricane and the following flood damaged the majority of the city.
One of the main reasons that the disaster resulted in huge damage and such chaos was the lack of proper planning and operational decisions.

One of the neighborhoods that took the most damage after the hurricane was the Ninth Ward. Ninth Ward became a part of the city in 1852. Because of the higher rents and expensive living costs in the city center, people of color and immigrants moved east and created the Ninth Ward district.

Today, the district is divided into two, Upper Ninth Ward and Lower Ninth Ward, by the Industrial Canal. At the beginning of the 20th Century, a canal connecting Lake Pontchartrain and the Mississippi River was proposed. This canal creates direct access from the lake and river to the Gulf of Mexico. The idea was seen as an economic investment, developing the industrial area and increasing the ship traffic but on contraries, it created environmental, economic and social problems in the area.

Dividing the Ninth Ward district, already a neglected neighborhood, made the area much more isolated. The neighborhood was not only divided physically but also separated socially and economically as well. Upper Ninth Ward has slightly developed over the years but the Lower- Ninth Ward is still occupied by low-income families.
Connecting the river to the lake, to the Gulf, created saltwater intrusion, which killed off the cypress forests, some of the best natural defense systems against flooding. The canal increased the flood risk of the Lower-Ninth Ward. The Katrina storm surge came up through the intercostal waterways and into the city and down the Industrial Canal. The collapse of the floodwall left the Lower-Ninth Ward underwater.

The chosen site for the project is the site of an old defense complex. Edward Hebert Defense Complex, known as the U.S. Army Supply Base New Orleans, was a military support depot established in 1919.

After Hurricane Katrine, in 2005, the building was sold to New Orleans Government. The building cannot be reused because of the damage it took during and after the hurricane and flood. The complex remains idle today.

The site is at the end of the industrial canal on the Upper-Ninth Ward. Because it used to be a military base, the site is more elevated and has the lowest flood risk in the Ninth Ward neighborhood. There is an old railway connection, connecting the Ninth Ward to the city center, which is not in use today.

The location, topographical advantages, and transportation connections make the site suitable for a complex which socially connects the neighborhoods and offers communal activities and also becomes a shelter and an operational base in case of another disaster.

Sponge City: Existing urban areas often have to deal with flooding caused by heavy rain, high tides or swollen rivers. Sponge city is designed to mitigate or prevent such events by providing the area with the ability to naturally absorb the water.

The Building Complex
In the described site plan, a disaster preparation and recovery center is proposed. This complex acts as a landmark, creates social connections by physically and socially connecting neighborhoods, and acts as a shelter and an operational base in case of an emergency.

The neighborhoods are connected physically by a new pedestrian and cycling bridge. The bridge connects with the main circulation axis. The axis connects three main buildings.

The transportation hub consists of the re-activated railroad, a dock and a bus station. The hub is not only important for daily interactions but also for a disaster scenarios. The railroad and the dock are used to connect with the city center and a number of busses are stored to rapidly excess to the flooded areas and transport the people to the complex, where they can take shelter or get first aid care.

The mass communal areas, like the gymnasium in the sports center or the auditorium in the education center, are used to shelter a large number of people in a disaster scenario.

The landscaping and canals create controlled water rise and decrease the water pressure. It also creates a green area for citizens to socialize.