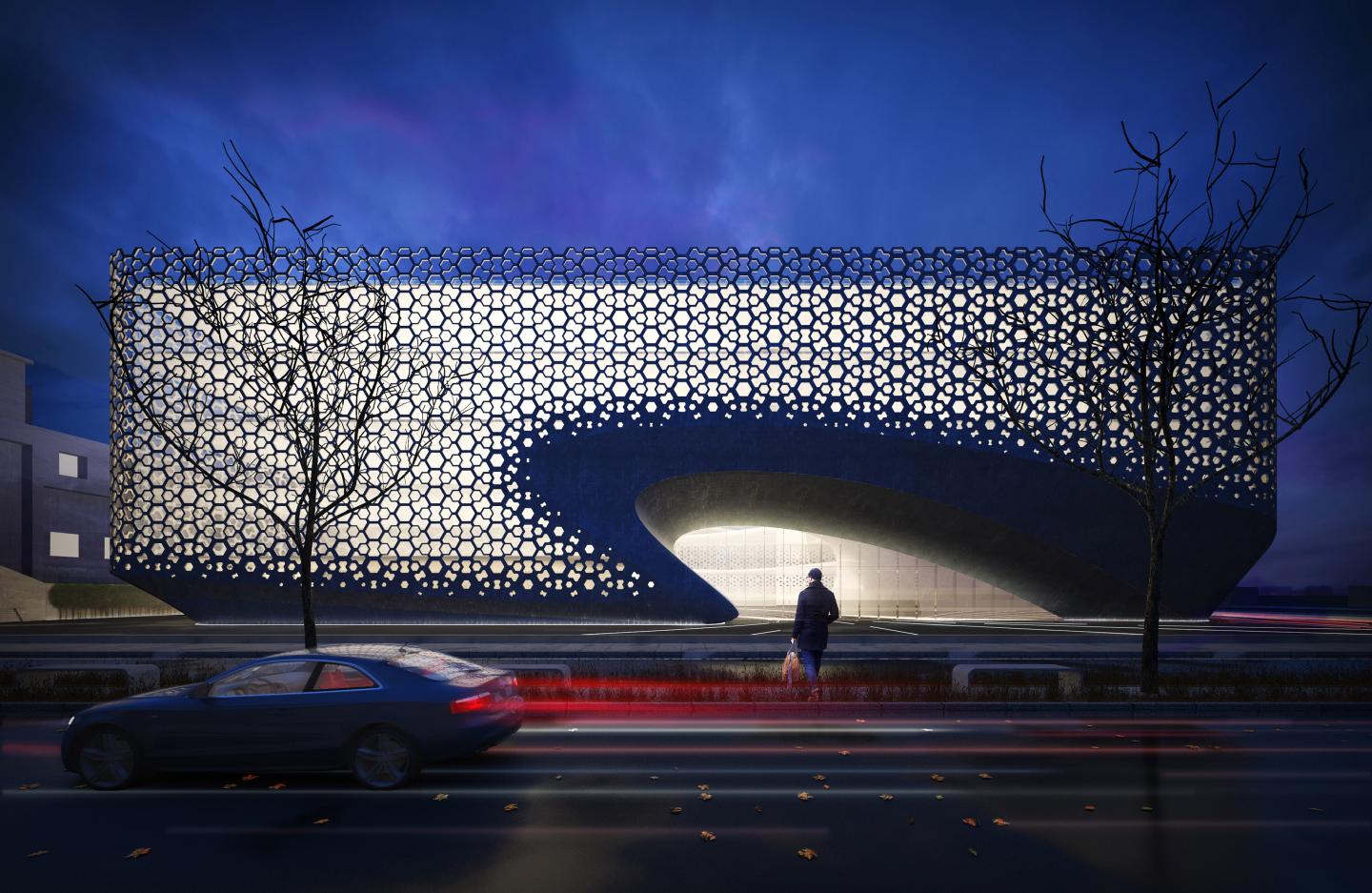 Punjab Kesari Headquarters is designed as Fusion of traditional Indian architecture and contemporary office space, the main objective is to reduce heat gain and optimize façade opening ratio, ensuring no artificial lighting is required on a typical day. An animated façade is designed as an outcome of different façade opening ratio depending on the orientation.
The inspiration was to translate a traditional Indian façade pattern by using digital simulations into an iterative processes to create a responsive built form. This traditional Jali screen creates culturally a sense of belonging. Lux level of 500 has been achieved in the building at a workstation height from each floor plate, along with a daylight factor of 2 over 80percent of the floor plate. This is done to ensure that artificial lighting is not required inside the building on a normal day.
A hexagonal pattern was used as a base and through iterative process various porosity patterns were generated from it to create different light conditions. This resulted in a variable opacity condition in the facade that had a dual purpose of creating performative architecture and also created variable openings on the facade in various orientations generating a design for the facade that is animating and has an inherent meaning. This resulting pattern morphs from 81percent opacity on the north facade to 27percent opacity on the south facade, with an intermediate opacity of 54percent on East and 62percent on west facade respectively.
The Jali facade is made of Glass Reinforced Concrete panels. In terms of construction tolerances a system has been adopted whereby through cnc milling, a mould will be created for the facade pattern and this mould will be used for casting the facade panels. The curvature of the entrance will be also casted using this process whereby by using digital fabrication of mould a higher accuracy in the design is achieved.
Sustainability is at the epicentre of the project embedded in form of, optimized natural lighting, cross ventilation and reduction of heat gain. The double Jali screen reduces the outside air temperature in front of the glass. The colder air is going in and pulled into the atrium through the chimney effect of the atrium space and resulting in natural ventilation and reducing the indoor air temperature naturally so the cooling load for the air conditioning is reduced.

Located at an urban corner in Delhi NCR the project looks at integrating with the surroundings with two bold gestures. A sense of invitation with an urban lobby is created whereby the landscape flows inside the building creating seamless movement trajectories extending into the central atrium space.
The project design was commissioned in 2014 and went into construction in August 2015. The opening date for the project is January 2017.

Being an office space the building is seen as an interaction zone by creating moments allowing informal interaction. A central atrium connects the various floors creating a diffused boundary condition and a visual porosity between people working on different floors. Since the design looks at no artificial lighting it makes the user feel closer to nature and allow to work in natural lighting. The office floors are dividable into smaller units to achieve flexible units ranging from 500 to 2000sqm.

The project site area is 5220 sqm with plot dimension of 87m x 60 m. The allowed coverage was 50percent out of which only 43percent was utilized to fulfil the fire safety rules. The outlook for the client was to create a flexible model whereby they occupy one floor and rent out the rest as office modules of 500 sqm each. Located in a commercial/ industrial zone the total built up area is 13,000 sqm with a height restriction of 23 meters. The building dimensions are 70m x 41m x 21m.
Located in Delhi NCR, India, the project design was commissioned in 2014 and went into construction in August 2015. The opening date for the project is January 2017. Currently first floor slab is being casted. Punjab Kesari headquarters won the International property award for best office Architecture India 2016-17. It was presented at Tedx talk in Bremen, Germany in 2015 by Britta Knobel Gupta as a part of the talk Performative Aesthetics and at Smart Geometry Hong Kong 2014.

Punjab Kesari Headquarters by Studio Symbiosis in India won the WA Award Cycle 23. Please find below the WA Award poster for this project. 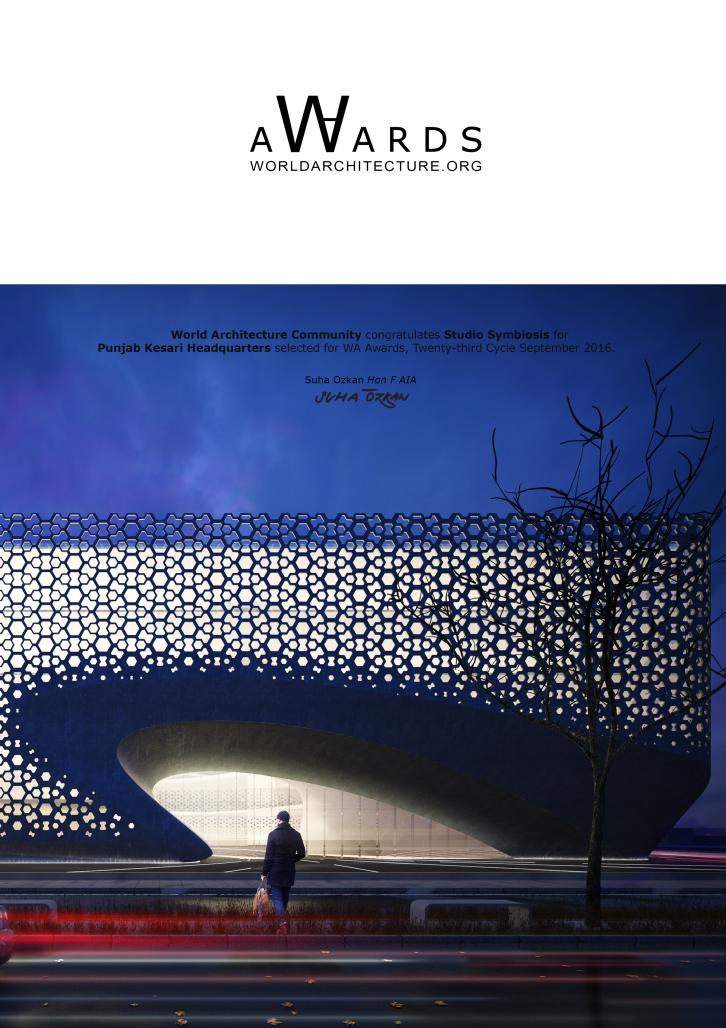