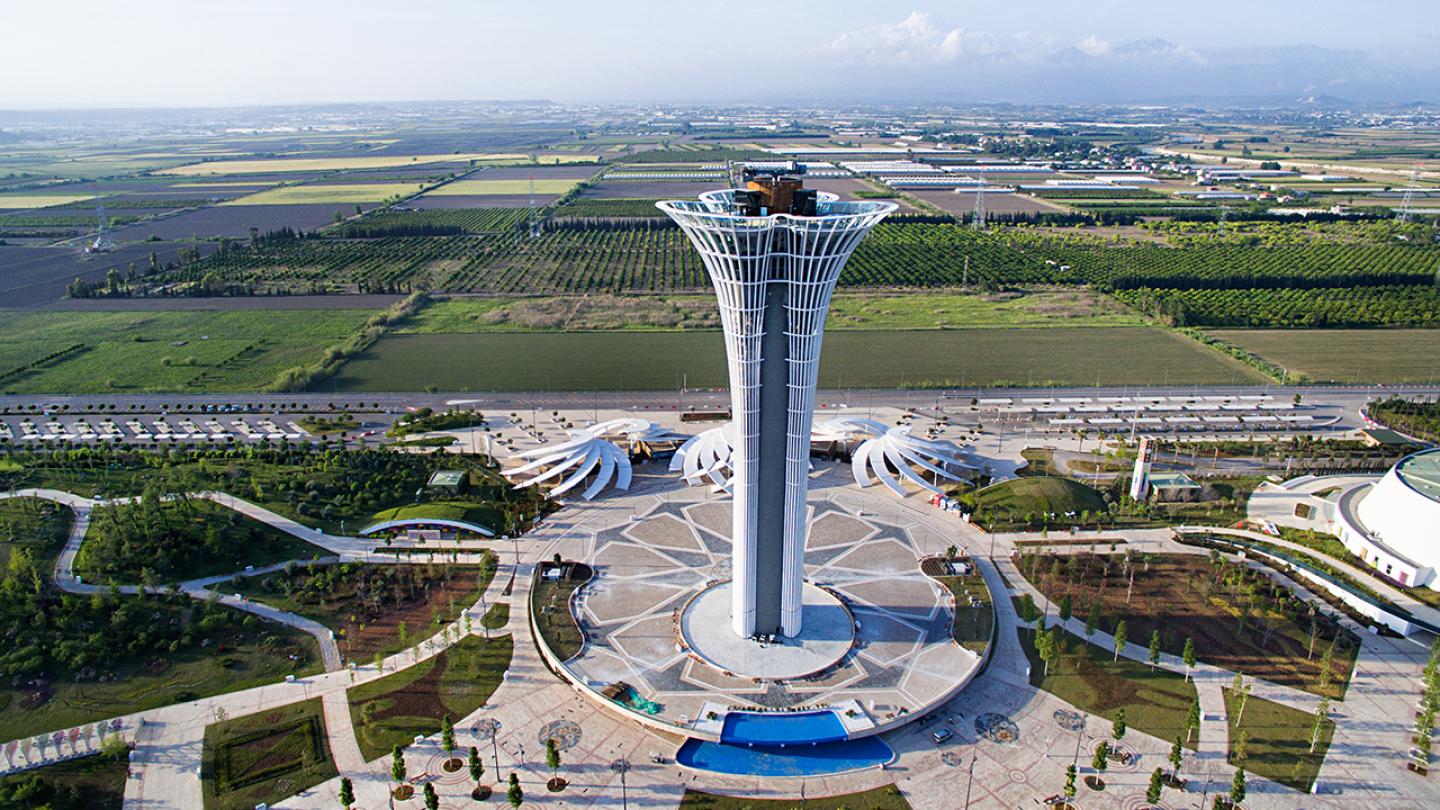 Major structure of the iconic tower was focused on representing EXPO 2016 and a design to symbolize Antalya.

ANTALYA
At the heart of Mediterranean, Antalya carries the trace of ancient history surrounded with a splendid natural beauty. With a prospective climatic state and an average temperature of 35°C and 300 day a year being sunshine, Antalya becomes one of the vibrant touristic city in the world.

EXPO 2016 ANTALYA
Focused on botanic, EXPO 2016 Antalya along with the motto “A green life for future generation” adopted the theme as “Flowers and Children”. Along with its motto and the theme a master plan layout was drawn on an area of 1,100,000 m² (110 h). According to the functional layout the location was seeking for an iconic Tower to represent the event. An architecture competition was opened to design the tower.

IDEA
Initial idea was focused on a symbolic tower to represent the theme “Flower and Children” and to merge with the given master plan for the event. And a goal was set to reveal the traces of Antalya with strong yet modest lines.
PROGRAM
The tower features a circular view deck with a 360° view giving a splendid vista of EXPO site and the beauty of Antalya floods on the background. Placed on 101m above ground level the deck allocates indoor and outdoor spaces for the visitors by allocating a space of 1500 m².
CIRCULATION
Three vertical circulation placed on equal distance carries the major function of panoramic elevator, fire exit and a service elevator.
FORM FOLLOWS FUNCTION
Three major circulations merges with three open petals enclosing viewer deck at the peak, indicates the well-known Hadrian’s gate in Antalya.
SYMBOL OF THE CITY
Major structure of the iconic tower was focused on representing EXPO 2016 and to design to symbolize Antalya.

SOLAR HEAT PROTECTION
The convex formation on the upper level facade controls vertical forceful sun rays and works as a sunshade
PERFORATED ALUMINIUM FAÇADE
Perforated grids controls sunlight penetration into the façade.
OPEN AND CLOSED VIEW DECKS
View deck usage was focused on various season and weather conditions. The tower opens a wide open deck on +101.40 level, while forming an open roof top view deck with a splendid vista. The spaces deep volume spaces below roof top, are brighten with the openings brought up on the view deck floor. The Aluminium structure forms the façade skin and controls day light into the space.