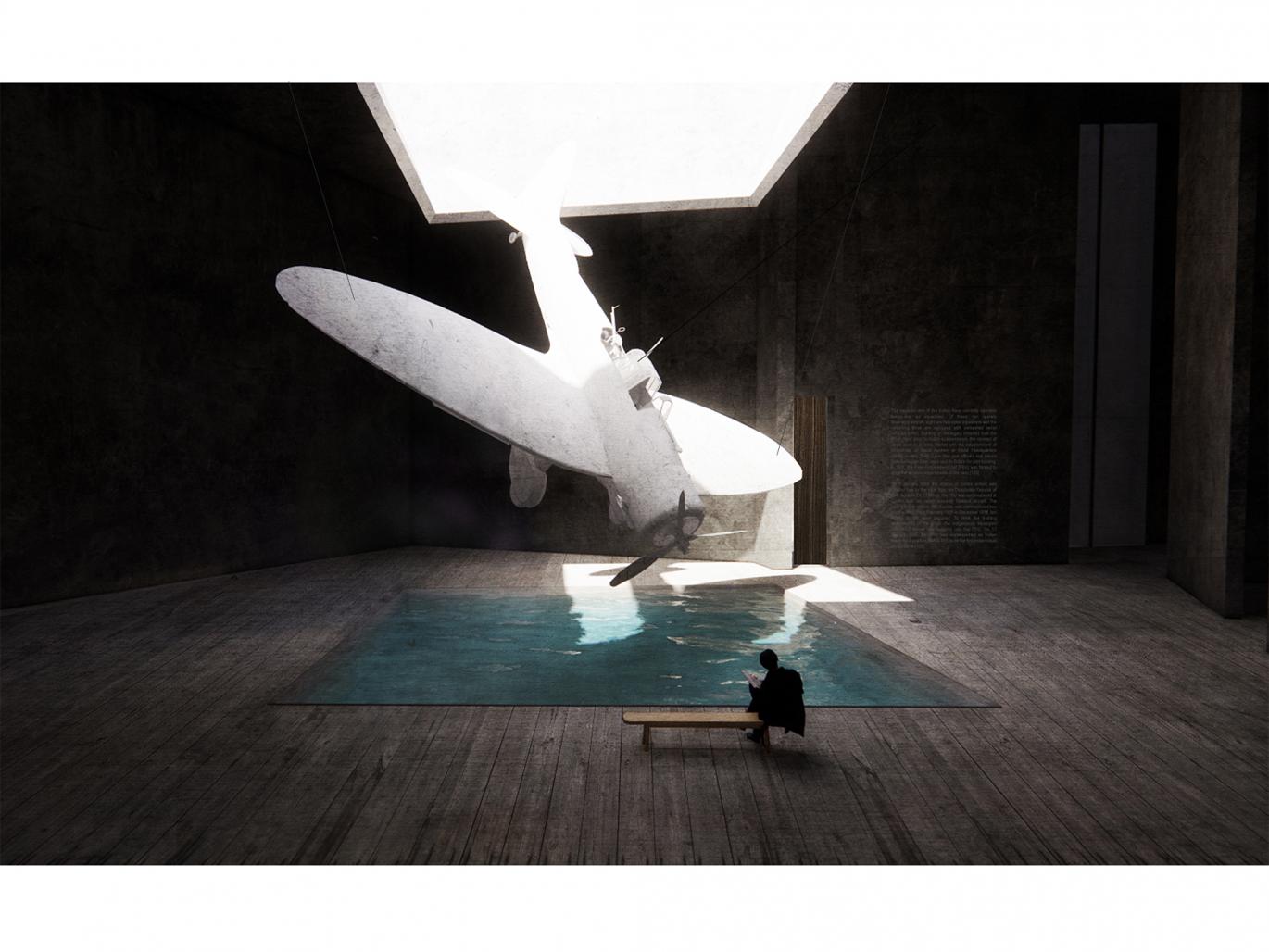 1. Abstract:
Numerous museums have been erected but only a few revive the cultural aspect in society, bring back lost emotions, and give an identity to the place. In other words, very few museums are able to act as urban catalysts. This thesis aims to design a National War and Military Museum to portray the Indian war and military culture, customs, traditions, and history.
The objective is to design a museum that acts as a permeable contact zone between military and civilians. Also, to create an iconic building that leaves an impact on the visitor and, at the same time, extends the nationalistic emotions to the society inspiring the young generation. The approach is made by studying museums on mainly three aspects; museums as an urban catalyst, thematic spaces in the Indian context, and functionality of a military museum, in addition to understanding the complexity of public engagement and exhibit representations.
The results substantiate the need for flexibility in museum spaces to deal with rapidly changing visitor dynamics and collections. Also, the focus is laid on experience rather than quantitative data so that the museum itself can be viewed as an artifact, other than being a building that houses artifacts.

2. Site:
The site is in the capital of India, New Delhi. (North of India Gate) The surrounding local architecture follows the Indo-Saracenic (Indo-Gothic).

3. Spatial organization:
The spatial organization of the museum is a juxtaposition of cuboidal volumes (25m X 25m). This creates the triangular space between them which has been as used "Nukkad" to portray a story by inscriptions and sculptures. All these volumes are arranged by following the axial connections of Old Delhi with New Delhi and their parallel alignments. The main central block is aligned in the axis which connects Red Fort with India gate. The overall complex does not surpass the scale of India Gate, a national monument.
The museum is zoned in two levels which are divided by a central atrium and all spaces are arranged in a 3-dimensional configuration. The upper level contains the Armed forces gallery and the lower level has the war galleries.
Hall of memory: Designing emptiness. Except for all other spaces, the roof of Hall of memory is inclined and space is filled only with the light. The terrace of the auditorium gives a direct visual sight of India Gate.

4. Thought:
Thematic spaces + In-between spaces:
The concept of Indian architectural spaces can be narrowed down into three prime elements- terraces, courtyards, and pavilions.
These spaces are thematic spaces. These are defined as those elemental spaces (courtyards, terraces, and pavilions) which run across the building either in facade or building’s layout. They retain the continuity and scale of the whole structure.
All these elements are translated into different other large spaces. They support the cultural needs and climatic needs, especially during summers. The can act as a space within themselves or transitions spaces such as Ghats and step-wells thus acting as in-between spaces too. The community interactions, social meets-functions, breathing space within a built environment, playing area are few variants of the uses of these spaces.
In-between spaces-These spaces are physical space which refers to a physical change by separating two distinct areas that have different spatial qualities. It is a connection between inside and outside; in and out; water and land (step-wells).

1. Site area: 6.33 acres: 25638 sq.m
2. Site Land use: Social-Cultural facilities (According to DDA Master plan 2021)
3. Broad requirements:
War galleries, Armed forces galleries (Flexible + Permanent spaces), Hall of Memory, Temporary exhibition space, Workshop, Auditorium, Library, OAT, Cafe+Restaurants, Museum shop
4. Space percentage allocated
a. Exhibit Galleries – 55%
b. Administration + Management – 5%
c. Other Public Facilities (Auditorium, Cafeteria, Library, etc) – 20%
d. Utilities – 20%
5. Areas
a. Total built-up: 3.51 acres: 14230 sq.m
a.1: Lower ground floor: 6369.31 sq.m
a.2: Groud floor: 7587.39 sq.m + 271.2 sq.m(Audi upper deck)
b. Ground coverage: 34% : 8716.32
c. FAR: 0.50
d. Height: 15m
e. Parking: 360 ECS - two basements
6. Architecture: Construction + Materialism
Following the post-war architecture, postmodernism, the structure is made of reinforced black concrete, steel, and wood. Black concrete or the pigmentation is done for the aesthetics. Functionally it works similarly to the conventional concrete. Due to pigmentation, there is a 1% increase in water absorption capacity, a 20% increase in compressive strength. There might be a reduction in bulk density.
Warren truss + green roof:
The roof of the museum is a composite; a green roof and an industrial roof. This allows the roof to carry the weight of the hanging aircraft and objects through the grip-lock system.
Facade:
For the facade, the cladding has been done with the panels made out of papercrete (and experimental material: a mixture of paper and concrete). The panels are 1200 x 800 mm. They are light in weight and add raw concrete texture to the exteriors. The facade is monolithic with fewer openings to the street.
Light + Ventilation:
Maximum diffused natural light has been invited through roofs and glazing in East and Northside, Blocking south-sun completely. The opening is created in West and East direction to invite cross ventilation and creating wind tunnel for monsoon winds of Yamuna river.

National War and Military Museum, Delhi by Yagvinder Mamoria in India won the WA Award Cycle 35. Please find below the WA Award poster for this project. 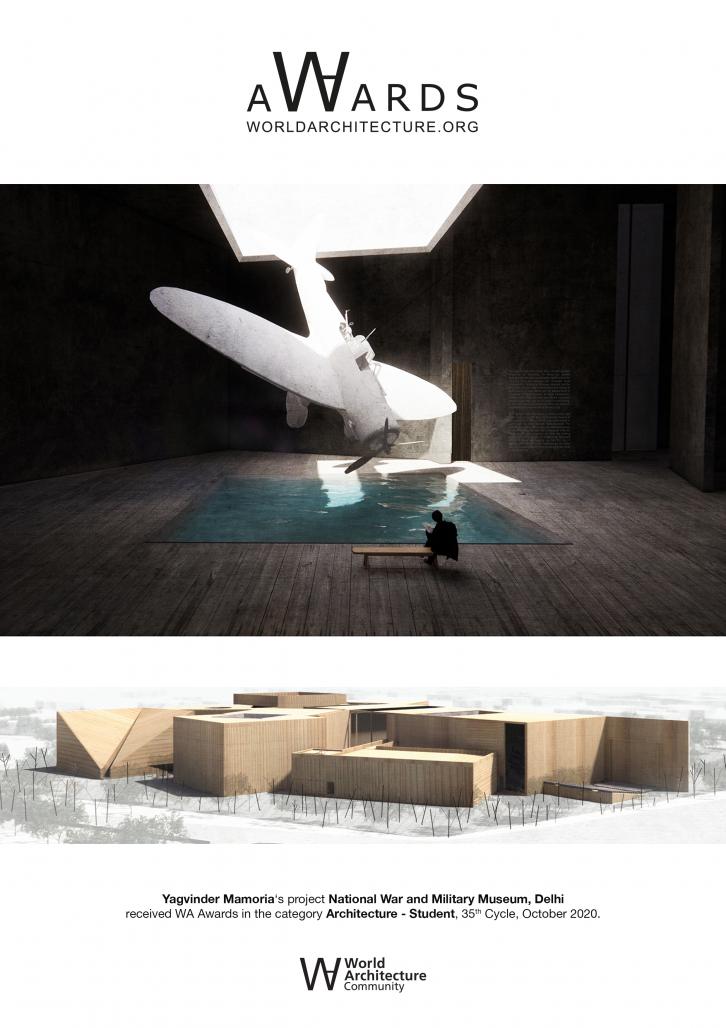