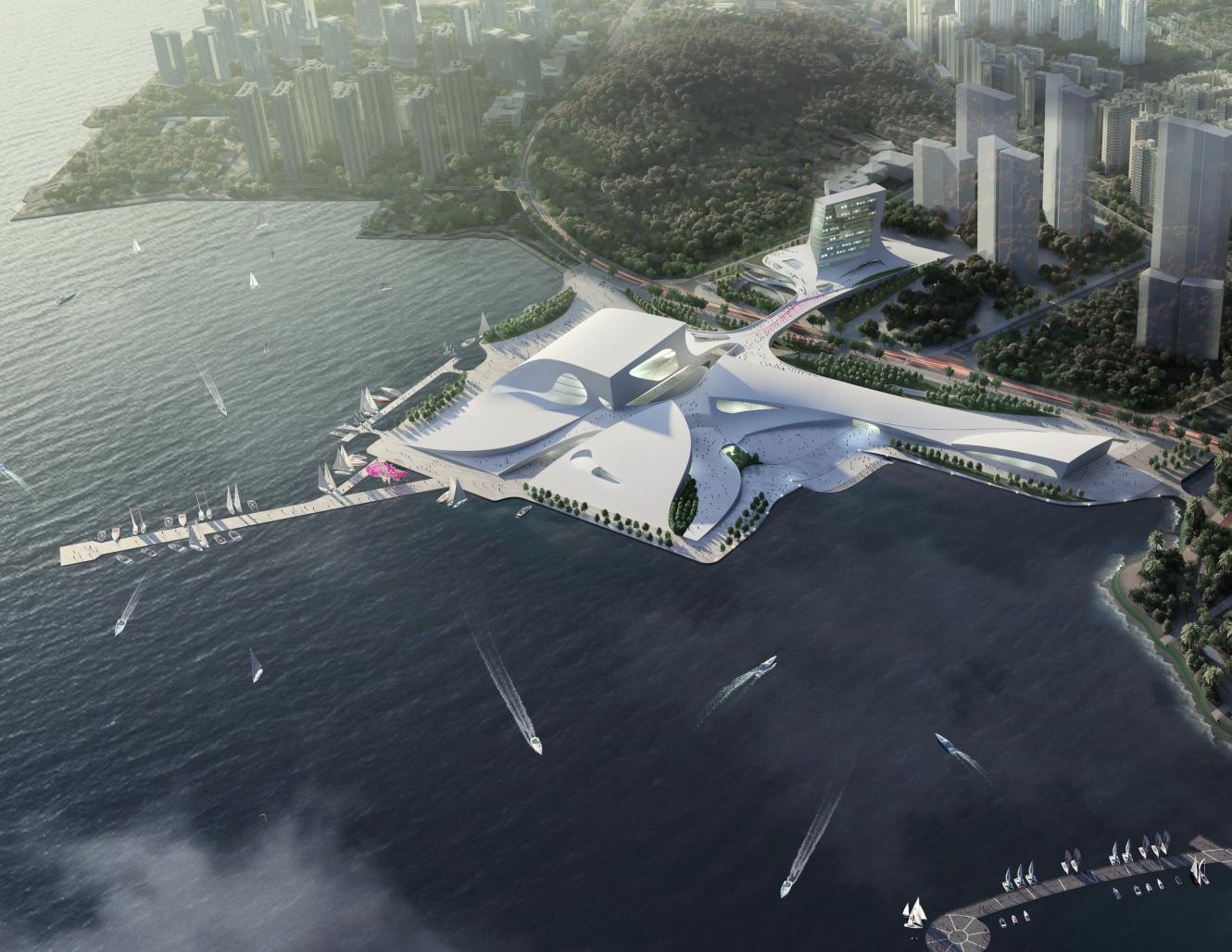 Nowhere on Earth presents such deep history of a near 5000-year-old culture of multi-ethnicity, wealth of commerce, and nature than the city of Shenzhen.

Considered as one of the fastest growing economic cities in the world through the last decade, the new Shenzhen Opera House will position this vibrant place as one of the leading Cultural Centers of the world. The prominent waterfront site is visible both from the neighboring mountains and the Shenzhen Bay Bridge and will act as a cultural gateway to the city from Hong Kong.

Shenzhen has launched the construction plan of ten new Major Cultural Facilities over the next five years. The Shenzhen Opera House is the most important one among them, with an anticipated GFA of 222,000m2 on 2 plots separated by a major roadway. The North plot consists of apartments and offices while anchoring the complex in an urban context. On the south plot, prominently situated on the Shenzhen Bay and surround by water on 3 sides, are the performance spaces which include a 2,300 seat Opera Hall, an 1,800 seat Concert Hall, an 800 seat Operetta Hall and a 600 seat Multi-Functional Theater.

The Performance Halls emerge from the landscape as sculptural forms that are reminiscent of the beautiful bougainvillea petals of the Shenzhen national flower. The large Opera House stands tallest as a beacon to the site that is visible to the mountain and across the Bay and makes an iconic but not imposing statement. The visitor is encouraged to move through and around the site to experience the drama of the landscape. Each person becomes a spectator to art and culture within the building landscape before ever seeing a performance.

THE PERFORMANCE OF NATURE

The dynamic natural processes of the site are heightened and enhanced through a landscape design strategy that calls attention to the distinctive location of the Opera on the Pearl River Delta and the unique natural environment of Shenzhen. Negotiating the physical and dynamic relationships between the mountains and the sea, the landscape performs as an extension of the opera, creating outdoor spaces not only for people to gather, perform, and observe one another, but also to observe and engage the performance of nature itself - the movement of water, the phenomena of atmosphere, and the ephemeral qualities of light.

Conceptually, the Opera House buildings and the site follow regenerative design principles and give more back to the environment than what they take from. The design strategy is to provide a resilient campus that builds capacity for self-reliance and survivability by performing with nature holistically. Patrons of the campus experience water and thermal comfort at different scales on their journey throughout the site.

The Shenzhen Opera House with its integration of buildings, people, park, and water create a dynamic and active place that will be known as the most loved and visited Arts Complex around the world.