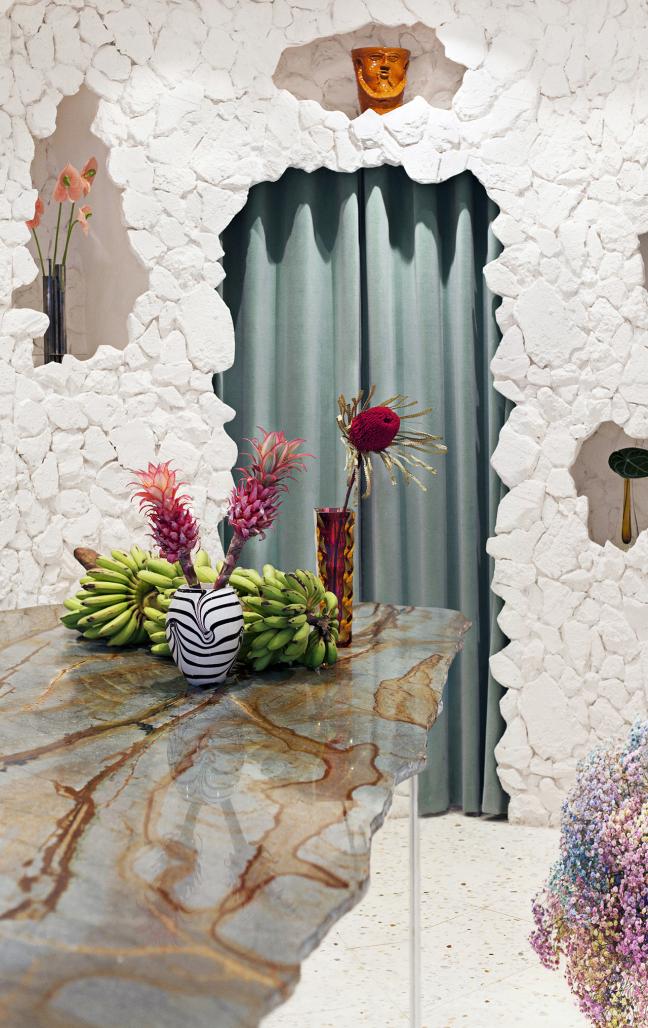 Above all, it is the great originality of the project that deserves special attention. The flowers, the game between the naturalness of the leaves and the artificiality of a boutique of cut flowers are a challenge in essence.
Originally from Honduras, this young New York florist now living in Paris was looking for a setting to match his resolutely graphic compositions. The brief required a double difficulty of interior design : colorful flowers and different species, such as a global chromatic journey (some species from France and others from Indonesia, Ecuador, Costa Rica, South Africa and Cameroon). The intention was to serve them in a simple and chic scenography with character.

One of the challenge was to create a mystery on a plaster panel at the back of the gallery, mounted on a metal structure, which faces the customer. It looks like a wall of white stones. We wanted the client wondering what is behind it. Niches here and there allow vases to be filled with flowers on display while an almond green curtain hangs, closed, in the center of the shop. We thought in particular of the small theater of Twin Peaks, by David Lynch.

We spent time on how to optimize the central space and imagine the functional and aesthetic features of a central counter. In the center of the gallery, Arita works his compositions on a vast Brazilian marble top, which the tandem has broken with a chisel to keep hand-crafted raw edges. Underneath, a cupboard conceals a garden hose, and behind, against the wall, a deep sink in oxidized brass allows you to wash your hands and clean the flowers. Once in beauty, these are presented in the vases. A plaster wall thus hosts rock cavities used to display bouquets of colorful flowers. Minimalized as possible, to let the creations of Arturo Arita express themselves freely. The florist's collection of vases is as well as very eclectic, ranging from contemporary pieces by SOPHIE DRIES to old Murano glass paste, Italian terracotta by Poggi, Gio Ponti, César.
The space was enlarged by a set of mirrors on the walls reflecting the terrazzo floor, and create a unity of space such amazing as the flowers arrangements can do.

The Floral gallery is an amazing project because it claims above all a new vision of retail. A new generation, Sophie Dries and Arturo Arita, 35, are shaking up the codes of traditional floral art.
It is all the more impressive since in just a space of 29m2, it tells of the enchanting plant landscape as a metaphor for real and fantasized nature.
The beauty of this gallery, like the Mannerist caves of the Italian Renaissance, begins from outside and continues inside. In front of the glass window of the florist, you can see the fir trees, cedars, cyclamen and camellias installed on the sidewalk. Then, pushing open the door, on which the double A of his initials triumphs in golden letters.
This gallery tells its own story, to better anchor itself here near the Palais Royal, with the singular and architectural eye of Sophie Dries. It was inspired from his joint visit with Arturo Arita from Villa d'Este in Tivoli, a 16th century residence with several fountains and Mannerist caves. They translate the paradox between real and fantasized nature, as a manner of a floral gallery , "a constructed space which must enhance natural products".
A plaster wall thus accommodates rock cavities serving to display the colorful bouquets. Minimalism as the maximum to allow Arturo Arita's creations to express themselves freely.

This art of work is a reflection of the innovative vision of Sophie Dries and Arturo Arita, as the space enlarged by a set of mirrors on the walls reflecting the terrazzo floor and the large plan in Brazilian marble with rough edges modeled by hand is offered to the surprise of customers.
Arturo Arita's bouquets are displayed in niches and lit with pyrite lights. Elsewhere, it is a basin decorated with vintage taps in the shape of turtles and André Arbus sconces which give an Art Deco atmosphere, so dear to the florist.
This innovation is also perfectly reflected in the experience of this setting. In France, customers often operate “by the boot”, buying the same variety of flowers in several units. The scenography of the space allows customers to compose and move towards a mix. In a micro-boutique, where the most pleasant is to stroll and admire, as we like to contemplate paintings and sculptures in art galleries. Sophie Dries creates an interior design since the design has to forget itself ,to highlight flowers and the compositions, like artworks.
Through radical and playful arrangements, she designs a series of plaster white plinths which, through their varying sizes and heights, can modulate the space and create a most enchanting plant landscape.
If the time pushes to favor local and seasonal flowers, Arturo Arita takes on the contrary a global chromatic journey, with the greatest respect for our planet, where everything is done with just moderation. Sophie Dries signs one of her obsessions with oxymoron design and her passion for constantly experimenting and reinventing craft traditions in a timeless and borderless interior design.

How a delicatessen space can be transformed into a scenographic flower gallery for Arturo Arita in Paris ?
The French designer and architect SOPHIE DRIES reimagines a lush setting inspired by the Mannerist caves of Italian Renaissance. Her poetic inspiration is Arturo Arita's eclecticism, originally from Honduras, he grew up in New York City before moving to Paris, where he became fascinated by the exotic flowers that flourished in botanical gardens. His focal point of the Art Deco in many arrangement echoes to the baroque fantasies to amalgamate mineral freshness, mirrors and modest contrasting textures to serve the oeuvre.