---------------Intro---------------
Most of us have rigid notions of what one’s place of work should be like and how it should differ from one’s home. Is a middle ground possible? Architect Niraj Doshi’s place of work demonstrates just that. Read on to find out how…
-------------------------------
Architect Niraj Doshi founded Niraj Doshi Design Consultancy (NDDC) in 2011. His vision to build a vibrant design organisation also included the involvement of dynamic international partners. The office is located in the heart of Pune city in Narayan Peth.
The NDDC office was conceptualised as a place that would combine the best of both worlds: work and play. A place that would contain within itself the disciplined atmosphere of an office and the relaxing ambience of home. In keeping with this concept, it consists of two zones: a Formal Indoor Space that facilitates solitude and mental concentration and an Outdoor Design Studio, which is an alfresco, partially covered, and landscaped space facing the north, to be used as an informal workstation. It is a place conducive both to creativity and camaraderie, a place where work automatically becomes a joy to be shared with others.
Initially, the Outdoor Design Studio was an ordinary terrace, the extension of an office space that had been sublet. The creative minds at NDDC soon realised the potential of this space and converted it into what it is today.
Here the Principal, Architects, and Designers, as well as Interns, can work together, which can be a learning experience in itself. Sustainability is the principle on which this space has been designed and on which it functions. Most of the material used here is amenable to reuse as well as recycling and the whole area is awash with natural light and different hues of green in the potted plants. The use of solar power means that much reduction in the carbon footprint. The Outdoor Design Studio is both a cool and comfortable place on account of its canopy resembling a fishing net and the mist system which reduces the ambient temperature by about seven degrees Celsius.

As one enters the Outdoor Design Studio, one can easily make out its sub-division into two parts: an area of workstations on the left and an informal seating arrangement on the right. While the workstation has rows of portable computers (laptops) for the designers and architects, the informal seating area has a comfortable sofa-set and a centre table at the extreme right for meetings and discussions or just a refreshing cup of tea or coffee.
The roof over the Outdoor Design Studio is divided into two parts: an inward sloping part to collect rainwater run-off and a skylight to illuminate the main passage as well as space below. The ceiling is mostly made of jute strings to ward off heat as also to add to the informal look of the whole space. The open façade on the northern side offers protection against the elements in the form of a net and bamboo (also known as “chick”) curtains. All the material used here is locally available and makes for very natural-looking surroundings.
Wherever possible, the emphasis has been laid on reuse and recycling of old material and imaginative fusion of structural members and feature elements. For instance, the wall units on the front wall initially served the purpose of mounts for exhaust fans but now make for adornment. Multiple floor levels created below ensure unobstructed flow and channelling of stormwater. Such levels also make the workplace an interesting place, conducive to one’s creativity.
Equally worthy of mention are the workstations and the round table in the Outdoor Design Studio. Both have been designed and manufactured in-house as a part of the NDDC’s product design expertise. They embody simple and clean lines and smooth finishing.

The Indoor Studio, on the other hand, offers a striking contrast to the Outdoor Design Studio both in terms of its ambience and design concept. This area of NDDC is used mainly by the Principal Architect and it has all the modern amenities.
As one enters this sanctum sanctorum, as it were, one is greeted by a wall displaying the photographs of the great luminaries of the world of architecture, from Le Corbusier to Balakrishna Doshi, to name but two of them. Each of these frames contains the most famous quotation from each of these stalwarts. And then a surprise awaits the visitor. What first appears as the wall displaying these photographs is actually the door to a bibliotheca that contains the books written by these renowned architects: architectural wisdom arranged neatly in rows.
Both the centrepiece and the centre of attraction here is a fabulous cantilevered and contoured wooden table. It gives one the impression of being a part of the floor as if it has risen up from it like a wave in an ocean. The mushroom-like shape of this table, a part of NDDC’s Philip Signature Table Series, further adds to its novelty.
The Indoor Studio is also sub-divided into two zones: a formal area containing the table mentioned above and an informal one with a sofa-set. The false ceiling here is made of wooden patti detail, forming strong lines and a sense of direction. The floor also follows the theme of straight lines and is made of recycled plywood leftover from interior décor done at different sites. The walls are predominantly white, thus offering a contrast to both the floor and the ceiling. The whole space is redolent of warmth and cosiness.
‘Transformation of space’ is an important feature incorporated as presentation panels for meetings. When not required, these can be folded and put away.
Like the bibliotheca, there is another surprise for the visitor in the Indoor Studio: a window set inside the wall which, when shut, looks like a small cupboard. Once opened, it offers a panoramic view as far as the famous Parvati (a historic hillock in Pune) and also serves as space where the Principal Architect can work.
To sum up, NDDC’s office efficiently demonstrates how the formal can be fused seamlessly with the informal, adding to the efficiency and enthusiasm of those who work there on a daily basis. 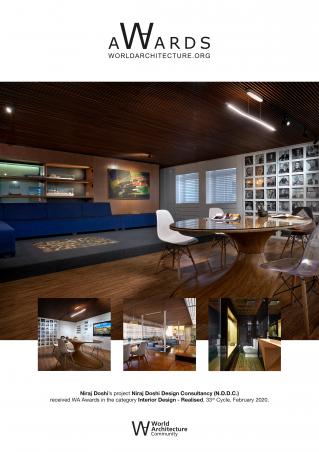