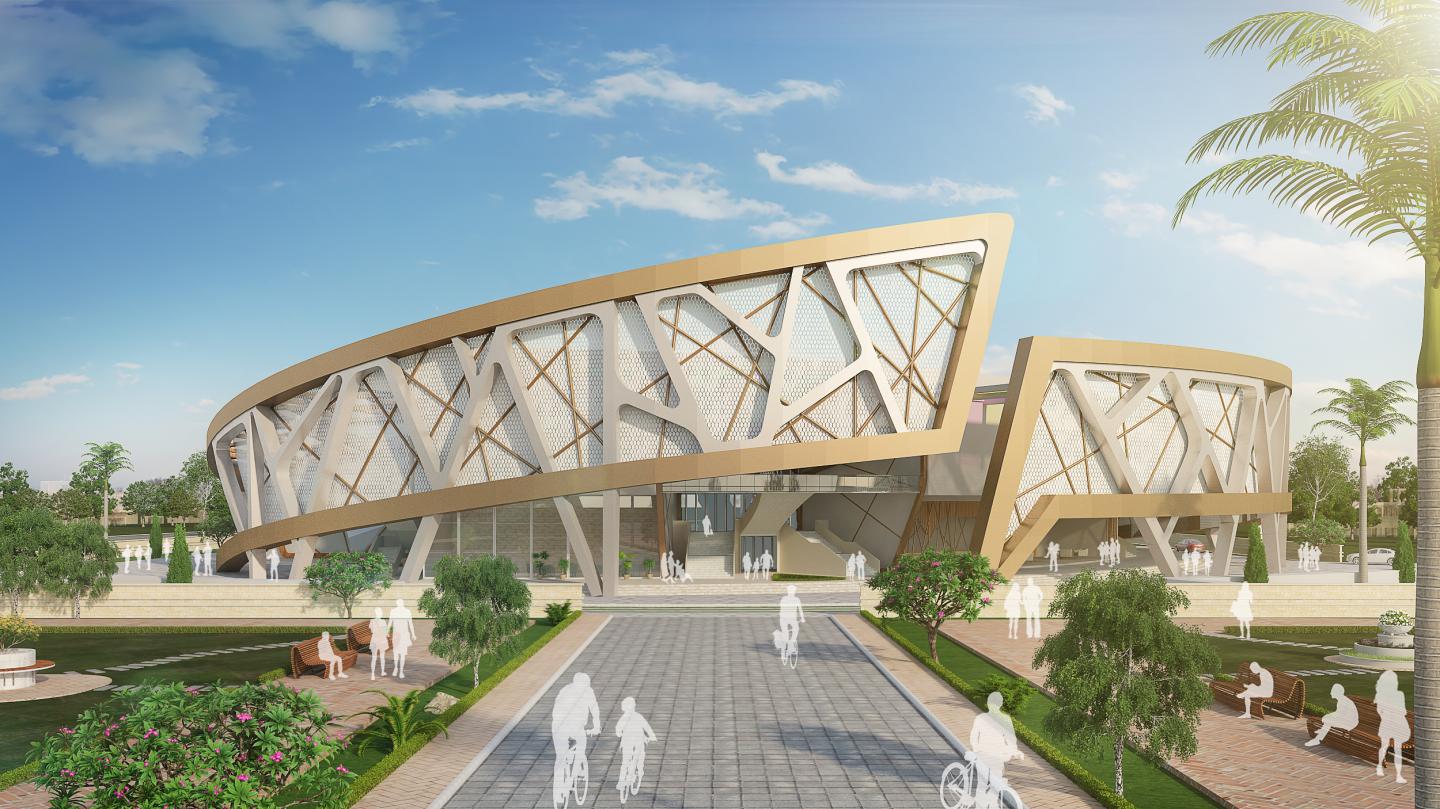 The form of the auditorium was conceptualized on the idea of a “shell within a shell” which flows with the green – thus the built form originates from the landscape and takes a dynamic approach. Numerous semi-shaded public spaces and greens, along with an amphitheater have been incorporated within the design to club together with the cafeteria, which provides warm and comfortable spaces for students to enjoy.

The project displays a balance between the openness of the built form and the massive footprint of the auditorium by giving cut-outs and semi-open corridors which overlook the outer greens and act as a circulation space for easy access from all sides, while also creating gathering spaces for students at regular intervals. The mesh of colorful and tinted glasses as roofing in the corridors as well as the façade create a play of light and shadow, thus generating interest while also allowing diffused light to enter the building. As said by Kahn, “A light casts a shadow, and a shadow becomes light”.

The broad objective of the project is enhanced space utilization in terms of multiple users in a single large span structure - yoga hall, meditation, rehearsal area, auditorium, sports arena with supporting areas like the cafeteria. This also posed a major challenge while designing as the arrangements of the spaces had to be done in a way that the auditorium could later be converted into indoor badminton or basketball courts with temporary seating arrangements. The plan form was thus conceptualized with a maximum angle of vision for spectators from the side aisles, and was executed accommodating 6 badminton courts when replaced over 1500 temporary seating.

Auditorium, as an architectural space is a wholesome package of visuals, structural and acoustical parameters as well as a large space and volume. The objective of this project was to create a 'state of the art' indoor auditorium cum stadium of a capacity that could hold 5000 people to accommodate various functions such as convocation, graduation, indoor sports and conventions inside the campus of Anna University, Tamil Nadu. Situated on a site measuring 5.94 acres with abundant existing greens, the idea was to visualize and bring to life a building that responds to its surroundings and blends within. The proposed auditorium is a multi-purpose building with both badminton courts and smaller meeting spaces that are adaptive in nature. Other ancillary features include a Gym, Squash room, Cafeteria, Yoga and Meditation Hall, Passive recreation, Outdoor entry, NSS, NCC, Music, Cultural, Hobby rooms.

To reduce heat gain, a double-layered facade with aluminum cladding has been introduced in the design with a mesh layer on the inside. Various design elements like pergola and sun-shading in the form of contemporary jaalis, especially for south shading have also been incorporated throughout the building structure to reduce heat gain, increase the permeability of light and to minimize the dependence on artificial lighting sources. As a means to use non- conventional energy means, solar panels have been introduced on the roof to make the building sustainable. Local materials like bamboo and wood panels have been used in the structure, helping the structure respond to its immediate surroundings and blend with nature.

The overall circulation of the site also takes into account the segregation of vehicular and pedestrian movement, as well as a different VIP entry. Reducing the road area and maximizing the pedestrian and cycle movement within the campus is aimed at making it walkable and easily approachable for the students. These include a cycle track throughout the perimeter of the site to encourage an eco-friendly mode of transport connectivity.

Since Chennai experiences a higher level of humidity, the design of the wide span structure of the auditorium was modified to introduce openings at the roof level for hot air dispersal keeping the auditorium cool and putting passive techniques in use. With the aim of maximizing the natural light, lightweight tensile skylights also have been opted for with double seam aluminum sheeting for better insulation.
This project is a milestone in designing built spaces which promote flexibility of uses, while also creating an iconic design statement.