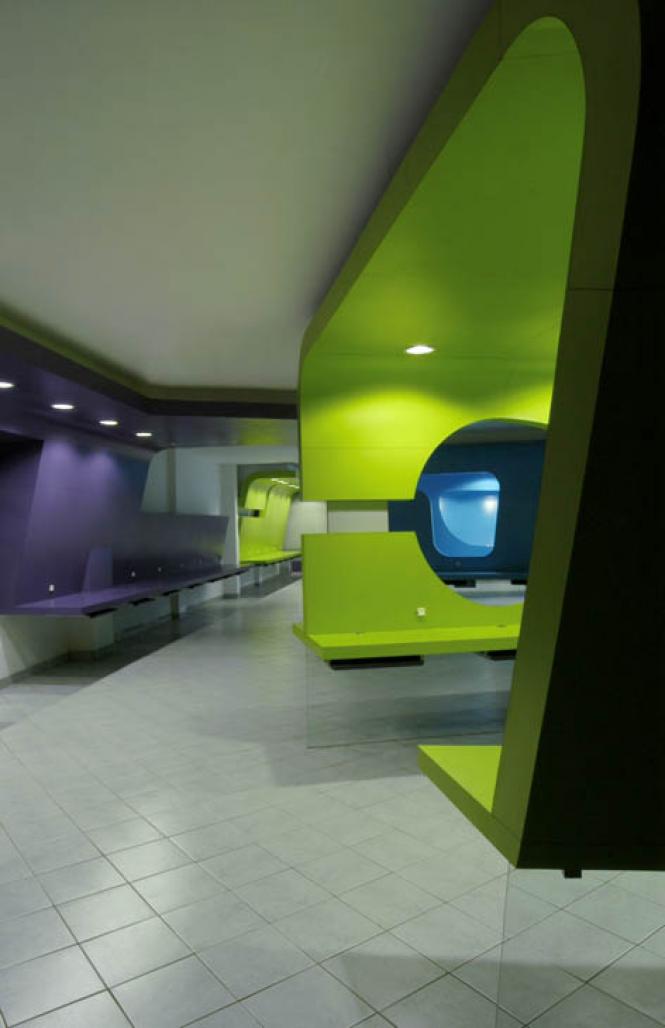 Wrap-3 refers the chronology of the projects, in which the architects have employed the concept of ‘non-hierarchical tectonic imagery / strategy’ in their projects.

The space is conceived as a series of wraps, juxtaposed to create overlapping palimpsests of color, spatial overlays and derived / accidental ‘readings’.

The target group (Students of Primary & Secondary School), made the design process lean heavily on child perception, creating a wholly informal teaching environment that they could relate to.

The cut outs on the wrap are ‘corrected’, intuitive, childish doodles that double up as a ‘crawl / graffiti’ on the wall as well as an integral architectural element / iconography

The design veers away from the dogma of ‘rational modernist’ approach for a design process, which favors accidental discoveries / encounters as much as the rationally / theoretically derived spaces.


The design, in part deals with the dichotomy of perception – On the higher level it is the simple reading on the plan Vs a highly complex ‘three dimensional construct’ and at the basic perceptive level as a continuous changing ‘spatial kaleidoscope’ generating unique spatial compositions with every changing position in the space. Each encounter with the space is a discovery, prodding the young minds to search for more.

The colors, which mark the different domains in the matrix, have been carefully chosen to generate brilliant overlays. It also gives each domain a territorial character, which is vital in designing spaces for children.

The whole mass is anchored from the top, leaving the entire space clear of any visual obstructions at the floor level. The work stations on either side are divided by 12thk clear float glass at the bottom resulting in a levitating spatial matrix.

Besides the inventive architectural approach, the program tackled the cost effectiveness as the very fact that it was designed for an orphanage. So was the recurring maintenance cost, and the artificial lighting was restricted to the most essential as the centre is operational only during the day time