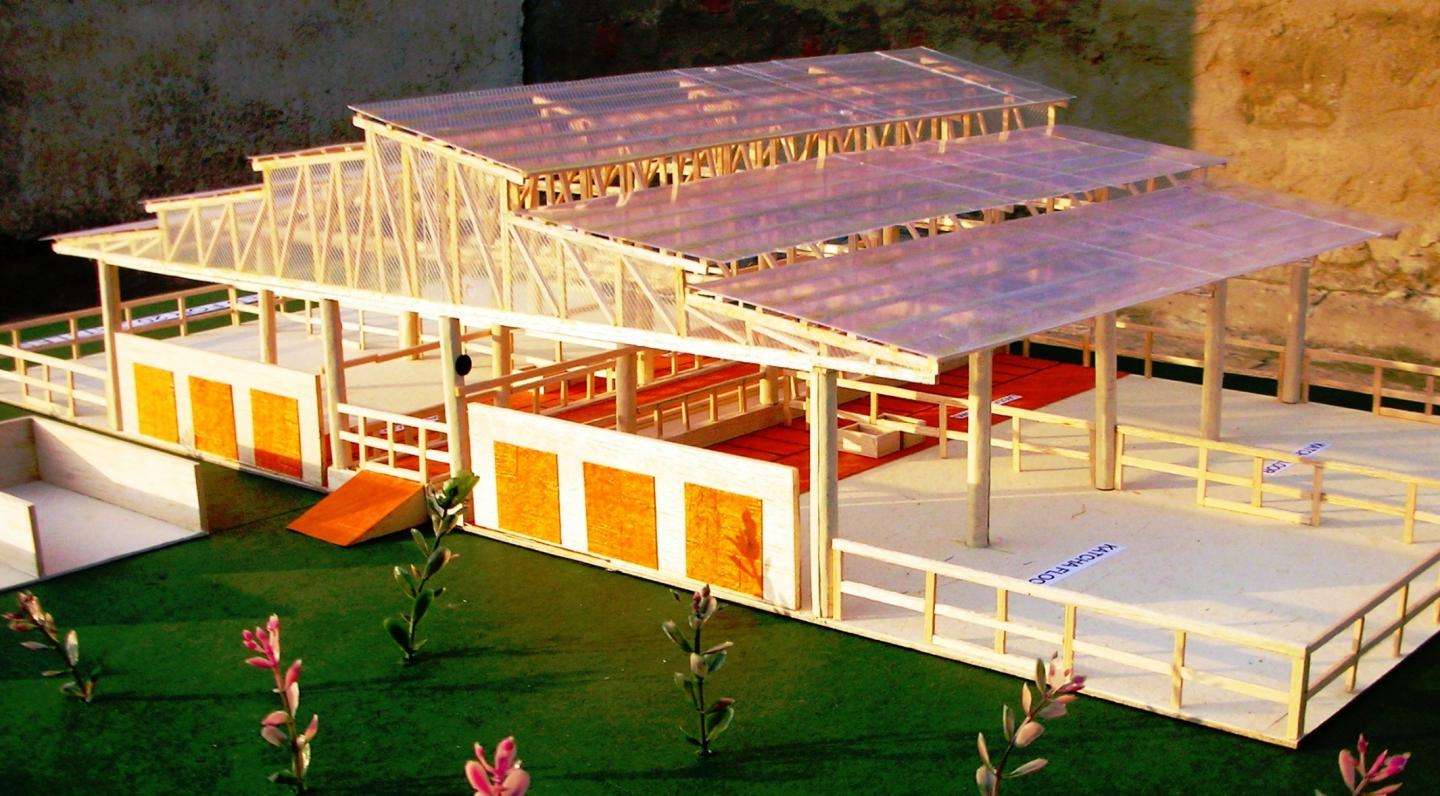 Punjab is an agrarian state and milk production as an integral part of agriculture which is now emerging as an independent occupation in itself. Being located in North India, Punjab experiences very hot and dry winds in summers, cold chilly winds in winters and very hot and humid climate in monsoon season. The extremes of the climate affect adversely the health of lactating cattle and their milk yielding capacity. Since the dairy farming has the potential of a profitable business, it becomes outmost essential to protect the cattle from the vagaries of weather. Punjab has thus felt the need of such cattle houses which can fulfill this need.
Due to peculiar climatic conditions in the state, it was not feasible to import and adopt some existing model of cattle house from else where, rather it was required to evolve an exclusive model in consonance with local conditions. The architect, who himself belongs to a farming community and well verse with ground realities, was entrusted the job of evolution of suitable model for this. Top experts from the Punjab State Farmers Commission, Punjab dairy Development Board, Guru Angad Dev Veterinary Sciences University, (GADVASU), Ludhiana and the representatives of Progressive Dairy Farmers Association of Punjab were actively involved in the process. After series of meetings and brain storming sessions with these experts, the architect was able to evolve a suitable model for the cattle house. The model was then displayed in a Cattle Fair in GADVASU, Ludhiana for educating dairy farmers. Number of prototypes of the model was actually constructed at different places for demonstration and benefit of farmers. A small brochure of the model (in local Punjabi language) highlighting the salient features and estimates was published and thousands of copies were distributed free of cost to the farmers for their self help.
Two designs of the Cattle Houses were prepared. One for 20 lactating cows which has actual capacity of 40 cattle i.e., in addition to 20 lactating cows there is space for 10 pregnant cows and 10 heifers. Likewise the other design is for half the capacity i.e., for 10 lactating cows along with 5 pregnant cows and 5 heifers.
The design for bigger house has been evolved on the concept called “face to face”. In this case there are two linear mangers running parallel to each other and the cattle stand face to face on both sides in two rows. A 2.15 metre wide brick paved path runs in between two mangers for easy movement and convenience in putting fodder in the mangers on both sides. Apart from this, the arrangement facilitates easy inspection of cattle from medical point of view. Cattle enclosures has been bifurcated in four parts, each earmarked for different category i.e., high yield lactating cows, low yield lactating cows, pregnant cows and heifers. These enclosures have been created with mild steel round pipes for economy and to avoid sharp edges which could injure the animals. Cows can move freely in their respective enclosures, sit either in covered or open area depending upon the climatic conditions. Water troughs with stop valve arrangement have been provided at appropriate locations so that cattle can drink water whenever they feel like. The enclosures have largely been kept kutcha with sand filling. Only 4.00 metre wide strip along the manger has been made pucca with brick-on-edge flooring. A system of automatic showers and high velocity fans has been installed above the feeding point. This system runs automatically for 3 to 6 minutes at feeding time to bring down the body temperature of cows by evaporation.
The design of the shed has been evolved keeping in mind the factors like climate control, economy, and easy execution to facilitate self help construction. Since the high yield cows have their origin in cold European countries, it becomes the prime concern to protect them from scorching heat of long summers in this region. The height and depth of the shed has thus been kept deliberately more to achieve cool interiors. Cross section of the shed affords number of clerestoreys which facilitates adequate cross ventilation. The hot and light air underneath the ACC sheet roofing gets exhausted upwards through these vents attracting cool and heavy air from the vegetated surroundings at lower level. The convection current thus created helps to combat the summer heat significantly. Sheds are oriented in north and south direction with gable ends on east and west directions. North side remains cool through out the year, and the high southern sun is effectively cut by roof overhangs. East side has been left open as the morning sun is always welcome. To cut off the low western sun, brick-jalli screens have been provided on this side. It is also proposed to plant thick vegetation on the western side. The model has the potential of expansion in a linear way depending upon the requirements of the farmers. These cattle houses have been successfully implemented at number of places and it is expected /intended that progressive dairy farmers shall follow this model on their own. With more and more farmers adopting such scientific techniques in dairy farming, it is sure that Punjab will be heading for another “White Revolution”. The architect feels privileged to be associated with such a prestigious project and making his own modest contribution to agriculture through architecture.