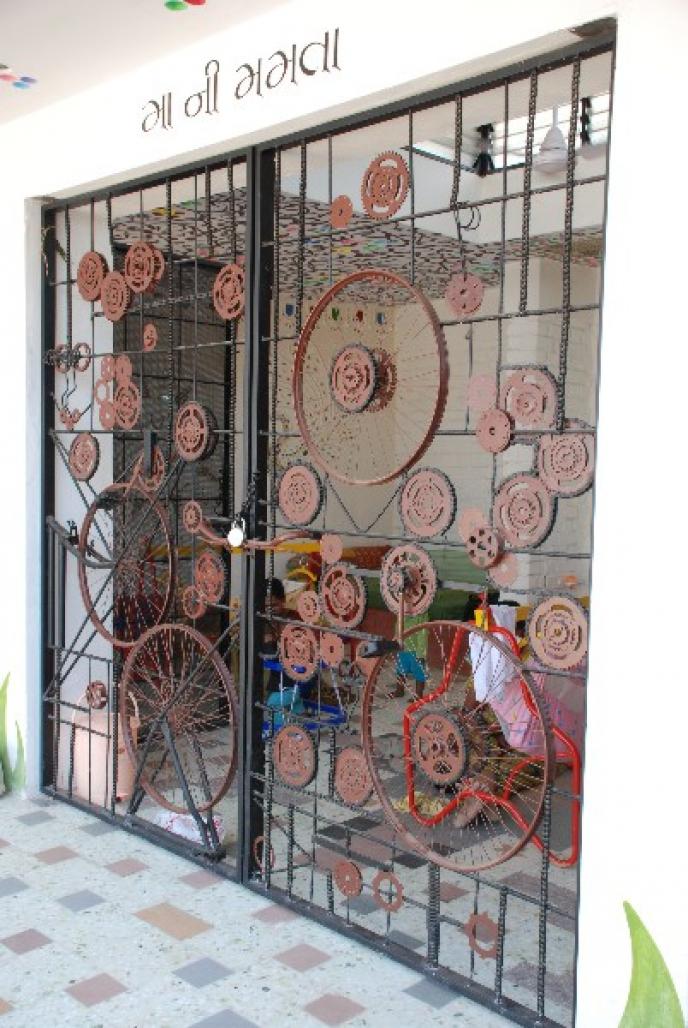 Manavsadhna crèche: Revisiting the Recycling
Manavsadhna is a social NGO that engages in the service of humanity. Addressing the issue of educating while employing the slum children, it created an activity centre in the middle of squatter settlement which operates as an informal school in the morning. Afternoon it trains the youth with vocational skills for better employability. Evening it transforms into community centre with sports, leisure, gymnastics as well as social gathering. This multi use centre was created as a demonstration of the indigenously developed and locally produced building components created by recycling the domestic and municipal waste. This meant reduction in waste thrown thereby reduction in environmental pollution. Employment and empowering of the urban poor as value addition processes of converting waste into building components create economic opportunities without needing capital intensive, mechanised or centralised production setup. The building components thus produced are, cheaper and better performing than the conventional alternatives readily employed, as a result their housing can also become affordable and better in quality.
In an adjoining plot another centre has now been added for the purpose of crèche. Young children in slum areas have problem of being looked after through the day when both parents are out at work for earning livelihood. Manavsadhna crèche is identified as an answer to this very critical issue. The locally employed women serve as ‘nanny’ through the day to couple of dozen slum kids. The place functions as a cradle house, play area, nursery school as well as community facility centre for bathing and personal hygiene of young children. It also has a provision for overnight stay of the volunteers.
The place is essentially conceived as a traditional khadki- a residential precinct with closable courtyard to which all peripheral spaces open. The courtyard door, if open, makes the campus externally oriented to interface with street, while by choice if shut can make it introverted yet outdoor space where young children can safely play and rest without noise. Mothers get their privacy while breastfeeding. So it becomes a versatile place where indoors spill outdoors and outdoors translate into an open room. Fully openable pivoted doors to the room mark inside to outside transition seamless. It also offers the choices of scale and type of spaces to adopt by activities, seasons or the time of the day. Room walls essentially are the retaining wall structures to the adjoining plot which occur at the higher levels. The roof’s flat plane, as terrace, becomes the natural extension of the ground at the upper level to neighbouring plot. Pyramidical translucent roof pavilion on the raised central slab becomes the stage for outdoor social events of the activity centre.
The built spaces get insulated from at least three sides by earth mass or the adjoining structure while the fourth open to deep veranda space. Brick piers of the peripheral retaining walls get consumed as storage voids. Deep seated perforated shutters of the rooms work as inlets of cooler air through shaded veranda while raised central bay provides for escape chimney through glazed ventilators and hence, natural cross ventilation. Skylights on the edge walls wash off the light on wall planes to bring in illumination without a glare of the direct sun. Stained glass bottles embedded in the slab also serve as the same.
In continuation of the explorations for the recycling of waste at Manavsadhna activity centre, here at the crèche the experimentation is done with the palette of waste material found from the other construction site. Some one’s waste becomes some one’s resource. The walls are made out of the fly ash non burnt bricks which is stronger and cheaper than the conventional burnt clay bricks in addition to them being pollution friendly by using the thermal PowerStation’s waste. The flooring is a creative collage of ra