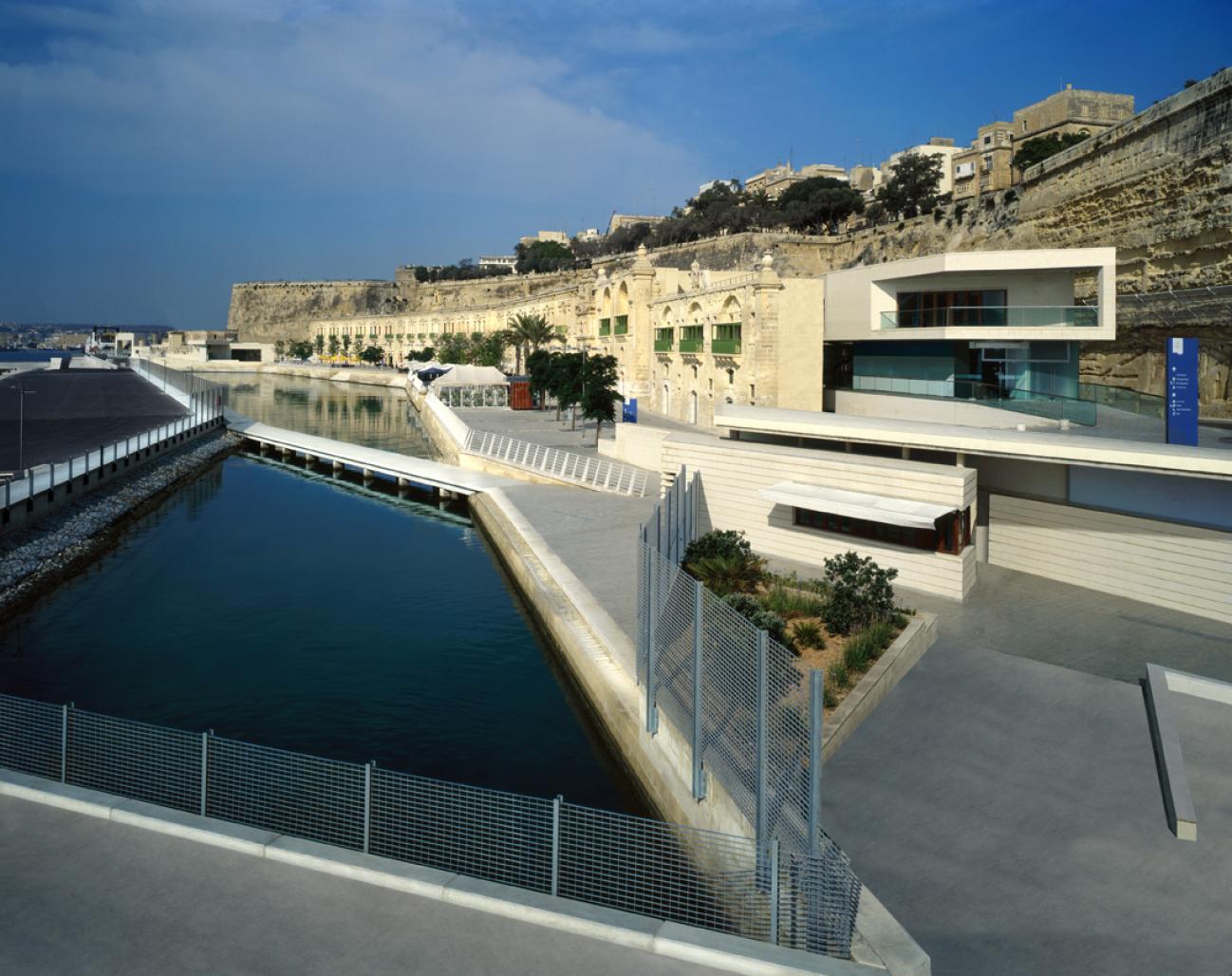 The rehabilitation of the waterfront at the foot of the landward bastions of the sixteenth century bastions of the city of Valletta, together with the construction of the new Cruise Liner Terminal on the site that for centuries served as the landing place for all sea faring passengers arriving in Malta, adds a further historical layer to the existing urban fabric outside the walls of the town. The project takes its inspiration from the harmonious scaling down of volumes that was created during the 17th and 18th centuries, years that saw the transformation of Valletta from a Renaissance military town into a centre of trade and commerce. During this period, the streets of Valletta were paved, gardens planted on the bastions and the infrastructure of the harbours improved with the construction of rows of Baroque stores at sea level. This latter addition, symbolic of the hegemony of the Order of St. John of Jerusalem, contributed to the creation of the traditional image of the harbour in the collective imagination, and was immortalized in an exceptional iconography of paintings and photographs.

Since the advent of air travel, the function of this site, once throbbing with the maritime energy typical of Mediterranean harbours, became obsolete. The destruction of three bays of Pinto Stores during WWII signalled the start of the decline of the area, the historic buildings falling into disrepair and the original relationship of the buildings and the sea irrevocably undone by the extension of the quay during the immediate post-war period.


The rich historical context of the site determined that the construction of the new cruise liner and ferry terminals at either end of 18th century Pinto and Forni Stores should provide a neutral foil to these Baroque masterpieces, the restoration of which formed an integral part of the project. This was resolved by sinking the new buildings below the main public concourse, thus separating the main pedestrian traffic from the influx of cruise liner passengers. These considerations of a strictly conservation nature, however, were also aimed at reinventing an abandoned urban space, once considered to be the gateway to the Orient, in such a way as to catalyze a vibrant urban life complementing that taking place inside the walls of the town.

The scheme grew out of the movement requirements and flows of the site.
The new buildings, that are conceived simply as stone envelopes that house and generate these flows, are built in such a way as to blend, in terms of materials, colour and textures, with the newly restored historic buildings and the bastions serving as a backdrop. The main concourse is similarly paved in order to create the effect of a vast stone carpet at the foot of the stores, rising up to roof level of the terminal and integrating the buildings, sculptural games of mass and fluidity, with the landscape. Ramps and steps are carved out of the limestone mass and develop into buildings and urban spaces. The intervention thus allows the main historic buildings to be read in isolation and independently of the new buildings from strategic points of view while the interaction of the new architecture with the old adds a new and fascinating dimension to the area.

The new architecture also articulates the transition between the rigid angularity of the bastions and the streamline forms of the equally giant-scale liners. It provides the visitor, whether arriving by seaplane {which takes off from here to tour the islands}, by boat, car or on foot, with an alternately grand and intimate scenography, faithful to the role played by the grandiose facades of the stores in past centuries.

The vehicular road {originally at the water’s edge}, was removed to the back of the stores, freeing this new pedestrian zone to become a new point of social intercourse for the town, flanked as it is on one side by the sea, and on the other by the recreational and retail facilities housed in

Cruise Passenger Terminal by Architecture Project in Malta won the WA Award Cycle 4. Please find below the WA Award poster for this project.